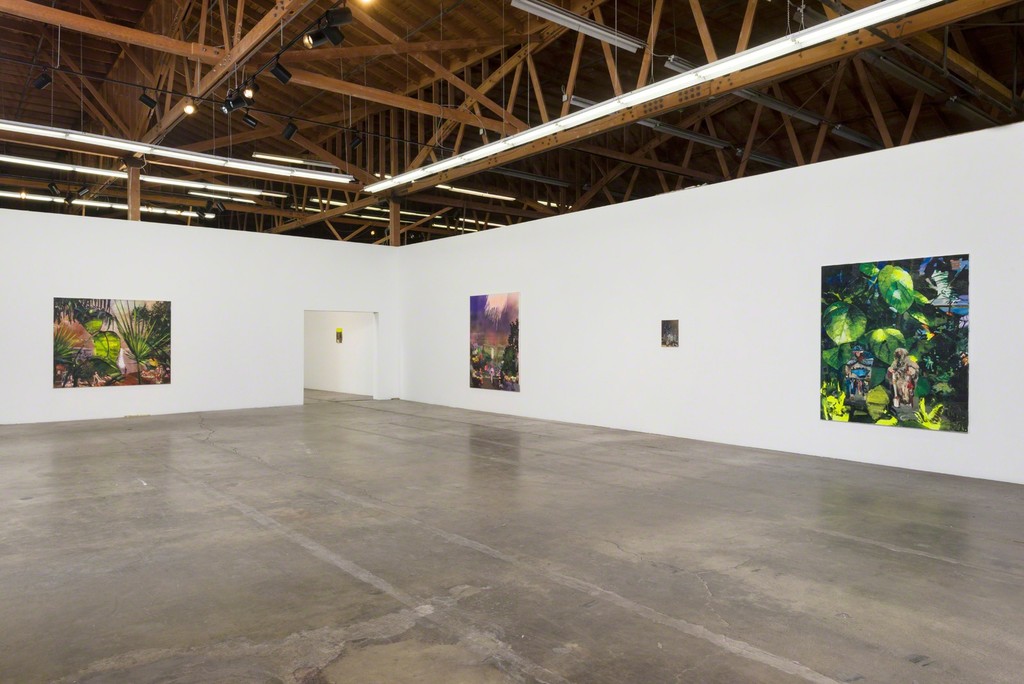 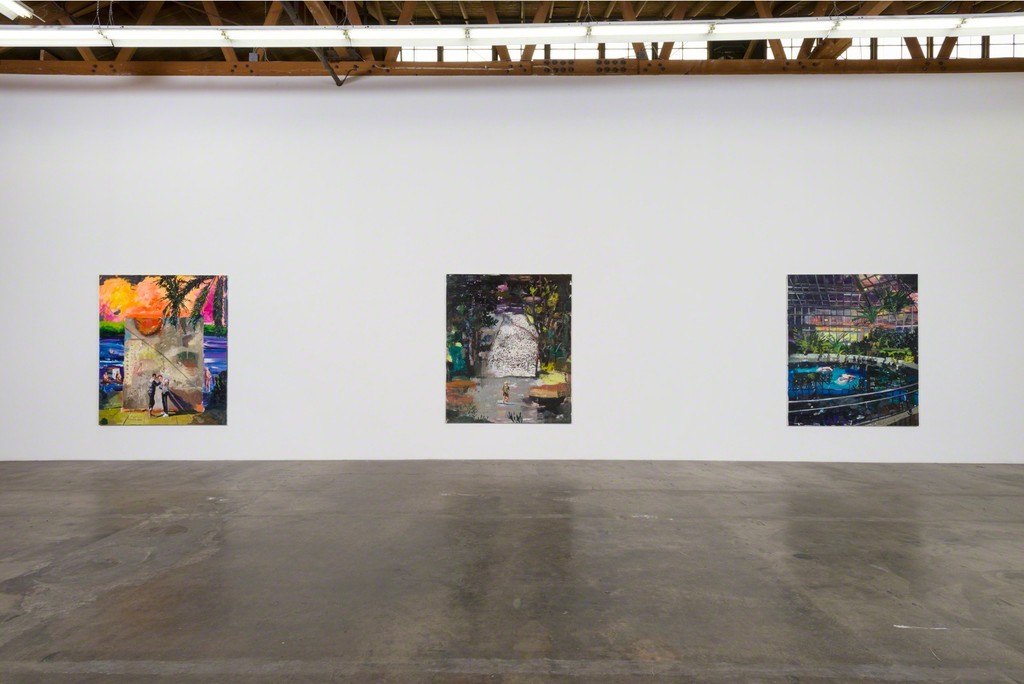 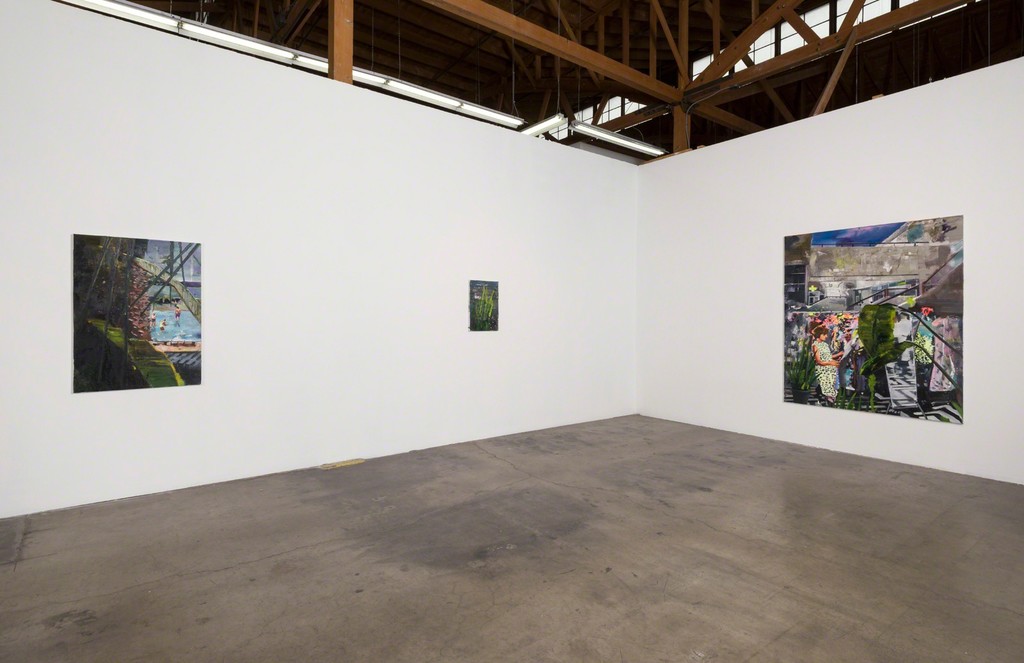 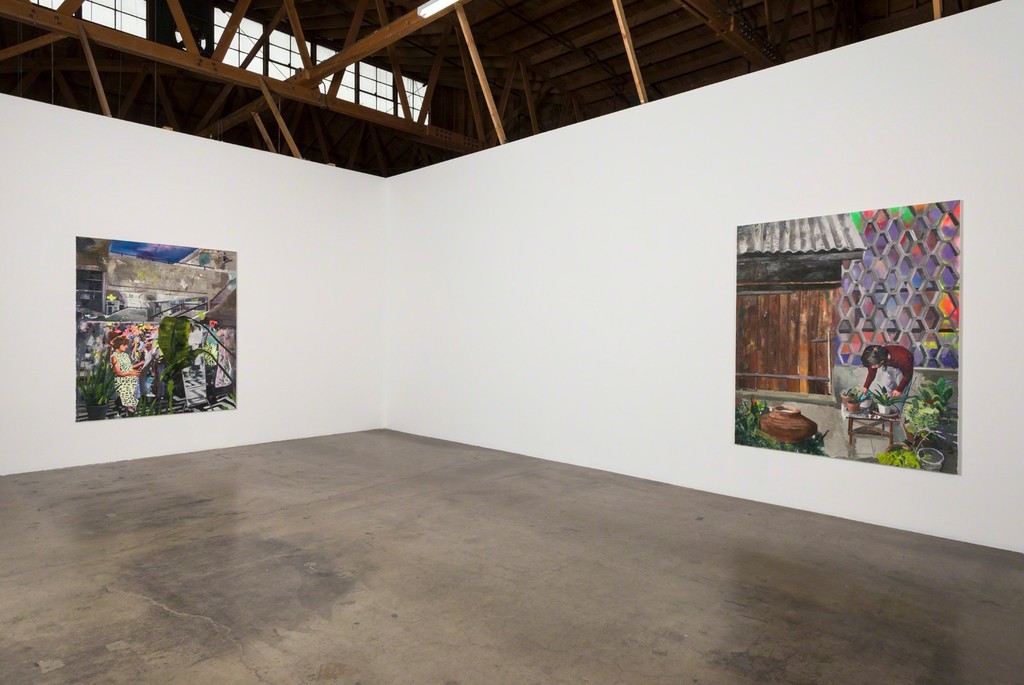 For this new body of work, the artist expands his subject matter well beyond the depictions of Romanian landscapes and nostalgic scenes that he is best known for, broadening the scope of investigation recorded onto the canvases to include commentary on the global state of affairs, internal dialogues about authentic identity, and ruminations on the overbearing excess of utopian rationality as expressed through constructed environments. While elements of previous bodies of work still remain integral to this new series, most evidently his use of figures amid architectural features, Bercea allows these paintings to transcend locality.

Informed by the dramatic shift from a longstanding communist rule to a capitalist consumerist system he experienced while growing up in Cluj (located in the Transylvania region of Romania), the paintings on view point to an internalization of the signs and tendencies of two opposing aesthetic regimes. As the disparate dichotomies converge on the canvas, they produce a wholly hybrid territory that moves beyond identification with geographic space. Instead, the paintings act as dialogical platforms where Bercea speaks to the cacophony of contemporary life, where vaguely reminiscent architectural motifs are draped in the tattered vestiges of mid-century modernist ideals, and scenes are overrun with the exuberant entropy of vegetation. Here, Bercea presents a postmodernist Arcadia where a sparse population of nondescript pastoralists commiserate among morose landscapes and overzealous flora. These convoluted signs obfuscate any association with any real locale. It could be anywhere and nowhere.

Although the paintings speak to the transnationality of cultural modes, Bercea’s imagery is still grounded by the paradigmatic ruptures he witnessed in his native Romania. As such, the paintings are a result of an agglomeration of memories, personal documentation, and fantastic landscapes inspired by lived experiences that are woven together to portray a placeless reality that exists only in the picture plane. The flashes of luminescent colors that abound in Bercea’s work serve to reinforce this mystique. The brilliant strokes of neons jut up against austere purples and fiery reds. At the same time, the presence of dark earth tones tempers this vitality as the ominous greens of the shrubbery pull away from the magical and plant the scenes in an abstracted realism. These
contrasting color profiles alongside the concrete greys lends to the artist’s unique ability to forge lived-in worlds. Bercea places the viewer square within this distopic landscape, often as a voyeur behind robust foliage. This visual layering is compounded by the physicality of the vacillation between thick impasto application of oil paints and the fluidity of washes of pigment streaking across the compositions. As the colors and textures crash into one another, the materiality of the works draw away from an internal logic and reveal Bercea’s investment in the tradition of painting.

Marius Bercea (b.1979) lives and works in Cluj-Napoca, Romania, where he is a professor at the renowned art and design university.Recent solo exhibitions include Hypernova, Blain|Southern, London (2014); Concrete Gardens, François Ghebaly Gallery, Los Angeles (2012); Remains of Tomorrow, Blain|Southern, London (2011); and Time will Tell, Chungking Project, Los Angeles
(2009). His work has been included in numerous exhibitions, including Young Collectors 2, Elgiz Museum of Contemporary Art, Istanbul (2015); Love: The First of the 7 Virtues, Hudson Valley Center for Contemporary Art (HVCCA), Peekskill, US (2015); Defaced, Boulder Museum of Contemporary Art, Boulder, US (2014); Hotspot Cluj – New Romanian Art, Arken Museum of Modern Art, Denmark (2013); Nightfall, Modem Centre for Modern and Contemporary Arts, Debrechen (2012); No New Thing Under the Sun, Royal Academy, London (2010); and the Prague Biennale 4, Prague (2009). His work is a part of several public and private collections, including the Hudson Valley Center for Contemporary Art, Peekskill and the ARKEN Museum of Modern Art, Skowej.