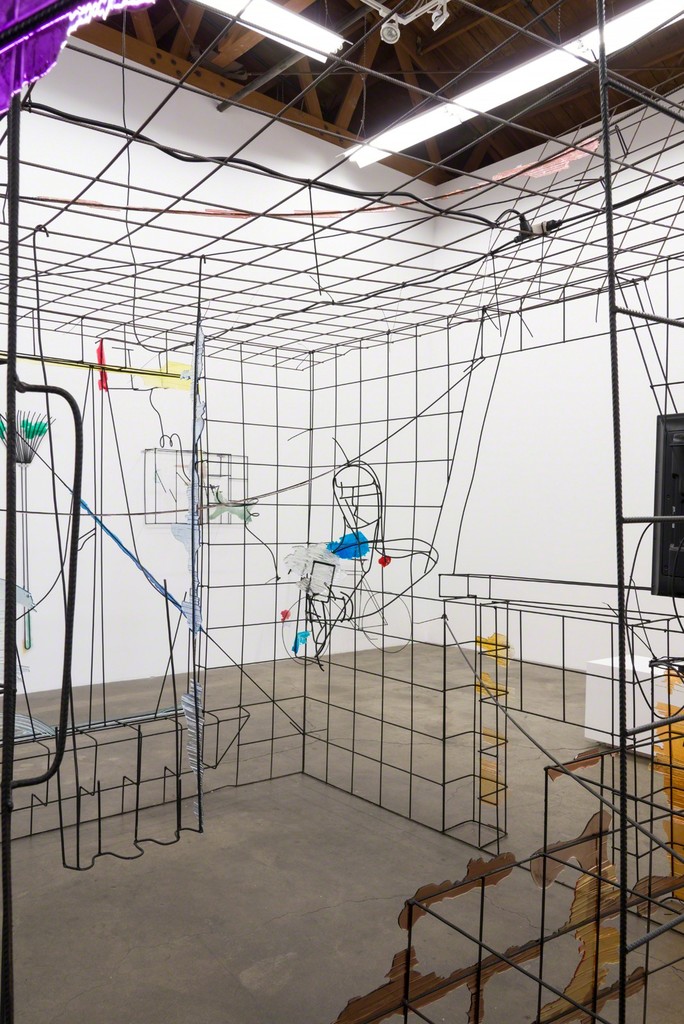 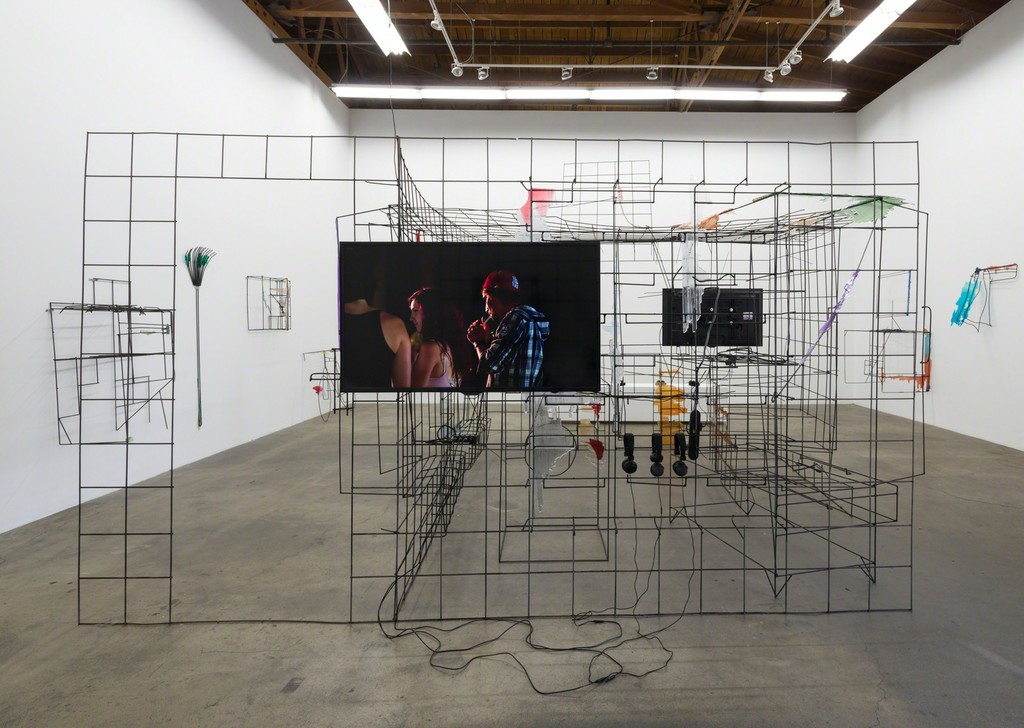 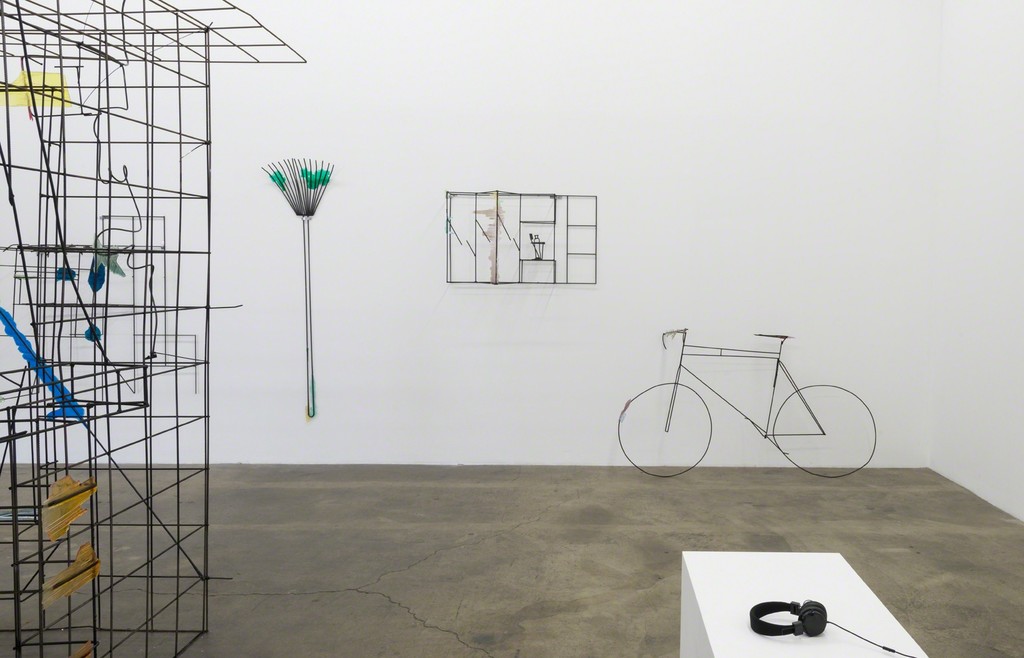 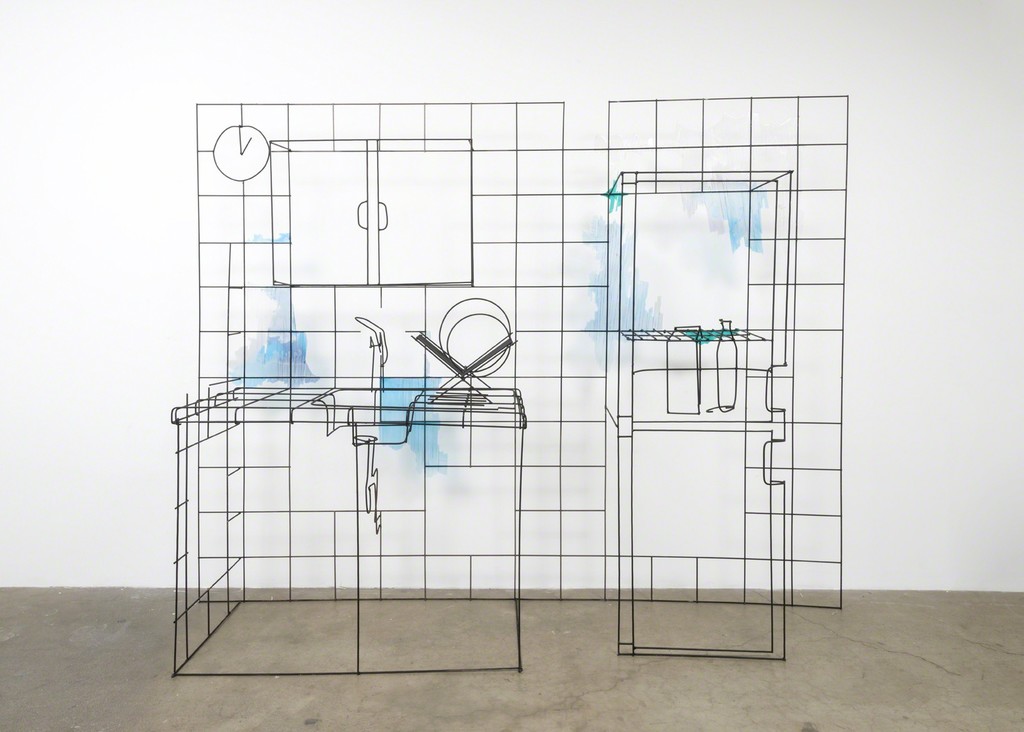 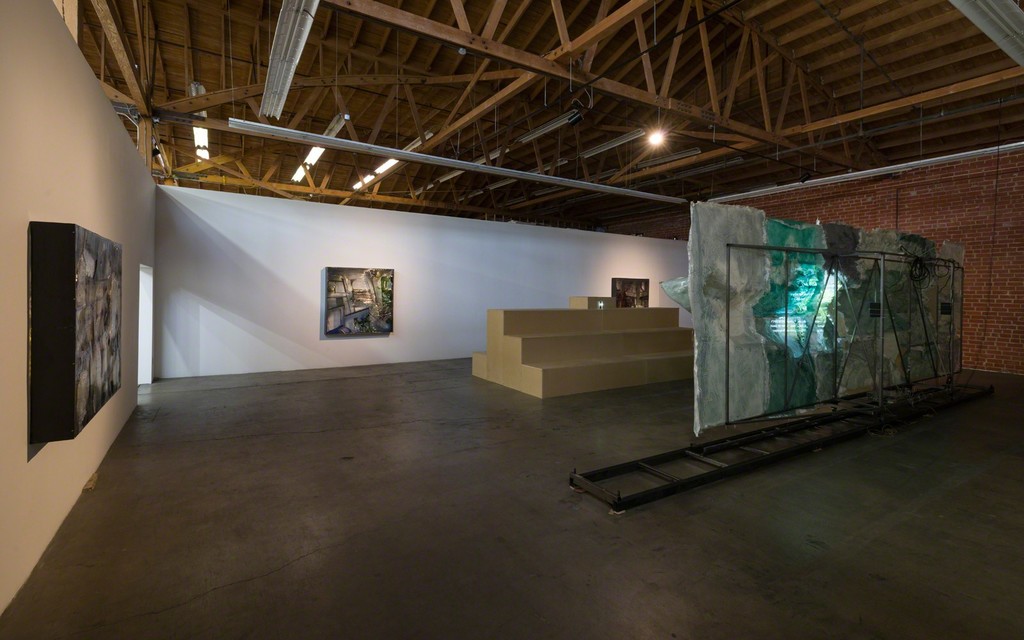 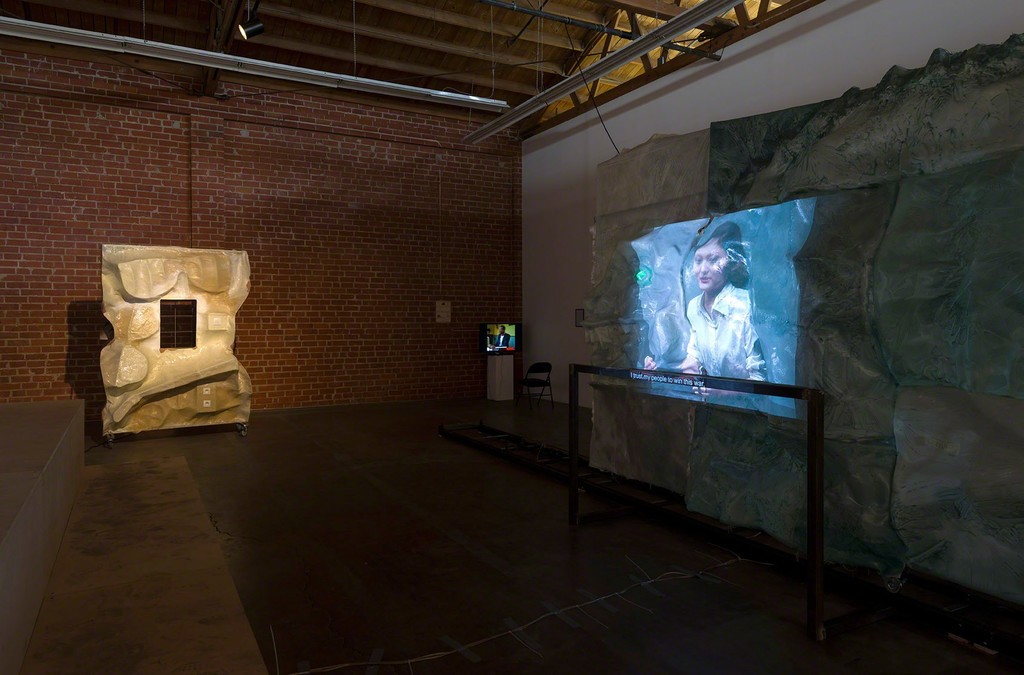 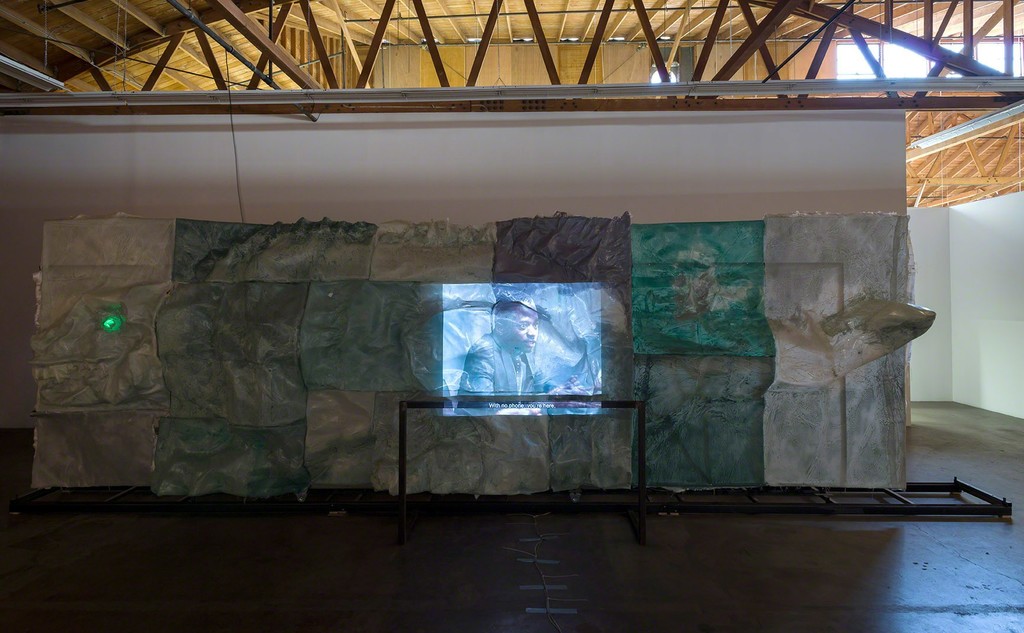 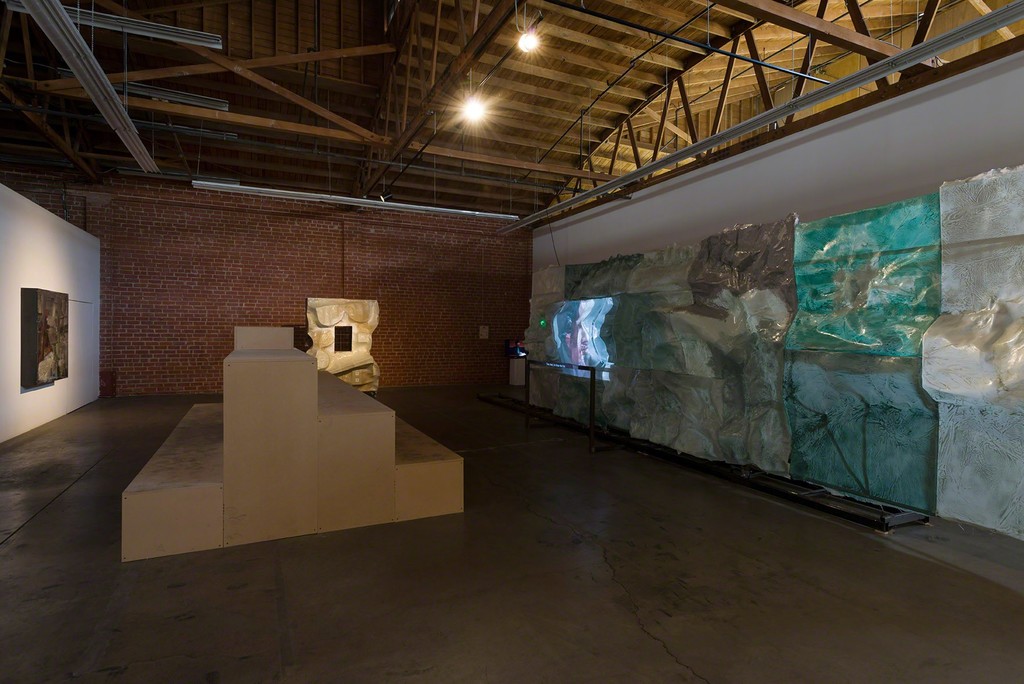 Over the past decade, Neil Beloufa has worked in video, sculpture, and installation, composing digital and physical spaces reinforced by mechanical and emotional vulnerability, complicating the viewer’s trust in the screen as a medium for generative information and culture. Democracy features two sculptural environments as arenas for recent video works: Data for Desire (2014) and World Domination (2012), each furthering his examination and commentary of media systems and perception in a digital age. The title, acknowledging a moment of particular global political tension, queries the illusory freedom of choice and the moral boundaries of systems of power.
The exhibition begins with an installation of to-scale objects from a postmodern home rendered solely in twisted rebar and resin, a catalog for a Western utopia. A central installation containing a hearth, wardrobe, and salon position the viewer in a life-size drawing, with washes of resin coloring each object and scene with action. Unrelated objects of life and design densely line the walls, democratically overlooking their significance. Beloufa manipulates the space between image and object with no detail spared. Fixed to the grid walls of the centerpiece is Data for Desire, a film presenting two circuits of young adulthood: a pseudo-scripted, confessional view of young partiers in a resort town, and a group of early-twenties mathematicians in France observing the party as a video document, mapping an algorithm to predict compatibility among its players. In a world in which “likes” and “shares” are currency, Beloufa humorously probes for meaning.
A doorway leads to The first dinosaur, lampshade, fertility and complete denial (2014), a kinetic installation composed of steel with a motorized sculpted fiberglass dinosaur. A figment of invention, the artist designed the dinosaur by merging illustrations of prehistoric life from the internet, deconstructing image hierarchies and crafting an organic likeness from an unreliable collective memory. World Domination permeates its surface, presenting a hypothetical window into the situation rooms of world leaders, a wartime fan-fiction. As director, mirroring his sculptural practice, Beloufa works primarily as an editor, constructing scenarios that allow for chance and improvisation to circumvent a set narrative, questioning authority by eliminating his dominant role and awarding agency to actors or materials. In this work, Beloufa casts non-actors as world leaders declaring war on one another to solve fundamental issues in their countries; the resulting film is a candid, often politically incorrect study of power, employing streaming news media and reality television tropes to discuss themes of self and state surveillance, capitalist economies at odds, and communication mediated by cloudy, cross-wired channels. Here, the dinosaur functions equally as a screen and pathway, with light and images seeping through, abstracted and refracted against the wall. Its visible armature elucidates his sculptural practice: the transparency of its making and evidence of the hand is central to the work.
In a nearby series of imposing wall works, Chutes d’Atelier, studio scraps are fused into multi-dimensional panels - painterly studies of his signature raw materials (resin, steel, and pigment). A self-regenerative practice and formally inquisitive joke, the works provide relief from the engrossing quality of his installations, offering an opportunity to zoom in on his material relationships. The resulting landscape of Democracy is not a selection of artworks with concrete authorship, but an exploration of viewer-positioning and shifting analytical dynamics.