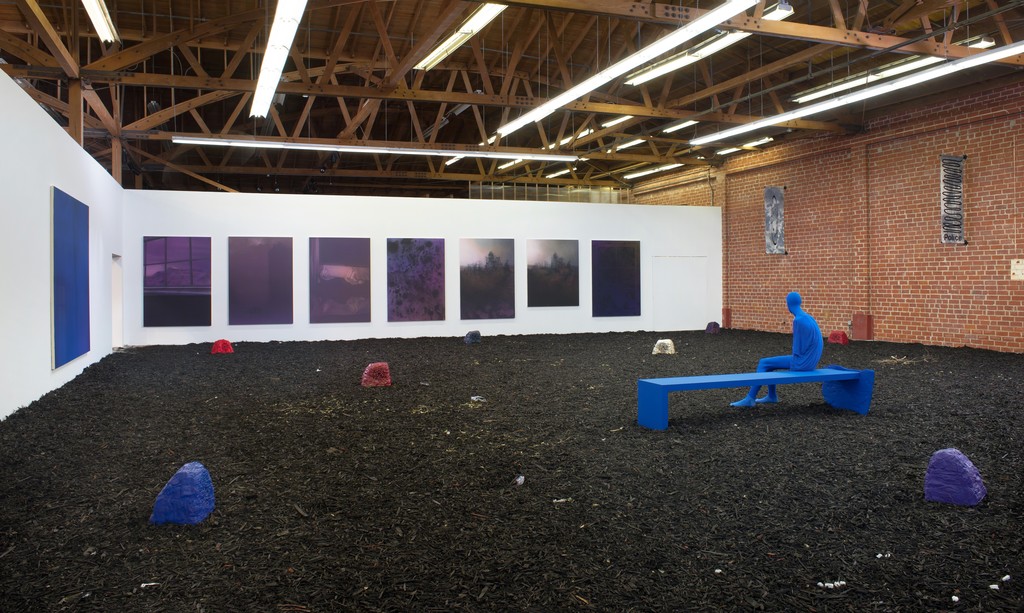 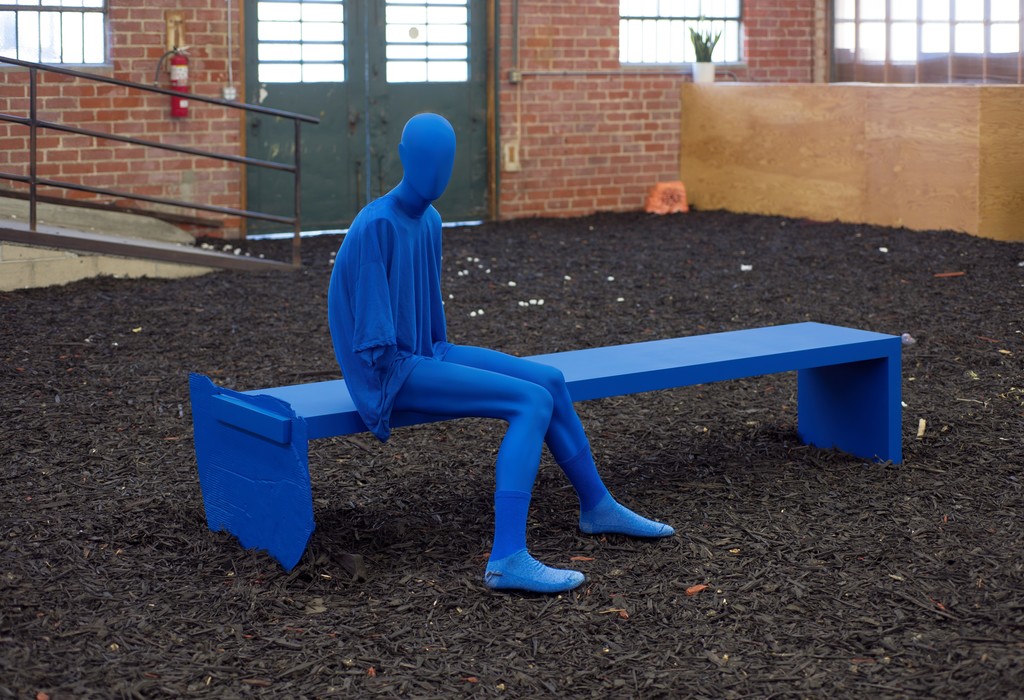 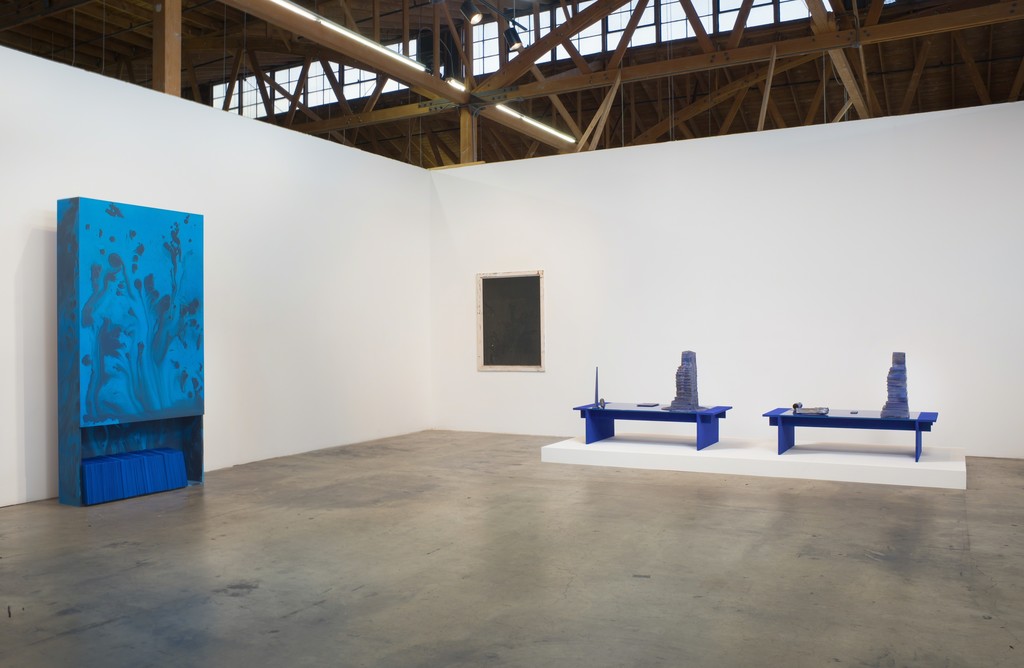 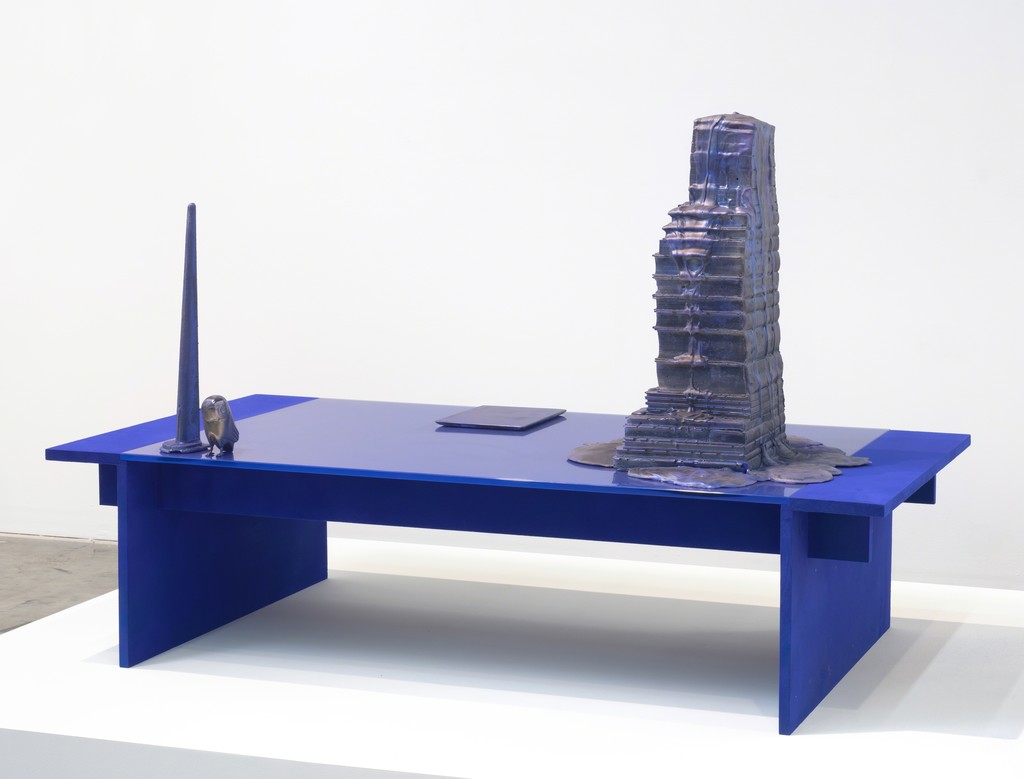 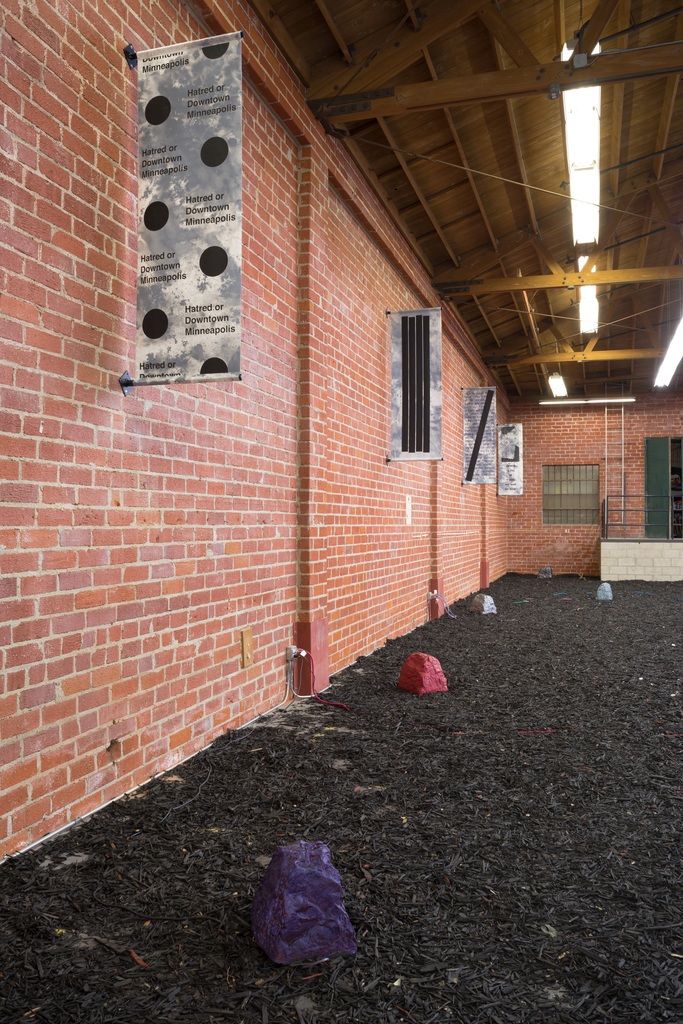 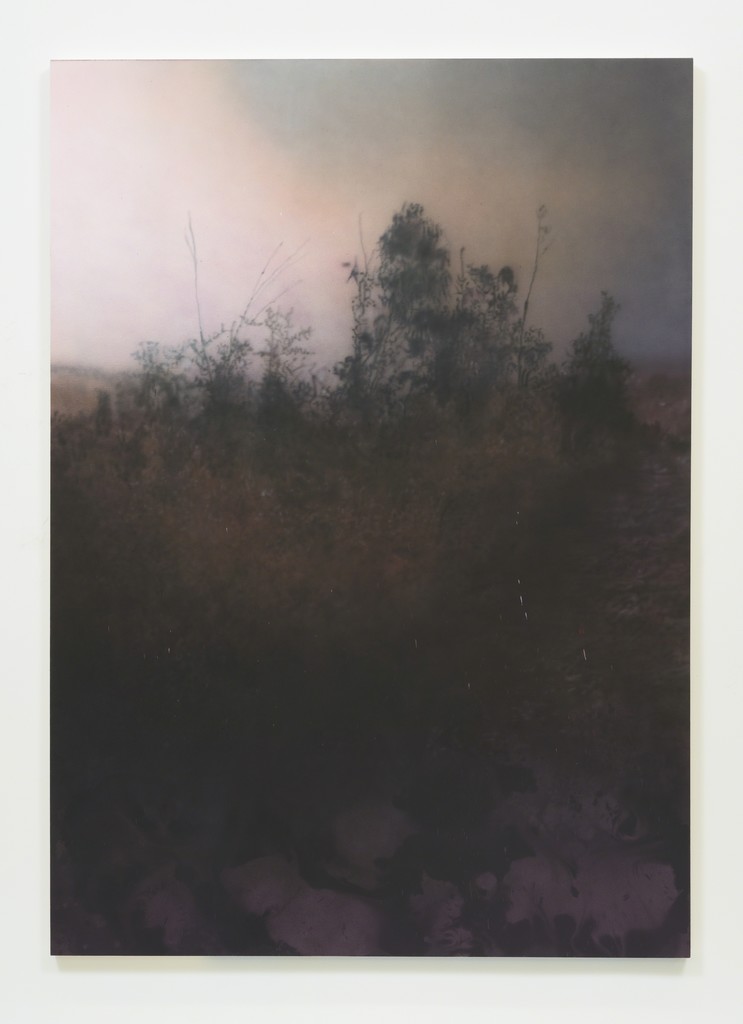 François Ghebaly is pleased to present I’m Different, Sayre Gomez’ first solo exhibition in Los Angeles. The exhibition will consist of 4 distinct yet related bodies of work that are all centered around the ideas of ___ , __ , ____ , ____ , __ . Each body of work is presented within two different yet highly contrived spaces loosely referencing a shopping center with its indoor showroom, and surrounding outdoor garden.
In the main gallery, one first steps into The Hypnotic Presence of Popular Music in Southern California, the artist’s first large-scale, multi-channel installation. Covering the entire space, the work is comprised of 12 speakers housed within individually painted fiberglass outdoor garden rocks resting on a bed of woodchips. Each respective rock plays a different pop “anthem” sourced from Mark Zuckerberg’s playlist titled Quest, which is publicly accessible on the music streaming platform Spotify. Further referencing outdoor spaces, painted banners hang on the brick wall of the gallery. Designed by Chicago-based design firm, Struggle Inc., the banners feature various slogans sourced from algorithmically generated “lorem ipsum”, a design industry tool often referred to as dummy text.
The remaining walls will present a series of Gomez’ new paintings. The subtle color gradients from dark to light purples and blues range from representation to abstraction, and lead the viewer from the “outdoor” space into the “indoor” space housed in the adjacent room. Gomez’ paintings employ industrial application processes, such as airbrush and automotive paint sprayers, techniques that have historically been used in the film and advertising industries. While the representational paintings of images drawn from different online sharing platforms appear photographic, they are also made to be photographed, a primary intention of the histories being referenced. The process of his abstract works also share a similar relationship to representation. At first black and white, the compositions are buried under layers of pigmented varnish creating a sensational “window” from which the abstractions peak through at differing levels of opacity and color.
Following the paintings, and entering the Show Room, the viewer will encounter two sculptures of identical mid-century northern European designed coffee tables. Constructed from three distinctly different materials and surfaces, they will be adorned with objects commonly found in the homes of ____, such as ___, _, and __. Near the tables, Large Plinth with Records features a patina similar to artist’s abstract paintings, and prominently features a stack of cast vinyl records. The room will also feature Uww (Untitled window work), in which the artist repurposes a salvaged window as an artwork by installing it directly into the gallery wall. Because of the reflective nature of the glass the window is never without an image. It functions as both an object to look into, and an object to look at. Finally, the large painting Generation Gap, features two popular quotes turned slogans from John Lennon and Kurt Cobain.

Sayre Gomez holds a BFA from the School of Art Institute of Chicago (2005) and an MFA from CalArts (2008). Recent solo exhibitions include Slippery at The HOLE in New York, This is to Sink at Michael Jon Gallery in Miami, and Windows and Mirrors jointly hosted by Kavi Gupta Gallery and New Capital, in Chicago. The Artist also co-organized, with JPW3, the exhibition Culm at Night Gallery in Los Angeles, and has recently participated in group exhibitions at Fluxia in Milan, 356 Mission St. in Los Angeles, Clearing in New York, Robert Blumenthal in New York, Nagel/Draxler in Cologne, and Balice Hertling in Paris. Gomez’s work is included in BRIGHT!: Typography Between Illustration and Art, Published by DAAB, in 2013, and 100 New Artists published in 2012 by Lawrence King, UK. His work has been featured in various publications and blogs such as Artforum Magazine, Artforum.com, Contemporary Art Daily, and
Flaunt Magazine.