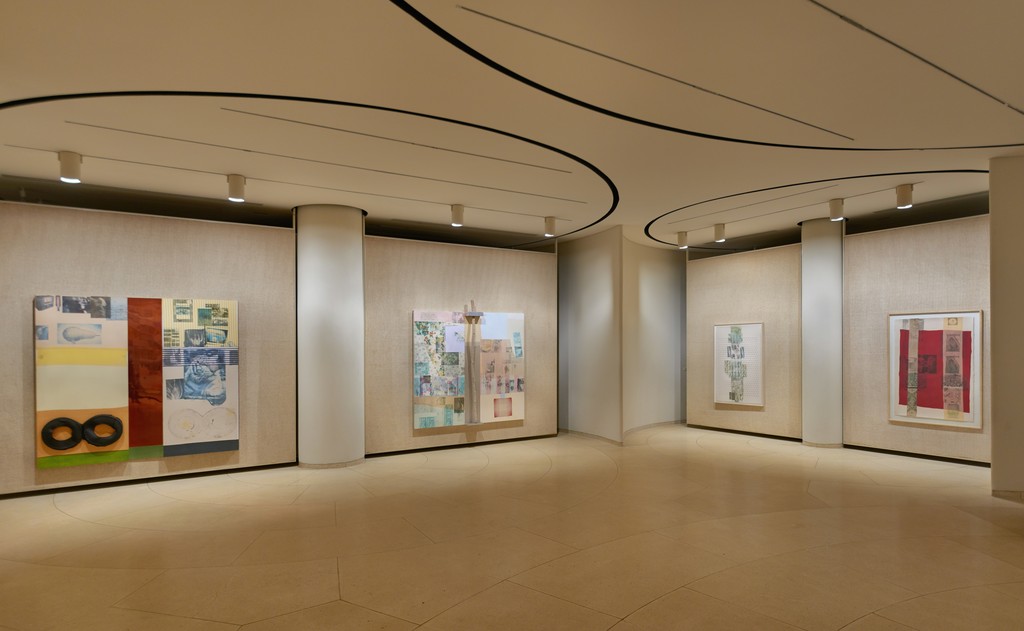 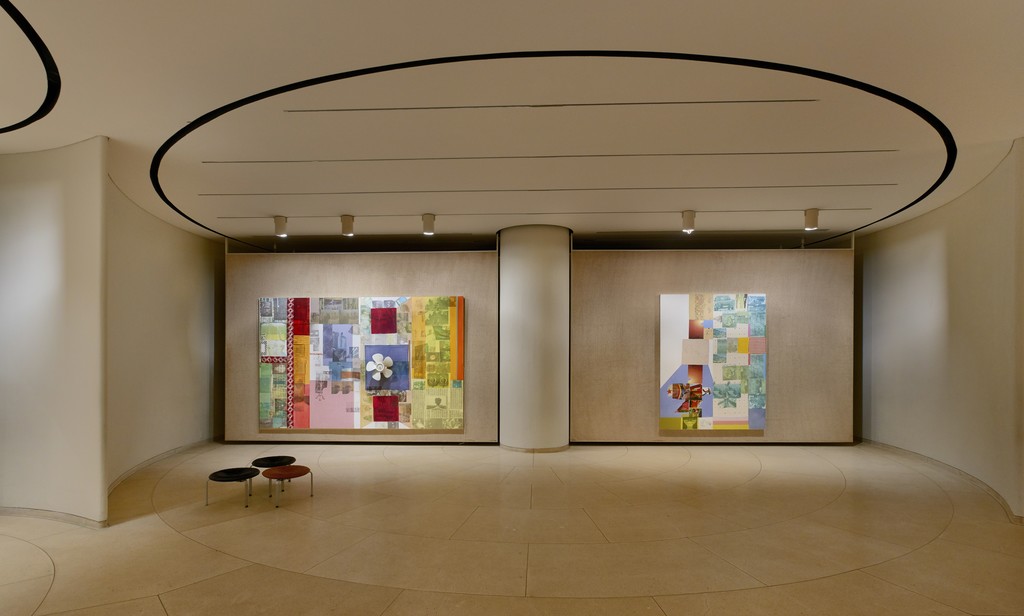 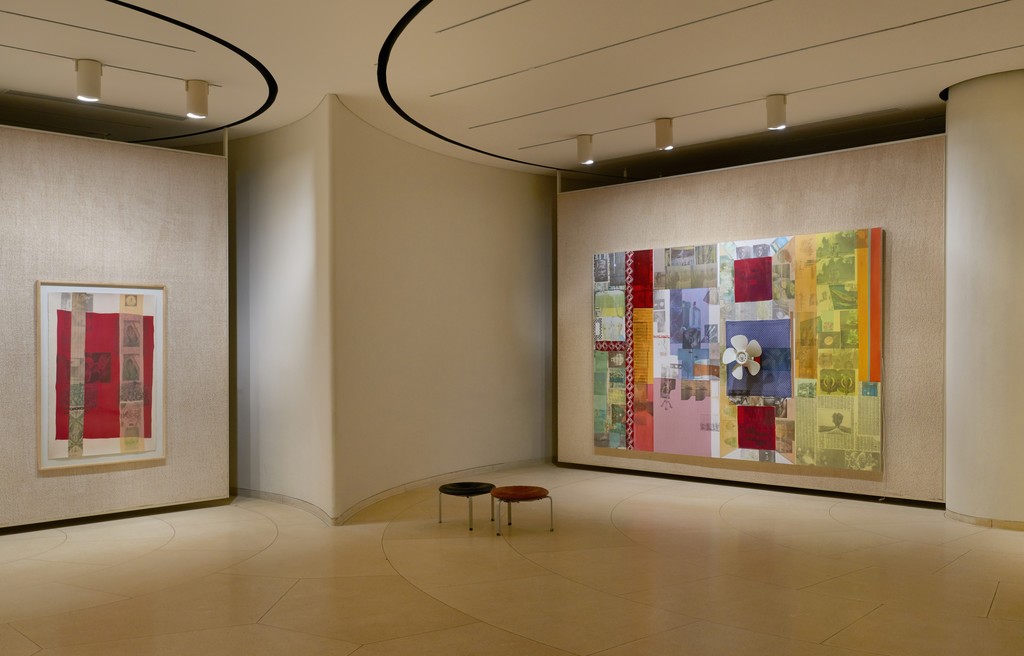 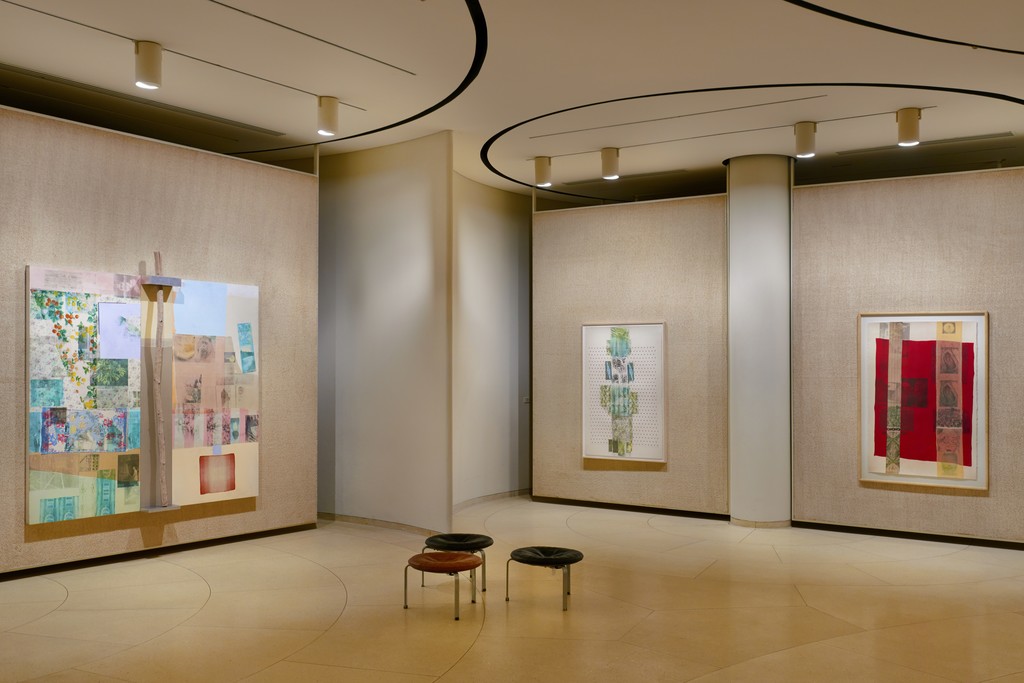 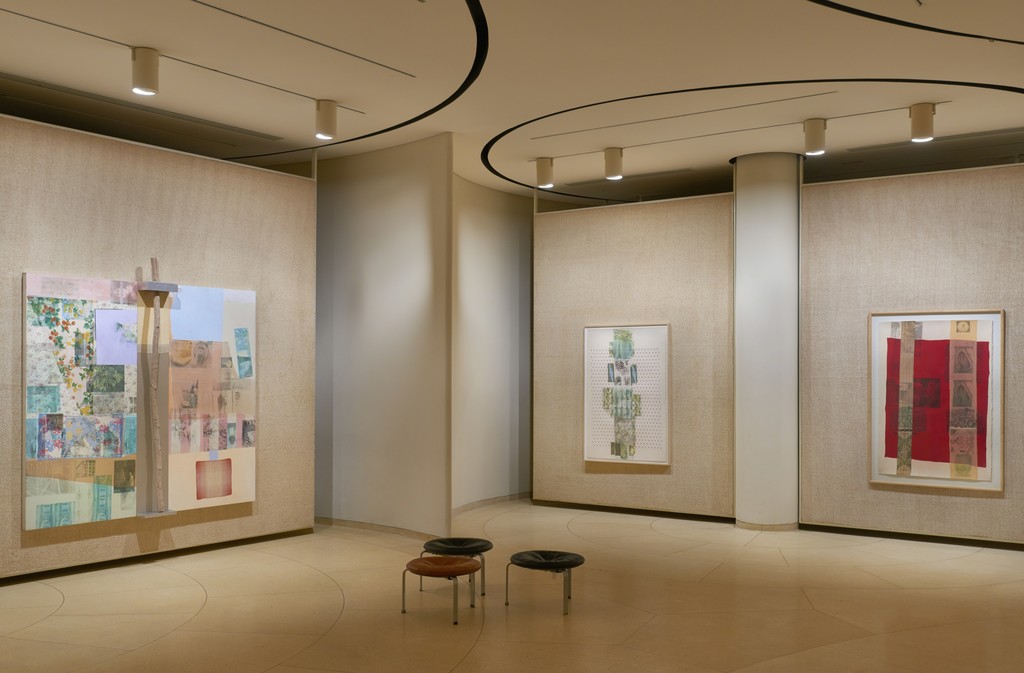 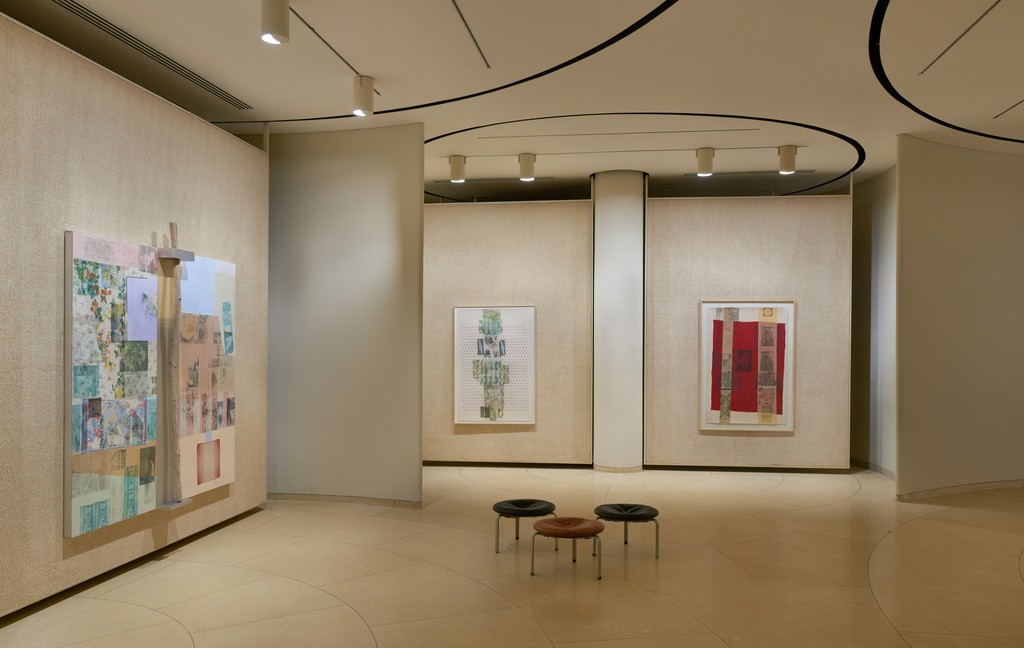 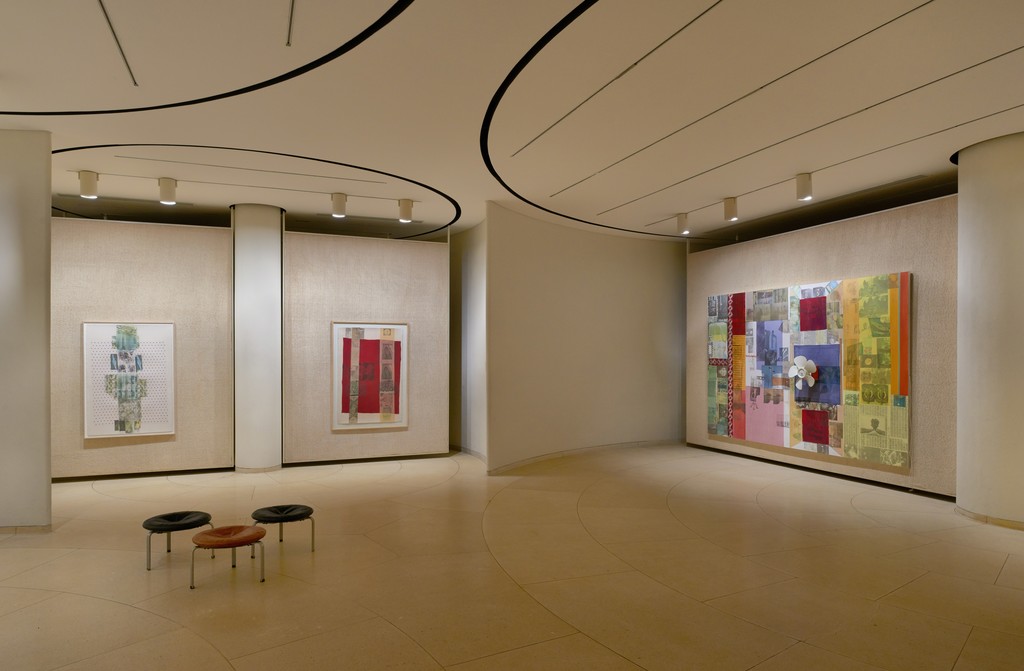 The exhibition Robert Rauschenberg: Spreads and Related Works is a group of paintings and works on paper chosen to compliment the painting Recital (Spread), 1980 which Philip Johnson purchased that same year. The Spreads series was inspired in part by the Rauschenberg retrospective that was organized by the Smithsonian Institution in celebration of the nation’s bicentennial. It premiered at the National Collection of Fine Arts, Washington, D.C. in 1976 and there the artist had a chance to revisit many of his earlier works which he had not seen in years. The Spreads reference the Combines, the Cardboards, Hoarfrosts and Jammers, but with a new vibrancy and authority.

The Spreads are composed of wooden panels to which Rauschenberg variously applied acrylic, solvent transferred imagery, collage of paper, fabric and colored or mirrored plastic plus commonplace objects such as fans, pillows, buckets and lights. He incorporated a tire in one of the exhibited artworks, Ruby Re-Run (Spread), 1978, the tire sliced open and flattened against the surface, like a double donut. Its ghost impression sits symmetrically opposite it. Seventeen years earlier, the artist made the Combine First Landing Jump which Philip Johnson purchased and later gave to the Museum of Modern Art. It was the first painting by Rauschenberg to enter the museum’s collection. It too includes a tire, in this case connected to the lower edge of the painting but also resting on the floor. This interplay between two and three dimensions and between wall and ground had been a part of Rauschenberg’s creative process throughout his career. The lively and varied imagery of these works references his life-long involvement with photography and the reflective surfaces of the plastic point out Rauschenberg’s contention that an artwork is incomplete without the presence of the viewer.

Additionally, the exhibition includes two works from the Slide series, 1979. Again the artist used fabric collage combined with solvent transferred images, this time on paper. After the imagery had been transferred, the vertical strips of fabric were shifted slightly – a move calculated to produce chance effects. Although he was rigorous and exacting with his ideas, he often set up situations where he would not be sure of the outcome until the work was finished. He once said, “I want my paintings to be reflections of life.”

This exhibition was organized by David White, Senior Curator of the Robert Rauschenberg Foundation.

David White was the curator for Robert Rauschenberg from 1980 until the artist’s death in 2008. He is now senior curator at the Robert Rauschenberg Foundation and has overseen Rauschenberg exhibitions, publications, and projects over the last thirty years. Prior to joining Rauschenberg’s studio, White worked for both the Leo Castelli Gallery, New York, and the David Whitney Gallery, New York. Following the close of the gallery, White continued to work for Whitney who, as an independent curator, organized retrospective exhibitions of Jasper Johns, Cy Twombly, and the first exhibition of Andy Warhol’s portraits, all at the Whitney Museum of American Art. White is a graduate of the Rhode Island School of Design.