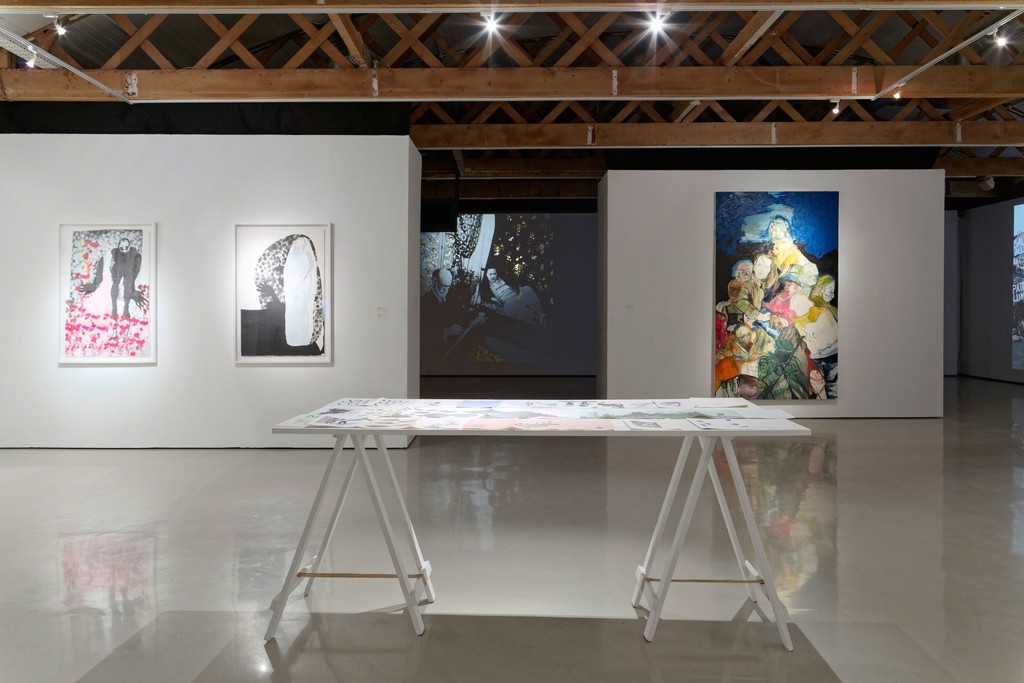 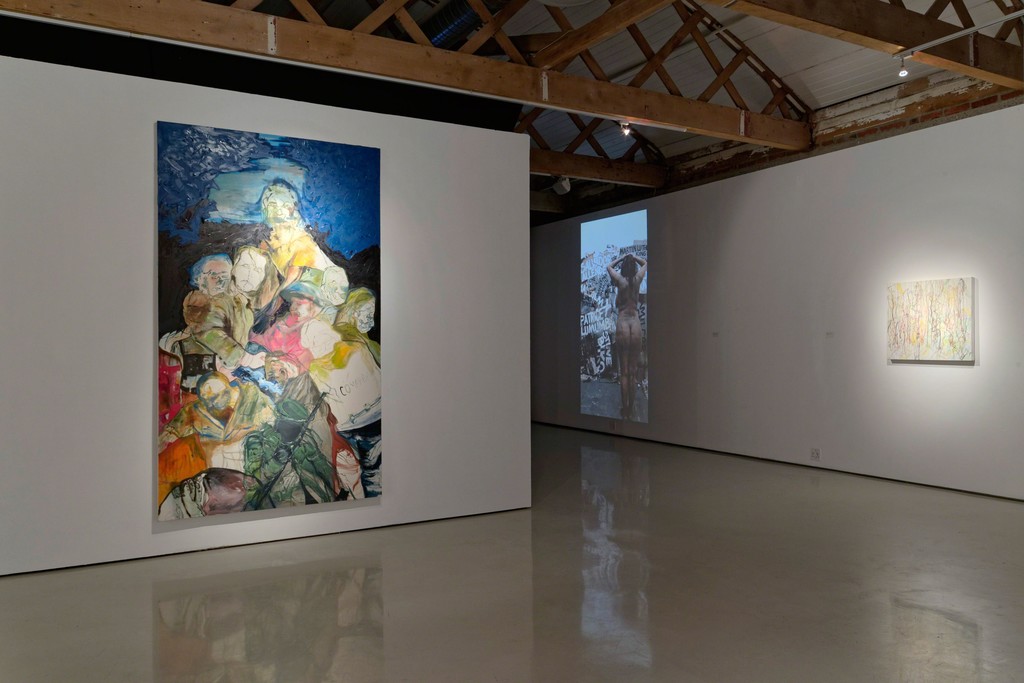 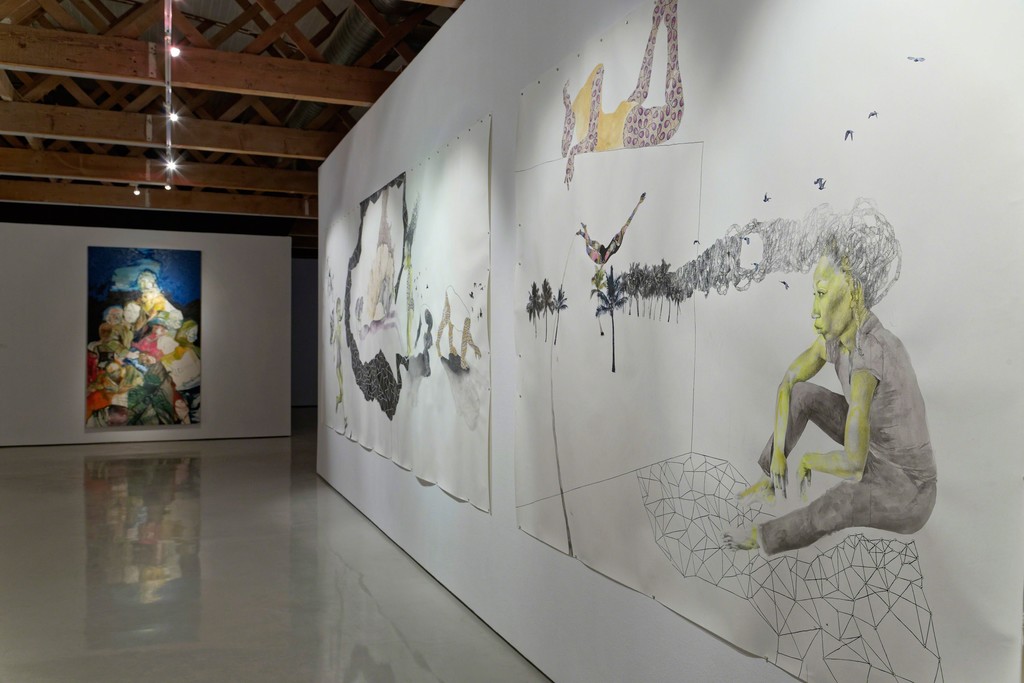 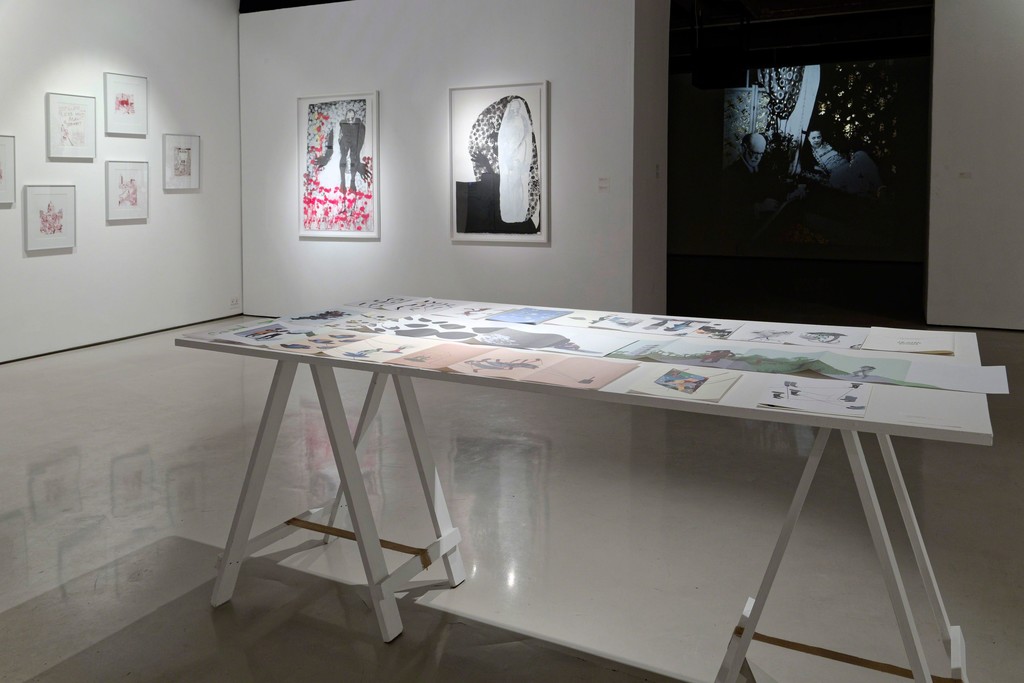 Speaking Back seeks to reveal deeply significant dimensions of culture and subjectivity, history and struggle, by bringing women together as diverse artists to find out what each in her artistically signified yet gendered/racial/sexual/cultural singularity is offering to the world, to us all. It seeks to attain a more complete knowledge of that world, as it is lived, from multiple positions over time and space.

We have a tendency in exhibitions of work by women to generalise the artists as merely exemplars of a gendered collective: women, a sexualising nomination by which they are, as a category lumped together, their singularity annulled. While the exhibition makes space – conceptually and physically – for women artists, it embraces the potential of aesthetic practice to bring forward the singularity of each person and the variations in her specific symbolic capacities. If there are any generalisations to be made, it could be said that Speaking Back, prioritises narration – the use of particularly chosen aesthetic practices to convey a story to an audience. Not just as storytelling, but as speaking authentically, with vulnerability and strength, about who we are, and about the power of narration and its endless possibilities for reinvention.

Presented for the first time in South Africa, Ellen Gallagher is an acclaimed artist who, starting in the mid-1990s, has united various media with a range of subject matter to explore the place, and places, of African Americans. In Odalisque (2005), one of the artworks in the exhibition, Gallagher takes a photograph by Man Ray of Matisse, substitutes Freud’s head for that of Matisse’s and gives the model who is being drawn (and whose dress suggests that she is from that most sexualised and most sexually unequal context, the harem) the artists own face. Like the artist staring back at him from a reclining body, we confront the image of a great narrator of the universal psychic world attempting – it would appear with some awkwardness – to draw, and hence represent, an individual reality. Odalisque prompts us to consider what we can and cannot represent about others and ourselves.

In another instance, Virginia Chihota’s stunning screen prints urge us to reconsider not only the lives and strategies of individual artists but also the circumstances in which African diasporic female identity, visibility, and history have been produced and transformed. Her obsessive re-exploration of themes, such as, marriage and motherhood is transformed into a body of works that is striking in its symbolic resonance, and rife with allusions to everyday life, and religious and folkloric symbolism. In the series, root of the flower we do not know (mudzi weruva ratisingazive, 2014) our encounter with Chihota is dominated by the black female figure she insistently imagines, demonstrating a method of representing the self differently while exercising her right and desire to confirm and consolidate her identity as artist and her experience as female.

Adejoke Tugbiyele’s multimedia aesthetic practice offers a different take on sexual identity and political freedom –an issue all too familiar to South African audiences through the work of local artists and political activists. Tugbiyele is an emerging Nigerian-American artist and activist who spent her formative years growing up in Lagos, Nigeria. Her series of drawings, inspired by the journalistic fervour in Lagos during the passing of Nigeria’s anti-gay laws in 2014, draws attention to the self-righteous moralising inherent in contemporary media narratives surrounding the bill and her conceptual sculpture, Unpray the Flesh (2013) investigates religious complicity in the persecution of marginalised groups through the conjoining of religious symbolism with phallocentric worship. In AfroOdyssey V: Demons Contained, a performative video piece, Tugbiyele delves into her own sexual identifications and the narrative ramifications of ‘coming out,’ for familial and cultural histories.

New York-based artist Mickalene Thomas is best known for her elaborate paintings composed of rhinestones, acrylic and enamel which articulate complex visions of what it means to be a woman and expands stereotypical definitions of beauty. Her film about her mother, former fashion model Sandra Bush, demonstrates her ongoing engagement with portraiture as a key to personal and cultural identity. In the process of this extraordinary film, Thomas reveals the complex role of the mother-daughter bond for each woman’s sense of self. Internationally renowned, Otobong Nkanga employs traces of memory and human activity as the sounding board for narration and ‘the performative’ in her work that negotiate the cycle of art between the aesthetic realm of display and a strategies of de-sublimation that push the status of the artwork as contingency. In her artist book, No Be One Story O! (2010) Nkanga makes a radical artistic departure into the realm of literature itself. Based on a series of earlier drawings, Filtered Memories that represent select childhood and adolescent memories of the artist, the book explores the consequences of memory and, simultaneously, the defamiliarisation of the art object.

Speaking Back suggests and invites an encounter with expanded methods of cultural inquiry and the heterogeneity and creativity of contemporary art in the work of the above-mentioned artists as well as that of Ruby Onyinyechi Amanze, Ghada Amer, Candice Breitz, Tracy Rose, Ivy Chemutai Ng’ok, Nkiru Oparah, Kara Walker, and Arlene Wandera.