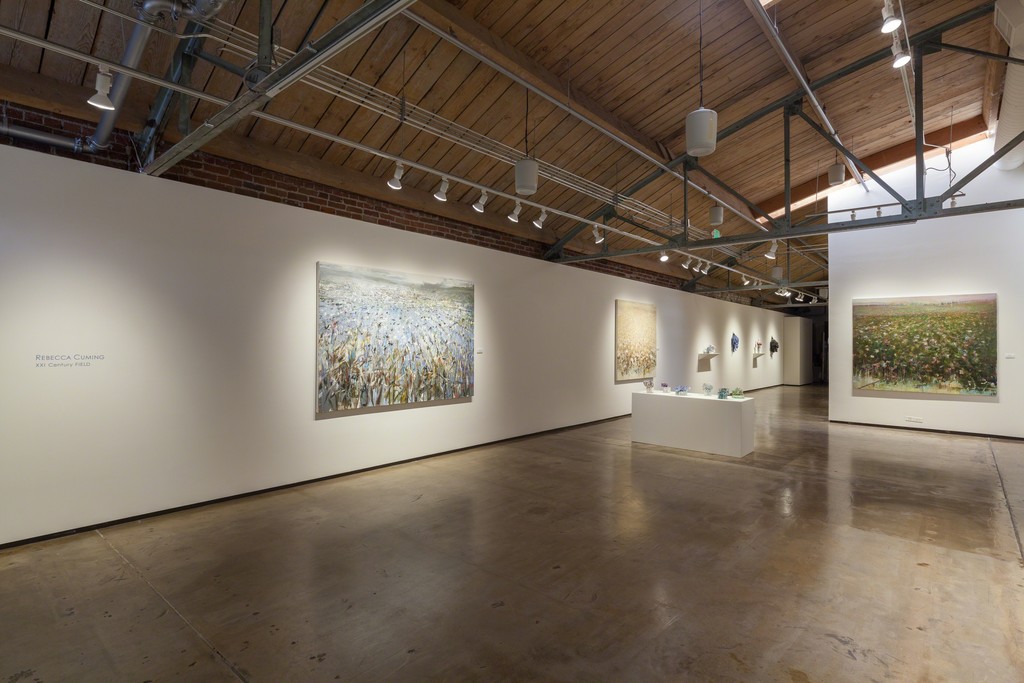 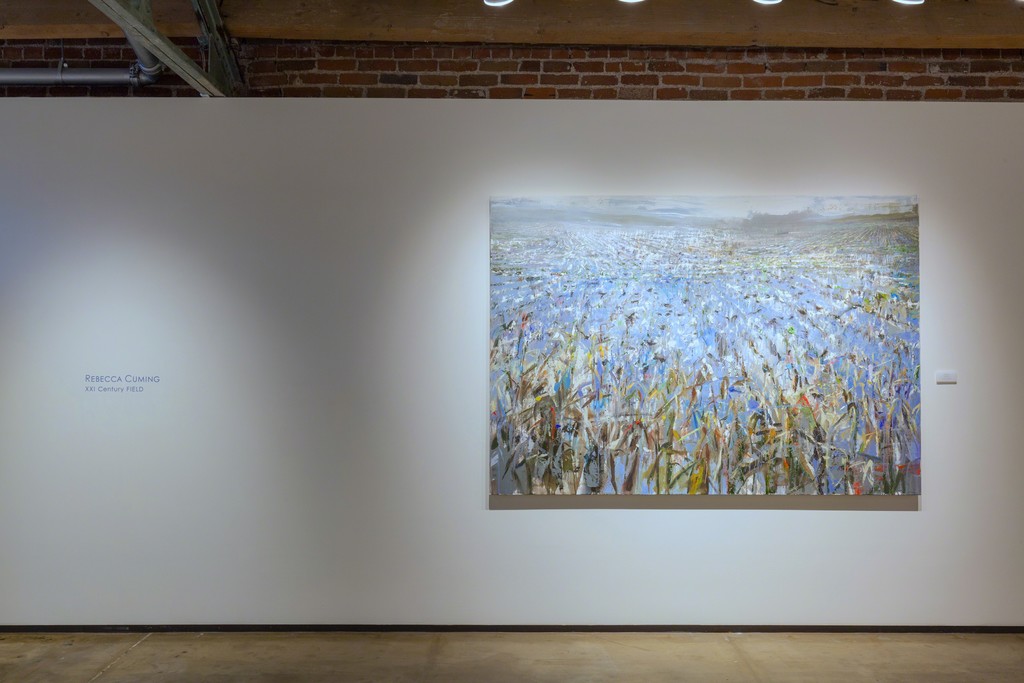 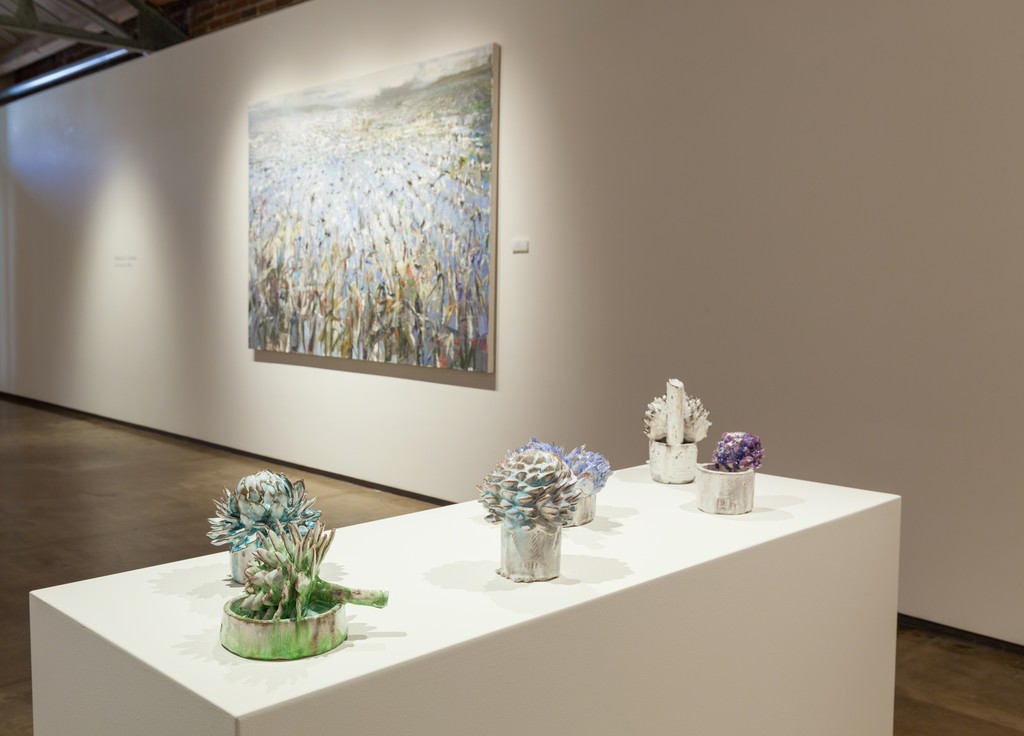 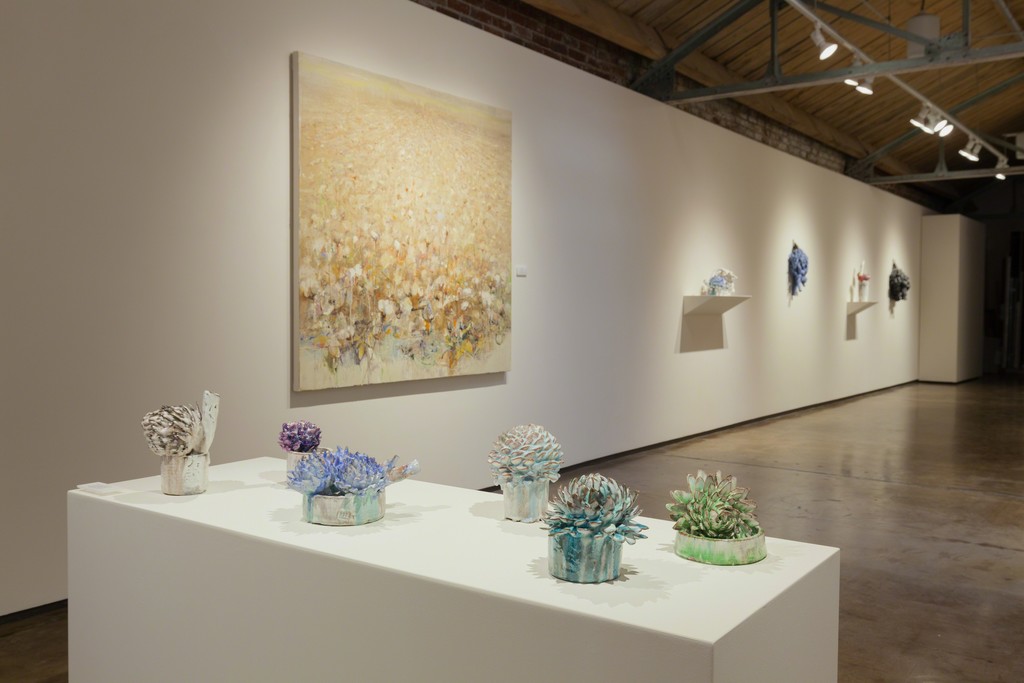 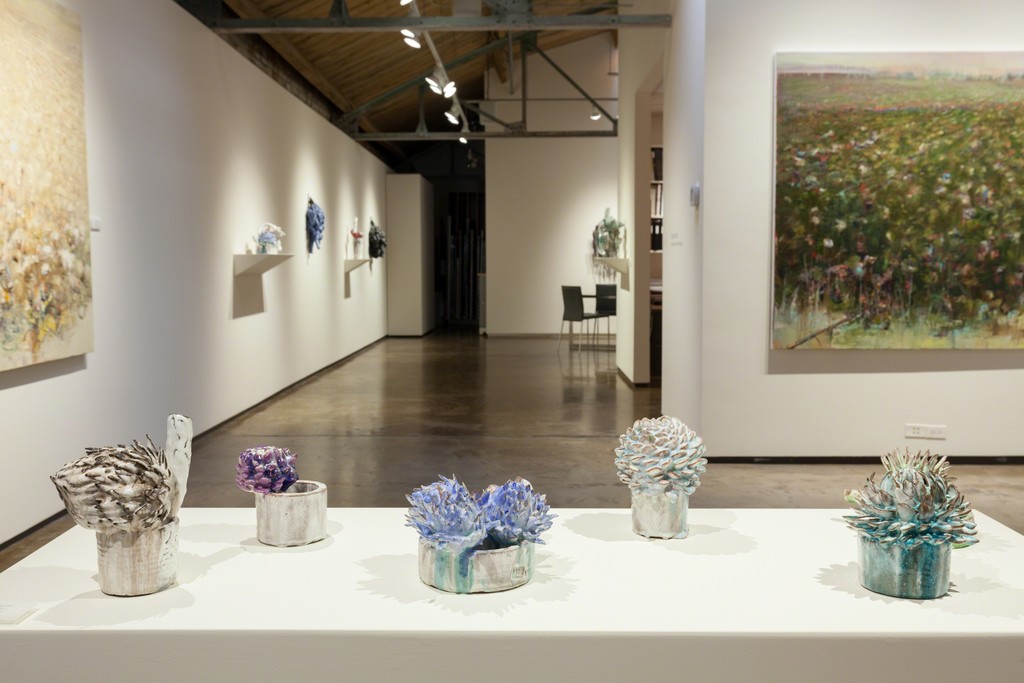 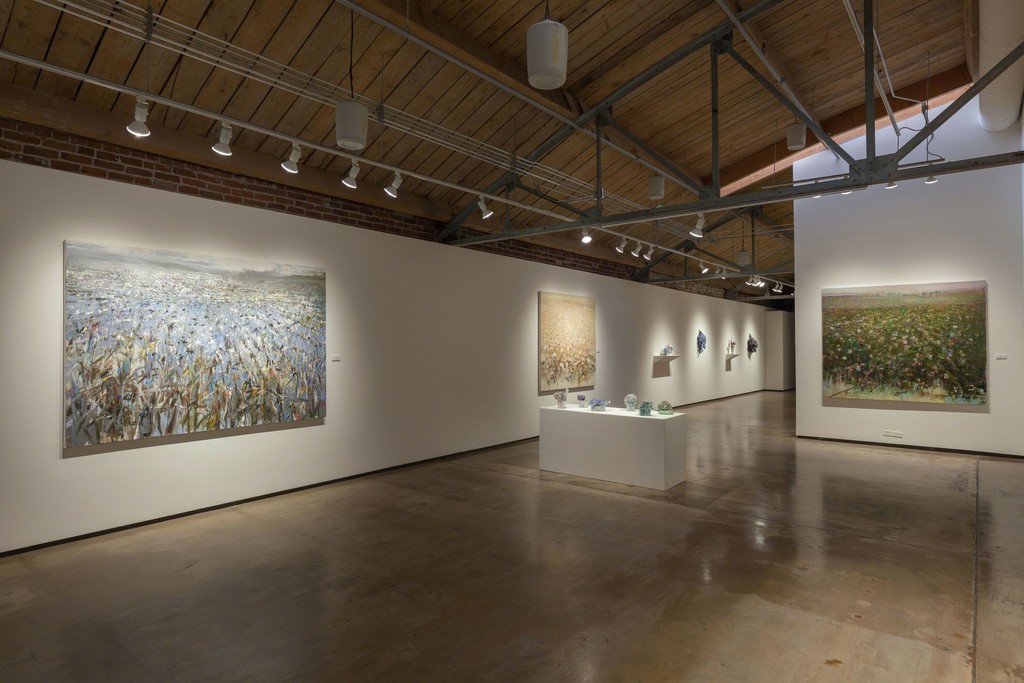 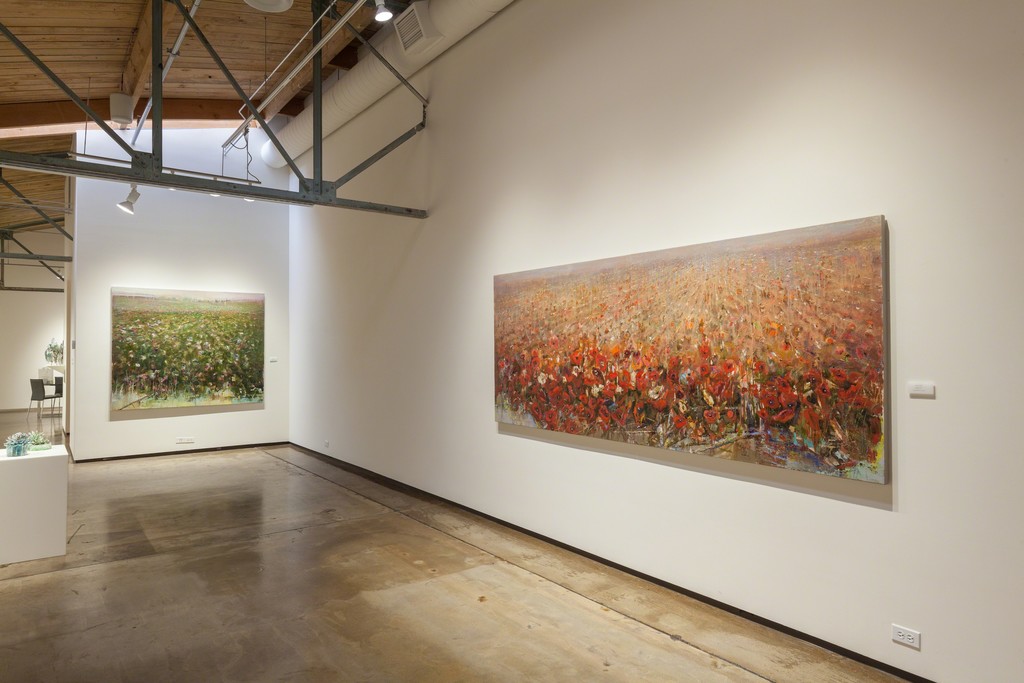 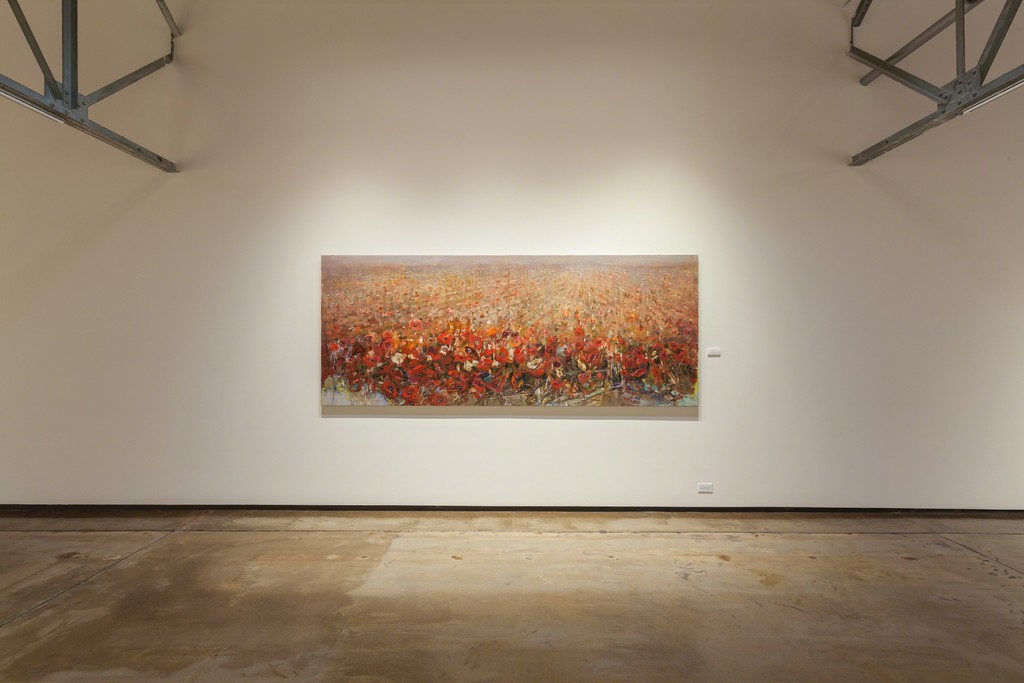 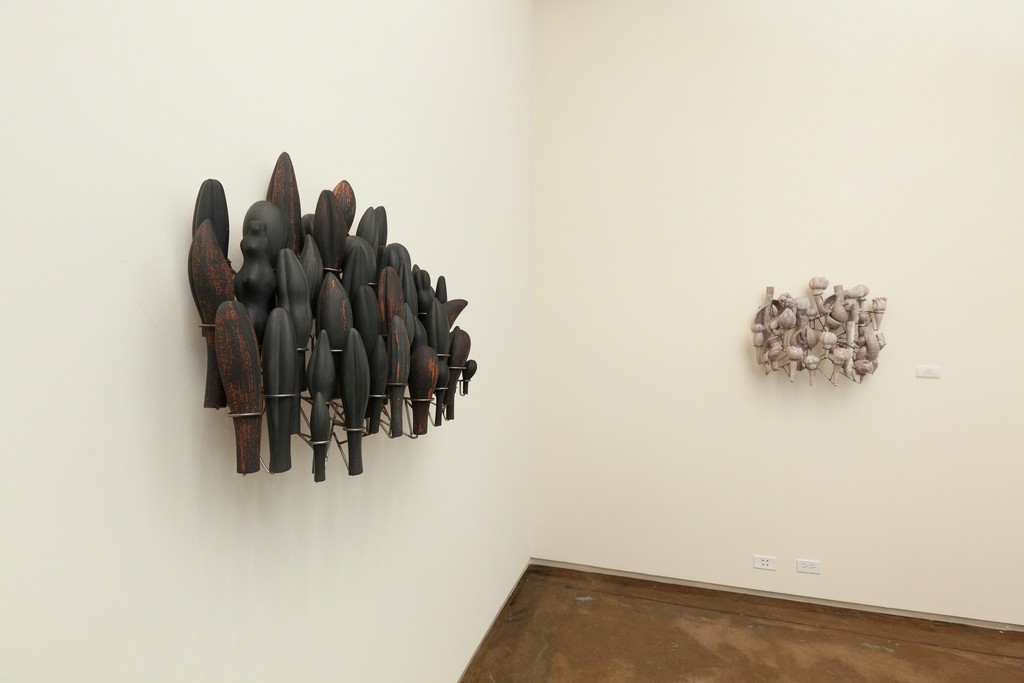 In the monumental oil and mixed-media paintings of Rebecca Cuming, traditional approaches to landscape intersect with abstraction and social concern. With XXI Century FIELD, the Boulder, CO based artist extends her explorations of narrative and realism, directing the viewer from a place of contemplation towards an expressive site permeated with metaphor and transformation.

Cuming describes her approach to each canvas as starting out with thin washes of color that are later built up with thicker oil paint. This layering technique continues, she says, “until revelations of subconscious thoughts and memories develop into images that begin to establish a narrative unique to each work.”

Her compositions typically foreground colorful fields that draw the viewer’s eye upward, towards an indistinct horizon that suggests an unknowable future. Cuming describes painting as being “the best way that I know to interpret the ideas I have about myself and the world in which I live.” Her works are celebratory and somber in equal measure: in Raven (2017) an undulating, icy-blue winter landscape is interrupted by vivid slashes of color and black strokes that evoke the sight and sound of cacophonous birds; Poppies (2017) is a resonant diptych whose panoramic field of deep crimson flowers fades to a hazy vista of dripping mauve. Both paintings are redolent with the cycle of passing seasons and the subliminal imprints of mankind and machinery.

Originally from Middletown, New Jersey, Rebecca Cuming received her Bachelors Degree of Fine Art (honors) in 1980 from the School of Visual Arts in New York City. She has exhibited extensively in the U.S. including The National Gallery, The Sumner Museum and The Senate Building in Washington, D.C. and the Allan Stone Gallery in New York City. Cuming moved to Colorado in 2009. Her regional exhibitions include The State Capitol, Arvada Center for the Arts, Dairy Center for the Arts, Lincoln Art Center, RedLine Denver, and Pirate Gallery. In 2016, Westword critic Michael Paglia described her show at Pirate as a “spectacular” display of color and painterly skills. Her work was first shown at Goodwin Fine Art in the 2016 “Open Stacks” exhibition.

Like Cuming, ceramist David Hicks takes his inspiration from the fields surrounding his home. “Agriculture,” he says, “tells me of my own human experience.” His works are presented as arrangements of “shapes and themes” that can be found “suspended in trees, buried in the soil,

or rusting in the shed.” These objects take the form of botanic and manufactured fragments, which he molds by hand. The finished terracotta pieces are glazed and clustered in compositions

that, to use his term, create “conversations” using the language of origins, form, and beauty. They are allegories for what he describes as “the agricultural cycle and its organic wonderment.”

Hicks is a master of creating glazed surfaces. Very often, his pieces are coated with Luster, a copper-infused chemical solution that results in a micro-thin, metallic finish that he compares to the metal trim on a piece of fine china. He also experiments with glaze recipes, taking care not to keep records or to measure so that he is forced to improvise and vary his practice. He embraces the uncertainty of his process, which leads to a distinctive multiplicity of surfaces and finishes.

Hicks installation includes wall pieces, as well as clusters held together by steel cradles, and a selection of smaller scale still life work. Some compositions consist of objects with dissimilar glazes; others are finished with a single color or glaze that allows the pieces to merge and harmonize. While the clusters function as whole objects, the complexity of each component parallels the compositions of still-life paintings, in which the individual elements cohere to demonstrate the artist’s virtuosity.

California based David Hicks received a B.F.A. from California State University, Long Beach, in 2003, and an M.F.A. from New York State College of Ceramics at Alfred University in 2006. His works have been shown extensively throughout the United States, most recently at the Mindy Solomon Gallery, Miami, FL (2017). He is also in numerous corporate and private collections, including the Boise Museum of Art, Boise, ID; St. Petersburg Museum of Art; US Embassy Art Collection, Washington, DC; and the AMOCA Collection, American Museum of Ceramic Art, Pomona, CA.