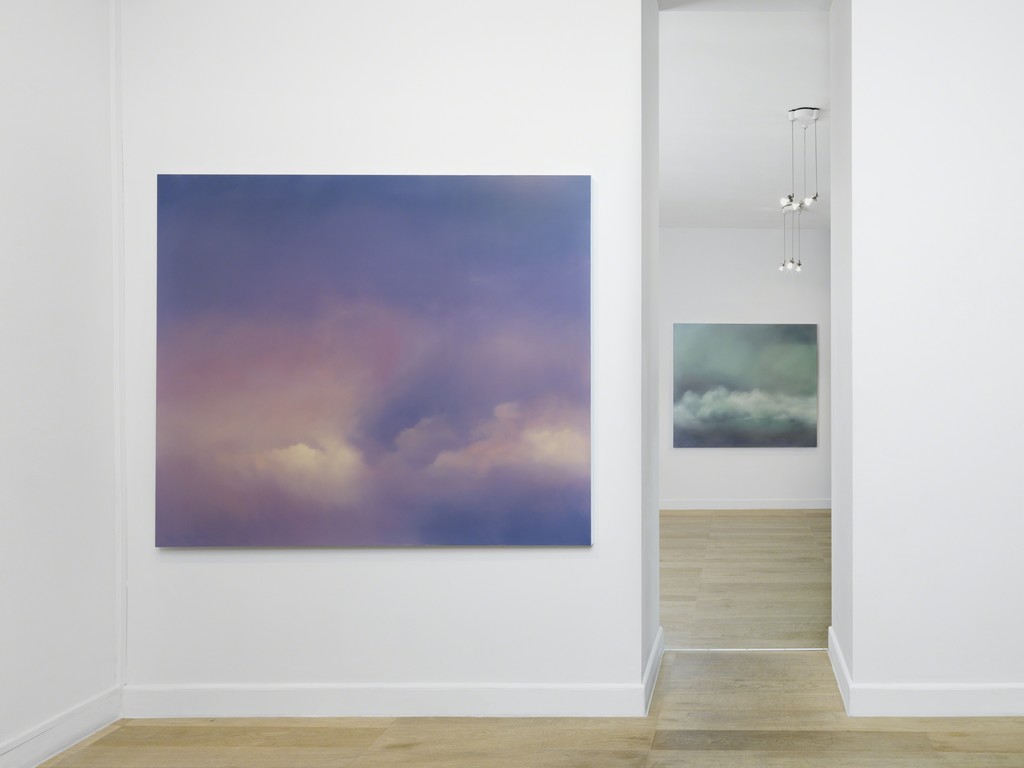 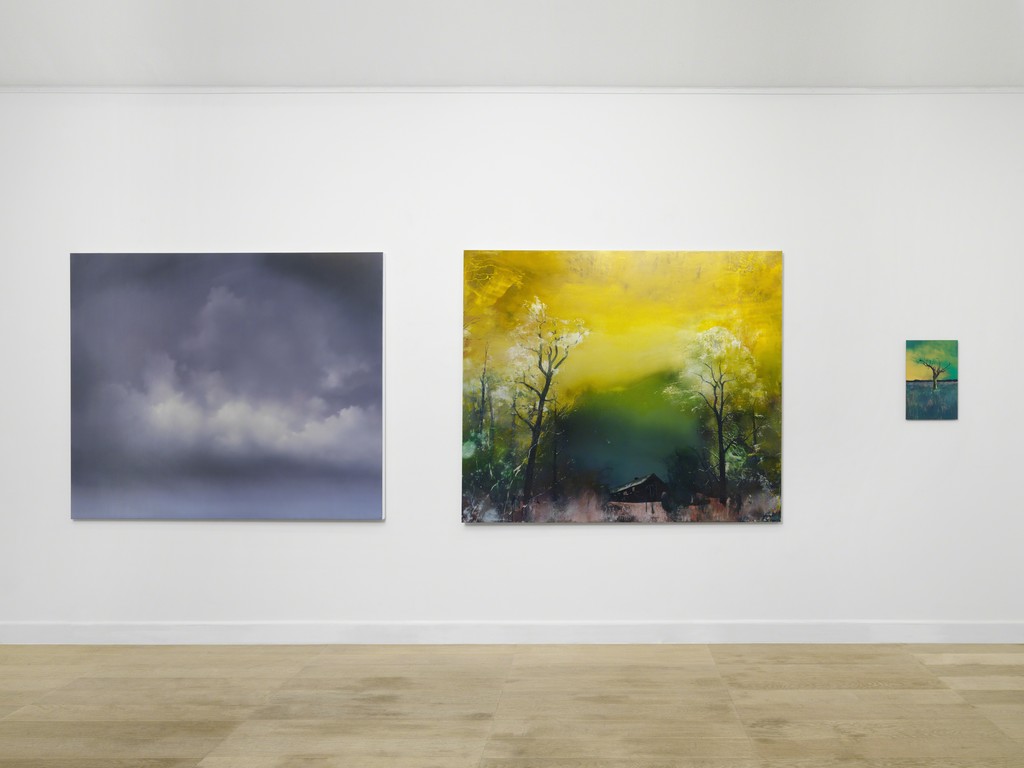 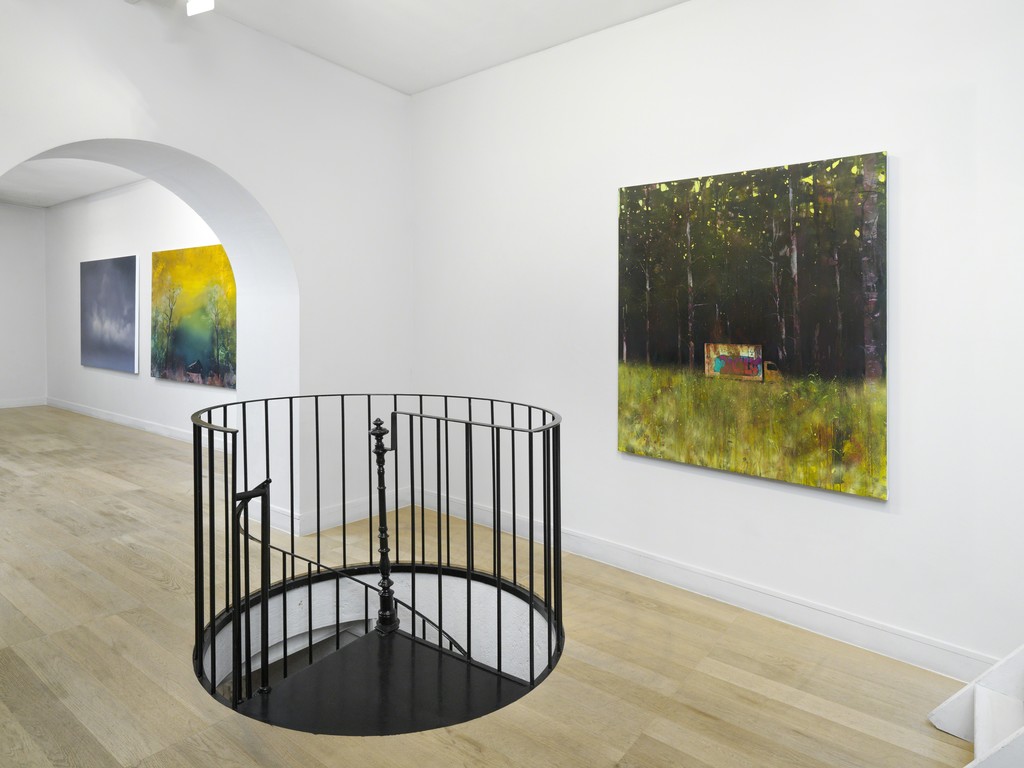 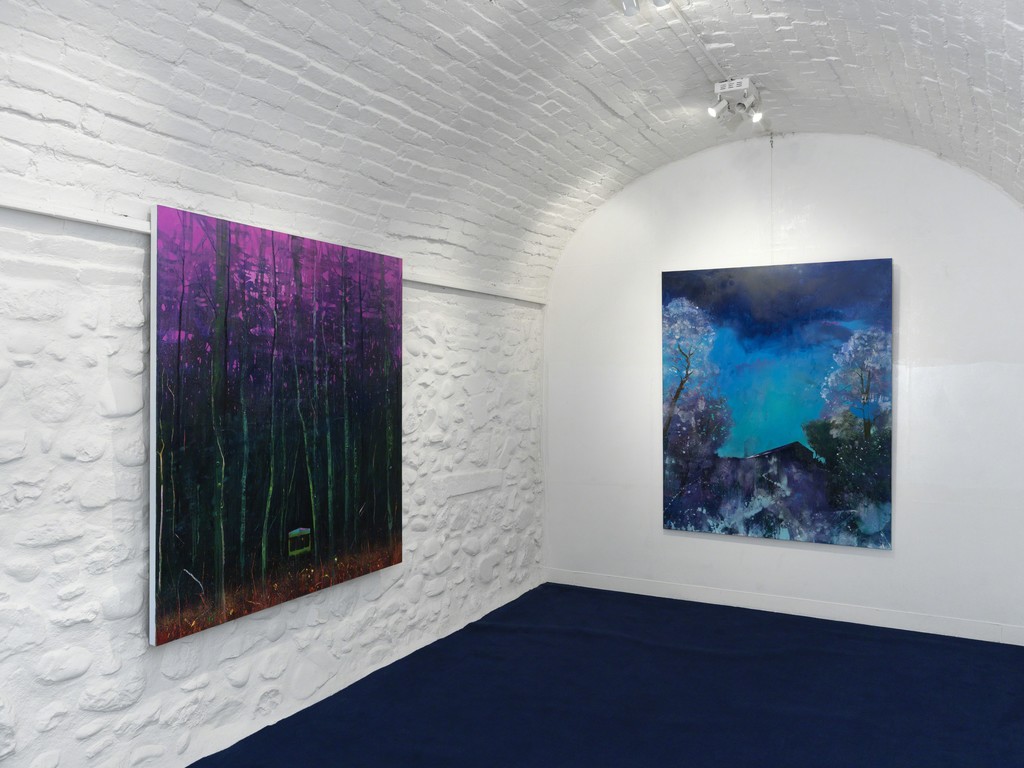 Rooted in the pure British and European tradition of the 19th century and explored by writers and artists such as William Turner or Caspar David Friedrich, the ‘sublime’ is a recurrent theme for hundreds of years throughout the history of art, mainly through the use of landscape as a metaphor to reveal the raw forces of nature. The impact of the best-known theory of the sublime, published in London in 1757, was exceedingly influential in the 18th century. Nick Archer and Jenny Pockley use photography as source material for their sublime landscapes reflecting memory and imagination, mysterious frozen moments of revelation and deep understanding.

With a depth of vision and a scale of multi-layered meanings Nick Archerʼs paintings possess a Lynchian quality that suggests a dystopian vision of the world in crisis, a journey at an end. His seemingly enchanted landscapes are influenced by fairy tales and children’s literature as Snow White or Alice in Wonderland. The colour and also the power of nature and its sublime qualities are central to the art of Nick Archer. With a dominant colour in any composition and another colour which reacts to the dominant, the artist is looking for a balance between harmony and discord and for the colour to create an atmosphere of beauty and yet menace. Nick Archer’s landscapes, which at times focus on a point of interest such as a caravan or abandoned vehicle, are a witness to the vulnerability and isolation of our human condition; the paintings attempt to explore one’s place in the world.

Nick Archer lives and works in East Sussex in England. He studied at the Royal Academy Schools in London. He has exhibited extensively in the UK and Europe including solo exhibitions with Louise Alexander Gallery, Porto Cervo, Italy, Sarah Myerscough Fine Art, London, Long and Ryle, London, and Galerie Hug, Paris. His past exhibitions include the National Portrait Gallery in London, the Wandsworth Museum, London, and the Maison de la Culture in Metz, France. Nick Archer has been represented by Gowen Contemporary since 2013. Gowen Contemporary has exhibited his work in Geneva in 2014 and 2017.

The paintings by Jenny Pockley bring romantic instincts to the fore. Through cloudscapes, the artist works with diffused light and soft shadows which lean towards abstraction. These monumental paintings evoke the sublime and the ethereal. Like a window on the sky, Pockley’s works recall the clouds of Gerhard Richter or the skyspace by James Turrel. She builds up the layers of colours as thin veils so that any evidence of brush mark or texture that would draw our attention to the surface are softened out. Like the works by Mark Rothko, the paintings of Jenny Pockley are suspended in time. Appearing to hover, the clouds envelop the viewer creating an intangible experience.

Jenny Pockley lives and works in East Sussex in England. She studied at the Royal Academy Schools in London. She has exhibited extensively in London. Her work was also shown in Bath, Paris, New York, San Francisco and Toronto. She has gained numerous commissions both private and corporate including for the Waldorf Astoria group and Tiffany’s. Jenny Pockley has received a number of esteemed scholarships and awards, including the Landseer Scholarship, the Worshipful Company of Painters/Stainers Bursary, the Leverhulme Trust Scholarship, the David Murray Travel Scholarship, the Elizabeth Greenshields Foundation Award. Recently she has exhibited at the Beaux Art Bath Gallery and Long & Ryle Gallery. Beyond the Sublime is the first exhibition of the artist in Switzerland.