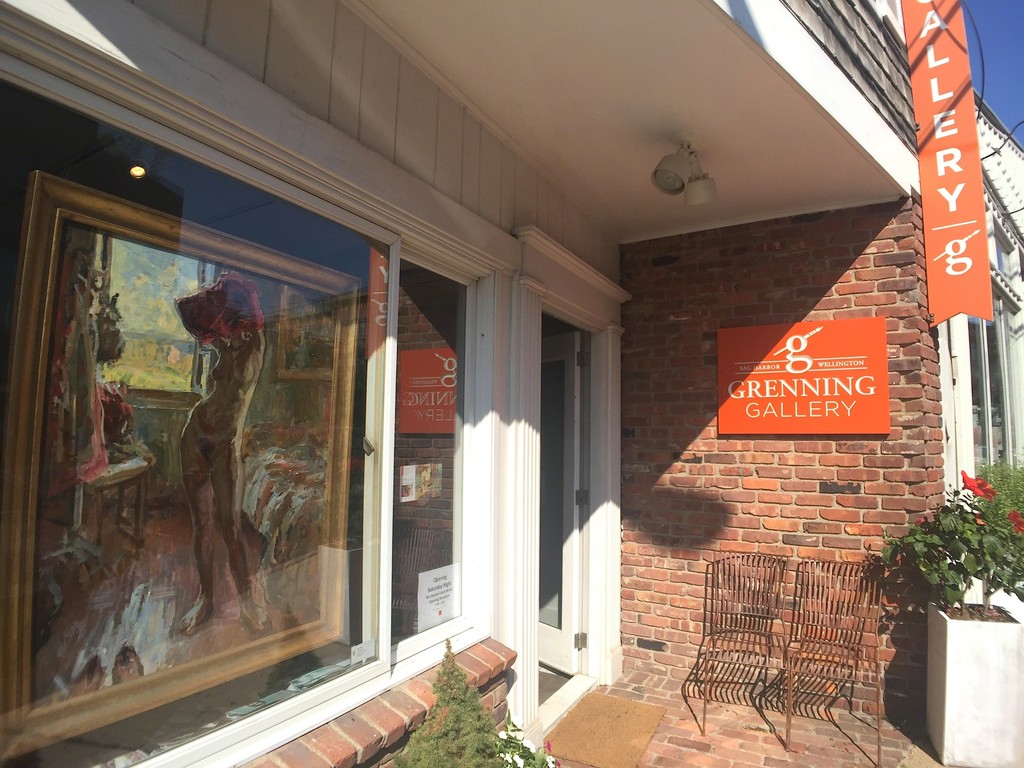 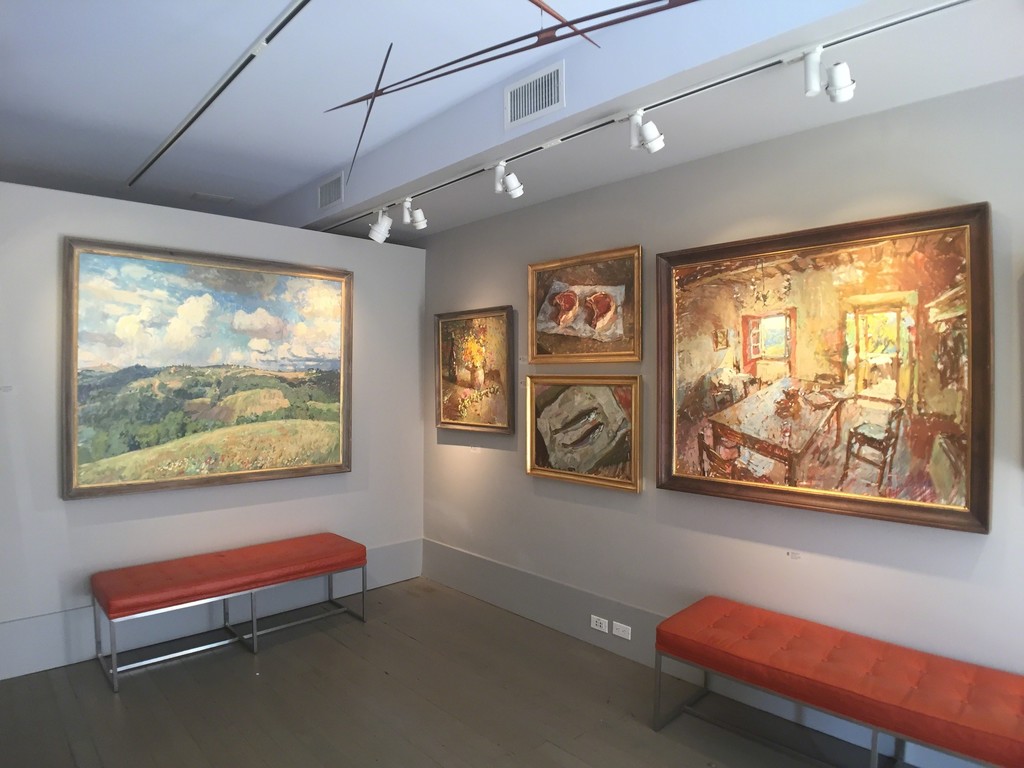 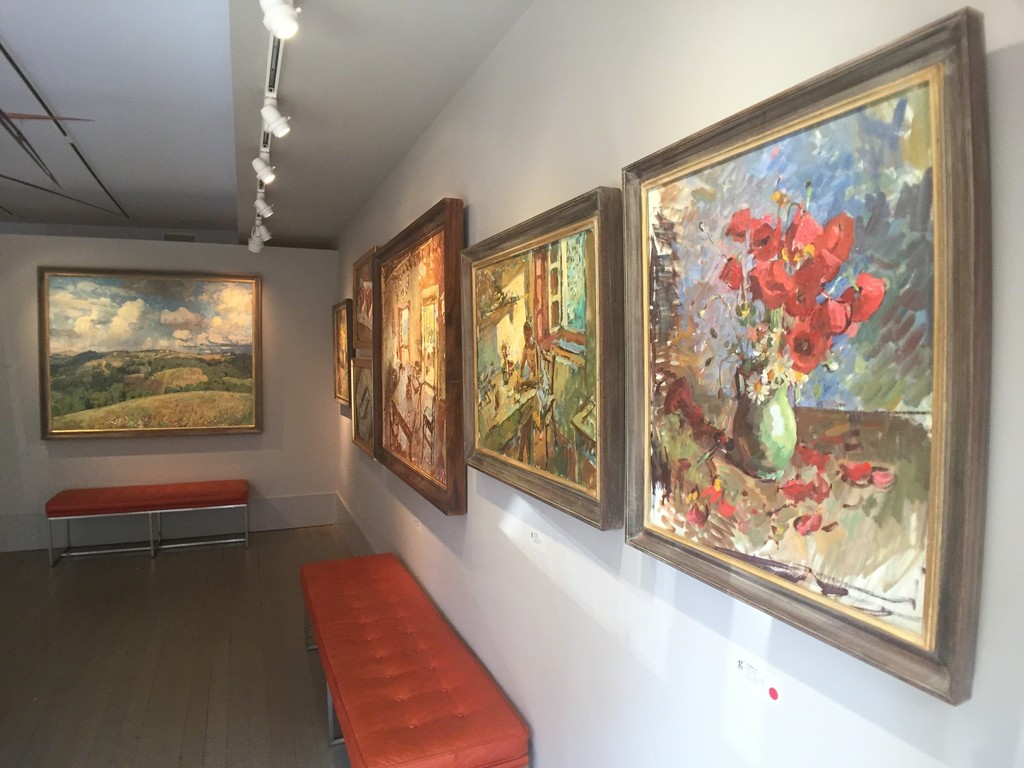 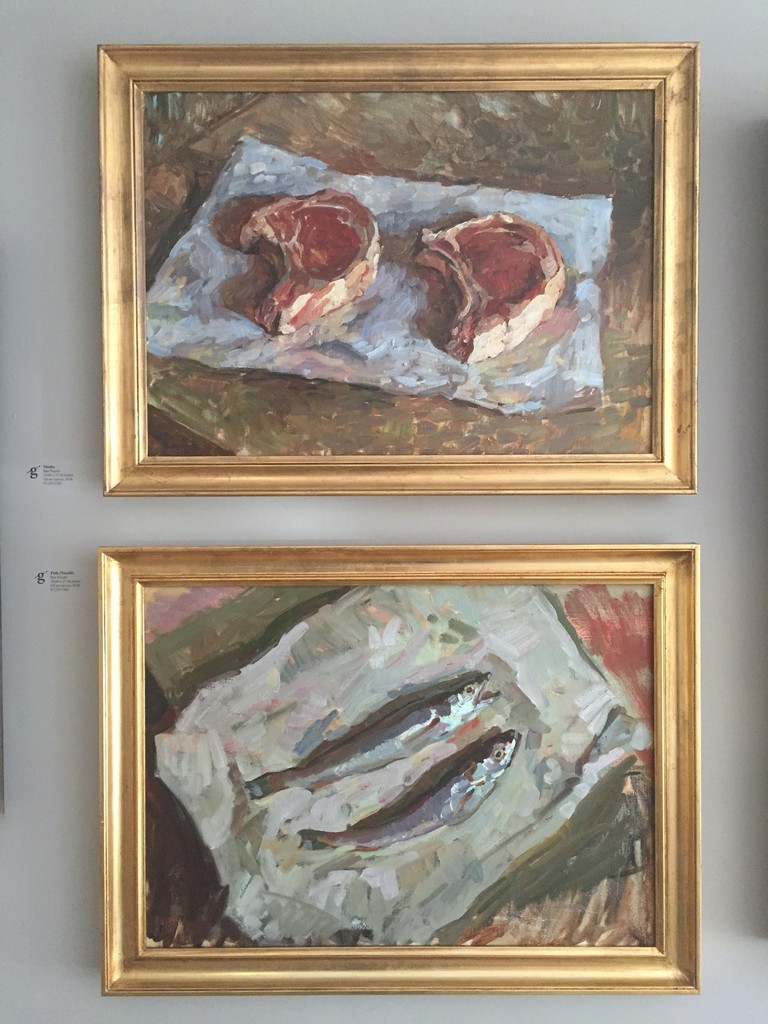 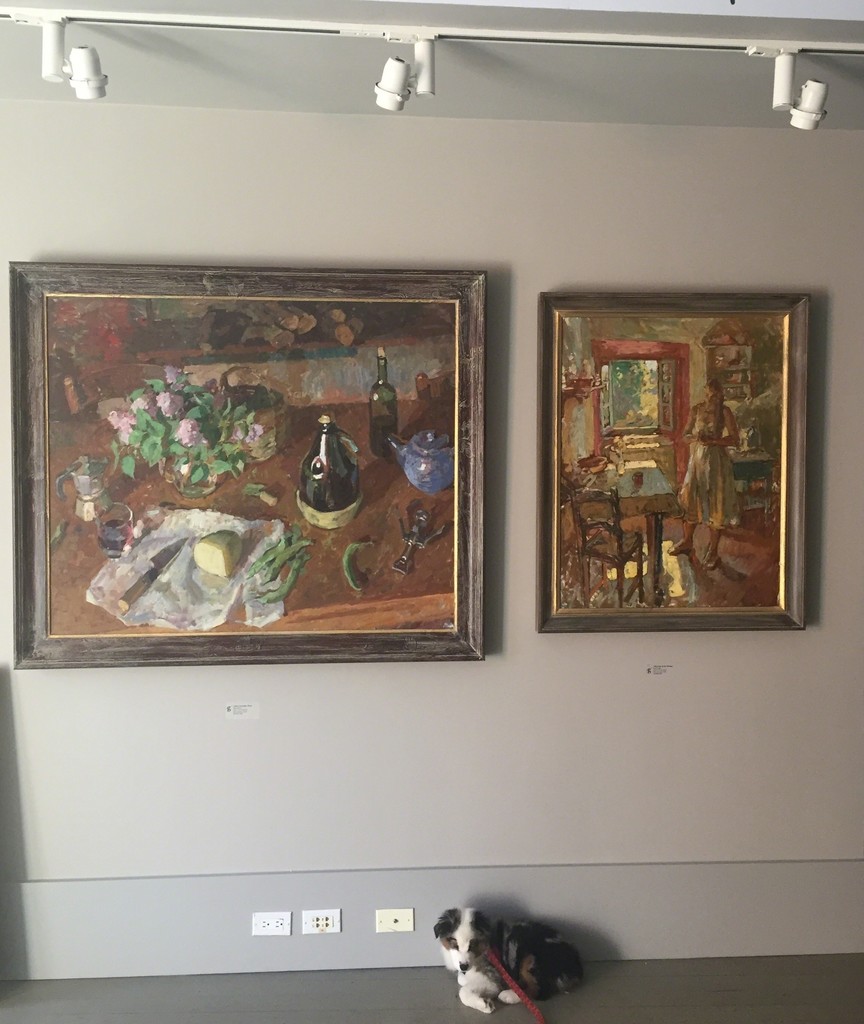 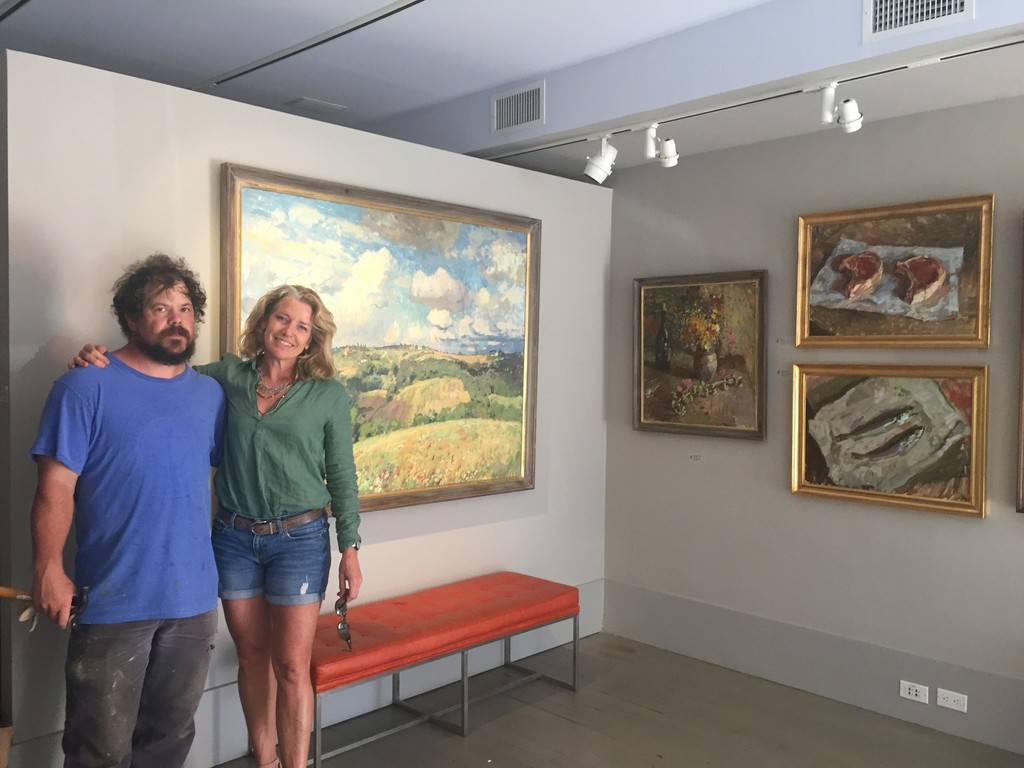 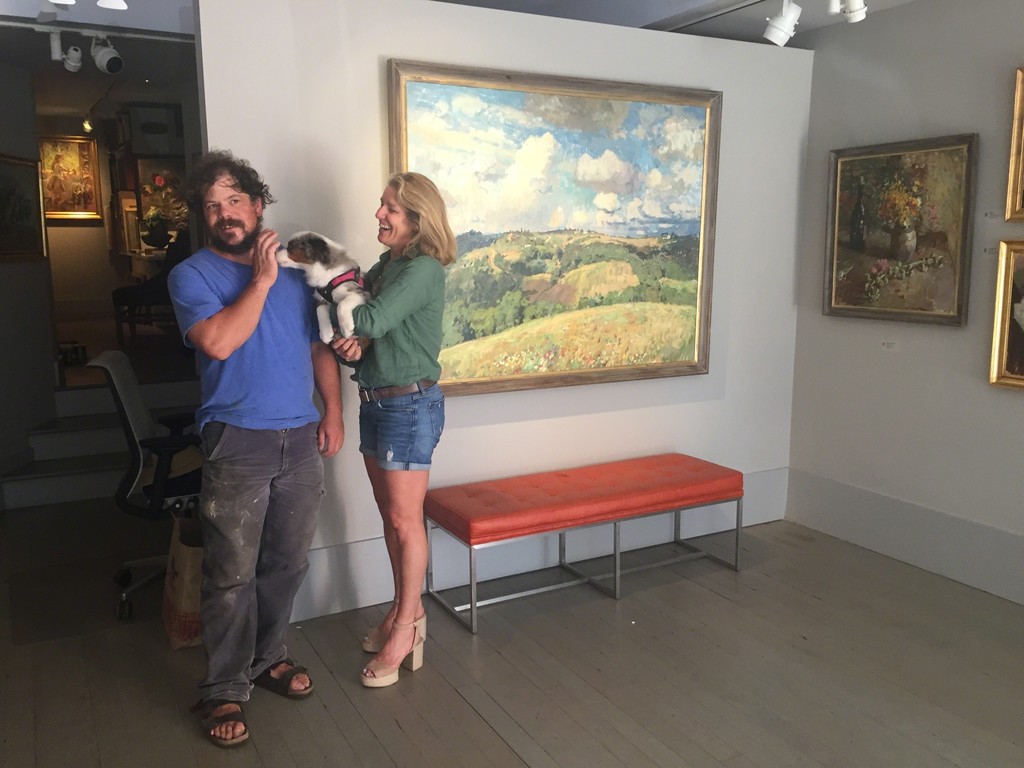 Please join us for the Opening Reception of Ben Fenske’s Solo Show on
Saturday August 25th, from 6:30 to 8pm at the Grenning Gallery, 17 Washington
Street, Sag Harbor. This exhibition will be hung on August 23rd and hangs until
September 16th.
Ben Fenske (b. 1978) continues to deliver top notch works – this year he’s turned
his attention toward home and hearth – painting more interiors and still lives, and a
few gorgeous fully finished landscapes in and around his home in Greve, in the
Chianti region of Italy.
“Poppies I” recalls the best of the still lifes we have seen in the last 150 years –
with an evocative red color set against the neutral khaki tones and blues. One
might be induced to recall the colorful, brushy still lifes of the famous
impressionists: Van Gogh, Cezanne, Bonnard, or Renoir. “Poppies I” is a slightly
more formal painting of poppies on a book and is a great foil to “Poppies II”
another iteration. This second painting is an almost cubist breakdown of the
original composition. One senses Fenske’s complete love and lust for the color
and the specific shapes of THESE flowers, as he allows the subject to dictate his
marks. “Poppies II” is bordering on true abstraction, yet somehow very true to
nature. This is a Grenning Gallery sweet spot, and exactly what we are fascinated
with at this stage in the development of the classical realist movement. We look
for paintings that capture the true FEELING of the subject, rather than crossing the
T’s and dotting the I’s of every descriptive detail. The ultimate irony is that the
ability to paint accurately is the STARTING point for an artist to then break down,
back away from formal repetition of nature and then to see them manipulate their
medium to serve the emotional purpose of the painting. A painter like Fenske is so
confident and accomplished in his facility he is willing to let go of all of the marks
that are not necessary. This precise elimination of unnecessary strokes leaves us
with a series of deeply poetic impressionist paintings of his actual life.
“Clouds Building” is a large-scale painting celebrating the view of the lush valley
he calls home. Dots of paint, depict flowers in the foreground. Beneath the slope of
the first hillside, a verdant area rests in a dense shadow. The cause is from the
thick, heavy, grey cloud above, which intersects the center of the painting’s topmost
edge. Fenske has masterfully defined the distance between cloud and ground,
placing the viewer, at ease, on top of the Tuscan hillside.
“Lilacs, Pecorino, and Wine” is a wonderfully balanced and original still life,
created on his dining table. The elements of simple, yet satisfying life are presented
in this contemporary painting which somehow lacks all stuffiness that one might
expect when we envision a “still life”. It encompasses all the basic necessities of a
humble lifestyle in the Italian countryside. Flowers, espresso, wine, cheese, fresh
veggies, and drinking vessels lay at rest atop a rustic wood table, glowing with
natural light.
In “Sunlit Interior” we have a bright and colorful painting of his empty kitchen. And of course,
the cover of the postcard depicts the same room but occupied by a young woman, and that’s
simply called “Kitchen”. He continues this series with two canvases of similar compositions:
“Kitchen Interior” and “Afternoon in the Kitchen”. Both illustrate the same corner of the room,
floodlit by the wide open window, which creates a hued atmosphere of blues or seafoam.
Outlines are prominent in “Kitchen Interior” and appear to soften in “Afternoon in the Kitchen”;
Perhaps a nod to the incorporation of the delicate female form.
It was Ben Fenske who invited his fellow Russian painters to come paint in Sag
Harbor in 2016. His efforts to organize a reciprocating invitation to the one he took
to paint in Russia, actually spearheaded the foundation of the very successful
Russian American Painting Alliance. There will be Another show of this group on
October 20th, 2018.
As Fenske approaches the end of his thirties, his career is continuing to catch the
eye of important institutions, having been selected to show at the National Portrait
Gallery in London as part of the BP Portrait Award contest. He was also hand
picked to paint in Russia by their government in the hometown of Levitan, one of
Fenske’s major influences. Fenske has also been the subject of many articles
indicating that he is one of the most interesting painters to watch in this upcoming
generation. (http://www.grenninggallery.com/artistdetail-110.php.)