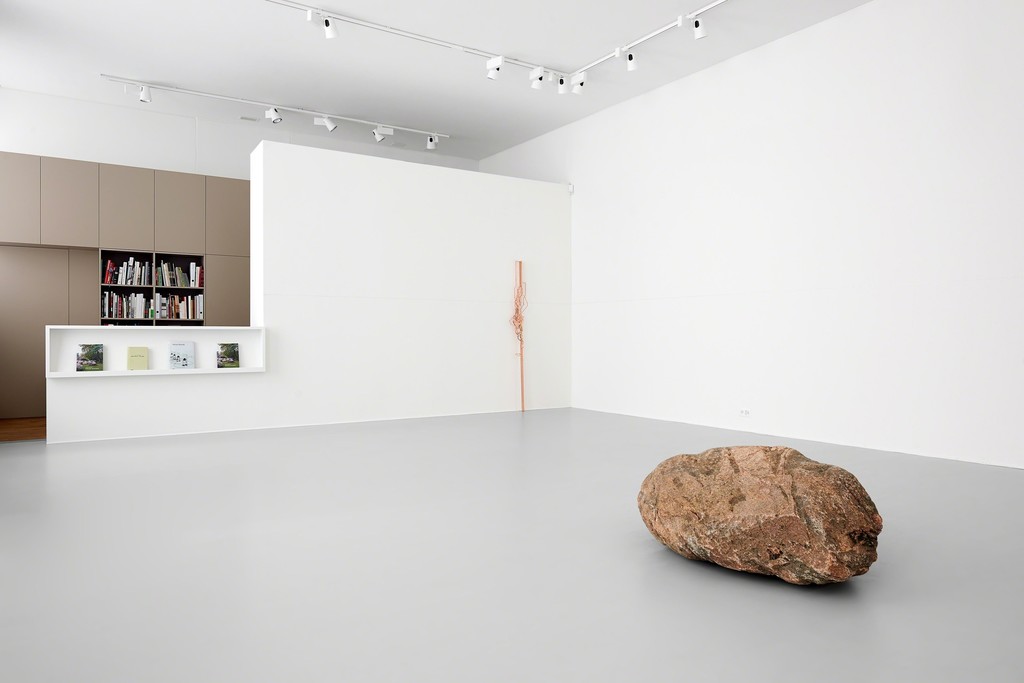 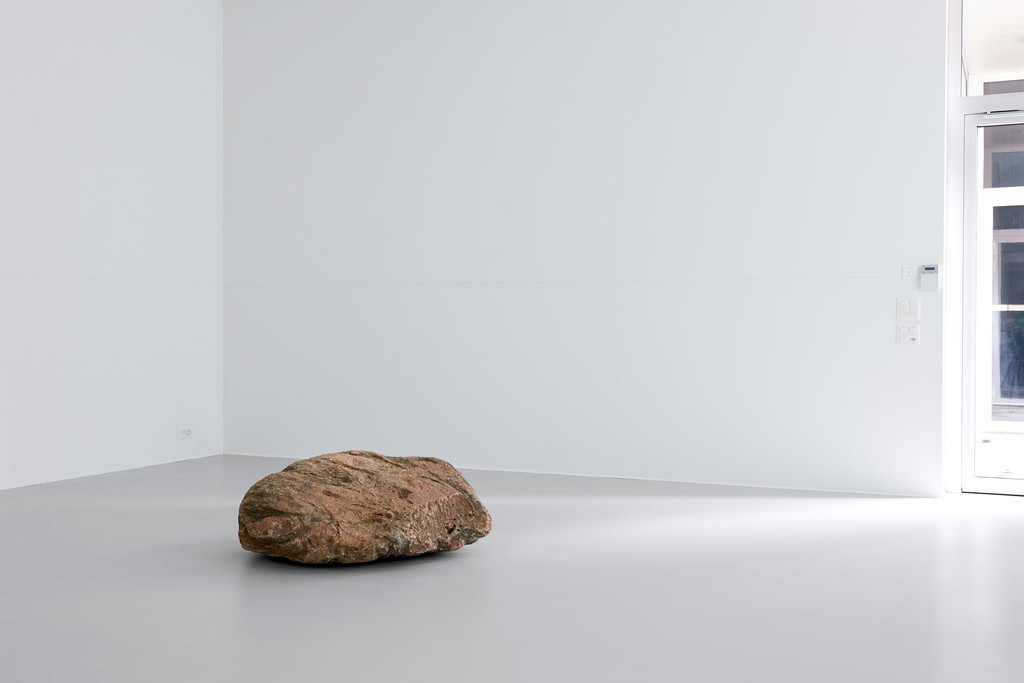 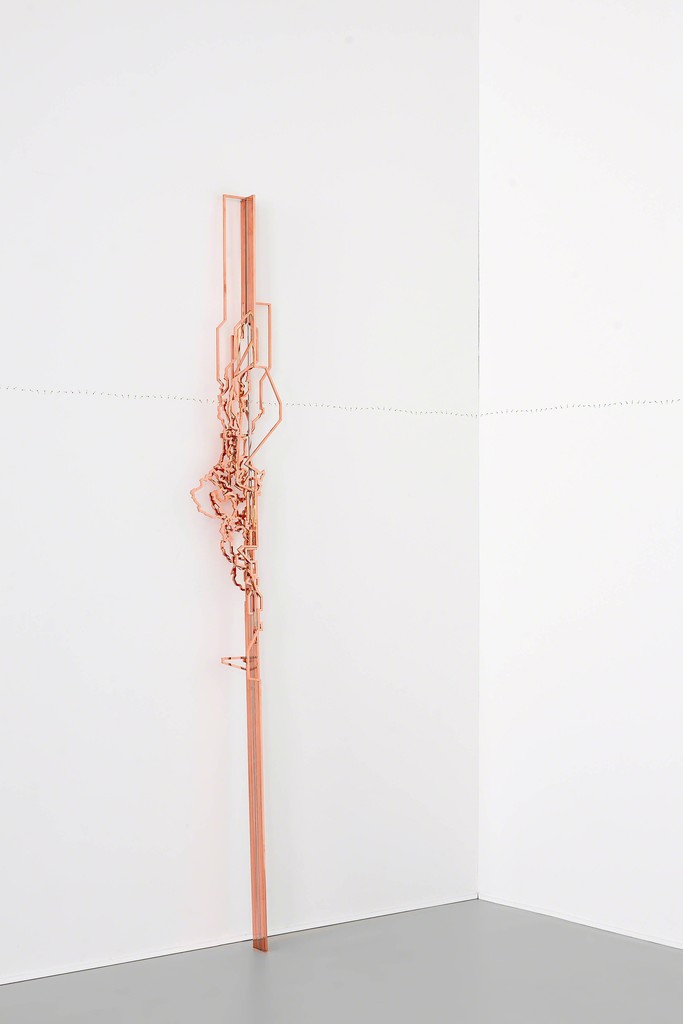 Grieder Contemporary is delighted to be presenting Alicja Kwade and Silva Agostini, two artists seeking to shift the perceptions of their audiences and engage them to consider concepts and phenomena – of which time is one – that we take for granted in normal life, but which cannot really be grasped and which, to this day, have never been fully explained in many scientific disciplines.

Alicja Kwade wishes for her viewers to invest time in her works. On entering the exhibition space, the first thing you see is a large stone lying on the floor. To what end? Titled Stellar Day, this is not just any stone, but a "glacial erratic" – a block left behind after the Ice Age. This unimaginably long time span resonates with the monumental presence of the stone, as it does with the emergence of the Earth and hence the origins of the cosmos. Spend enough time in the room, and you notice that the block is slowly rotating clockwise, countering the rotation of the Earth. Almost miraculously, what this is doing is turning the earth's rotation into a physical experience for the viewer. Kwade has matched the rotational speed of Stellar Day to that of the Earth. A complete period of rotation takes 23 hours, 56 minutes and 4.099 seconds – the duration of a sidereal day. Sidereal, not solar, time is used in astronomy, and is measured relative to what is known as the vernal point.

Kwade explores issues surrounding the measurability of time in a minimalist, restrained mural. Minuscule watch hands have been placed a set distance from each other along an imaginary straight line set at eye height around the walls of the room. The hands are pointing in directions corresponding to the hours on a dial. Walk around the work and you notice that the hours turn into days with every step. The room is being measured in time, as it were, and the viewer becomes a watch by virtue of walking around and counting. From a purely formal point of view, this longitudinal display of time with its wave-like movements is reminiscent of a river and calls to mind Newton, according to whom time is "absolute, true and mathematical (...), of itself, and from its own nature (flows) equably without regard to anything external." This interpretation corresponds to our everyday understanding of time. And yet Kwade's sensitive, complex mural installation and her glacial erratic suggest that time is much more than what we, with our limited everyday perspective, are capable of grasping. She leads us to sense that time since Albert Einstein is no longer absolute, but relative, and that space, motion and gravitation are interrelated.

With her video Fractal Release (7:05 min), Silva Agostini introduces us, like Alicja Kwade, to complex time-space-motion continuums. We see a runner pacing around a simple stadium encircled by drab apartment blocks. The immobile camera captures a section of the venue. The runner starts by being in the picture, then disappears from the angle of view. Time seems to drag. By the runner's second lap, the camera has moved closer to the chosen angle of view and a psychological perception of time in the form of boredom sets in. It becomes apparent that things could continue like this for ever. Then, all of a sudden, the pattern is interrupted and photos of handwritten notes appear. Shortly afterwards, another development: the camera shows the track from the perspective of the runner. It shakes up and down and moves around; it oscillates.

Forming the basis of Agostini's video are her grandfather's log books, in which he recorded in minute detail the times and records achieved by Albanian athletes over a period of more than 50 years – irrespective of changes in the political and social context. Agostini's cinematic referencing of her grandfather's descriptive statistics logged many years ago is redolent with the absurdity of the runner completing his lap after lap, the meaning of which and reason for doing so appear to be solely for the sake of recording his times. Agostini, however, goes one step further by achieving – in best epistemological tradition – a shift in perception. As with Kwade, she is suggesting that time is not necessarily simply a succession of events, but, seen from a physical perspective, is dependent on the speed with which we move in a given space. This has even become measurable with the advent of the modern atomic clock. By contrast, what cannot be measured are our perceptions of time and happiness, which change as a result of the motion and which Kwade as well as Agostini are seeking to shift with their works.

Silva Agostini (*1979) lives and works in Berlin. She attended the Academy of the Arts in Tirana, and the University of the Arts Berlin as a master student of Christiane Möbus. Her multi award-winning works have been shown in numerous solo and group exhibitions in Germany and Europe, including at the Nassauischer Kunstverein Wiesbaden, the Muzeul National de Arta Contemporana in Bucharest, the National Gallery in Tirana, the Tirana Biennale, the Biennale des Arts, Tunis, and the London Biennale, Berlin. She is a founder member of the TÄT project room, Berlin.

Alicja Kwade (*1979) lives and works in Berlin. She studied at the University of the Arts Berlin. A cross-section of her oeuvre is currently on display at the Kunstmuseum St. Gallen (in association with the Kunsthalle Nürnberg) and at the Bass Museum of Art, Miami. In 2015 she will have solo exhibitions at the Schirn Kunsthalle Frankfurt and Kunsthalle Mannheim (Hector Art Prize). Previous solo exhibitions have taken place at Kunsthal 44 Møen; Villa Tokyo, Tokyo; Kunstmuseum Krefeld; ZKM Karlsruhe; Kestnergesellschaft, Hanover; S.M.A.K., Ghent; Hamburger Bahnhof – Museum für Gegenwart – Berlin.