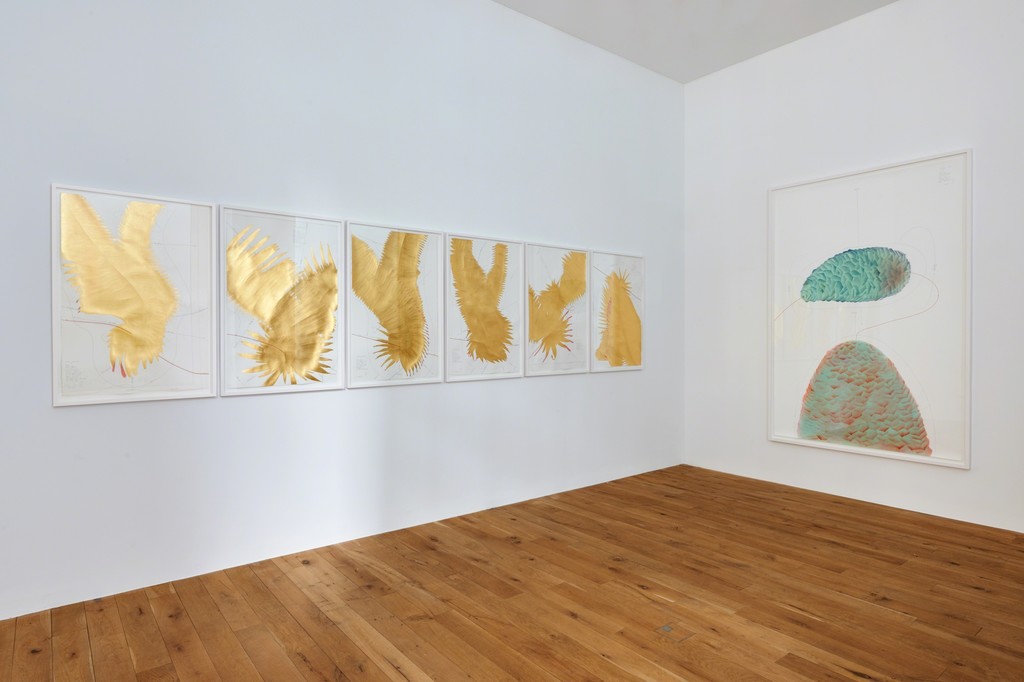 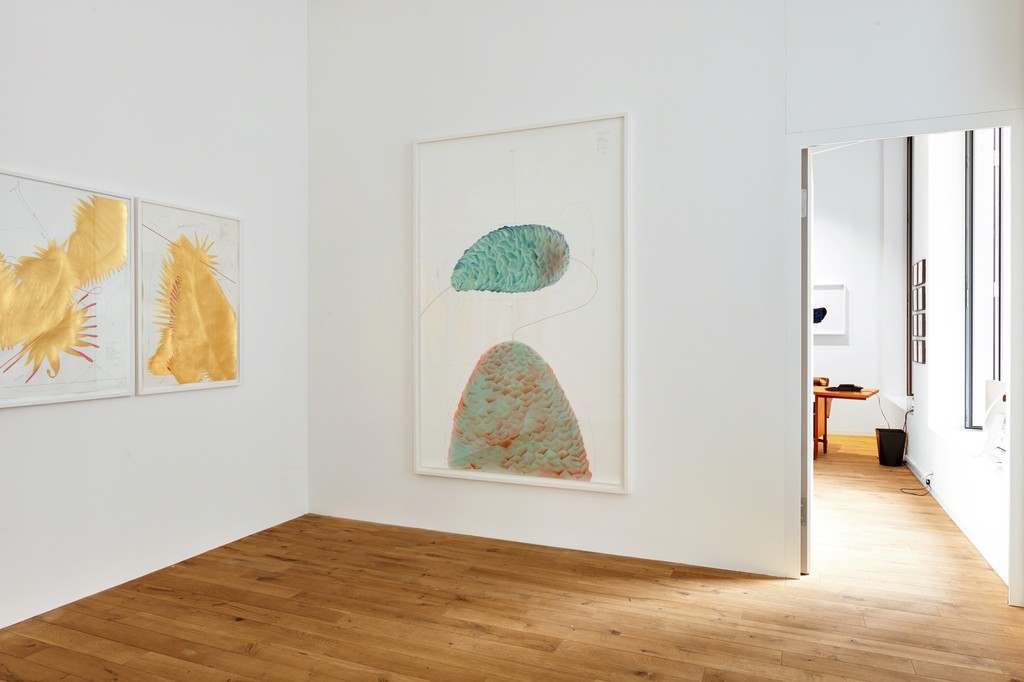 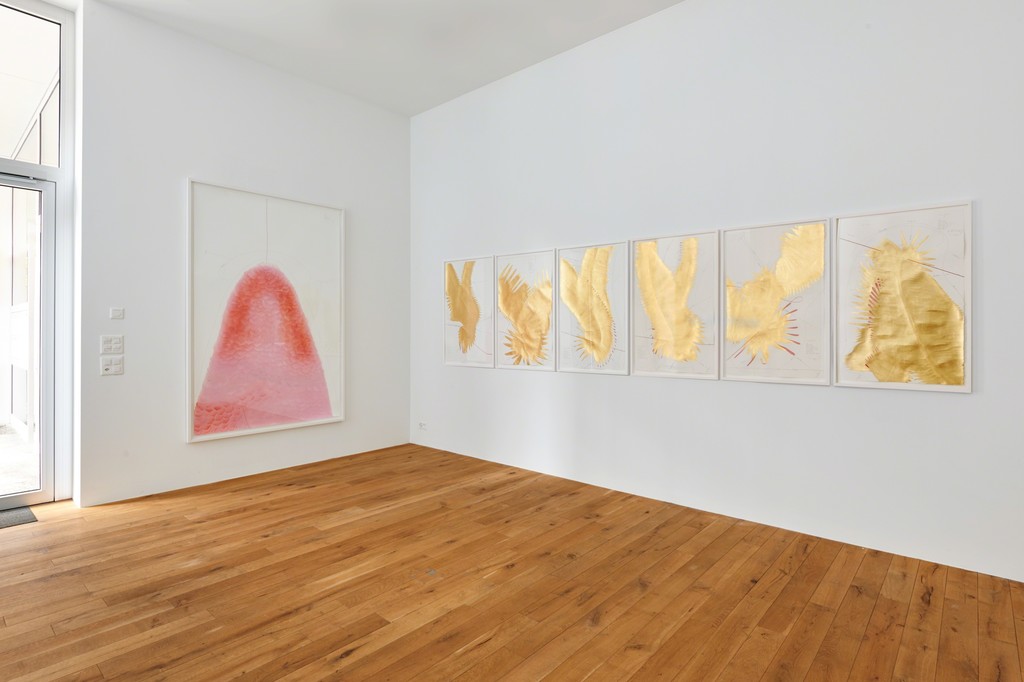 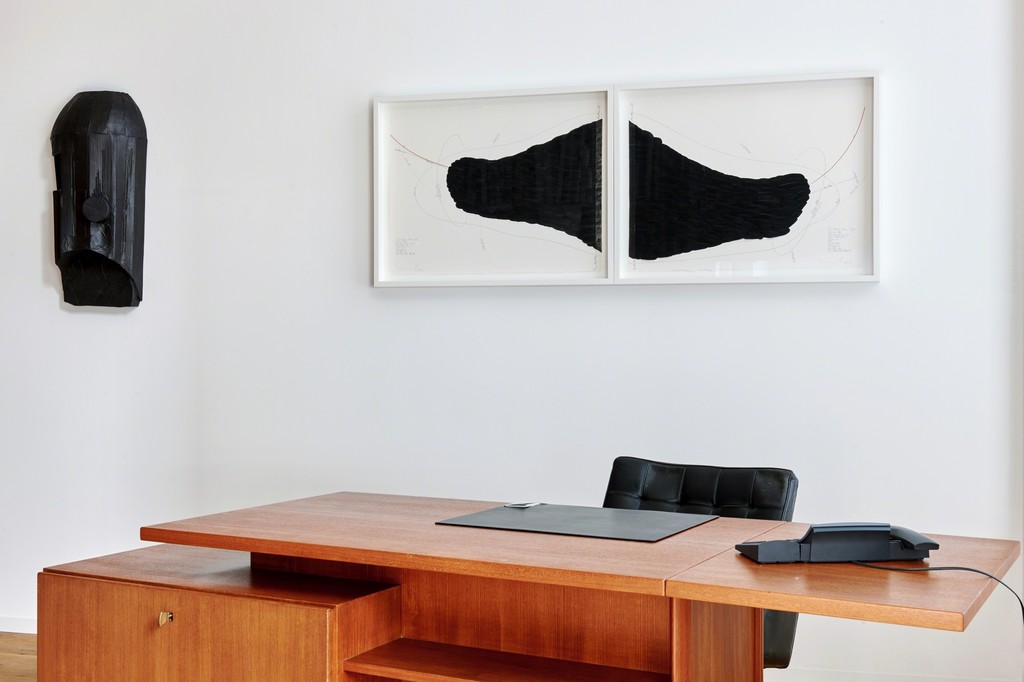 Grieder Contemporary is delighted to present You, the second solo exhibition by the artist Jorinde Voigt. Voigt is showing new works, which form part of a group titled Beobachtungen im Jetzt (Observations in the Now). These latter works find Voigt visualising neither hypothetical trial arrangements, as in her earlier drawings, nor taking music or literature – such as her works featuring Roland Barthes' Fragments d’un discours amoureux (A Lover's Discourse: Fragments) or the Beethoven sonatas – as a basis, but sourcing her forms and compositions from fundamental, causal considerations of perception and awareness-building concerning what she sees. The spontaneous, impulsive moment of Voigt's previous works in Beobachtungen im Jetzt – called "Splash" by the artist – is now no longer present. Instead, she is tending towards objectivism, which also finds its expression in the materials used: some of the works are fashioned from feathers.

The title of the exhibition is taken from the two works You I and You II. For Jorinde Voigt, "You" (second person singular as well as plural) is emblematic of the constantly oscillating character of self- and external perception – the basis of her observations in the now. The "Avatar" designation of some works in the group refers to this theme: in its original meaning, avatar signifies the descent of a divinity to earth and the deity's incarnation in flesh and blood; it is also the name assigned to virtual identities in the internet.

The two works whose names inspired the title, You I and You II, depict shapes strongly demarcated from the background; the shapes are composed of innumerable small, compacted figures resembling flakes or petals. These flakes have been rubbed from pastel chalk and, through the application of varying degrees of pressure, acquire, in places, a hint of three-dimensionality and a tender sensuality of colour. The two hill-like shapes on the two sheets find Voigt resorting to a motif that she has frequently used in the past. Voigt's "hill" works are rooted in her preoccupation with an archaic archetype of cultural and pictorial history: the mountain, which, as an abstract idea, embodies an accumulation of entities, a protuberance of things; something that needs to be climbed to be able to see further – but also something that can prevent one seeing anything at all.

With its delicate pink and light green petals, the composition of the large shapes of You I and You II evokes a range of associations: the observer, for instance, is reminded of flakes or petals, as alluded to above – both structures from nature with essentially positive connotations. On the other hand dense, regular sequences of surfaces in nature are also used for partitioning, protection or a shield against the environment – a technique that man has co-opted, for example, to create armour. Even though Voigt hints at an Indian depiction of lotus petals from the 18th century – which portrays the lotus as one of the central poetic images and visual icons of Buddhism – as providing inspiration for her "flakes", the question remains as to whether we are seeing something "real", something representational, or merely an idea. What interests her, rather, is the cultural process that creates something abstract, universally applicable or metaphorical from a "real" shape found in nature – a process not dissimilar to the use of language and text as a technique for naming and describing things or feelings.

The technique of "visualised text" also provides the basis for the artist's Flügel-Algorithmus (Wing algorithm) series. For a long time now, Voigt has been preoccupied with the themes of flying, wings, aircraft, trajectories and birds. She has principally been exploring the archetypal character of flying and of certain birds, such as the eagle. In her investigations into the representation of wings in the history of art, Voigt became aware of the high degree of abstraction practised by Pietro Cavallini in his depiction of angels' wings in his fresco of the Last Judgment (1293) in the Church of Santa Cecilia in Trastevere: this found him making use of an algorithm, i.e. a clear sequence of painting steps, to establish the shapes of the wings. The wings should therefore not be seen as depicting a real body part, but as "visual communication". They are text that tells of the idea of flying. The desire to fly has been a consistent theme in the history of mankind, which explains why almost every culture associates flying with the celestial, the divine.

Voigt has now adopted the algorithms developed by Cavallini as a basis for her shapes fashioned from gold leaf inlay, and taken the idea of visualising abstract concepts to the next level: shorn of angels' or birds' bodies, her wings have become autonomous objects, since they have now become a form of written text, coming within the pictorial realm in a variety of ways and adopting shapes that are quite different to those of traditional representations of wings. Voigt takes her new shapes, as in You I and You II, and sets them in the form of a matrix consisting of various drawn lines. An axis and lines used to display the speed and direction of rotation place the shape in an arrangement of space and time that is constantly changing. The navigational aids "earth's centre" or sometimes "earth's surface" are also a reference to the underlying geographical aspect of the localisation. The red "Now" line in Jorinde Voigt's compositions is always the last addition: it epitomises the subjective description of the shape in the here and now. "Possible Now" thus stands for a possible, arcane shape.

The feather work From Behind Sideways Left / From Behind Sideways Right should be seen as an evolution of the wing algorithms and the two works You I and You II. The material used for the shapes is itself now autonomous, since it comes directly from nature: black feathers are packed in a dense arrangement to create a kind of natural rendering of an abstract algorithm – in the knowledge that the feather, being self-similar, is itself to a high degree an abstract structure. Whereas the Flügel-Algorithm works contain no feathers, these feature real feathers. The large shapes are far more reminiscent of the hills in You I and You II, while the feathers call to mind the pastel flakes, as well as the gilded wings of the Cavallini series. This finds Voigt combining a number of aspects: elements from nature are examined for their abstract, algorithmic potential and at the same time viewed as signifiers of cultural techniques, concepts and desires.

Jorinde Voigt (*1977 in Frankfurt am Main, Germany) lives and works in Berlin. Past years have seen her awarded important prizes and represented in international exhibitions, including at the Gemeentemuseum, The Hague; Langen Foundation, Neuss; Von der Heydt-Museum, Wuppertal; Nevada Museum of Art, Reno; and Ontario Museum, Toronto. Works by the artist may be found in collections as diverse as the Pompidou Centre, Paris; Museum of Modern Art, New York; Bundeskunstsammlung, Bonn; Kupferstichkabinett Berlin; Kunsthaus Zurich; and Staatliche Graphische Sammlung, Munich. Her next institutional solo exhibition takes place at the Kunsthalle Krems, Austria from 15 November 2015 to 14 February 2016.