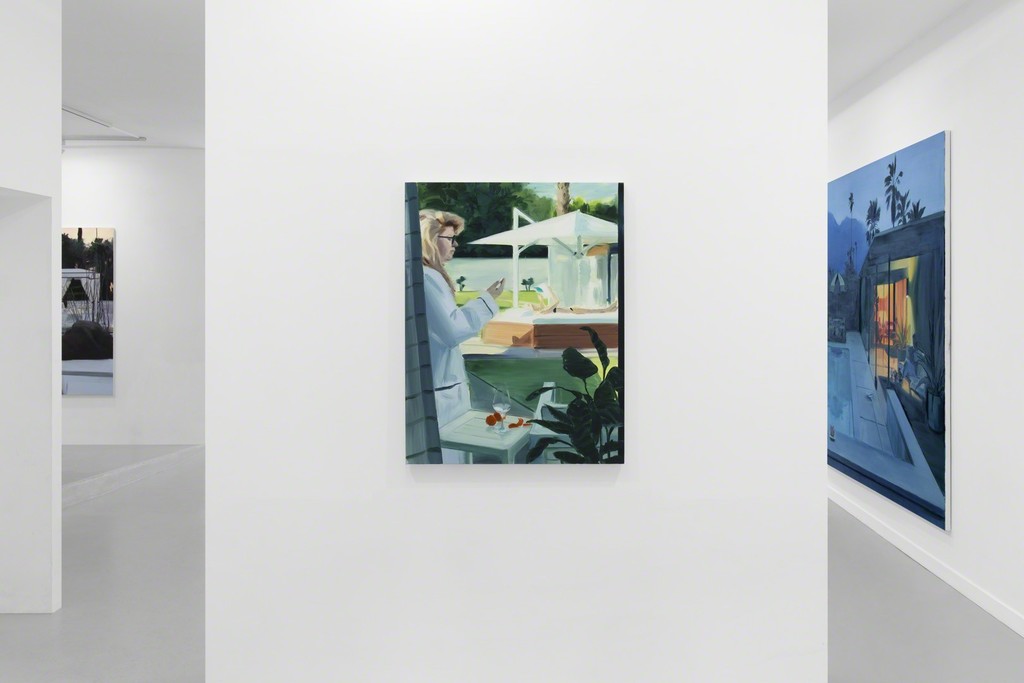 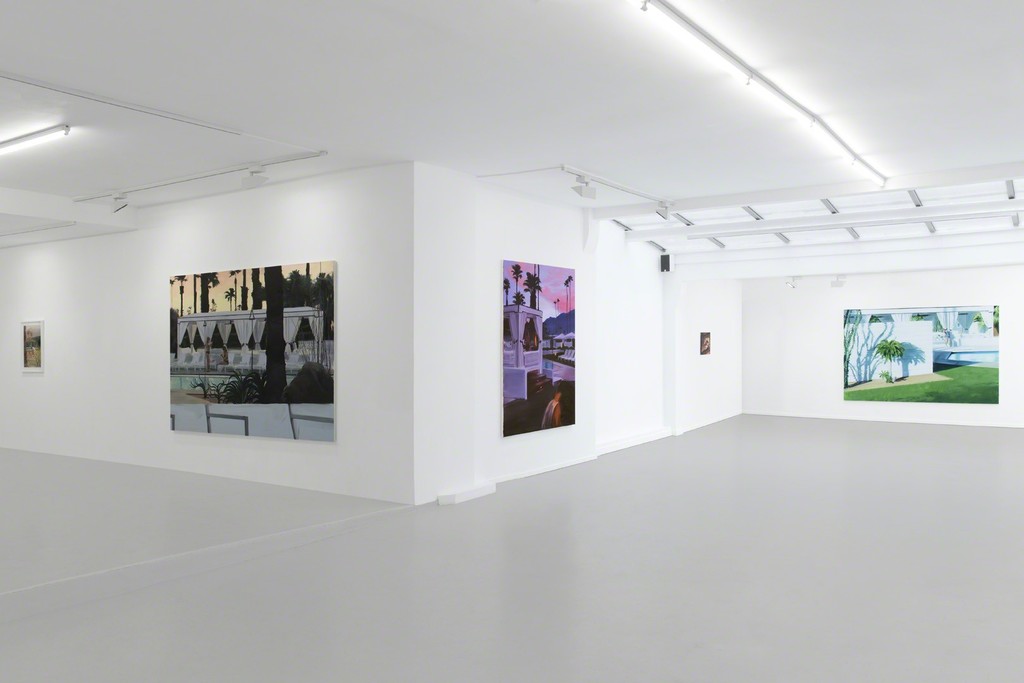 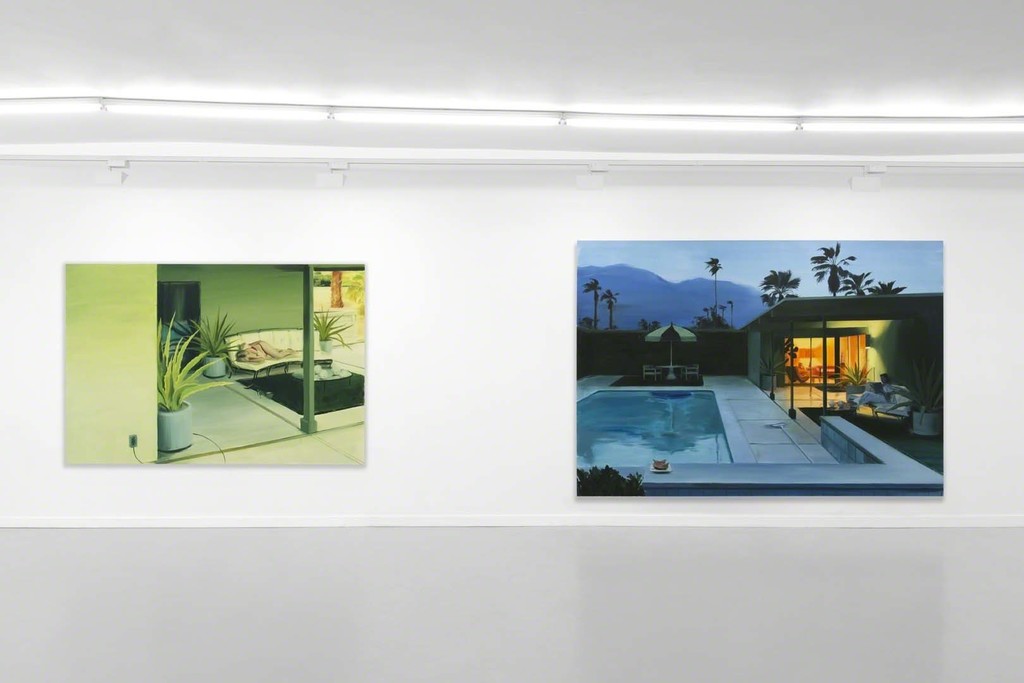 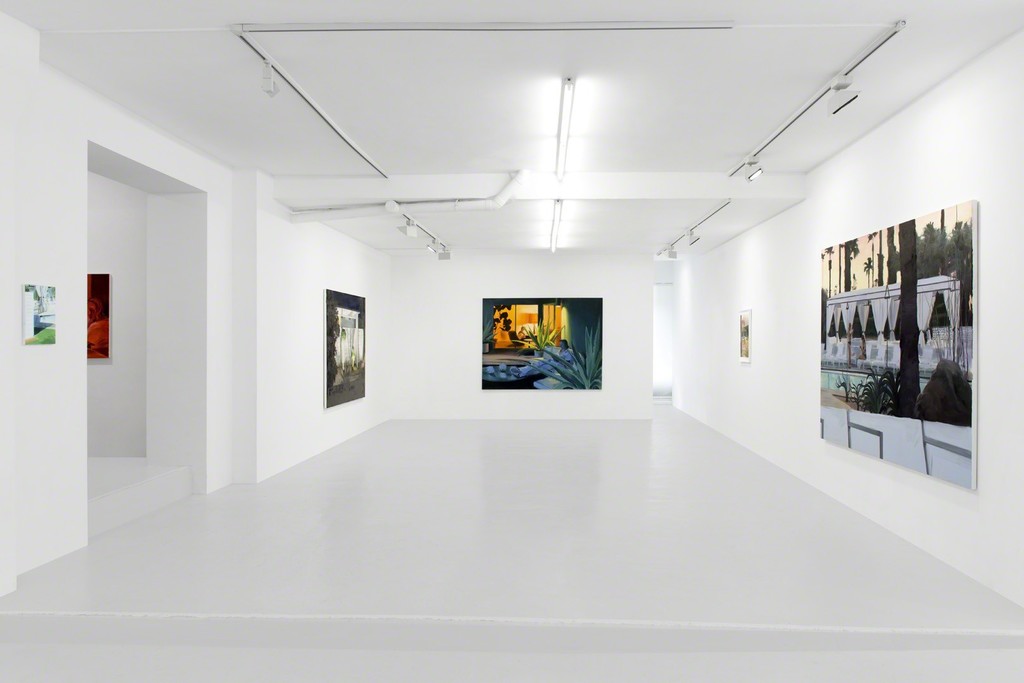 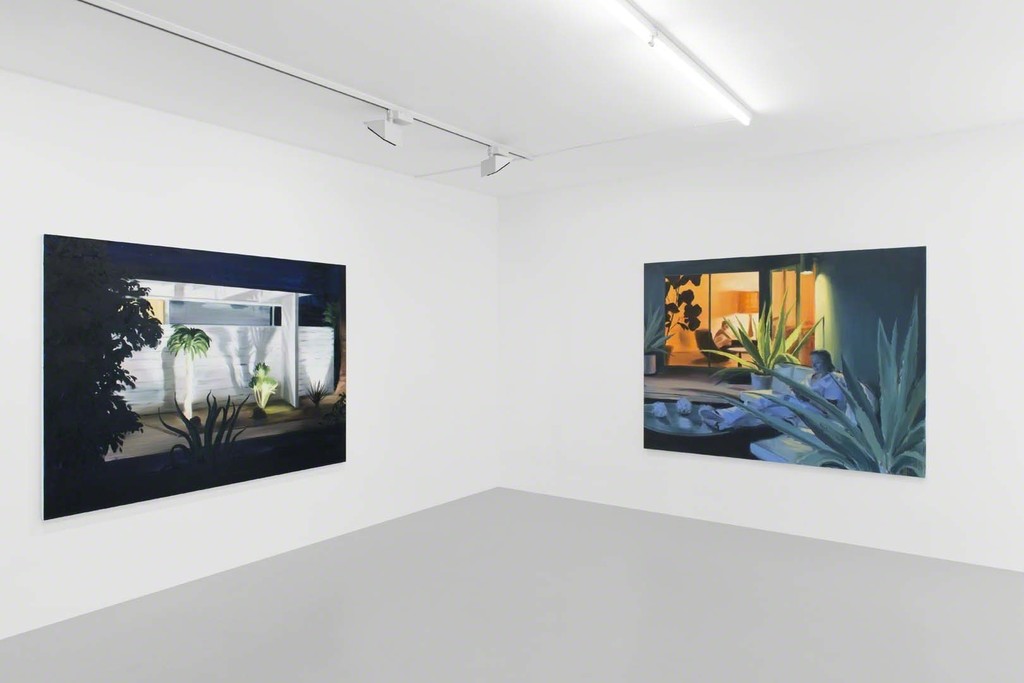 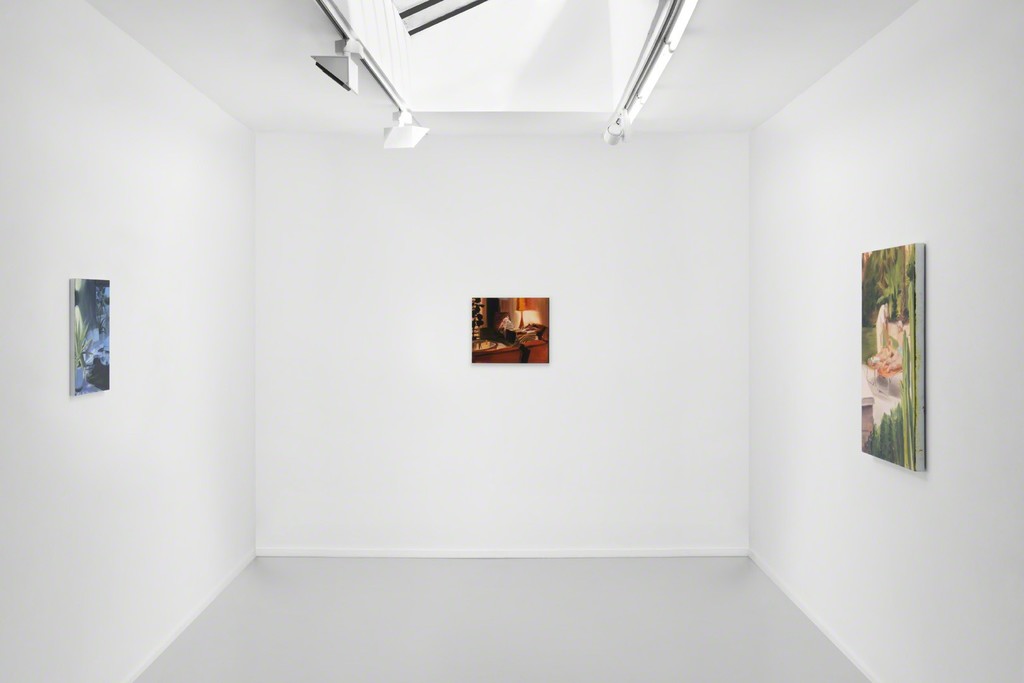 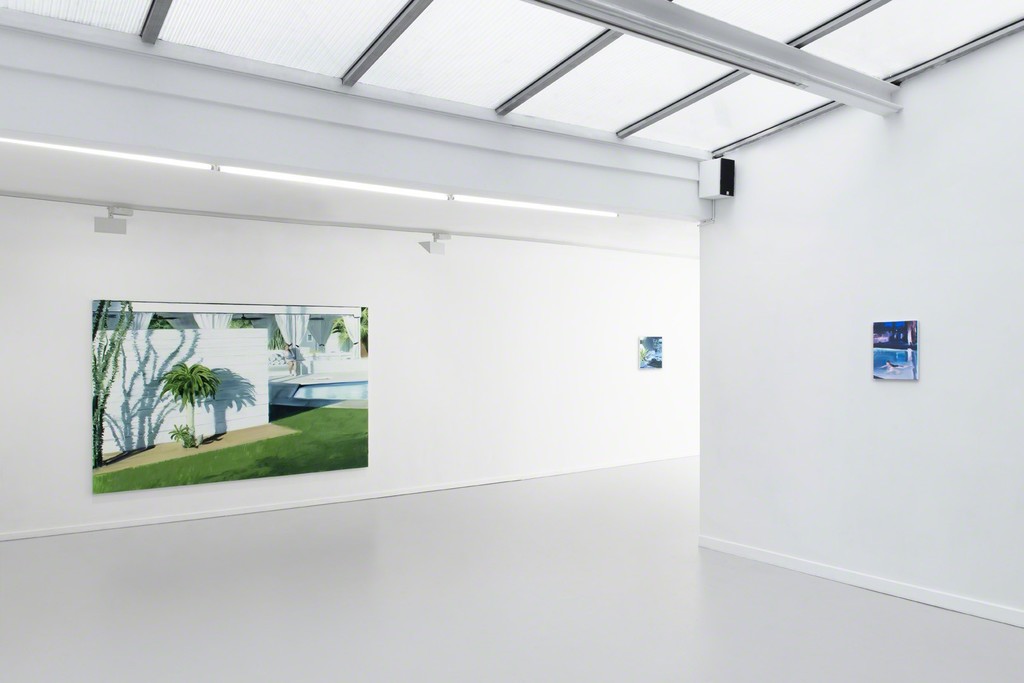 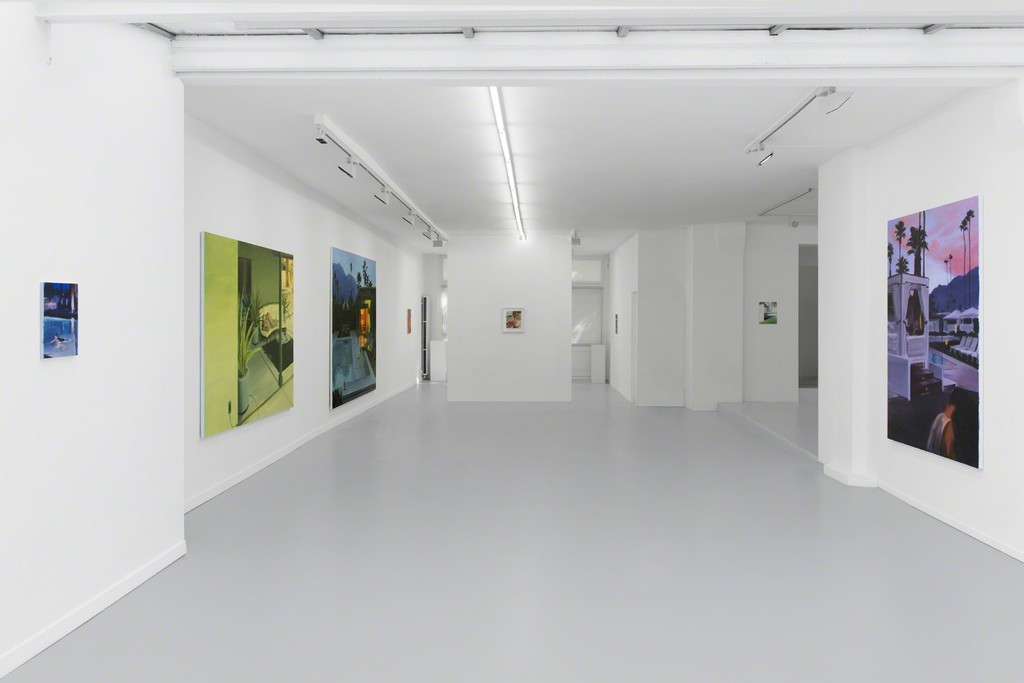 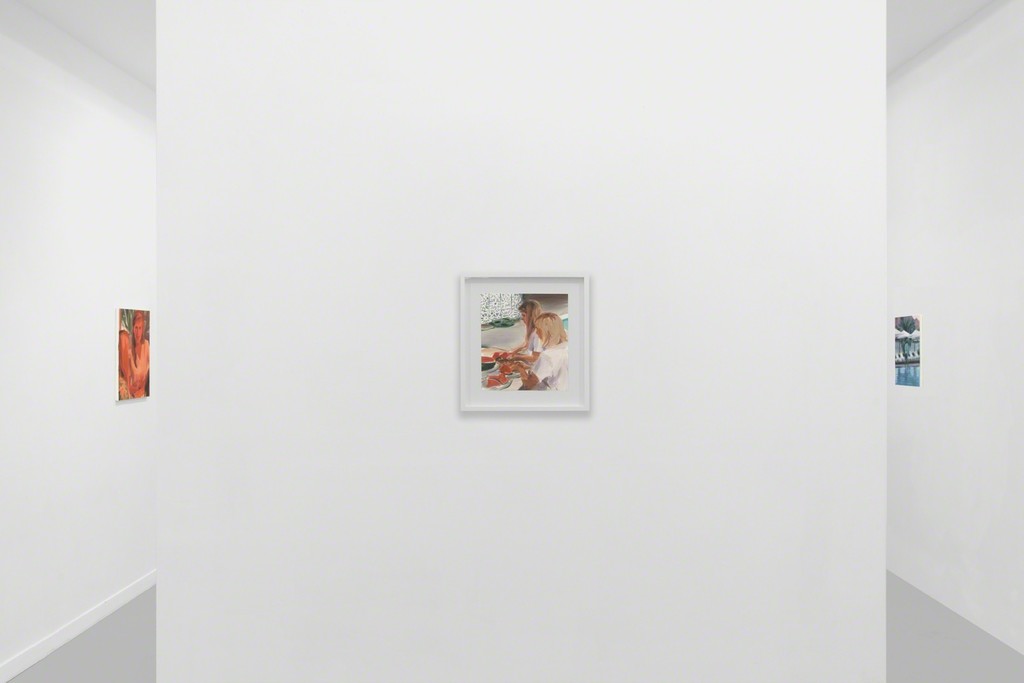 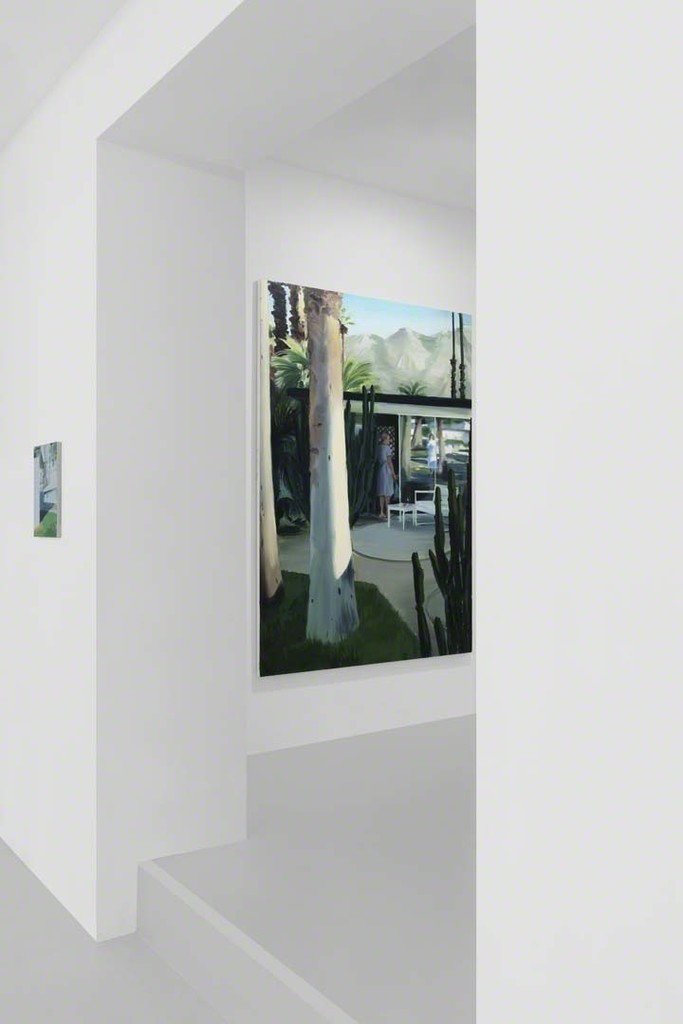 GRIMM is delighted to announce the first solo exhibition by Caroline Walker with the gallery in Amsterdam.

In 'The Racquet Club' Caroline Walker (1982, UK) presents a new series of paintings for which she chose Palm Springs (California, US) as a scenic backdrop. The desert city, once developed for LA’s upper class and Hollywood’s biggest stars in the 1920s, is famous for its midcentury-modern architecture and design. Palm Springs embodies an artificial sense of ‘the good life’ with its lush gardens, turquoise pools and cooling on-street water misting, all of which defy its desert location.

The city has often served as a source of inspiration for literature and film, as there is something about this manufactured would-be paradise that suggests the possibility of a darker psychological undercurrent. This is reflected in the title of the exhibition: ‘The Racquet Club’ was the name of a popular resort that opened in 1934, a place for excess that eventually crumbled into nothingness and that was demolished in late 20th century during a period of decline.

These days Palm Springs is enjoying a resurgence and is once again a destination for the rich and famous. Caroline Walker’s paintings give us a glimpse into their luxurious lives: using two locations in the city – a private house and a hotel, the paintings re-imagine the space of the resort club and the people that occupy it; from glamorous holidaymakers to the staff that serves them. Walker creates a filmic sense of narrative in her paintings by
combining the existing contents of the house, found imagery, fantasy and highly considered photo shoots with models on location. The resulting paintings serve as part documentary of a day spent in company of strangers, and part fiction.
The large canvasses in the exhibition depict architectural structures: walls of full height glass, open floor plans, outdoor swimming pools and low maintenance gardens with concrete flooring and sculptural desert plants.
Walker plays with perspective, offering glimpses of her models from different angles, while giving us a voyeuristic gaze into their lifestyle.
The smaller paintings in the exhibition bring specific objects and characters more into focus and Caroline Walker manages to capture the Hopper-esque desolation of her actors in their modern setting through exquisite paint handling and technical virtuosity.

Time passes slowly in these works, from the first light of the morning through the twilight of evening. The
preparation and eating of a watermelon being one of the few activities to punctuate a day.
In 'Sunshine Court', a typical Palm Springs landscape is presented to us, with a perfectly mowed apple green lawn, a tented canopy, palm trees, a high garden wall and a swimming pool. We discover a woman in a dress, sitting next to a pile of towels. It is not entirely clear whether she feels lonely, exhausted or bored. Is she the maid or the owner of the house? A beautiful illustration of existential crisis.

About the artist
Caroline Walker was born in 1982 in Dunfermline,
Scotland and currently lives and works in London. She received her BA (Hons) in Painting from Glasgow School of Art (2000-2004) and continued her curriculum (MA Painting) at the Royal College of Art, London (2007-2009). Where she was awarded ‘The Valerie Beston Young Artist Award’, the ‘Neville Burston Award’ and the ‘Tom Bendhem Drawing Prize’ in 2009.

Caroline Walker’s work can be found in many international private collections, among them the Ekard Collection and The Franks-Suss Collection.