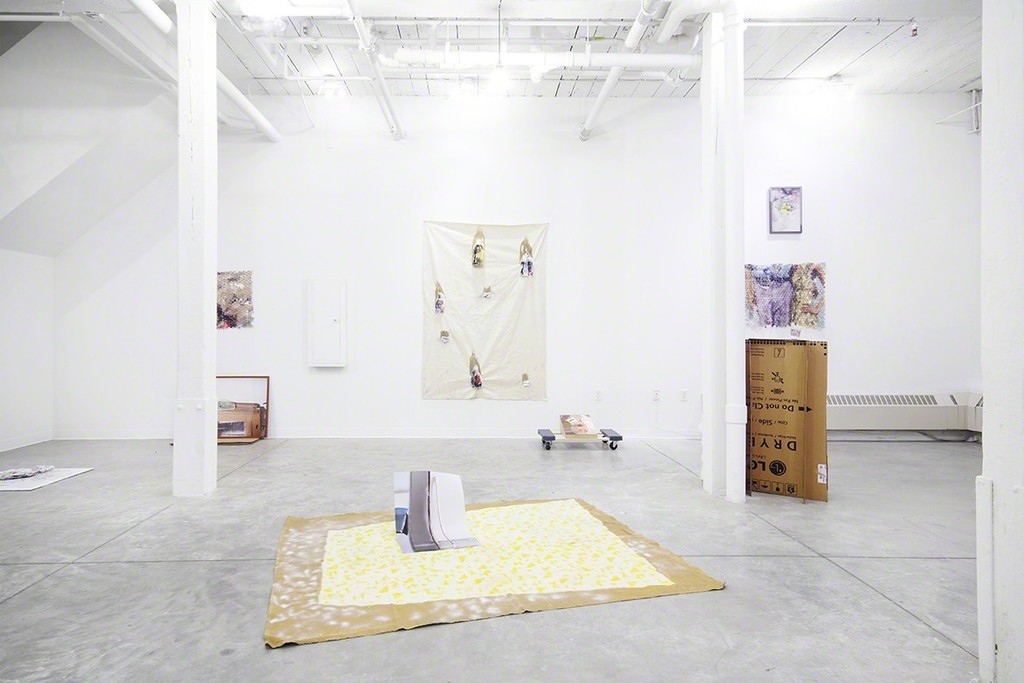 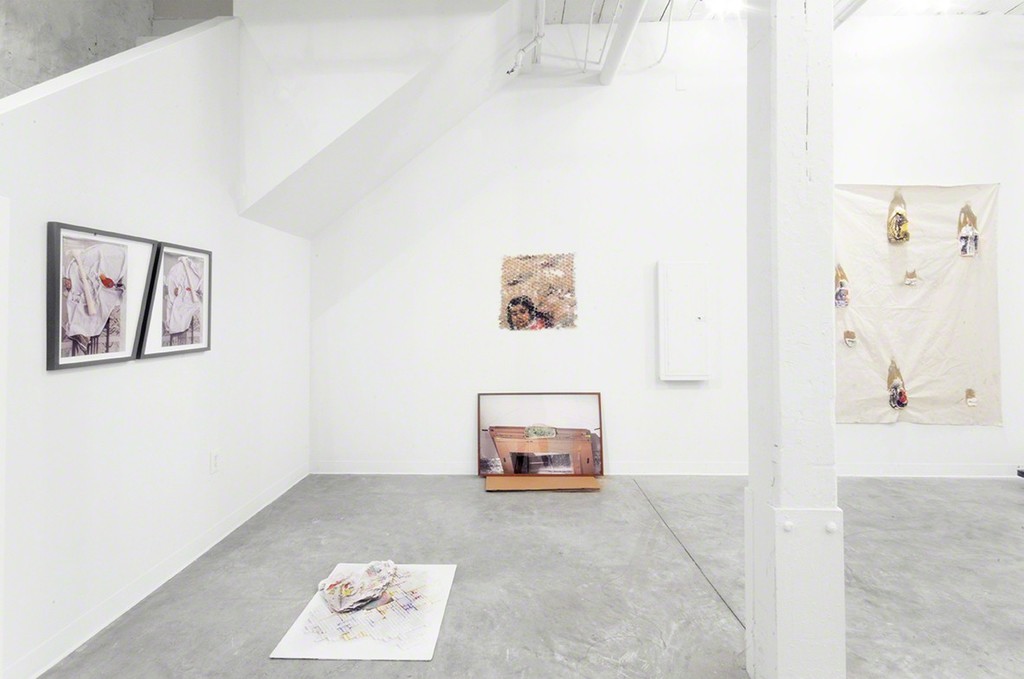 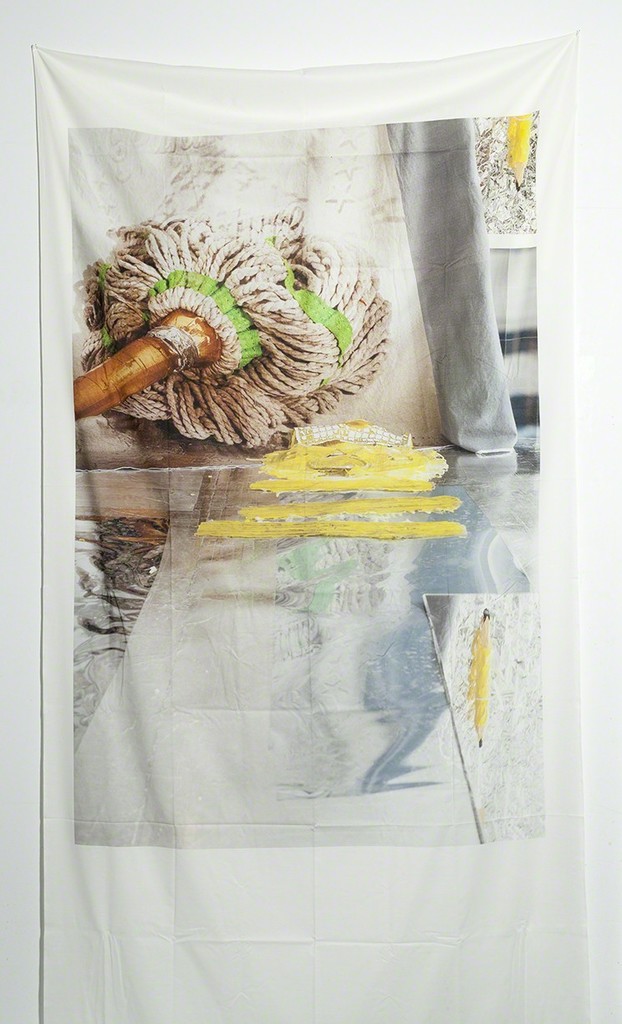 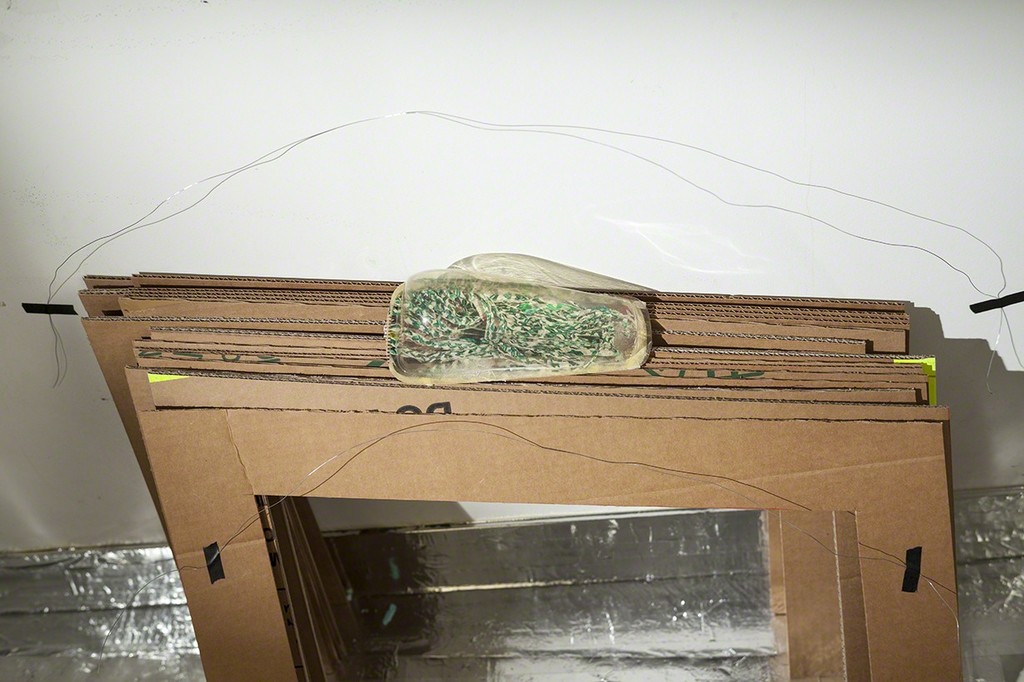 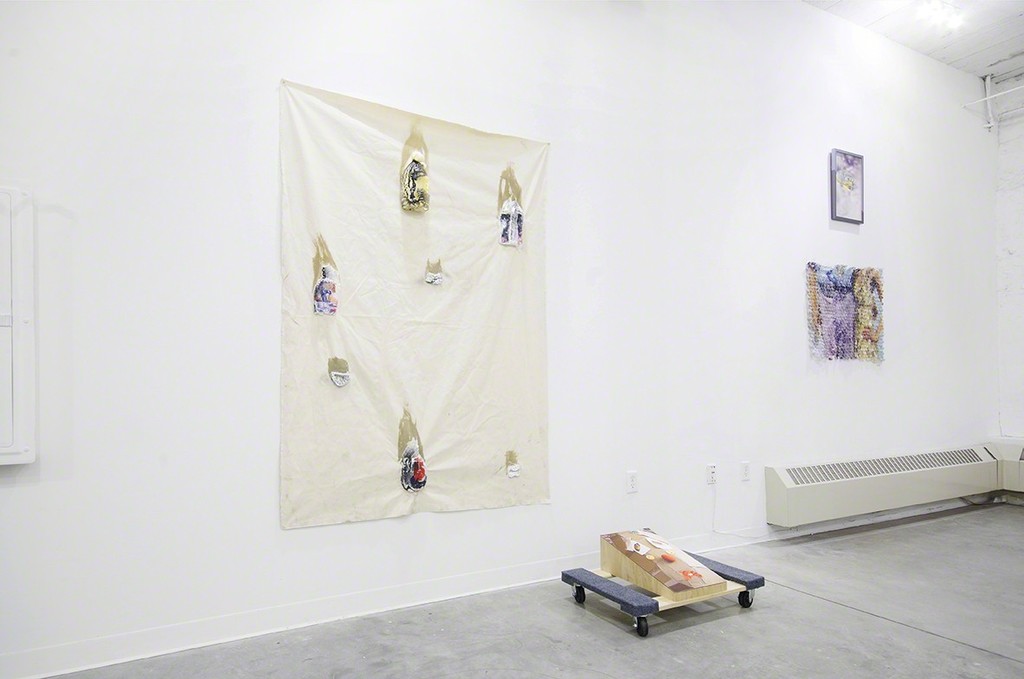 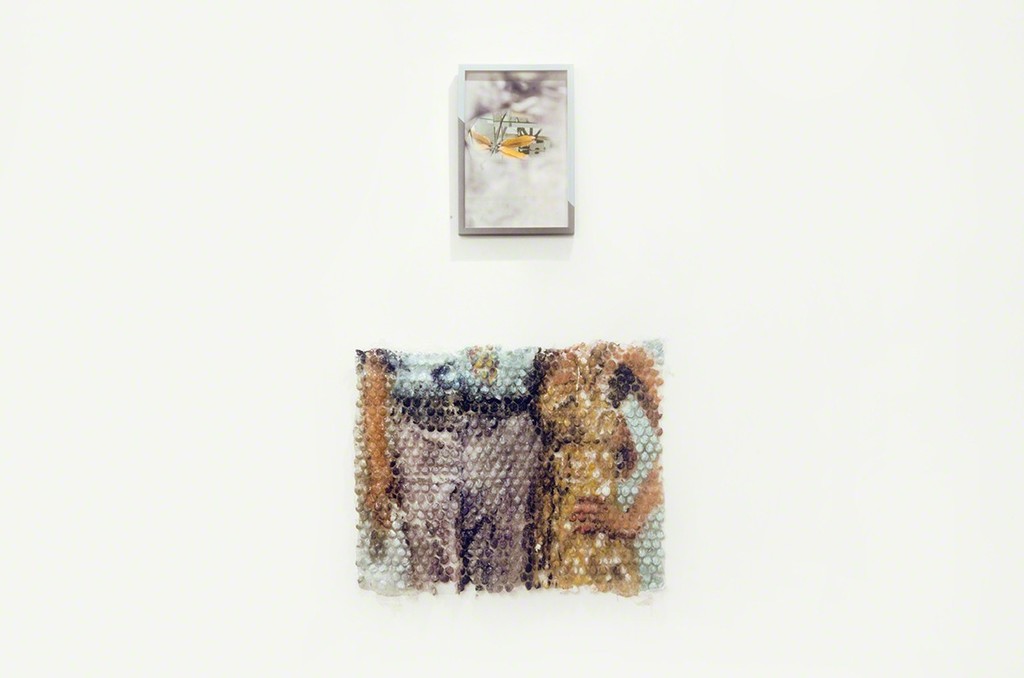 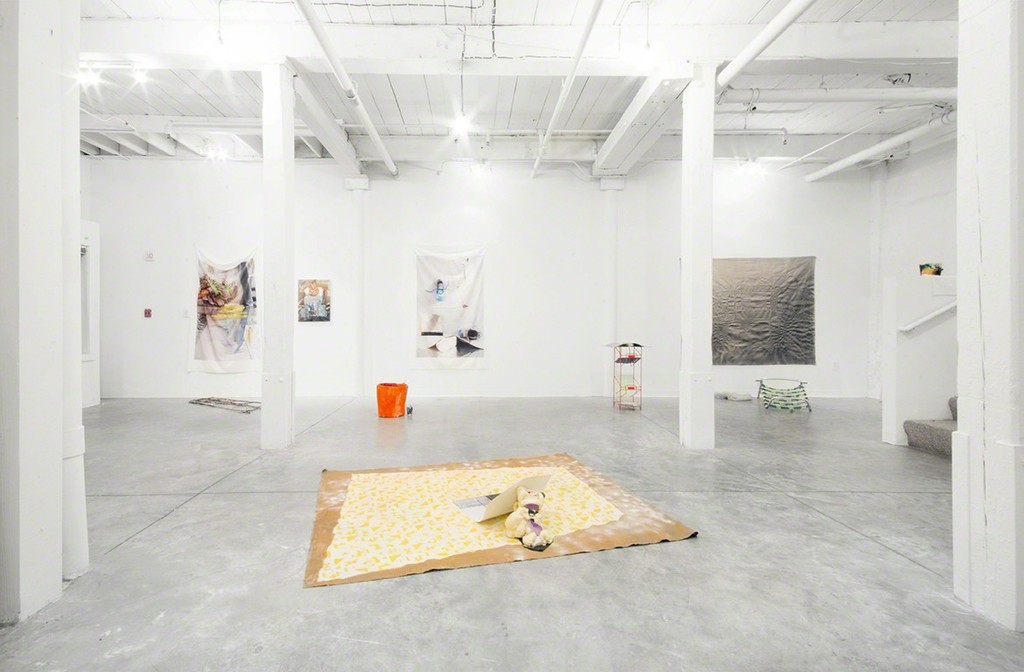 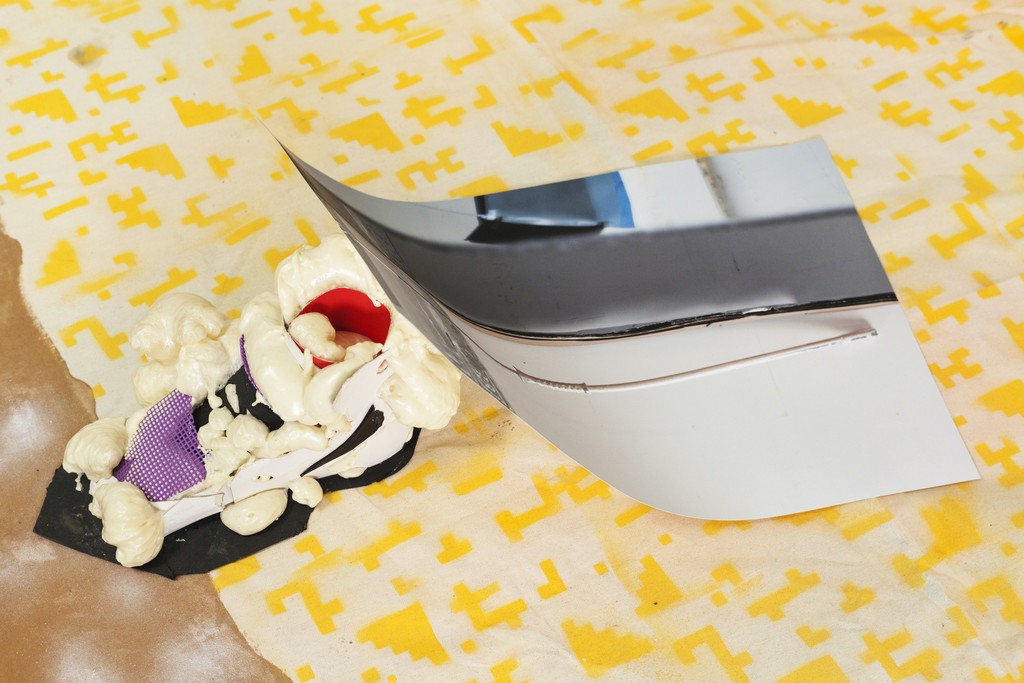 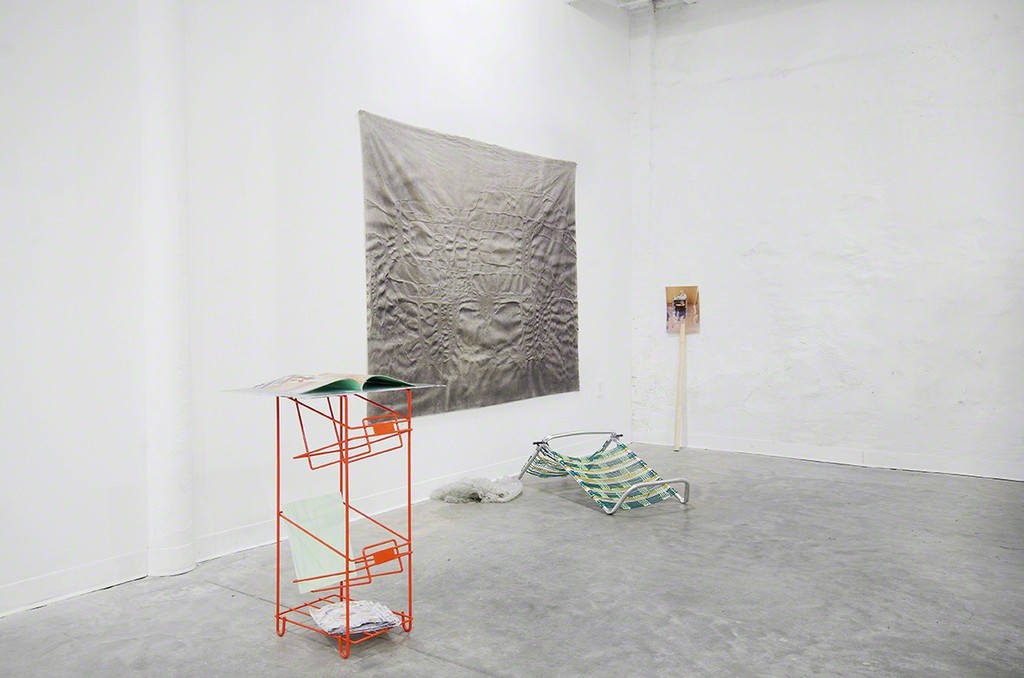 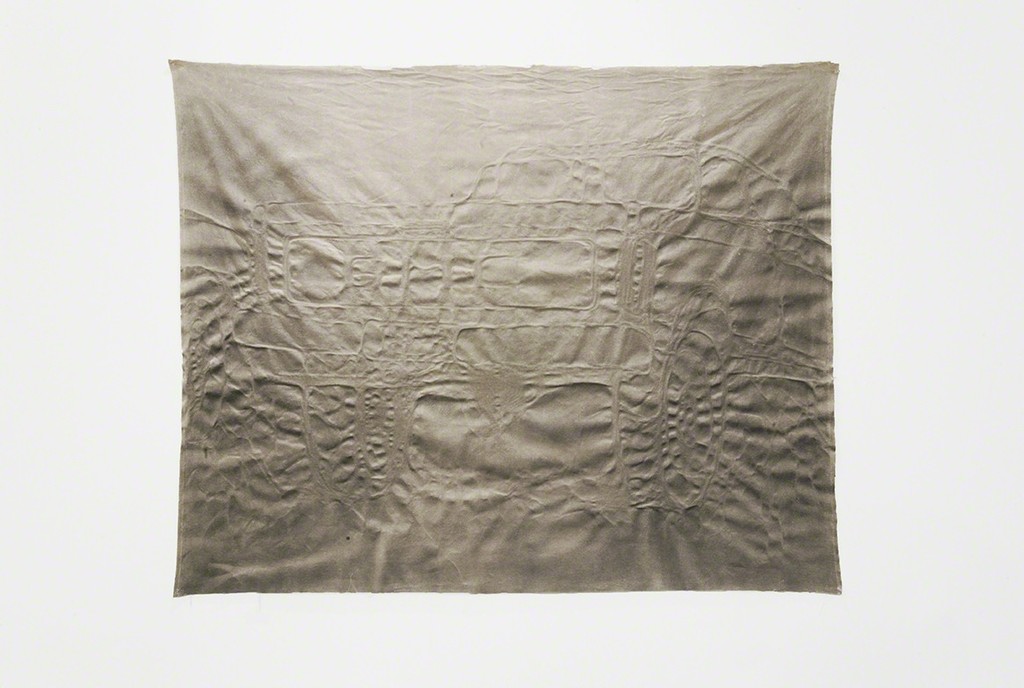 In Hive and Double, Aldrich and Weissberger present a collaborative body of work about the installation or exhibition of large work that blurs the lines between production and product. Touching on the tension between the possibilities of the studio and the singularity of the installed work, their output is about artistic production and labor in post-industrial studios and DIY exhibition spaces . In addition to the physical labor involved in dealing with substances, there is a consideration of preserving space for mystery, the unexpected, and the phenomenological.

"The work comes together through Skype chats, emails, individual material investigations, and the final in-person negotiation of the works in relation to each other and in space. In this way, our work explores the nature of collaboration and authorship, and challenges the assumed autonomy of the physical art object by allowing it to be borrowed for different configurations, to live in multiple contexts.

We are curious about perception and reality. Together our work forms structures within which the actual (real) thing, abstraction, pictorial space and physical space freely circulate and mingle. Material and substance are mutable. Idea and matter, belief and doubt, are framed in terms of a fluid, multidirectional exchange. We make (or alter) all the objects in the installations, and even the flattest parts (photograph and canvas) are called out as physical objects. The most obviously physical, the so-called real things (hand-made chair or shoe for example) also hover at the edge of image.

Ultimately mysterious, our work harkens back to a time when the in-situ nature of painting and sculpture put them in close proximity to the actual objects of church and home, and architectural features and physical object guide the transition from the actual to the implied space, and encompasses conversations of metamorphosis and transubstantiation, belief and the nature of reality." // Aldrich + Weissberger

Eleanor Aldrich was born in Springerville, Arizona. A participant at the Skowhegan School of Painting and Sculpture in Maine, she also holds an MFA in Painting & Drawing from the University of Tennessee, Knoxville, where she currently lives. She earned her BFA in Painting & Drawing through the Academie Minerva (Groningen, the Netherlands) and Northern Arizona University, Flagstaff. She was a participant in the Drawing Center’s firstOpen Sessions.

Eleanor has had solo shows in Boston, Knoxville, and Flagstaff, AZ. Her work has been shown at Saltworks Gallery (Atlanta, GA), the Drawing Center (New York, NY), GRIN (Providence, RI) and Ortega y Gasset (New York, NY). Her work was chosen for 1708 Gallery’s ‘FEED 2013’ (Richmond, VA). She has been awarded an Endowment for the Arts through the Whiteman Foundation, and the Herman E. Spivey Fellowship. Her work has been included in New American Paintings and on Artforum.com.

Barbara Weissberger’s work has been shown at such venues as the Drawing Center, PS1/MoMA, DUMBO Art Center, and White Columns in New York; GRIDSPACE Brooklyn; Hallwalls, Buffalo, New York; in Pittsburgh at The Mattress Factory, Pittsburgh Center for the Arts, and Artist Image Resource; Artspace New Haven in New Haven, Connecticut; the Holter Museum (solo, catalogue) in Helena, Montana and ADA Gallery and the Harnett Museum of Art, University of Richmond in Richmond, Virginia. She is a participant in the inaugural Open Sessions at The Drawing Center. Grants and fellowships include a Guggenheim Fellowship, residencies at The Camargo Foundation (France), the Hambidge Center (NEA DIstinguished Fellow 2013), Oberpfälzer Künstlerhaus (Germany), the MacDowell Colony, Yaddo, the Ucross Foundation, VCCA, and the Montana Artists Refuge. She divides her time between Pittsburgh and New York. Play is central to her process; images grow out of improvisation and the pleasure of working with materials. The writer Sherrie Flick described the idiosyncratic mix of elements in her work as “stacked and wrapped -- harmoniously, improbably, united in their disparity.”