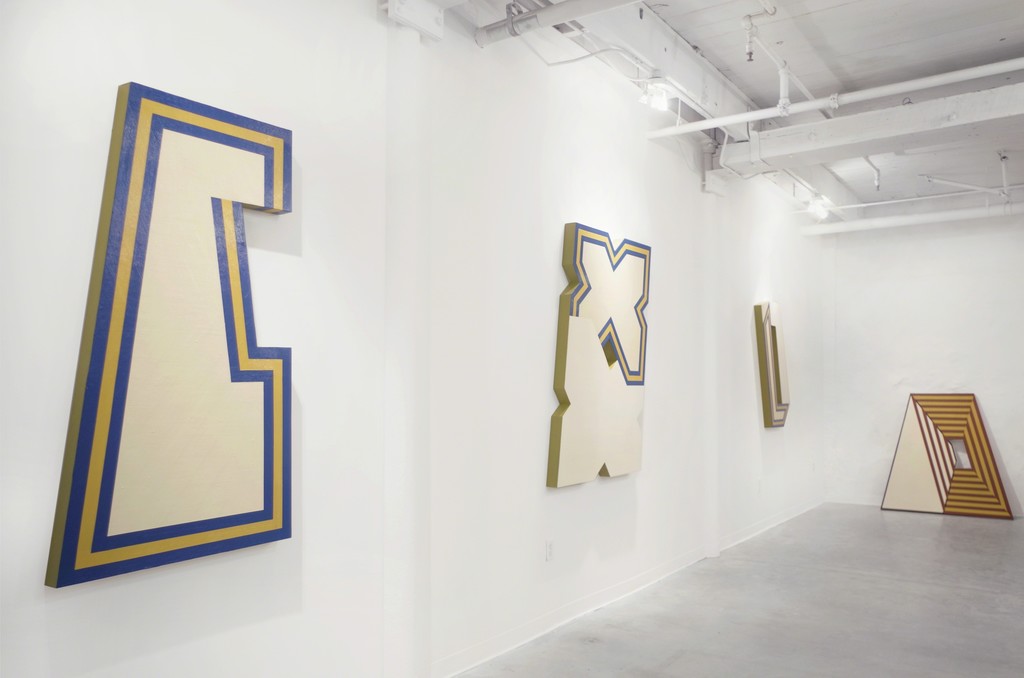 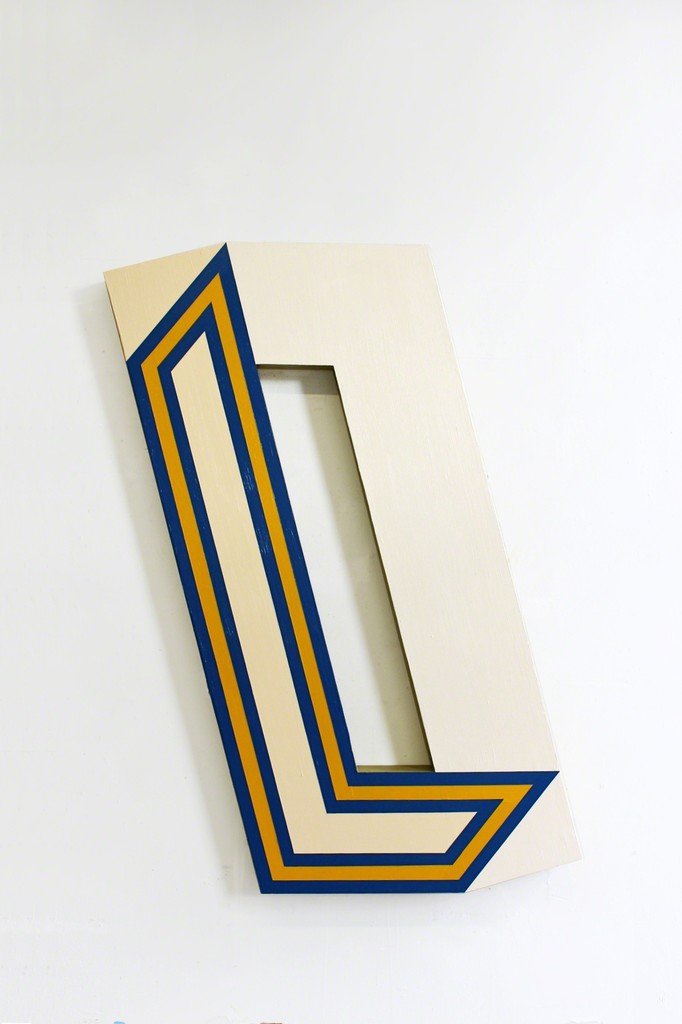 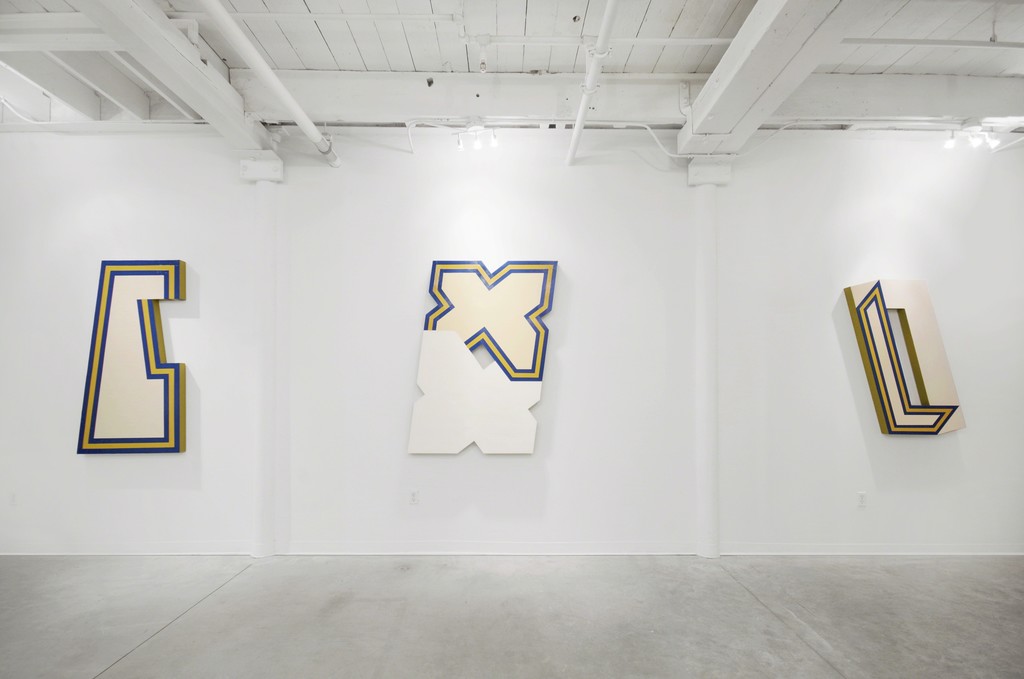 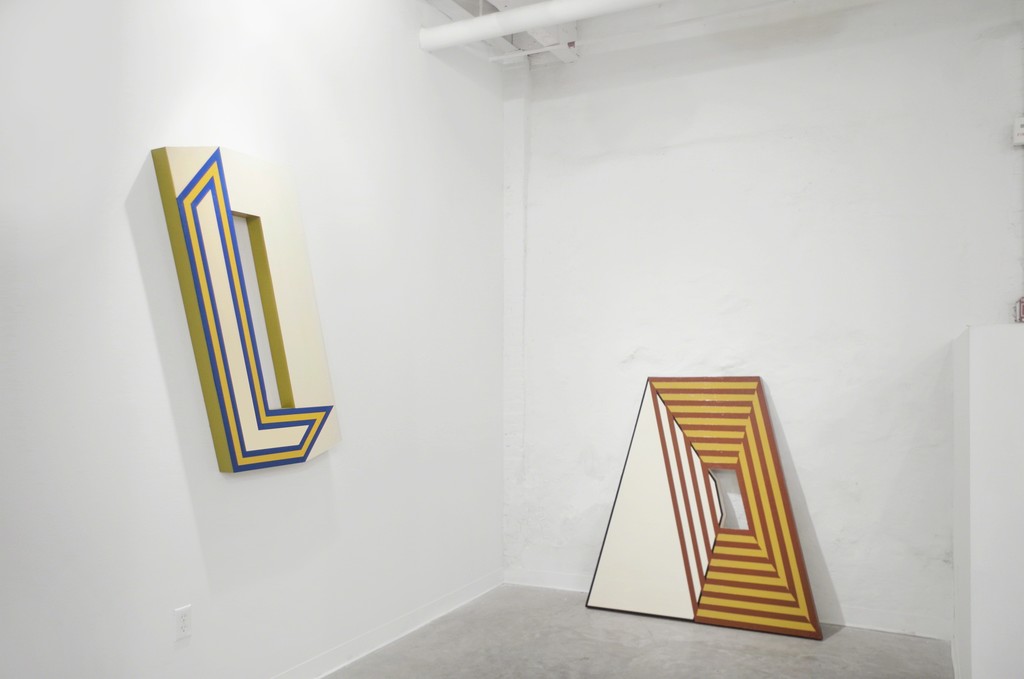 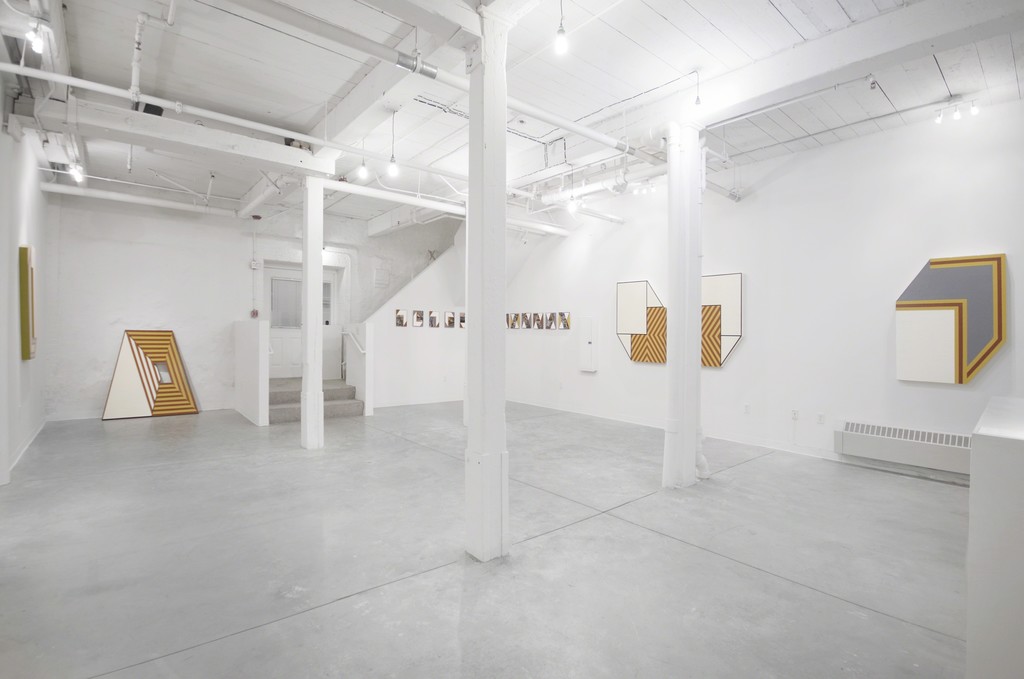 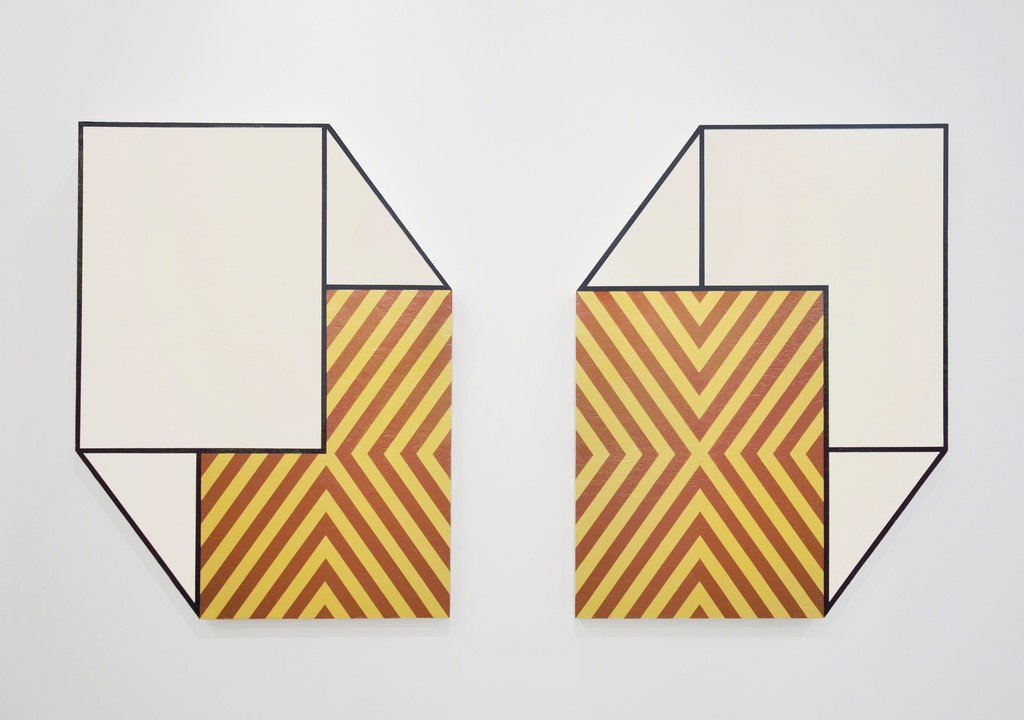 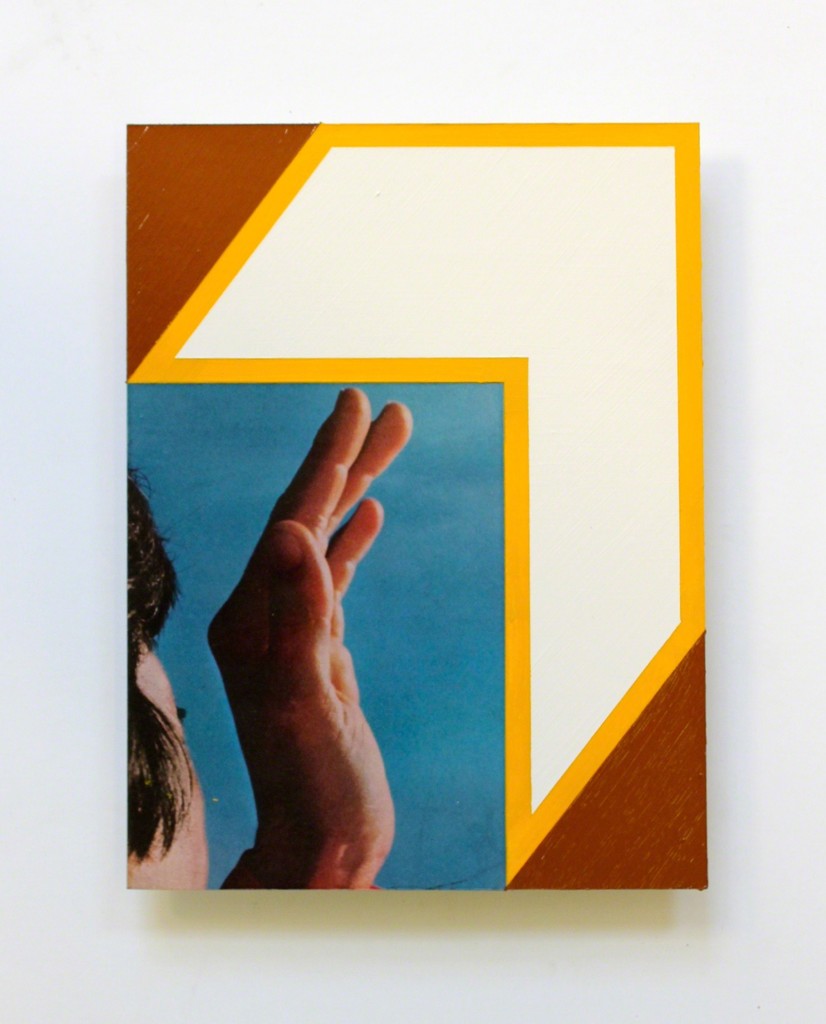 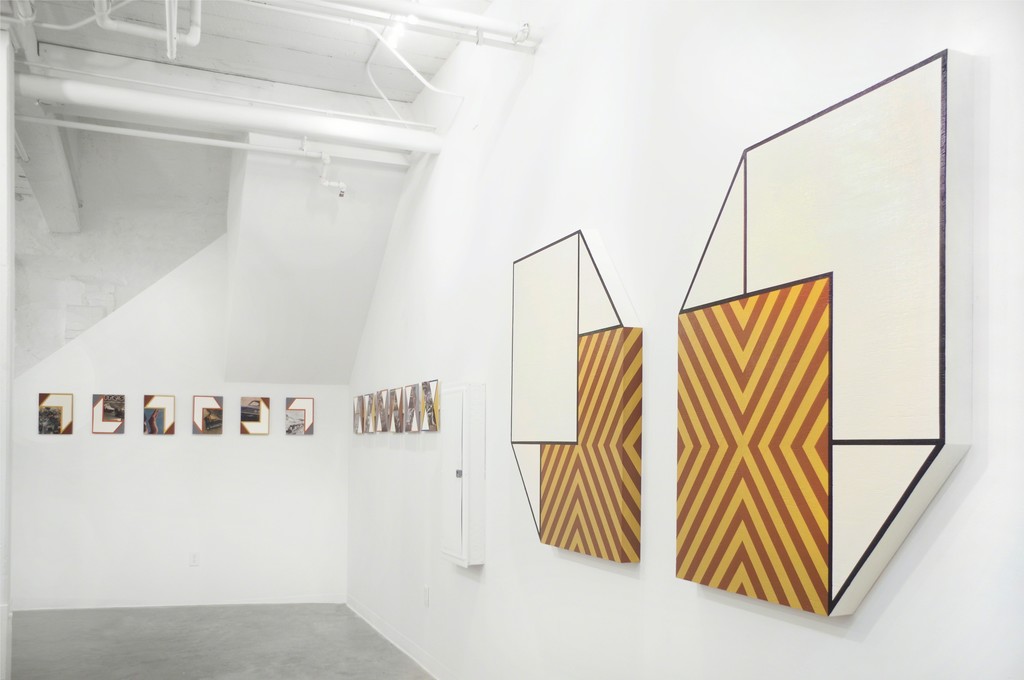 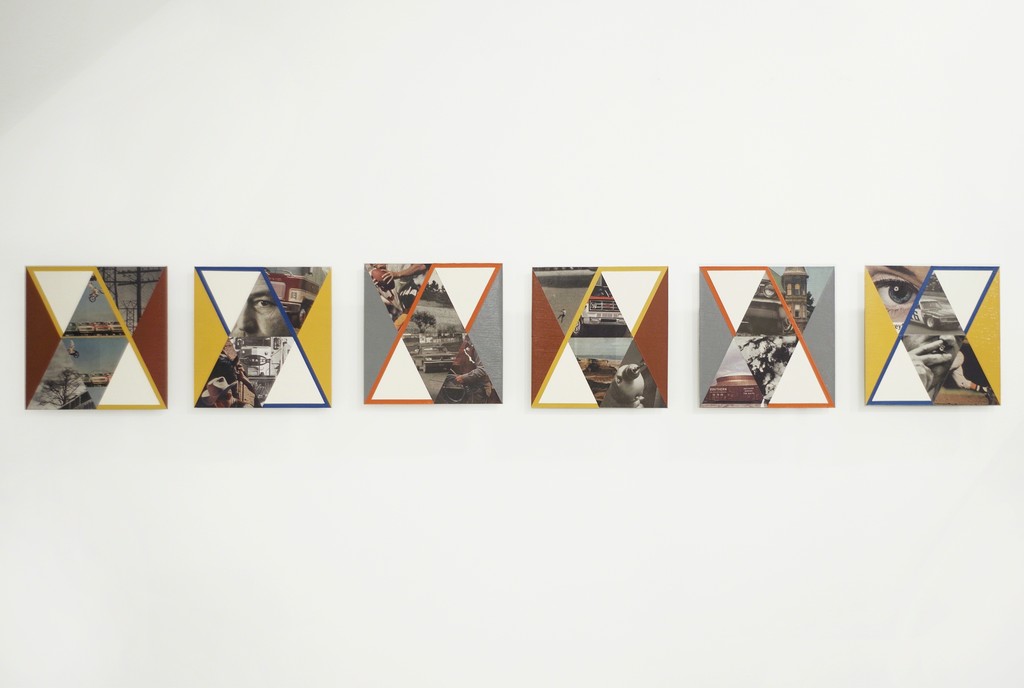 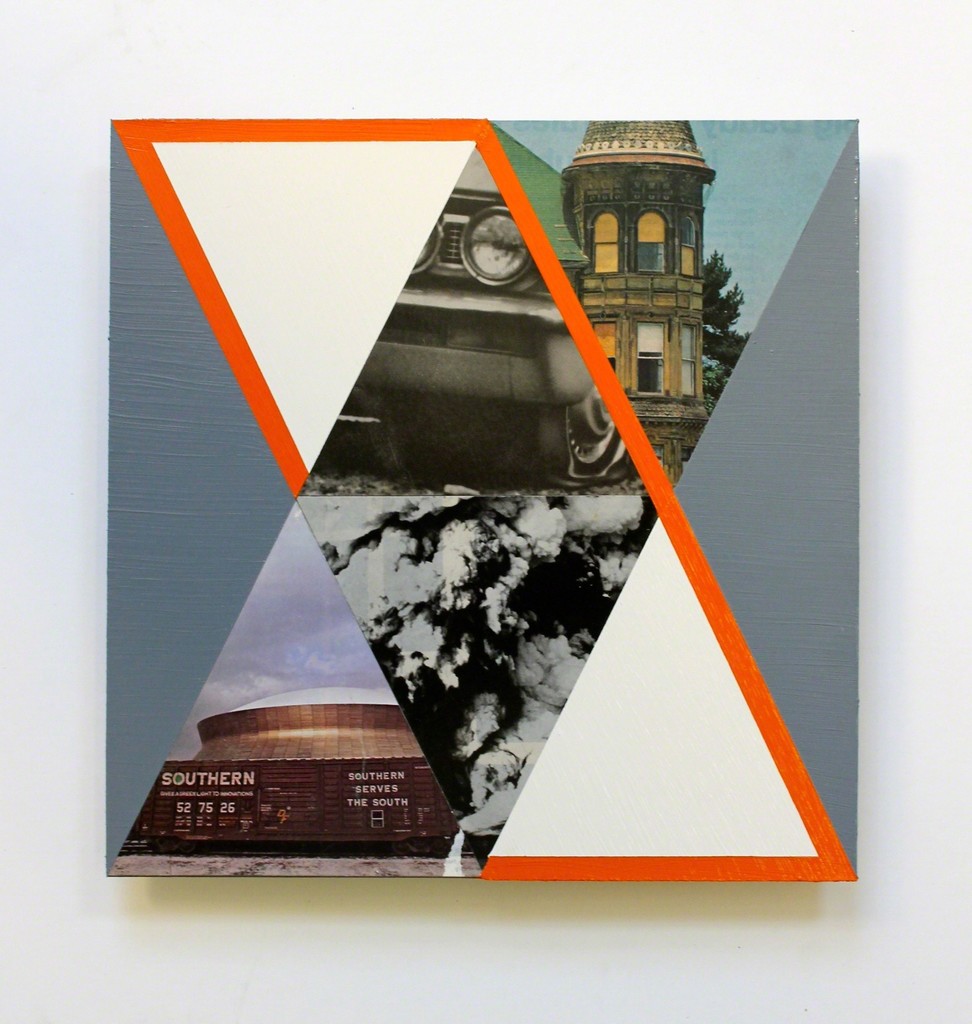 In his newest exhibition, Paintings from the 1970's, Matthew King presents a range of shaped-panels heavily masked with weighted geometrics and found iconic imagery. Stemming from a structured internal system, the artist paints dizzying patterns in high-contrast color palettes. Following post-painterly abstraction without fully rejecting expression, King's mark-making, layer-based textures, and utilization of found image allude to the labor of both the artist and his predecessors.

Referencing the minimalist powerhouses of art history with an aesthetic blend of Donald Judd and Frank Stella in his larger paintings-cum-sculptures, King also nods to the collage artists of the era by incorporating appropriated images of American perma-nostalgia; Goodyear, Evil Knievel, and the Great American Road Trip in sequenced smaller works. These pieces, mounted on aluminum panel, incorporate a pop-culture angle reminiscent of the painterly collages of Ray Johnson or Robert Rauschenberg. Painting's from the 1970's alludes to contemporary culture's fetishization of nostalgic American aesthetics, much of which stems from imagery and the experience of that era.

The artist carefully selects each magazine page and purposefully strips the "eureka" moment by cleverly cropping the images into an often mundane alternate view. The magazine clippings are engulfed in bold or vibrant color fields, shapes, stripes, and forms. Popping off the common compliment of black or white, a sense of dated youthfulness is introduced through the simplified symbolism in saturated Kodachrome-esque colors, defining the collective visual memory of the time.

Starting from a basic square, or a triangle, and most often a set of intersecting lines, King offers the viewer a variety of complex perspectives through a comprehensible approach to mark-making. Lakes of Pontchartrain is a life-sized painting constructed with wood panel completely veneered by thick layers of acrylic paint and lacquer. The formed cuts of the innermost and outermost edges combine with the painted surface to appear as two skewed crosses stacked and grooved like beta-age Tetris blocks.

With fully covered surfaces, this new series seeks to eradicate the raw materiality of his previous collection, forcing the artist to develop a new process for his vibrant panels. Completed over the summer of 2015 and steeped in art history , the work in Paintings from the 1970's is both present and past.

An emerging artist based in Boston, Matthew King confronts the aesthetic and thematic boundaries developed by the Minimalists during the 1960s and 1970s. His works employ techniques specific to hard-edge painting and photo collage, taking the form of three-dimensional objects that defy easy categorization. King earned a BFA from the Massachusetts College of Art and Design in 2010 and was the recipient of the Edward Movitz painting award. His work has been included in solo and group exhibitions throughout the United States including Boston, New York, Providence, and Austin TX.