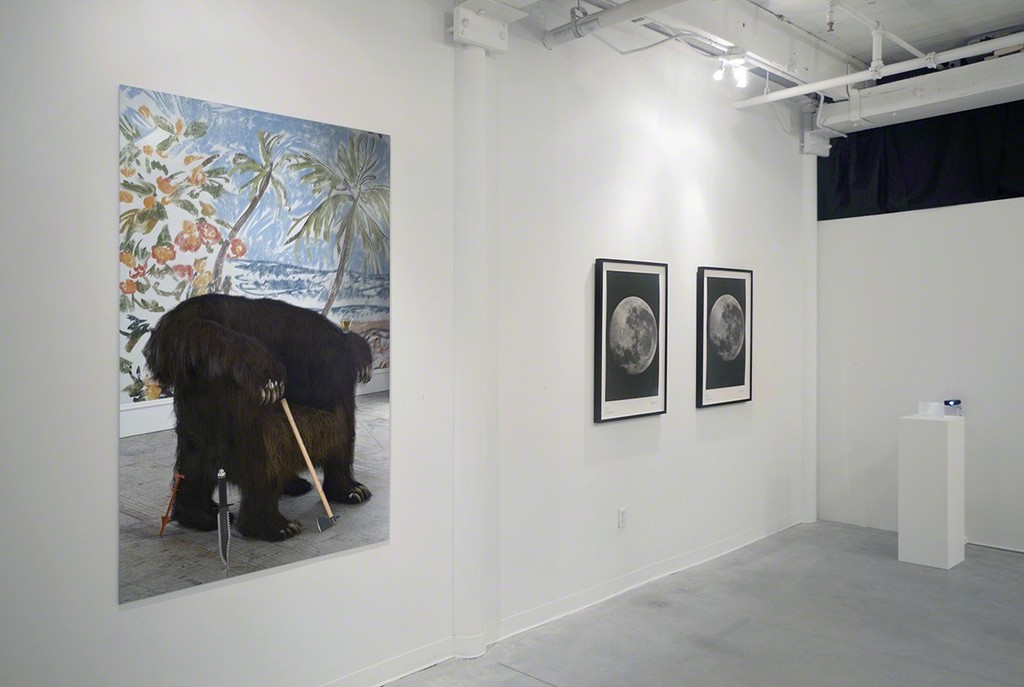 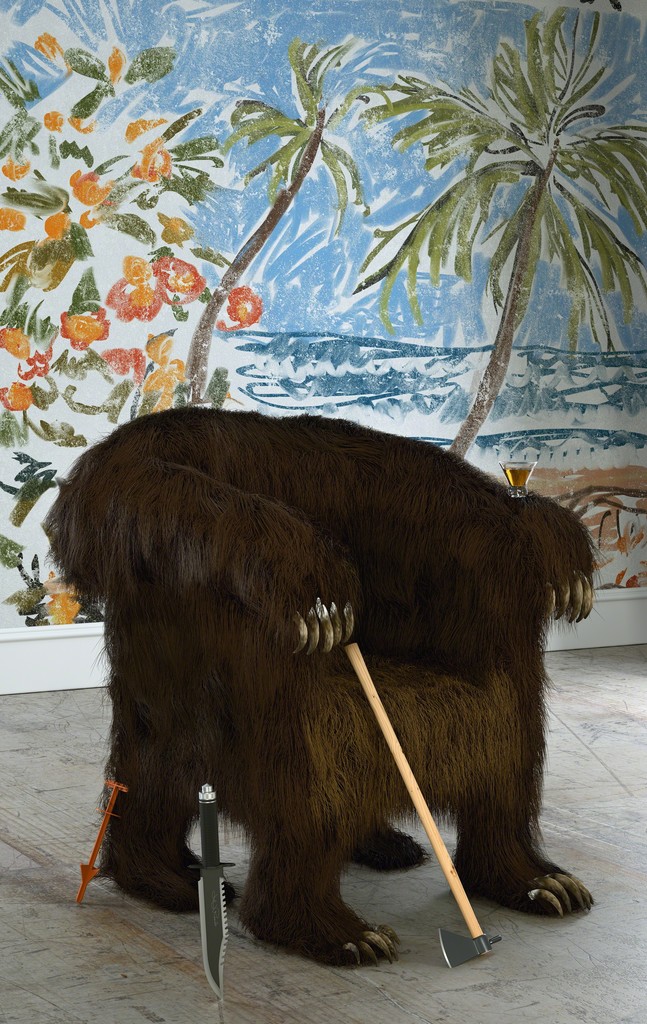 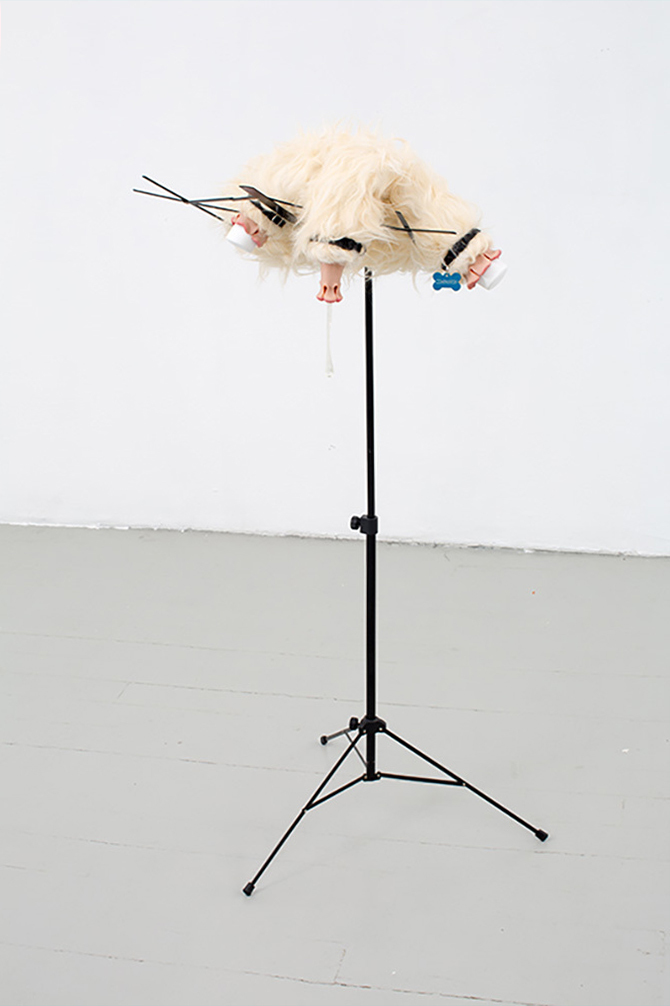 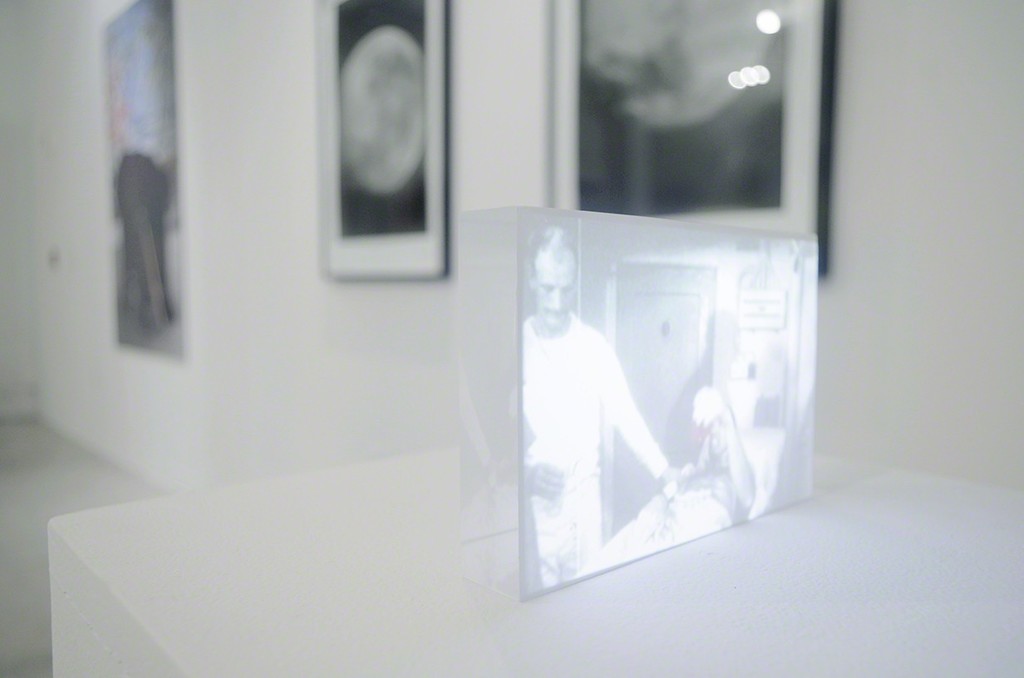 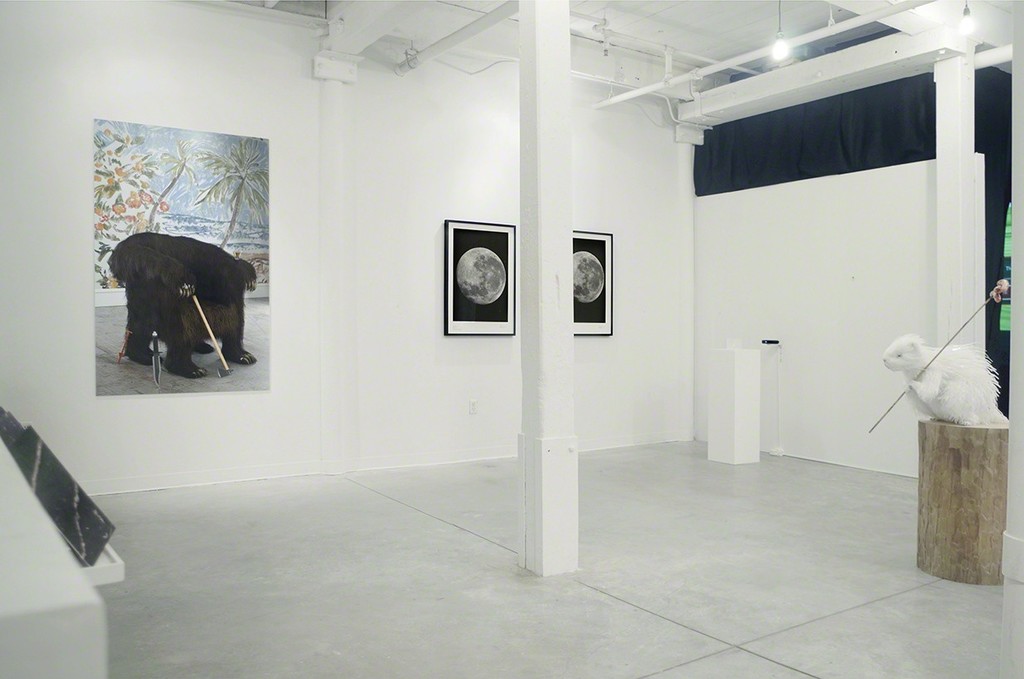 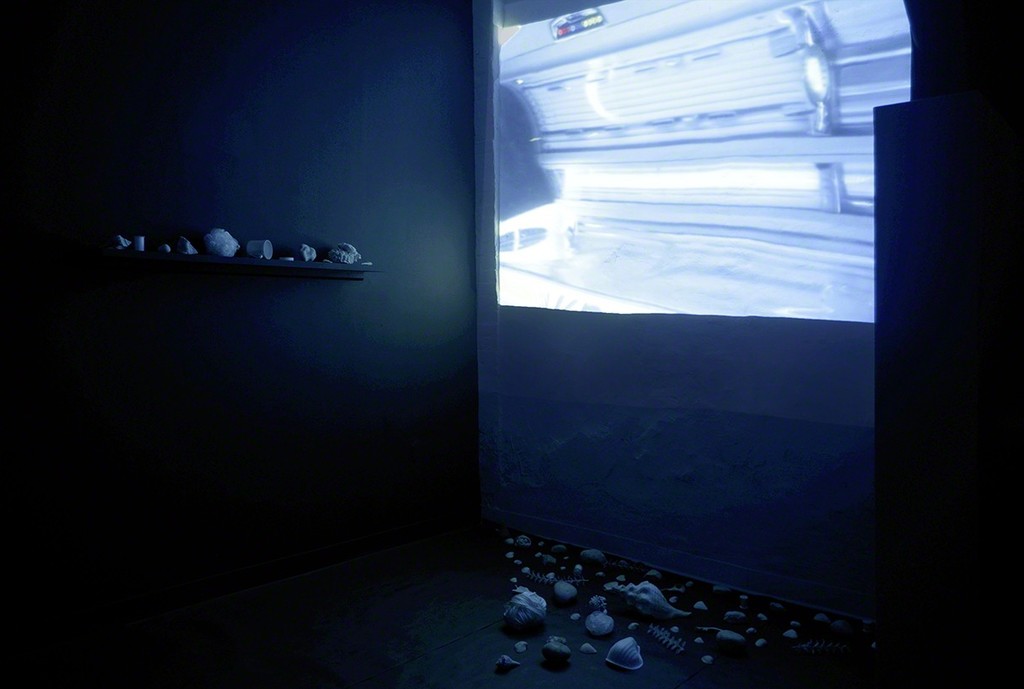 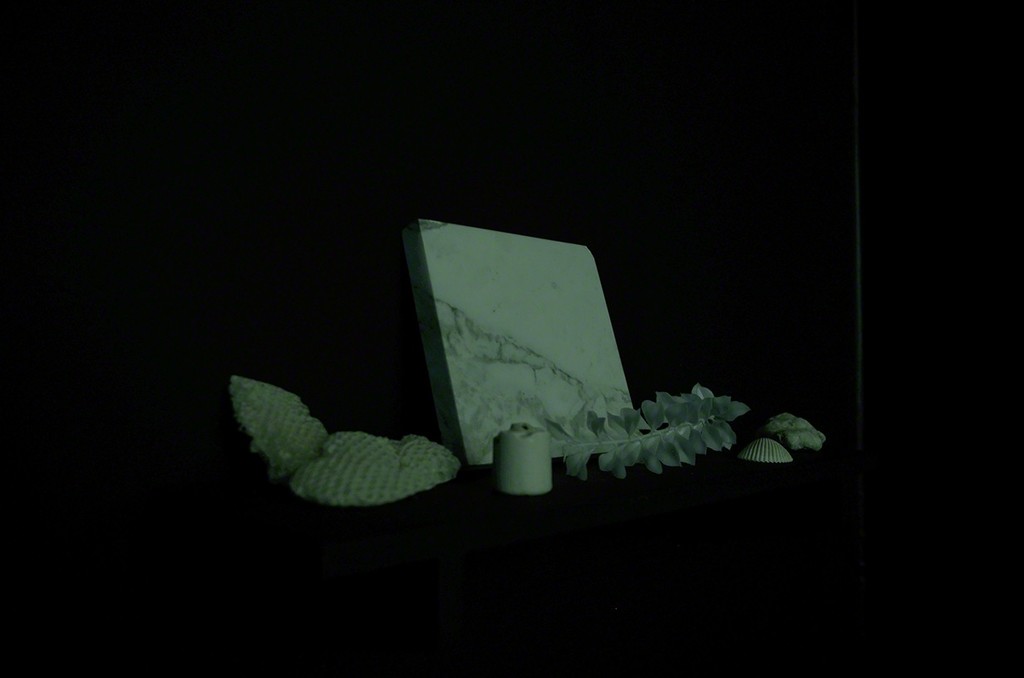 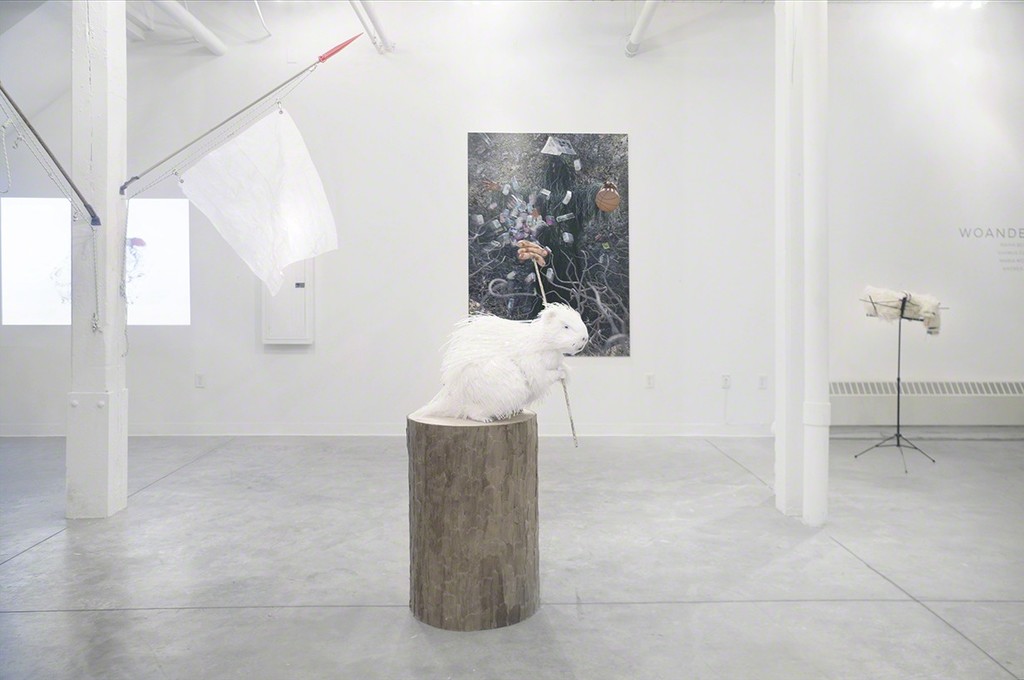 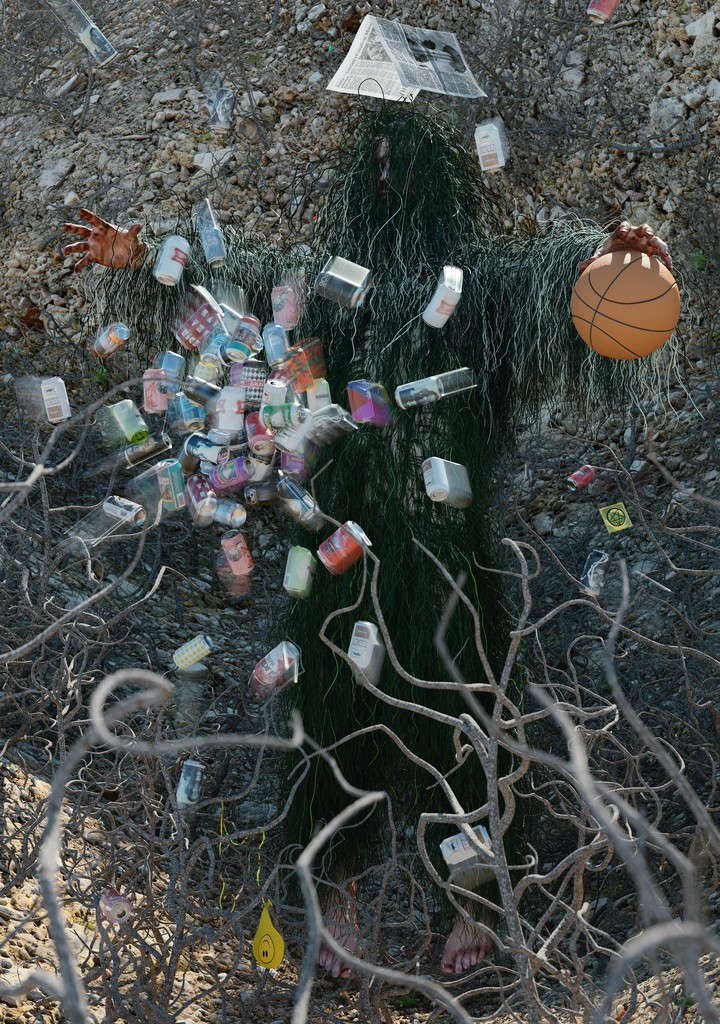 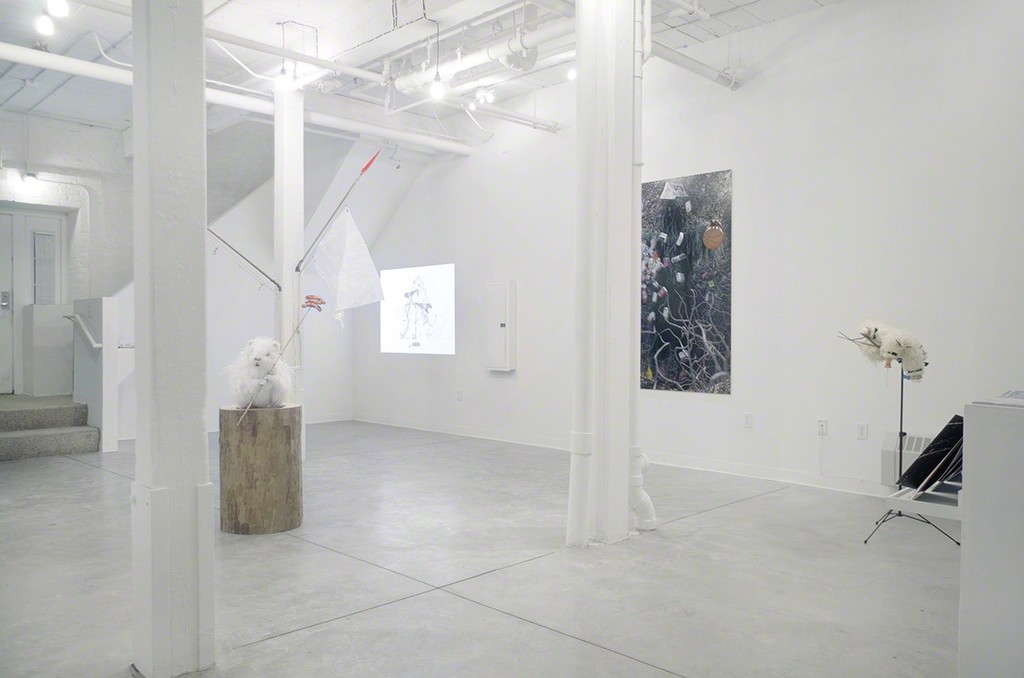 Woander confronts our heavily mediated relationship with nature. Works by Raina Belleau, Andrea Wolf, Shamus Clisset, and Maria Molteni approach the great outdoors by calling a keen attention to common cliches, taboos, disruptions, past-times, and memories associated with our organic surroundings. By configuring selections of faux materials, documentations, and objects, the artists in Woander have produced works that mirror a traditional view of flora and fauna, while also critiquing our archetypal attitudes encompassing these subjects. House plants, home movies, astroturf, faux furs, recyclables, and digital screens are arranged as a sort of back-handed homage to our domestic actions in relation to our greater surroundings.

Using an astute combination of man-made materials and anthropomorphism in her character-driven installations, Raina Belleau is constantly alluding to the human element and its effect on the natural world. Belleau presents simple environmental reminders by orchestrating aesthetically elaborate displays through an exquisite selection of material and composition. Belleau's video installation, Brood, depicts the artist dressed in a camouflage costume complete with whooping crane puppets on both hands. Based on outfits worn by conservationist biologists in an effort to avoid avian/human bonding, the crane puppets pull raspberries from a bowl to feed the disguised mouth of the artist. Her sculptures and installations embody her awkward feeling towards nature; an ache to connect while remaining distanced and separate.

Shamus Clisset's compositions question the impossible by using known imagery and objects in imagined space. Rendered natural materials and textures are frozen uncomfortably at disconcerting angles, defying traditional gravity and adhering instead to Clisset's own set forces. Mr. Realistic (Keeping America Clean) is a life-sized raytraced-image c-print of a homeless Merlin-type meets seaweed cosplay, set in a murder scene of a Law & Order episode. Grizzly Chair focuses on a meticulously rendered, larger than life Bear-Skin chair taken from Seth Kinman's 1865 version. Brute-force hunting tools as well as common items associated with luxury sit on and around the chair in front of whimsically painted floral wallpaper. The piece is a marriage of sought-out enjoyment and revelry of the natural world with the urge for re-organization and control over it. Dizzying and responsive, the individual elements of these compositions come alive and mirror our complex relationships with those elements in our traditional lives.

A site-specific installation by Maria Molteni is a projection room slowly pulsing and transitioning through various color filters cued to a soundtrack of droning cicadas. Complimenting the immersive installation, sculptural and found objects catch the reflected light of a tanning bed projection behind a curtain or through a peephole. Molteni views this pulse, this drone, as a reference to environmental and biological cycles; "the electromagnetic (visible) spectrum, sunrise/setting, seasonal recreation, insect mating patterns" to name a few.

Andrea Wolf presents two prints of photographs of the moon alongside an intimate projection of found-astronaut-footage from 1963. Her installation evokes a sense of nostalgia while triggering a barrage of memories surrounding the sky, the stars, the heavens, and the moon. The work calls attention to the absence of personal experience and memory of the moon through it's presentation as ephemeral material, while also reminiscent of Mom and Pop's home movies or photo albums. She is considering memory as both a personal and collective experience; wonder that is transferred and exchanged from person to person.

Woander is a forced combination of the words Wonder and Wander, spawning from wanderlust as a yearned-for human experience with the universe. We were defining wonder as an opposite to wander, as the latter is a physical action and the former can be understood as procrastination in relation. Neither come to any tangible fruition, but both are integral to our experience and relationship to the outside world.

Raina Belleau
Raina Belleau is a Minnesota artist currently based in Providence, RI. She received her BFA from the Minneapolis College of Art and Design and her MFA from the Rhode Island School of Design. Raina is a 2012 recipient of the Minnesota Sate Arts Board Fellowship and a 2011 Minnesota Department of Natural Resources Adopt-a-River Artist.

Andrea Wolf
Andrea Wolf is a Brooklyn-based interdisciplinary artist from Chile. Her work consists of ongoing research on time, memory, and image. Wolf’s practice focuses in memory objects we produce (photos, home movies, postcards) and the relation between personal memory and cultural practices of remembering. Wolf creates video installations and video sculptures to tackle these matters, representing the tension between remembering and forgetting. Working with found footage - with anonymous stories - she leaves an open space to be filled by the meaning that each of us brings through our personal experiences.

Wolf holds MFAs in Documentary Filmmaking (Universidad Autónoma de Barcelona) and Digital Arts (Universidad Pompeu Fabra), and a MPA in Interactive Telecommunications (NYU). She was a resident of the AIM Program at the Bronx Museum in 2013 and is currently an artist in residency at the New York Media Center. Wolf has shown her work and given lectures and workshops internationally in venues like the Museum of Memory and Human Rights and the Contemporary Art Museum in Santiago Chile, Dumbo Arts Festival, White Box, The Paley Center for Media and Wave Hill in New York, MIT Media Lab in Boston, Digital Culture Center in Mexico City, VIZZI Festival in Kiev and Media Lab Madrid. Andrea is founder and director of REVERSE, a non-profit workspace and art gallery in Brooklyn.

Shamus Clisset
Shamus Clisset lives and works in Hell’s Kitchen, NY. FakeShamus is a sort of imaginary-friend character who lives and explores these alternate realities - a digital golem wreaking havoc on everything around him. He morphs from scene to scene, melding with objects of my own mental obsessions and personal history: the Lamborghini Countach that I drew compulsively as a kid; the nature and suburban landscapes of my upbringing in Colorado; Bazooka subwoofers that I lusted after even before I owned a car to put them in; the aesthetics of beer, guns and violence.

Maria Molteni
Maria Molteni is a Nashville-to-Boston-based multimedia artist, beekeeper, and educator. Having completed rigorous studies in drawing, painting and printmaking at Boston University her practice sprang from roots in observation and formalism.

Over time, it expanded to incorporate performance, research, and participation. In the spirit of early puppeteers, with roots in religion and radical politics, she attempts to extract or embellish psychic energy in urban and natural environments. Exploring iterations of sport, craft, feminism, spiritualism, animism, utopia, pop-culture, cryptozoology, and queerness, her work seeks to embody or expose unseen presences or predicaments, whether cosmic or practical. She enjoys problem solving via traditional methods of craft, employing original or absurdist tactics as applied aesthetic solutions.