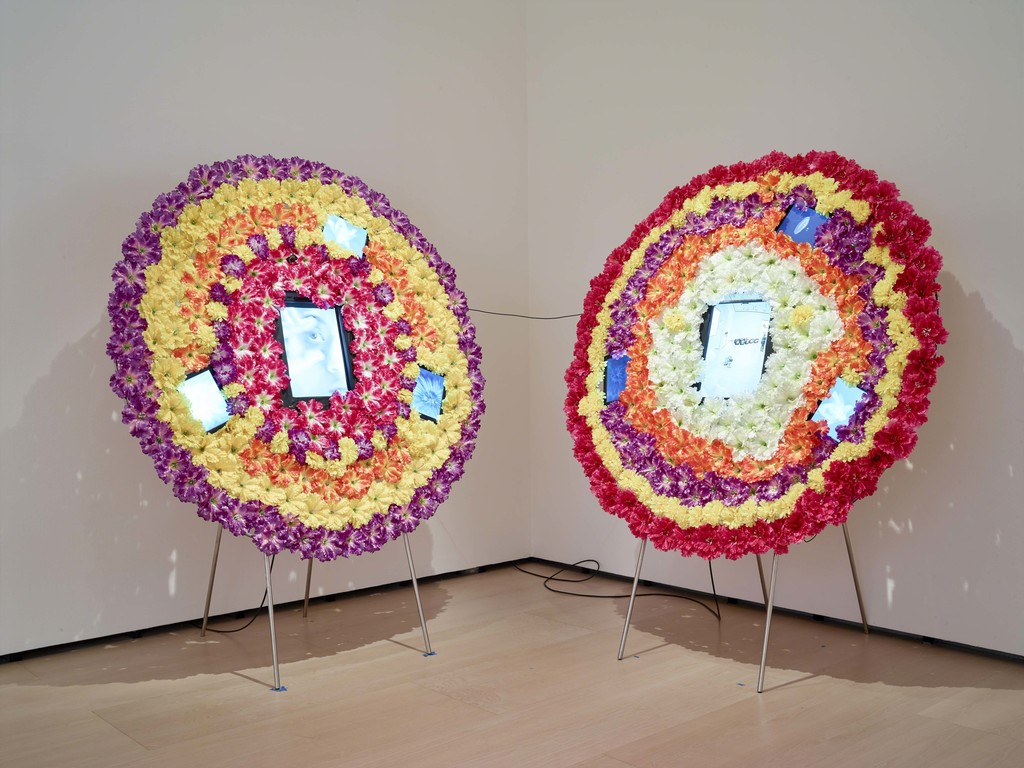 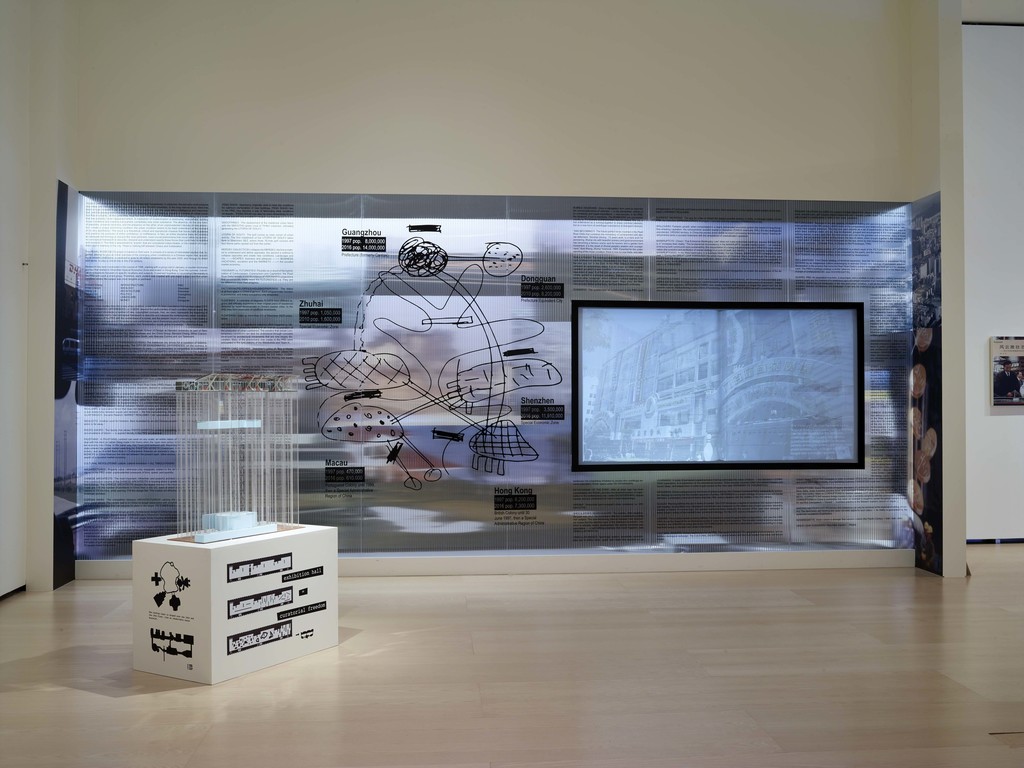 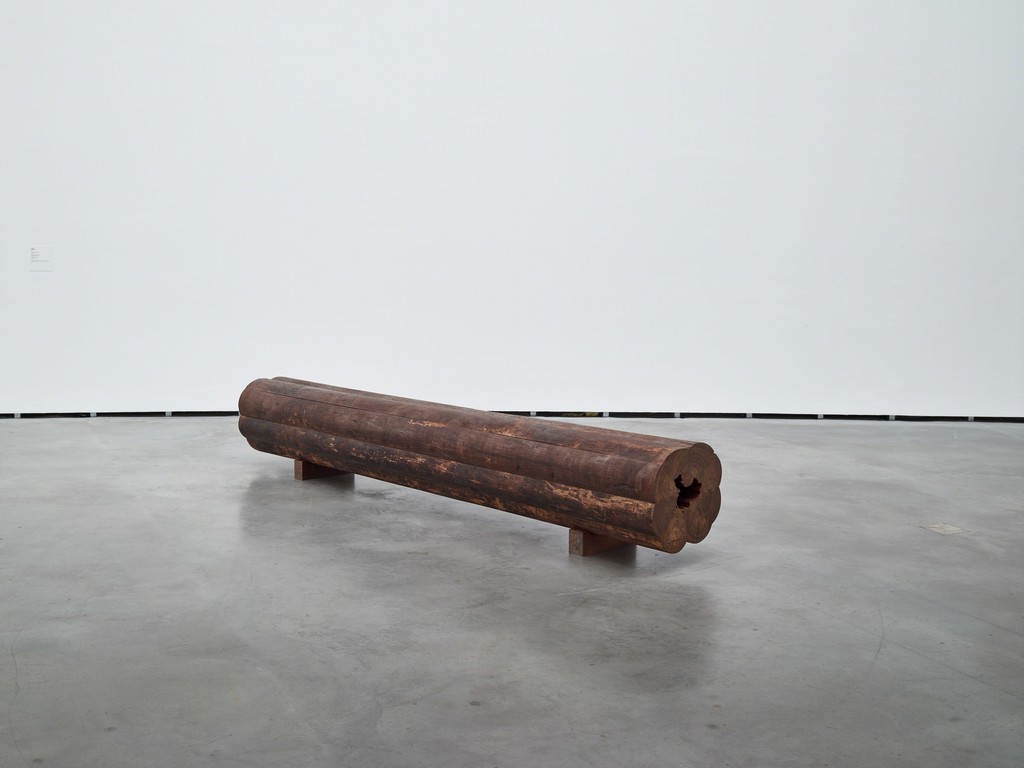 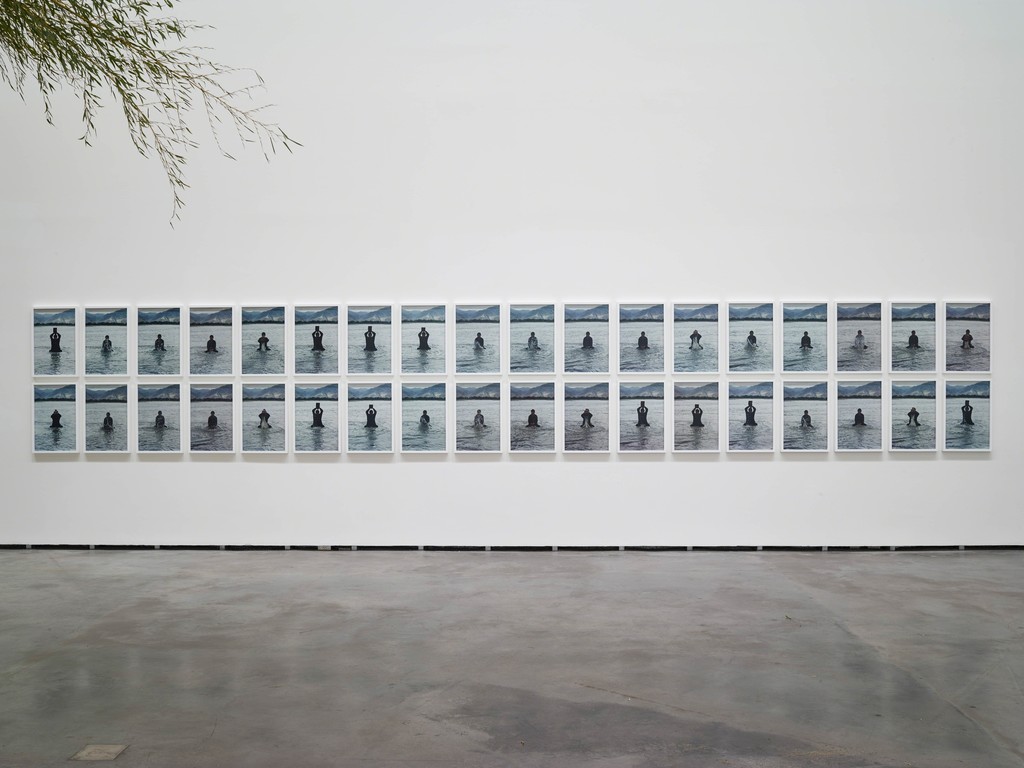 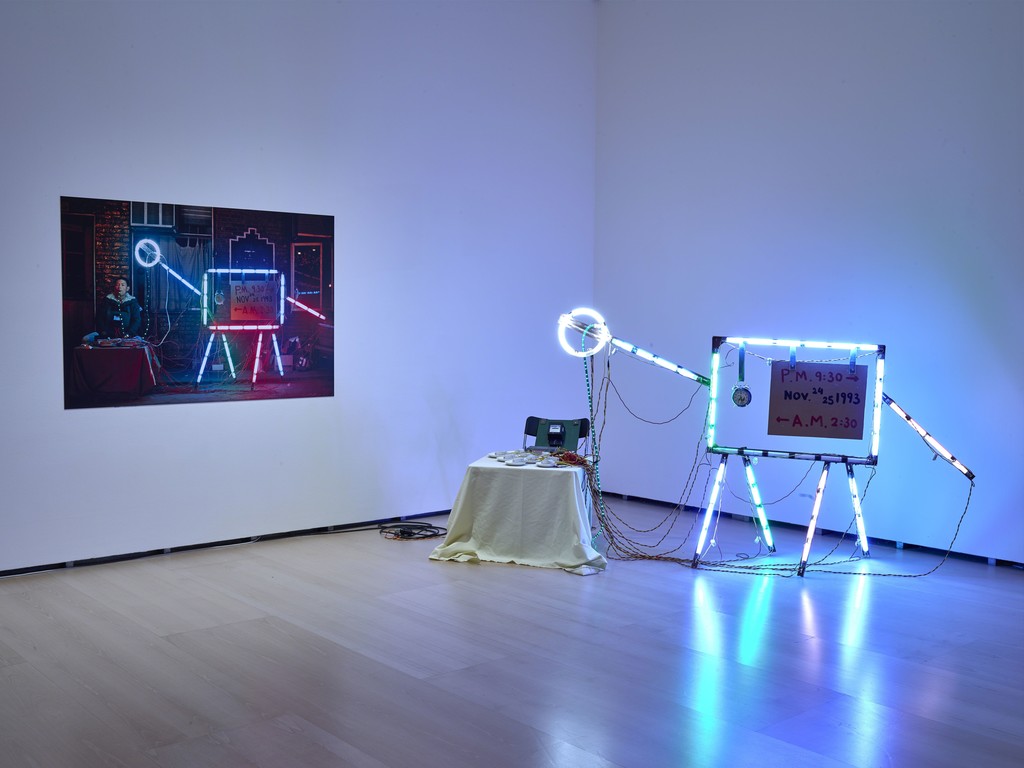 Art and China after 1989: Theater of the World

The Guggenheim Museum Bilbao presents Art and China after 1989: Theater of the World, the largest exhibition held to date on Chinese contemporary art during the most transformative period in the country’s recent history, from 1989, the year of the Tiananmen protests, to 2008, when the Olympic Games were held in Beijing. Organized by the Solomon R. Guggenheim Museum, the exhibition provides a fresh interpretive survey of Chinese experimental art in a context framed by the end of the Cold War, the spread of globalization, and the rise of China as a world power.

The show is divided into six thematic and chronological sections, and encompasses a variety of artistic practices, including performance, painting, photography, installation, and video art as well as socially-engaged projects. With a concentration on the conceptualist art practices of two generations of artists, this exhibition examines how Chinese artists have been both critical observers and agents of China’s emergence as a global presence and places their experiments firmly in a global art-historical context.

In the words of Alexandra Munroe, the lead curator of the show, “Art and China after 1989: Theater of the World revolves around key artists, groups, and movements active across China and internationally, whose provocations aim to forge reality free from ideology, to establish the individual apart from the collective, and to define contemporary Chinese experience in universal terms. This focused examination invites us to consider our own recent history through the lens of some of the most thoughtful contemporary artists from China.”

The exhibition, which occupies the whole second floor of the Guggenheim Museum Bilbao, highlights the conceptual and artistic achievements of some 60 artists and collectives and features over 120 artworks on loan from private and public collections across Asia, Europe, the Middle East, and the United States, as well as from the Guggenheim’s collection.

Throughout the sections listed below, the exhibition ambitiously surveys the culture of artistic experimentation during a time characterized by the onset of globalization and eventual skepticism about state-capitalism and its promised prosperity.

The introductory gallery features two major works central to the exhibition narrative. The first is the two-part installation, Theater of the World (1993) and The Bridge (1995) by Huang Yong Ping. Drawing on Daoist cosmology and magic, Michel Foucault’s theories on modernism as prison, and debates on the ills of globalization, Huang’s “panopticon” is a living metaphor of the modern nature of chaos. Also on view is a six-panel ink painting by Qiu Zhijie titled, Map of Theater of the World (2017). Commissioned by the Guggenheim Museum, this massive map based on the artist’s research of the show illustrates the political and cultural histories of China and the world spanning the 1980s to now, including many of the key works of art featured in the show.

This section focuses on two events that marked 1989 as a watershed date in the history of contemporary China. The exhibition China/Avant-Garde, promoted with the traffic sign symbol No U-Turn, opened in Beijing at the National Art Gallery in February 1989. This monumental exhibition canonized the conceptual and experimental art that had flourished throughout the 1980s in the first decade of Communist Party statesman Deng Xiaoping’s liberal Open and Reform Era. Works exhibited in that show are on view, including Gu Dexin’s Plastics – 287 (1983-1985), hundreds of found everyday plastic objects blowtorched into grotesque, abstract forms; this work was also shown at that year’s landmark exhibition of global contemporary art at the Pompidou Centre, Magiciens de la Terre. On June 4, 1989, the army cleared demonstrators from Tiananmen Square, marking the end of a democracy movement to which advanced art had been closely allied. Wang Xingwei’s painting, New Beijing (2001), is based on a famous photograph of civilians rushing two young protesters to the hospital on a tricycle flatbed. In Wang’s version, the students are replaced with bleeding emperor penguins.

The events of 1989 and their aftermath transformed China. Artists moved towards analytic, conceptual practices to express a critical consciousness doubtful of authority systems, including bureaucracy, ideology, and language itself. Works like Zhang Peili’s video, Water (1991) and Wu Shanzhuan’s absurdist diary, Today No Water (1986-96) evinced mechanistic processes, documentary sensibilities, and minimalist means that slyly mimicked the systems the artists sought to subvert.

The spring of 1992—when Deng Xiaoping made his “Southern Tour” to promote China’s economic liberalization—ushered in a new era of free-market capitalism and neoliberalism. Earlier dreams of democratic transition succumbed to a new kind of authoritarianism as urbanization and globalization occurred at an unprecedented scale and speed, turning China into “the world’s factory.” Realist painters exposed the tensions between individual lives and such massive change in works like Yu Hong’s Witness to Growth, 1992 (2001), while the collective Big Tail Elephant Working Group (active 1990-98) staged satiric interventions in the streets and construction sites of the rapidly growing city of Guangzhou. In Safely Maneuvering across Linhe Road (1995), performance artist Lin Yilin stacks and unstacks cinderblock walls in the middle of the city’s busiest thoroughfares, while onlookers barely notice amid all the construction commotion.

In the mid-1990s, conceptual art practices and postmodern criticality inspired some of the most important experiments in performance, photography and video art in China. Ai Weiwei, recently returned from a decade in New York, staged a performance Dropping a Han Dynasty Urn (1993); his nonchalant destruction of an ancient artifact in front of a camera critiques cultural value systems. Works displayed in historical radical exhibitions of the late 1990s are featured in this section, like Zhang Peili’s video installation Uncertain Pleasure II (1996), featuring 12 monitors each showing a cropped, close-up frame of hands scratching bare flesh. Like their counterpart phenomenon, the Young British Artists, these artists concentrated on the most basic level of physical and psychological experience, or, sensation, to bring art back into the realm of visceral reality.

Running alongside the history of contemporary art inside China is a parallel history of Chinese artists working and exhibiting abroad. In the 1990s and early 2000s, international biennials and exhibitions of global contemporary art staged sweeping narratives engaged with topical themes such as identity, diaspora, and globalization. The Paris-based artist Chen Zhen created Precipitous Parturition (2000), a twenty-meter long writhing dragon made of bicycle inner tubes suspended from the ceiling in the literal throes of globalization; its belly is covered with tiny black plastic cars, as if China as a nation of bicyclists is giving birth to its own extinction as cars take over. Cai Guo-Qiang’s gunpowder drawing Ascending Dragon: Project for Extraterrestrials No. 2 (1989) is a diagram for a proposed explosion event whose fireworks would ignite the French Post-Impressionist Paul Cezanne’s Mont Saint Victoire with a dragon form scaling its heights, literally fusing East and West to produce a new cultural intelligence outside of linear time.

Beijing’s winning bid to host the 2008 Summer Olympics conferred validation on China’s emergence as a global power. Skeptical of the party-state’s Olympic motto, “One World, One Dream,” the artists and collectives in this section created their own utopian projects, seeking to effect social change through direct action with online and real communities. The common medium was the Internet, as in the Shanghai Contemporary Art Archive Project (1998-2012) that used the Internet’s open forum to produce China’s first online contemporary arts community; or Cao Fei’s RMB City (2007-11), a dystopian Chinese city on the interactive platform Second Life. Ai Weiwei’s activist use of the Internet culminated in Citizens Investigation (2009-10), where hundreds of volunteers helped identify and post the names of over 5000 children who had perished in shoddily built state schools during the 2008 Sichuan earthquake.

The final gallery in the exhibition presents three works, each created to mark an anniversary of the June 4, 1989 Tiananmen Incident. The central installation by Gu Dexin, 2009-05-02 (2009) is composed of 38 panels of striking red text that repeats eleven lines confessing atrocities, including “we have eaten people.” This alludes to the modernist writer Lu Xun’s masterpiece short story, “Diary of a Madman” (1918), a veiled critique of authoritarian societies that value collectivism over the individual.

Theater of the World

The exhibition title derives from an installation by Paris-based artist Huang Yong Ping originally presented in Stuttgart in 1993. Theater of the World (1993) is a cage-like form whose interior houses different species of insects and reptiles. Constituting a metaphor for the era of globalization, it is inspired both by Chinese cosmology and by Western enlightenment ideas of the panopticon as a structure of control, together with Michel Foucault’s critiques of modernism.

To help visitors become familiar with the contents and concepts of the exhibition, the Museum presents a number of aids to understanding it more fully in the educational section of the show. One is a chronology of the main artistic and political events that took place in China and the world between 1989 and 2008. Another is a selection of express videos presenting several of the artists taking part in the exhibition, like Lin Tianmiao, Qui Zhijie, Yu Hong, Zhang Peili, Liu Wei, Xu Zhen and Xu Bing, together with a documentary made by CNN that provides an overview of the project and the works shown. Finally, to enhance the educational experience of the visit, an extensive audioguide has been produced for use free of charge.

The following are the main educational activities tied in with the exhibition:

Roundtable on Art and China after 1989 (May 9)
A meeting with key exhibition artists Zhang Peili, Huang Yong Ping and Shen Yuan in conversation with the show’s curators Alexandra Munroe, Philip Tinari and Hou Hanru.

Ai Weiwei film season (June 1, 2 and 3)
Film season with a selection of works by the artist and film-maker Ai Weiwei.

Catalogue
Art and China after 1989: Theater of the World is accompanied by a 324-page catalogue and a range of integrated digital resources. In addition to essays from the exhibition’s three curators, the catalogue features extended annotations on more than 70 of the objects on view, including interpretive analysis by scholars such as Katherine Grube, Lu Mingjun, Stephanie H. Tung, and Xiaorui Zhu-Nowell. It also includes an exhibition history of the period under consideration, prepared by Anthony Yung and Jane DeBevoise of the Asia Art Archive, Hong Kong.

Curatorial team of the exhibition
Art and China after 1989: Theater of the World is organized by Alexandra Munroe, Samsung Senior Curator, Asian Art, and Senior Advisor, Global Arts, at the Solomon R. Guggenheim Museum. Guest co-curators are Philip Tinari, Director of the UCCA, Beijing, and Hou Hanru, Artistic Director of MAXXI National Museum of 21st Century Arts, Rome. Kyung An, Assistant Curator, Asian Art, and Xiaorui Zhu-Nowell, Research Associate and Curatorial Assistant, Asian Art, Guggenheim Museum, have provided organizational support. Archival research has been developed in collaboration with Asia Art Archive, Hong Kong. The curators worked with an international advisory committee that has met under the auspices of the China Academy of Art, Hangzhou, and the Central Academy of Fine Arts, Beijing.

ARTISTS REPRESENTED IN THE EXHIBITION