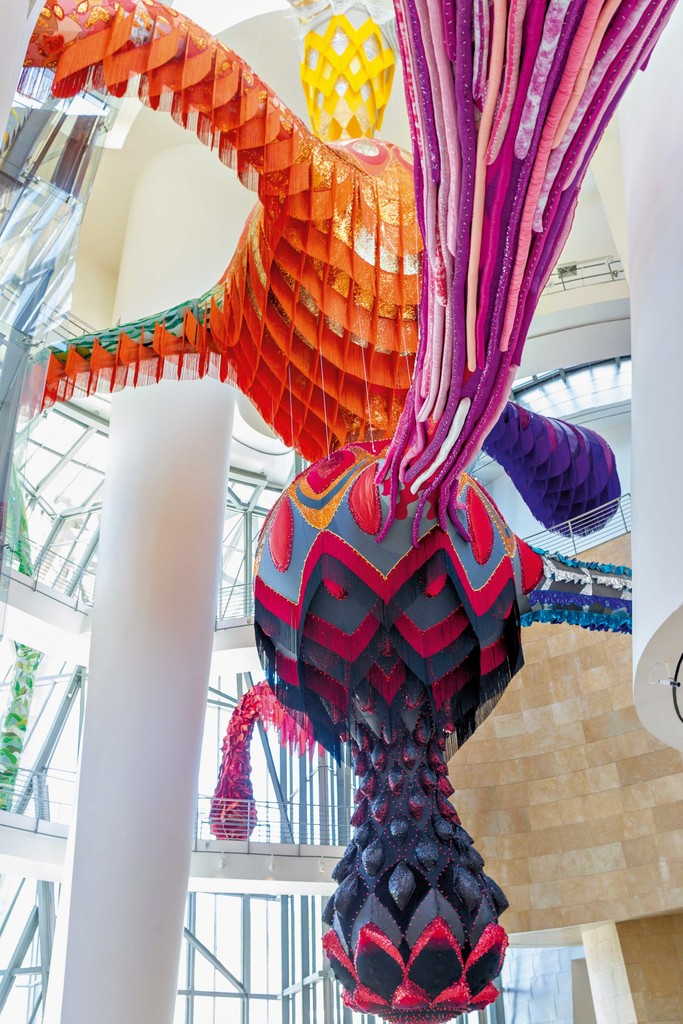 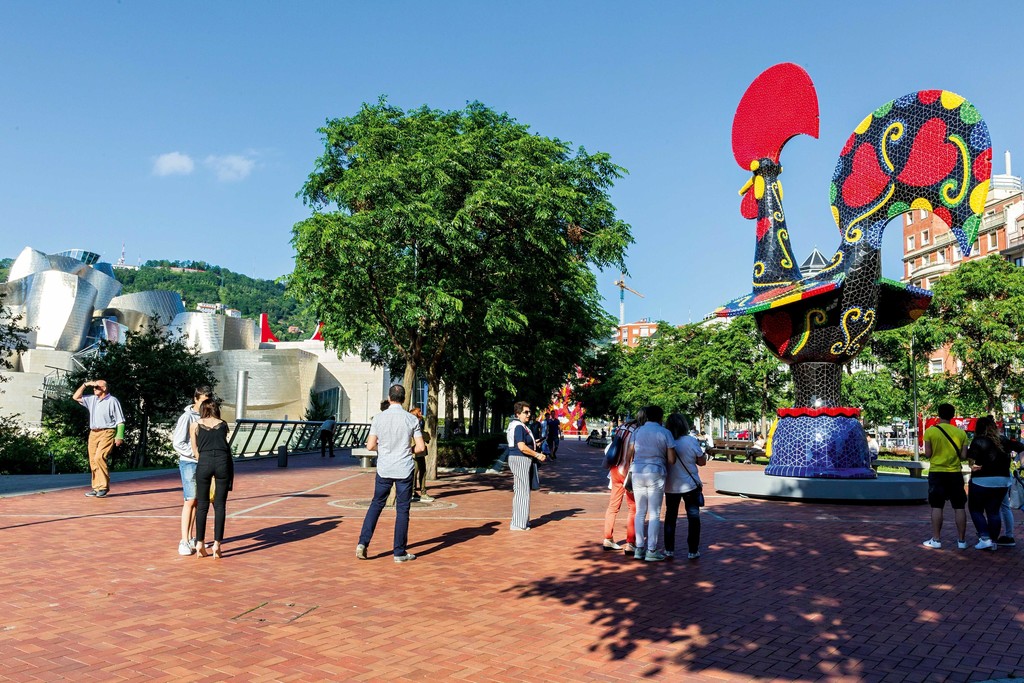 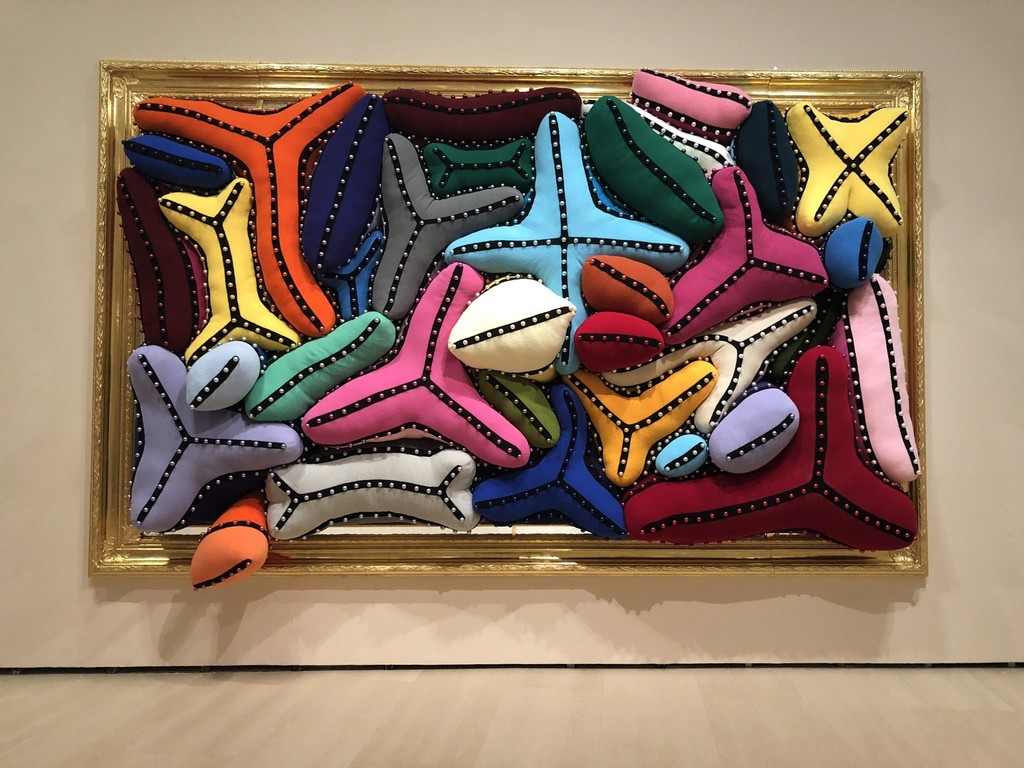 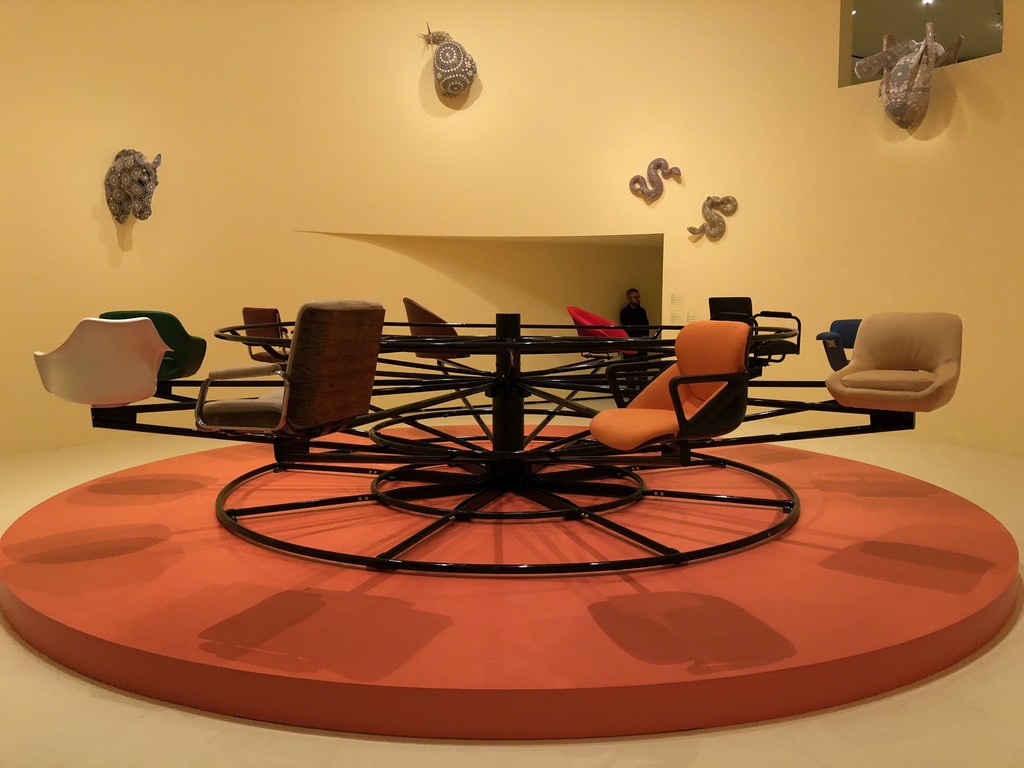 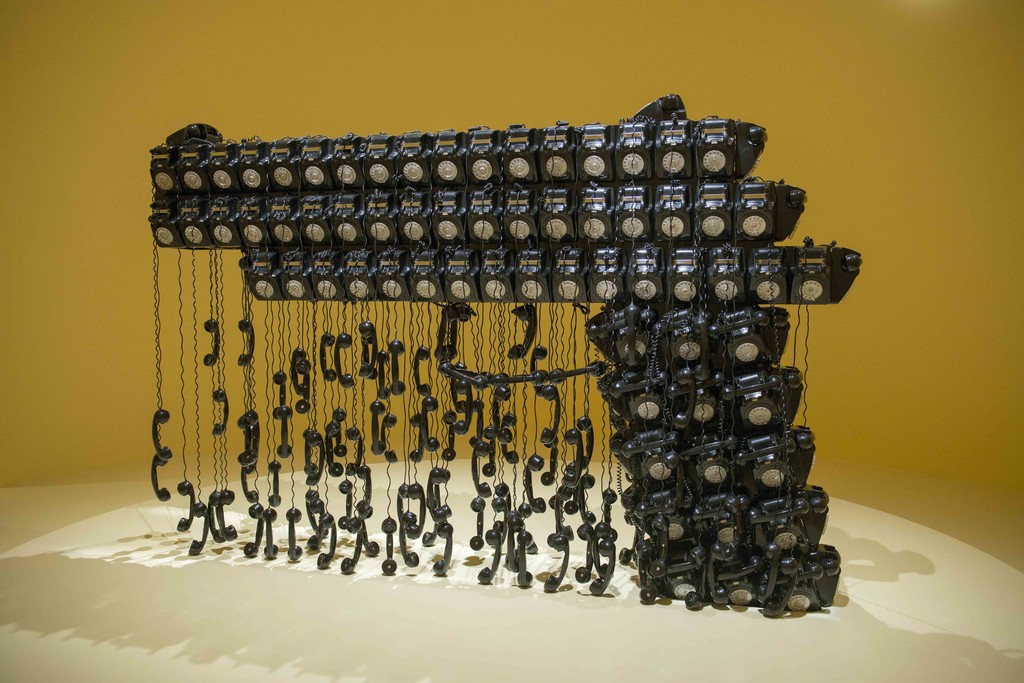 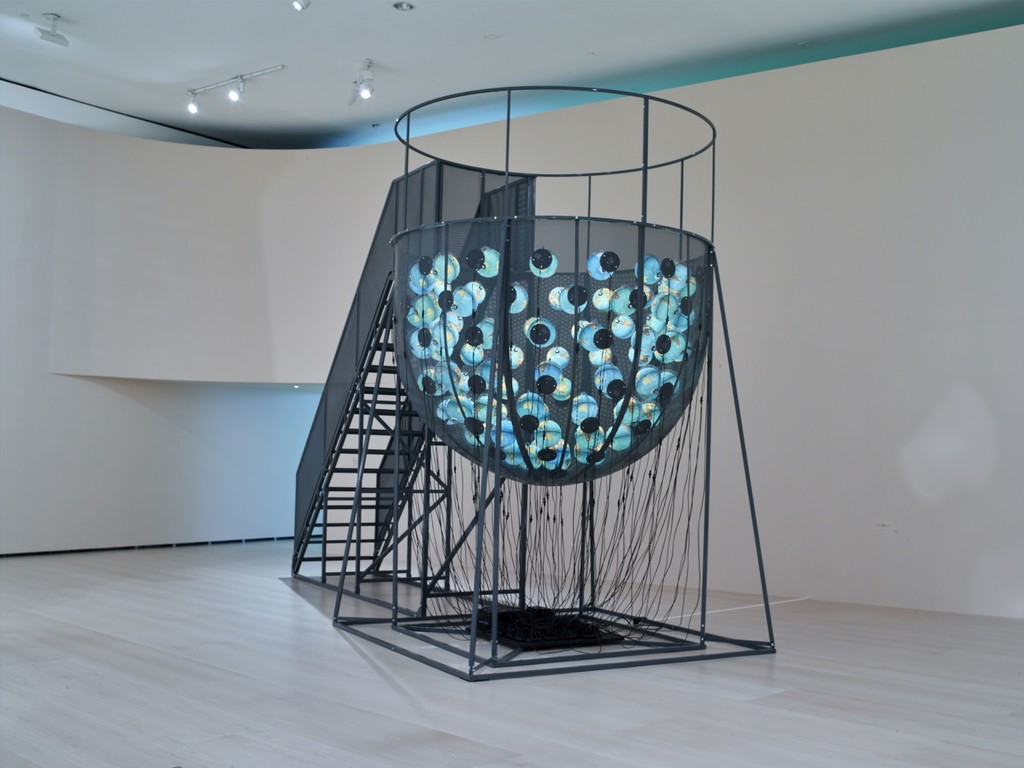  Through the construction of light-hearted yet strikingly direct images that refer to socio-political issues relevant to post-colonial, globalized and consumerist societies, Joana Vasconcelos addresses topics ranging from immigration to gender violence.

 Like an alchemist of daily life, the artist transforms the everyday objects and clichés of the consumer society into open artworks laden with meaning.

 The exhibition includes previously unseen works like I’ll Be Your Mirror, an enormous Venetian mask formed by mirrors framed in bronze, and Solitaire, a gigantic engagement ring made from the wheelrims of luxury cars and glass whisky tumblers, thus combining some of the most stereotyped symbols of masculine and feminine desire.

 Egeria, a work which spreads through the Atrium of the Museum like a plant made of different fabrics, colors and textures, constitutes a metaphor for the occupation of museums by women.

The Guggenheim Museum Bilbao presents the exhibition Joana Vasconcelos. I’m Your Mirror, a selection of thirty works produced between 1997 and the present day by the most internationally reputed Portuguese artist, including a site-specific installation for the Atrium of the Museum and various other new works. In this show, sponsored by Seguros Bilbao, viewers can submerge themselves completely in the universe of an artist with a direct and humorous vision of the world, whose work explains many of our society’s contradictions without any apparent effort.

Some of Joana Vasconcelos’ works are extraordinarily complex: they move, make sounds, or light up. These complications are resolved by the artist in her 3000 m2 Lisbon studio with the assistance of a team of more than fifty permanent collaborators. Vasconcelos uses a wide variety of materials from everyday life to make these works, such as household appliances, tiles, fabrics, pottery, bottles, medicines, urinals, showers, kitchen utensils, telephones, cars, and plastic cutlery. With them the artist constructs light-hearted yet strikingly direct images that refer to socio-political issues relevant to post-colonial, globalized and consumerist societies, addressing issues that range from immigration to gender violence. There is always a sense of humor, and the pieces suggest open, non-dogmatic meanings similar to the relational aesthetics that emerged in the late 1990s, since they too require the viewer to participate actively in the perception and interpretation of the artwork.

Rich in external references, from Louise Bourgeois to popular culture, from the goldsmith to the fashion designer, and from handicrafts to cutting-edge engineering, Vasconcelos’s oeuvre addresses identity in all its dimensions, among other key issues, and reflects on her position as a woman and a Portuguese and European artist. Other fundamental aspects of her work are the relationship her pieces establish with the architecture in which they are displayed, a metalinguistic reflection on the nature of the artwork, and the inclusion of purely poetic elements.

A TOUR OF THE EXHIBITION

The exhibition starts with some emblematic pieces from the early years of Vasconcelos’s career, such as Valium Bed (Cama Valium, 1999), Burka (2002) and The Bride (A Noiva, 2001-2005), where the artist dealt with issues of feminine identity in both the private and the political and social spheres. Alongside these, the show includes some of her most prominent recent works, such as Marilyn (AP) (2011), Full Steam Ahead (A Todo o Vapor, 2012) —with all three existing versions on display— and Call Center (2014-16). Once again, using kitchen utensils and household appliances, Vasconcelos continues to explore the theme of feminine identity with simplicity and irony. Marilyn consists of a pair of sky-high stilettos assembled with stainless steel pots, while Full Steam Ahead is composed of steam irons that move in what looks like a choreography for robots. In the meantime, Call Center is a huge black revolver made of Bakelite telephones that plays a lively and surprising electro-acoustic symphony created with the bells of the telephones by the composer Jonas Runa.

The exhibition also provides a unique opportunity to see the new works made specially for it, including I’ll Be Your Mirror, a giant Venetian mask made of mirrors framed in bronze; Solitaire, a monumental engagement ring made out of gilded wheelrims and glass whisky tumblers; and other works from the Urinals, Crochet Paintings and Bordalos series. Once again, these pieces explore female identity in different ways, such as the humorous appropriation of images by Marcel Duchamp and the ceramics of the Portuguese artist Bordalo Pinheiro, which Vasconcelos covers with crochet work. The artist also uses crochet to make soft, voluminous parodies of epic paintings which she then exhibits in gilt frames.

Egeria
The exhibition includes an enormous work from the Valkyries series made exclusively for the Atrium of the Guggenheim Museum Bilbao. There it will engage in dialogue with Frank Gehry’s complex spaces, undoubtedly making it one of the great attractions of the show. Vasconcelos’s Valkyries, named after the divinities of Nordic mythology, form what is now a large series of pieces with a bulbous and tentacular appearance that expand in long brightly-colored extensions through the spaces they are displayed in. These works, made in a mixture of fabrics, textures and colors, seem to grow like plants, becoming a metaphor for the occupation of museums by women.

I’ll Be Your Mirror
The work that gives the exhibition its title is an enormous and surprising Venetian mask created with mirrors overlapping like scales, each with a richly ornamented frame designed by the artist herself. Visitors are invited to look through the Gulliver-like mask from the inside or the outside, but at no point do they lose sight of their own image reflected in the many mirrors that make it up. The title is taken from the song I’ll Be Your Mirror, written by Lou Reed and performed by The Velvet Underground and Nico, whose promise is to reflect the true “self” like a mirror. It also shares territory with The Mirror, a short story by the Brazilian writer Machado de Assis; with the reflected image of the poem “I took off the mask and looked at myself in the mirror” by Fernando Pessoa, a master of the use of masks; and also with Jung’s analytical psychology, and particularly the process of individuation which leads to each person’s individuality and integrity, and the conciliation between the collective and personal unconscious once we have become aware of them.

Solitaire
Desire lies at the heart of the artistic concept of this work, in which gilded wheelrims from luxury cars form the circle of an enormous ring crowned by an inverted pyramid of whisky tumblers representing a giant diamond. The whole thing forms an engagement ring, also known as a “solitaire”, possibly one of the most desired objects in the world. The artist operates like an alchemist of everyday life, transforming the objects and clichés of the consumer society into open artworks laden with meaning. She thus resorts to common objects and multiplies them to create another object that is equally recognizable to all. This work makes use of the same strategy, combining two of the most stereotyped symbols of feminine and masculine desire respectively —diamonds and luxury cars— in the form of a gigantic engagement ring. From micro to macro, Vasconcelos offers us multiple dimensions that reflect a singular vision of the world, where the ever-present desire is investigated in relation to consumerism, one of the salient characteristics of the contemporary world.

This piece, as well as Pop Rooster, is installed outside the Museum.

As part of its Didaktika project, the Museum designs educational areas and special activities to complement each exhibition, offering tools and resources to help visitors understand and appreciate the works.

In this case, the Did you know…? section of the show’s website informs the public about the social causes supported by the artist through the Joana Vasconcelos Foundation, such as gender issues, universal education, accessibility, and children’s rights.

Here are some of the activities centered on the exhibition:

Round table: Joana Vasconcelos. I’m Your Mirror (June 27)
Joana Vasconcelos, the curators Enrique Juncosa and Petra Joos, and the therapist and naturopath Alain Grouette will talk about various aspects of the artist’s work.

Mask workshop (June 30)
A workshop on emotional self-knowledge and identity with reference to the work of Joana Vasconcelos. It is led by Alain Grouette, a Canadian therapist and naturopath, and expert in healing through energies. This is a full-day workshop with energy psychodynamics and mask-making in which participants can share experiences and enjoy Vasconcelos’s oeuvre. In English, with consecutive translation into Spanish.

Shared reflections*
On these unique visits, the Museum’s professionals show participants the ins and outs of mounting the exhibition and other curiosities.
• Curatorial viewing (September 19)
With Petra Joos, curator of the Guggenheim Museum Bilbao
• Key concepts (September 26)
With Marta Arzak, Deputy Director of Education and Interpretation of the Guggenheim Museum Bilbao.

With texts written by experts on the Portuguese artist’s work, the exhibition catalogue will include images of the making of the new works in the show and their installation in the spaces of the Guggenheim Museum Bilbao.

The Guggenheim Museum Bilbao is organizing an international tour of the exhibition in collaboration with the artist and renowned museums and institutions. The exhibition is scheduled to be presented at the Serralves Foundation in early 2019 and at Kunsthal Rotterdam in summer 2019.

Joana Vasconcelos (1971) lives and works in Lisbon. She has exhibited regularly since the mid-1990s. After her participation in the 51st Venice Biennale with her work The Bride (2001–05), her work won an international reputation. In 2012 she became the first woman and the youngest artist ever to exhibit at the Palace of Versailles, France. Recent highlights of her career include Trafaria Praia, a project for the Portuguese Pavilion at the 55th Venice Biennale in 2013; her participation in the group exhibition The World Belongs to You at the Palazzo Grassi/François Pinault Foundation, Venice (2011); and her first retrospective, held at the Museu Coleção Berardo, Lisbon (2010).