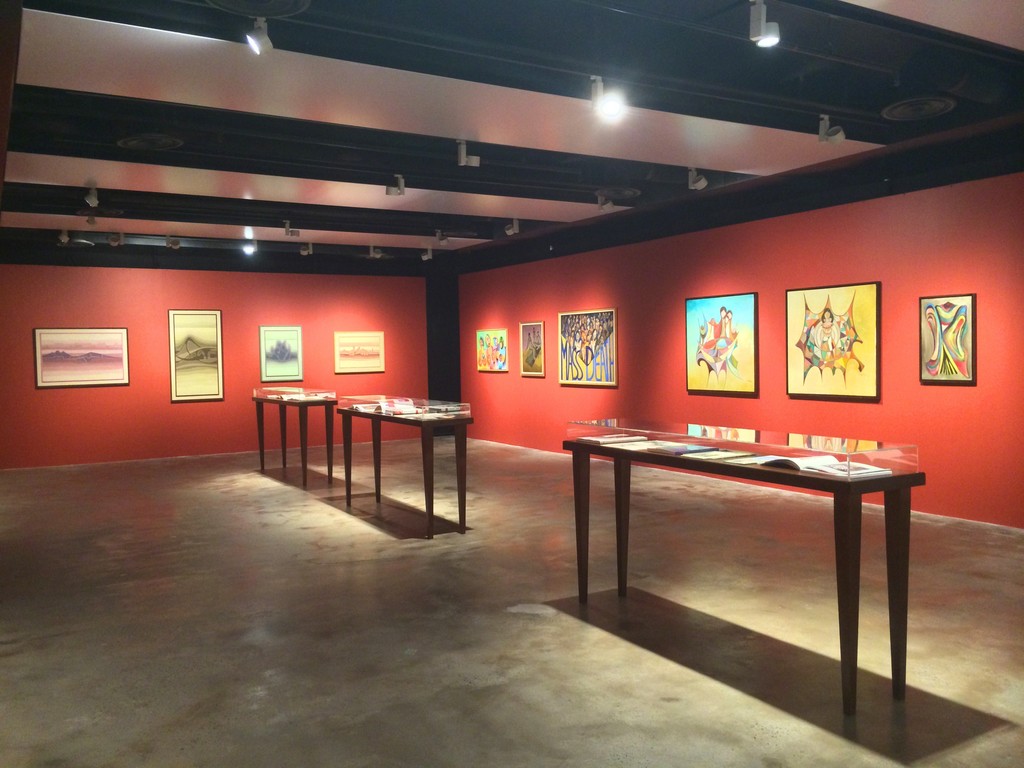 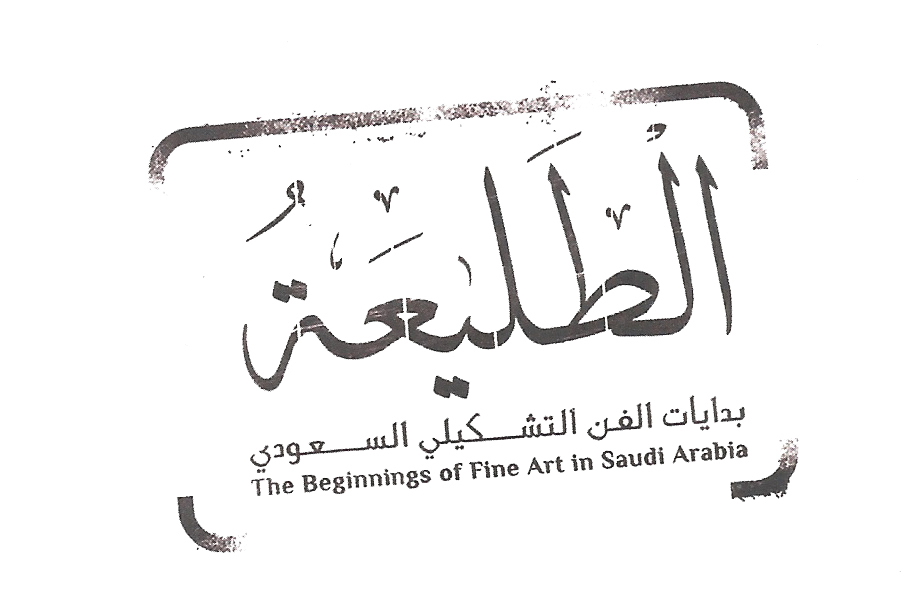 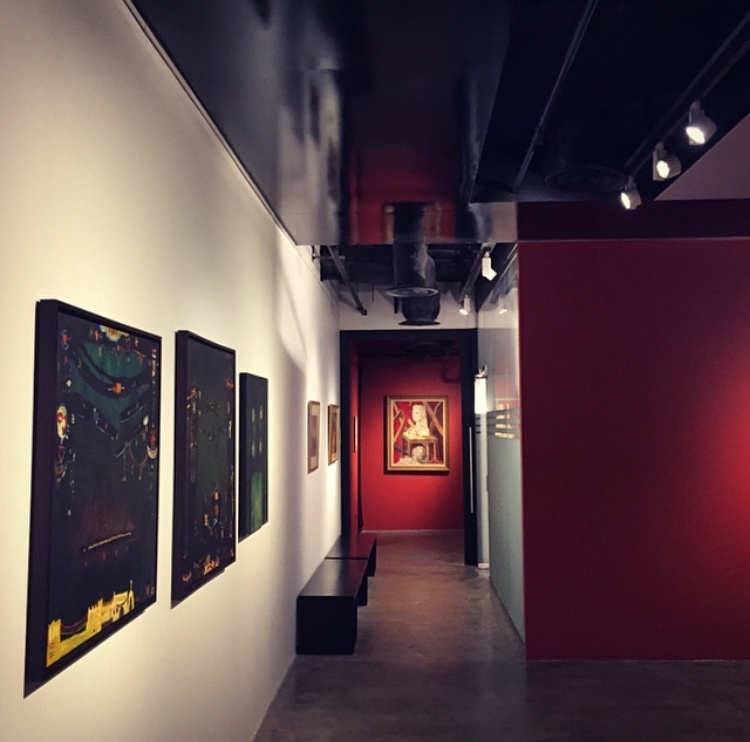 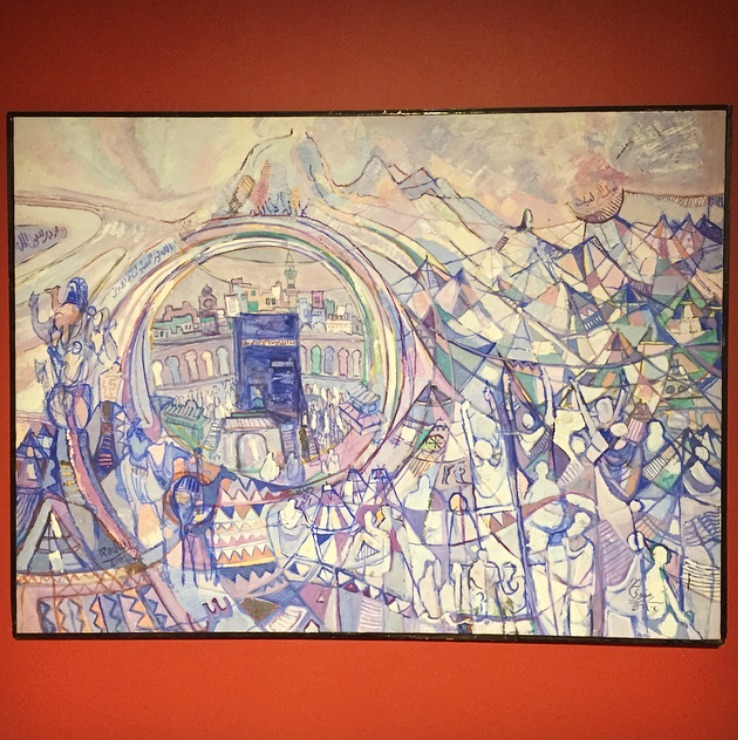 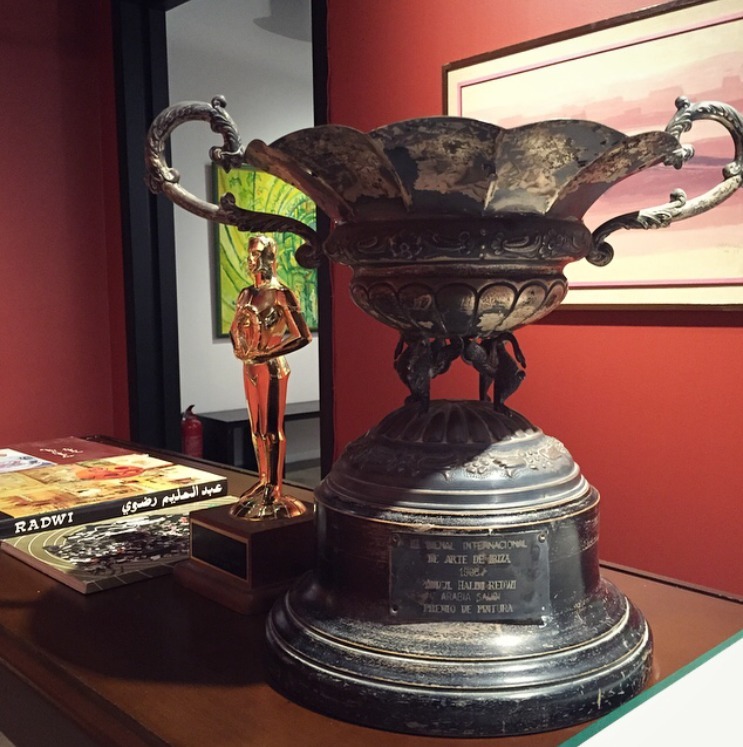 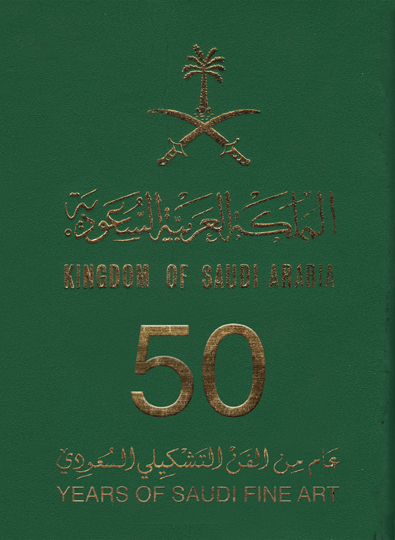 Art in Saudi Arabia developed thanks to the individual efforts of artists aiming to preserve local tradition and culture within a society that did not necessarily support art education and instruction in the same way as the neighbouring countries of Egypt, Lebanon, Iraq, and Syria. This national attitude of refusal to approach painting did not in still confidence in emerging practitioners of art. There was no pride associated in working in the arts, nor was much value attached to this career.
However, associations such as the Ministry of Education, the general president of Youth Care (currently the Ministry of Culture and Media), and significant writers of the time did participate in and create lively artistic activities within local society.
In the mid 1950s artist Abdulhalim Al Radwi (1939 – 2006) began to be acknowledged for his artistic talents, alongside his contemporary Abdul Rashid Sultan, which created competition between the Saudi Science students and the preparation school students as they participated in an annual activity held in Mecca in 1959. Alradwi distinguished himself by winning the first official painting competition in High School in Saudi Arabia and achieving first position in school for The Village, a work representing trees and clay houses. These were the early signs of his continued rise to fame.

Another emerging talent of the time was Muhammad Al Saleem (1958 – 2006). He became known the same year that art began to be formally taught in schools in Saudi Arabia. As a result of his artistic prowess, later in life Al Saleem was hired to teach painting at the same primary school he once studied at. In 1960 the artist received his first award in artistic education.
In the early 1960s the first group of Arab students to study abroad left for Cairo, whereas a second group traveled to study in Rome. The Ministry of Education in Riyadh established the first art institute in the region in 1965 with a mandate to train more art teachers.
AlRadwi was the first Saudi to study a broad and return to Riyadh as a teacher. His exposure to Western ideas and Modernism made him liberated in his artistic vision; his mind filled with new ideas, he passed them on to his students. Many of the students were not receptive to such free thinking, however there were some who responded well to this new form of instruction, and there were some students who liked him very much. Al Radwi continued teaching in the school until his move to Jeddah. Al Saleem had been at the Fine Arts Academy in Florence, Italy and upon his return to Riyadh he worked as a decorative engineer for a Television channel.

The establishment of the Artistic Education Institute in 1965 and the support of the General leadership of Youth Care was a turning point for artistic production in Saudi Arabia. There were many students graduating from the institute who later went on to became the most important artists of the Kingdom; Youth Care also supported art and artists at various levels, including Abdul Jabbar Al Yahya (b. 1931) and Taha Al Sabban (b. 1948), who did not have academic art degrees but were self taught and were able to make a place for themselves within this art scene. Other artists received training from Arab and local colleges, these include Abdullah Al Shaikh (b. 1936), who graduated from the Institute of Fine Arts in Baghdad in 1959 and was the first artist to obtain an academic degree in art. Mohammed Al Resayes (b. 1950) and Abdullah Hamas (b. 1953) graduated from the art institute in Al Riyadh, and Abdulrahman Al Soliman (b. 1954) graduated from the Teachers Institute in Al Dammam.

Youth Care also played a main role in caring for the artists by encouraging artistic talents, and providing structure and formal character to art activities, which enhanced Saudi art both nationally and internationally.

The above information provides a historical overview of the development of Saudi art and the participating artists in the exhibition. Regarding creative practices and forms used by artists prior to the generation under discussion it seems their subject matter included different perspectives of local and universal human activities. Later movements such as Cubism, Impressionism, Surrealism, Abstraction, and the like came into the mix. The education that artists received in the West, coupled with their creative imagination and what was happening in neighbouring Arab countries in terms of aesthetics all came together to create a new type of art whose most significant feature was the discovery of a distinct national identity that needed to be defined and asserted.
This process was difficult but the involved artists did not stop looking forward. The realisation for the need to define identity came out of extensive conversations about contemporaneity and authenticity, as well as formal ideas from Youth Care. Later the artistic experience moved into local reality as well as Western aesthetics, which made the artists reconsider creative approaches that would help enhance local art.

There were distinct groups composed of pioneering artists and their works; those patterned after the West; the audience ignorant about art, representational artists; and ones practicing extreme Modernism. In between all of this the artist chose his visual subject from his real environment alongside the demands of art audiences, and a desire (and an attempt) to create art from reality, not its opposite. For a long time, the above mentioned issues worried artists, as some of them attempted to create a new and modern Arab artistic experience while others went on considering that they must be on good terms with society—for them it was more important than the changes and developments being created within art. In this struggle all artists took part in extended conversations. Pioneer artists wanted to bring stability to heritage and tradition, promoting dialogue about contemporaneity and authenticity, yet applying it in the time they lived was never easy.
In the 1980s limitless conversations shaped and helped advance works contrary to the Western tradition. During this time three recognisable styles adopted by the pioneer artists revealed themselves in art. The first was a direct relation to heritage, tradition, and habit; the second held that tradition and heritage were obstacles in the way of their creations; the third was somewhere in between, calling forartto be more flexible, possibly moving towards Modernism and not rigidly tied to old patterns.

Generally, the pioneer artists in the local art scene renewed their visual experiences, and developed the aesthetic vision that wavered between being inspired by heritage, tradition, and what they learnt from experience and technique in school; some of them were able to create attractive works that were considered valuable and distinguished. These innovations furthered the art experience as simple gestures changed into real visions belonging to new aesthetic and theoretical conditions. The most important issue unearthed during this time was the upholding of a national identity.

During discussion of paradoxical approaches to art making, pioneer artists did suffer from marginalisation as some societies in neighbouring Arab countries did not believe in art, were adversarial to such expression, or had limits to their understanding. However the artists chose to work hard, producing an aesthetic inspired from heritage, working to blend it with modern approaches, and the result was successful. In the end many artists also chose to be involved in art issues, an adventurous journey in which one does not know what the ending has in store. Such daring artists are considered a complex generation, most of them lived as if inside a maze, also often working in isolation, and some of them who were not involved in art debates then are important nonetheless as together they played an important role in creating Saudi art.
The brilliant experiences left for us a heritage of contemporary painting, representing their sensibility on different issues, making art a living language referring to the local memory, and their works and creativity went far from copying, some of them worked to promote art tirelessly.
We have great hopes in reaching delightful days when such artists are appreciated internationally as a result of their adopted aesthetic and theoretical conditions in the shadow of the new and fast changes that move art into the developed place that everyone once had dreamed of.