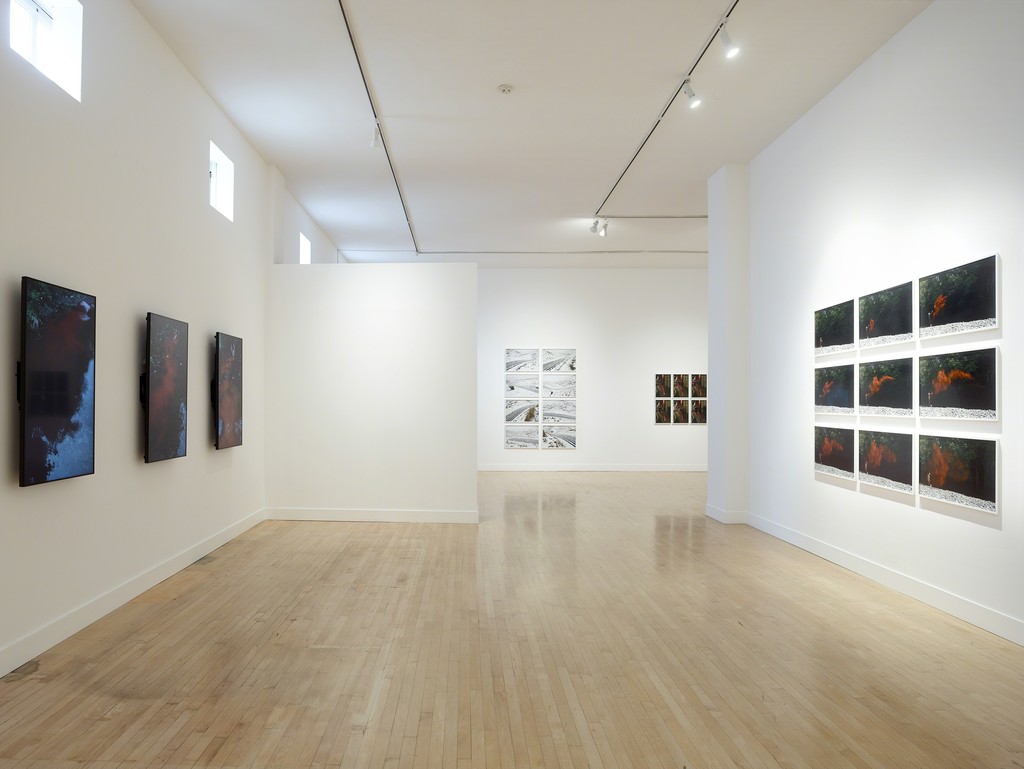 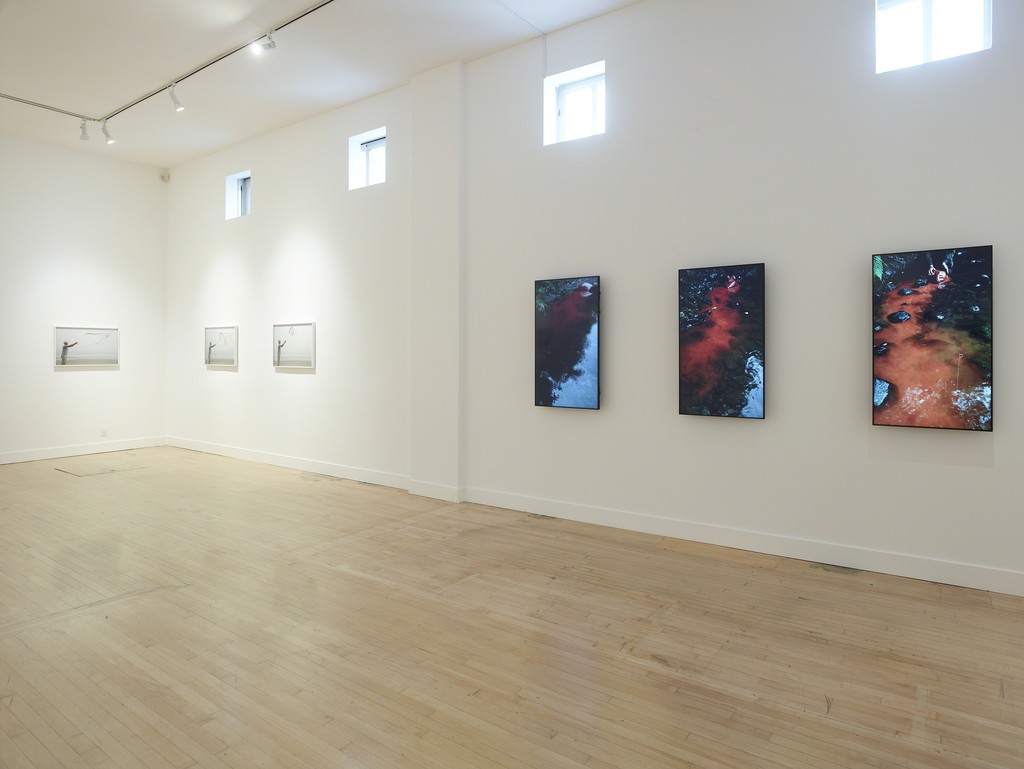 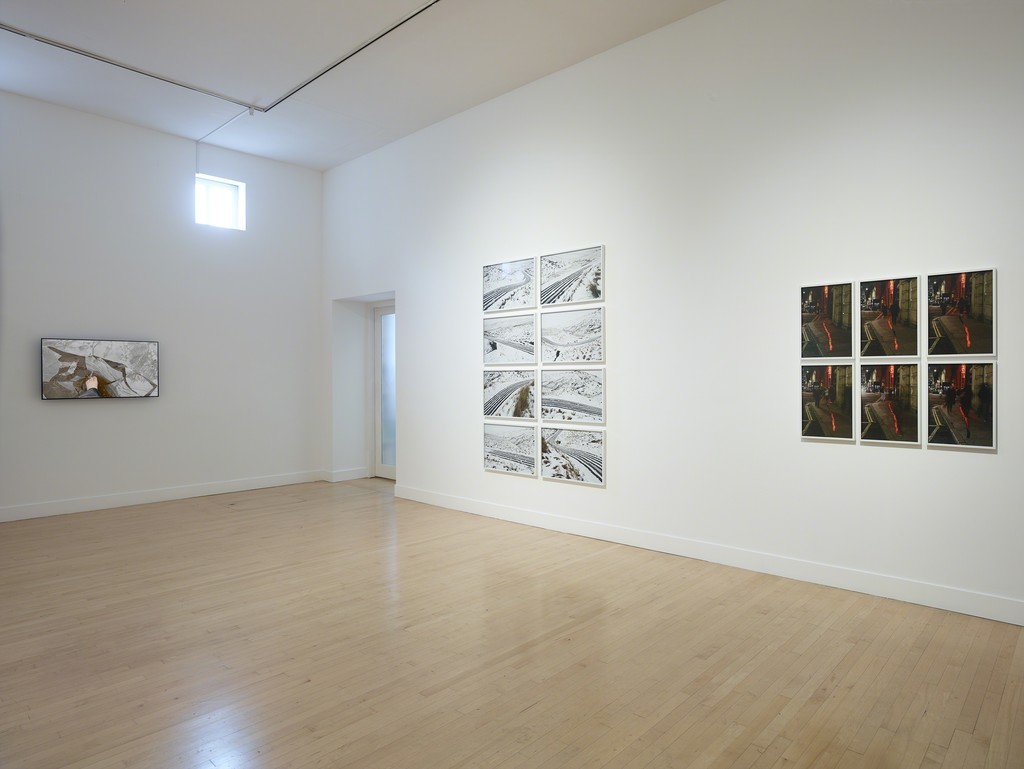 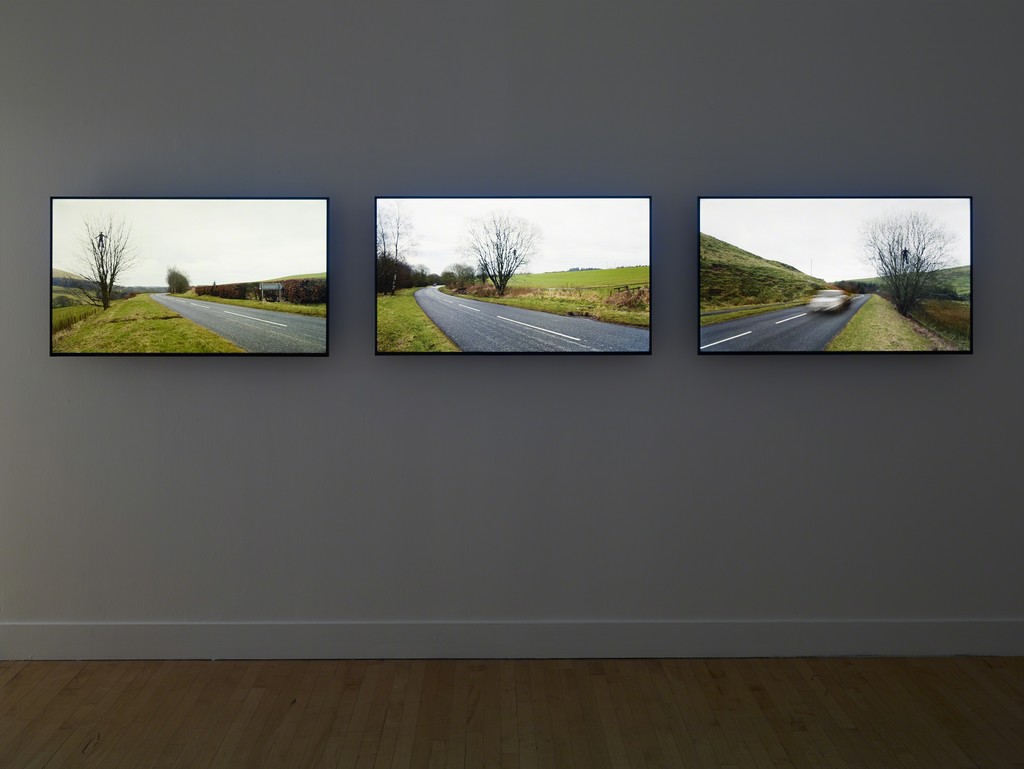 Working with natural materials such as dust, rock, ice, water, and kelp, Goldsworthy is well-known for creating ephemeral moments of striking formal beauty that often originate from and illuminate the inherent character of the local site. A key characteristic in many of the artist’s recent works is the use of these materials to “draw” within the landscape, making marks that change as the elements around them exert influence. The artist’s latest recent single- and multi-panel photographs often reflect transformations that have taken place over time. In Red. Water. Line. London, England. 16 January 2017, for example, Goldsworthy captures in six panels the reflection of a red neon sign on a trail of water. The crimson glow plays across the water, reconfiguring itself in each shot. This is one of several works on view that calls our attention to aspects of the built environment, including urban settings such as roads, city steps and buildings.

Other works in the exhibition relate directly to a career that spans continents and decades. Red river stone. Crushed
into dust. Thrown. Dumfriesshire, Scotland. 30 May 2016, which sees the artist throwing red dust in the air to create a temporal cloud, reflects an ongoing part of his practice taken to new heights.

Drawing Water Standing Still also features several new videos, all on view for the first time on the West Coast. Some
are body-based incursions within the terrain, at once visceral and proximate, such as Ice walk. Dumfriesshire, Scotland. 6 January 2016, which traces Goldsworthy’s own strenuous physical incursion into the landscape. Other videos, such as Pass. Dumfriesshire, Scotland. February, March 2016, find the artist frozen within the scenery, a still center in the moving world, somehow stepping outside of time. It is this possibility of action through stillness that the exhibition’s poetic title is meant to suggest. While video works are an integral part of Goldworthy’s oeuvre, this is the first time that they comprise such a significant part an exhibition at the gallery, signaling a subtle transformation in the artist’s practice.

The exhibition Drawing Water Standing Still is being presented in tandem with Leaning into the Wind, a new, full-length documentary film exploring Goldsworthy’s practice, which made its world premiere at the San Francisco International Film Festival this April.