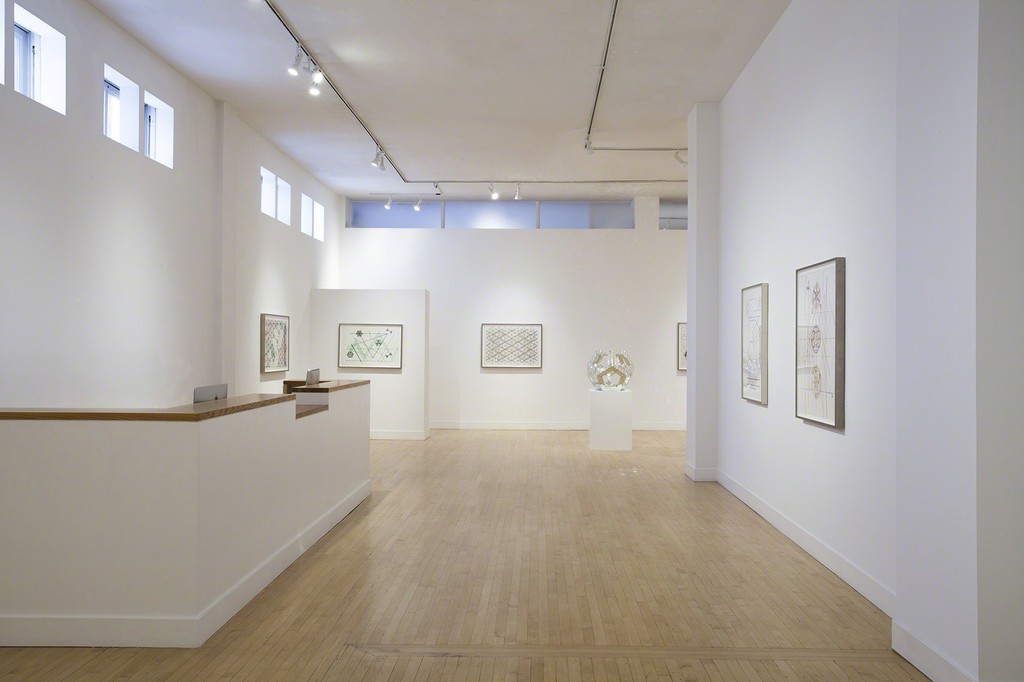 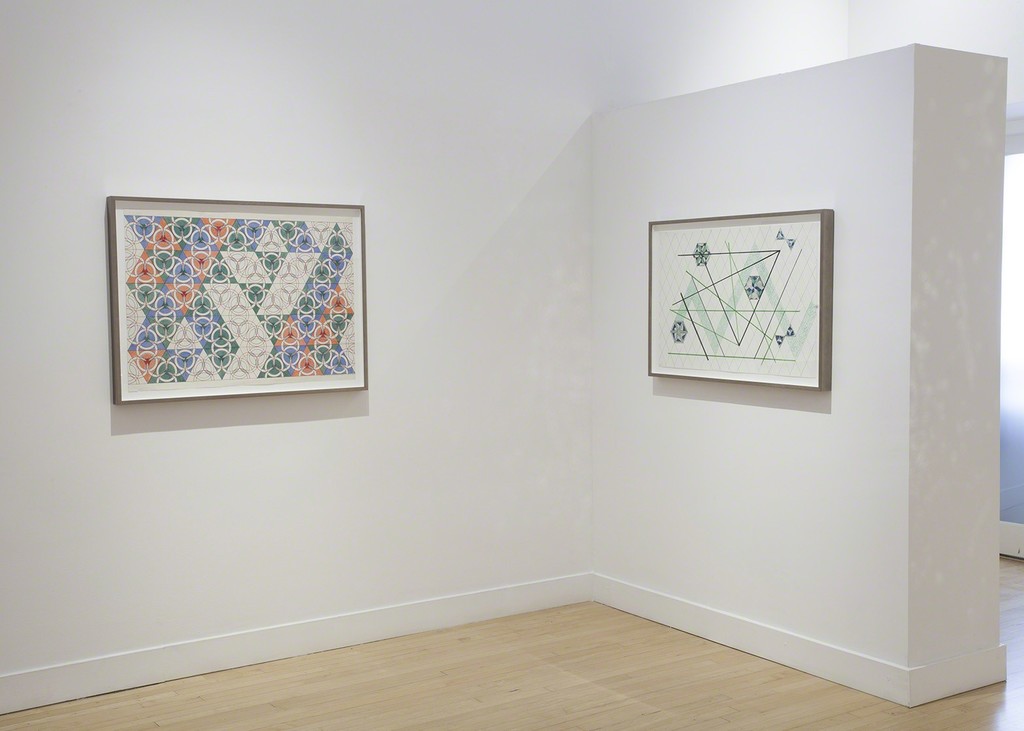 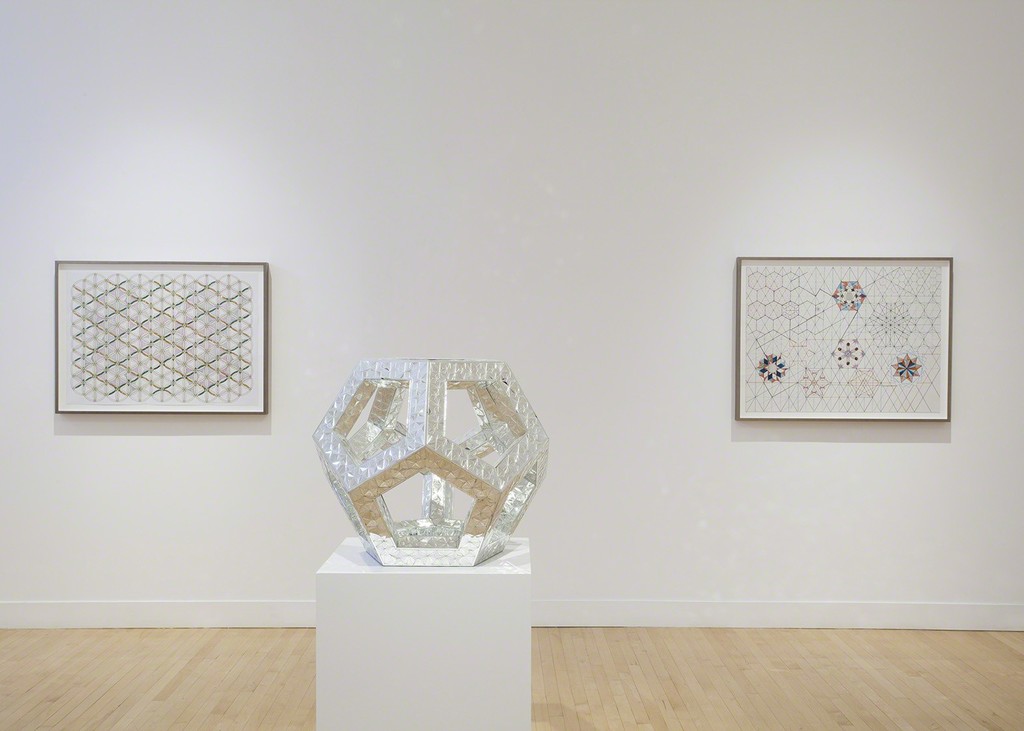 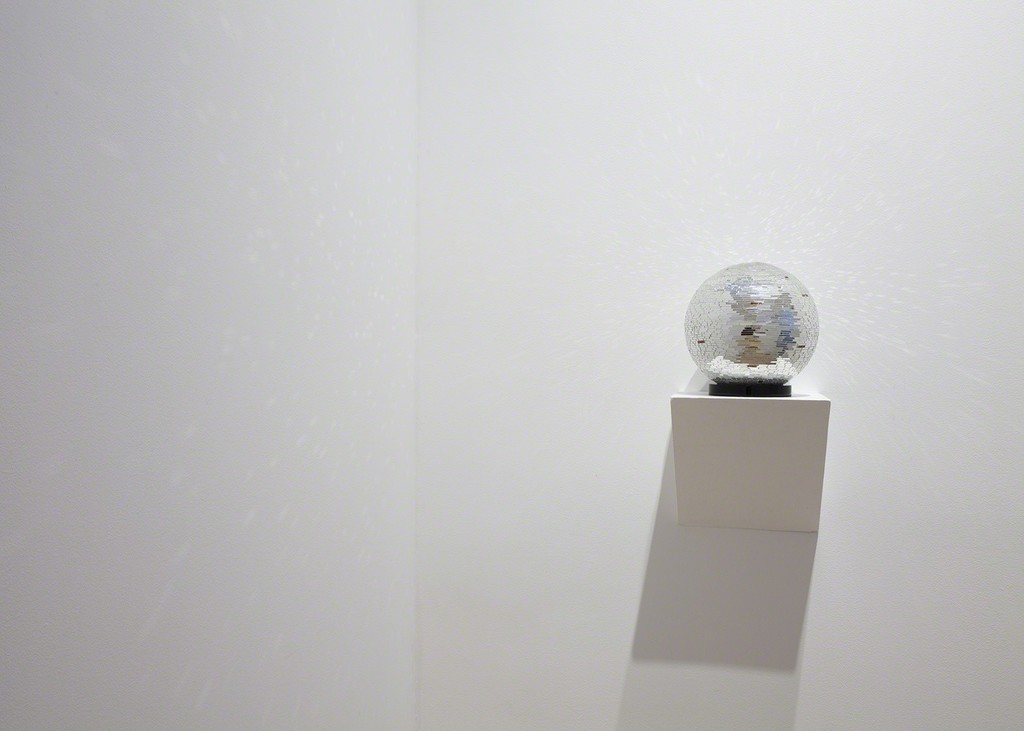 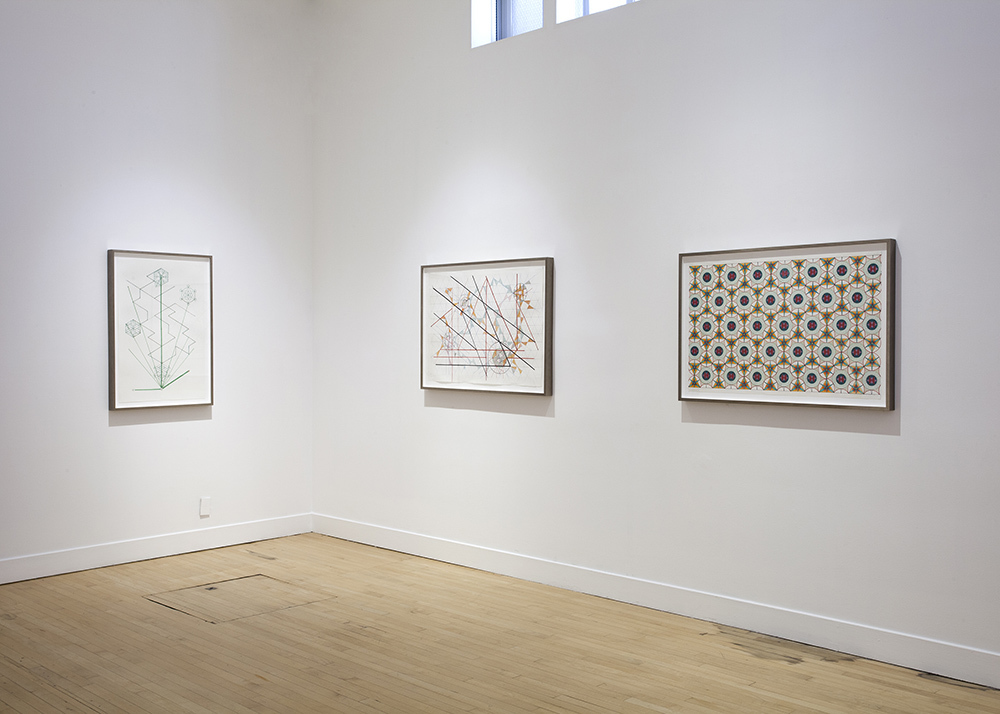 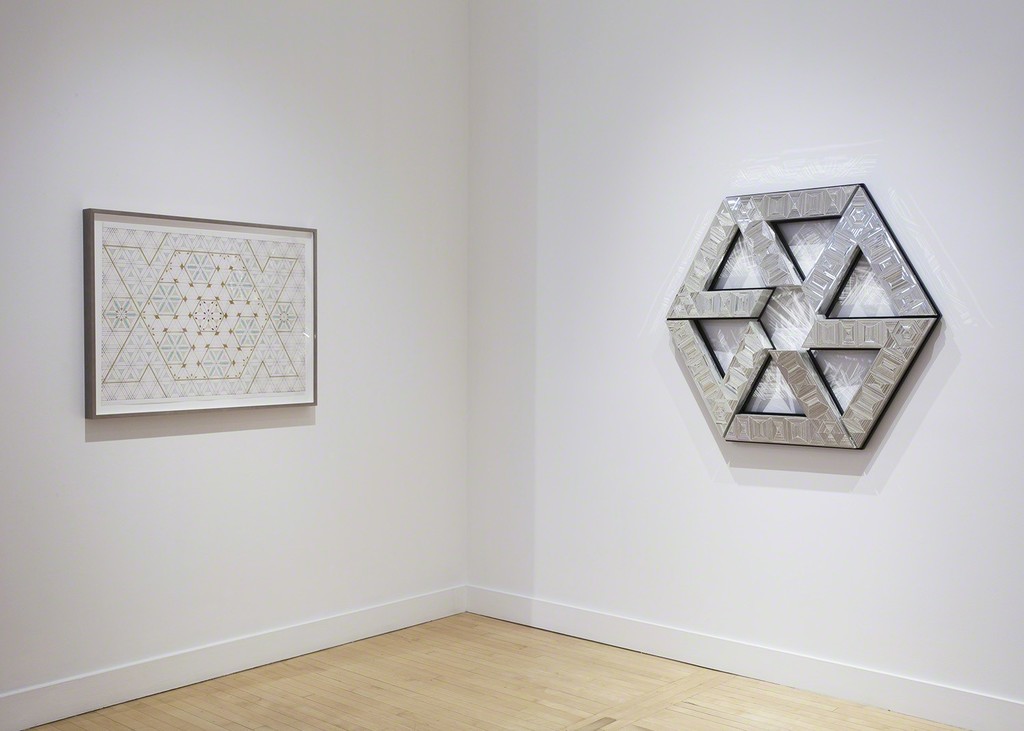 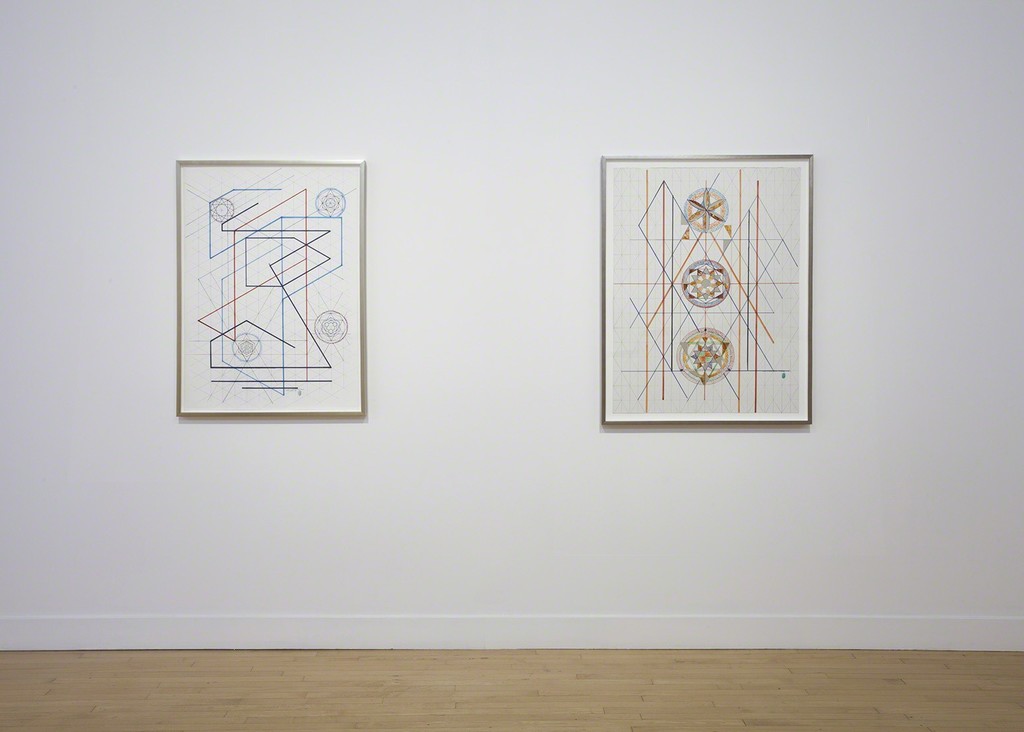 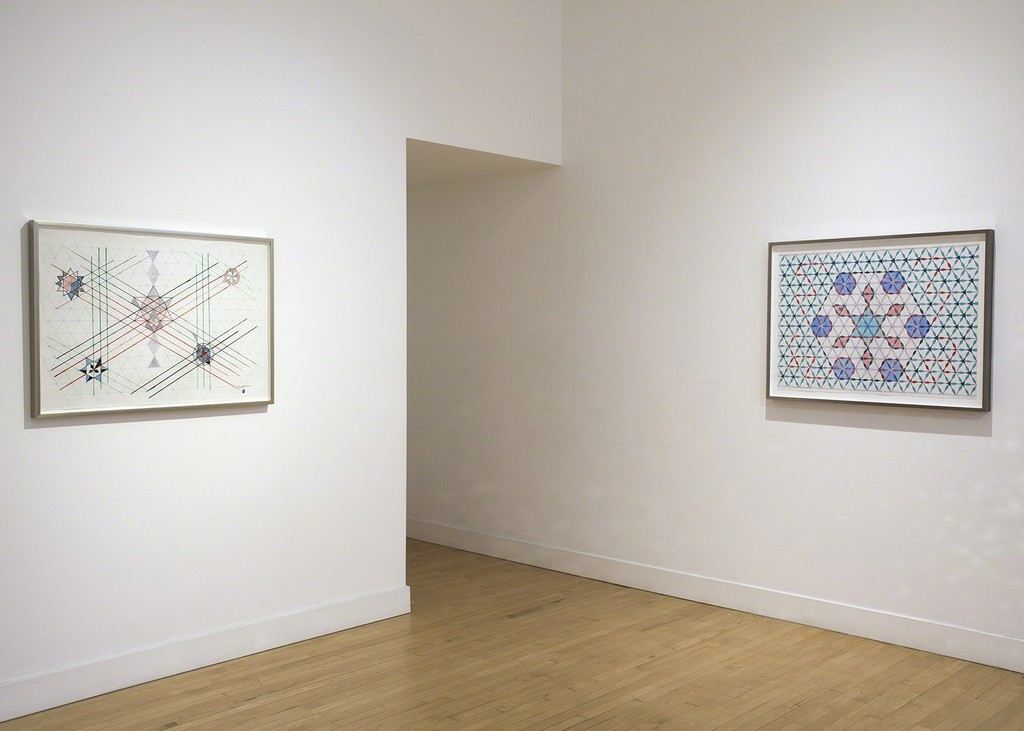 Haines Gallery is pleased to present Based on the Hexagon: The Recent Drawings of Monir Farmanfarmaian, the artist’s second solo exhibition on the West Coast. The show is being held concurrently with Farmanfarmaian’s critically acclaimed retrospective exhibition at the Solomon R. Guggenheim Museum (through June 3), which premiered at the Fundação de Serralves–Museu de Arte Contemporânea in Porto, Portugal before traveling to New York.

Focusing on Farmanfarmaian’s extraordinary works on paper—many of which use the hexagon as an essential building block—Based on the Hexagon reveals the artist’s bold innovations in this medium, which constitutes a significant contribution to her oeuvre. With their jewel-like surfaces and intricate, interlocking forms, Farmanfarmaian’s works on paper combine the sacred geometry of her native Iranian culture with the modernist abstraction of the 20th century. The result is a singular aesthetic fusion of Persian pictorial language and pristine geometry unlike any other. Now in her 90s, Farmanfarmaian continues to create works of dazzling intensity.

“For me,” Farmanfarmaian has said, “everything starts with the hexagon.” In the Sufi traditions inflecting Persian art and architecture, the hexagon has many meanings. Its six sides can be representative of the directions: forward, backward, right, left, up and down; as well as the six virtues: generosity, self-discipline, patience, determination, insight and compassion. The hexagon is often the basis for both the floral and geometric patterning in media that range from religious mosaics to woven textiles. The multifaceted nature of the hexagon’s symbolism is reflected in the works presented here, produced between 2008 and 2015, which incorporate ink, glitter, colored pencil, carefully cut mirrors, and reverse-glass painting to create kaleidoscopic compositions. Interlocking and concentric circles also figure prominently in some of these pieces, returning us to the foundation of Monir’s earliest abstract sculptures from the mid-1970s. At once meditative and dynamic, expressive and analytic, her latest drawings reveal Farmanfarmaian to be at the peak of her career.

As the artist Shirin Neshat has observed, “Monir’s enduring appeal stems from her ability to navigate and find a balance between traditionalism and the avant-garde, past and present, the rooted and the nomadic. Her art, wisdom, strength, humility, and vigorous energy have earned her a legacy that will continue to prevail over time.” The curator Hans Ulrich Obrist has called Farmanfarmaian, “A role model for the artist of the twenty-first century.”

Based on the Hexagon is complimented by a full-color, hardbound publication, Monir Shahroudy Farmanfarmaian: Works on Paper, an illustrated interview by Hans Ulrich Obrist and others, published by LUMA Foundation, Koenig Books, Marta and Cosentino (2015). Many of the works presented at Haines Gallery are reproduced in this beautiful volume.

Monir Farmanfarmaian (b. 1924, Qazvin, Iran; lives and works in Tehran) has spent the last half-century articulating her singular vision through mirrored mosaics, reverse-glass painting, and works on paper that recall both Qajar-era Persian interior decoration and the reductive abstraction of the 20th century. Her artistic evolution has been shaped at once by cataclysmic geopolitical upheavals, ancient Persian traditions, and the New York art scene of the 1950s. The arc of Farmanfarmaian’s creative development is one of the great stories of contemporary art.

When the outbreak of WWII prevented Farmanfarmaian from studying in Paris, the artist settled in New York, where she lived from 1945 to 1957—first as an art student at Parsons and Cornell University, and later as a fashion illustrator for the department store Bonwit Teller, where she worked alongside Andy Warhol. It was in New York that Farmanfarmaian absorbed the development of geometric abstraction and found a welcoming community of artists that included Milton Avery, Alexander Calder, Joan Mitchell, Louise Nevelson, and Frank Stella, among others. These experiences, combined with her deep knowledge of the arts and crafts of her native Iran, resulted in a personal vision that marks the creation of a truly global modernity, organically arrived at through a synthesis of conflicting cultural forces.

Following her marriage, the artist returned to Iran, where she began to study, collect and preserve the traditional decorative arts of her home country. However, the 1979 Iranian revolution led Farmanfarmaian and her family once again to New York, where they would remain in exile for the next 26 years, leading to a reduction in her her creative output. In 2005, Farmanfarmaian moved back to Tehran, reestablishing a vibrant studio where she works with some of the same craftsmen she has known since the 1970s. Since her return to Iran, there has been an immense international resurgence of support for Farmanfarmaian’s practice.

The artist first received significant attention in 1958, when she was awarded a gold medal for her work in the Iranian Pavilion at the Venice Biennale, leading to exhibitions in Tehran, Paris and New York. More recently, her artwork has been exhibited at major institutions and exhibitions worldwide, including the Museum of Modern Art, New York; Haus der Kunst, Munich; the 29th Bienal de São Paulo, Brazil (2009), the 6th Asia Pacific Triennial of Contemporary Art, Queensland, Australia (2010) and Prospect 3, New Orleans (2014). She is the subject of a substantial monograph, Monir Shahroudy Farmanfarmaian: Cosmic Geometry, edited by Hans Ulrich Obrist of the Serpentine Gallery, London; the co-author of a biography, A Mirror Garden (Knopf, 2007); and the focus of a recently completed documentary film. Farmanfarmaian’s work has been collected by institutions around the world, including: Tate Modern, London, U.K.; Museum of Fine Arts, Boston, MA; and Metropolitan Museum of Art, New York, NY.