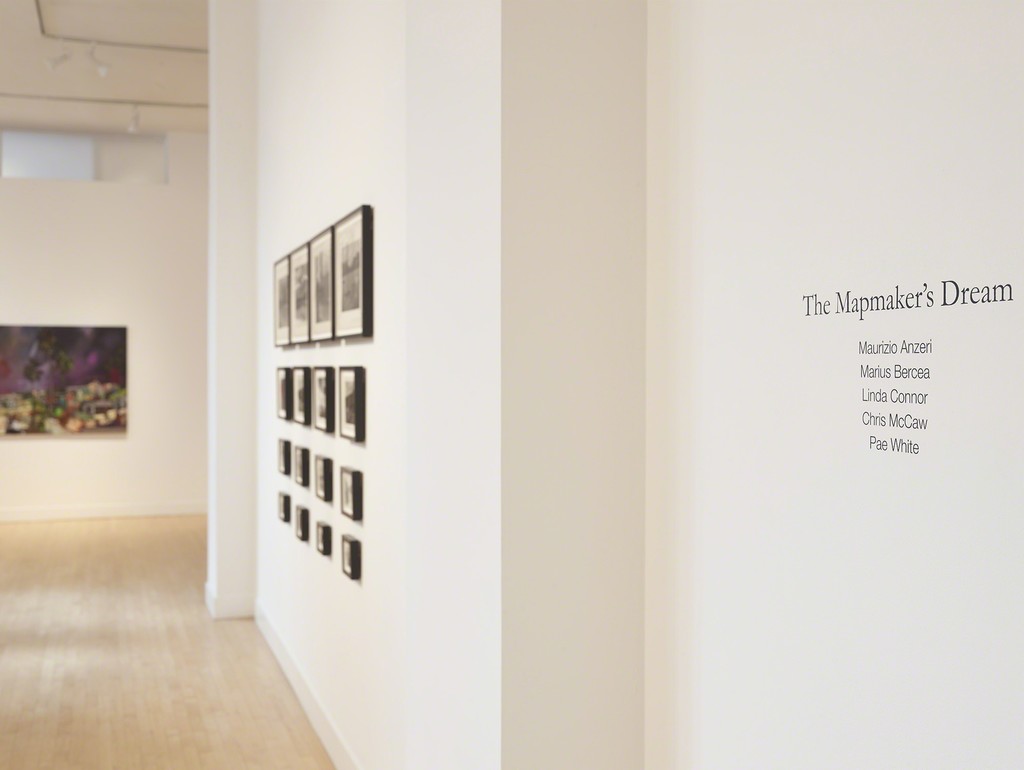 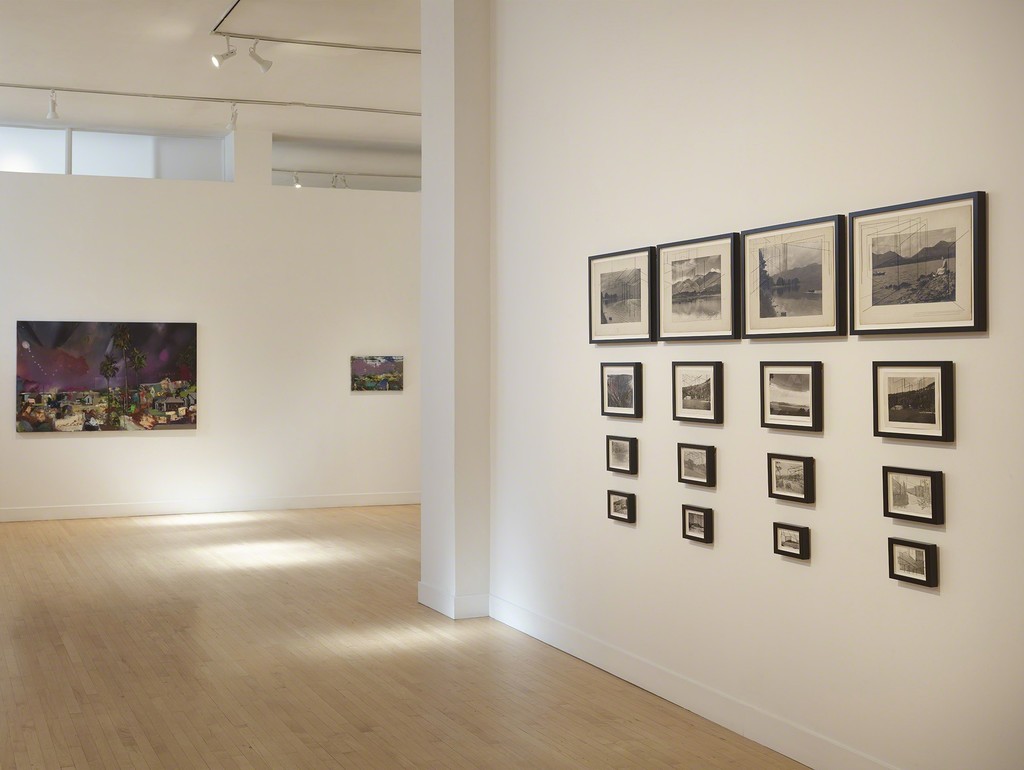 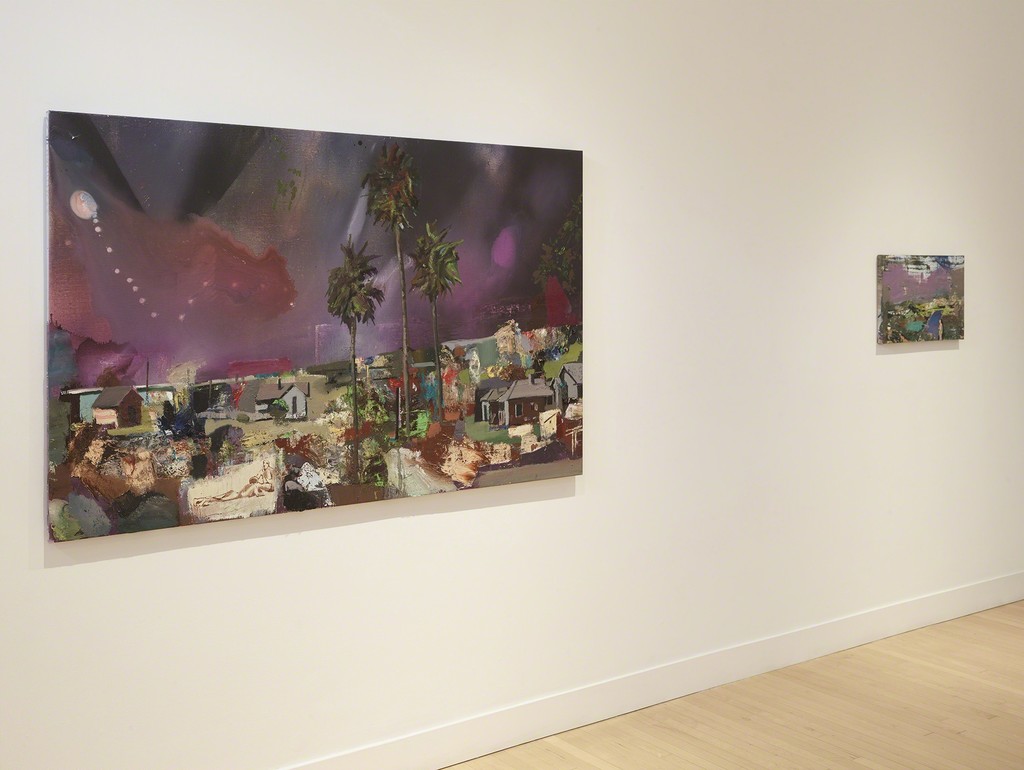 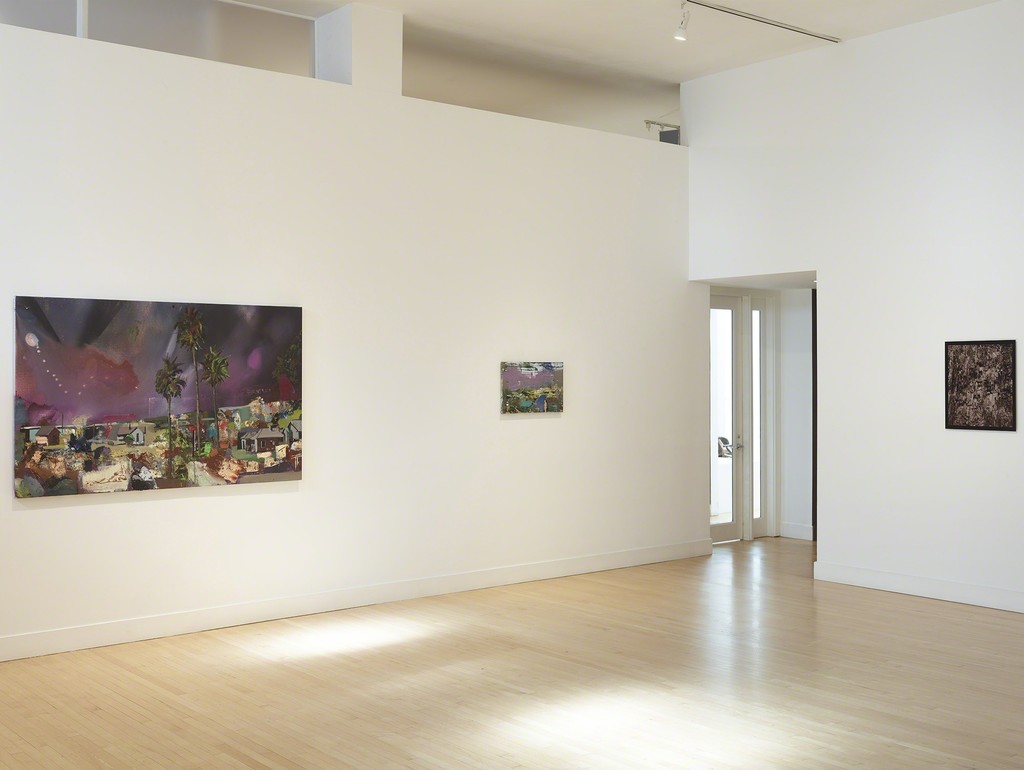 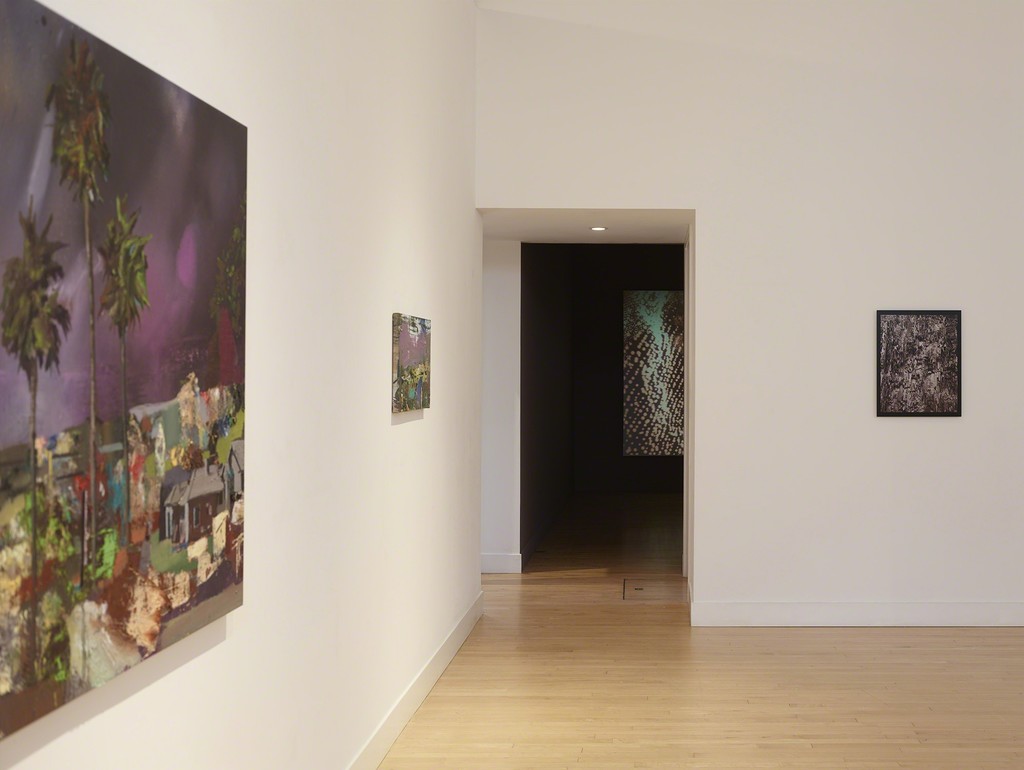 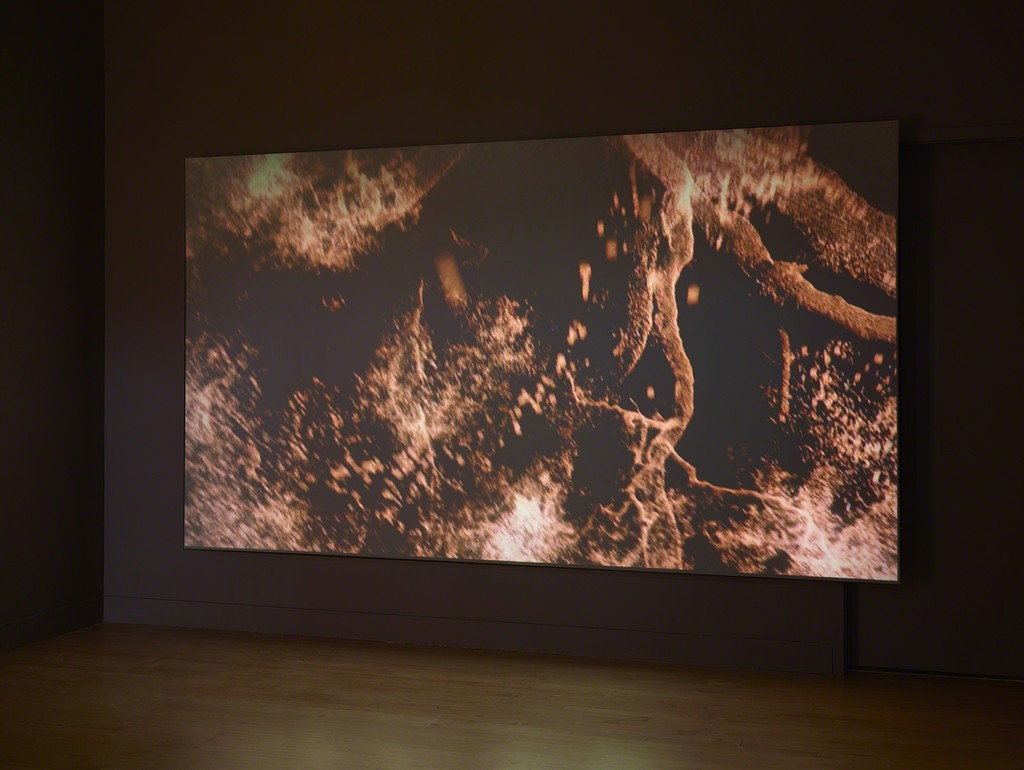 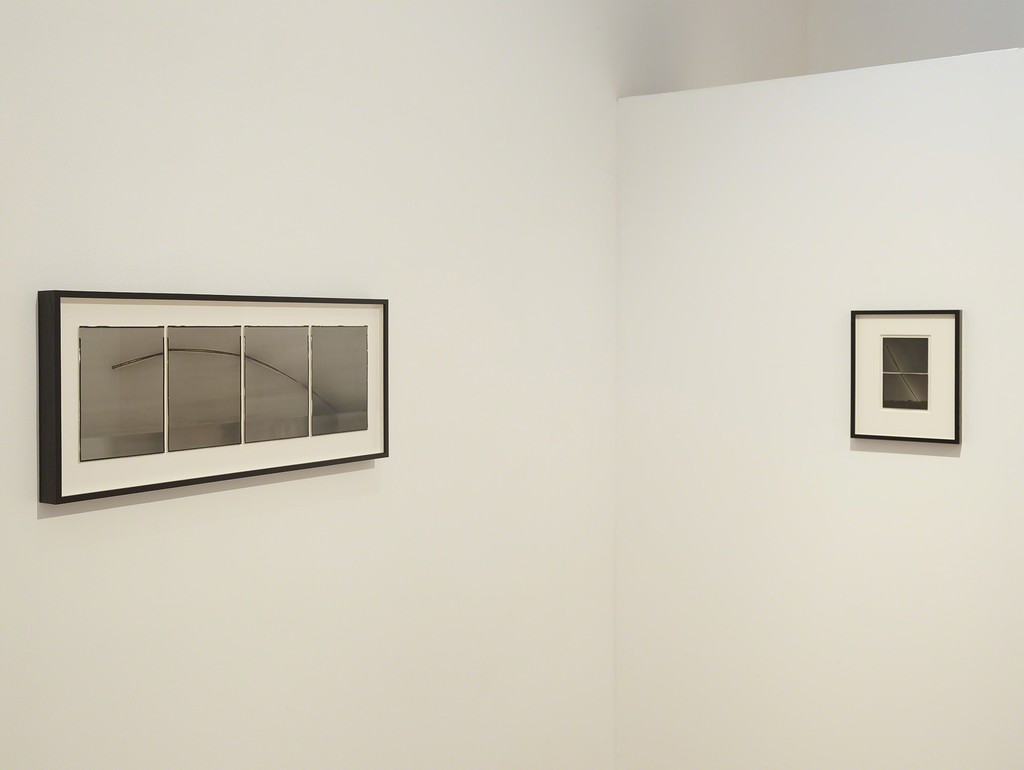 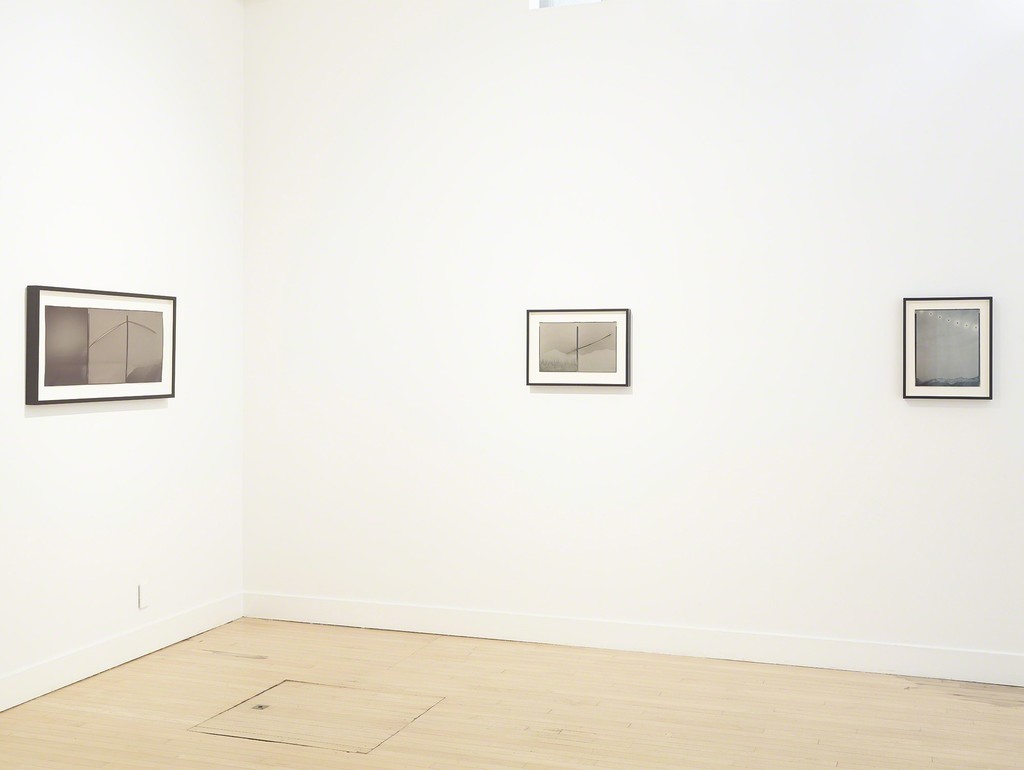 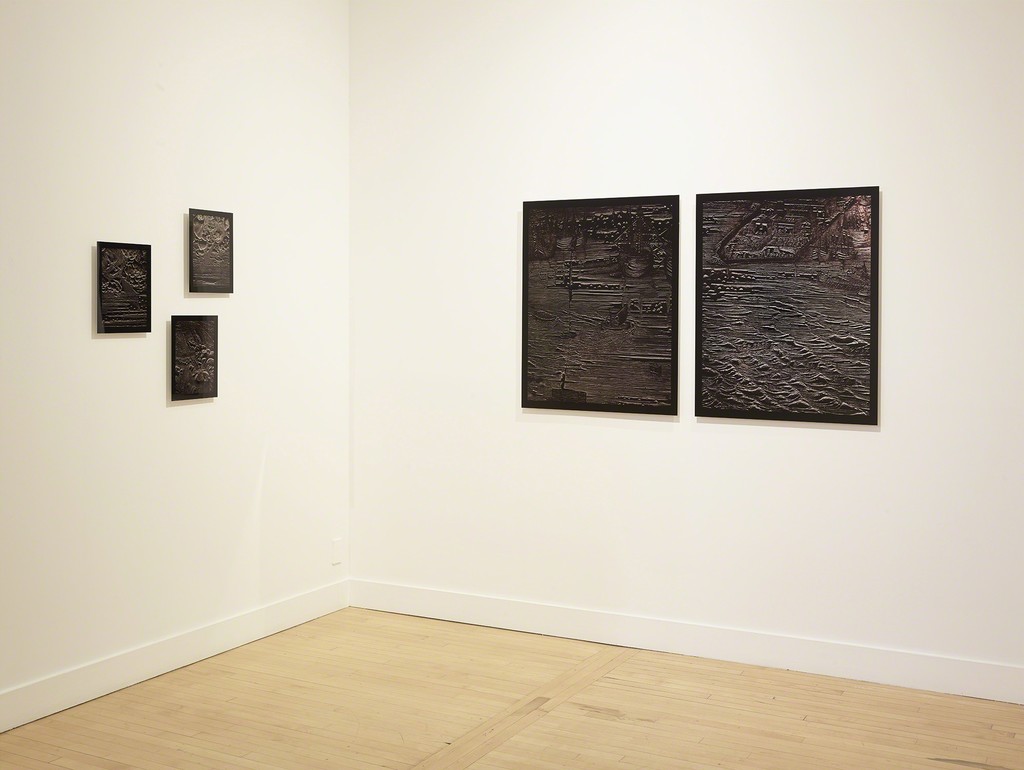 The Mapmaker’s Dream brings together five artist whose works propose inventive and visually compelling ways to map the world around us:

Maurizio Anzeri
(b. 1969; Italian, lives and works in London)
Italian artist Maurizio Anzeri makes his work by sewing directly into found vintage photographs. For The Mapmaker’s Dream, Haines Gallery is debuting On the Lake (2015), a sixteen-piece constellation of embroidered, black-and-white images of landscapes dominated by water. While these crisp photographs often evoke an Alpine lake holiday of boat rides on silvery waters, these peaceful environs are ruptured by Anzeri’s mysterious emanations: angled rays of colored thread that suggest the mapping of recurring, unseen phenomena, such as magnetic fields or paranormal activity.

Marius Bercea
(b. 1979; Romanian; lives and works in Cluj-Napoca)
Romanian painter Marius Bercea creates landscapes that overlay past onto present, fantasy onto memory, and figuration onto abstraction. By merging these disparate elements within his colorful canvases, Bercea maps out a series of highly subjective, psychologically charged spaces. With its trio of palm trees set against a violet sky, his large-scale work Recipe for Tuesday Sunsets (2015) recasts the residential neighborhoods of Los Angeles in an otherworldly spectrum of lush impasto, while two figures, rendered in an entirely different idiom, gesture to one another from the foreground.

Linda Connor
(b. 1944; American, lives and works in San Francisco)
Created during her recent travels in Italy, Linda Connor’s newest photographic works—dark, glistening images printed on aluminum via a process called sublimation—capture details of Jacopo de’ Barbari’s enormous, ink-stained woodblock, Bird’s Eye View of Venice circa 1500, a spectacular achievement of Renaissance printmaking that rendered the streets and canals of the Italian city with extraordinary exactitude. In Connor’s sublimation prints, galleons are seen frozen in the black waters surrounding the island, while a trio of smaller works focuses on the map’s zephyrs, wind-gods with angelic faces whose gales once animated
the scene.

Chris McCaw
(b. 1971; American, lives and works in San Francisco)
In Chris McCaw’s iconic Sunburn series, the lenses in the artist’s handmade cameras function as magnifying glasses, allowing the sun to literally burn its path across light sensitive negatives that are often solarized—a natural reversal of tonality through over-exposure—in the process. The subject of the photograph (the sun) disrupts the idea that a photograph is simply a representation of reality—instead becoming a physical embodiment of the earth’s movement and the passage of time. In pieces such as Sunburned GSP # 837 (Arctic Circle, Alaska), 2015, the horizon line becomes the site on which our own celestial movements are mapped, connecting the viewer to the larger cycles of astronomical time and planetary motion.

Pae White
(b. 1963; American, lives and works in Los Angeles)
Dying Oak/Elephant, Pae White’s 2009 digital animation, uses 3D scanning technology to create what the artist has called “a death mask” for an enormous, 800 year-old California oak tree whose fragility made it impossible to touch. Instead, imaging technology was used to gather information from every surface of the tree. This data was reconstructed as a point cloud—an exquisitely detailed map of sorts—that has been animated to suggests the point-of-view of a dying elephant: looming, slow and erratic. The result is a mesmerizing exploration of natural form in which perspective and scale are in constant flux, the data points coalescing for a moment to create an image that is astonishing in its detail, then suddenly dispersing into abstraction.