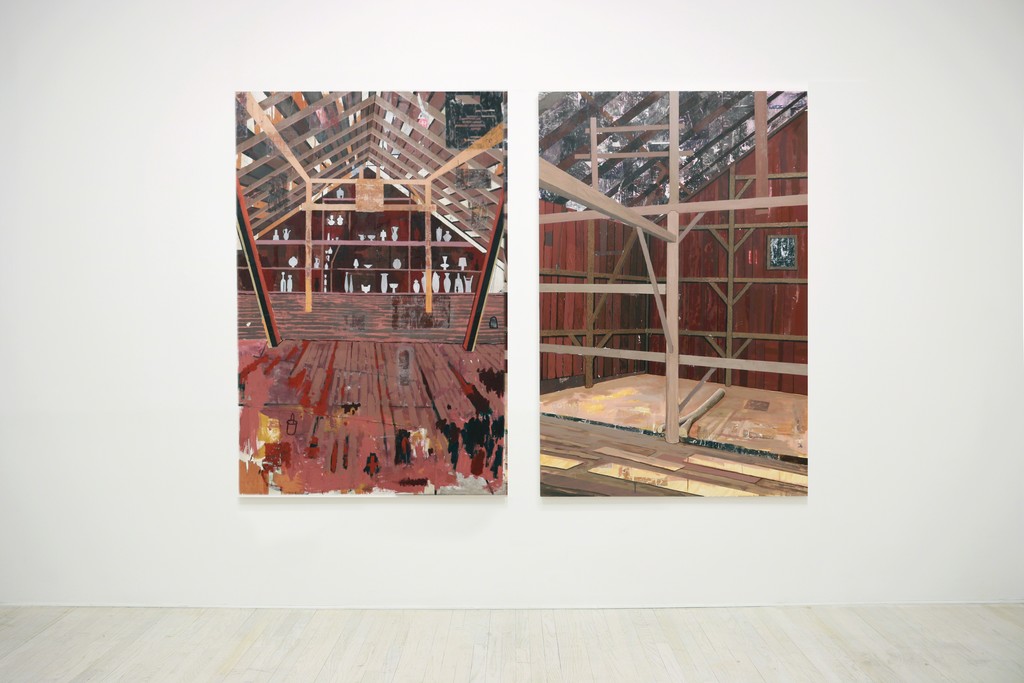 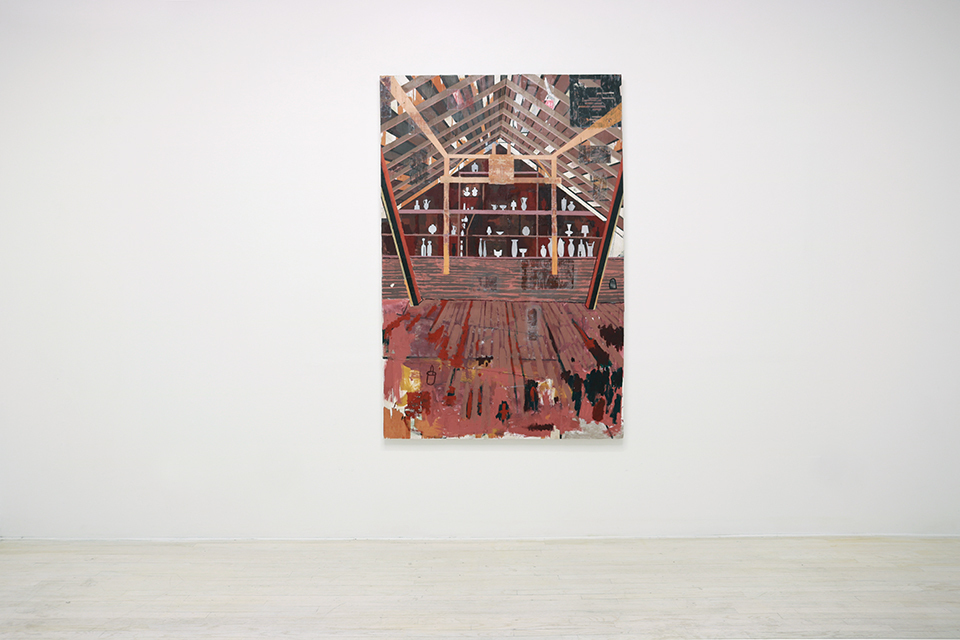 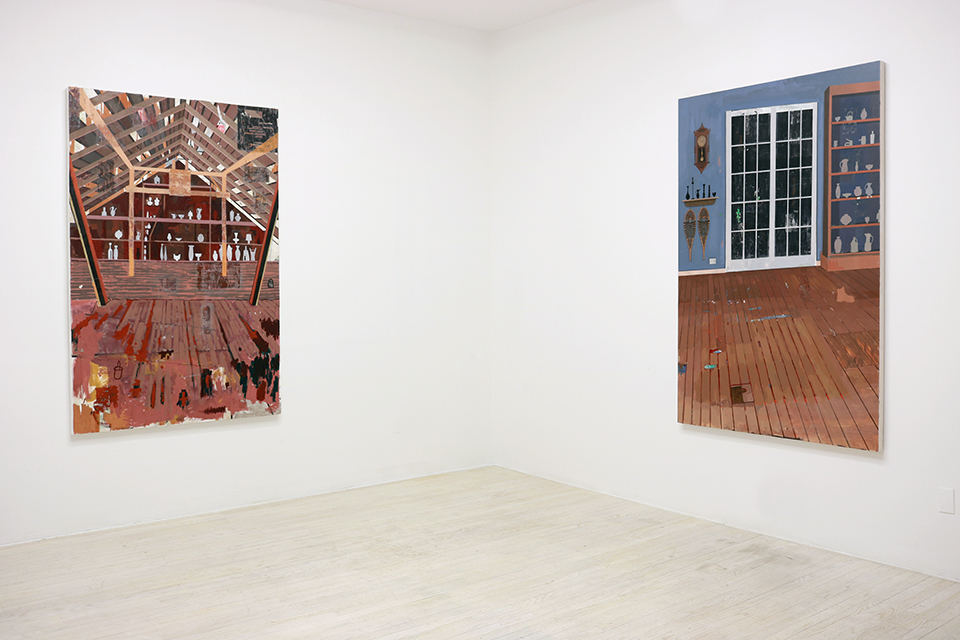 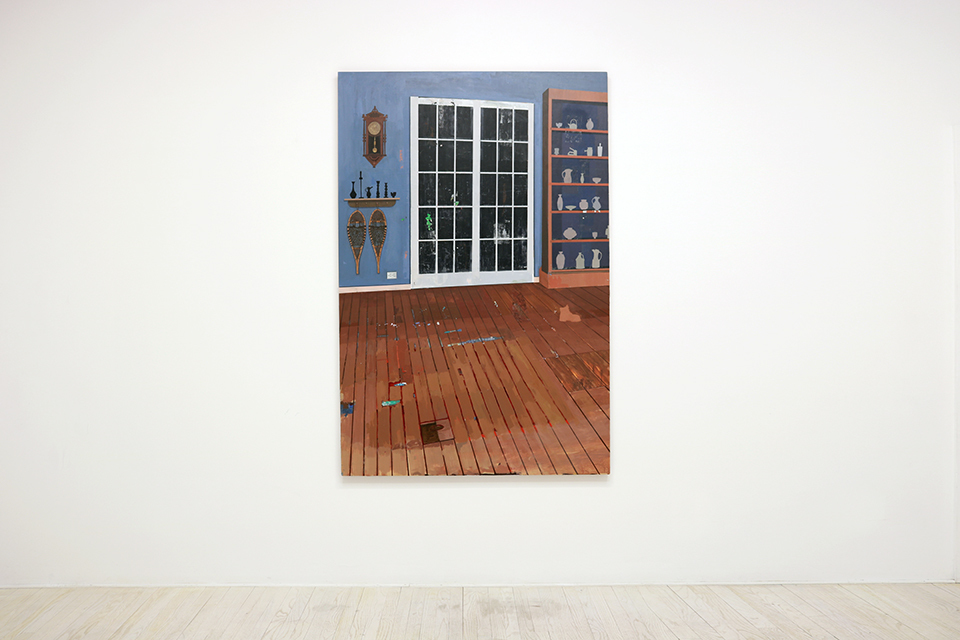 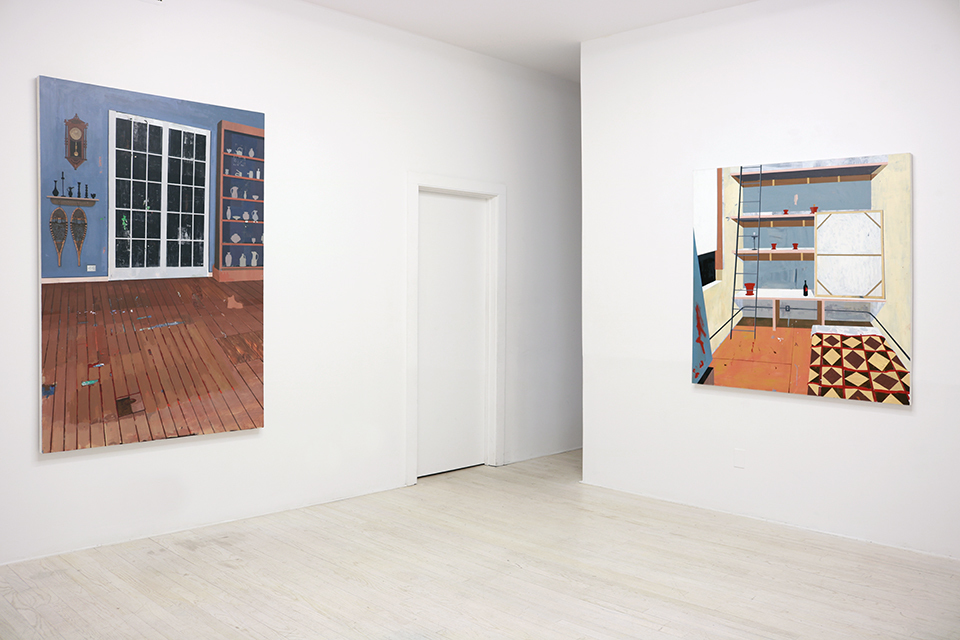 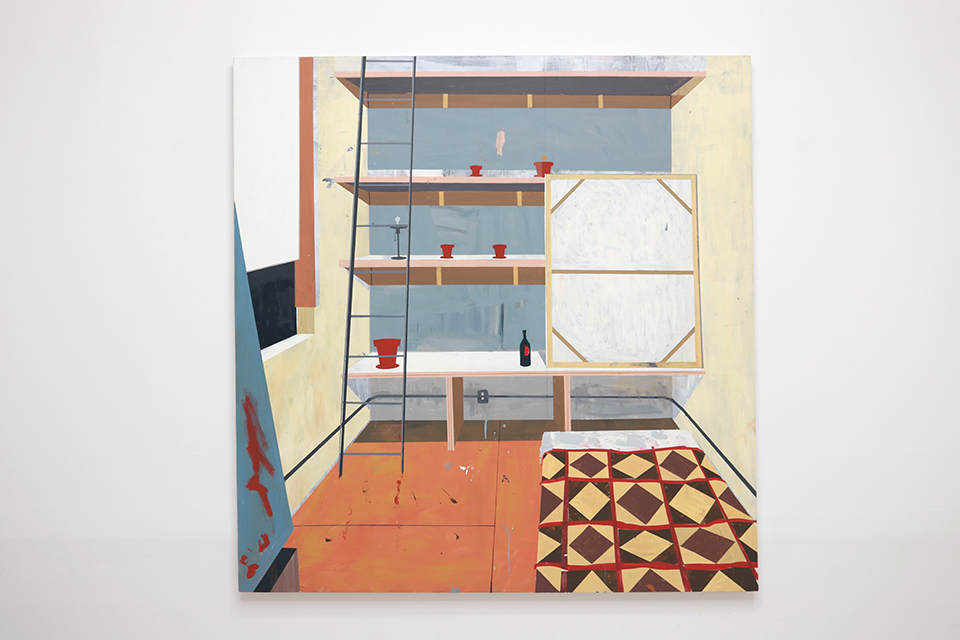 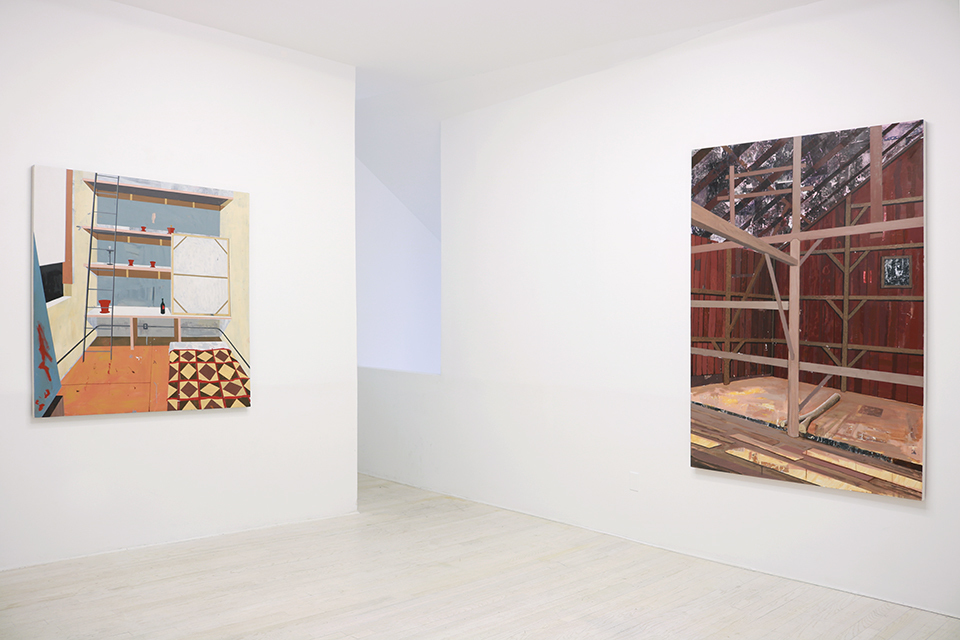 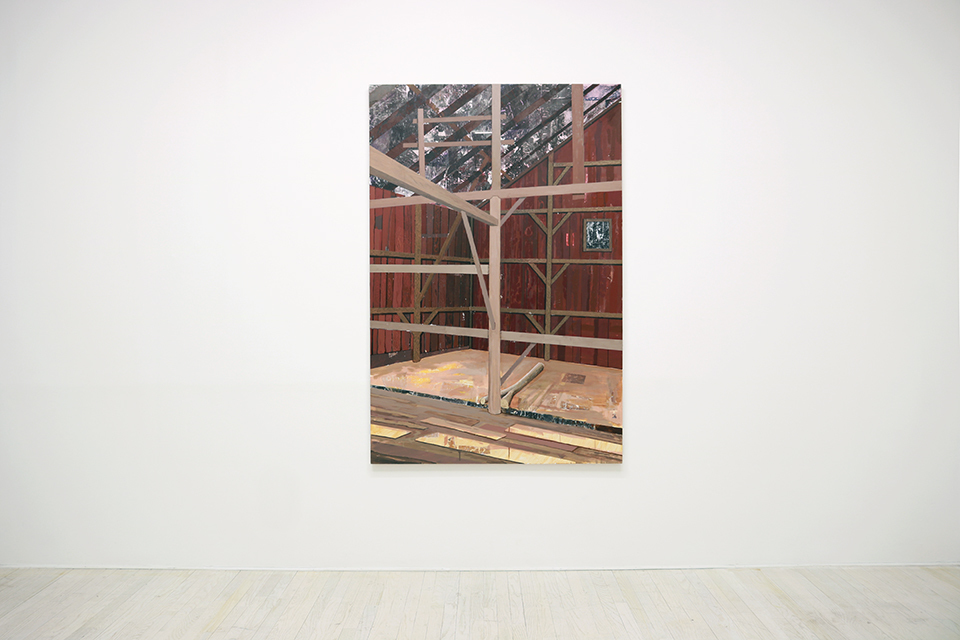 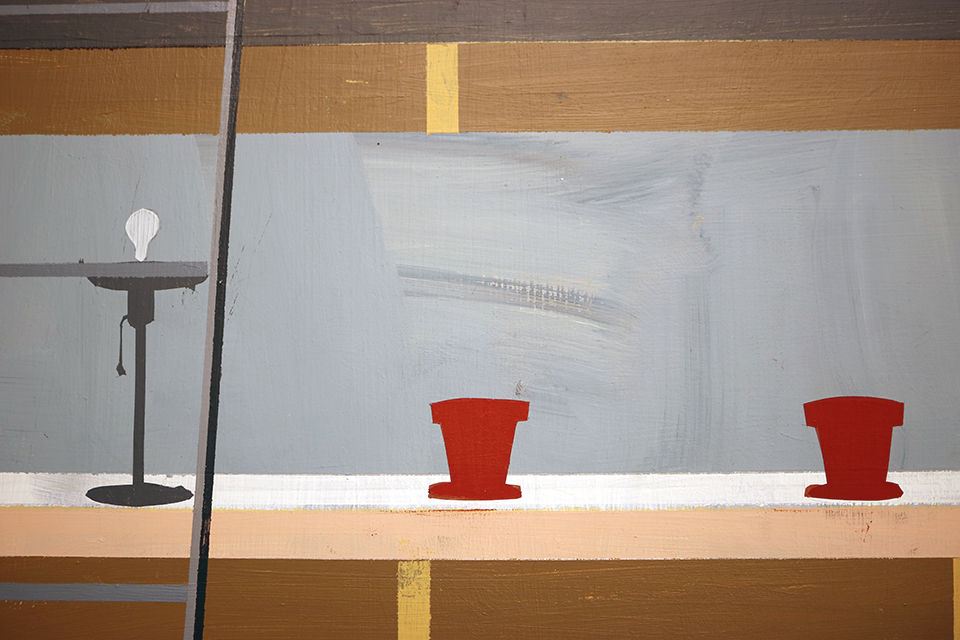 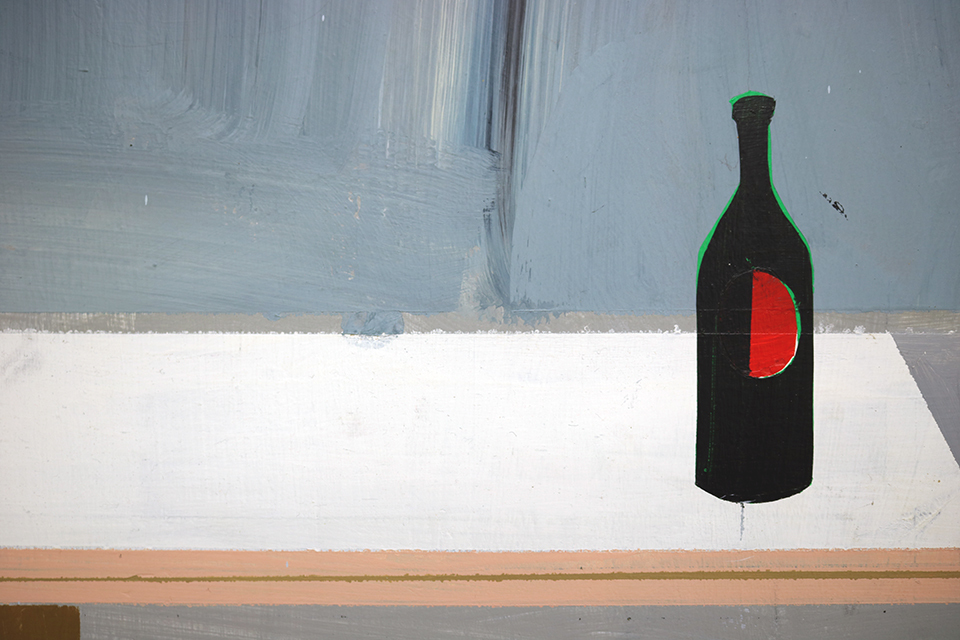 Halsey McKay Gallery is thrilled to present Henry Glavin’s first solo exhibition, Wooden Calendar. The exhibition will be on view by appointment from January 13 – March 24. A closing reception will be held in the spring.

After relocating to Brooklyn from upstate New York, Glavin began a series of vacant rural interior paintings, four of which make up the exhibition. Devoid of human presence, his deft compositions are occupied with rich atmospheres that float in and out of clear spacial logic and depiction. Glavin places poetically specific objects such as snowshoes, a lamp missing its light shade, and a makeshift basketball court, to hint at the psychology of figures out of frame.

In Studio Bedroom, the rendered plywood floors, empty plant pots, rickety ladder, and blank canvas frames leaning on cardboard boxes illustrate a transitional period of a space, as well as of its implied occupant. With a variety of paint handling applications and collage techniques, Glavin creates unique surfaces that engage with the act of painting as much as with imagery. He moves between graphic silhouettes, ink washes, and impasto brushstrokes, creating a range of visual realization that plies the elastic perception of memory.

Henry Glavin was born in New York, NY in 1991. He earned his BFA in Painting and Ceramics from Alfred University where he was granted the Outstanding BFA Thesis Award, The Daniel Joseph Murphy II Memorial Award, the Fred H. Wertz Award for writing and was a Yale Norfolk nominee. Glavin is also the recipient of a St. Botolph Club Foundation Emerging Artist Award. He lives and works in Brooklyn, NY.