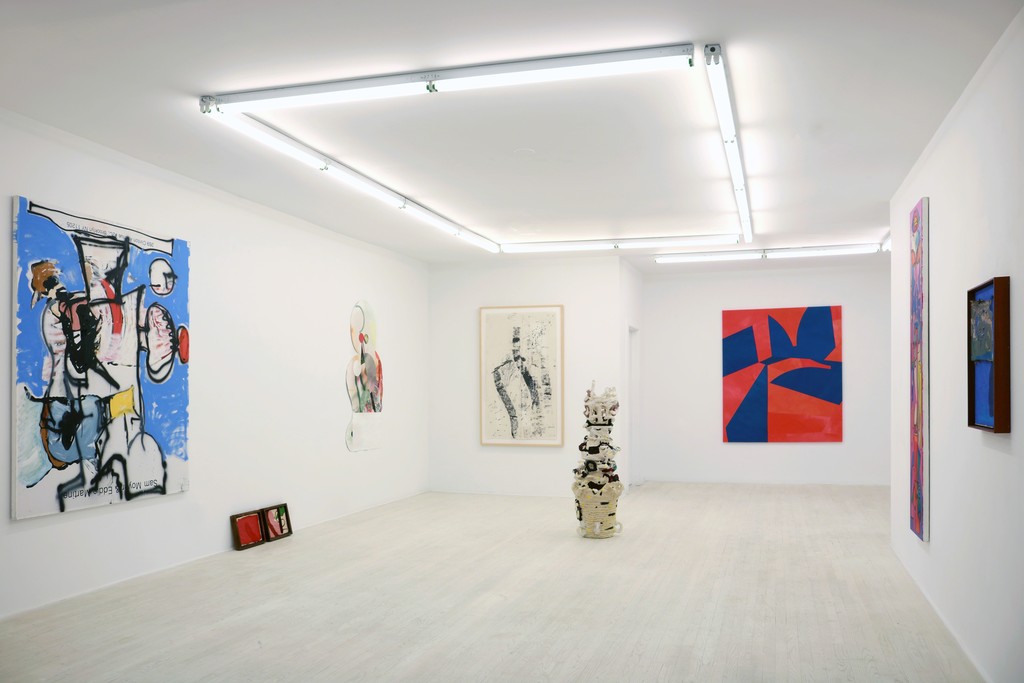 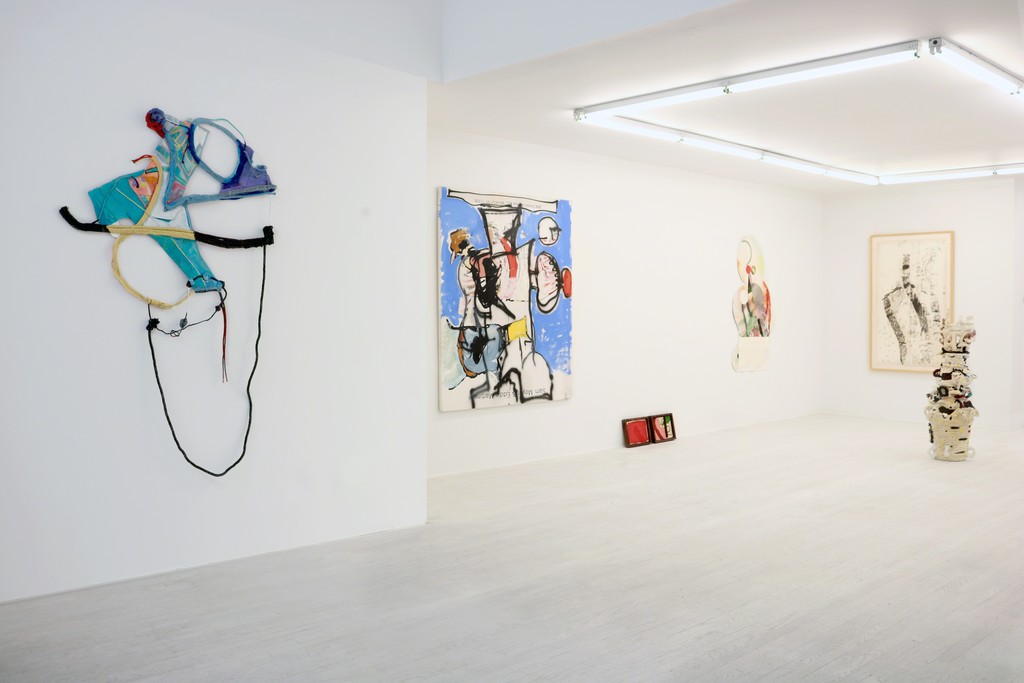 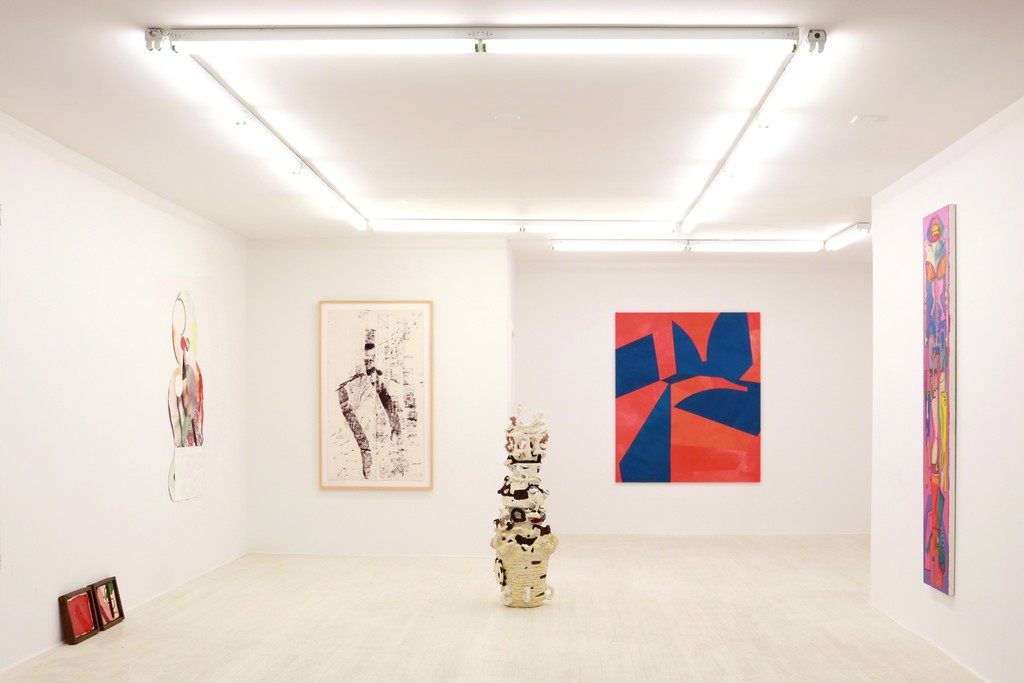 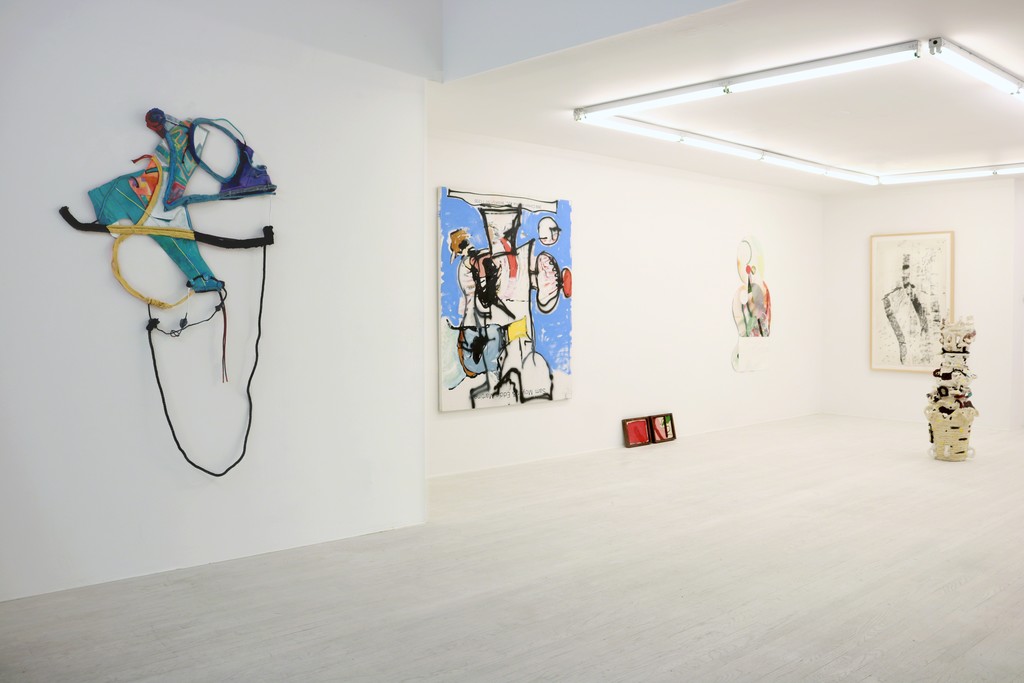 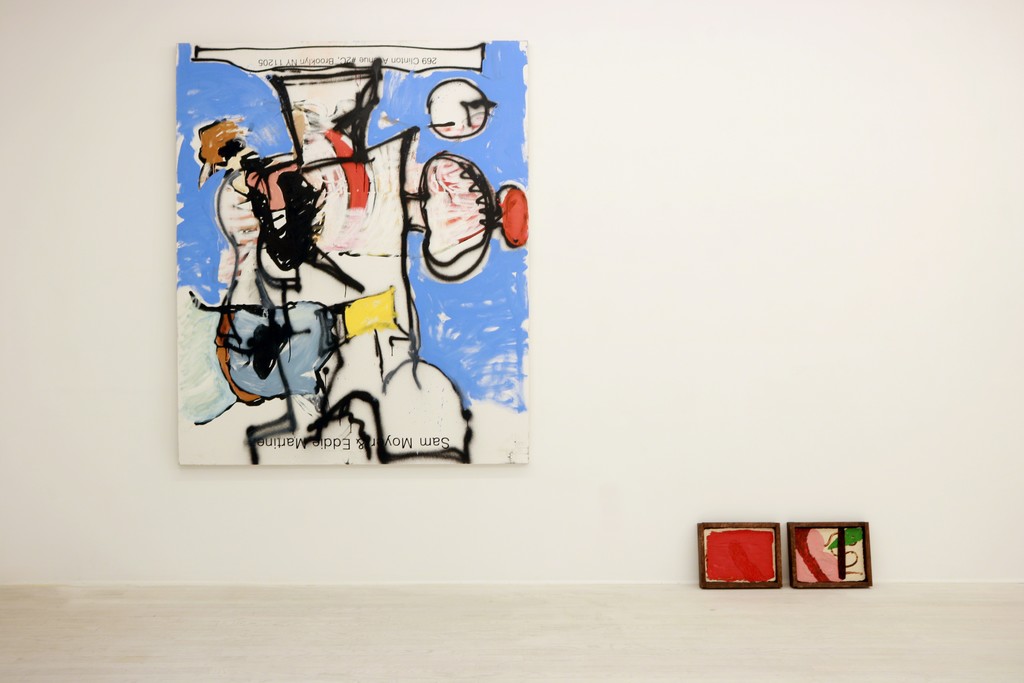 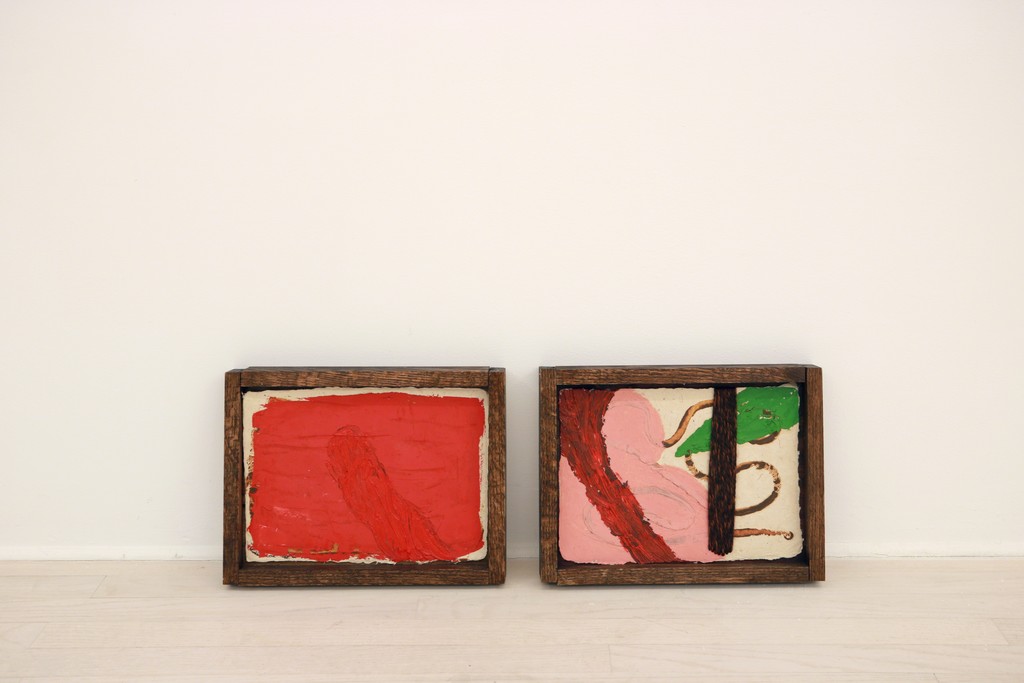 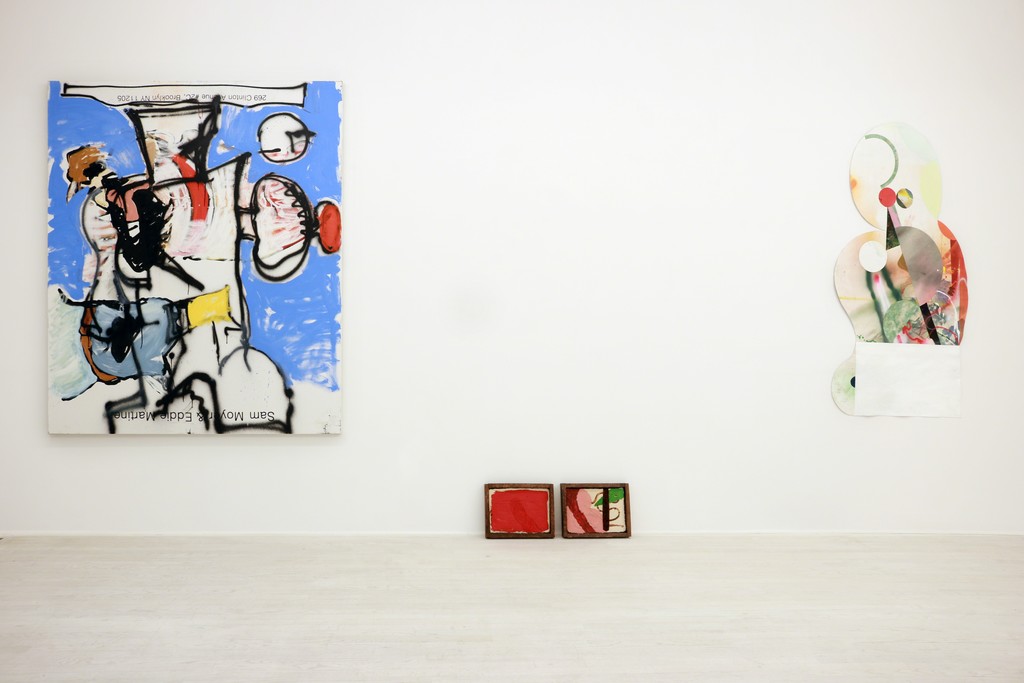 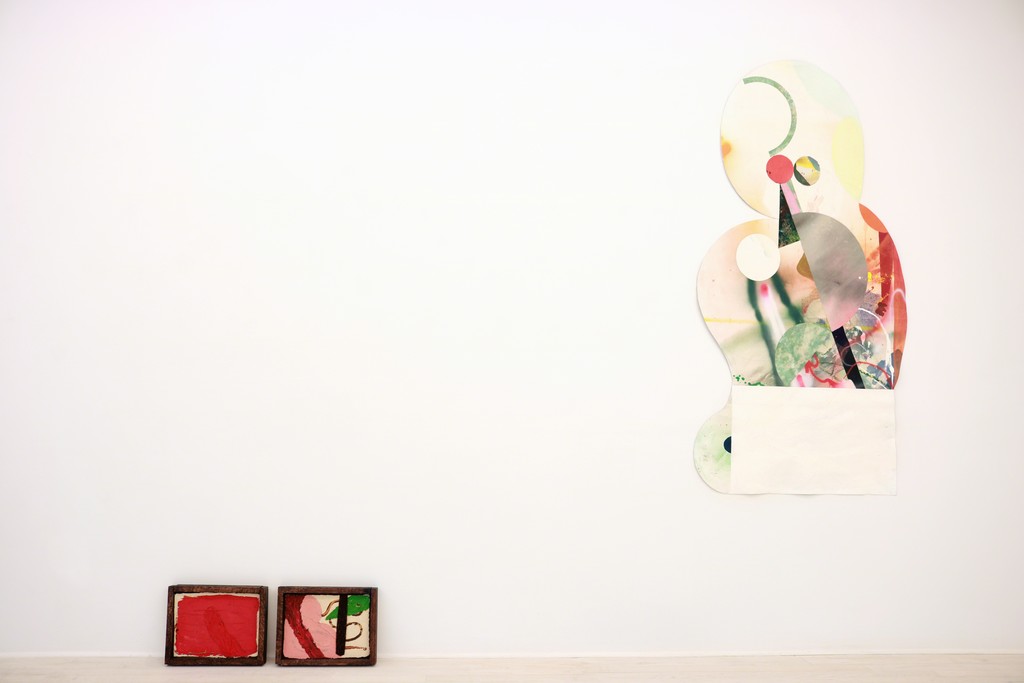 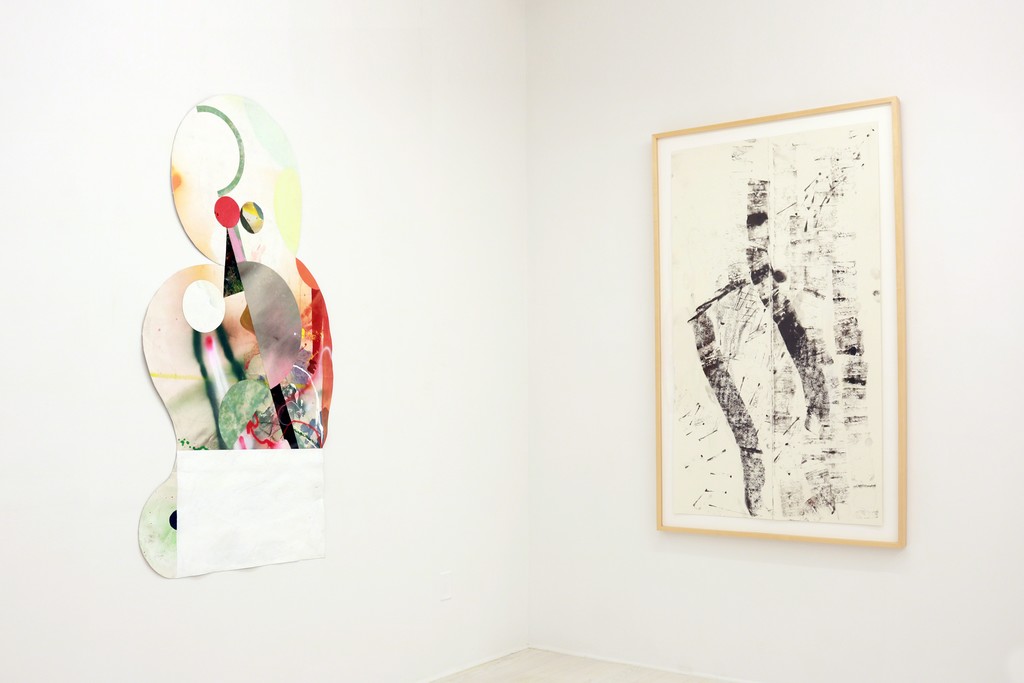 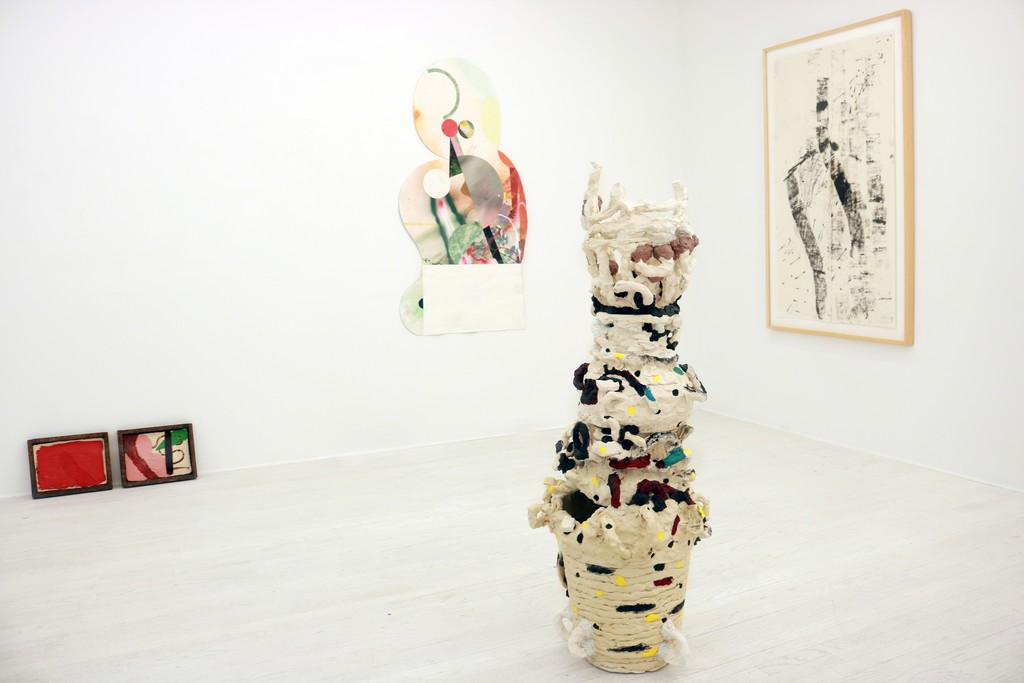 “The spirit of this exhibition surrounds a term that I stumbled upon called Hogarth’s Curve (also referred to as A Line of Beauty) named after William Hogarth, an 18th century English painter and writer. He wrote about beauty and aesthetics, and proposed that in visual art, S-curved lines, or serpentine lines, signify liveliness and action. In contrast, he suggests that straight and parallel lines imply stasis, or death. We can argue against this, but I certainly appreciate the examination of such a fundamental set of marks and their suggestive emotional impact. I’m also willing to connect our attraction to curved forms to some of the essentials: sex, independence and autonomy, the natural world, youthfulness and wild human impulse. These ideas are easy to forget yet remain provocative and we pursue them for our entire lives. The works included in this show weave in out of each other, establishing a sense of formal interconnectedness while maintaining their own tempo, conceptual sovereignty and individualism. Selfishly, they also all teach me things about my own visual predilections: decisions and gestures that show a love for craft, touch and pictorial generosity.

Trisha Brown’s performative drawings operate like maps for uninhibited reaching, while Eddie Martinez’s joyful abstractions become cushions of reassurance for my own anxieties and insecurities. Walter Price’s illustrative vignette paintings allow me to wander into a narrative, invent my way out or stay comfortably lost. Susan Tepper’s figurative paintings are a reminder that turmoil and beauty are built into the paradox of our bodies. Naotaka Hiro’s work also champions the human form as a vessel for scrutiny, and as a tool itself. The tactility and slippage in Beverly Semmes ceramic sculptural stacks with their many grips, urge me to hold and feel the weight. Alvaro Barrington’s paintings nudge into a history, and underscore how procedure and seeing can be the painting. Matt Rich’s shaped paintings on unstretched canvas unapologetically disregard rigid supports, relying on the utility of skin and a charming revolt against right angles–which lead directly into the dynamic contours of Rachel Eulena William’s cut canvas and rope paintings–their edges, intersections and openings snapping at our gaze. We are now primed for the seamed connections and deliberateness in Sarah Crowner’s sewn paintings, thoughtful collisions of sharp and soft, architecture and botanic. The layers of gestural rhythms and ghosts in Matthew Kirk’s paintings circle us back to Trisha Brown’s drawings, feeling more cared for and alive, ready to start looking and learning all over again. Or, we could just hit the beach and watch the waves.”

Trisha Brown (1936-2017) was born and raised in Aberdeen, Washington. She graduated from Mills College in 1958, studied with Anna Halprin and taught at Reed College in Portland before moving to New York City in 1961, where she became a founding member of the Judson Dance Theater. In 1970, she co-founded the dance collective Grand Union and formed the Trisha Brown Dance Company. While best known for her career as an avant-garde dancer and choreographer, with nearly 100 dance works to her credit, Brown consistently sought to integrate the visual arts with her performance practice. Trisha Brown’s estate is represented by Sikkema Jenkins in New York.

Matthew Kirk (b. 1978, Ganado, AZ) lives and works in Queens, NY. A self-taught artist, he has recently had exhibitions at Adams and Ollman, Portland; Intuit: The Center for Intuitive and Outsider Art, Chicago; Louis B. James, NY; Exit Art, New York and Fierman Gallery, New York. His work has been published in The New York Observer, Modern Painters, and The Wall Street Journal, among other publications. Matthew Kirk is represented by Fierman in New York.

Eddie Martinez (b. in 1977 in Groton, CT) lives and works in Brooklyn, New York. He has had solo exhibitions at Timothy Taylor Gallery, London (2014); Kohn Gallery, Los Angeles (2014); Half Gallery, New York (2014); and Journal Gallery, New York (2013). His work has also been exhibited in various group exhibitions at The Saatchi Gallery, London (2013) and Garage Center for Contemporary Culture, Moscow (2011). Additionally, Martinez’s work has been featured in Modern Painters, ARTINFO, The New York Times, ArtReview, The Brooklyn Rail, and Art in America. Eddie Martinez is represented by Mitchell Innes and Nash in New York.

The Journal Gallery, New York (2016). Price is one of this years Artists-in-Residence at the Guild Hall in East Hampton, NY and will be an Artist-in-Residence at the Robert Rauschenberg Foundation, Captiva, Florida in 2018. Walter Price is represented by Karma in New York.

Matt Rich (b. 1976 in Boston, MA) lives and works in San Diego, CA. He received an MFA from the School of the Art Institute of Chicago, a BA from Brown University and attended the Skowhegan School of Painting and Sculpture. Rich’s work has been featured in exhibitions in venues such as Institute of Contemporary Art, Boston; Project Row Houses, Houston; devening projects + editions, Chicago; Samson Projects, Boston; Zevitas/Marcus in Los Angeles; galerie oqbo in Berlin; and BravinLee Programs in New York City. His works are in the permanent collections of List Visual Arts Center at MIT, The Kemper Museum of Contemporary Art in Kansas City, Dana Farber Cancer Institute Art Collection in Boston, and Northeastern University in Boston. His work has been written about in publications including Modern Painters, Artforum, Art Papers, and The Boston Globe among others. Matt Rich is represented by Halsey McKay Gallery.

Beverly Semmes was born in Washington, D.C. and lives and works in New York City. Over the course of her career Semmes has had many solo exhibitions, including exhibitions at the Museum of Contemporary Art, Chicago; Camden Art Centre, London and the Wexner Center for the Arts, Columbus, Ohio. Her work is included in numerous museum collections, including the Albright Knox Art Gallery, the Hirshhorn Museum, the Whitney Museum of American Art, the Denver Art Museum, and the Los Angeles Museum of Contemporary Art. In the spring of 2016 Semmes served as the Arthur L. and Sheila Prensky Island Press Visiting Artist at Washington University in St. Louis. She is represented in New York by Susan Inglett Gallery.

Susan Tepper (1943-1991) a Neo-expressionist figurative painter, explored identity, gender, and societal issues of the late 20th century. In addition to her painting practice, Tepper fostered a community of artists, poets, playwrights, and writers through the East Hampton Center for Contemporary Art, which she founded in 1985. Throughout her life, Tepper was an advocate for social justice through her support of progressive causes of the ‘70s and ‘80s which have particular relevance today. Tepper’s work has been exhibited at Painting Space 122, NYC (1985); E.M. Donahue Gallery, NYC (1989); and the Benton Gallery, Southampton (1989). Most recently, Tepper’s work was exhibited at The Museum at Guild Hall, East Hampton (2015). The Estate of Susan Tepper is represented by Hyphen, an artist management firm founded by Andrea Glimcher.