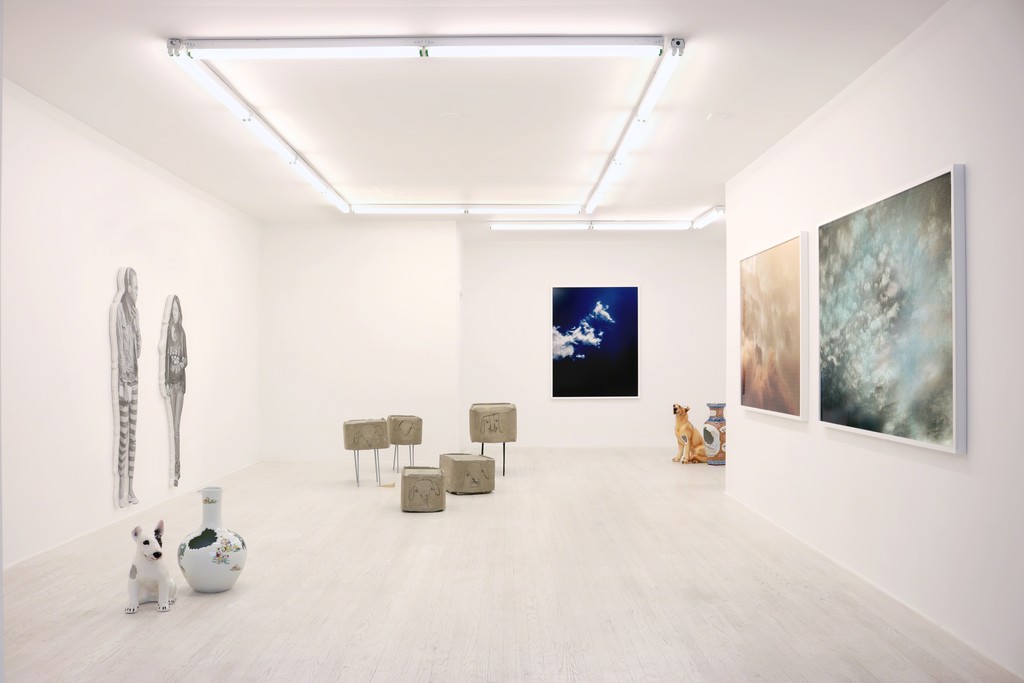 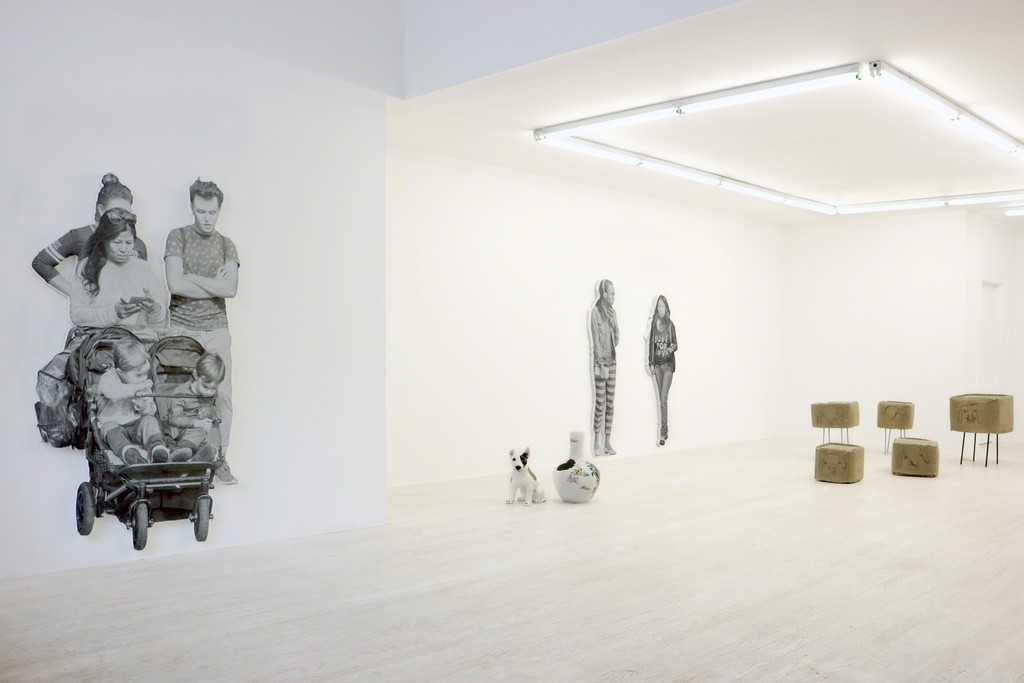 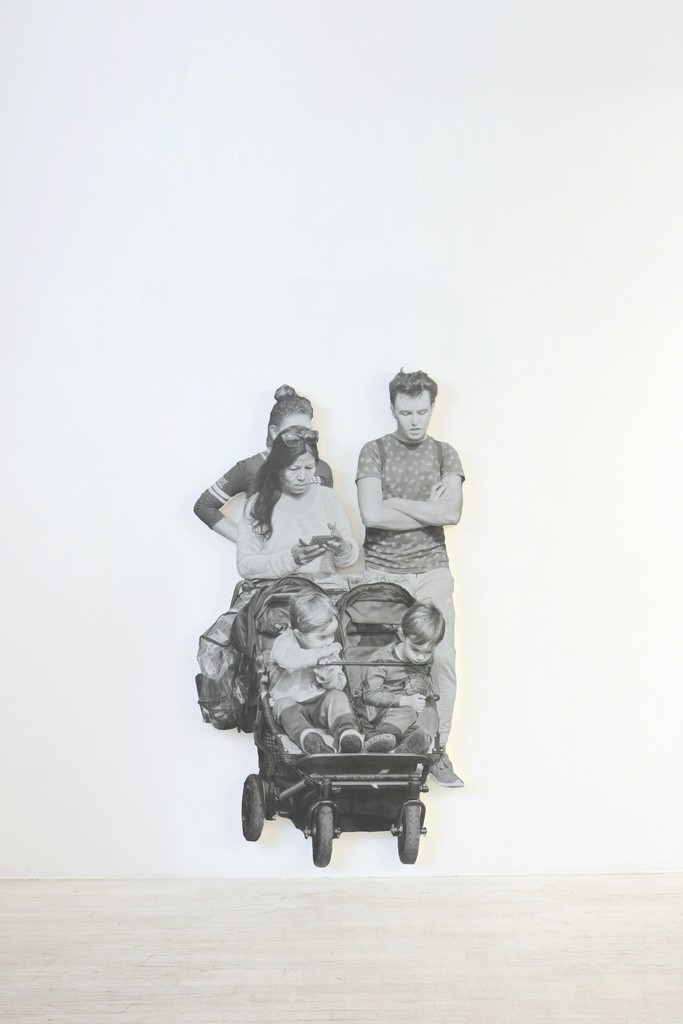 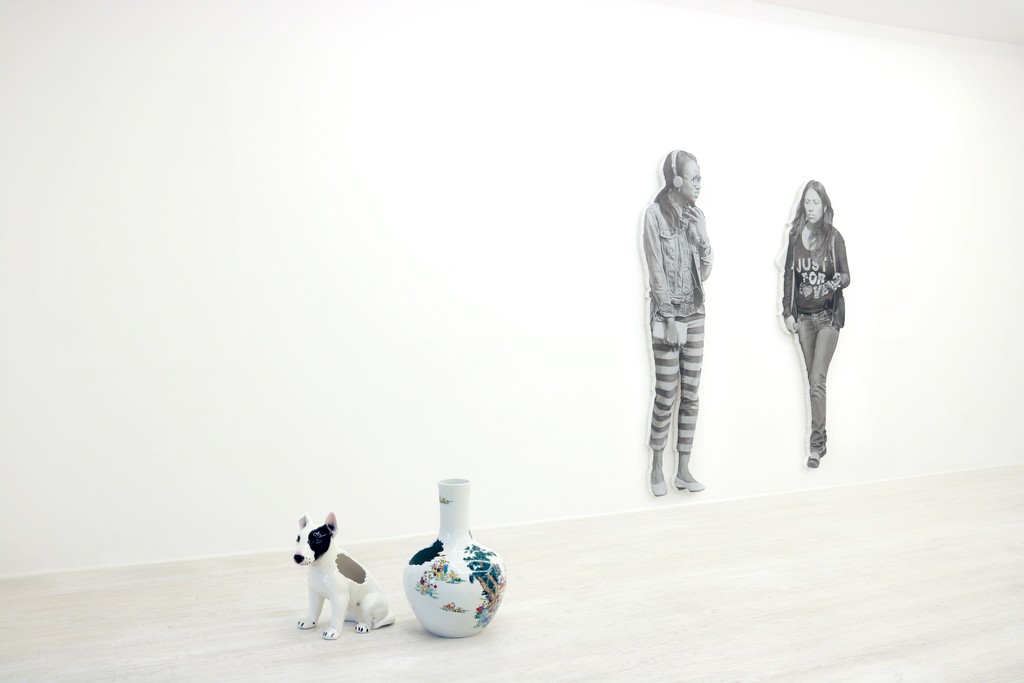 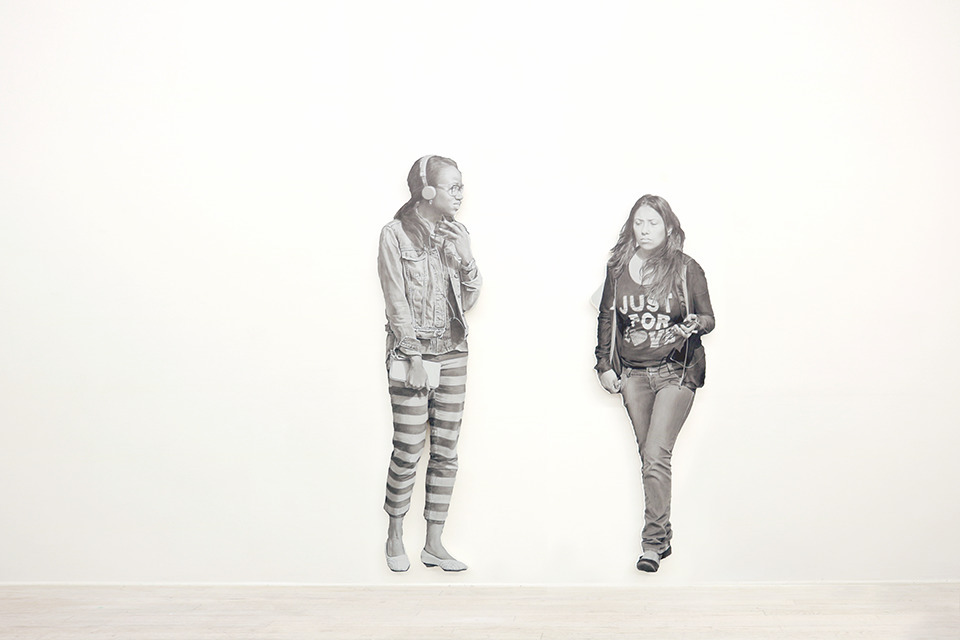 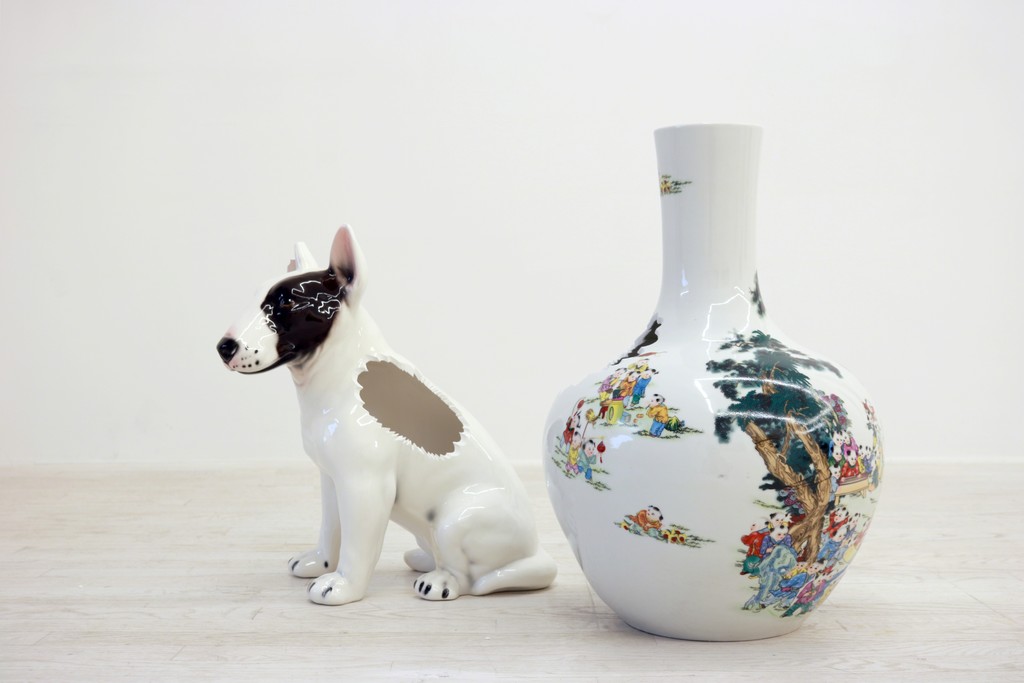 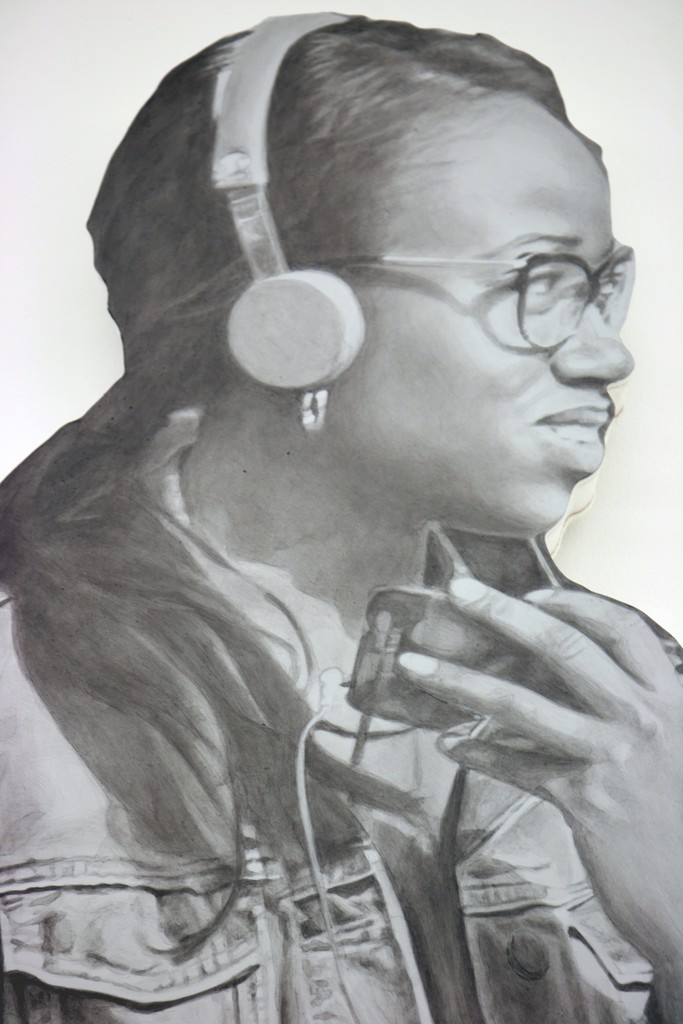 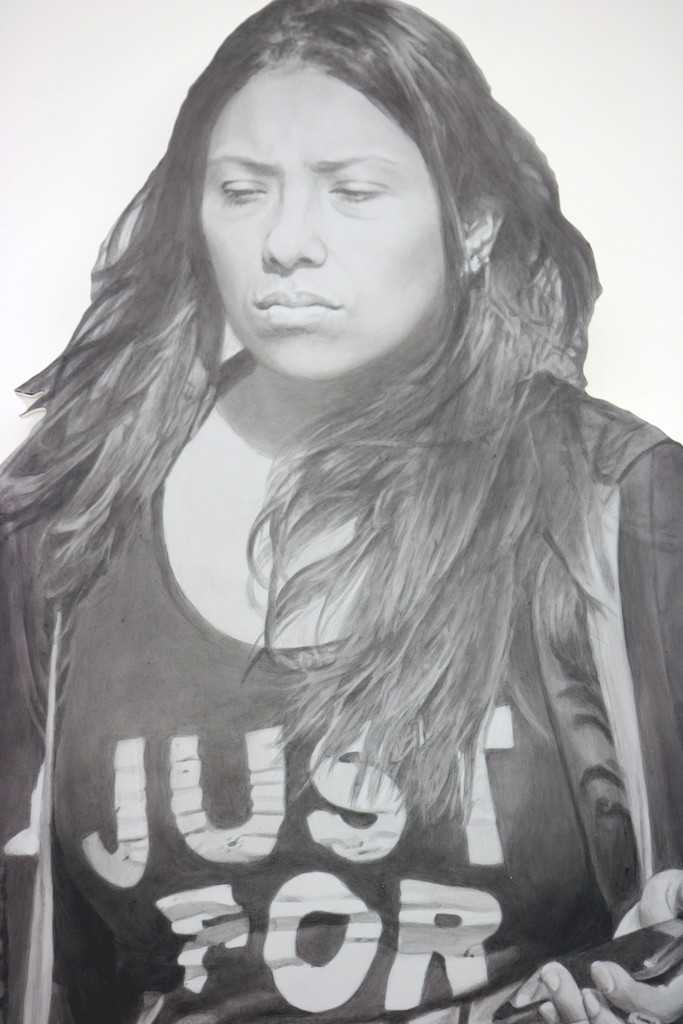 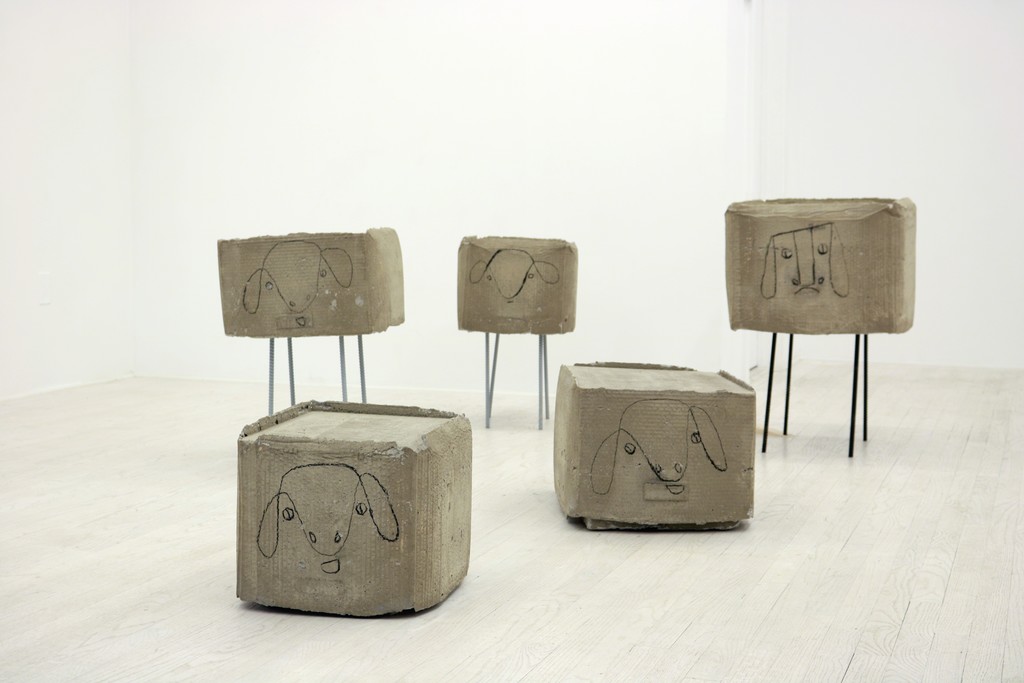 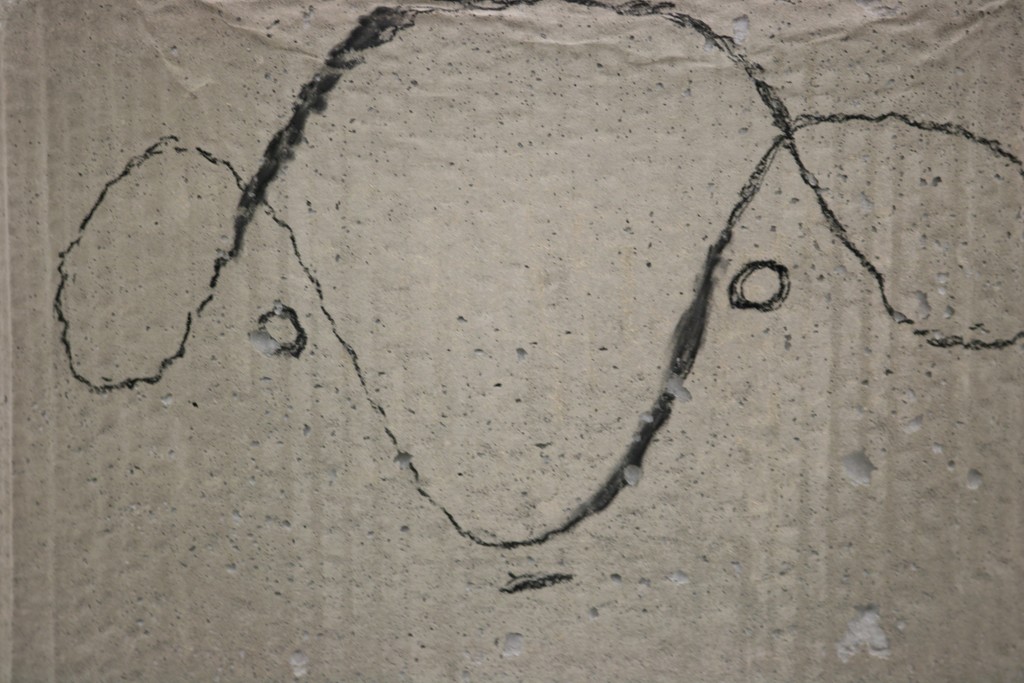 Halsey McKay Gallery is honored to present Nina Beier, Judith Hopf, John Miller and Trevor Paglen in an exhibition curated by Janelle Reiring and Helene Winer of Metro Pictures. Each artist featured is concerned with the politics of art making and the impact of technology on human experience. The works selected for this presentation consider how the line between private and public space is mostly an illusion, as is our perception of individual control.

In her ongoing body of work China, Nina Beier combines found porcelain vases and porcelain dogs together. Beier cuts jagged holes into each, creating a highly artificial effect that mimics a form of cartoon logic, where there is no difference between the abilities of dogs and vases. The aesthetic of ornamentation achieves a new pop criticality as the hole punched into the dog reveals it to be an empty decorative surface, while the vase loses its function as a vessel and flattens into nothing more than pattern. As Beier has stated, “Both of them disclose their empty inner anatomy and somehow meet, in between image and object.”

Judith Hopf’s work focuses on how our social environments shape us, influence us, and by extension exclude us from ourselves. In the installation, Flock of Sheep, Hopf makes a herd of sculptures out of modest concrete cubes cast in cardboard boxes, propped up awkwardly on stilted metal legs. Hopf was inspired to make the work after a trip to the French countryside, where, instead of herds of sheep, the idyllic landscape was punctuated by a concrete nuclear power plant. Adorning the sculptures with “Saul Steinberg-esque” faces, Hopf draws a parallel between the boxy sheep and the way that we ship our belongings in boxes as we happily move around the world—as docile in the global economy as sheep.

John Miller’s work investigates the exchange between art and the everyday – and the absorption of each into the other. Miller’s pedestrian paintings are based on images of people going about their daily routines––from an ongoing photo series he began in 1994, in which he takes a photograph everyday between 12pm and 2pm. These images of unwittingly photographed pedestrians reflect, through their clothing, hairstyle, and other personal articles, what Miller refers to as the “presentation of self” that occurs in public space.

Trevor Paglen’s prints and moving images reveal a proliferating and otherwise imperceptible category of “invisible images” characteristic of computer vision. At first glance, Paglen’s images appear to be simply Turner-esque landscape photographs, depicting the natural beauty of the sky. However, upon closer inspection Paglen’s image of what seems to be a shooting star in the middle of a deep blue sky suddenly reveals itself as a satellite. Two others have been overlaid with geometric shapes and symbols, juxtaposing artifice with nature and inviting the viewer to see the images as a machine does.

Nina Beier was born in 1975 in Aarhus, Denmark, and lives and works in Berlin. Beier has had one- person exhibitions at the Kunstverein in Hamburg; David Roberts Art Foundation, London; Objectif Exhibitions, Antwerp; Kunsthaus Glarus, Switzerland; Nottingham Contemporary, United Kingdom; Mostyn, Llandudno, United Kingdom; Kunsthal Charlottenborg, Copenhagen; and the Yerba Buena Center for the Arts, San Francisco. Her work has been included in group exhibitions at the Walker Art Center, Minneapolis; Centre Pompidou, Paris; Tate Modern, London; CCA Wattis, San Francisco; Musée d’Art Moderne, Paris; KW Institute for Contemporary Art, Berlin; Artists Institute, New York; Fondazione Sandretto Re Rebaudengo, Turin; Swiss Institute, New York; and the Power Station, Shanghai. Her performance-installation Anti-ageing was commissioned by Performa 15 and later staged as part of ICA London’s Art Night in 2016. She has been awarded the Prize of the Böttcher- straße, and her work was included in 13th Biennale de Lyon and the 20th Biennale of Sydney.

Judith Hopf was born in 1969 in Karlsruhe, Germany, and lives and works in Berlin. She is
Professor and Vice-Rector of Fine Arts at the influential Städelschule art academy in Frankfurt. Coming to prominence among a generation of artists working in Berlin in the 1990s, she famously arranged a series of salons with fellow artists and other creative producers at b_books, a well-known bookstore in the Kreuzberg district of the city. She has had one-person shows at Statens Museum for Kunst, Copenhagen; KW Institute for Contemporary Art, Berlin; the Hammer Museum, Los Angeles; Museion, Bolzano, Italy; Neue Galerie, Kassel; Maumaus, Lisbon; PRAXES Center for Contemporary Art, Berlin; Malmö Konsthal, Sweden; Studio Voltaire, London; and Badischer Kunstverein, Karlsruhe. She has also participated in Documenta XIII, La Biennale de Montréal, and the Liverpool Biennial.

John Miller was born in 1954 in Cleveland, Ohio, and lives and works in New York and Berlin. Along with Mike Kelley and Jim Shaw, Miller was part of an influential group of artists who studied at CalArts in the 1970s. In 2016, the Institute of Contemporary Art, Miami, presented the first major American survey of his work. Miller has also had one-person exhibitions at Museum Ludwig, Cologne; Kunst- halle Zürich; Musée d’art moderne et contemporain, Geneva; Magasin Centre National d’Art Contemporain, Grenoble, France; and Kunstverein Hamburg. He has participated in major group exhibitions at the New Museum, New York; CAPC Musée D’Art Contemporain, Bordeaux; Museo Reina Sofía, Madrid; and MoMA PS1, New York. His work was included in the 1991 Whitney Biennial and the 2010 Gwangju Biennale. His writing and criticism have appeared in Artforum, e-flux, and Texte Zur Kunst and has been compiled in the publications The Price Club: Selected Writings, 1977-1996 (JRP Editions and the Consortium, 2000) and The Ruin of Exchange (Geneva and Dijon: JRP-Ringier and les Presses du Reel, 2012).

Trevor Paglen was born in 1974 in Camp Springs, Maryland, and lives and works in Berlin. A mid-career survey exhibition, Sights Unsee, is on view at the Smithsonian American Art Museum, Washington, D.C., from June 21, 2018, to January 6, 2019, accompanied by a fully illustrated catalog. He has an additional one-person exhibition on view at Museo Tamayo, Mexico City, from June 28 to September 30, 2018. Further one-person shows have been held at the Nevada Museum of Art, Reno; Secession, Vienna; Berkeley Art Museum; Kunsthall Oslo; and Kunsthalle Giessen, Germany. His work has been included in group exhibitions at the Metropolitan Museum of Art, New York; Tate Modern, London; San Francisco Museum of Modern Art; BALTIC Centre for Contem- porary Art, Gateshead, United Kingdom; Museo Reina Sofia, Madrid; MIT List Visual Arts Center, Cambridge, Massachusetts; Haus der Kunst, Munich; and Walker Art Center, Minneapolis. He partici- pated in the 2009 Istanbul Biennial; 2012 Liverpool Biennial; 2013 ICP Triennial, New York; and the 11th Gwangju Biennale. He has received numerous awards, including a 2017 MacArthur Fellowship, the 2014 Electronic Frontier Foundation Pioneer Award for his contributions to counter-surveillance, and the 2016 Deutsche Börse Photography Foundation Prize. His authored publications include The Last Pictures (New York: Creative Time Books; Berkeley: University of California Press, 2012), a critical compendium of his Creative Time project to launch an ultra-archival disc, micro-etched with one hundred photographs, into orbit around the Earth for billions of years; Blank Spots on the Map: The Dark Geography of the Pentagon’s Secret World (New York: Penguin Publishers, 2009); and I Could Tell You but Then You Would Have to Be Destroyed by Me: Emblems from the Pentagons Black World (Brooklyn: Melville House Publishing, 2007). Phaidon published the artist’s first complete monograph in 2018.
Metro Pictures was founded in 1980 by Janelle Reiring, formerly of Leo Castelli Gallery, and Helene Winer, formerly of Artists Space, at 169 Mercer Street in New York. The gallery’s inaugural exhibi- tions featured artists such as Cindy Sherman, Robert Longo, Troy Brauntuch, Jack Goldstein, Louise Lawler, Sherrie Levine, James Welling, Richard Prince, and Walter Robinson—artists who would later be identified by critics and historians as Pictures artists. Many of them were prominently included in the Metropolitan Museum of Art’s 2009 exhibition “The Pictures Generation.” Later, the gallery pre- sented the first New York exhibitions of Mike Kelley, Jim Shaw, Gary Simmons, John Miller, and Tony Oursler, all of whom elaborated ideas proposed by the California conceptual artists with whom they had studied at CalArts. In 1983 the gallery relocated to 150 Greene Street. During this period René Daniëls and Martin Kippenberger had their first exhibitions outside of Europe at the gallery. Metro Pictures moved to its present location in Chelsea in 1997 and in 2016 1100 Architects renovated the gallery with an award-winning new design.