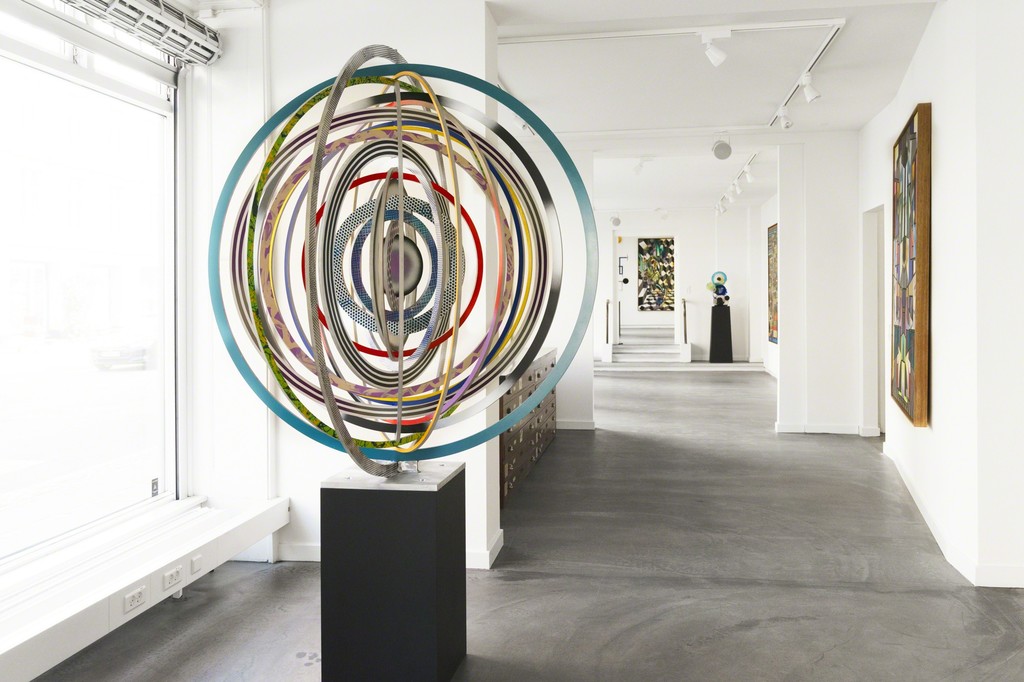 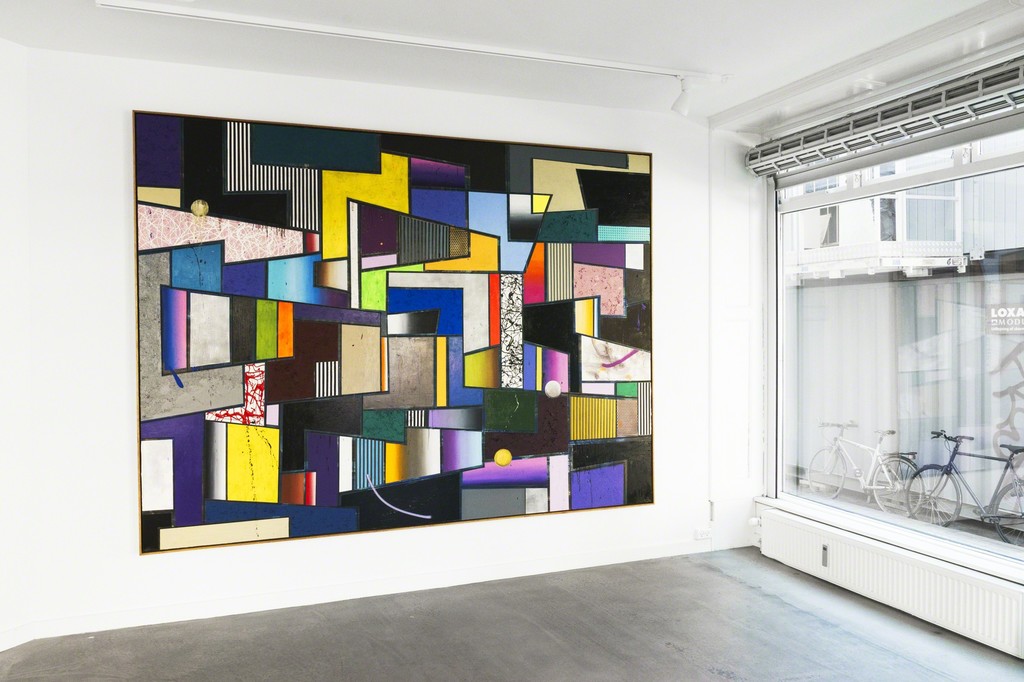 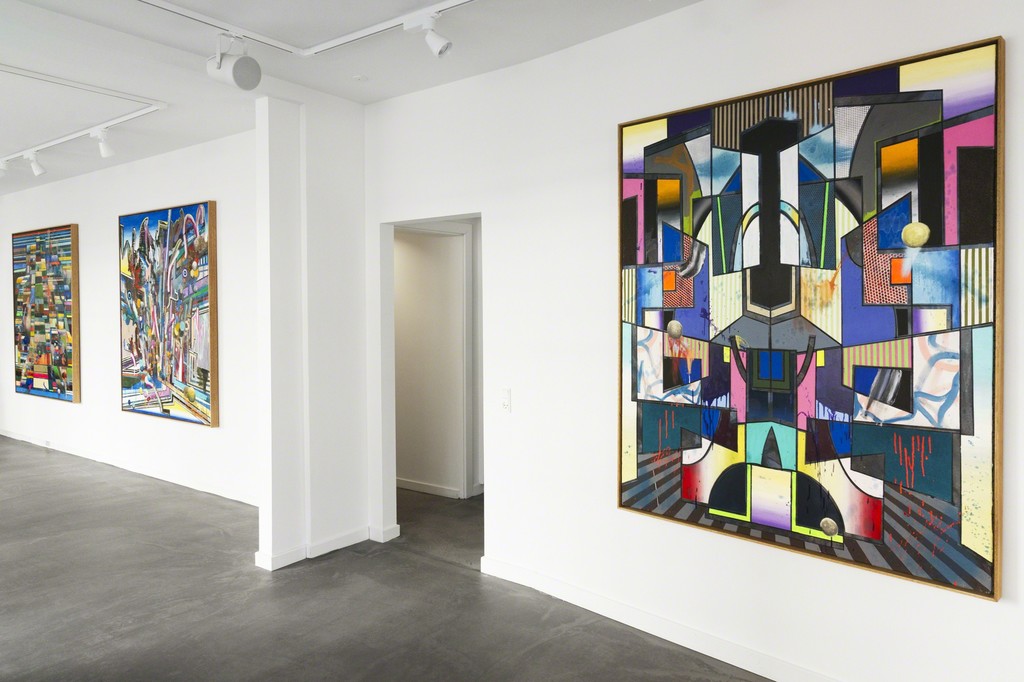 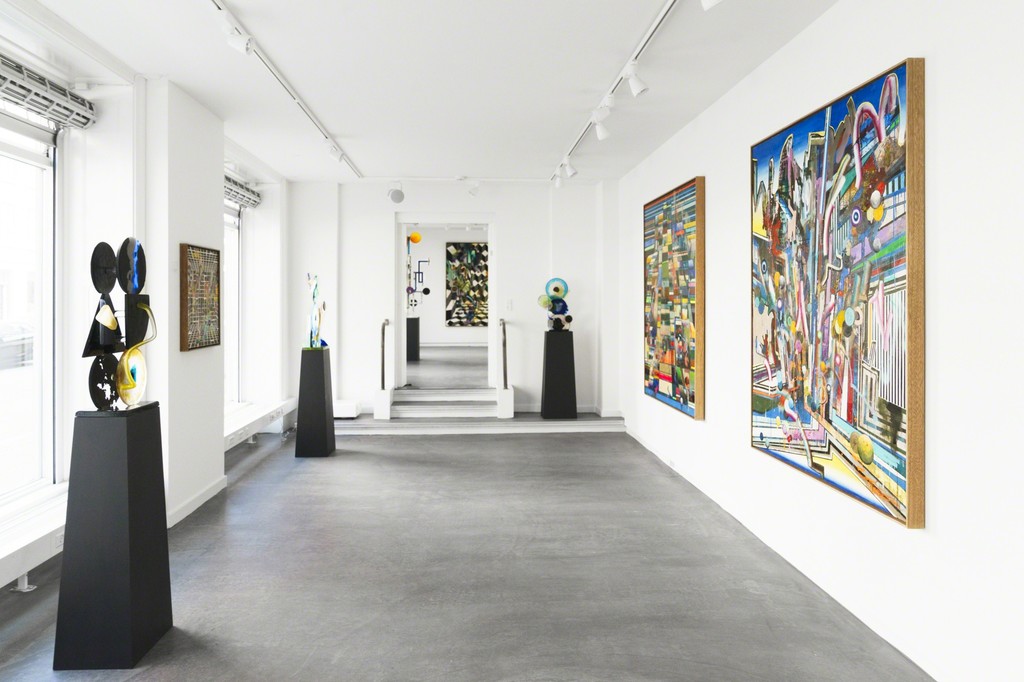 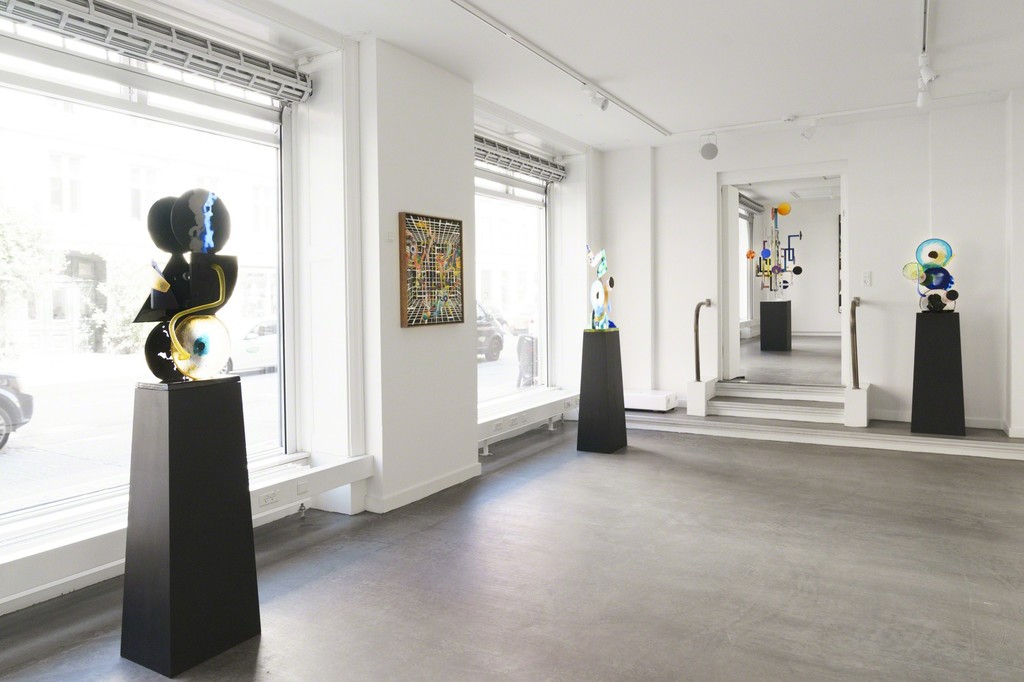 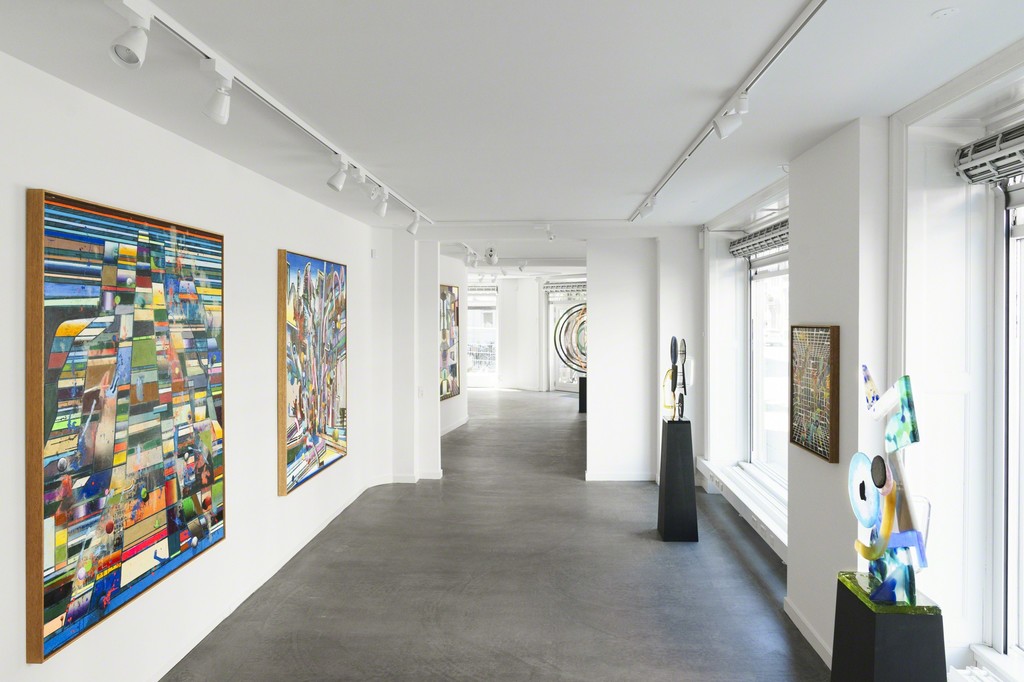 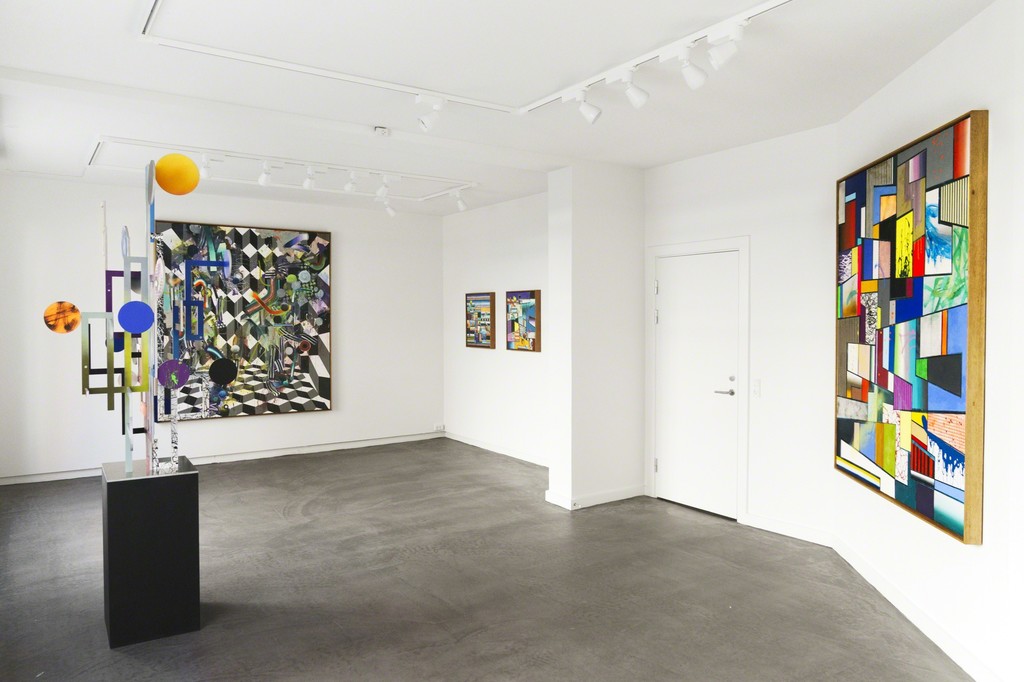 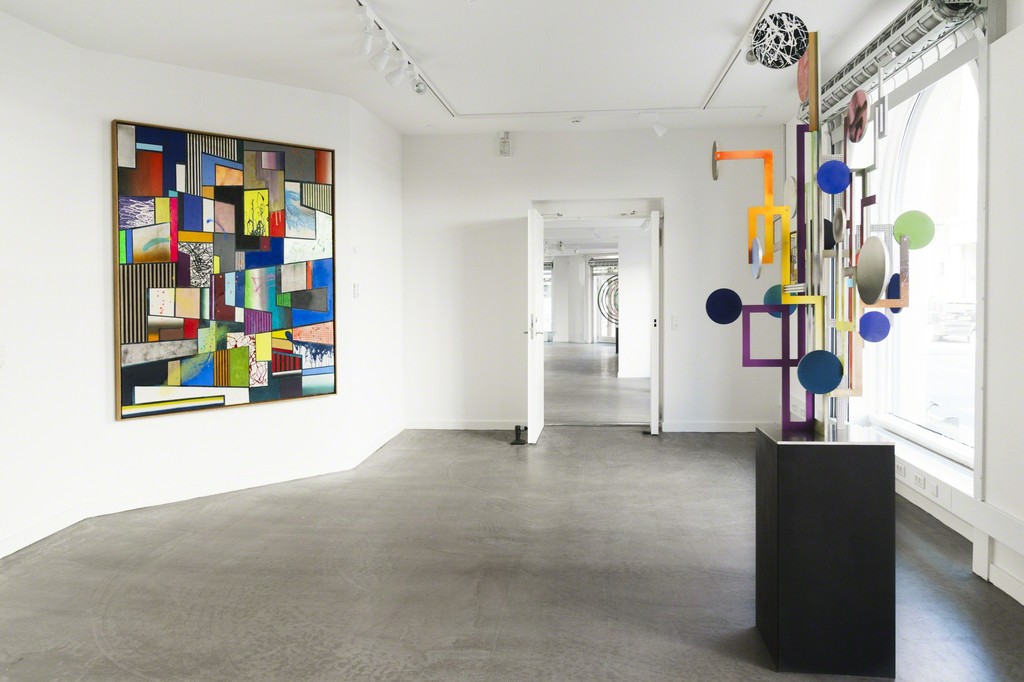 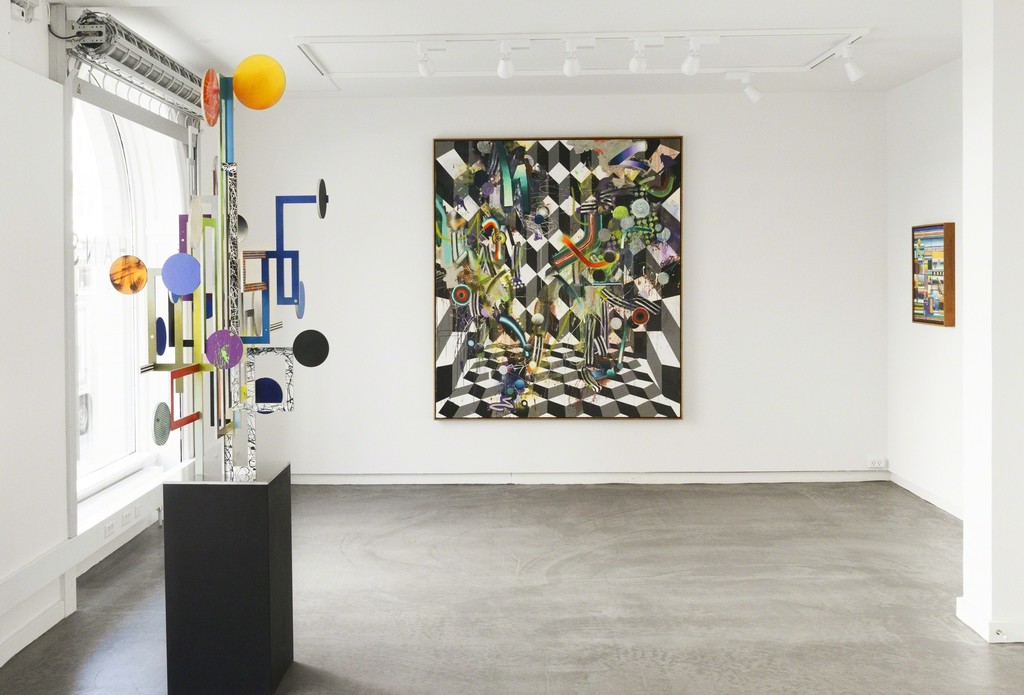 Thursday May 24, we invite everyone to join the opening of Christian Achenbach's new exhibition "Kaleidoscope".

After nearly a decade with now defunct LARM Gallery, German painter and sculptor extraordinaire, Christian Achenbach, joined the Hans Alf Gallery team in the fall of 2017. On the occasion of his first solo exhibition with us, we asked Berlin-based curator, Philipp Bollmann, to give us his thoughts on Achenbach's practice in general and Kaleidoscope in particular:

A kaleidoscope is an optical toy shaped like a telescope. The turning of the tube causes the colored glass pieces to go into motion, producing an infinite number of geometric shapes and patterns. The etymology of the word derives from Greek ' καλός ( kalós , “beautiful”), εἶδος ( eîdos , “shape”) ‘ and σκοπέω ( skopeō , "to look to, to examine”), thus the word alludes to “[the] observation of beautiful forms.”

The title of the exhibition can be seen as somewhat tongue-in-cheek, as it is widely considered a faux pas within the community of visual arts to employ any linguistic references pertaining to the notion of beauty; let alone to have such thoughts or even pass judgement in such a category. Achenbach does not shy away from being ironic towards his art, yet there is no doubt that he has certainly developed and truly refined his own imagery over the last decade.

Christian Achenbach is a true painter. As banal as this statement may sound, it takes true courage for a contemporary artist to adopt a clear stance where every form of expression and every point of reference are generally permitted. Achenbach's achievement is nothing less than a continuation of the history of painting. By his own admission, ‘the subject is not as important, but rather it is a question of providing a suitable stage for painting as a process in itself.’

His works are built from numerous collages consisting of geometric shapes, gestural painting, color gradients, and neon shades. The static objects and dynamic elements are played against each other, testifying to a passion for material as well as his passion for process. Achenbach's material aethetics are grounded in an allure created by a fusion of different tools and techniques. The paint is brushed, scraped or sprayed. Glossy surfaces sit next to matt surfaces, rough next to smooth. Fine reliefs are derived from color spread out across the canvas.

In his earlier work, Achenbach mixed figuration with abstraction. In his more recent works he disengages from figurative depictions, choosing instead to develop the narrative of each painting using formal means. Associations intrude. References to futurism, to cubist elements and to concrete paintings of the 1970's are consistently ubiquitous through Achenbach’s oeuvre. Various artists come to mind: Vasarely, de Kooning, Kandinsky.

Achenbach associates his love for music with that of Kandinsky’s, who once claimed that he saw colors when hearing musical tones. It can be argued that the compositions and painterly rhythms give both artists' pictorial spaces respective 'sounds.' A closer look at Achenbach's art-historical quotations reveals an intelligent engagement with Modernity or more precisely with Post-Modernity.

On the one hand, he presents us with various quotes from the history of painting that can be considered as both a demonstration of his knowledge and his aesthetic preferences. On the other hand, he is questioning the viewer: Does “Darstellungshoheit” in art exist? Are Malevich's Black Square or the “dripping” of Jackson Pollock exclusively verified?

One of his intentions is a critical engagement with originality. The use of quotations serves as an instrument to encourage a discourse about aesthetic conventions and the existing conditions which constitute art. While he obviously juxtaposes various set pieces in his works, he also avoids any kind of ideological position. Such positions were inherent in works by artists of the 20th century.

To Christian Achenbach, Modernist painting – with its various facets, errors, and achievements – functions as an alphabet. He employs its characters to create his own language. It is here the title of the exhibition is truly grounded. Like the action of a kaleidoscope, Achenbach produces new assemblages of painterly set pieces, which in turn generate new works.

An extension of his reflections on the medium of painting by Achenbach can be found in his sculptures. In the case of Christian Achenbach, his sculptures can be regarded as three-dimensional paintings.The elements, cut out of aluminium and steel, are put together by the artist to form varied forms, which, in different sizes and shapes, have become their own body of works since 2013.The mechanical production of the individual parts stands in contrast to its subsequent painterly refinement. Achenbach's paintings as well as his sculptures investigate the effect of clashing colors and levels, thus demonstrating the same approach with different media.

For his latest sculptural works, the artist employs materials from Lalique, a traditional luxury glass brand. Looking closely at the individual parts of the sculptures shows that they combine different colors of glass created in the heating process – not mixed. Amorphous collages arise, the intergral part of which is light. The conceptual origin of Achenbach’s glass objects is to be found in the metaphysics of light - the starting point of neo-Platonism. Its doctrine says that light is the substance of all the things and effectively the whole world. Considering that God is the uncreated light that illuminates everything, it had been the reason as such for creating glass paintings in Gothic Cathedrals with chromatic and abstracted diaphaneity.

Finally, the reference point, the meaning and the bridge become clear. It is evident that the painting of Achenbach connects to his sculptures against this historical backdrop.

Christian Achenbach (born 1978) is a German sculptor and painter. Achenbach studied at the University of Art in Berlin with Burkhard Held, Daniel Richter and Anselm Reyle and graduated from Anselm Reyle’s master class in 2007.

With his artistic roots in 20th century art history, Achenbach composes his own aesthetic symphony of the known isms framed in a fresh postmodern perspective. Achenbach’s creative process lends itself to the world of musical composition where the multiplicity of violent clashing of colors and shapes emphasizes the shift of tonality, thereby conjuring a materiality of sound.

Each artwork presents the childlike joy and liberty of Achenbach’s brush with an immanent nod to the history of modern art. Modernism, Dadaism and Cubism are undeniably present in each painting where no central motif is to be found, but geometric shapes and symbols instead rhizomatically spirals in and out of each other. Much like the music in which Achenbach finds his inspiration, the definite outlines are blurry, the array of colors explosive.

Christian Achenbach lives and works in Berlin. In 2008 he was an artist in residence at Statens Værksteder for Kunst og Håndværk in Copenhagen. He has exhibited widely in Germany and Denmark as well as internationally.

Kaleidoscope opens May 24 at 5 pm in conjunction with the all-new Art Week Copenhagen. Everyone is invited!

The show will be on view until June 30.