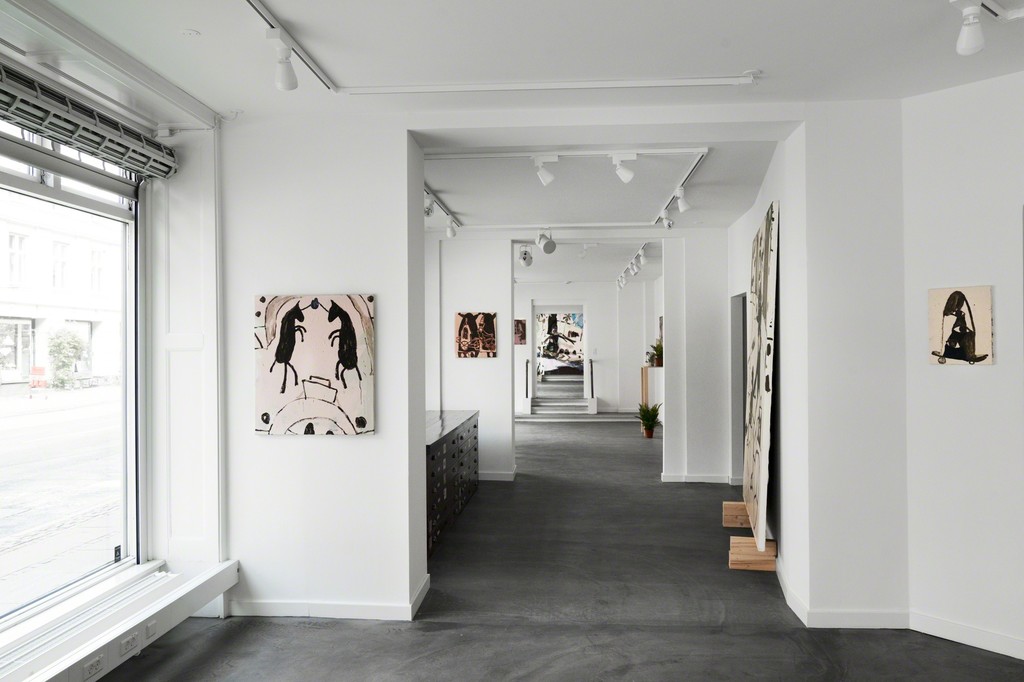 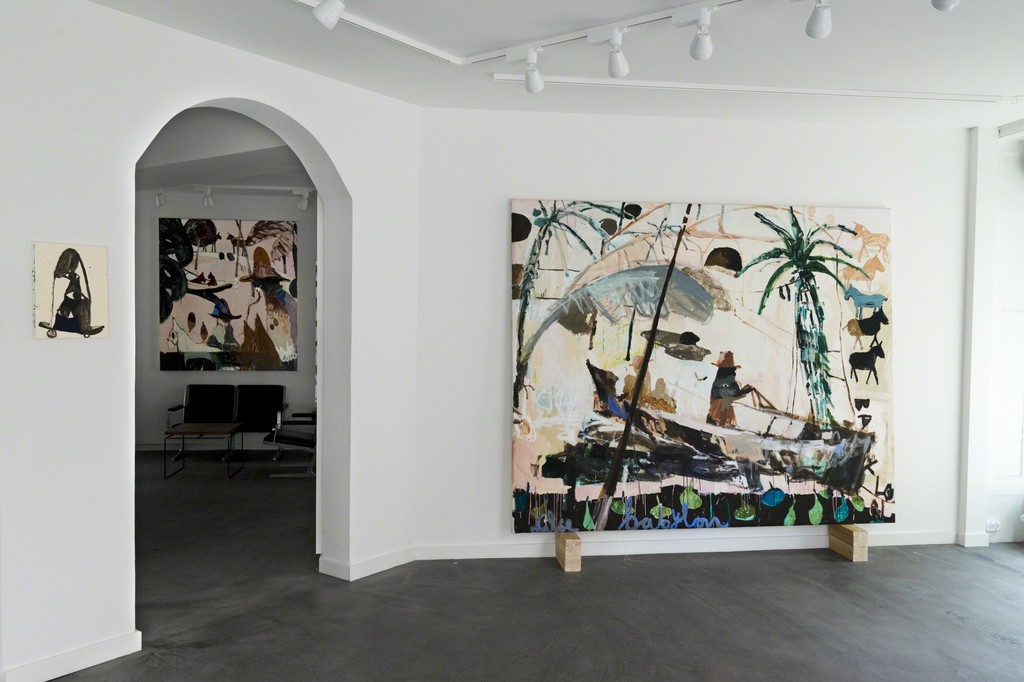 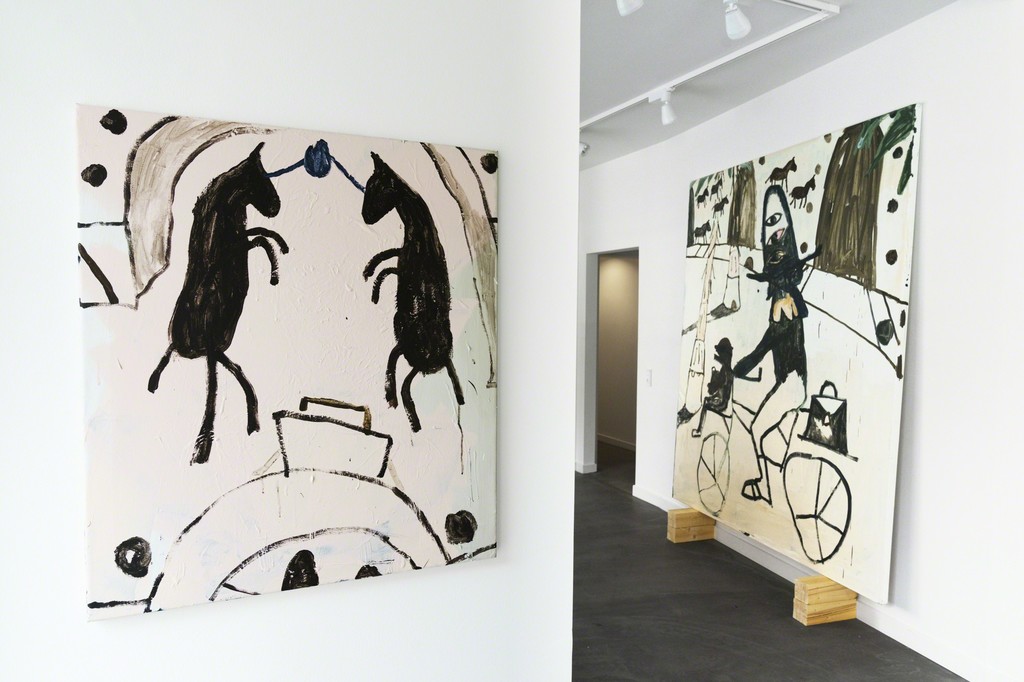 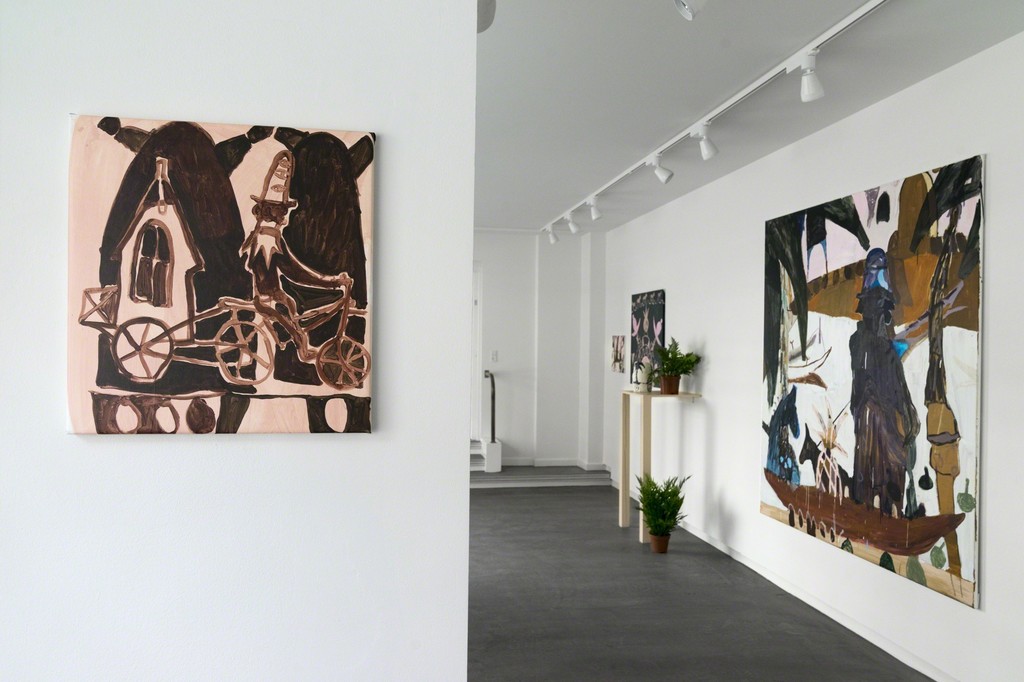 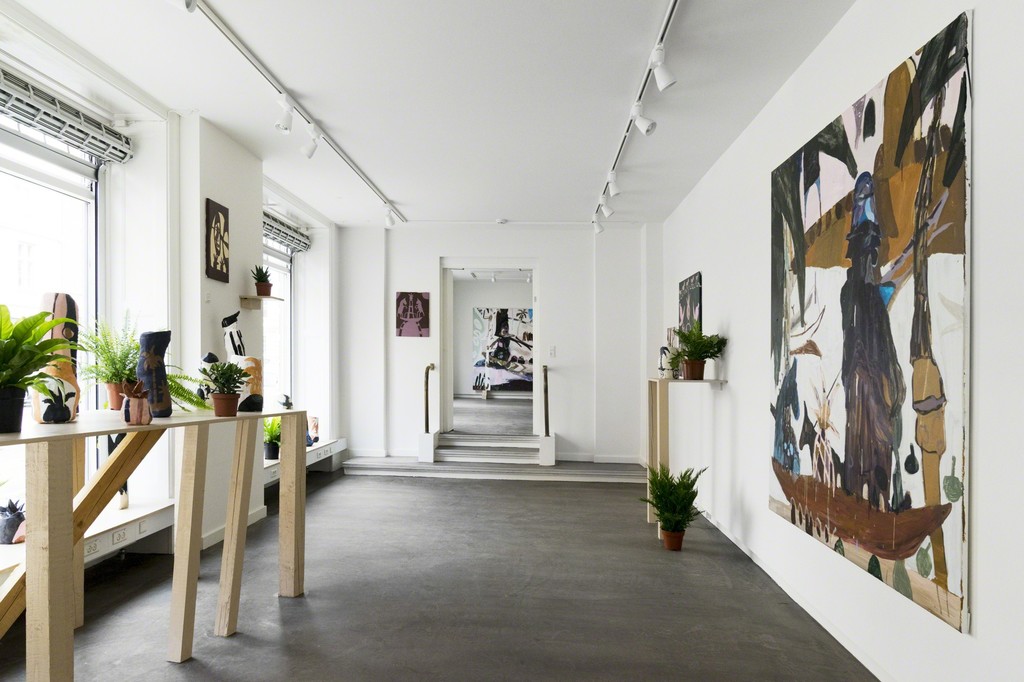 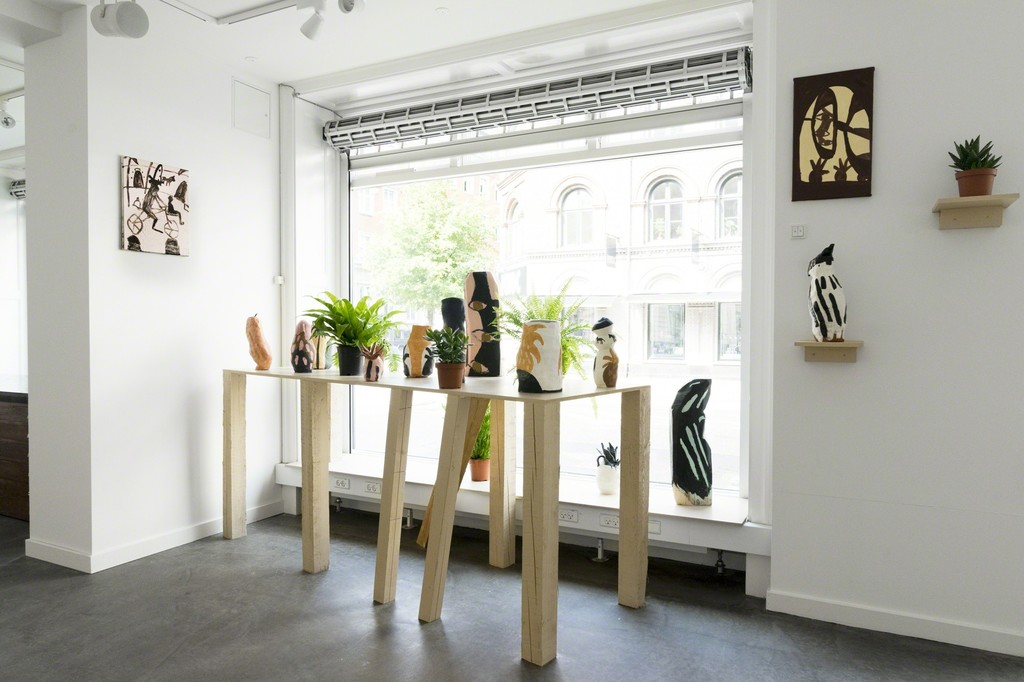 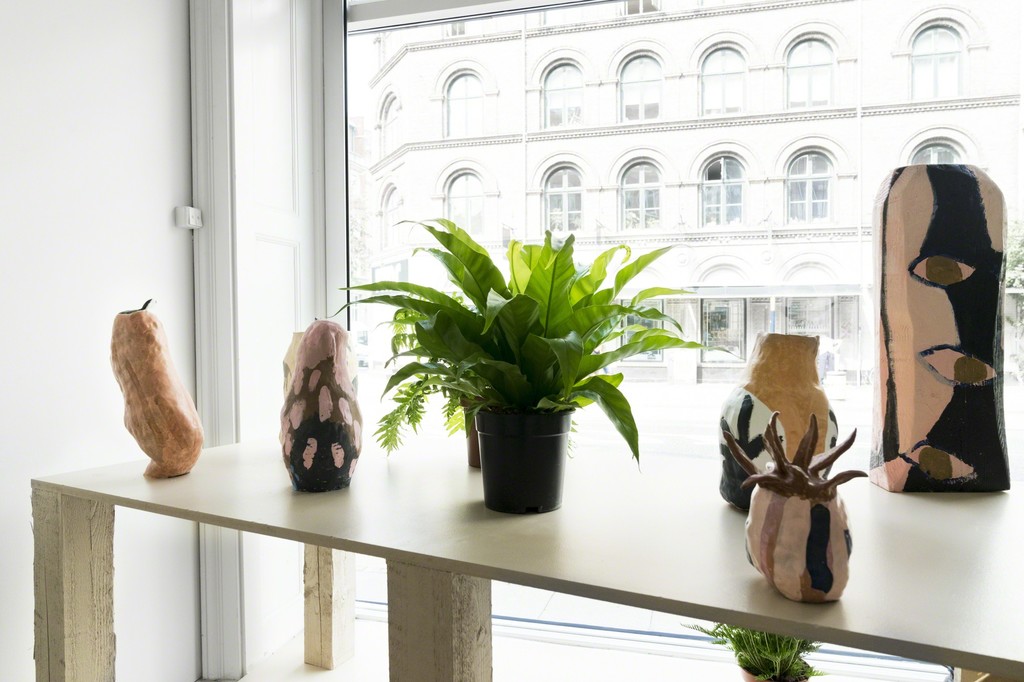 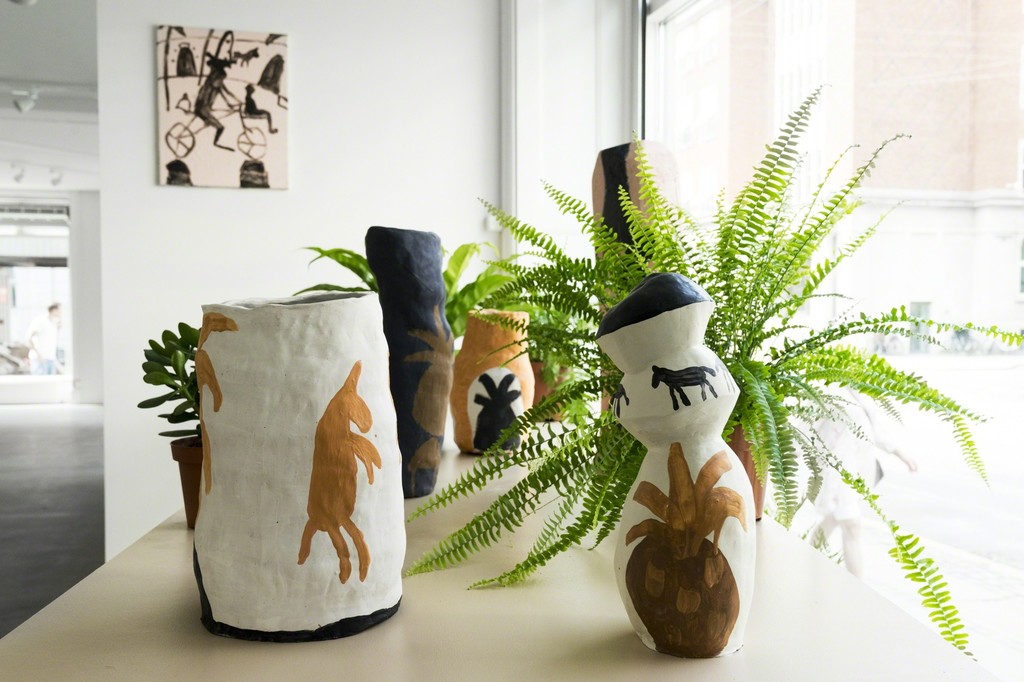 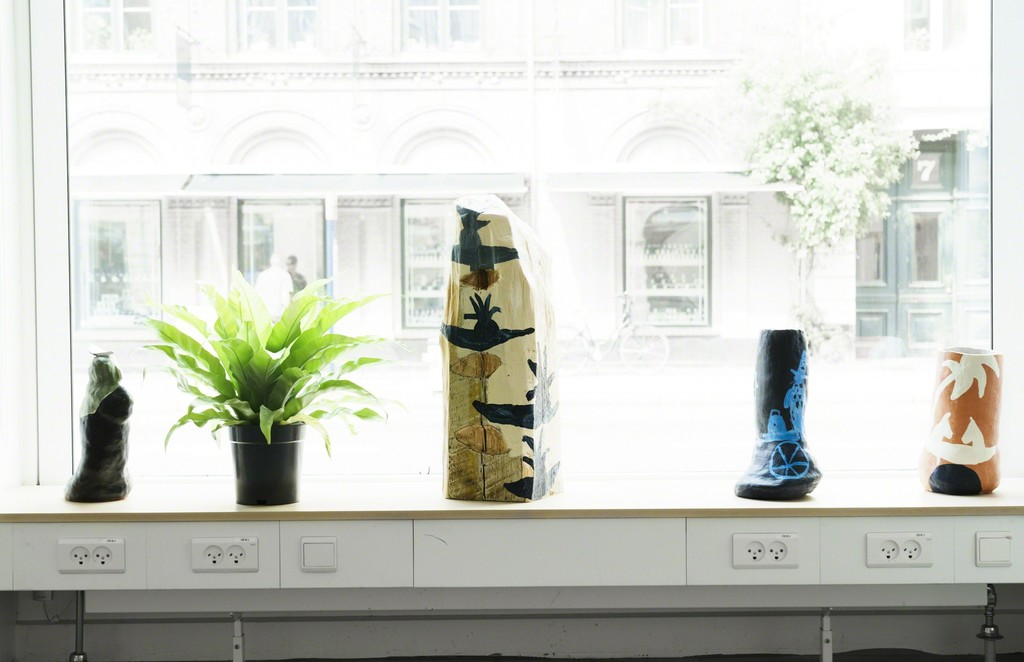 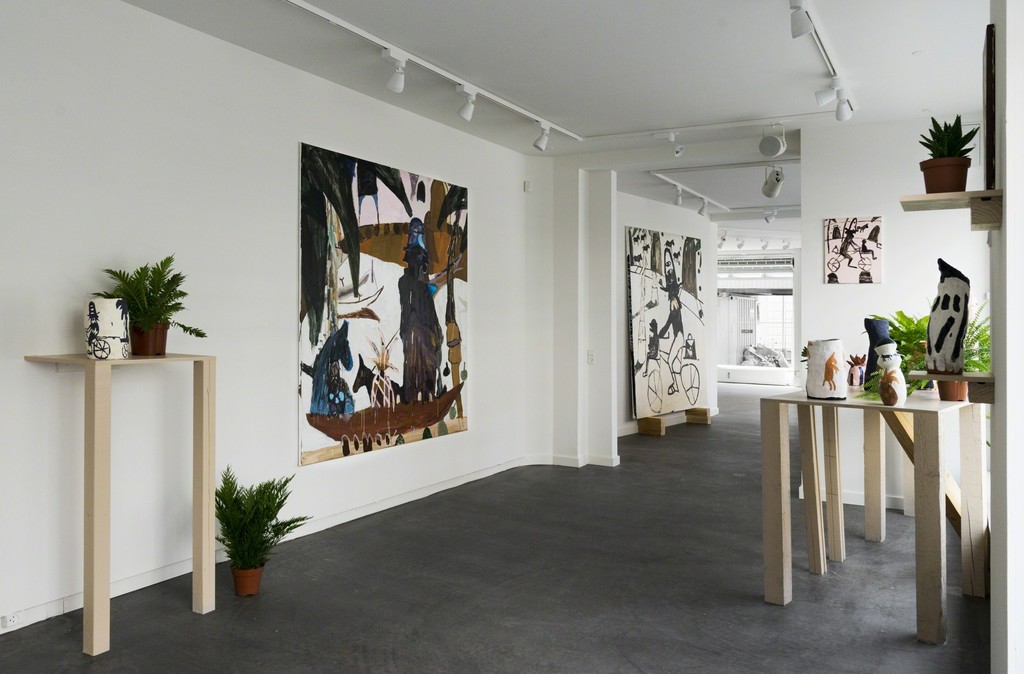 Throughout the last decade, Kjærgaard’s work has been concerned with neglected constructions and the notion of Dystopian societies. Because of this, she has spent much time visiting places affected by untamed decay, such as the deserted Russian mining town Pyramiden located by the Arctic Circle and the abandoned amusement park Spreepark in Berlin. Through architectural constructions and urban fiction, Kjærgaard examines the consequences caused by the dreams and desires of a Utopian society.

In her exhibition News From Nowhere, Kjærgaard has constructed an enormous map of the fictional town of MOIRANIA, where Babylonian city walls encircle the scenery. Instead of streets, canals run in and out of one another and pave the way for new canals as well as new courtyards through immense arches in a labyrinthine universe. The walls are embellished with horses, dogs and ornaments, and through the surface of the water, palm trees and bushes arise. Humans and animals alike sail the city in boats carrying designer bags for their belongings.

The Moiranians live in houses elevated into the trees by poles. There are horse race courses and swimming pools, and the roofs are used as tracks for bike racing and new layers of residence. Outside the town walls, the gates open into a big jungle also with habitation distributed around the tree tops. Laundry lines dangle between the trees, and the houses are connected by suspension bridges hanging above the water where boats are moored.

The map is an instrument that Kjærgaard uses as her program and archive in the creation of her exhibition. News From Nowhere consists of a number of paintings that can be seen as situations from Moirania. A big wooden construction, which works as a piece of furniture for several sculptures, is also a part of the exhibition. This construction was build from Kjærgaard’s own studio storage unit, but for the purpose of this exhibition, it has been assembled in an entirely new way. This is a reference to the survival strategies of Moirania, whose inhabitants utilize already existing and available objects to construct what they need.

A central Moiranian character is the woman with the three-eyed hat, who rows or bikes around with a child. There are horses and dogs, who act as subjects on equal terms as the humans. A hierarchy and a scenario, which can both be a dream of a society or a Dystopia, is being hinted, which suggests a reinterpretation of William Morris´ forward-thinking utopia “News From Nowhere” from 1890.

The town is partly inspired by Kjærgaard´s own trips to the Arctic Circle; partly by Venezuela; partly by the movie-set behind Babylon from D.W. Griffith´s "Intolerance" from 1917.