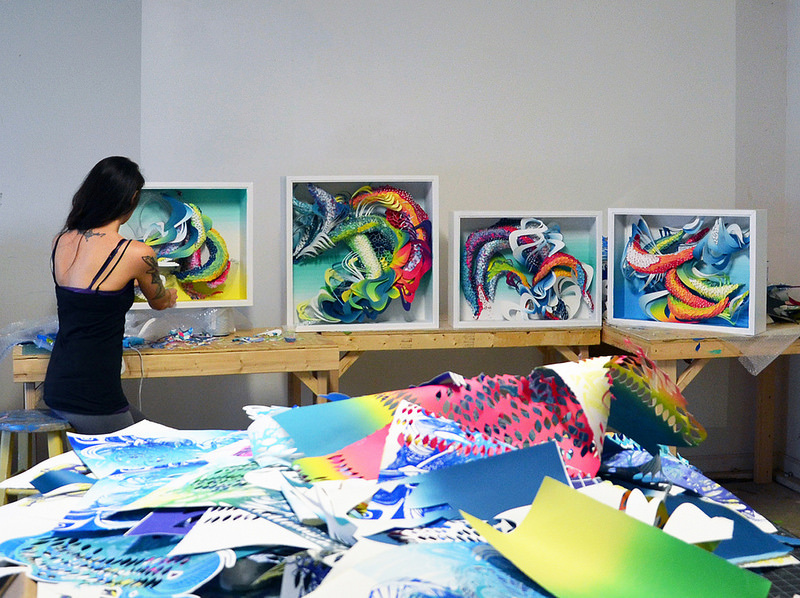 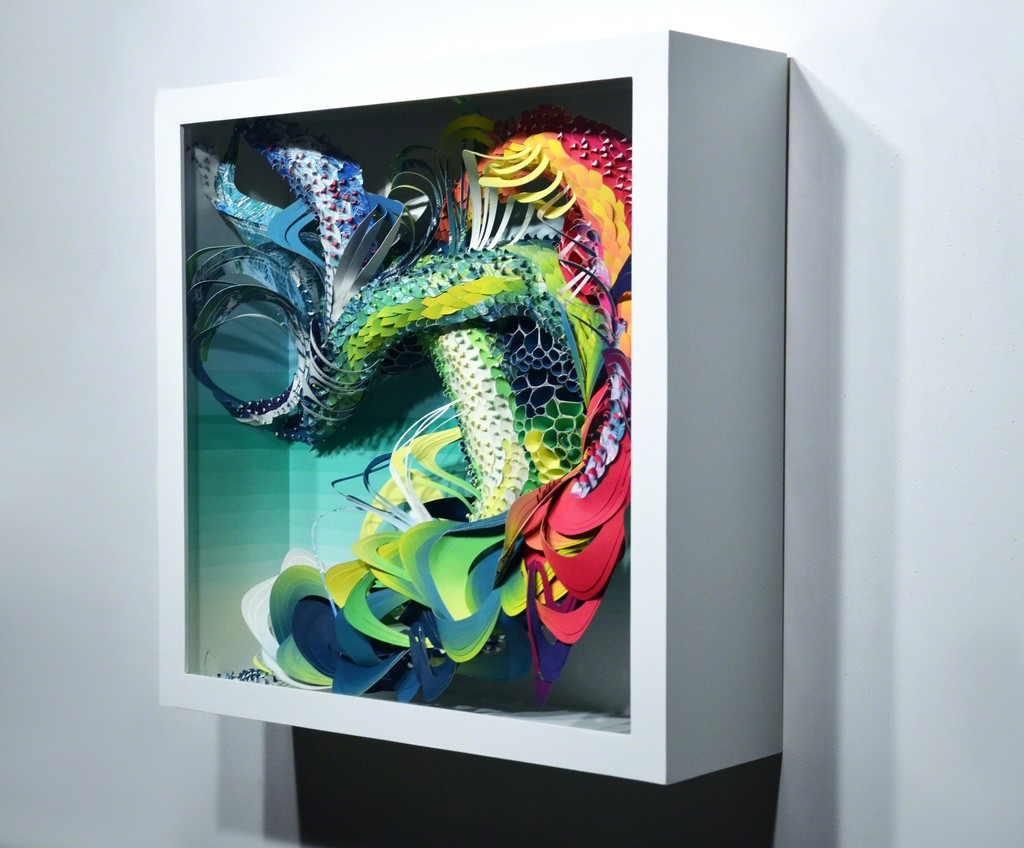 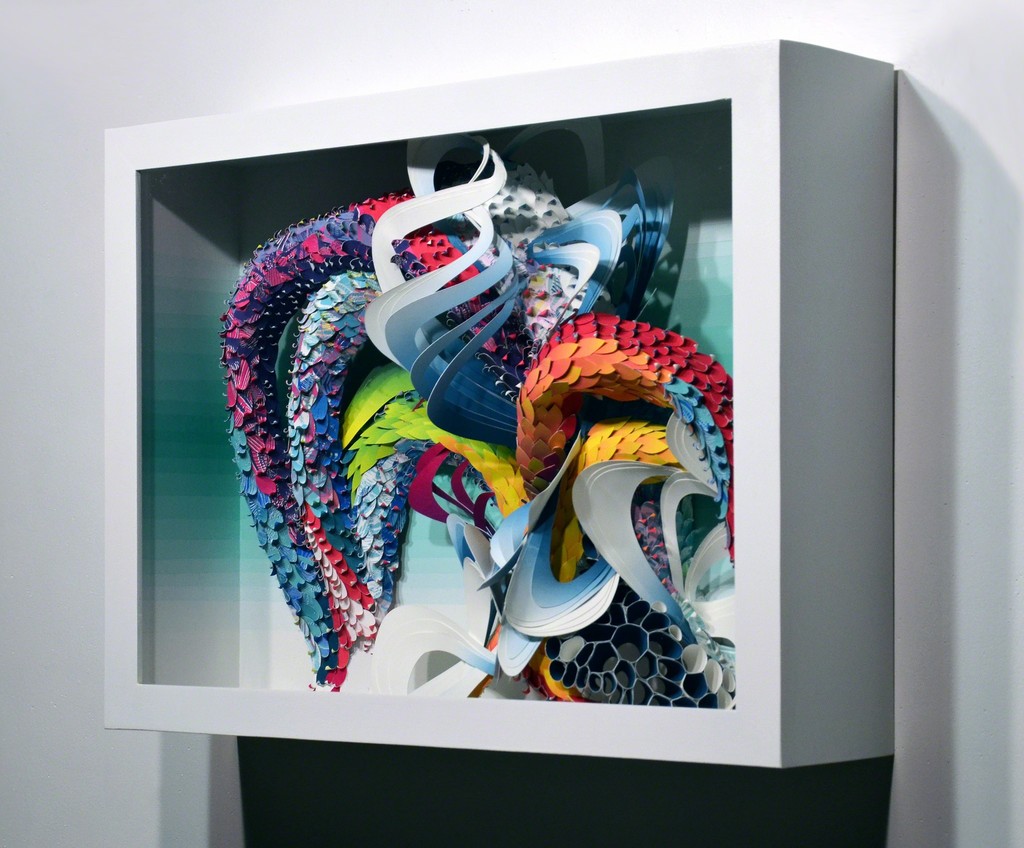 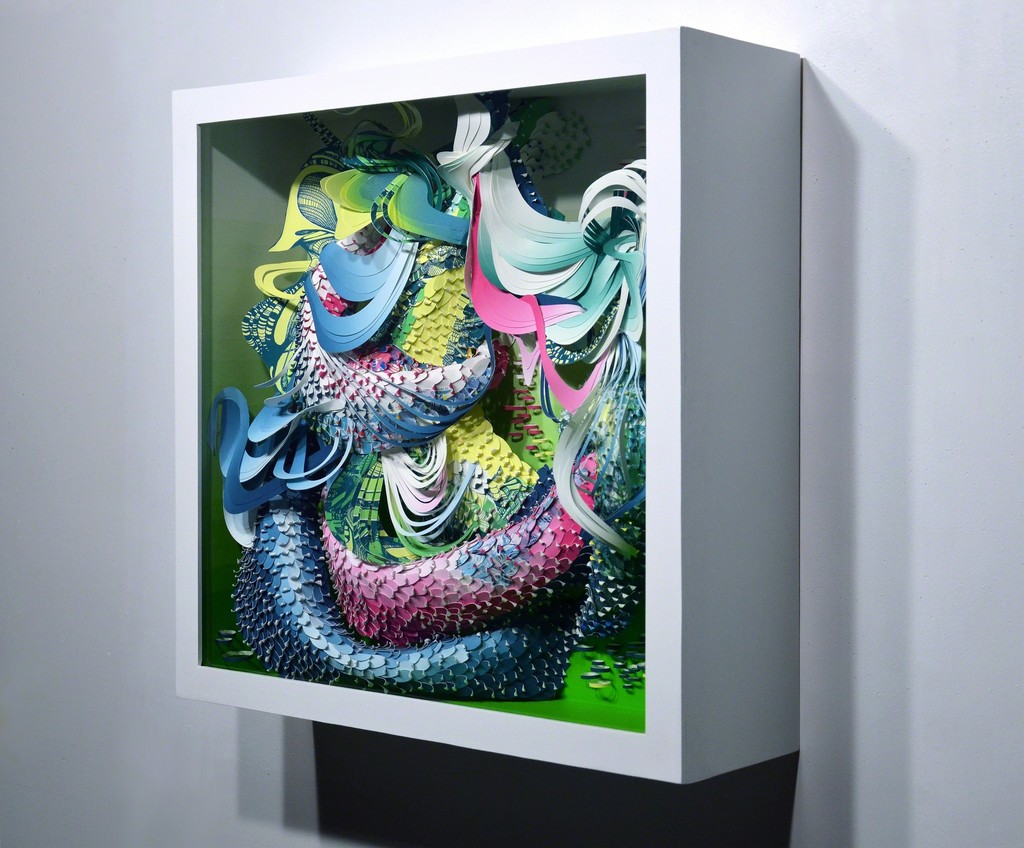 Hashimoto Contemporary is proud to present the debut exhibition of multi-disciplinary artist Crystal Wagner. Titled Synesthesia, this show explores the psychological realm between the familiar and strange through an immersive world of color, texture and fluidity. Consisting of hand cut paper sculptures, which range in scale and presentation, and combining screen printing, cut paper and various dollar store items, Wagner meticulously assembles her sculptures with a sense of organic growth. Allowing her materials to build upon themselves, layer by layer, each structure swells into a mass of movement, as if grown from the soil of another planet.

Housed in custom made wooden terrariums, Wagner’s cut paper works convey the delicate manner in which the artist constructs her sculptures, giving the illusion of a swirling force, sprouting and flourishing against it’s rigid constraints. The artist treats each box as a living organism, awake and breathing, that pulls the viewer in for a closer look.

Alongside her terrariums, Wagner will also design a site-specific paper installation of larger proportions. Built within the gallery space, this installation surrounds the viewer, taking root in various corners and surfaces. This installation will be constructed intuitively, with the gallery serving as a blank canvas for Wagner’s polychromatic life forms.

The term “synesthesia” describes the neurological phenomenon in which one or more of your senses is activated simultaneously to create an involuntary experiences in a second sensory or cognitive pathway. Wagner’s work pulls from this concept, causing viewers to questions their their perception of the atmosphere around them.

Crystal Wagner was born in Baltimore where she began her exploration in art by drawing imaginative birds. She attended Keystone College in La Plume, Pennsylvania, where she earned an Associate Degree in Fine Art. Wagner then moved to Atlanta to attend the Atlanta College of Art, earning her Bachelor Degree in printmaking and sculpture and receiving the Southern Graphics Council Fellowship for her achievements in printmaking. In 2008 Wagner completed her MFA at the University of Tennessee. In 2006 she participated in a month long Artist-in-Residency in Poznañ, Poland. In 2007 she was a Visiting Artist at Kansas City Art Institute and self-published her novel, “Crimson Sky”. In 2007, she was awarded the Terry Burnett Award for her overall achievements in fine art at the University of Tennessee. In 2008, she was Visiting Artist at Georgia College and State University in Milledgeville as well as the Joshua Tree National Park Residency in California. Her work has been accepted into numerous national juried exhibitions and has exhibited nationally and internationally. Her large sculptural form, “Conversion”, is part of the permanent collection at the Knoxville Museum of Art.