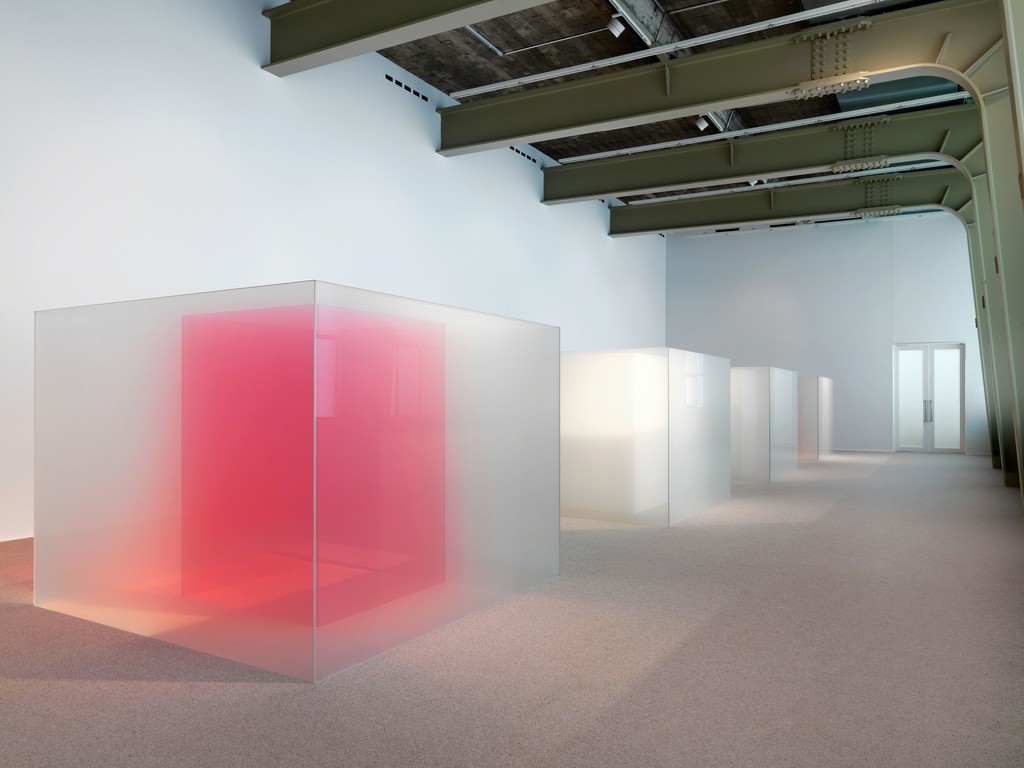 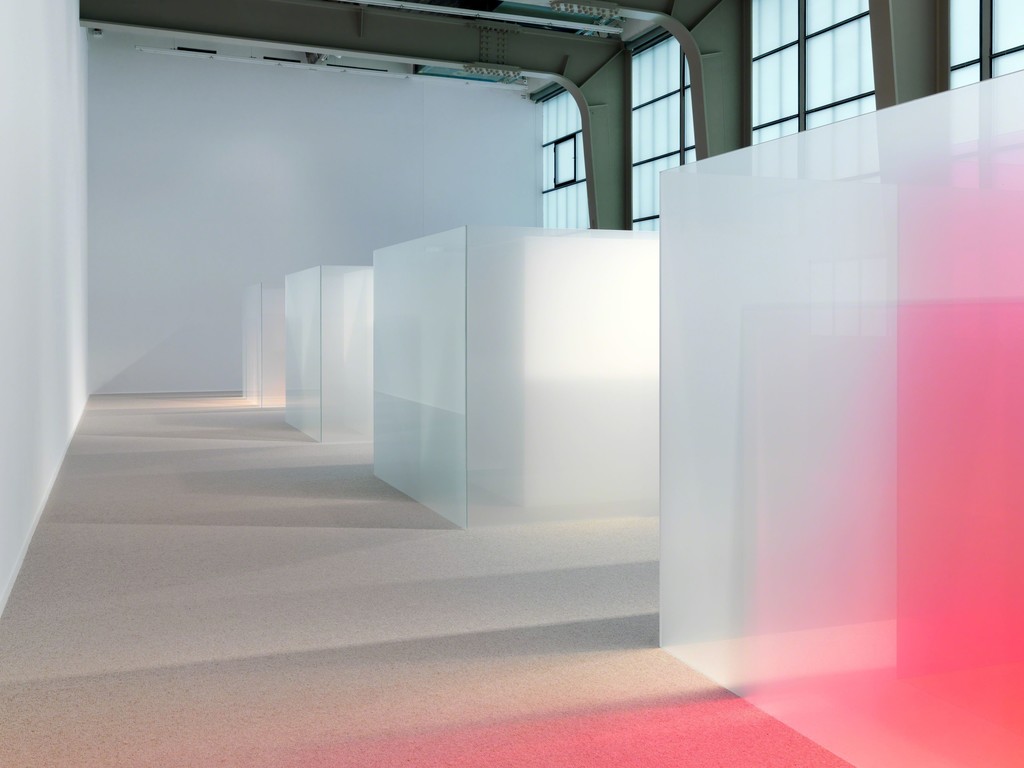 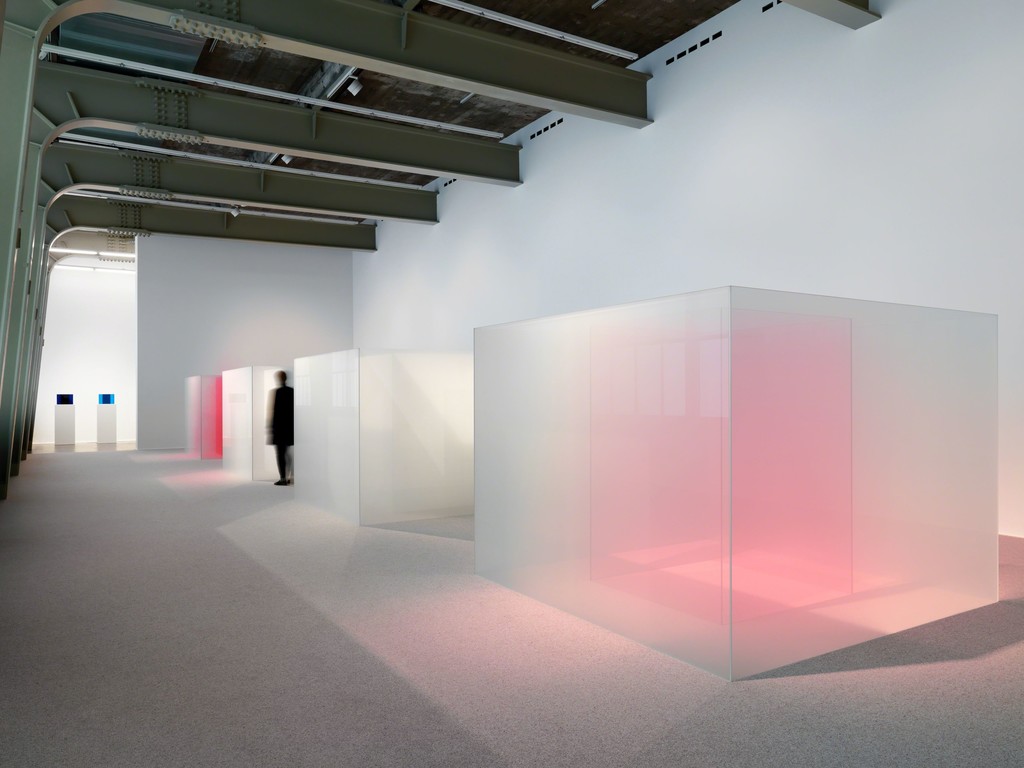 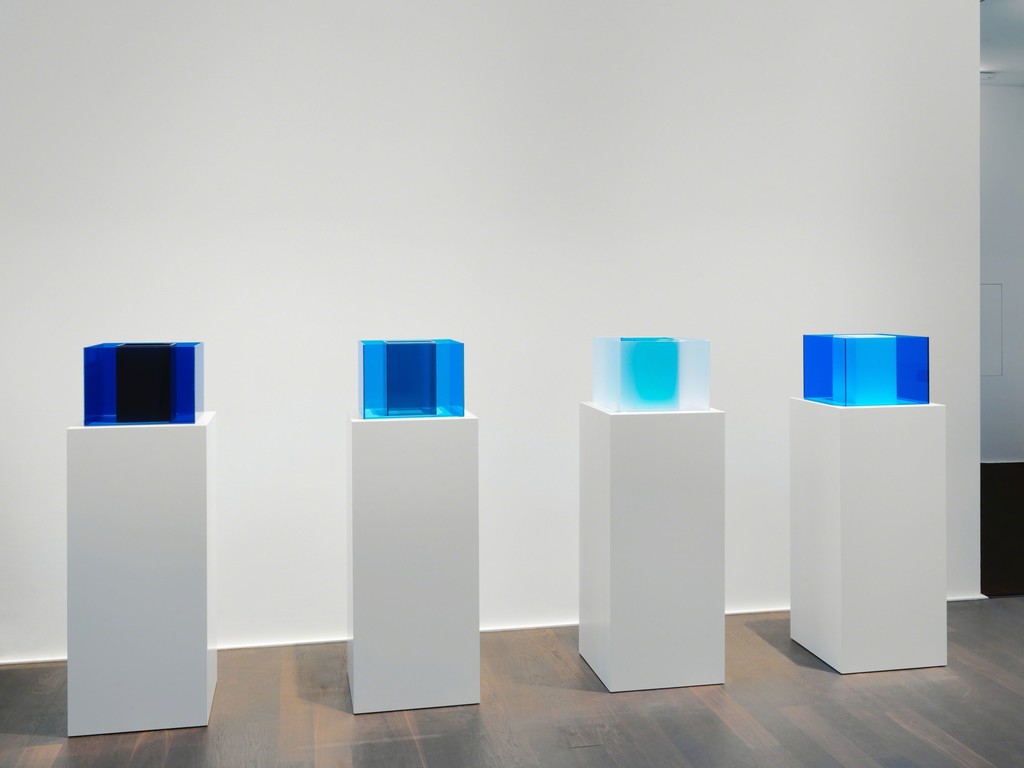 Hauser & Wirth Zürich is proud to present a major solo presentation by sculptor Larry Bell. This marks the gallery’s first exhibition of Bell’s work since representing the artist across America and Europe, and his first solo exhibition in Switzerland since 2004. Bell is one of the most renowned and influential artists to emerge from the Los Angeles art scene of the 1960s, alongside contemporaries Frank Stella and Donald Judd, and had garnered international repute by the age of 30. Known foremost for his refined surface treatment of glass and explorations of light, reflection and shadow through the material, Bell’s significant oeuvre extends from painting and works on paper to glass sculptures and furniture design.

‘Venice Fog: Recent Investigations’ is an exhibition of new laminated glass works with colour combinations inspired by the marine fog which rolls into Venice CA, the location of Bell’s studio since the early 1960s. Large cubic glass works will showcase Bell’s interpretation of the luminosity created by the dispersion of water in the fog intermingling with the lights of Los Angeles’ desert plain. The structure presented is based on one Bell originally introduced in 1992 in an outdoor commission for the Museum Abteiberg, Mönchengladbach, and features a four-paneled structure within a larger version of itself.

This sculpture allows two colours to be fused together through reflection and refraction. This technique has been a focal element of Bell’s work since he was in art school and cut scrap glass to fit into the wooden shadowboxes he found at his part-time picture framing job: ‘The one break in the glass created three lines – One a reflection from the break, one the shadow of the break, and the break itself. Reflection, transmission and edge, these elements still are dynamic forces in my work.’ The constant presence of the misty Sea Salt color of the exterior glass structures plays with and against the various hues of the interior glass structures, evoking the mercurial light of the Los Angeles sun, a glow that has preoccupied Bell throughout his career.

Bell’s use of commercial industrial processes in his studio demonstrates his unparalleled skill and dedication in each step of his sculptures’ fabrication. Since 1969 his studio has managed its own high-vacuum coating system that allows him to deposit thin metal films onto his glass surfaces, harnessing a little known technique developed for aeronautics to create an unprecedented body of work.

While these monumental works occupy and transform Hauser & Wirth’s 2nd floor space in the Löwenbräu, they will be accompanied by a series of 1:6 small-scale maquettes of the same structure. In turn, the sculptures will animate and be animated by the natural light coming in through the gallery’s wall of windows; the varying conditions at different times of day repeatedly altering visitors’ experience of the works.

Bell’s understanding of the potential of glass and light allows him to expand visual and physical fields of perception, and his sculptures to surpass traditional bounds of the medium. He has said: ‘Although we tend to think of glass as a window, it is a solid liquid that has at once three distinctive qualities: it reflects light, it absorbs light, and it transmits light all at the same time.’ The exhibition presents true examples of Bell’s glass work mastery, as the sculptures appear material yet immaterial, hard yet ethereal, transparent yet saturated with a myriad of fleeting hues.