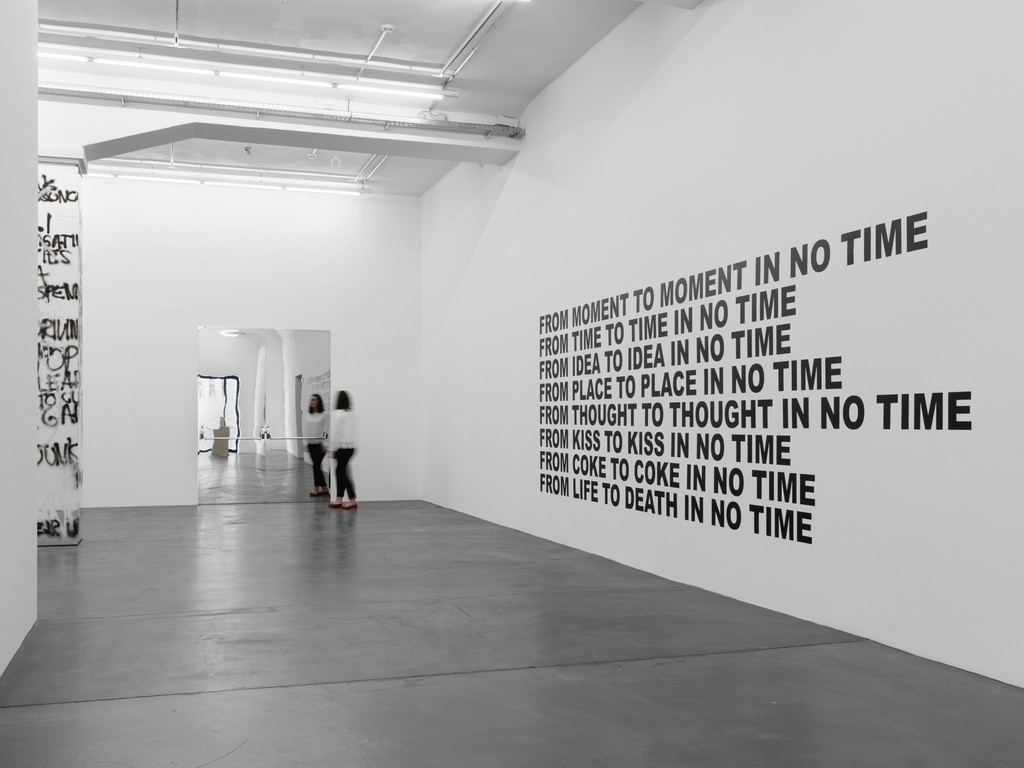 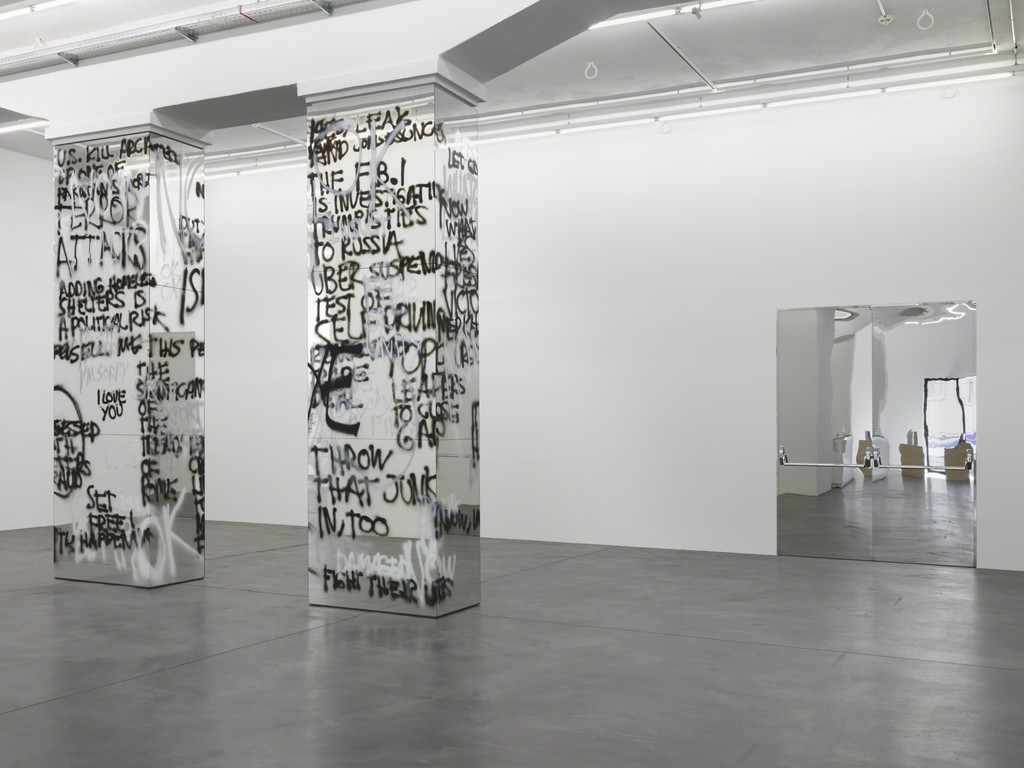 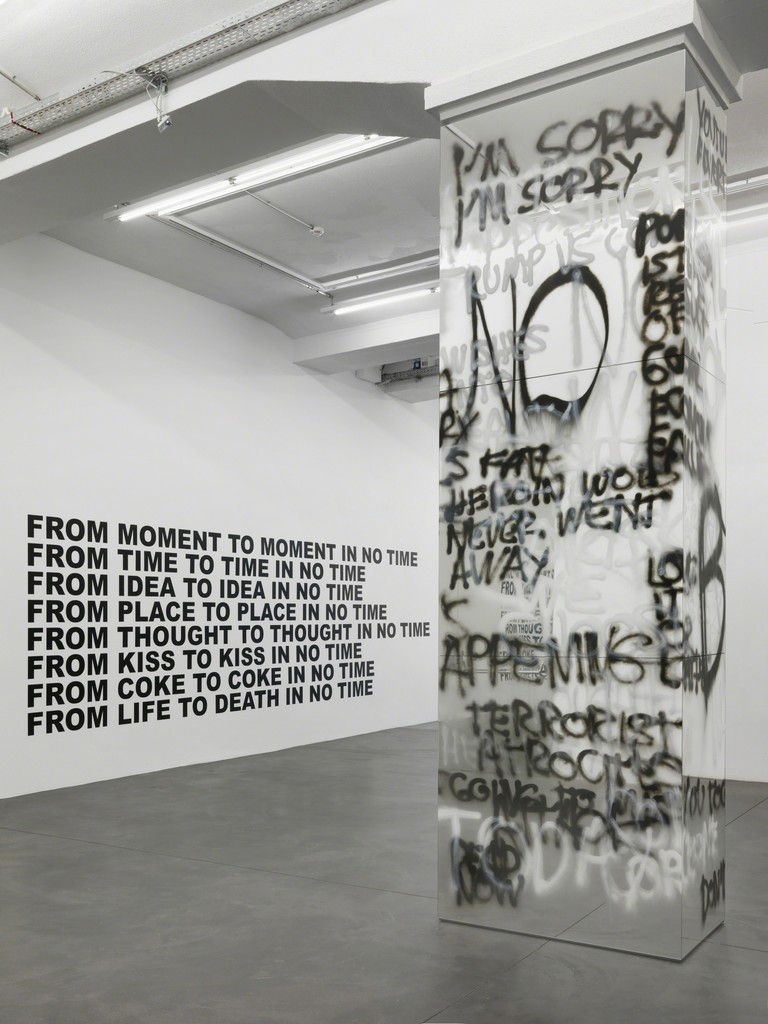 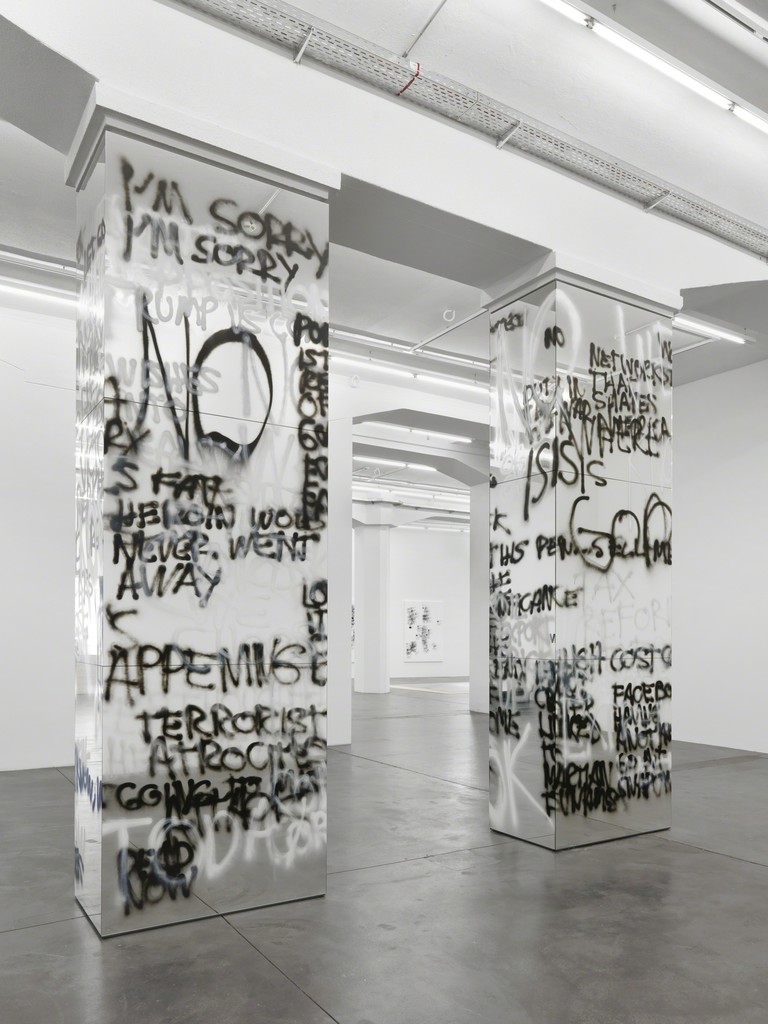 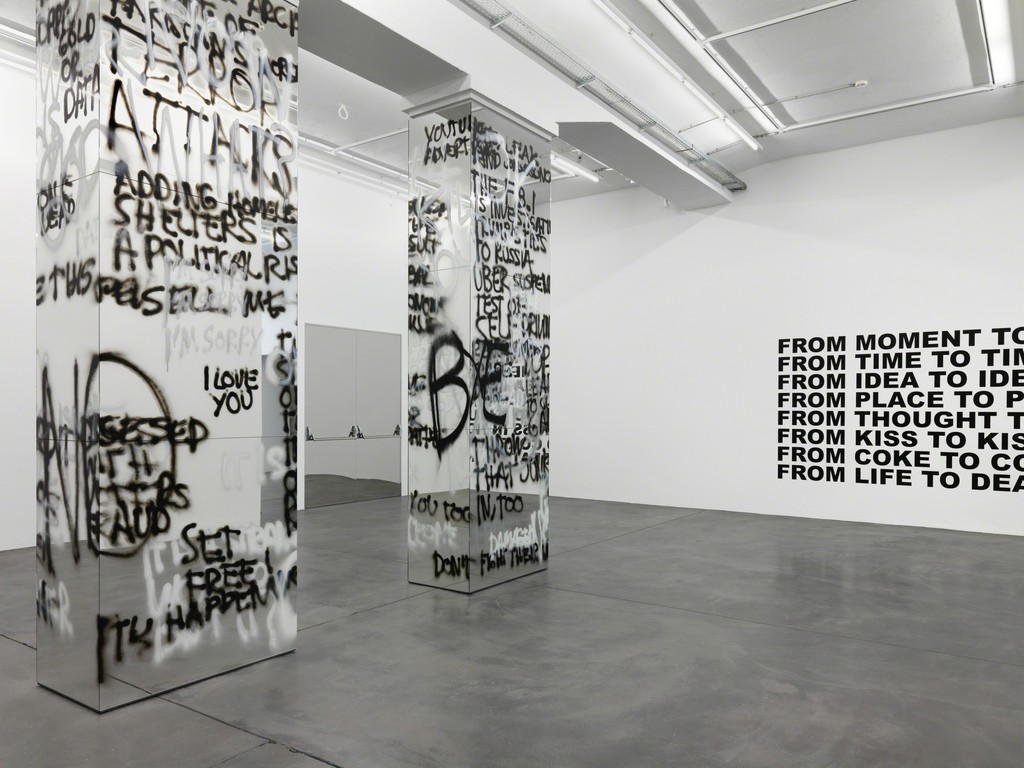 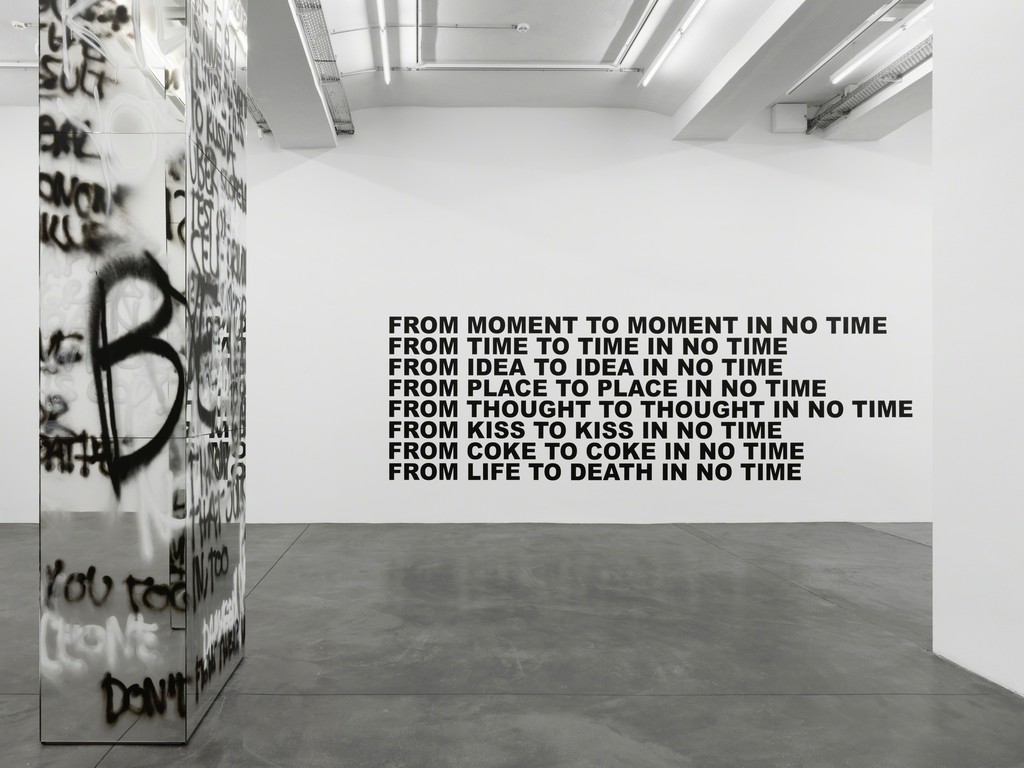 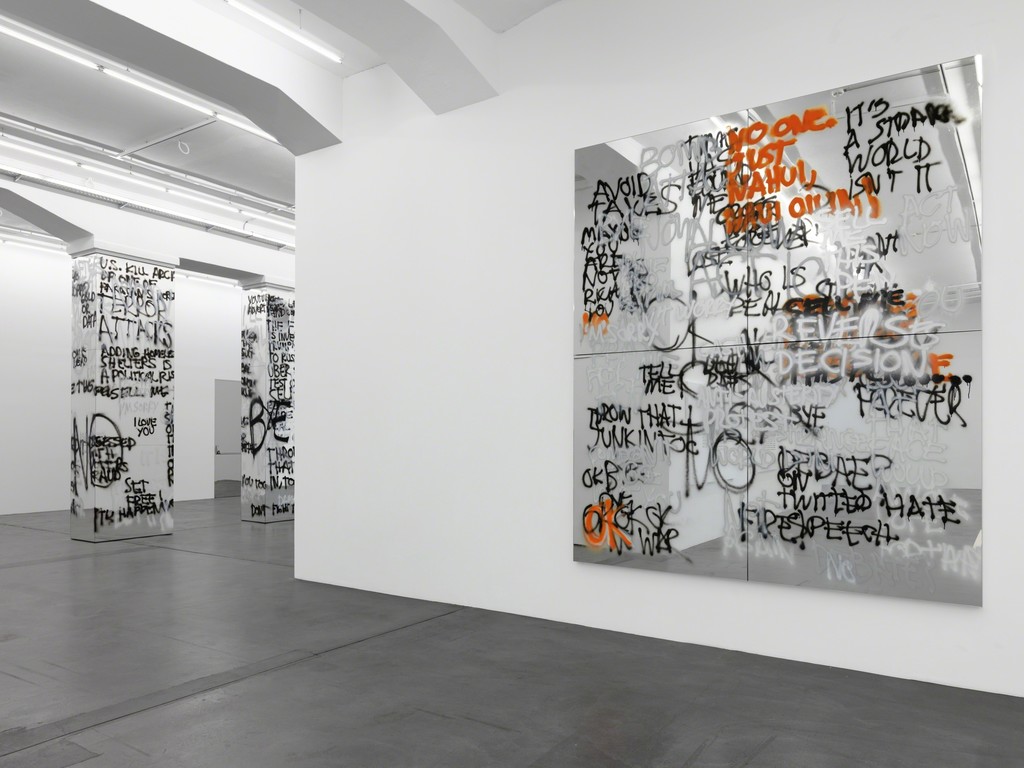 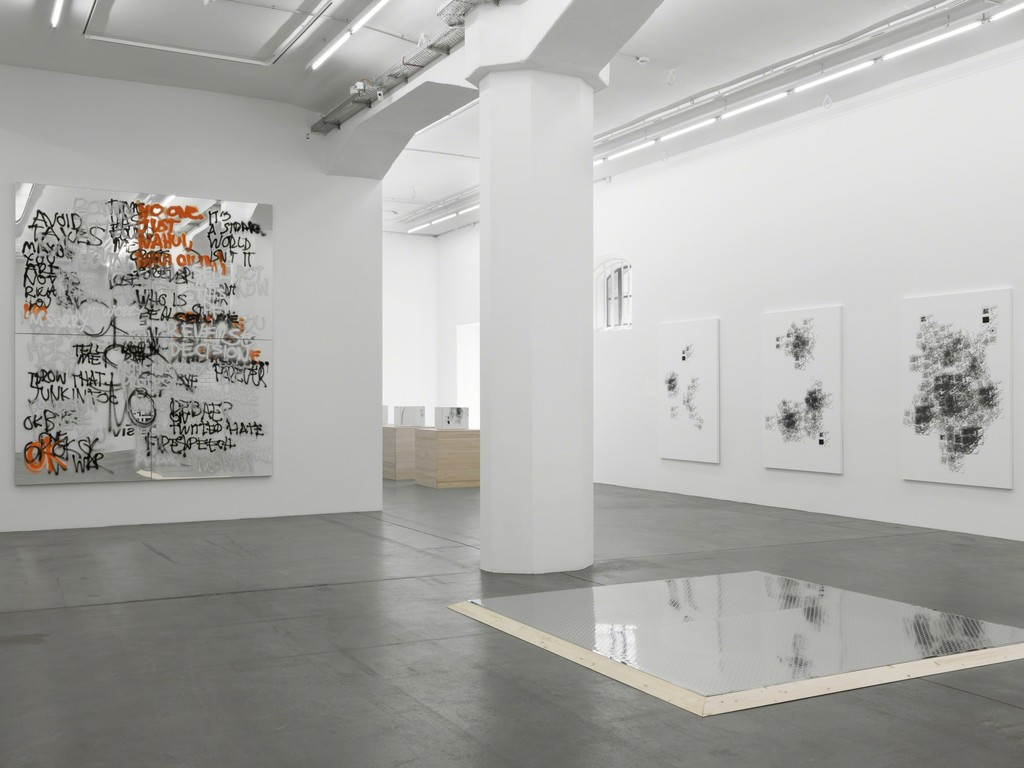 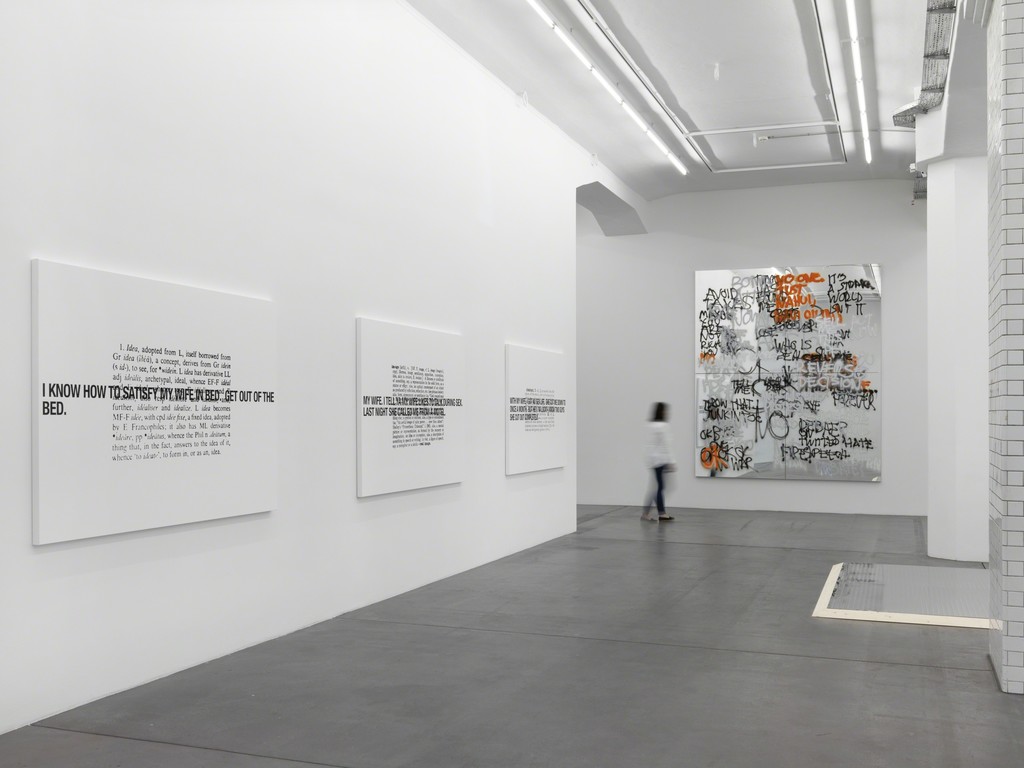 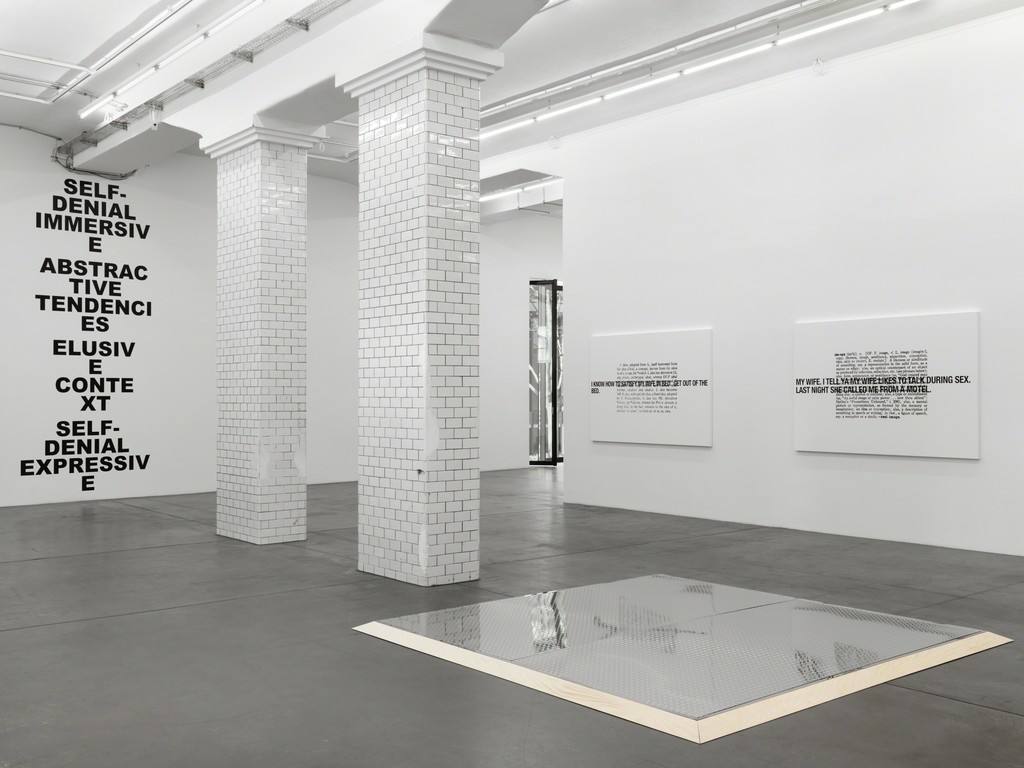 Stefan Brüggemann’s oeuvre is characterised by an ironic conflation of Conceptualism, Minimalism and a post-Pop aesthetic. Hauser & Wirth Zürich is delighted to present the artist’s first solo exhibition in Zurich, showcasing new and recent painting and sculpture. In ‘TAKE, PUT AND ABANDON’ Brüggemann’s masterful wordplay and conceptual rigour coalesce to create a bold and pertinent body of work focusing on themes of appropriation and displacement. The philosophy of language is an important tenet in Brüggemann’s practice, in which text functions as a fluid medium, utilised for both form and meaning; his choice of words typically provocative, acerbic and topical. The collection of works presented in Zurich – Joke and Definition paintings, Cartoon paintings, TEXT PIECES, and the latest iteration of the artist’s best-known series, Headlines and Last Lines in the Movies – all exemplify his sharp manipulation of language. Shown alongside these painting and wall works are a group of stainless steel readymades. The title of the exhibition takes inspiration from the artist’s process of appropriation.

Brüggemann’s practice sits outside the canon of the conceptual artists practicing in the 1960s and 1970s, who sought dematerialisation and rejected the commercialisation of art. Instead his aesthetic is refined and luxurious, whilst maintaining a punk attitude. This is exemplified in the artist’s series that utilise mirror, a surface typically associated with opulence: Baroque and Art Decco architecture, corporate buildings and luxury design. In Brüggemann’s hands this understanding is subverted, the surface instead serves to reflect the flaws of its surroundings. ‘Trash Mirror Boxes (after MV)’ (2016) pays tribute to Meyer Veisman’s ‘Trash’ (1991) and Pietro Manzoni’s ‘Artist Shit’ (1961) – Brüggemann has commandeered the joke played by both of these artists. The work emulates cardboard boxes bearing the print of packing tape and when stacked in groups they are reminiscent of cartons left in a warehouse. The word ‘Trash’ is scrawled across each carton, but rather than denoting the contents, this label refers to what is reflected – the viewer and the room it inhabits. Critic and curator Santiago Olmo has described this element of Brüggemann’s work as ‘luxury insulted’ or ‘luxury blemished’.

‘Headlines and Last Lines in the Movies’ (2016) is conceived with the same methodology. Sentences taken from current news headlines are merged with the finishing lines of popular films and spray-painted in aggressive orange, white and black graffiti onto a wall of mirrors. The texts blur reality and fiction, functioning as a microcosm for the state of the global media today. Here Brüggemann employs Ludwig Wittgenstein’s philosophy of language, that the form and style of writing impact our understanding of the text: printed text is not read in the same way as a hand-written note, a mural is perceived differently to graffiti. As Olmo summarises, ‘writing is understood as a shape or sign that establishes the truth-value of that specific text’s message’. With this in mind, Brüggemann appears to be criticising the way in which society consume information – the graffiti denotes vandalism, a situation of precariousness. For Brüggemann, this work ‘reflects my way of analysing how society is shaped through media, information and through movies. They shape human behaviour, they tell you… how to express yourself, how to lead a lifestyle which is successful or not, while the media manipulate the perception of how the world adapts to this moment. And those factors are what shape the individualism of today’. Headlines and Last Lines in the Movies is an ongoing series that the artist began in 2010, and new variations are shown in the exhibition. For the first time the mirrors will appear in 3D form, wrapped around the central pillars of the gallery space.

In the new group of Joke and Definition paintings, Brüggemann brings together Joseph Kosuth’s series Art as Ideas (1966 – ) and Richard Prince’s Joke Paintings (1985 –). Each work combines a Kosuth philosophical definition with a Prince joke, literally bringing together the conceptual and pop traditions in a feat of irony. Maintaining the scale and composition of the original works, Brüggemann relinquishes all formal decisions to his sources. They are elegant and abstract.

Cartoon paintings is a body of work never seen before. Brüggemann has appropriated a satirical cartoon drawn by American artist Ad Reinhardt in the late 1950s. The original drawing mocks the common reception of Abstract Expressionism: the first frame of the cartoon shows a banker looking at a Jackson Pollock painting saying ‘Ha ha ha, what does this represent?’. In the following frame, the animated painting points back the banker, responding with ‘What do you represent?’. Brüggemann pastes multiple inkjet prints of the cartoon onto white canvas before adding small but expressive brush strokes in black oil paint and ink. He sees these works as a reflection on the contemporary Internet culture of ‘ctrl + copy + paste’, a phenomenon inconceivable at the time when the cartoon was first published.

Three minimalist steel sculptures add another dimension to the presentation. ‘Outdoor’ (2016) is an appropriation of Donald Judd’s large-scale revolving door sculpture in Marfa TX. A lightweight stainless steel door rotates continuously in its frame, removing its function entirely. ‘Trap Door’ (2017) emulates a trap door as you find on the street in a city like New York or London, and similarly, ‘Exit Door’ (2017) looks like the fire exit of an urban building. These two works build on the concept of the readymade and for the artist are ‘generators of doubt’ – When the viewer doesn’t know what they are looking at ‘they are lost in their conscious and unconscious space’, Brüggemann says. ‘When you are doubting and trying to figure out what you are looking at, it’s the only moment where you work on reality; and the essential aspect of work is there.’ The sculptures’ connotations with urban life, perhaps also tempt the viewer to ask what is underneath or behind the economic and social structures of the capitalist metropolis.