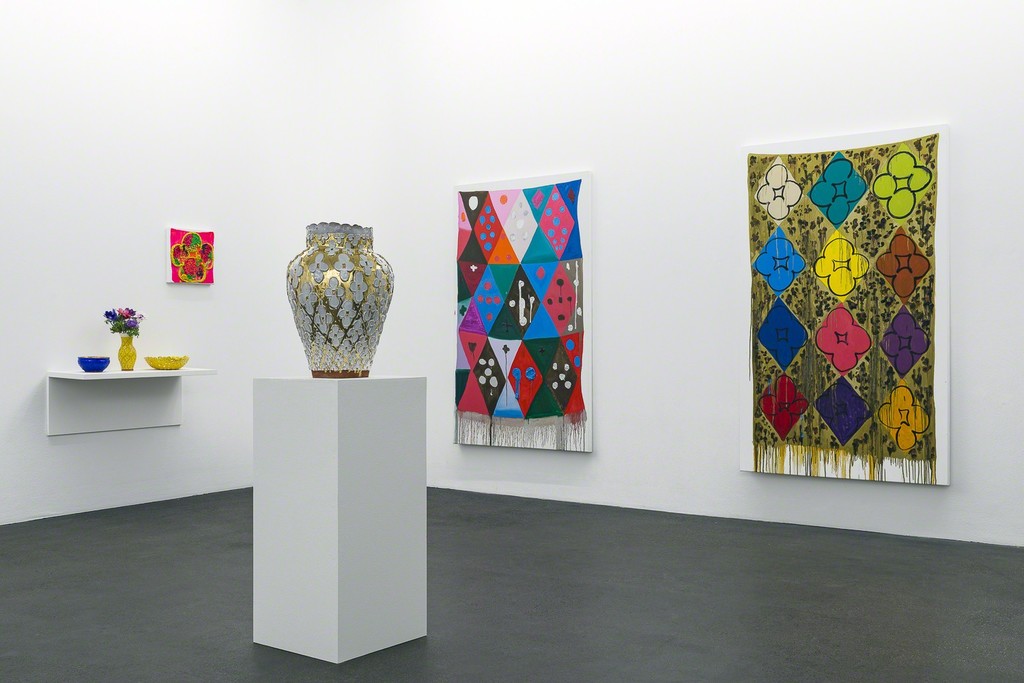 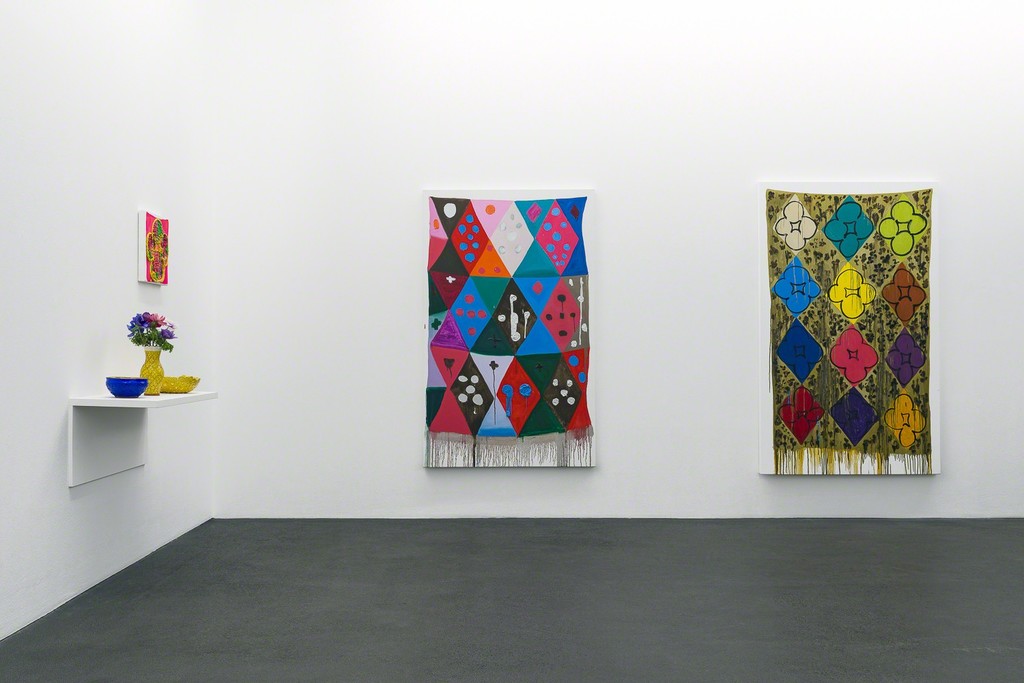 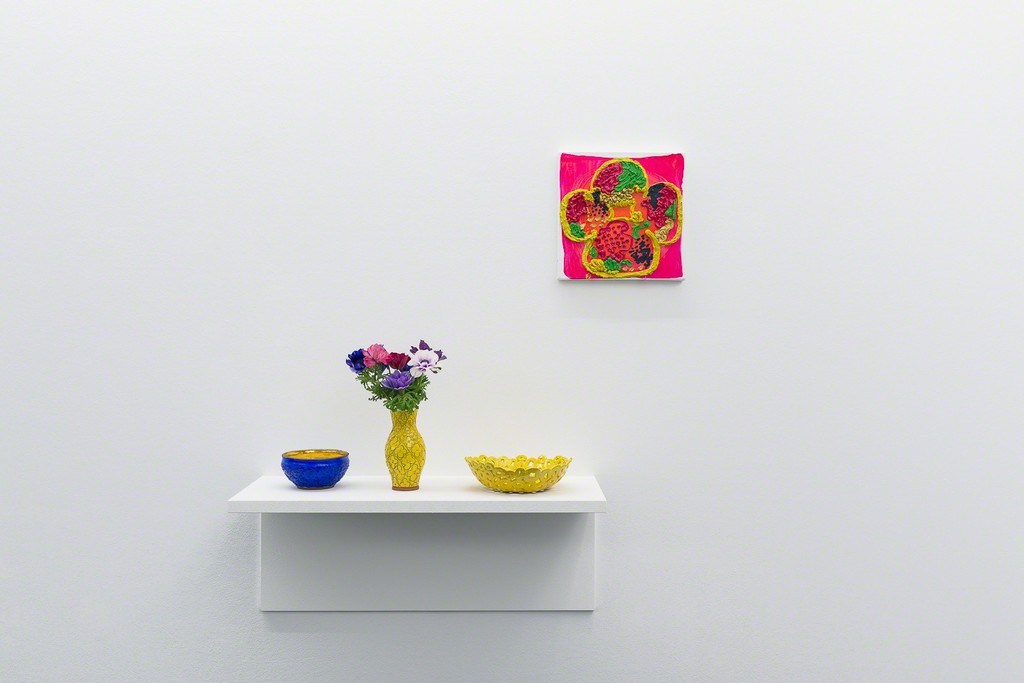 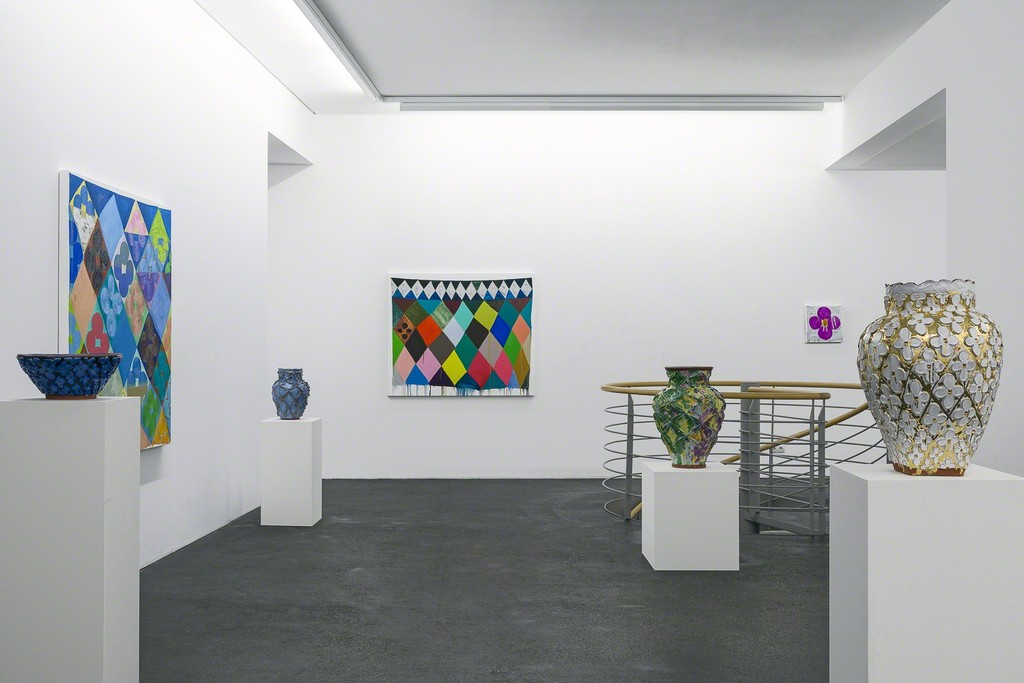 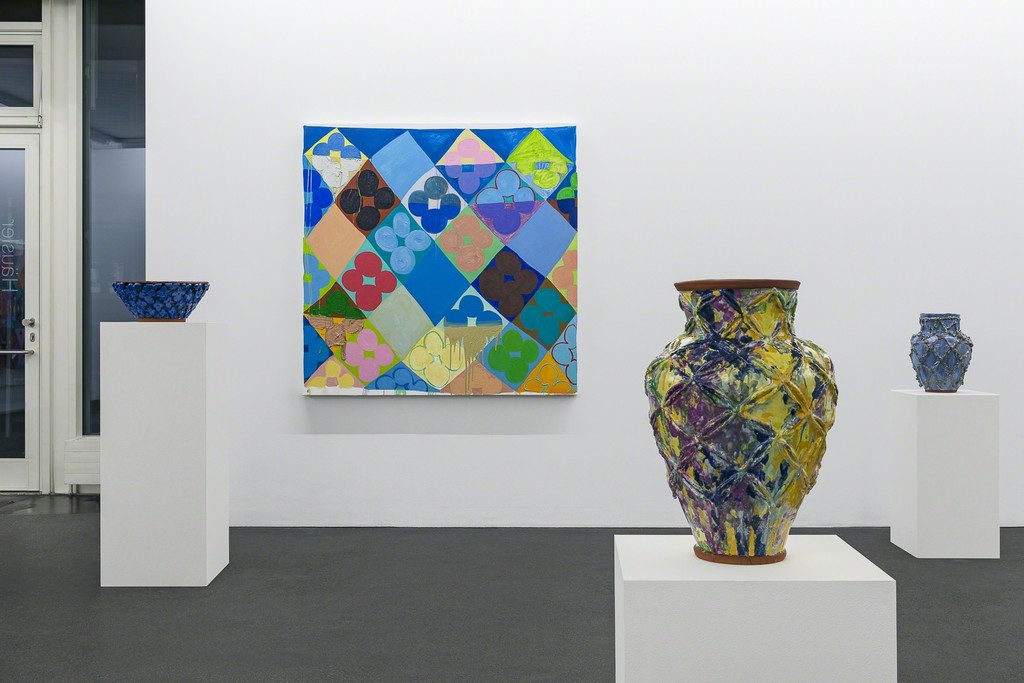 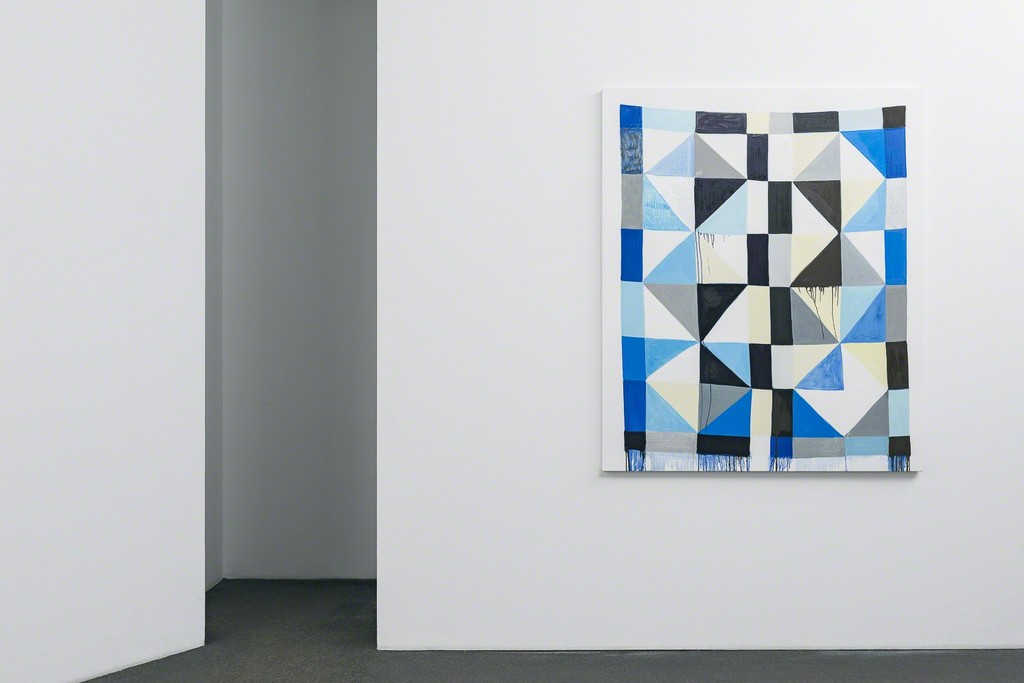 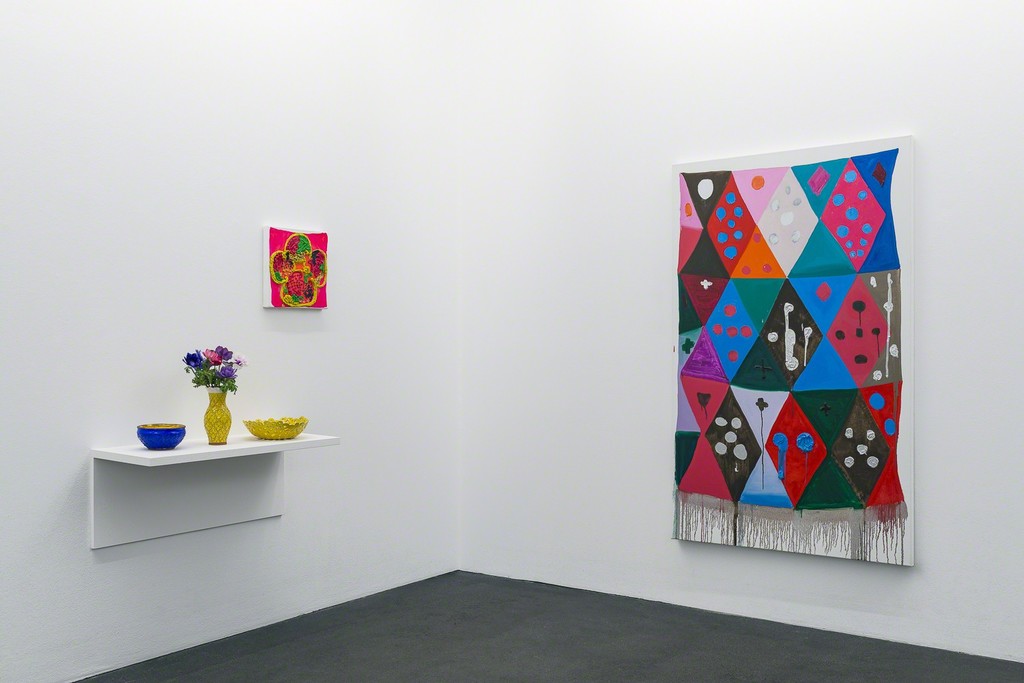 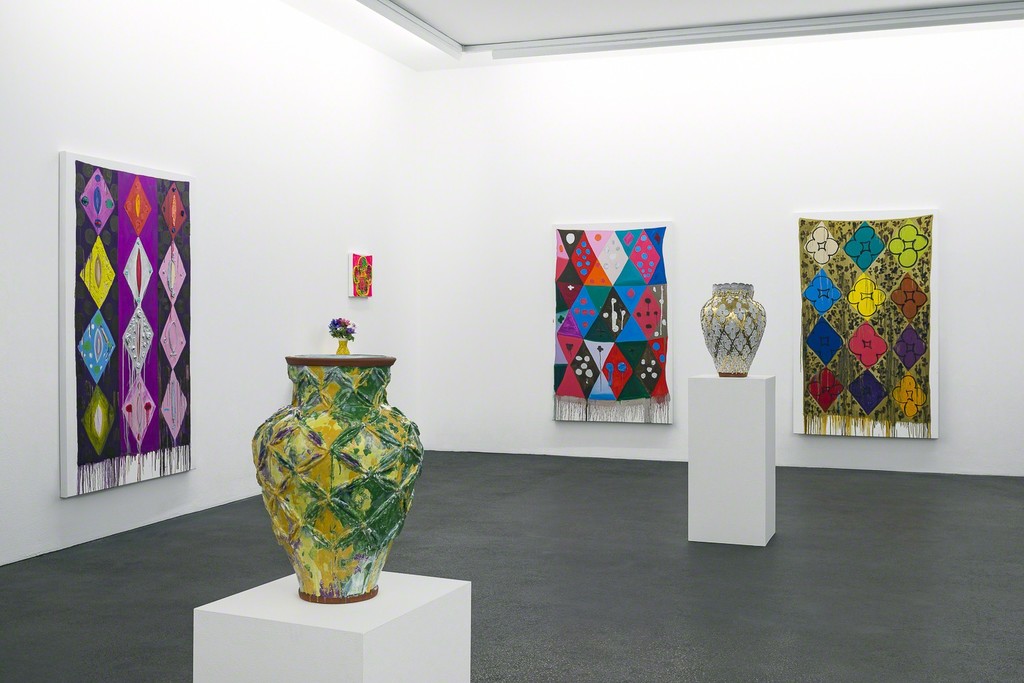 »Patterns are a part of all life – a heartbeat, breathing, sunrise and sunset, but I work to distinguish difference in these patterns of life.« Judy Ledgerwood

Häusler Contemporary München proudly presents for the first time ceramics by Judy Ledgerwood that she developed in 2016/17 at Porzellanmanufaktur Nymphenburg. In combination with recent paintings, the artist’s exhibition again celebrates color, form and ornament – elements with which she simultaneously knits a dense net of symbolic and art historical references.
Like almost no other artistic position, American painter Judy Ledgerwood (*1959, Brazil, US, lives in Chicago, US) shows courage for shiny colors and ornaments. Her canvasses and wall paintings captivate viewers with their rhythmized aesthetics that is full of intentional breaks and contains reflections on femininity just as multilayered art historical references. Furthermore, her works represent a permeable border between fine arts and applied arts. Several residencies at Porzellanmanufaktur Nymphenburg since 2016 now offered Ledgerwood the unique occasion to further pursue her artistic approach in traditional handicraft.
We are delighted to first present at our Munich gallery the results of Judy Ledgerwood’s work stays in Nymphenburg. The vases and vessels she created metaphorically refer to the female body and are adorned with a quatrefoil, diamond or seed pattern. All of these motives also are key elements of Ledgerwoods paintings and means by which the artist introduces a symbolic level to her formally abstract works: according to C.G. Jung, the shamrock-like quatrefoil stands for the four main characteristics of humankind – sensing, feeling, thinking, intuiting – whereas the diamond shape is a universal sign for life and well- being. These patterns were either scratched into the surface or applied to it like reliefs, which reminds of Ledgerwood’s pastose color application in her recent paintings. She also plays with opaque and glazing chromaticity, with a flow or run-downs of the color, which makes the geometrical forms vibrate.

In Ledgerwoods new pictures that are shown alongside the ceramics, these stylistic devices can again be recognized as references to the development of American painting since the 1950s. Ledgerwood thwarts this male-dominated history of art by uniting its techniques with the motives mostly associated with femininity as named above (quatrefoil, seed). Put serially next to each other, they form comprehensive patterns that always are loosened up by irregularities or omissions, since Ledgerwood is not concerned with pure formal aesthetics of repetition. She rather points to the value of subtle differences within the seemingly similar.

Our exhibition thus again visualizes the artist’s ability to master the balancing act between the shapely and the anomaly. With this skill and her unabashed equal treating of »high« and »low art« she creates exciting tension-filled works full of charisma.

Judy Ledgerwood is a professor in Art & Theory at the Northwestern University of Chicago. Her work was exhibited in numerous solo shows in the US and was introduced to the European public by Häusler Contemporary.
Her paintings are part of important collections such as the Metropolitan Museum oft Art, New York, the Art Institute of Chicago, the Museum of Contemporary Art in Chicago and Los Angeles.