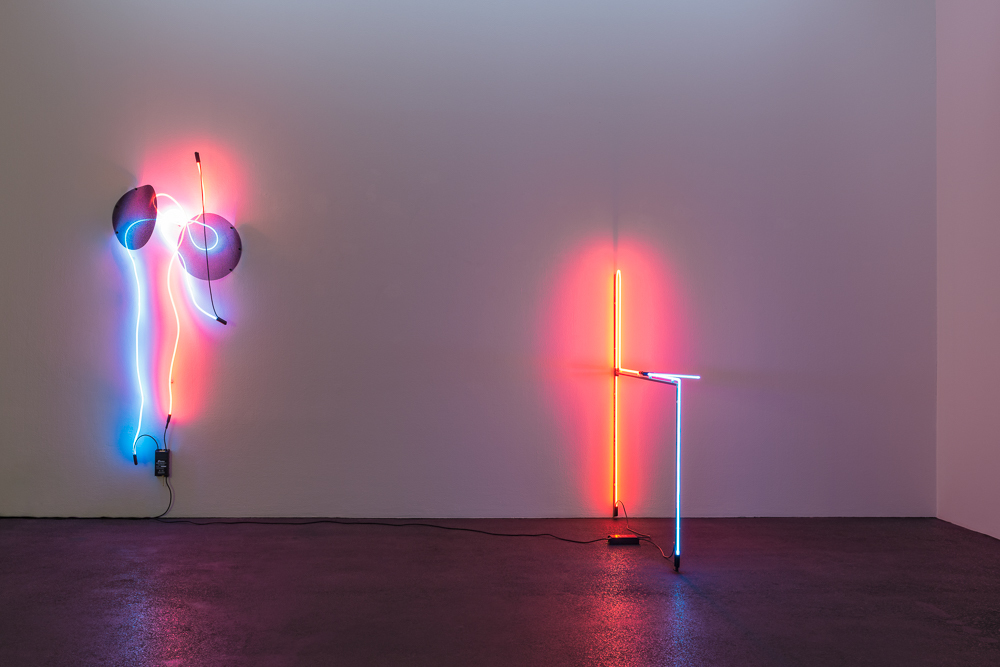 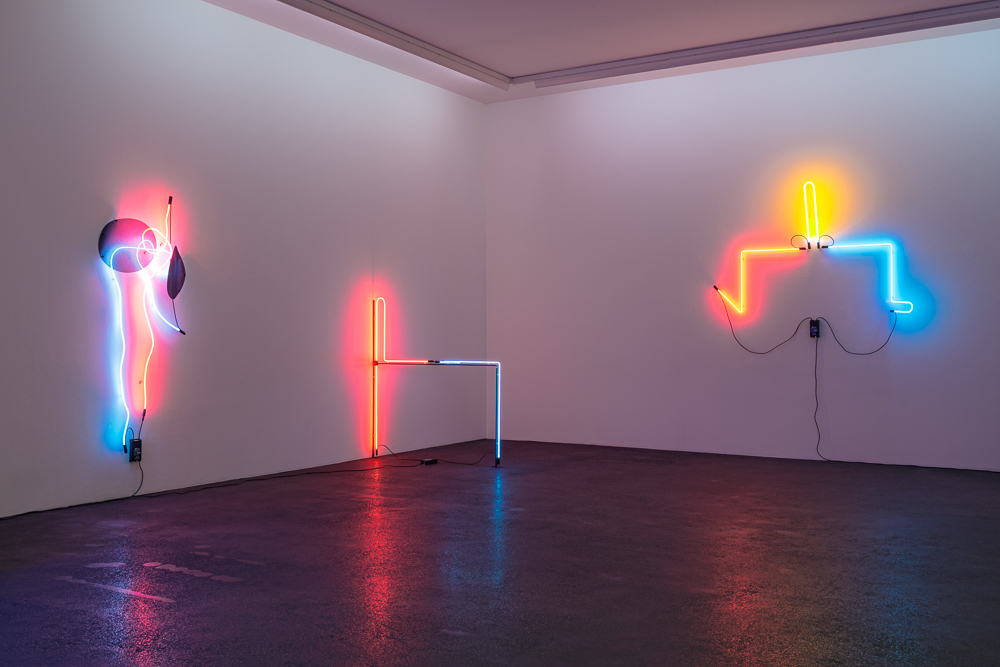 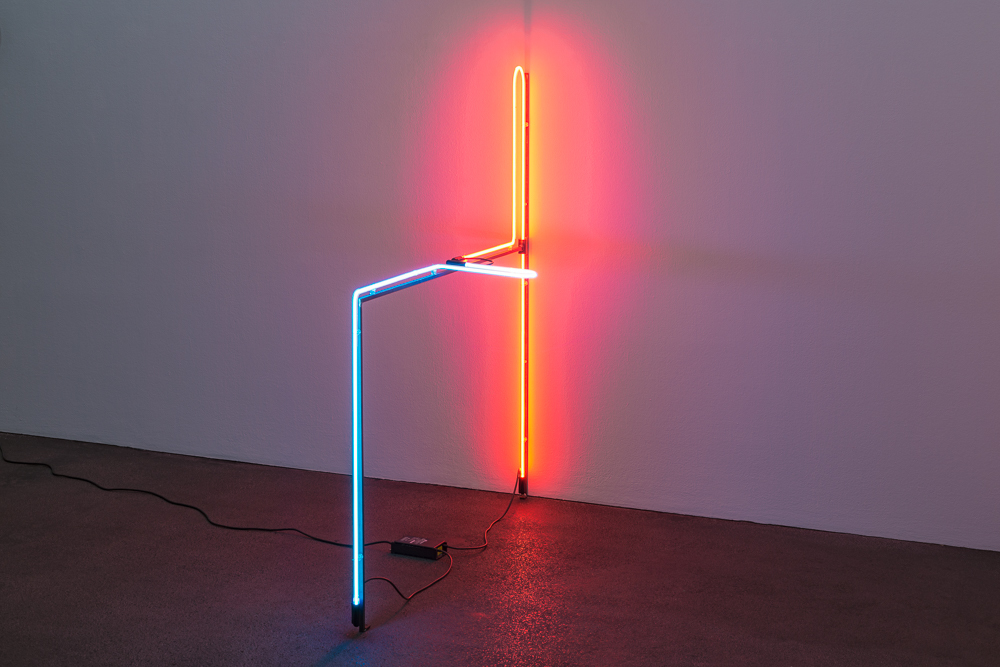 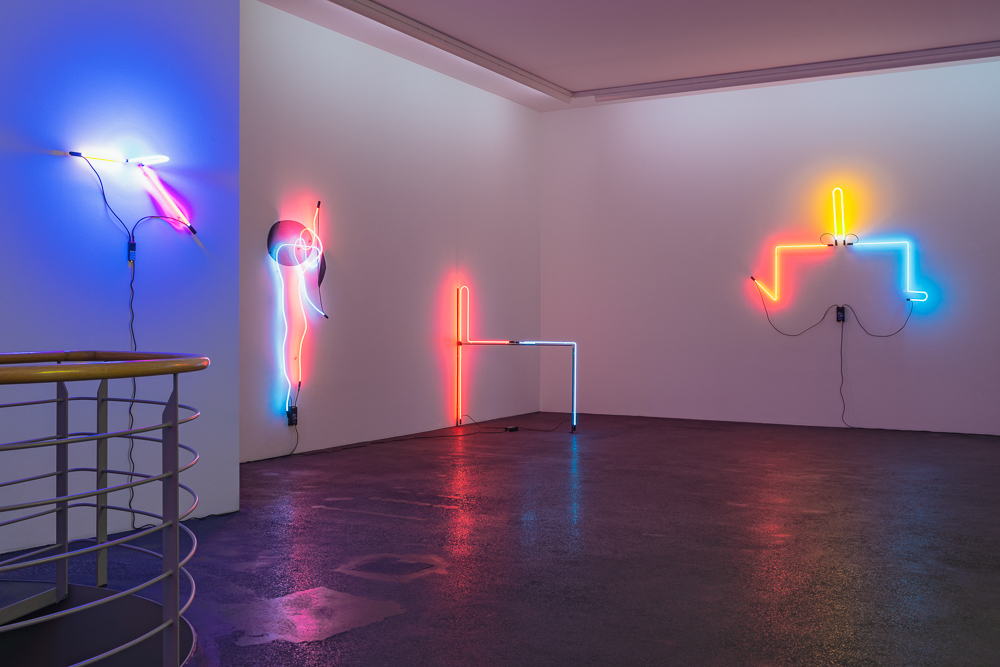 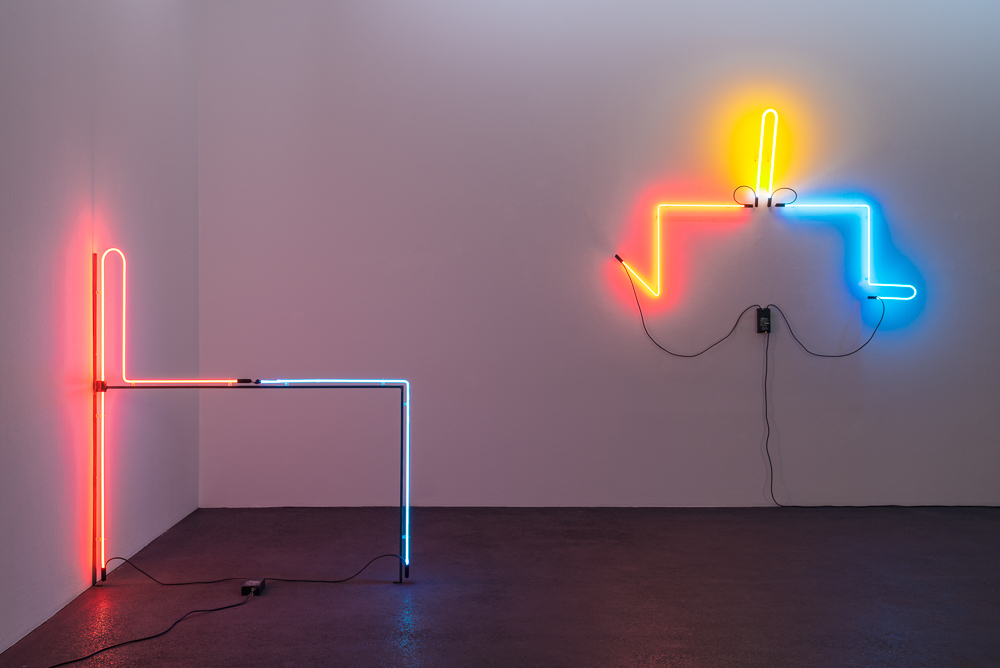 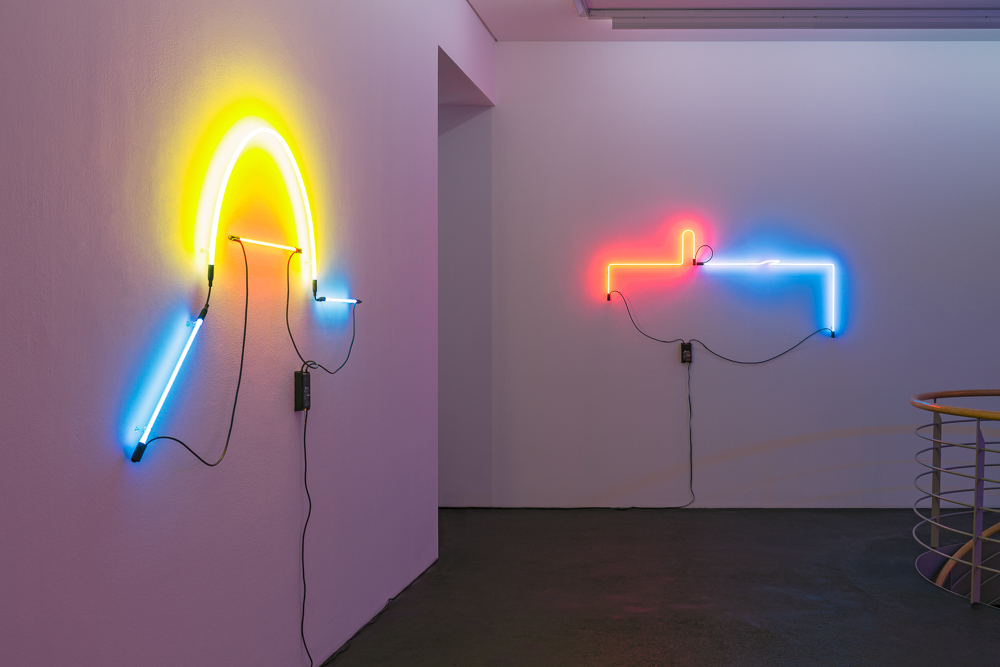 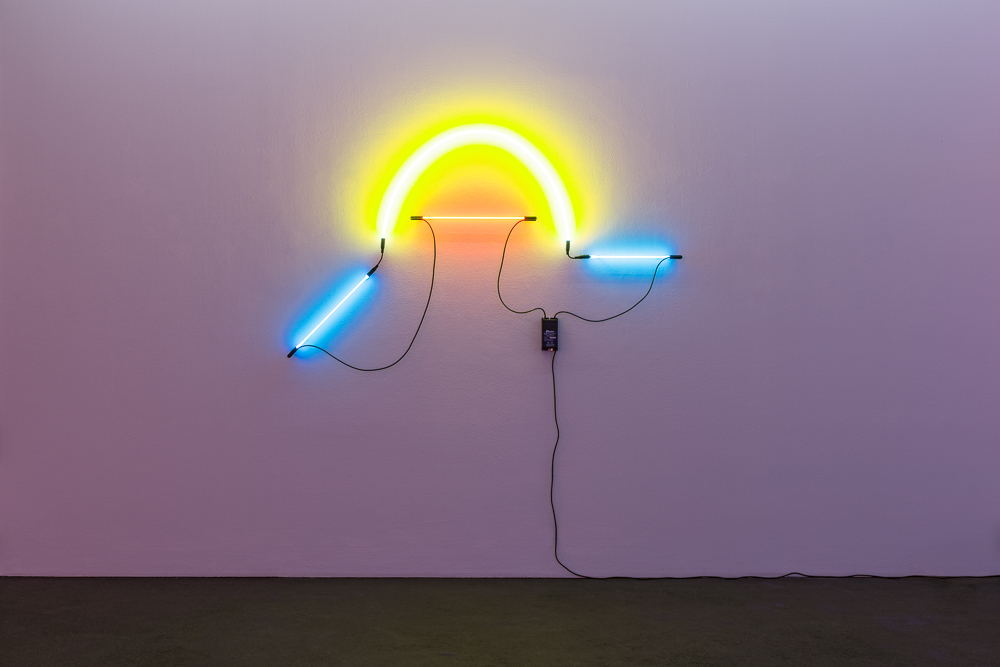 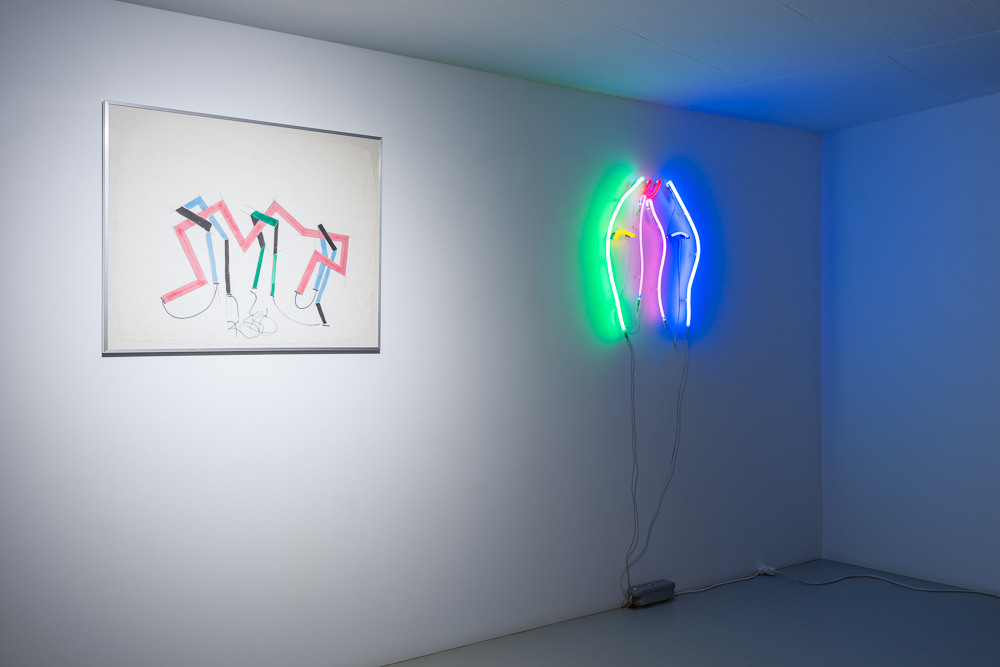 Häusler Contemporary Munich proudly presents the recent work of
internationally renowned artist Keith Sonnier who was among the most
influential sculptors of the Post Minimal period. The »Portal Series«
marks a new phase of formal reduction in Sonnier’s work, whilst at the
same time, making reference to his early career. Our presentation in
Munich runs concurrently with a solo show at our exhibition space in
Lustenau as well as a major survey of Sonnier’s light works at MAMAC
in Nice. Together they provide an overview of the artist’s extensive and
multifaceted œuvre.
The exhibition title »Portal Drone« chosen by Keith Sonnier (*1941,
Mamou, Louisiana) pricks up one’s ears: the public mainly knows the
term »drone« from current media reports that relate it to state-run
observation methods and war tactics. However, the »unmanned spotterand
warplane« is only one specific meaning of »drone«. The concept also
relates to the male honeybee and in everyday language it can mean
»sucker«. Furthermore it designates a monotone buzzing or humming
sound. These variables in meaning in a word that is currently
omnipresent in the media fascinated the artist and motivated him to
explore them further in some of the works in his new »Portal Series«.
The theme of the whole group of work – as suggested by the term
»portal« – is accessing architectural space. Following visually complex
works such as the »Cannes Series« or the »Chandelier Series«,the artist
returns to using neon in the reductive, linear form that brings to mind his
early »Neon Wrapping Neon« and »Dis-Play Series« from 1969. The works
from the »Portal Series« are remarkable in that they are made with a
maximum of three neon tubes, always in the primary colors of red,
yellow, and blue. While the »Drone«works are docked like sensors to the
wall, the »Portals« sometimes expand from the wall to the floor, as
exemplified by »Portal Wall Extension«. All works from the series are
marked by clear horizontals, verticals, and 45 degree diagonals. They
suggest a system of spacial coordinates with rounded protrusions
seeming to point in specific directions. These protrusions can also be
read as elements that penetrate space, adding an erotic connotation to
the pieces that is implicit in many of Sonnier’s works.
Besides the »Portal Series« in our exhibition, the work »Ebo River I« stands
out with its playfully curved neons. The two black, roughly oval plates
that are mounted behind the fluorescent tubes resemble eyes and provide the sculpture with an almost figurative look. This piece is part of another recent series by Sonnier, derived directly from the structure of
Ebola virus cells.
Both series testify to the fact that Keith Sonnier’s work is always a
product of its environment. Sometimes, as is the case with the works on
view, he is inspired by global political events, and at other times by
historic ethnological insights or impressions from personal travels. Both
series show the vitality and freshness of an artist whose creative work
spans more than fifty years and whose approach was instrumental in
giving a new definition to the notion »sculpture« in the 1960s. His radical
early works included the use of non-traditional materials such as glass,
rubber, latex, and finally neon light, combined in such a way as to
emphasize their sensual and emotional qualities. He is still addressing
these same issues in his work today.
A small overview of the breadth of Sonnier’s œuvre can be seen currently
at our exhibition space in Lustenau (AT). Furthermore, from June 13 to
November 29, 2015, the MAMAC in Nice (FR) will present a major survey of
his light generated works that he is well known for in Europe.
Deborah Keller, Häusler Contemporary
Keith Sonnier had his first solo show at Museum of Modern Art in New
York as early as 1971. Furthermore he was part of the seminal exhibitions
«Eccentric Abstraction» (1966, New York) and «When Attitudes Become
Form» (1969, Bern). For the Millennium 2000 the Kunsthaus Bregenz
arranged a comprehensive solo exhibition of the artist’s work since the
1960s. Currently, the MAMAC in Nice presents a major survey of Sonnier’s
light generated work.
The artist has realized several projects of art in architecture, such as
»Light Way« at Munich International Airport (1990-92), and, in
cooperation with Häusler Contemporary, the installation »Tears for St.
Francis« at the Franziskuskirche in Steyr (2002).