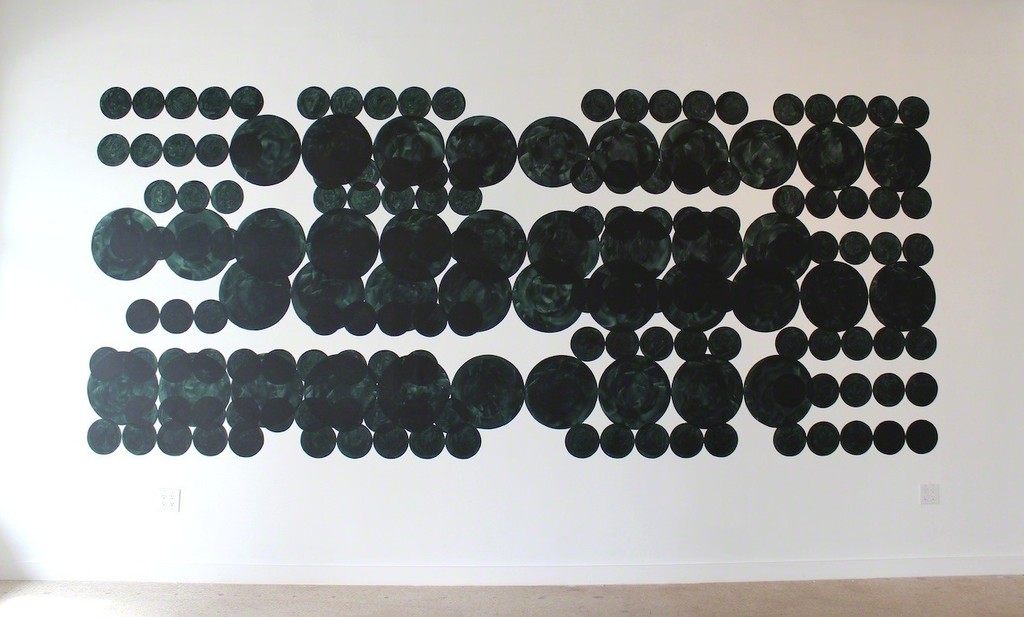 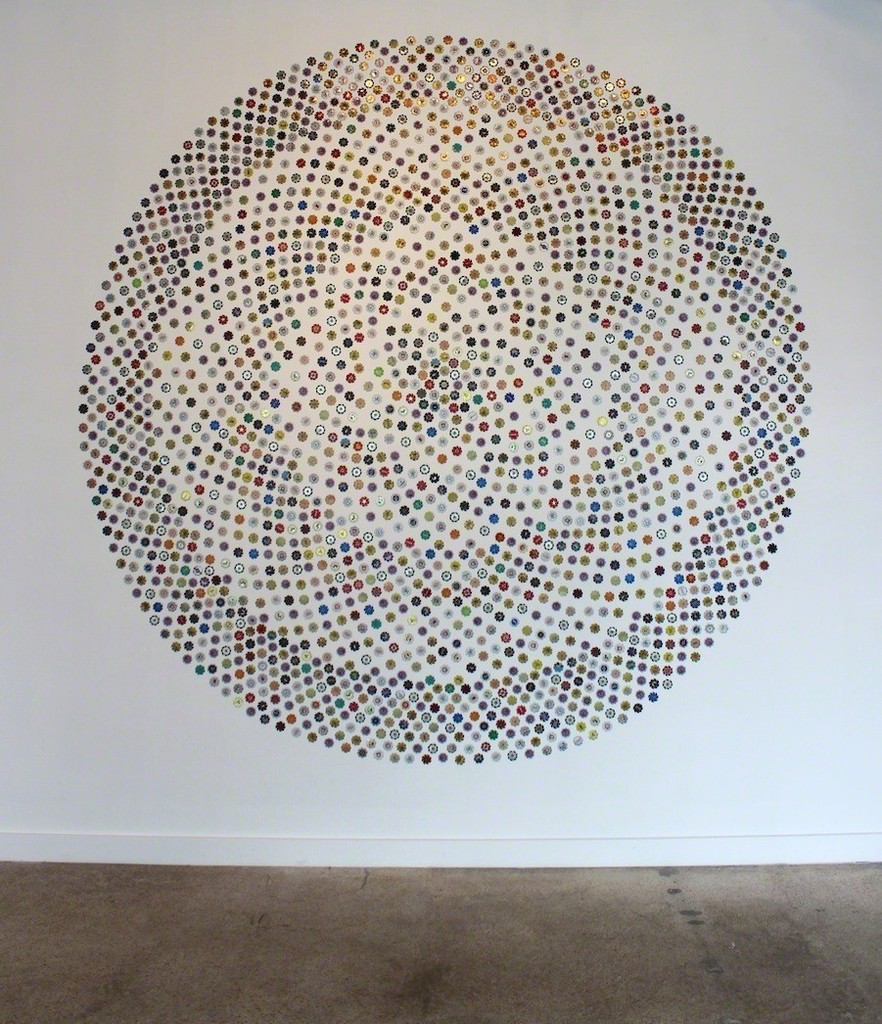 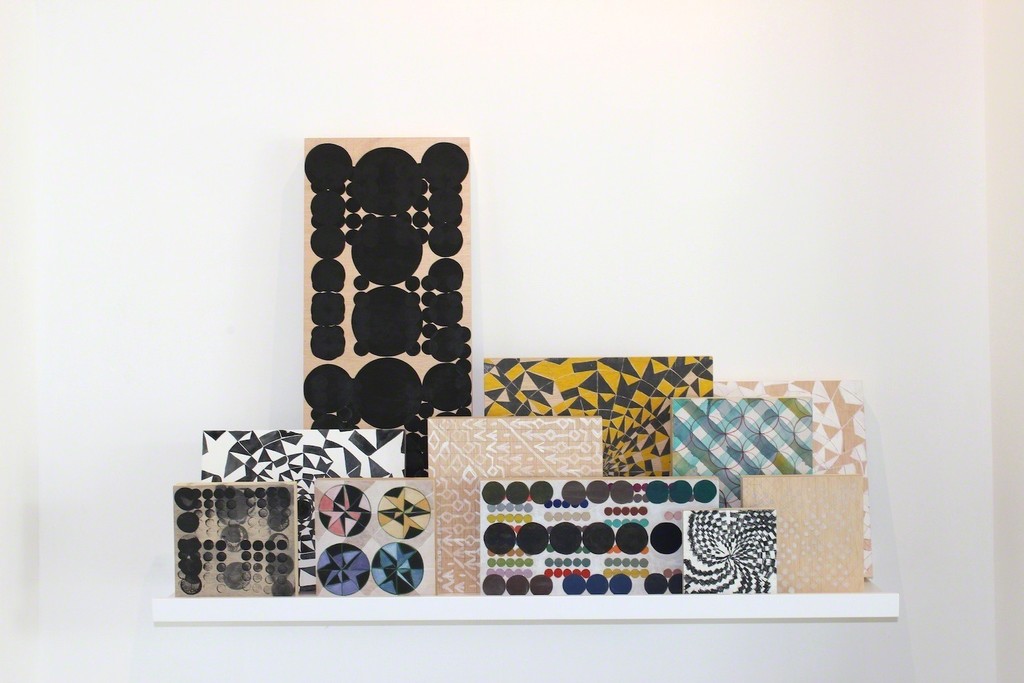 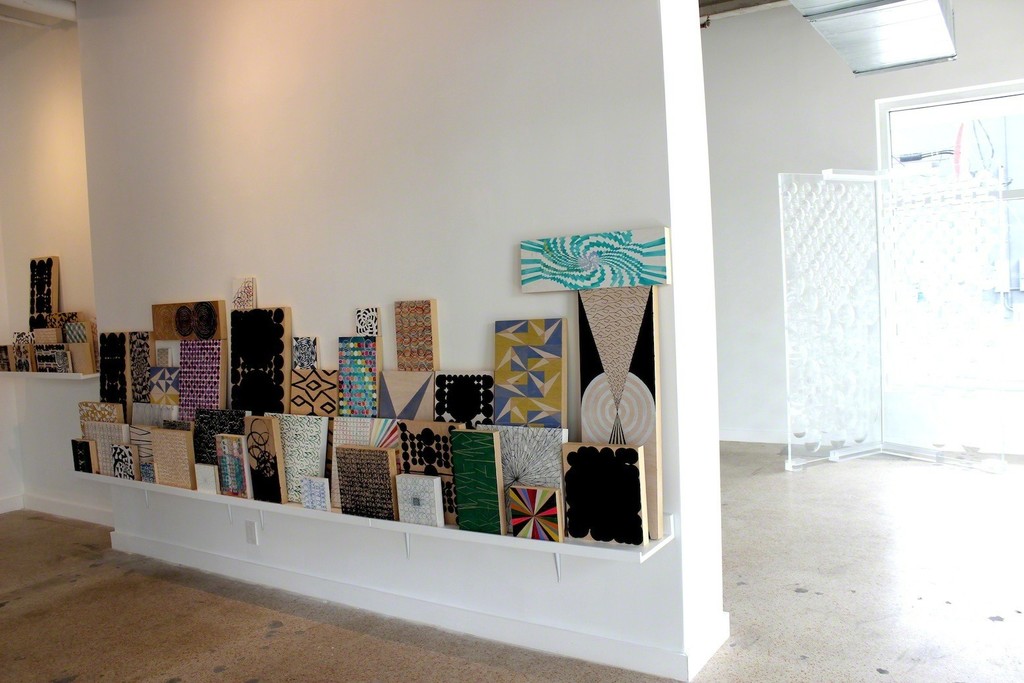 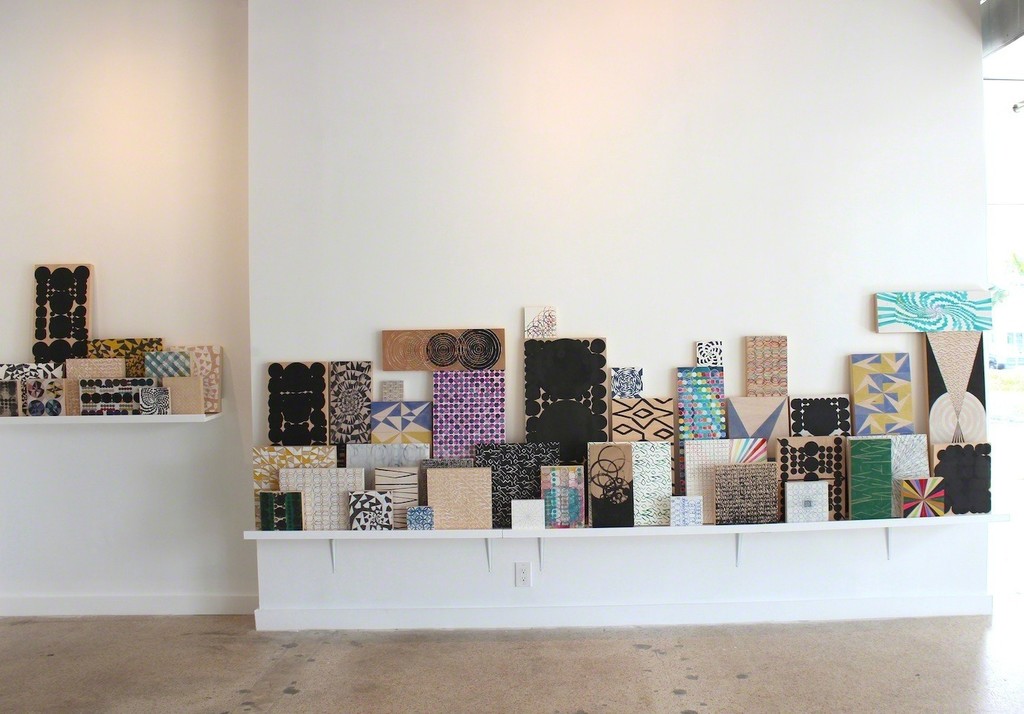 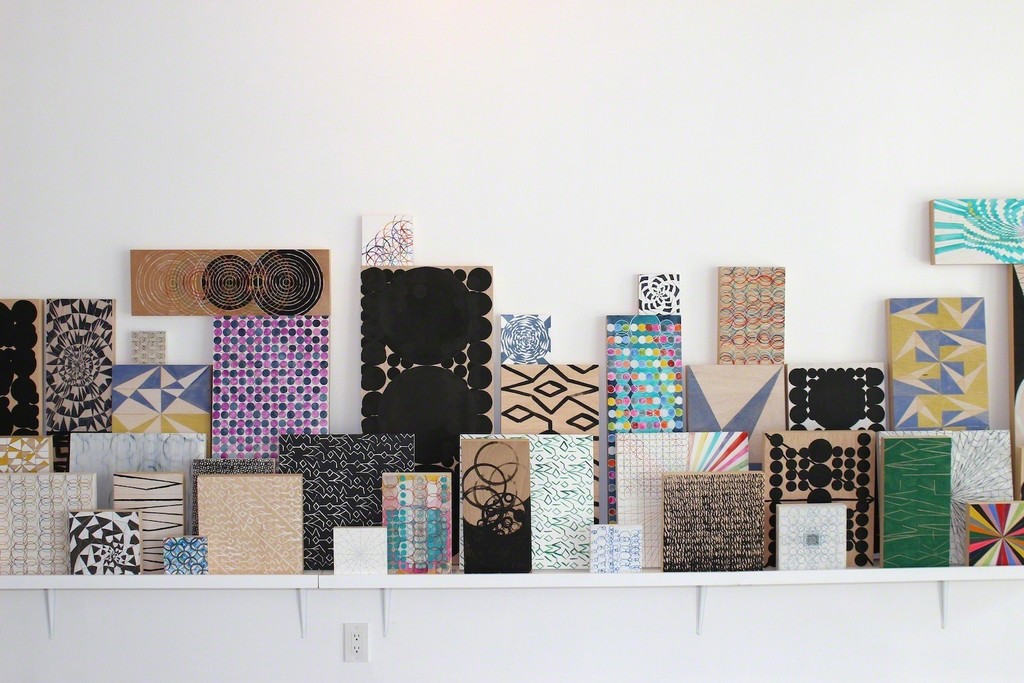 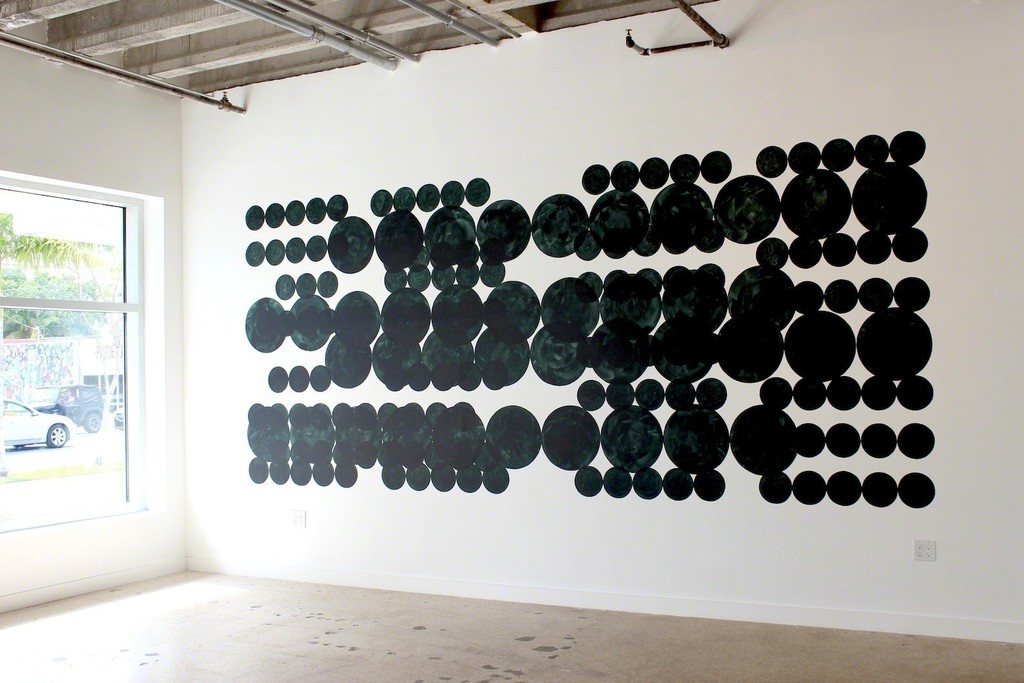 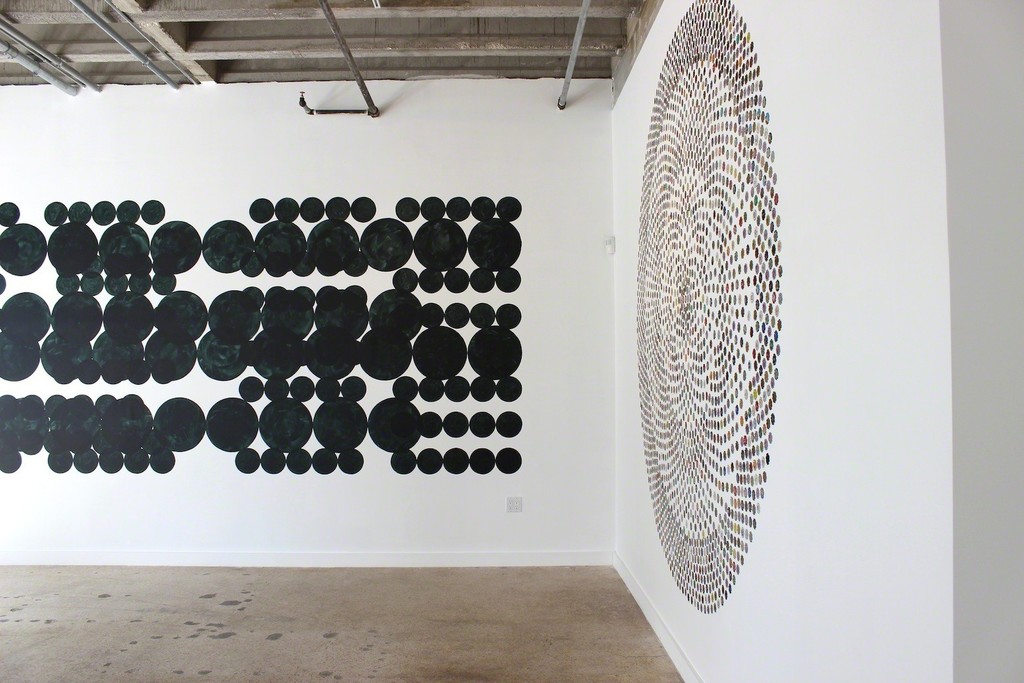 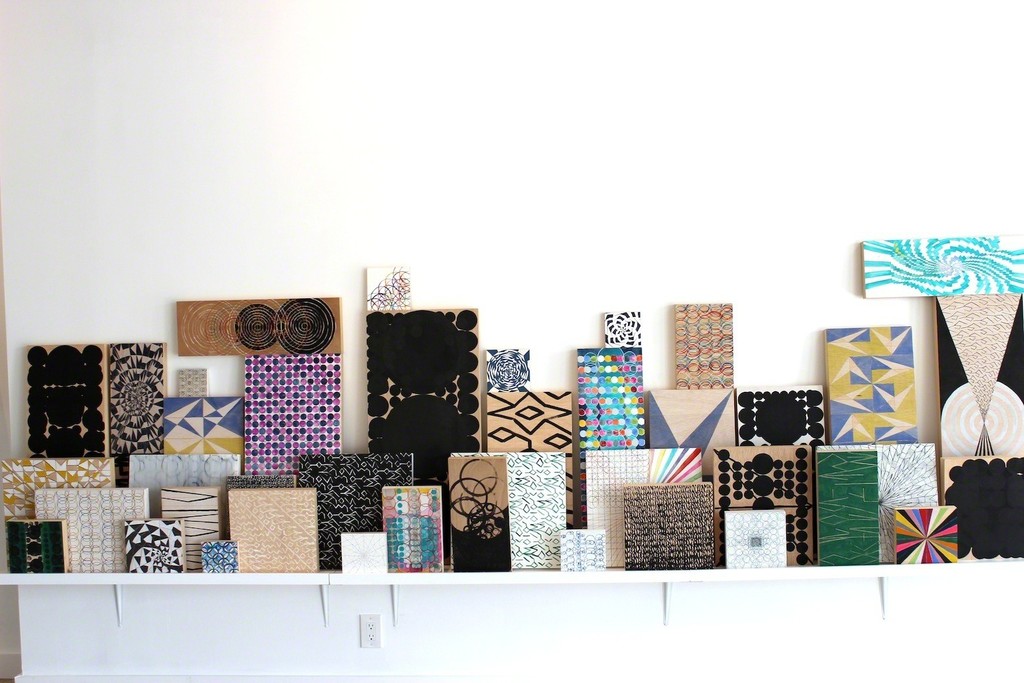 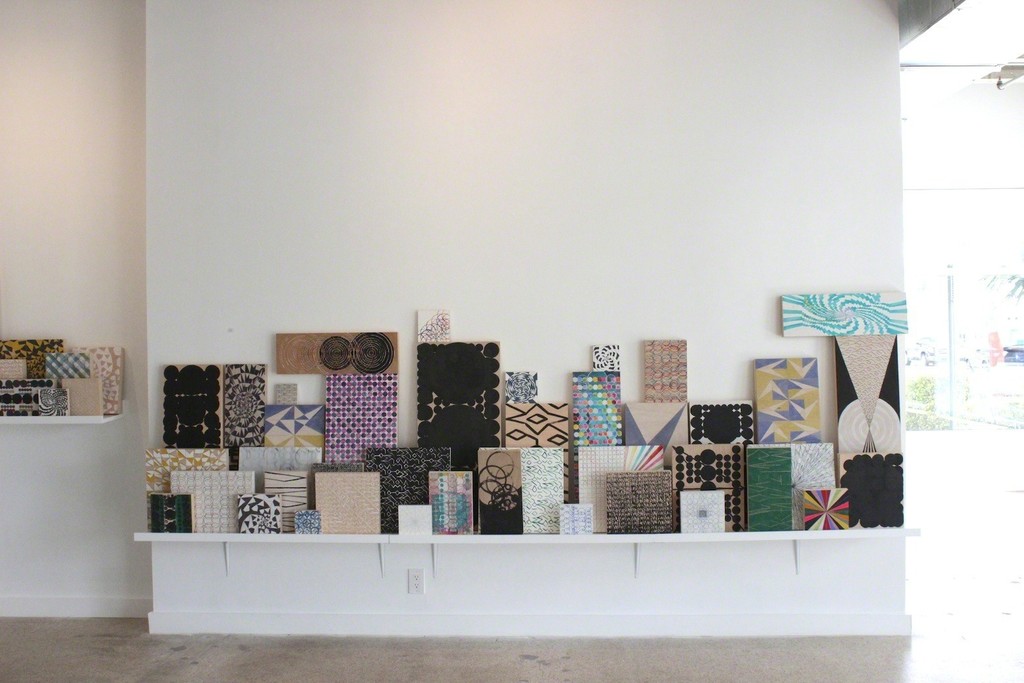 Miami Biennale is pleased to present Full Emptiness, Emilia Azcárate’s first exhibition at the foundation. Her works on paper, canvas and board, present unique forms of conceptualizing and synthesizing her spirituality and artistic practice. The installations shown in the gallery space highlight color, concentric compositions and forms of calligraphy and serve as a visual counterpoint to the permanent installation of James Turrell’s Coconino (2007). The disciplines of Azcárate’s meditation practice carry her through her art making, providing a structure that allows for the blurring between internal reflection and participation in the frenetic activity of contemporary society.
Azcárate’s mandalas are one such example. The mandala has been used for millennia in Hindu and Buddhist iconography as a means of centering the practitioner, aiding in concentration and meditation. The geometric patterns found within them are meant to resemble a microcosm of the universe and to transcend the finite boundaries of space and life by signifying the limitlessness of the mind and the cosmos. In this context, Coconino can be seen as a modern such mandala. As Turrell explains, “My work has no object, no image and no focus. With no object, no image and no focus, what are you looking at? You are looking at you looking. What is important to me is to create an experience of wordless thought.” The mandalas that Azcárate creates are composed of discarded bottle caps foraged from the streets of the cities she visits. Bearing the names of the cities in which they were generated, the mandalas are contemporary microcosms that represent the inclinations of their constituents. The mandalas are mounted according to the creative and intuitive processes that guide Azcárate’s wanderings through urban neighborhoods-each experience is a unique interaction. The exhibition will feature Azcárate’s newest mandala, Miami (2016), with bottle caps collected through a collaborative effort between the artist and city residents.
The “Gohonzon” is used in Nichiren Buddhism and takes the shape of a scroll inscribed with Japanese and Sanskrit characters that embody the principles of Nam-myoho-renge-kyo, which is the life state of Buddahood inherent in all people. In her series Gohonzon (2013-present) Azcárate builds on the circular forms of the scroll by abstracting them and layering stark monochromes and concentric patterns. With the Gohonzon occupying a place of high importance in Nichiren Buddhism and meditation, these works offer an insight into the artist’s spiritual, aesthetic and conceptual interpretation of this complex object of devotion and its primacy in her Buddhist practice. The Practicables series (2012-present) is also structured around the prominence of the circle but is dedicated to the physical acts of continuous spiritual practice and the varied emotions and gestures that comprise it. This sense of engagement, set forth by Azcárate, is completed by the requirement for viewer interaction with the Practicables. Placed on an open shelf instead of being hung on a wall, the individual paintings can be rearranged and manipulated to create new compositions, allowing the viewer to become involved with the works on a personal level.
In Full Emptiness, one can see how profoundly Azcárate has integrated her spirituality and art into her everyday life. As experienced through her mandalas, which involve meditative practices in the urban environment, as well as her Practicables and Gohonzon series, which invite the spectator to participate in her conceptual and creative forms of materializing her spiritual practice, Azcárate demonstrates how she bridges these very different worlds. Through these connections we too can appreciate the subtleties between internal and external, between the material and the spiritual.
True to Miami Biennale’s mission of providing Education through Art, a gallery talk will be held during the course of the exhibition.
Emilia Azcárate (Caracas, 1964) studied Fine Arts at the Central Saint Martins School of Art in London in the eighties. She participated in La Llama International Artists Workshop in Venezuela and in the CCA7 artist-in-residency program in Trinidad. She won the first National Prize for Visual Arts Arturo Michelena in 1999, in 2006 she was awarded the Cisneros Fontanals Foundation Grant Program (CIFO), and in 2016 she participated in the Latin American Roaming Art (LARA) Residency Program in the Galapagos Islands, Ecuador. She lives and works in Madrid.
Azcárate has had individual exhibitions at Henrique Faria Fine Art, New York; Distrito 4 Gallery, Madrid; Faría+Fabregas Gallery and Periférico Caracas, Caracas; Casa de America, Madrid; Caribbean Contemporary Arts 7, Port of Spain; Alejandro Otero Museum and Sala Mendoza, Caracas; and the Centro Cultural de España, Santo Domingo, Dominican Republic. She has also participated in numerous group exhibitions and biennials, in institutions such as MDE 15, Encuentro Internacional de Arte de Medellín; the Museo Nacional de Bellas Artes, Havana; Centro Atlántico de Arte Moderno, Las Palmas de Gran Canaria; Americas Society, New York; Museo de Arte Moderno Cuenca, Ecuador; São Paulo Biennale; Prague Biennale and the Havana Biennial.
Her work is represented in various collections including the Sayago and Pardon Collection, Los Angeles; Cisneros Fontanals (CIFO) Collection, Miami; Colección Patricia Phelps de Cisneros, New York; Museo Alejandro Otero, Caracas; Banco Mercantil Collection, Caracas; Berezdivin Collection, Puerto Rico; Museo de Arte Contemporáneo, Caracas; Banesco Foundation Collection, Caracas; Bank of Spain Collection and Coca Cola Foundation, Madrid.