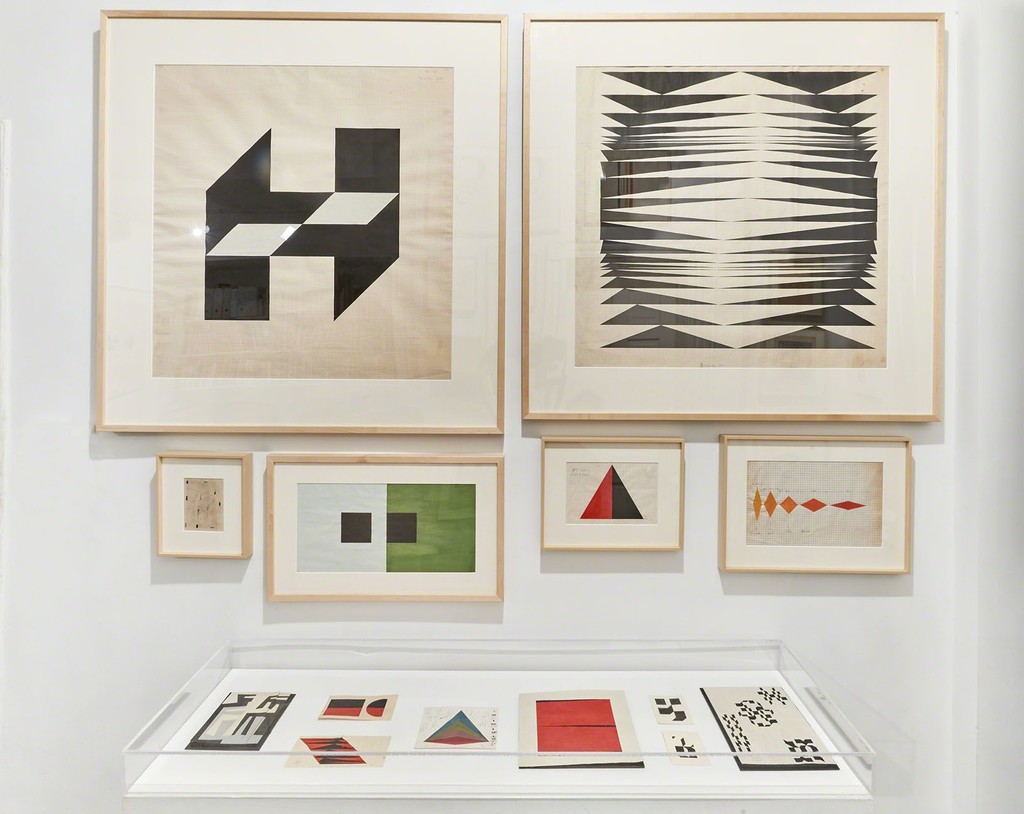 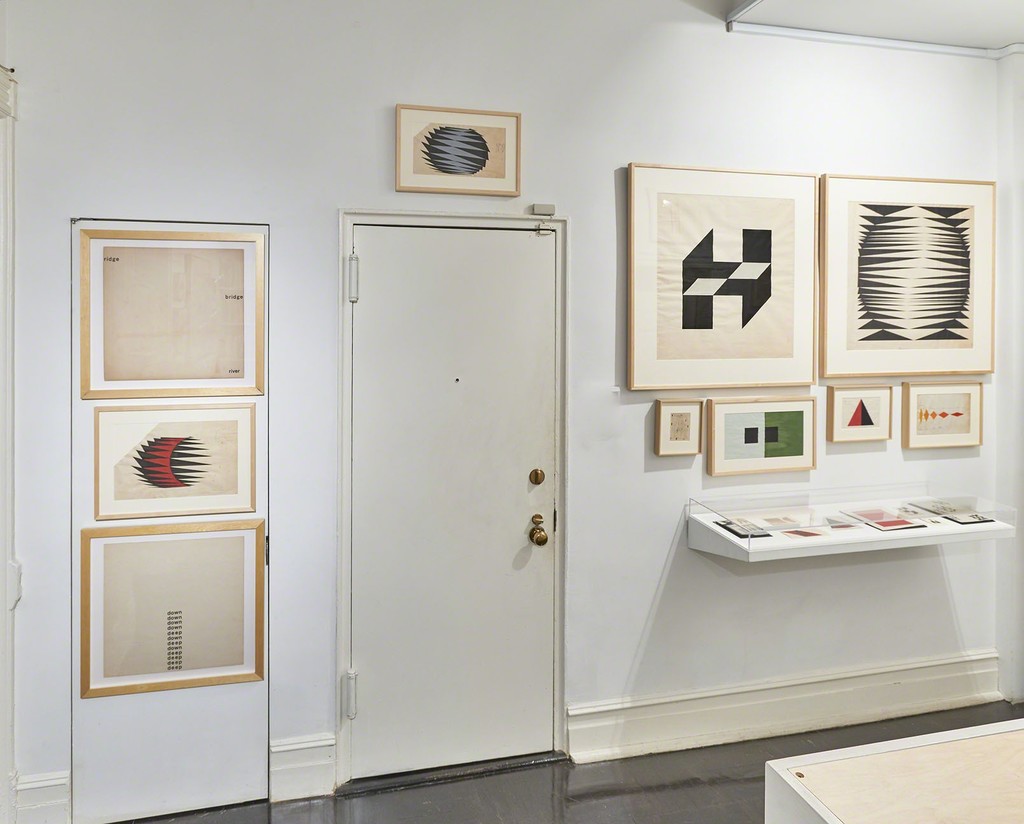 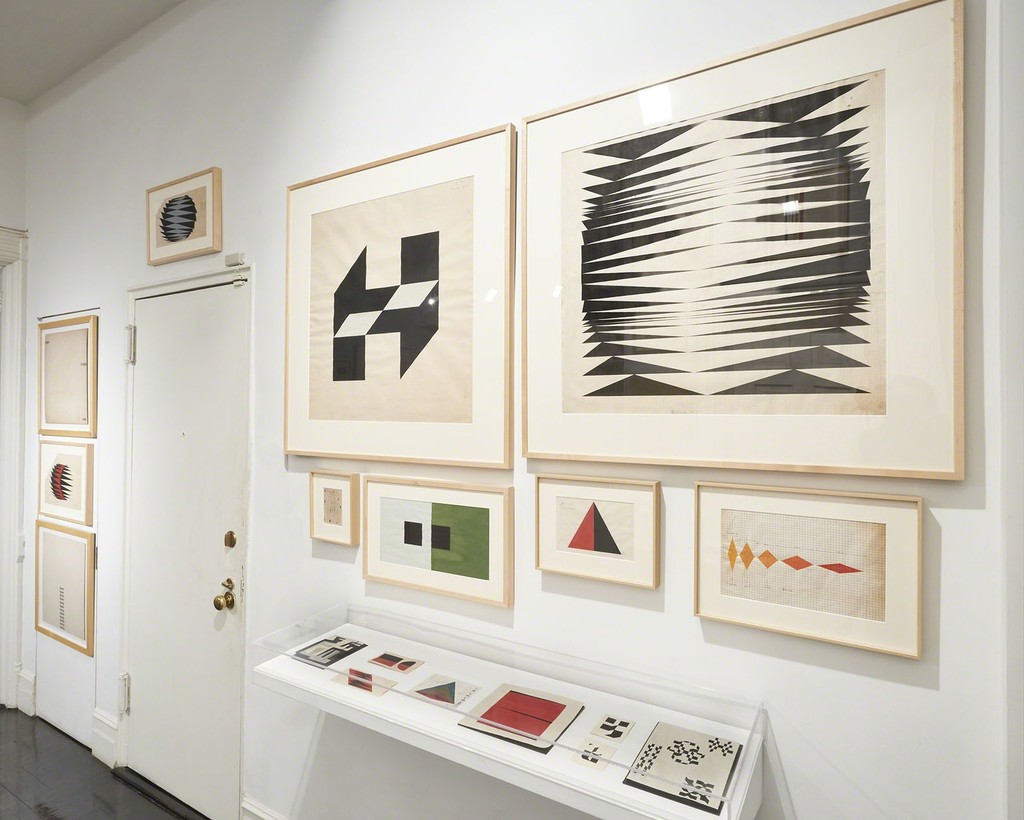 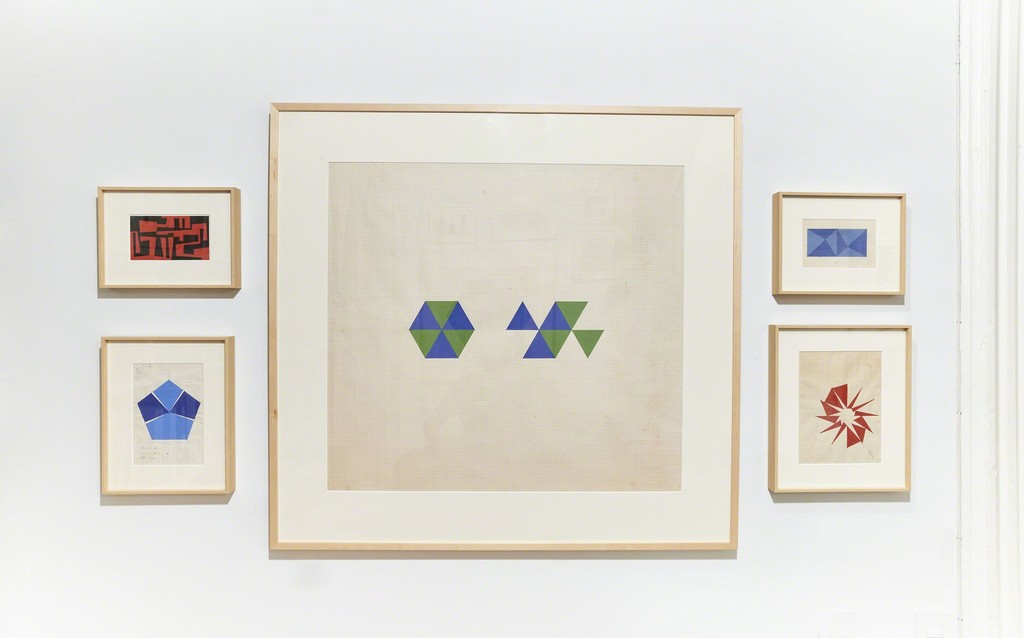 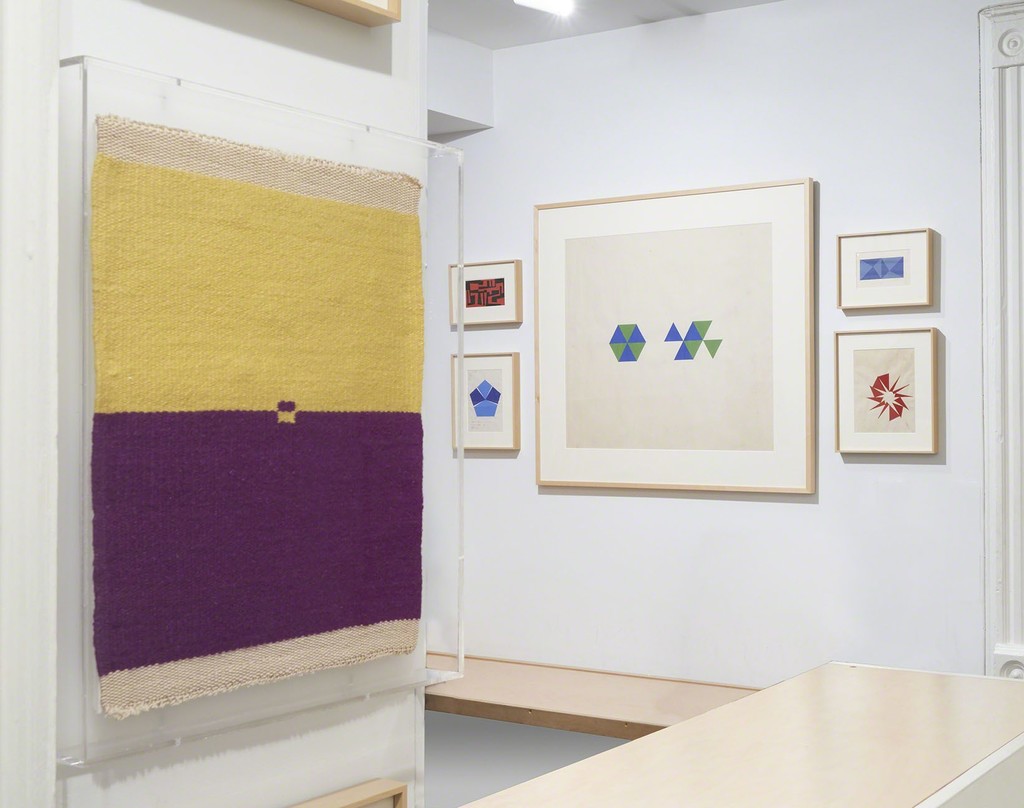 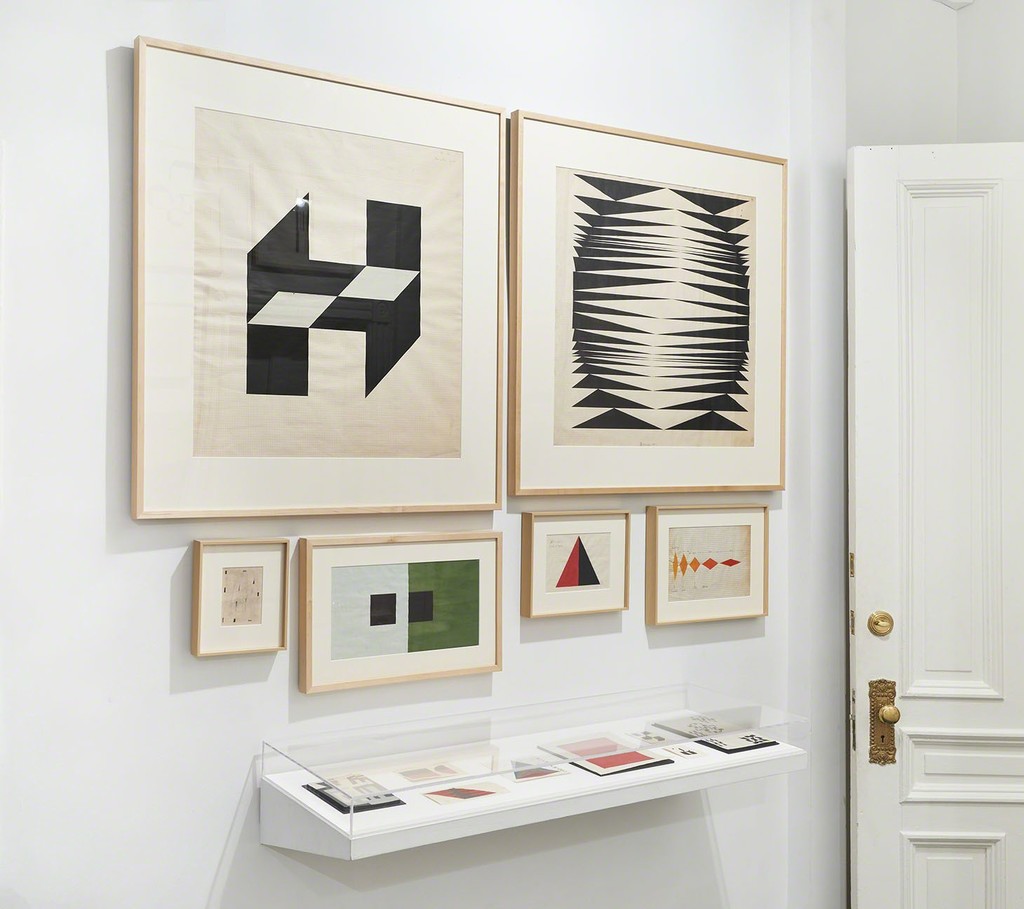 Henrique Faria Fine Art is pleased to present a selection of works by Modern masters Willys de Castro (1926-1988) and Hércules Barsotti (1914-2010) in honor of Master Drawings Week 2018 in New York City. The artists were not only lifelong friends but were also creative partners, having founded together, in 1954, the Estúdio de Projetos Gráficos
where they worked for ten years on projects varying from logos, textiles, jewelry and furniture design, and graphic design for magazine spreads. The artists’ inclusion into the Grupo Neoconcreto in 1959 allowed them ample room for exploring new territories in their practices and expanding the rationality imposed by geometry and mathematics to better express the complexities of the human experience.

De Castro was involved with cinema, music, poetry and theater from a young age, and though began to focus solely on the visual arts in 1957, he still allowed his previous interests to influence and shape a new direction in his work. Looking at the planar nature of the sheet of paper, he examined the constructive possibilities of color and shape that would allow him to play with two-dimensionality. In his groundbreaking studies and designs for paintings, such as Estudos para pintura (1957-58) and Projecto para pintura 167 (1956), he demonstrated how the coloring and placement of the figures and ground can create a sense of movement that pervades the whole work. From here grew his interest in the ‘active object’, seen in the work Estudo para objeto activo (c. 1959), and how an artwork could arouse in the viewer a phenomenological awareness. The Cartaz-poema series (1959) incorporates his exposure to Neo-Concrete poetry by treating words as modular units, which have been freed from the linear succession of the traditional verse and spaced out across the page.

Barsotti, on the other hand, arrived at art making after a short career as a chemist, but retained a strong affinity towards research and precision. He approached space and geometry by placing shapes in such a way across the page that he was able to construct, reconstruct, and deconstruct space, as well as create relationships between containing and contained shapes. In untitled gouache on paper works from the 1950s, Barsotti superimposed shapes of different colors on top of one another creating visual tension not only between colors, but also between angles and lines. In these works, for example, a diamond is not just a diamond: its form also circumscribes triangles and parallelograms that both provide structure and challenge optical perception. Barsotti also utilized shapes as modules, using repetition and slight modification to evoke movement across the page and demonstrated the evolution of the configuration.

It is an important moment to be presenting the work of Willys de Castro and Hércules Barsotti during Master Drawings Week as these artists were never exhibited together in their lifetimes. Their strong relationship is clearly reflected in their artwork as seen in their commitment to portraying space, shape and color – the elemental components of sight – in a manner that evokes curiosity, expression and a freedom of form. Seen side by side, the art of De Castro and Barsotti are here given the opportunity to interact, and thereby to give one another new life.

Willys de Castro (Uberlândia, Minas Gerais, 1926 - São Paulo, 1988). was a painter, engraver, draughtsman, scenographer, costume designer and graphic artist. In 1950, he began an apprenticeship in graphic arts, executing his first abstract-geometric paintings and drawings. In 1958, he went to study in Europe, and in the following year upon returning to Brazil, he joined the Grupo Neoconcreto (Neo-Concrete Group) in Rio de Janeiro. Between 1959 and 1962, he worked on the Objetos Ativos (Active Objects) series, which explore plane and volume as plastic elements, questioning the use of the canvas as a support for pictorial language. His work is included in important collections such as Instituto da Arte Contemporanea, Pinacoteca do Estado de São Paulo, and Museo de Arte de São Paulo, Sao Paulo; The Museum of Modern Art and Colección Patricia Phelps de Cisneros, New York.

Hércules Barsotti (São Paulo, 1914-2010) studied painting at the Liceu de Arte e Officios in São Paulo from 1932 to 1934 before graduating from the Mackenzie Institute in 1937 with a degree in Industrial Chemistry. He co-founded the Estúdio de Projectos Gráficos along with Willys de Castro in 1954 and then they both joined the Grupo Neoconcreto (Neo-Concrete Group) in 1959. The Multileturas opcionais (Optional Multiple Readings) and the Concentracoes interligados (Interlinked Concentrations) of 1974 exemplify Barsotti's visual strategy with the use of superimposed triangles, color and volumes to create multiple pictorial planes and emphasize the extremities of the canvas. His work has been exhibited internationally at institutions such as the Museu de Arte Moderna, São Paulo; Museo de Arte Moderno, Mexico City; the Royal College of Art, London; and the Centro de Arte Moderna José de Azeredo Perdigão, Lisbon.