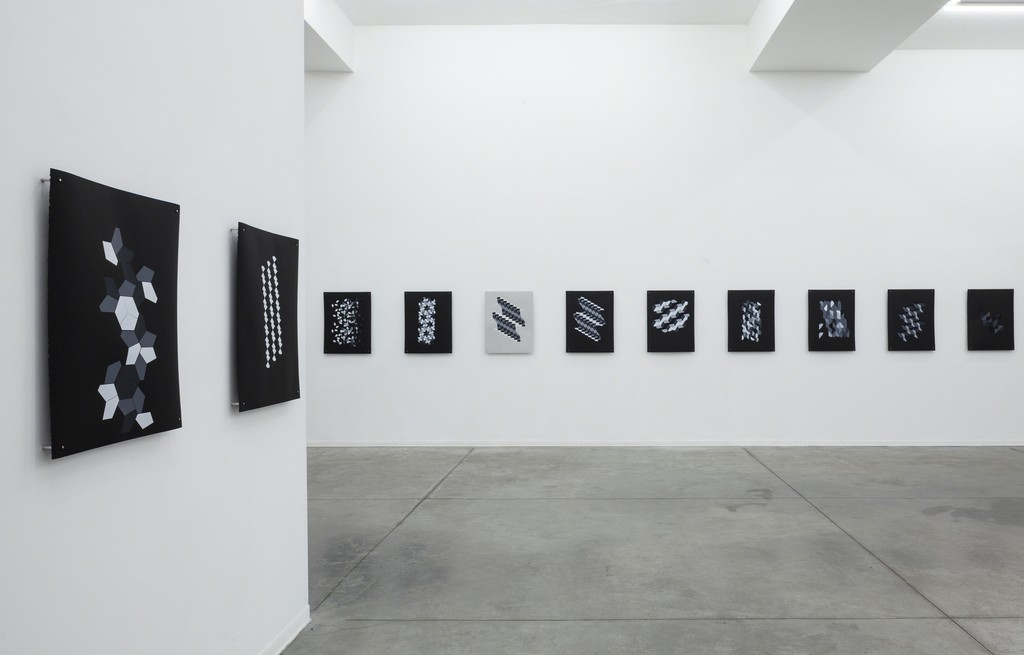 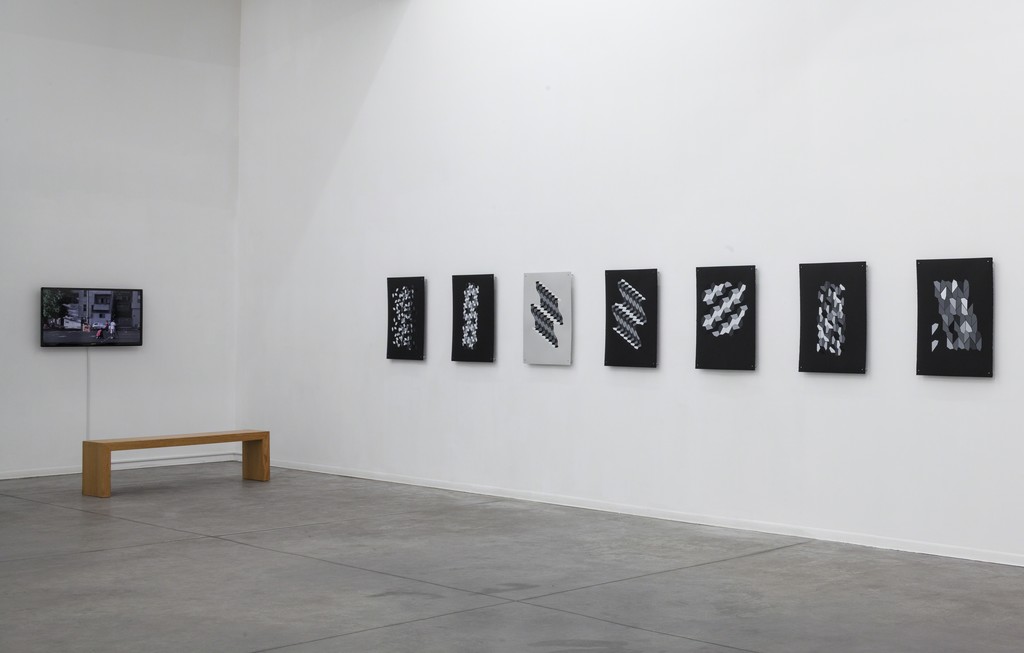 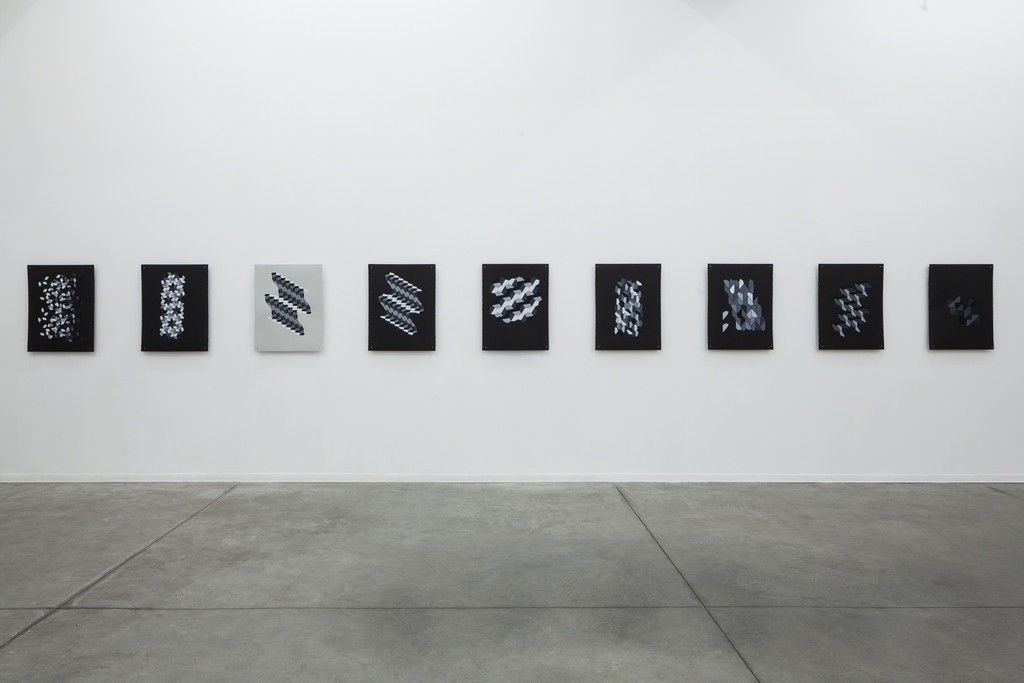 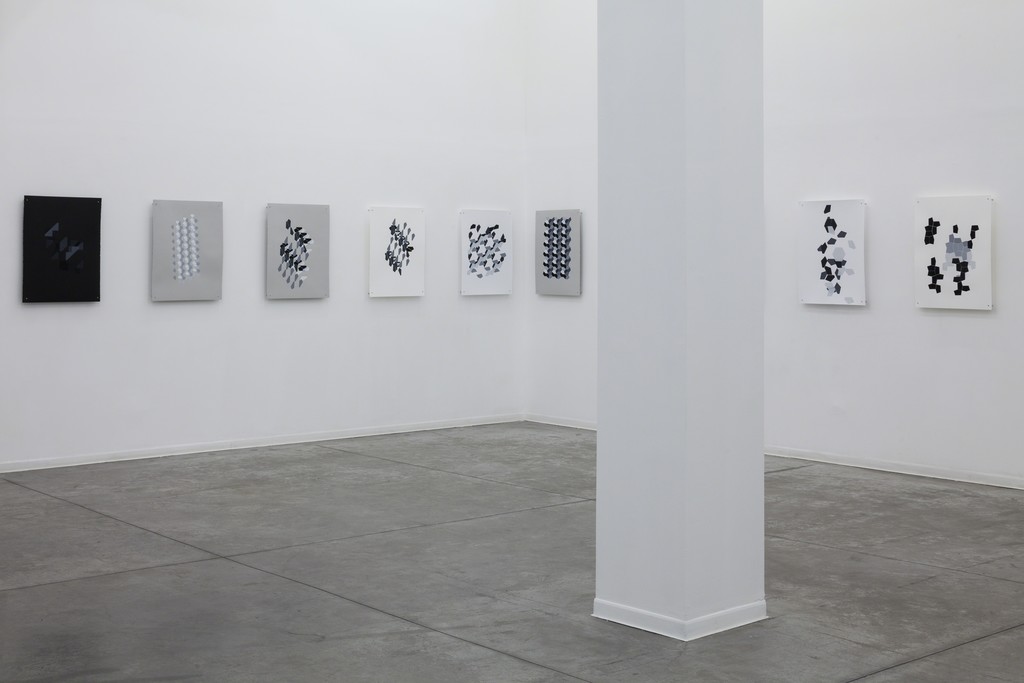 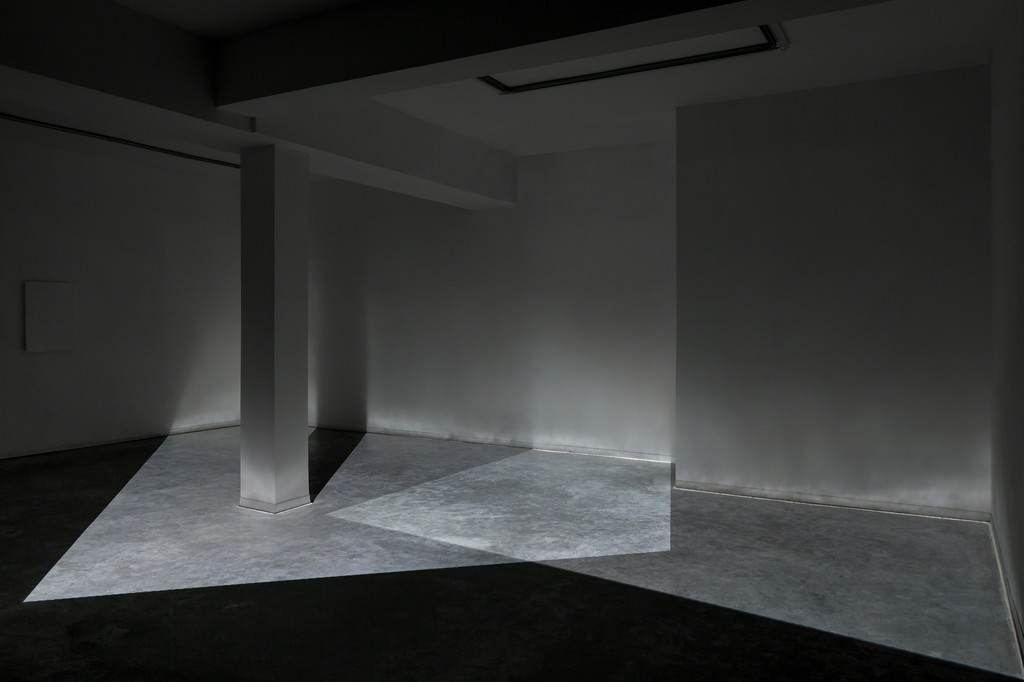 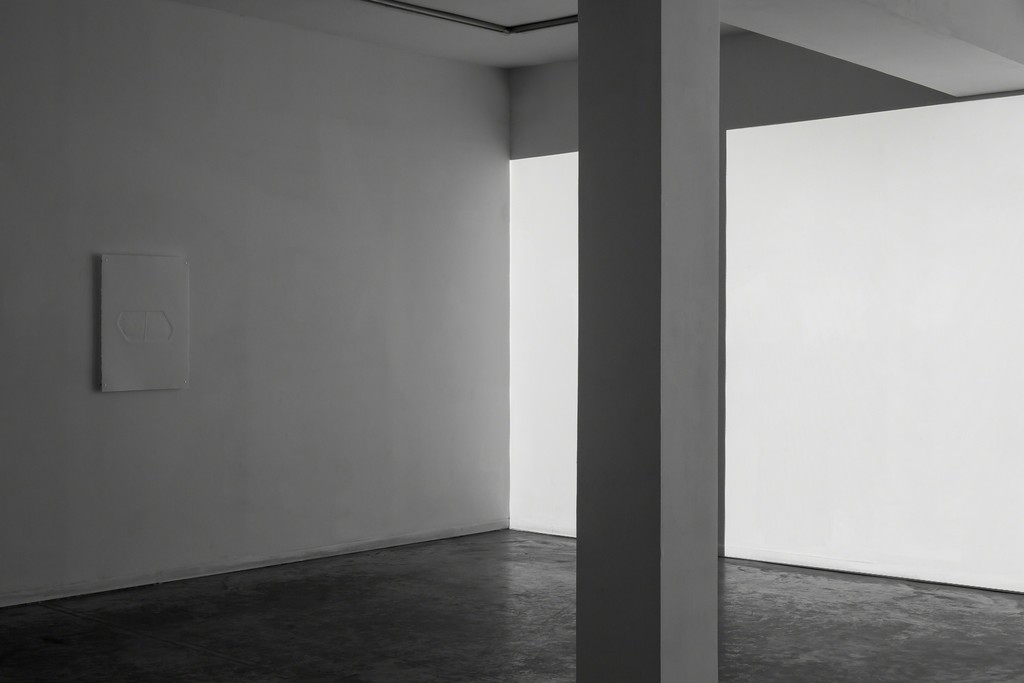 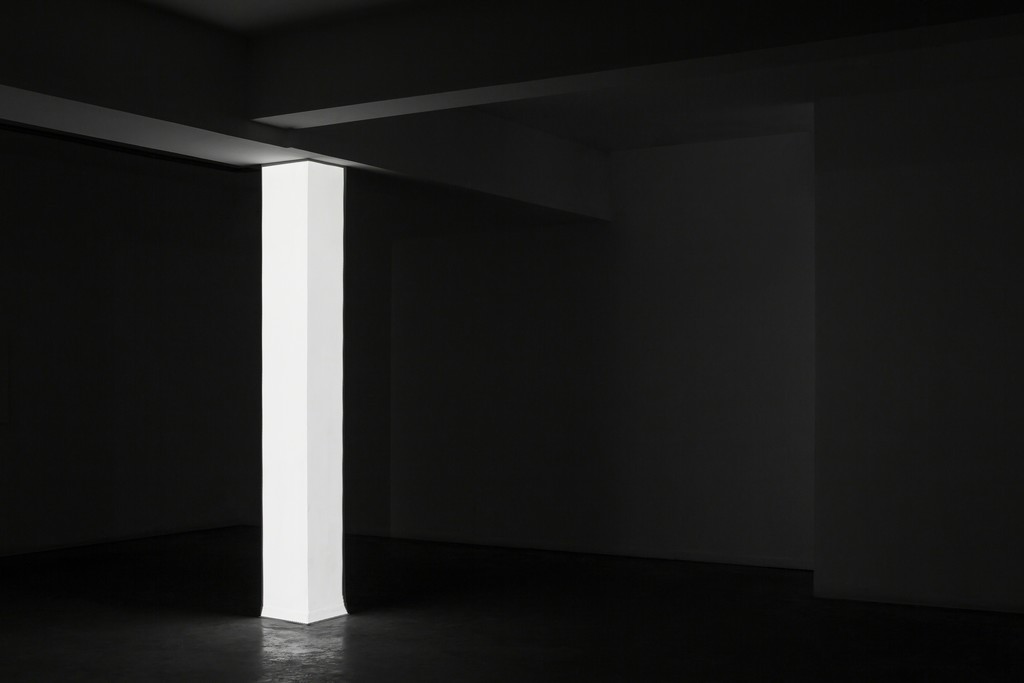 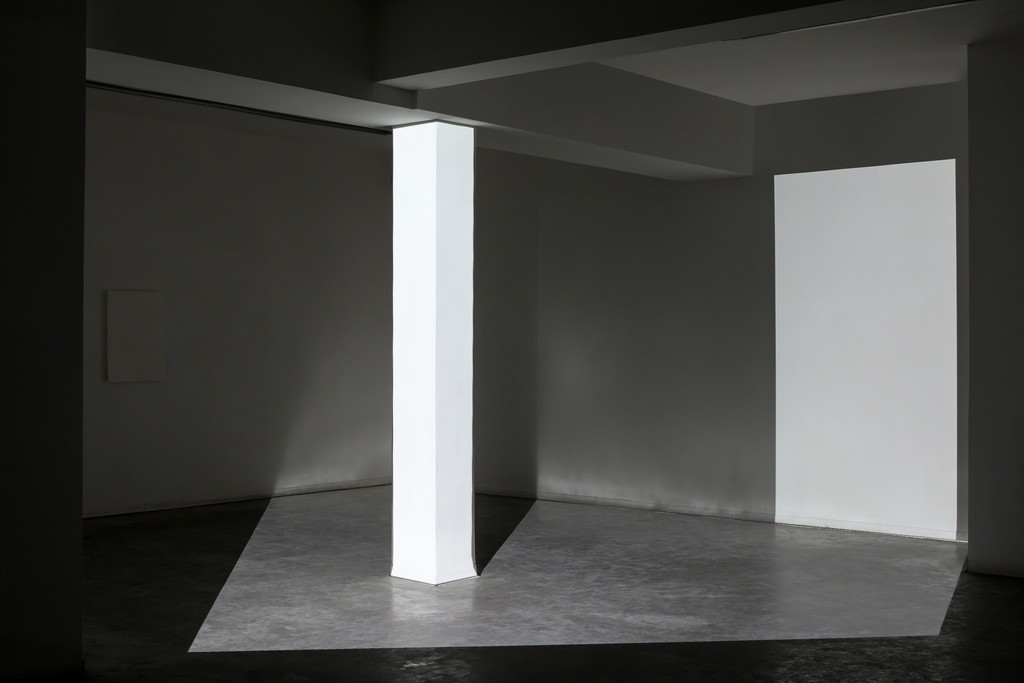 ‘On the Decomposition of a Plane’ is the second solo show for artist Jan Tichy at Hezi Cohen gallery. Two and a half years since his last stay in Israel, Tichy is back in Tel Aviv and back to the gallery space which he examined thoroughly in Installation no. 17, (2013), to provide an elusive foundation for the creation of continuity and complementarity – the pentagon.

In a series of silk screen prints on paper – a new technique for Tichy’s body of work – the pentagon appears as the only polygon that does not surrender to form and decisively refuses an even tiling of a plane in various systems of entanglement and integrations opposed to fragmentation and confrontation.
In each print the pentagon appears in one of fifteen types capable of tiling the plane monohedrally – the finding of these types spreads over the last 100 years, starting with the German mathematician Karl Reinhardt who found the first five types in 1918 and ending with type 15 which emerged this year out of a computer generated search of the sum of possibilities.
Tichy’s contribution to this two-dimensional riddle is a multi-layered monochromatic printing technique which adds a spectrum of depth to the plane and allows its representation in various stages of decomposition and deconstruction, layered in shades of black & grey, which adhere to the eleven stages of exposure and development that were formulated by the American photographer Ansel Adams in his ‘Zone System’.
In the upper space of the gallery Tichy returns to the sets of primitives - base units used to form a plane – six of them, one for each mathematician who discovered them – displaying emboss prints as a part of Installation no. 26, (2015). Printed on white paper – exemplifying primitive/primary visual representations – these are placed outside the screening perimeter. The visibility of the embossed shapes within the prints is considered essential and relies on the constant variation of light and shadow in this space. The interdependence of three systems on a white plane: walls, emboss prints and the projected white light offer a deconstruction and a reinvention of the architectural space.

Questions of visibility, construction and decomposition arise out of the video Cricket (2015), displaying a cricket match occurring at dusk, which is played regularly in the municipal parking lot in front of the gallery, two and a half years after it was documented by Tichy in his last stay in town.

The alternative activity hinders conventions concerning municipality and its citizens and exposes a different order – weekend playground for a group of immigrants. This one hour long video work, which shifts between daylight to after dark, whilst echoing the outdoor sounds in the gallery space, conjures ideas of what is happening beyond the structured walls in relation to the shifting light within the exhibition.