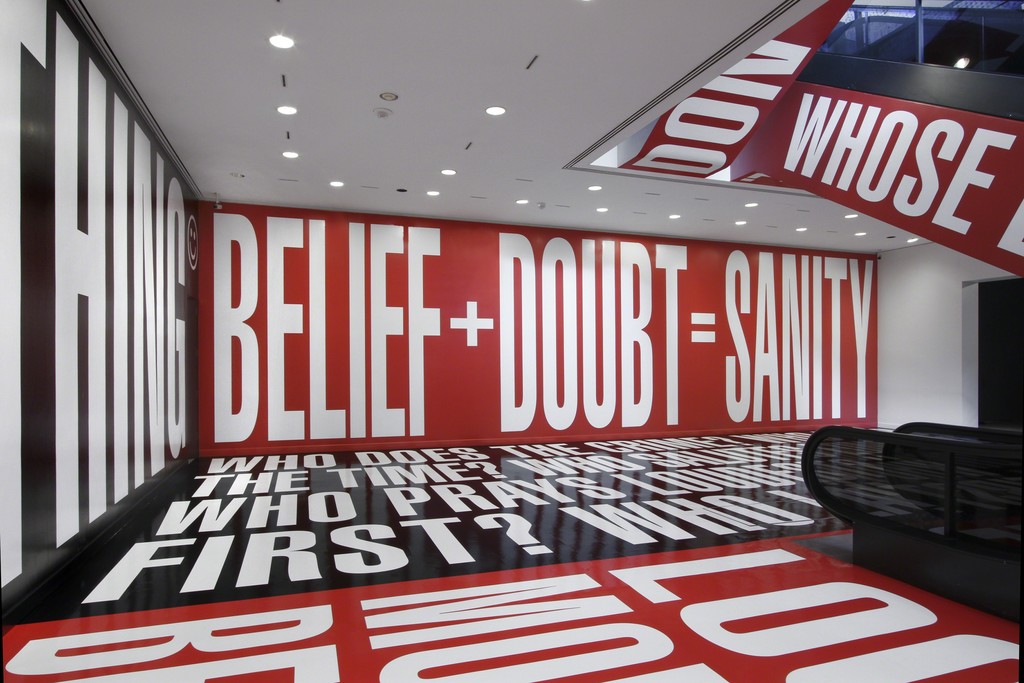 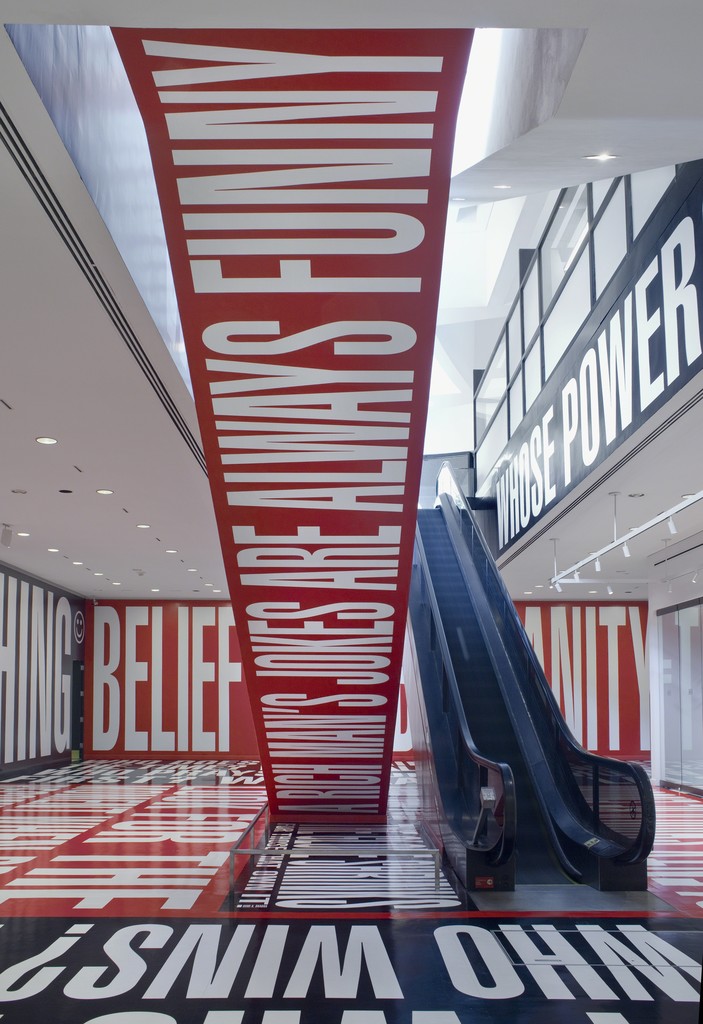 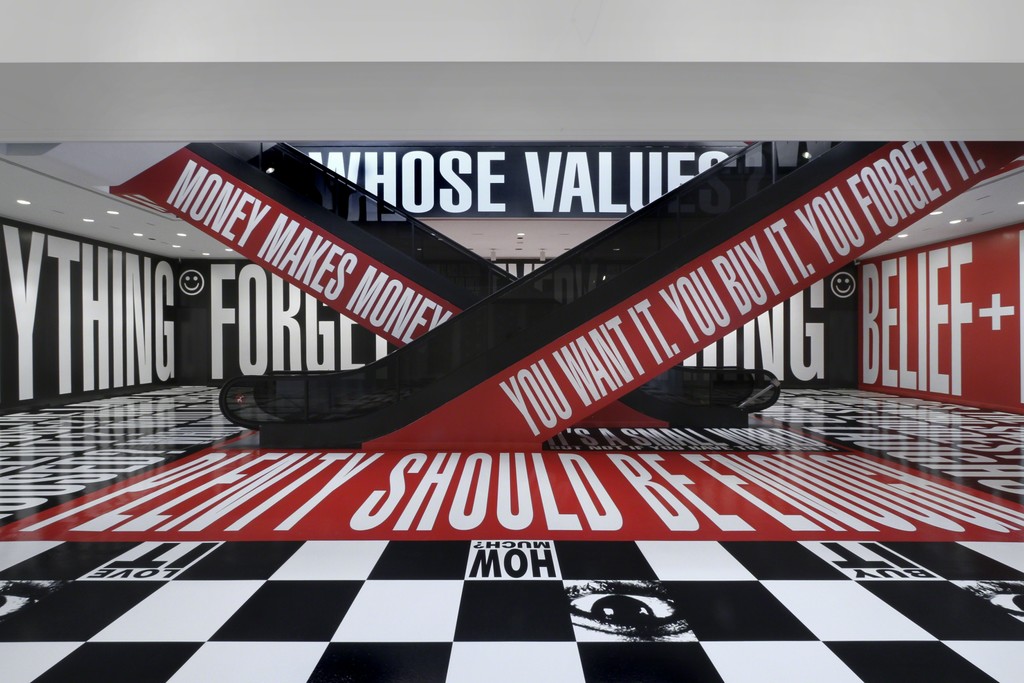 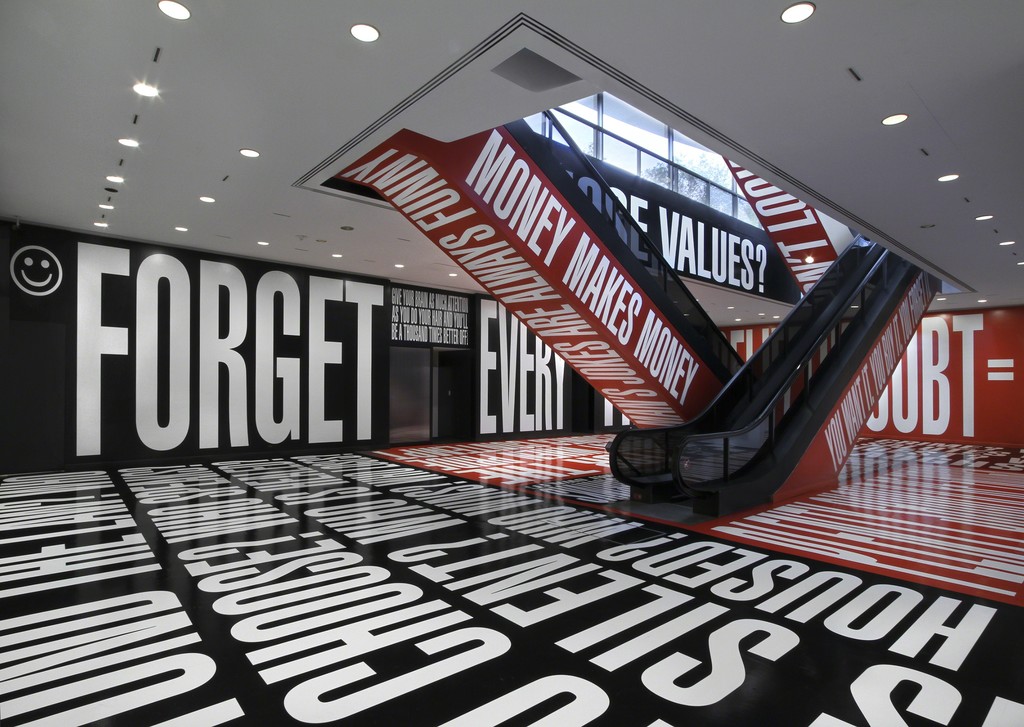 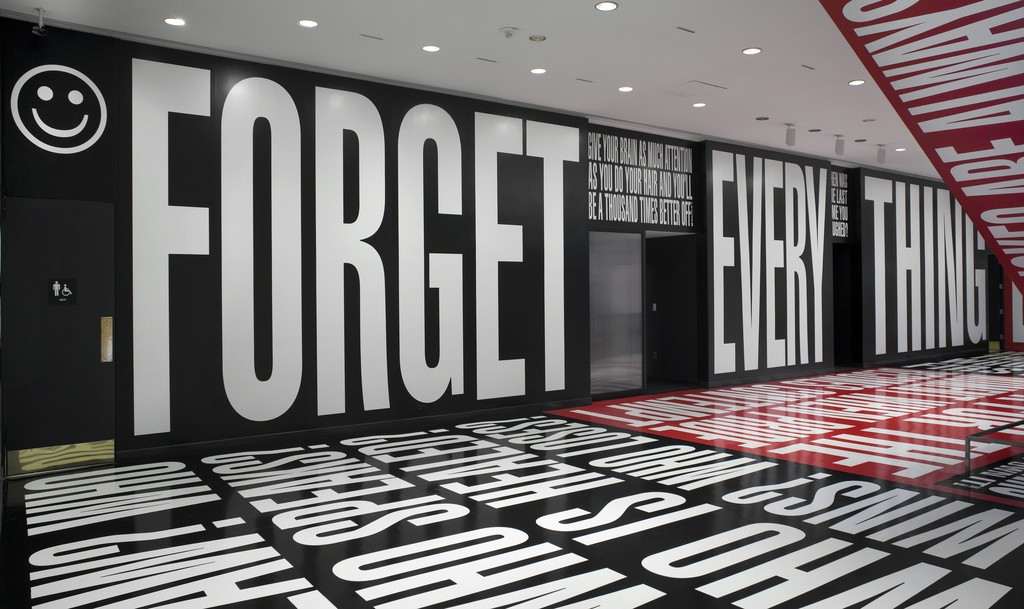 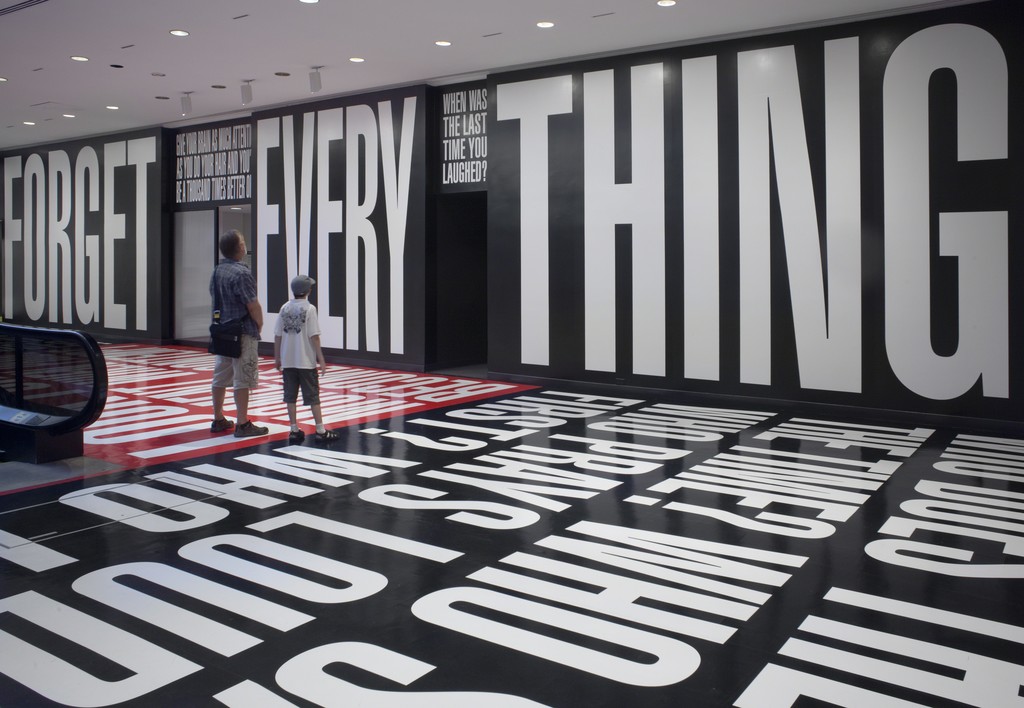 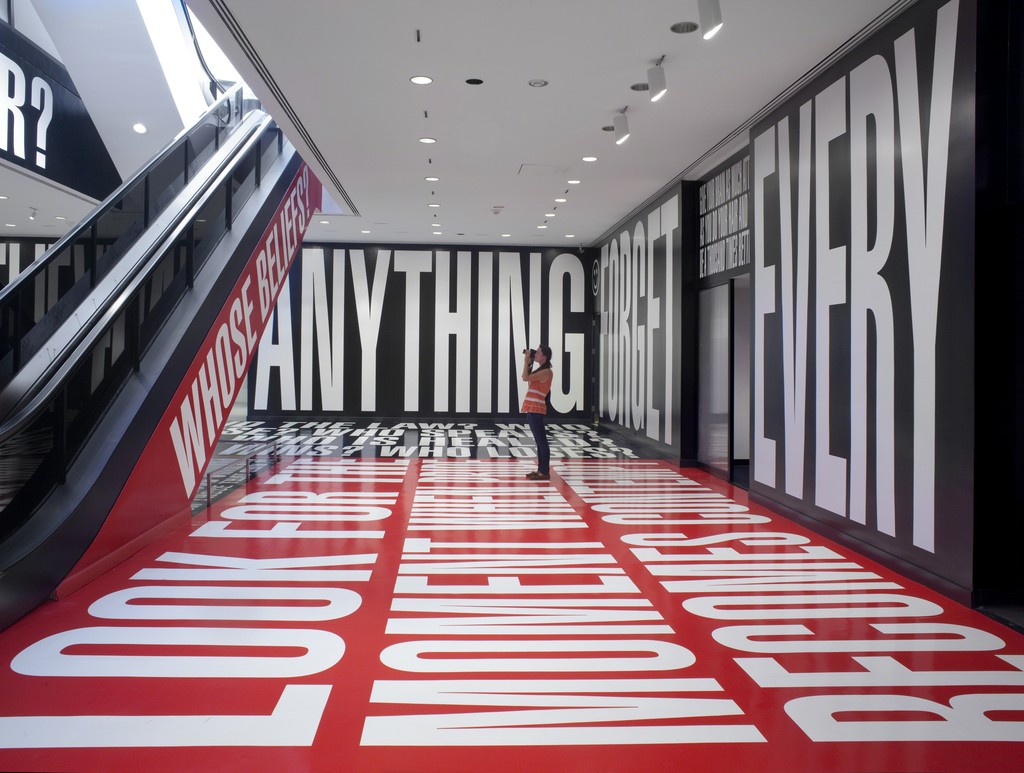 Long-Term Installation to Transform Museum’s Lower Level
The Smithsonian’s Hirshhorn Museum and Sculpture Garden has commissioned internationally renowned artist Barbara Kruger to create a site-specific installation for one of the museum’s most-visited public spaces. Opening Aug. 20, “Belief+Doubt” (2012) will fill the lower-level lobby and extend into the newly relocated museum bookstore. Approximately 6,700 square feet of surface—including walls, floor and escalator sides—will be covered in text-printed vinyl, surrounding viewers with lettering up to 12 feet high in a high-contrast color scheme of red, white and black.

“Belief+Doubt” speaks to the social relations and networks of power that define daily life. At a time when the value of certitude is taken for granted, Kruger says she is “interested in introducing doubt.” Large swaths of the floor are covered in open-ended questions (“WHO IS BEYOND THE LAW? WHO IS FREE TO CHOOSE? WHO SPEAKS? WHO IS SILENT?”), while the area facing the bookstore explores desire and consumption (“YOU WANT IT. YOU BUY IT. YOU FORGET IT.”).

“It’s a tremendous opportunity,” said Kruger, noting the particular resonance these themes have in Washington, a city preoccupied with power.

“Belief+Doubt” will remain on view through 2014, the year the Hirshhorn celebrates its 40th anniversary. Like the recent presentation of Doug Aitken’s “Song 1” on the façade of the museum, Kruger’s installation is part of an initiative to activate new sites in and around the Hirshhorn. “Throughout the museum, we are emphasizing the artist’s voice,” said Richard Koshalek, director of the museum. “In addition, we are committed to curating all of the Hirshhorn’s public areas, not only those already thought of as exhibition spaces. Barbara Kruger’s work interrogates the way power and money flow in contemporary society. Having her intervene in a part of the building that is at once a social site and a place of commerce amplifies both her concerns and those of the Hirshhorn.”

Assistant Curator Melissa Ho, coordinator of the project, said, “Kruger’s command of architectural space and her ability to engage an audience amidst busy, lived experience make her the ideal artist to work with this site. ‘Belief+Doubt’ takes advantage of the constant movement through the lobby. As visitors descend the escalators, they are surrounded by language that beckons from all sides but only fully reveals itself as they pace and circulate through the entire space.”

In the 1980s, Kruger’s work helped bring photographic illustration and the techniques of mass media into the mainstream of contemporary art. Her signature photomontages, in which images from old books and magazines are emblazoned with banners of text designed to complicate the original meaning of the pictures, are some of the decade’s defining artworks. Kruger built on her early experience as a magazine photo editor and designer and book jacket designer to reconceive conceptual art as a vibrant public discourse by endowing it with a provocative visual identity and graphic punch. A profound influence not only on the development of visual art but also on movements in graphic design and street art, her work has moved fluidly between white-cube galleries and urban spaces, being equally at home printed on matchbooks, T-shirts, billboards, shopping bags, magazine covers and the sides of buses.

Since the 1990s, Kruger has focused increasingly on creating environments that encompass the viewer in language, either through sound and video projection or, as at the Hirshhorn, the enclosure of a space with text. In recent years, her site-specific vinyl installations have been mounted at the Schirn Kunsthalle in Frankfurt, the Stedelijk Museum in Amsterdam and the Los Angeles County Museum of Art. Her room-sized multichannel video work “The Globe Shrinks” (2010) has been shown in Berlin, New York, London and Los Angeles. In 2005, Kruger was awarded the Golden Lion for Lifetime Achievement at the 51st Venice Biennale.

The materials for this project have been generously donated by 3M. Additional funding was provided by L&M Arts and the Barbara Lee Family Foundation.

Documentation of the installation will become available in early July, and photographs of “Belief+Doubt” in its final state will be released in August.