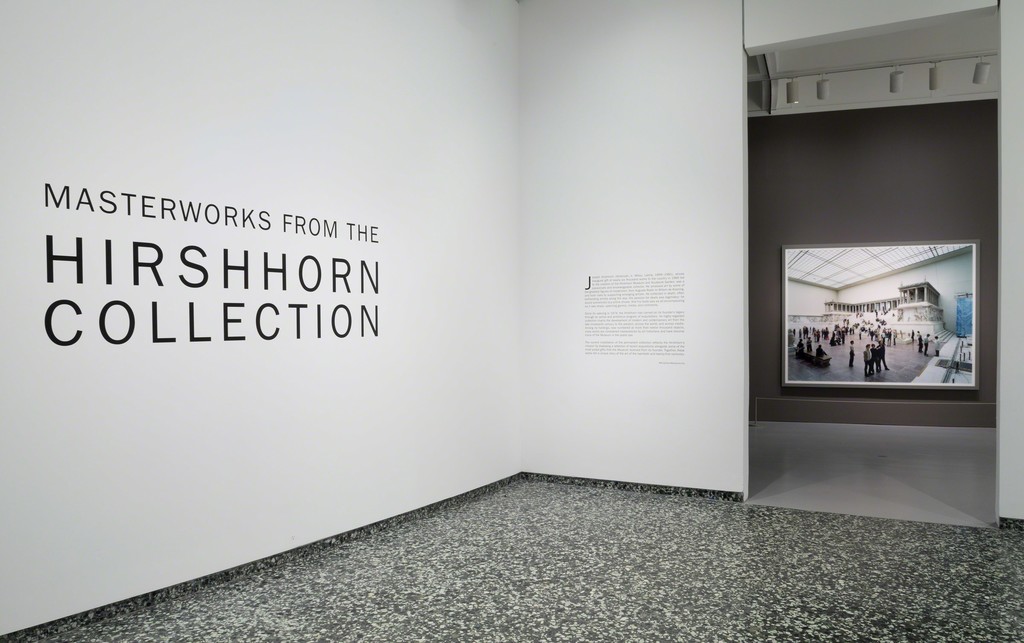 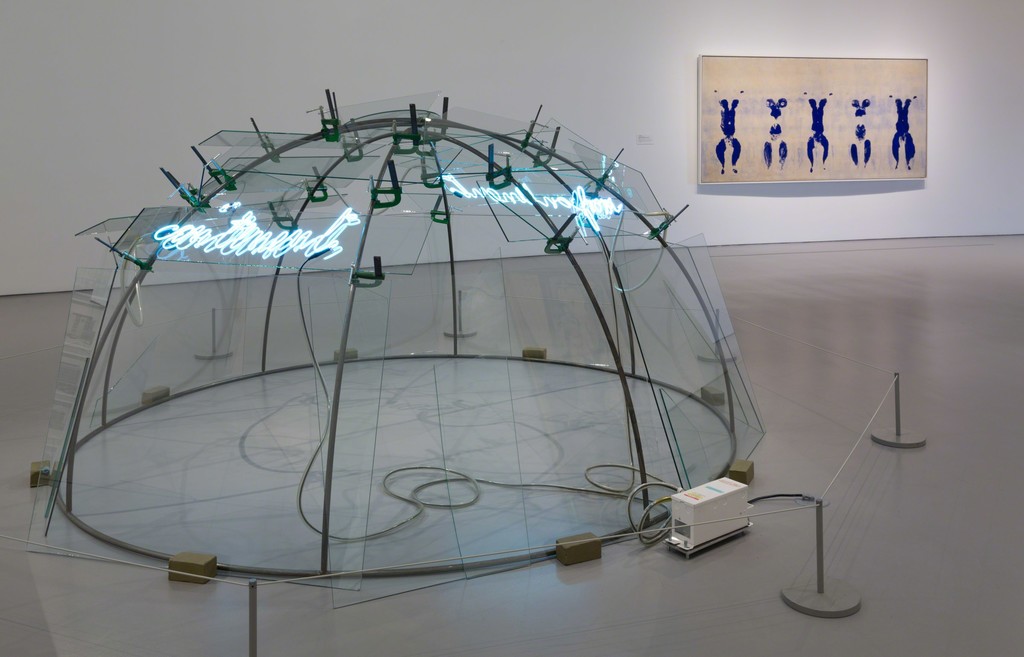 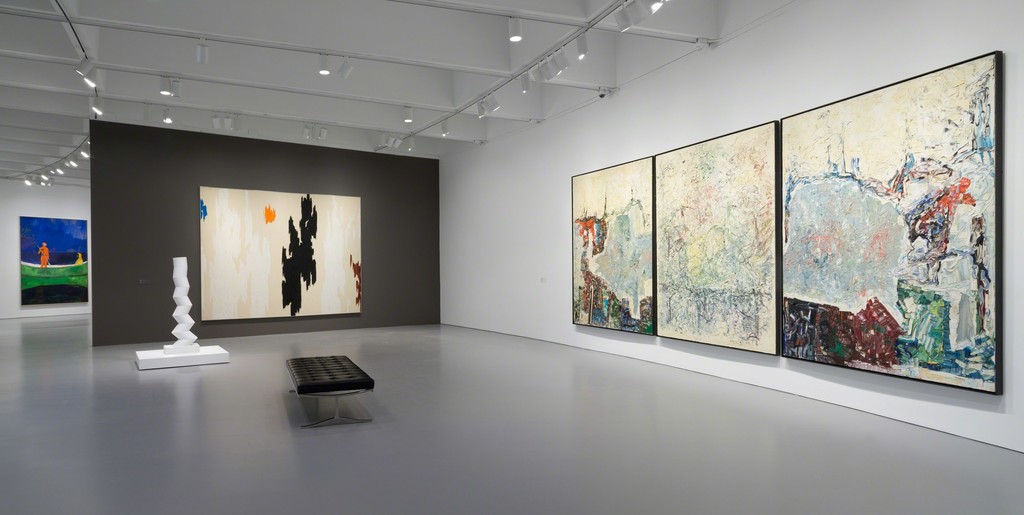 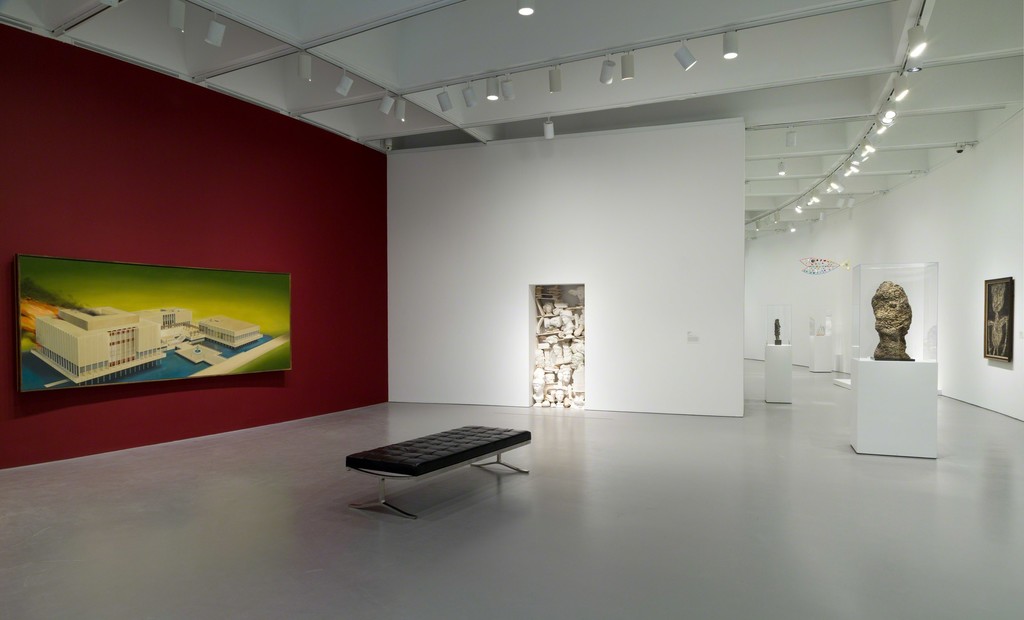 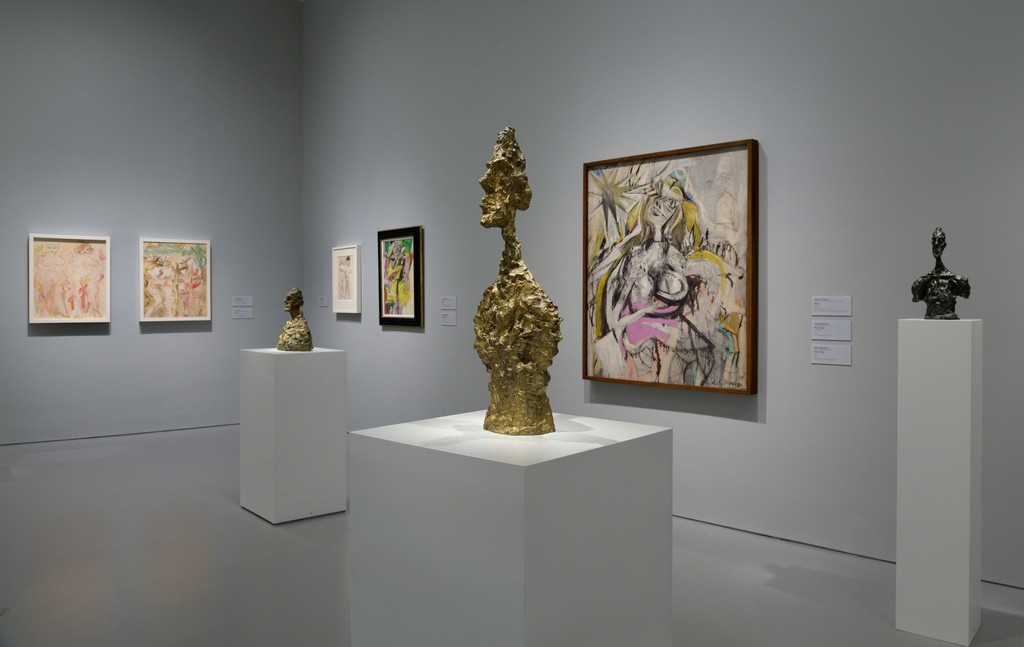 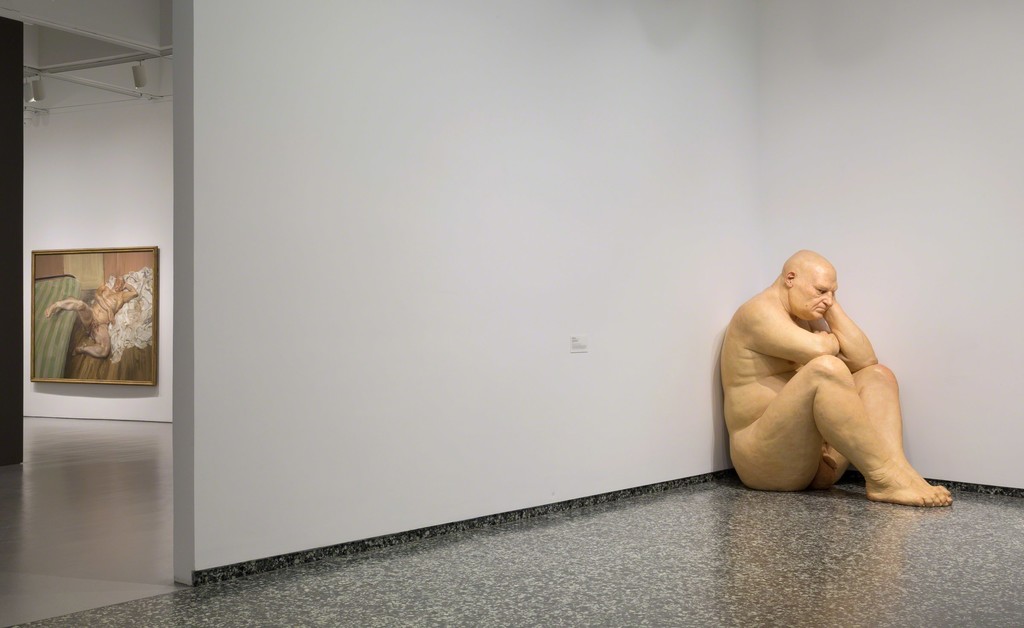 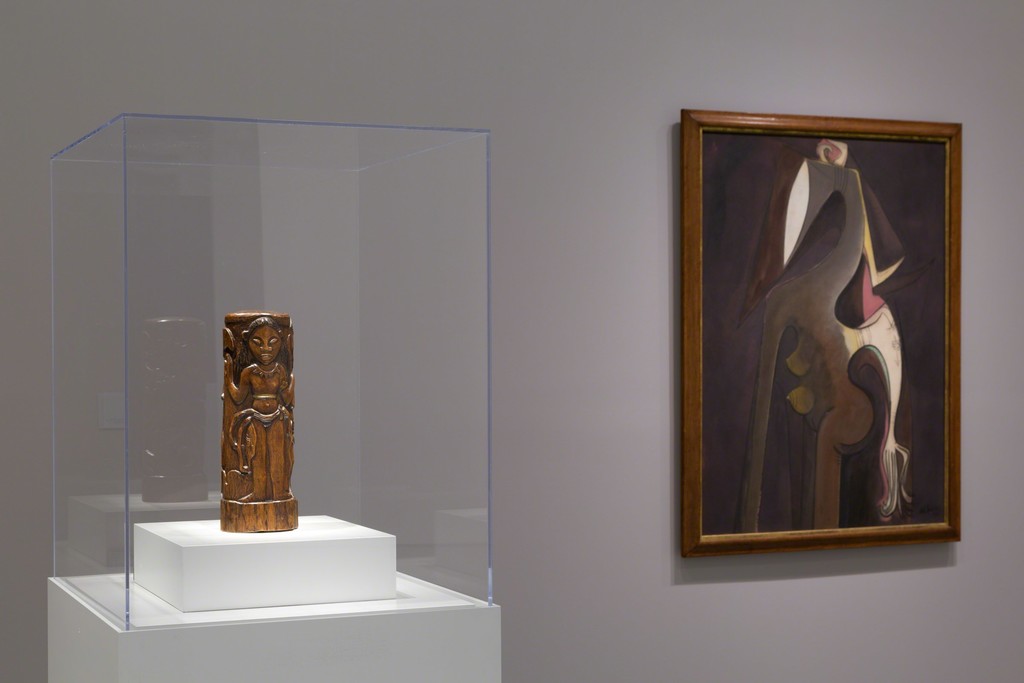 Installation view of Masterworks from the Hirshhorn Collection at the Hirshhorn Museum and Sculpture Garden, 2016. Left to right: Paul Gauguin, Hina with Two Attendants, 1892; Wifredo Lam, Siren of the Niger, 1950. Photo: Cathy Carver 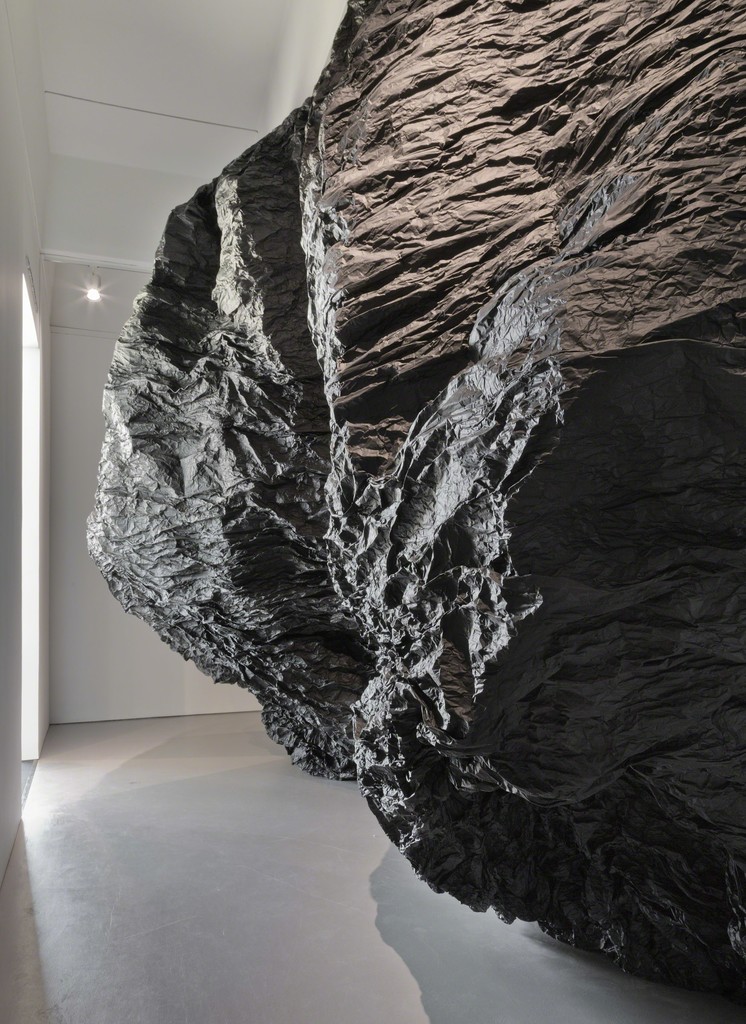 Installation view of Masterworks from the Hirshhorn Collection at the Hirshhorn Museum and Sculpture Garden, 2016. Eduardo Basualdo, The End of Ending, 2012. Photo: Cathy Carver 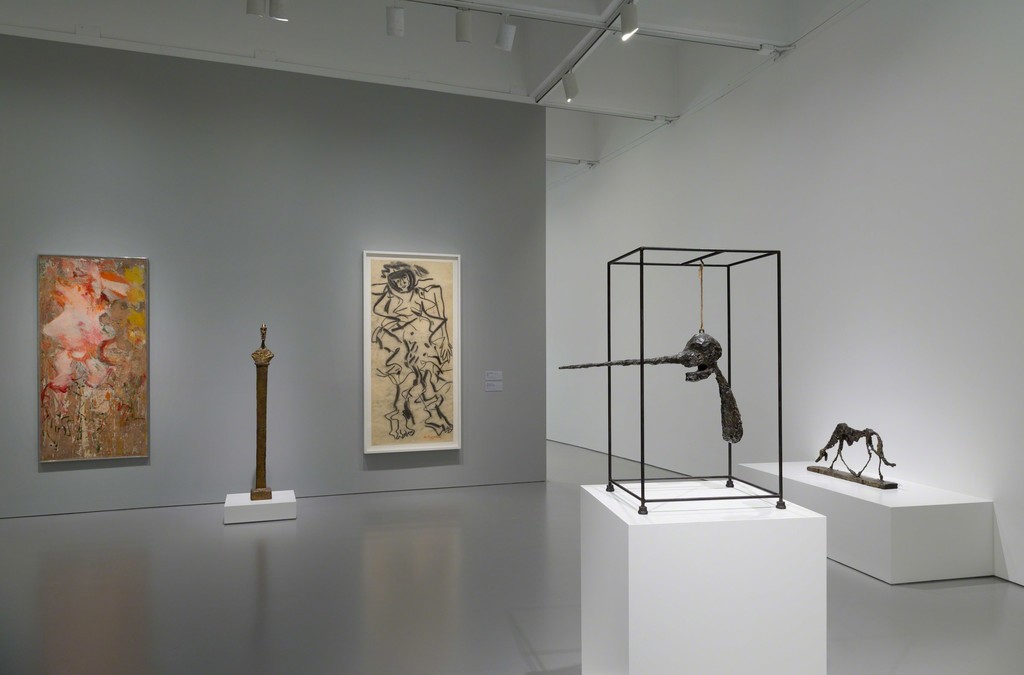 New exhibition highlights recent acquisitions: Monumental Paintings by Miró, Mitchell, and Riopelle also on view for the first time in more than a decade

“Masterworks from the Hirshhorn Collection,” a new rehanging of the third-level permanent collection galleries of the Smithsonian’s Hirshhorn Museum and Sculpture Garden, opens June 9. Featuring more than 75 works in virtually all media, the exhibition includes several major artworks that have not been on view in more than a decade, as well as in-depth installations devoted to some of the most important artists in the collection.

On view at the Hirshhorn for the first time since returning from the White House in 2008 is “Painted on 21st Street” (1950-51), an early abstract expressionist canvas by Helen Frankenthaler. Joan Miró’s “Woman Before an Eclipse With Her Hair Disheveled by the Wind” (1967) has rarely been on view in 25 years.

More than a dozen paintings and works on paper by Willem de Kooning will be exhibited alongside sculptures by Alberto Giacometti, foregrounding holdings of both artists’ works that are among the best in the world. Jean Dubuffet will be represented by both sculptures and paintings and Francis Bacon by two 1957 paintings inspired by Van Gogh. Other cornerstones of the collection on view are Constantin Brancusi‘s “Sleeping Muse I” (1909-10), Edward Hopper‘s “Eleven A.M.” (1926), Ed Ruscha‘s “The Los Angeles County Museum on Fire” (1965-68), Louise Bourgeois‘ “Legs” (1986/cast 2008) and Ron Mueck‘s “Untitled (Big Man)” (2000).

“Our founding benefactor, Joseph H. Hirshhorn, ensured that there will always be a place for modern and contemporary art on the National Mall,” said Melissa Chiu, the Hirshhorn’s director. “It is a vital part of our cultural heritage. With this installation, we wanted to honor the generosity of Joe and his wife Olga, and to point the way forward by hanging the best works from their original gift with some of the latest additions to the collection.”

“The reinstallation also allows us to reexamine works that have not been seen in more than a decade,” said Stéphane Aquin, the museum’s chief curator. “We have major monumental triptychs by both Joan Mitchell, who is well known but still underappreciated, and Jean-Paul Riopelle, who is rightly lauded as among the 20th century’s greatest abstract painters in his native Canada and in France, where he worked for many years, but for whom recognition in the United States is still lagging. It is a joy to be introducing these works to a new generation of viewers.”

Other rarely exhibited works include Robert Delaunay’s “Study for Portrait of Philippe Soupault” (1922) and a pair of maquettes for kinetic sculptures by George Rickey from the 1960s.

New cultural histories will be represented by some of the most recent additions to the Hirshhorn’s collection. Brazil-based Mexican artist Héctor Zamora‘s “O Abuso da História [The Abuse of History]” (2014) is a video of a riotously destructive group performance at São Paulo’s Hospital Matarazzo, a historic building slated for redevelopment. Occupying the Lerner Room overlooking the National Mall, Cuban artist Reynier Leyva Novo‘s “Five Nights” (2014) maps five revolutionary 20th-century manifestos that gave rise to totalitarian regimes-penned by Lenin, Hitler, Castro, Mao and Gadhafi-to conceptual monochromes based on the amount of ink spilled in each text. Also appearing at the Hirshhorn for the first time is “R.S.V.P. X” (1976/2014) by Senga Nengudi, who in the 1970s was among a group of artists in Los Angeles who explored conceptual and performance art in their pursuit of a new African American aesthetic.

The exhibition will be augmented by a special loan of Peter Doig‘s painting “Spearfishing” (2013), which hangs alongside richly colored canvases by Bacon, Richard Diebenkorn and Wifredo Lam. Eduardo Basualdo‘s “The End of Ending” (2012), a massive sculptural installation that occupies all but a sliver of walkable space in a gallery adjoining the Lerner Room, is among the newest additions to the Hirshhhorn