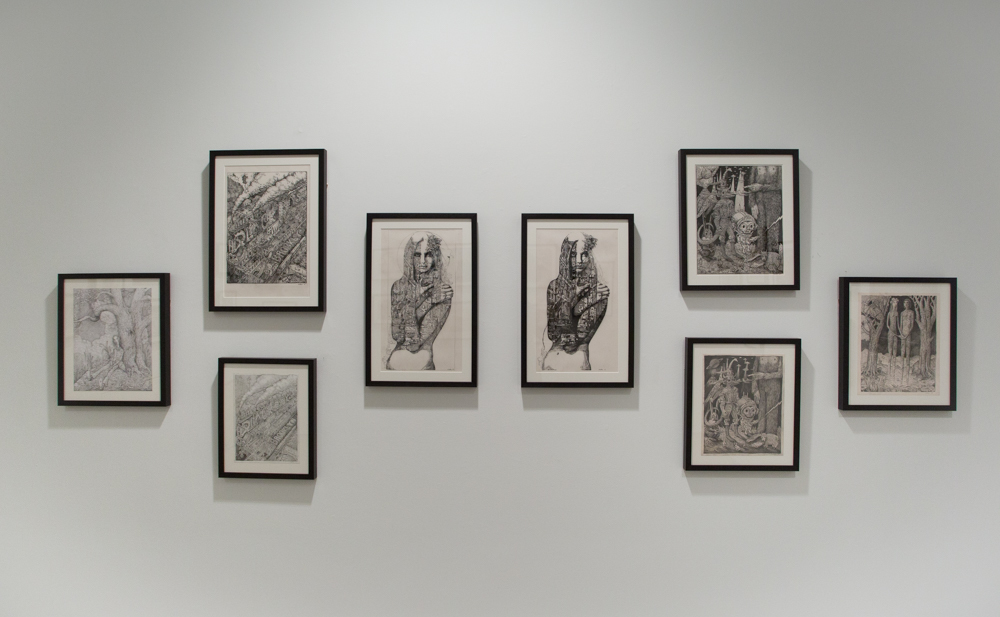 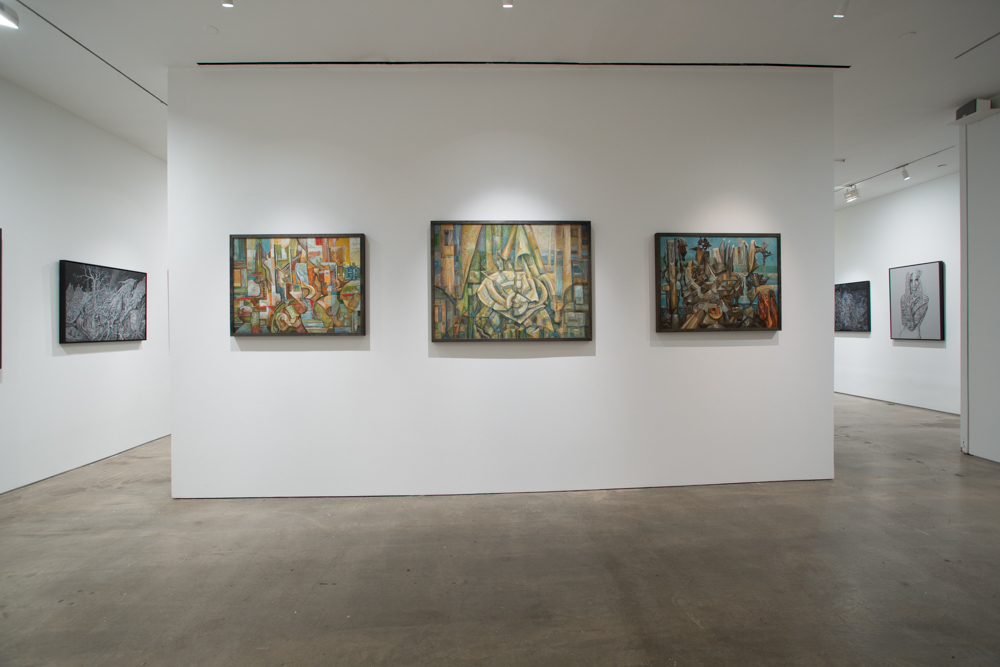 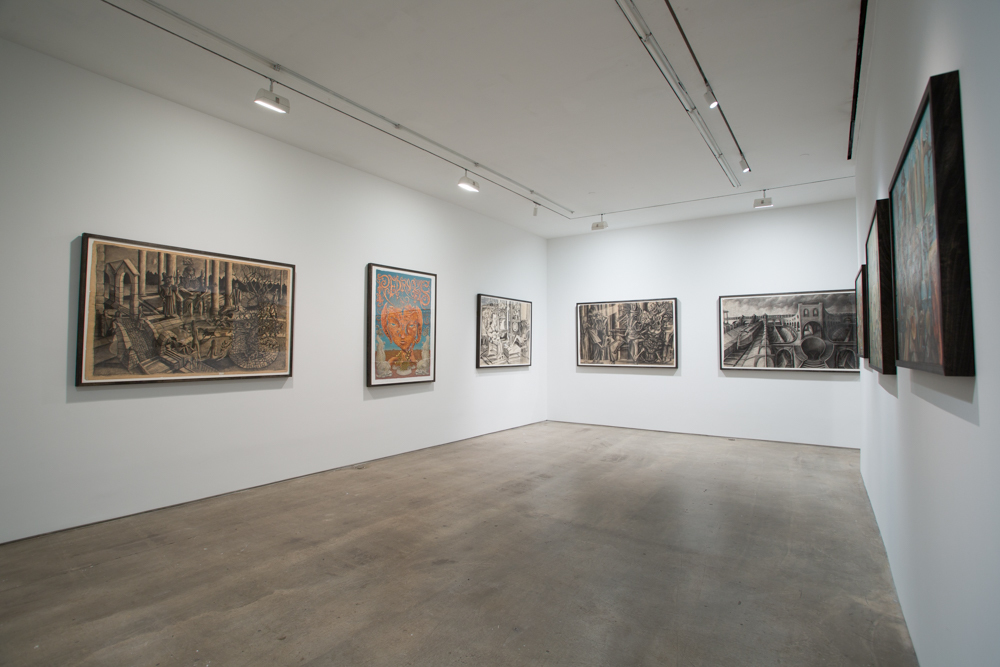 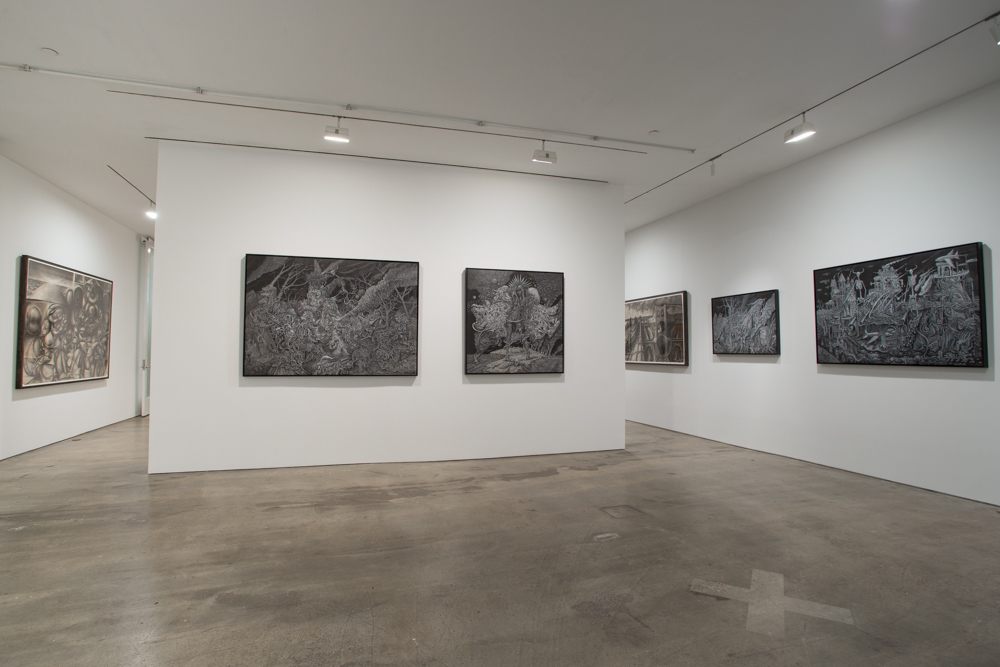 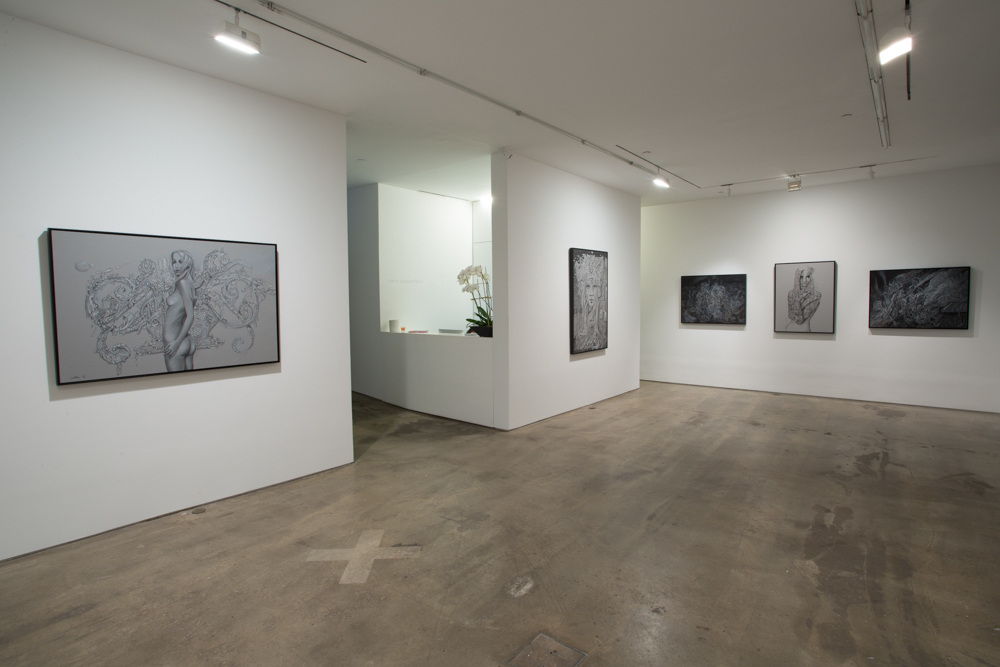 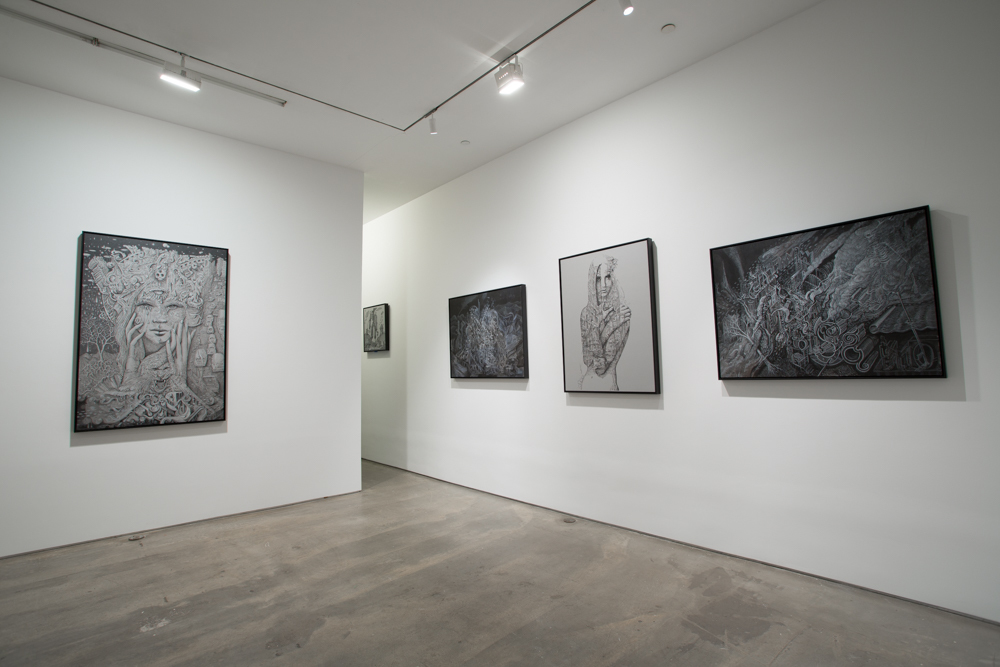 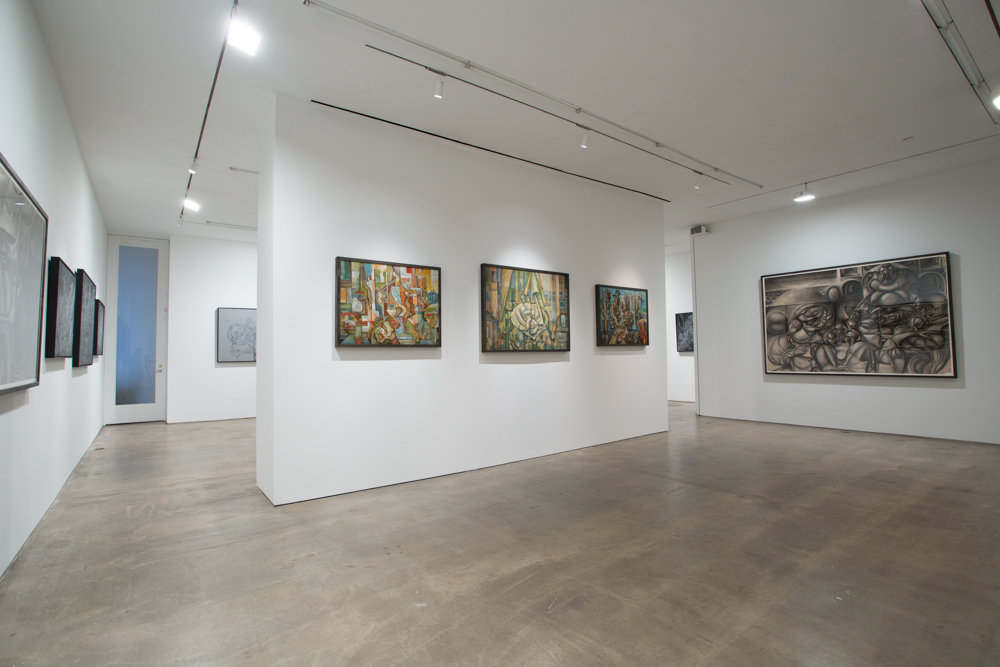 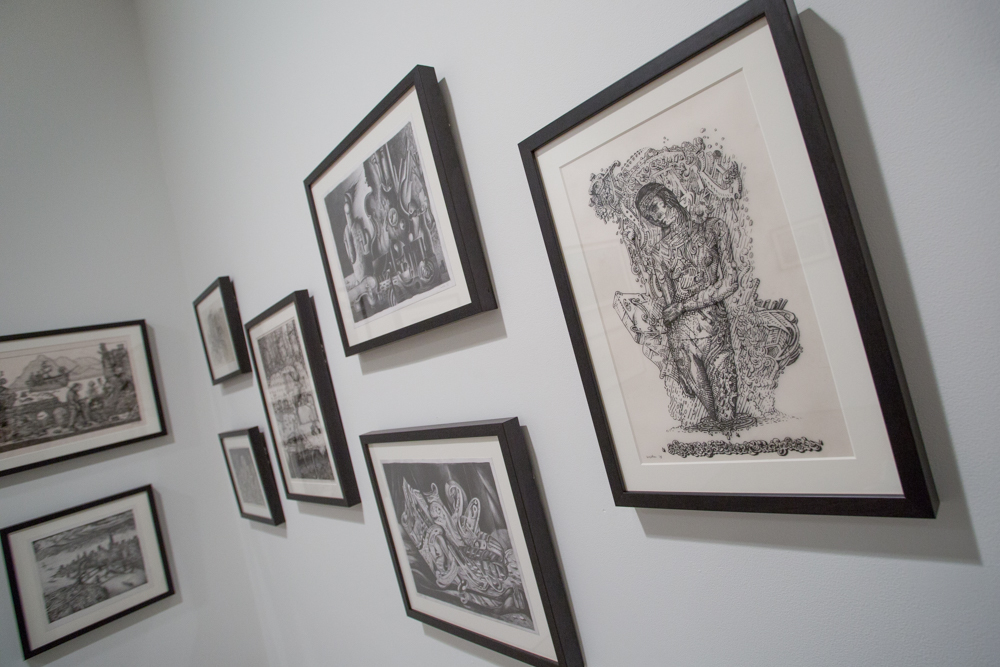 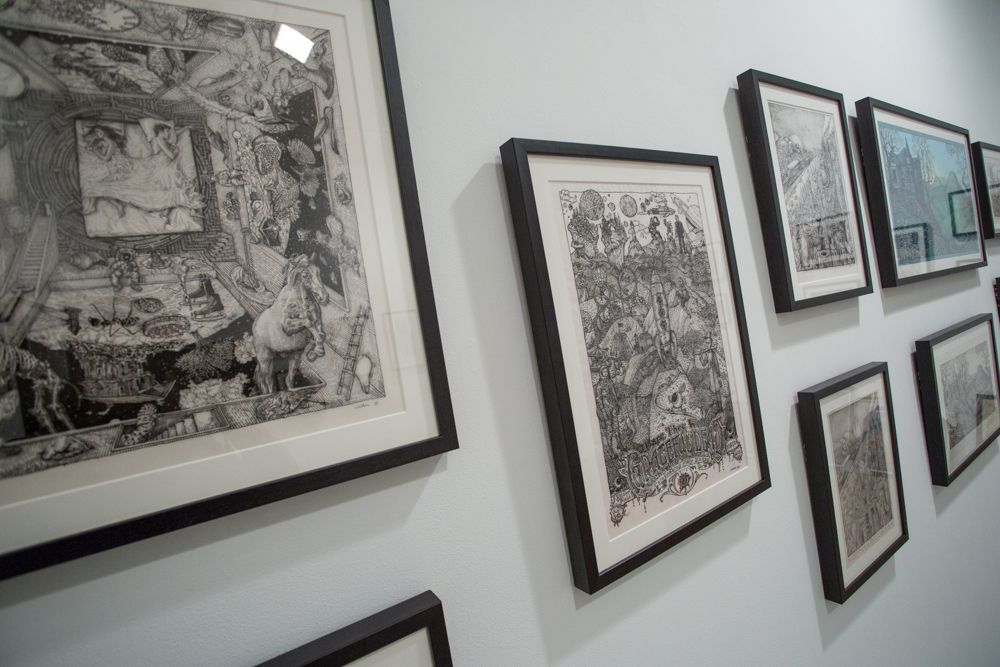 The Hoerle-Guggenheim Gallery presents David Welker: Subconscious Narratives,
the artist’s first solo show. His career has followed a path of experimentation and genre jumping taking him from the top of the landscape mural scene to the top of the concert poster scene in just a few years. Welker is now setting his sights on the gallery world as he continues to express all of his varied influences in a unified visual aesthetic which combines his deep appreciation of early 20th century Surrealism with his love of pervasive pop culture.
With Subconscious Narratives Welker depicts a thought before it becomes a word, concept, story or tangible form. These studies are not isolated to one brief instant but instead capture the turmoil of forms transitioning in the mind from moment to moment. By getting in tune with his minds eye Welker has noticed that the periphery of each thought has edges fading into others. His imagination hovers in a space devoid of temporal constraints or physical permanence. This is the conceptual DNA of Subconscious Narratives - an exploration of the cloudy impressions leading up to and receding from a fabricated instance. While the center of the pieces may be a conceptual focus, the edges form building blocks for dreams not yet depicted. The subconscious narrative barely holds onto the present while the past and future drive into being. Its beginning is another’s middle and end.
David Welker tells us that “The reason I chose to depict my subconscious with paint is because this form is a tangible reality others can interpret. It is a rosetta stone for our minds. While there may seem to be a story or a narrative taking place in a piece, the audience is invited to make synaptic leaps in his or her own subconscious to interpret the story for his or herself.”
Having spent the last several years immersed in conceptual realism, David Welker has let go of the planning involved in that technique. Now the paintbrush and mind play together in a harmony of improvisation. David’s spinal chord drips directly onto the canvas, allowing his subconscious to reveal itself through the physical application of paint onto canvas. The narrative dictates what it wants to become rather than mapping out every aspect of its development. The blueprint only reveals itself in hindsight. For him, this is the closest representation of how his subconscious operates.
David Welker has a large, dedicated and loyal family of fans that purchase his limited edition prints in such high demand that they have sold out in as little as 16 seconds.
Every print he has released has sold out. This show will feature a body of original work that his fans have sought for his entire career, but was only available in poster or print version. It will include never before seen original paintings, never released original drawings, both of new work and of old work, brand new limited edition prints and mixed media prints. There is a dedicated website www.welkershow.com where fans can RSVP for our opening and closing events, and purchase selected prints online.
ABOUT DAVID WELKER
Welker is a NYC based contemporary visual and musical artist known for his elaborate rock posters, murals and paintings, ranging from fantasy landscapes to urban realism. His work over the last two decades has built a devout following from private collectors and celebrities to indie and pop-rock musical acts, including The Grateful Dead, Phish, Pearl Jam, The Black Keys and many others. Welker’s visual style mixes depression era Surrealism with a contemporary take on underground comics. His work, enigmatic and ever changing is always a challenge to classify, but perhaps can best be described as “modern, urban, psychedelic, folk art”.