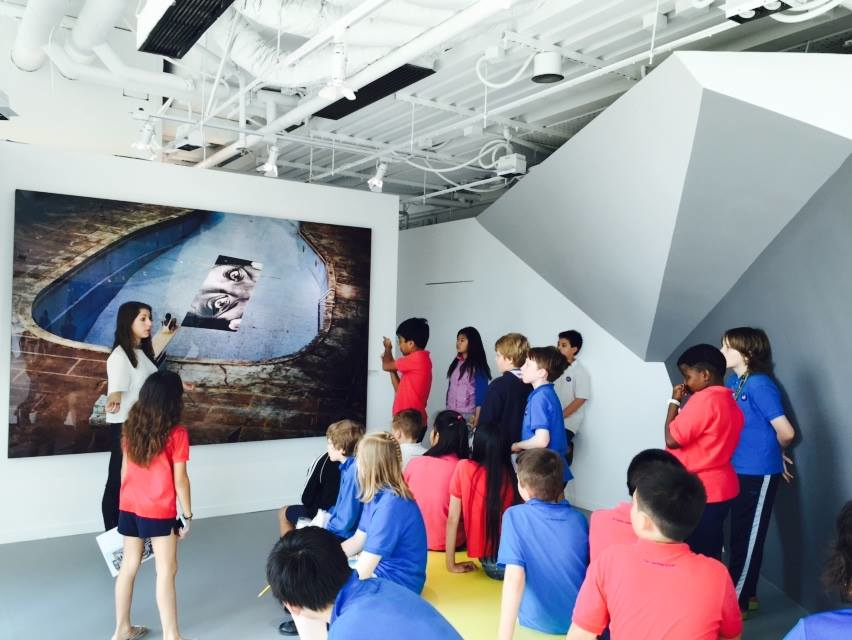 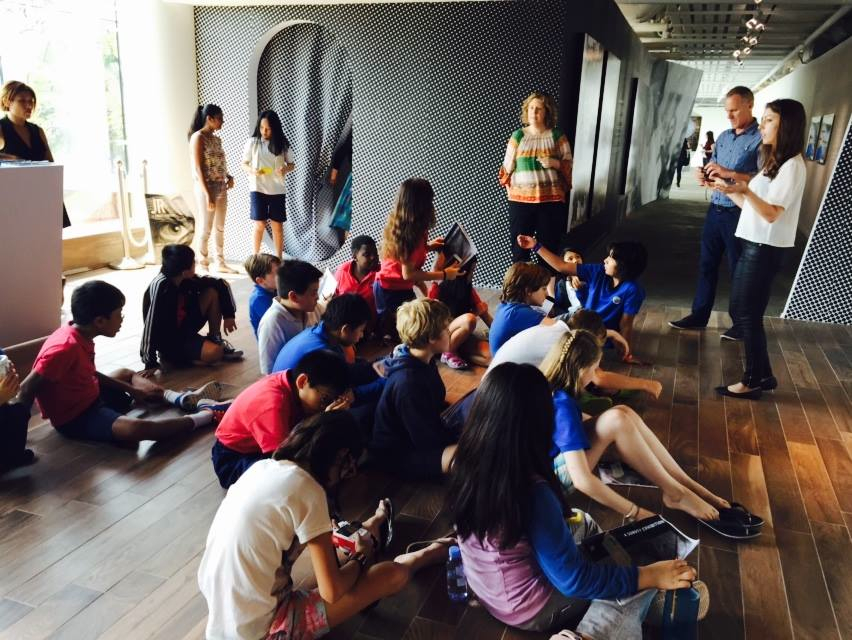 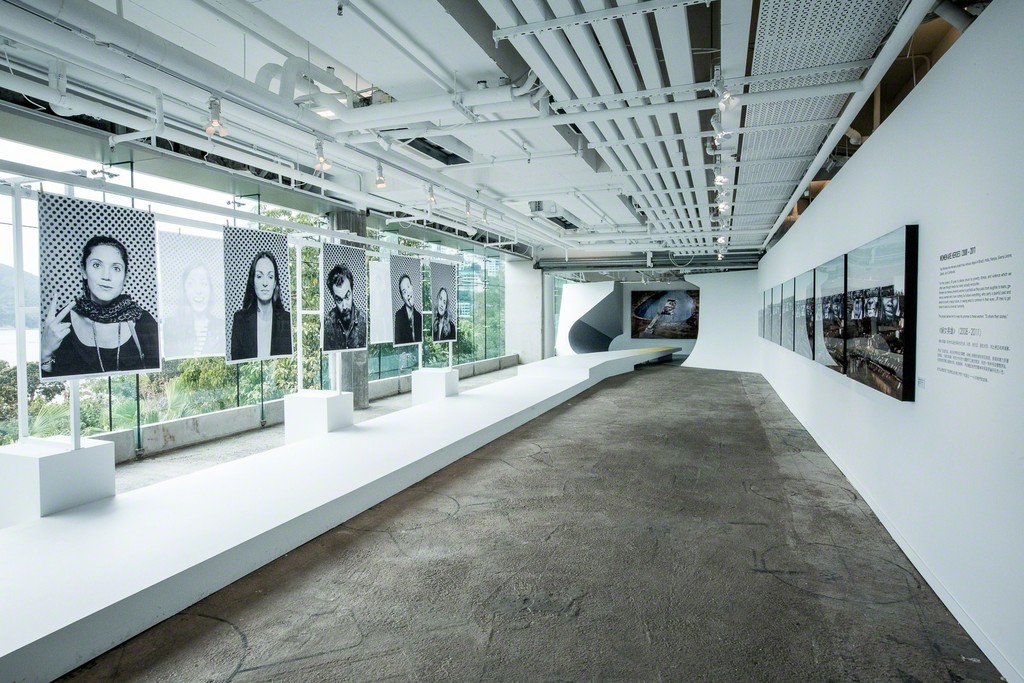 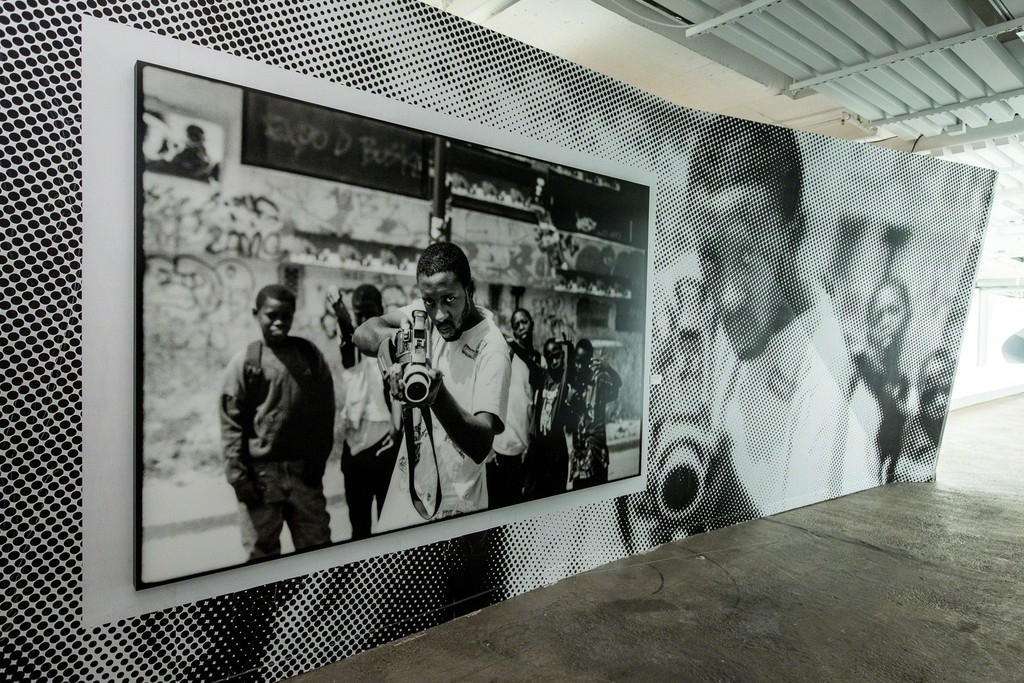 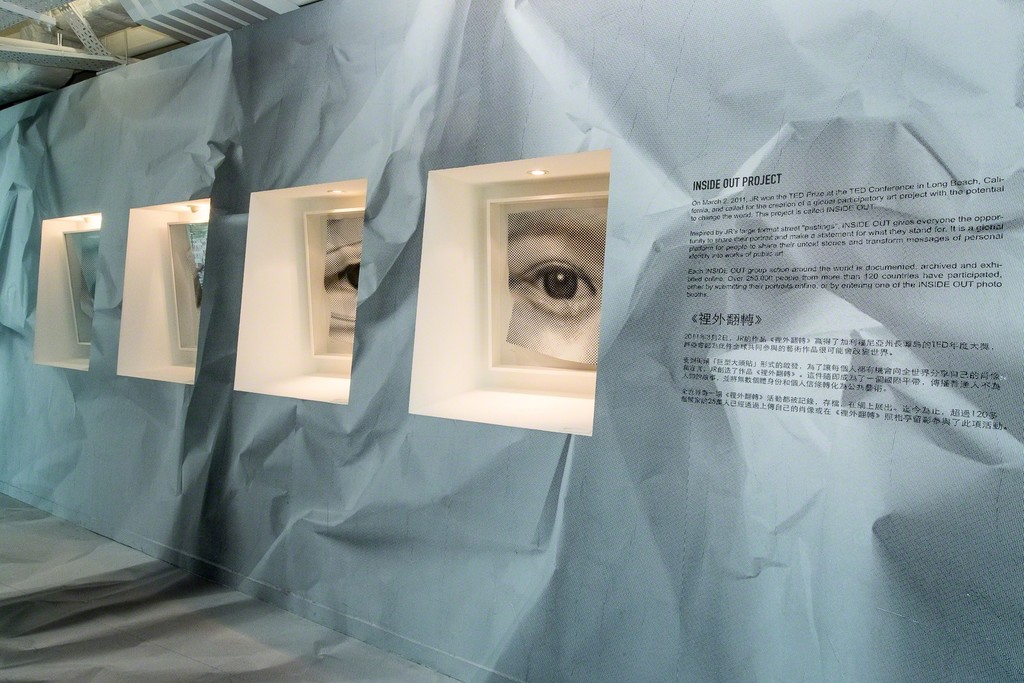 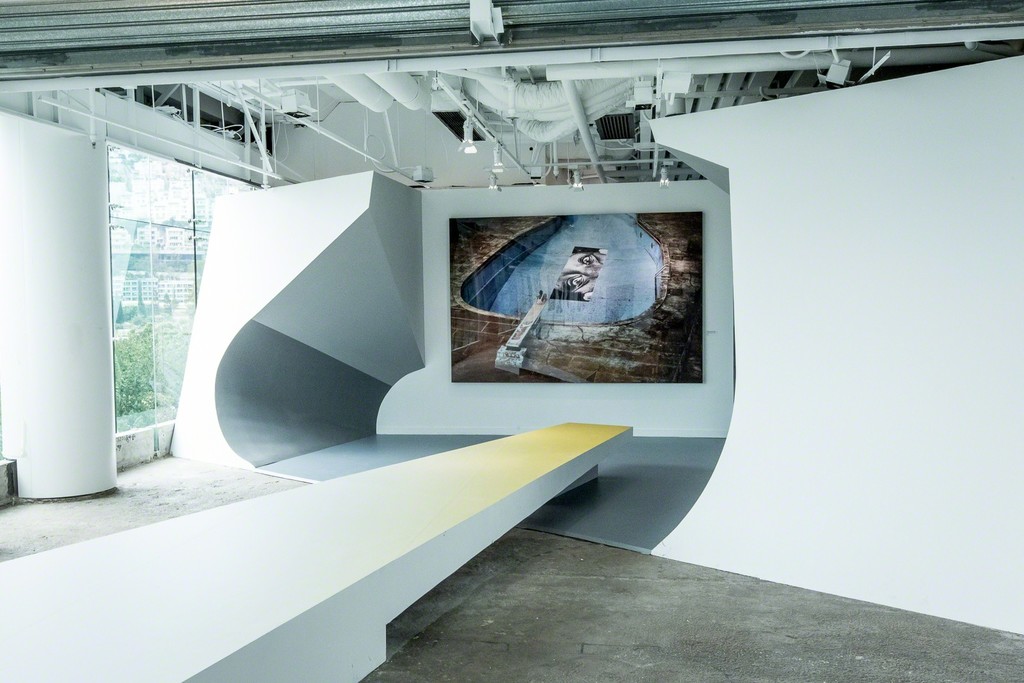 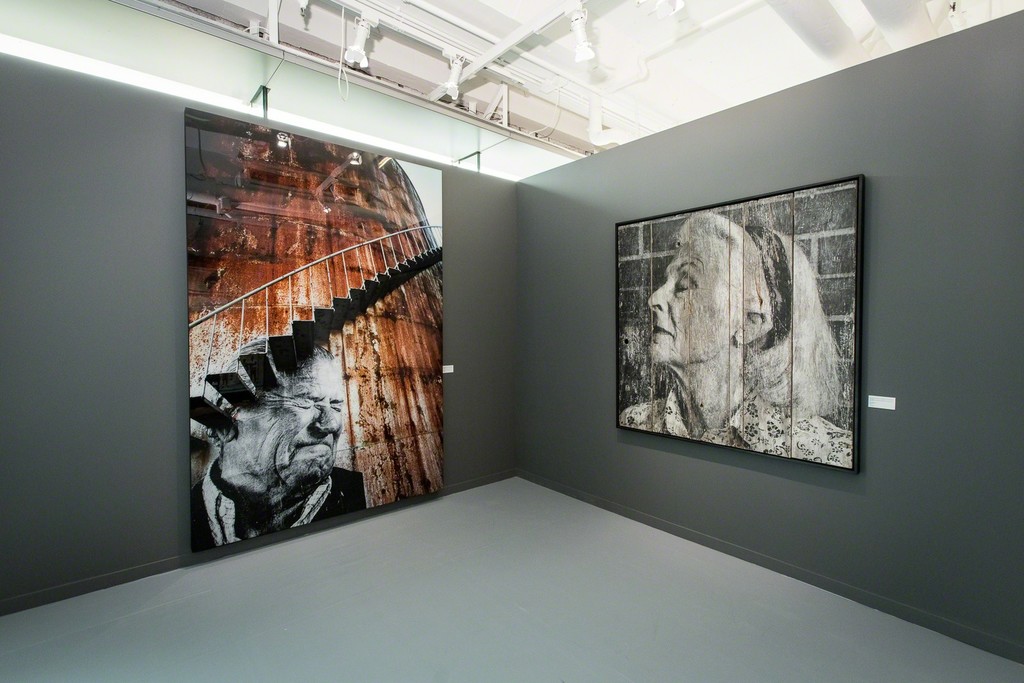 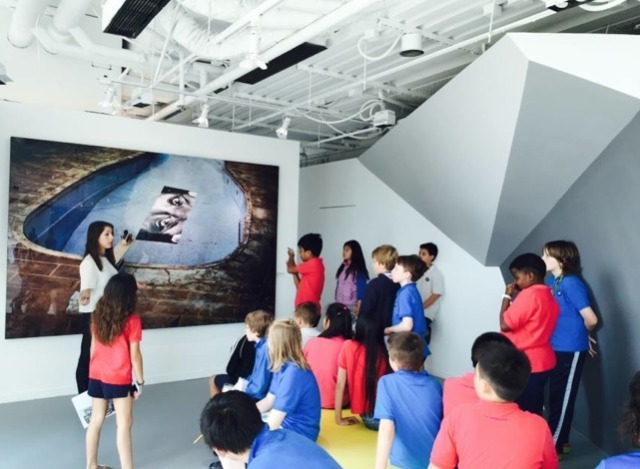 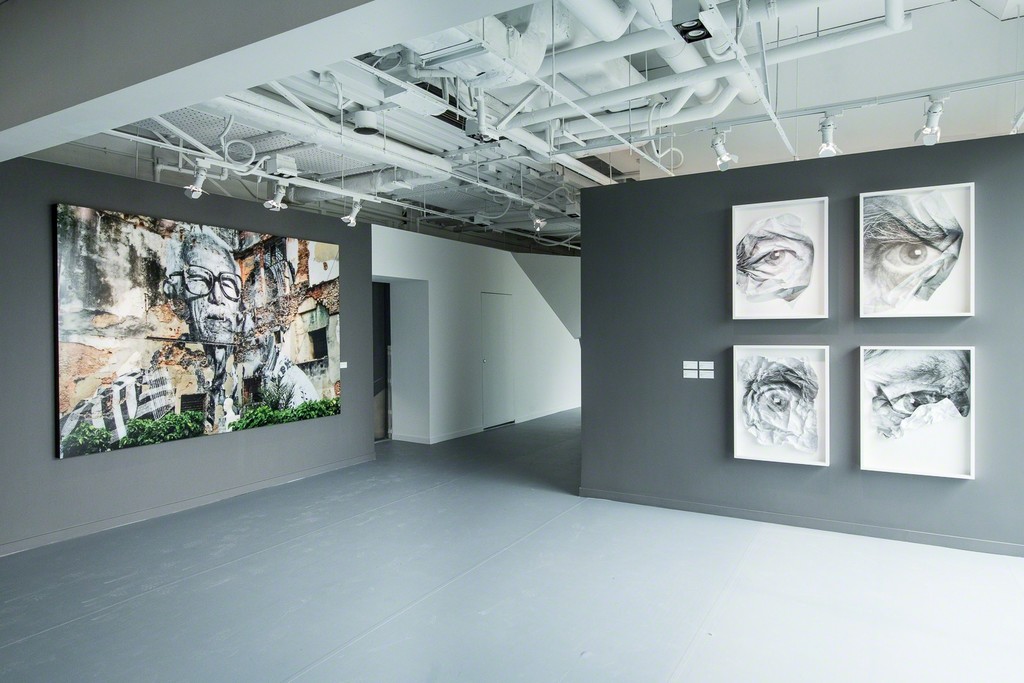 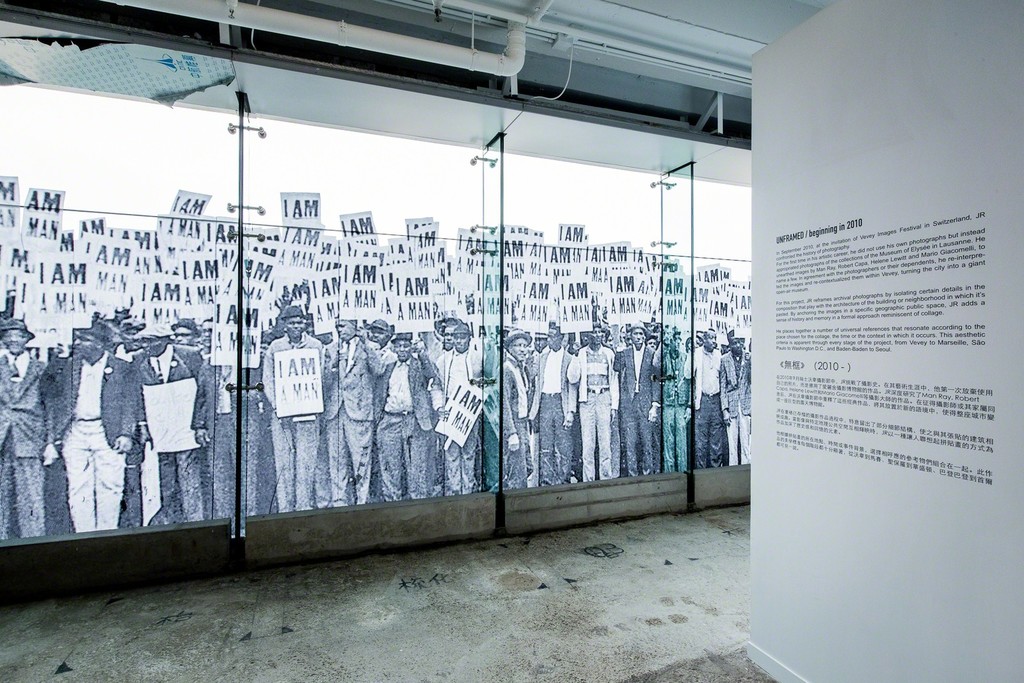 HOCA Foundation presented representational pieces from JR’s most notable series – starting from his photographs taken in the Parisian suburbs in 2004, just before the riots of 2005. Beginning his artistic career at the age of 17, JR happened upon a camera on the Paris subway and began pasting portraits in the eastern suburbs of Paris, Montfermeil, Les Bosquets. These images confronted the residents with their own caricatures and questioned the social and media representation of a specific generation raised on the outskirts of the city. When the riots shook in 2005, JR reacted to the one-sided portrayal of his peers in everyday media, and thus he began photographing suburban residents making exaggerated, aggressive and humorous faces, this time pasting them up throughout Paris’ more bourgeois neighbourhoods. This series, Portrait of a Generation, confronted viewers, privileged or otherwise, to consider the multi-layered strata of their society, a project that was later legitimized on Paris City Hall.

From there, the artist went on to produce works on the separation wall – security fence between Palestine and Israel in a series titled Face2Face in 2007. JR illegally ado separation wall – security fence the wall with large portraits of ordinary citizens with the same occupation of both ethnicities and religions, forcing the viewer to question who each person was and whether a difference could be made. According to the artist, this was the largest illegal photography exhibition every conceptualized, one that not only seeks to bring light to a dark struggle, but also subtly comments on the possibility of a peaceful solution, giving optimism to a desperate situation.

In 2008, he simultaneously celebrated heroic women in desperate communities in his work Women are Heroes, and the elderly populations of drastically changing cities in The Wrinkles of the City. These projects led JR to win the TED prize in 2011, a prestigious honour whose previous winners include Bill Clinton and Bono. The prize awarded him US$100,000 to fund a project to make one wish for the betterment of society. JR thus formed the idea for his continuing Inside Out project, a global participatory project which invites people to print and paste up large portraits around the world to inspire community action and present individual stories. Since 2011, more than 200,000 posters have been posted in more than 130 countries.

“Art has never changed the world, but it can change your vision – and that, for me, is already changing things.” – JR

The survey exhibition hosted by HOCA Foundation will include artworks from each of the acclaimed projects above, along with a photo booth for visitors to engage with and continue JR’s Inside Out project. The exhibition will also feature a screening room to display videos showcasing the artist’s creative undertakings.