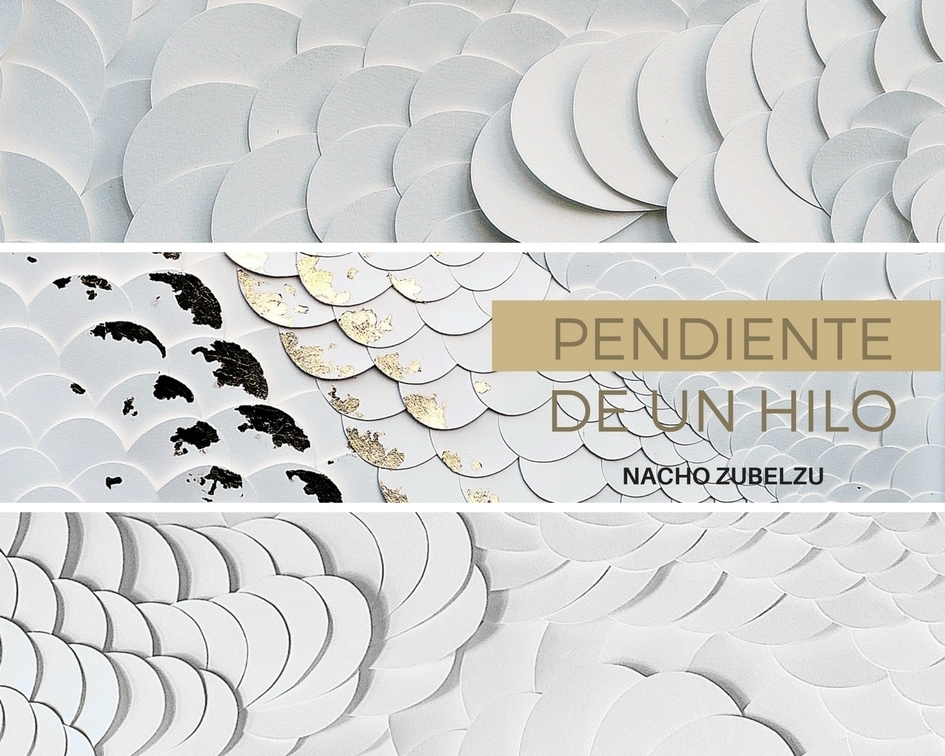 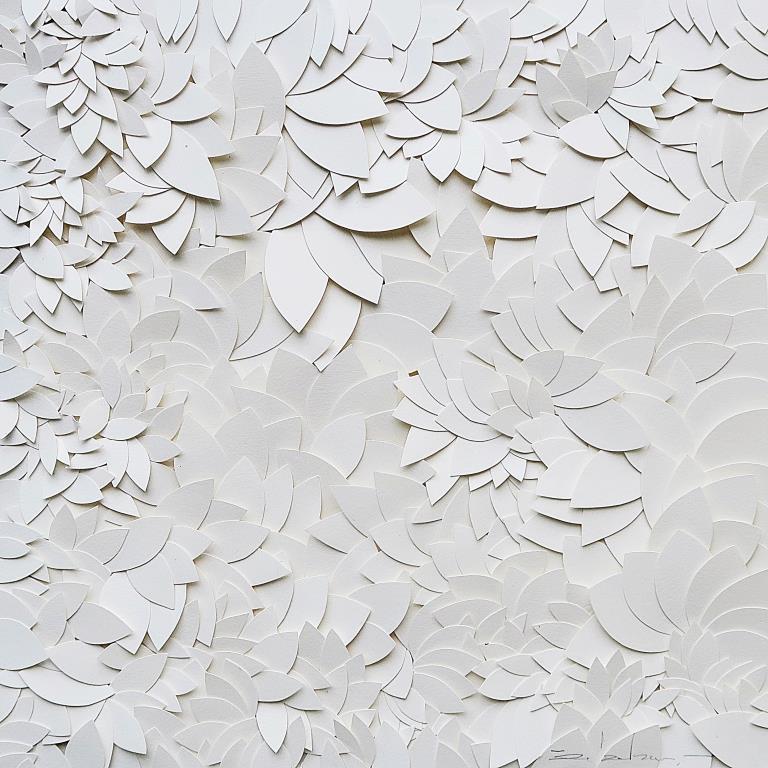 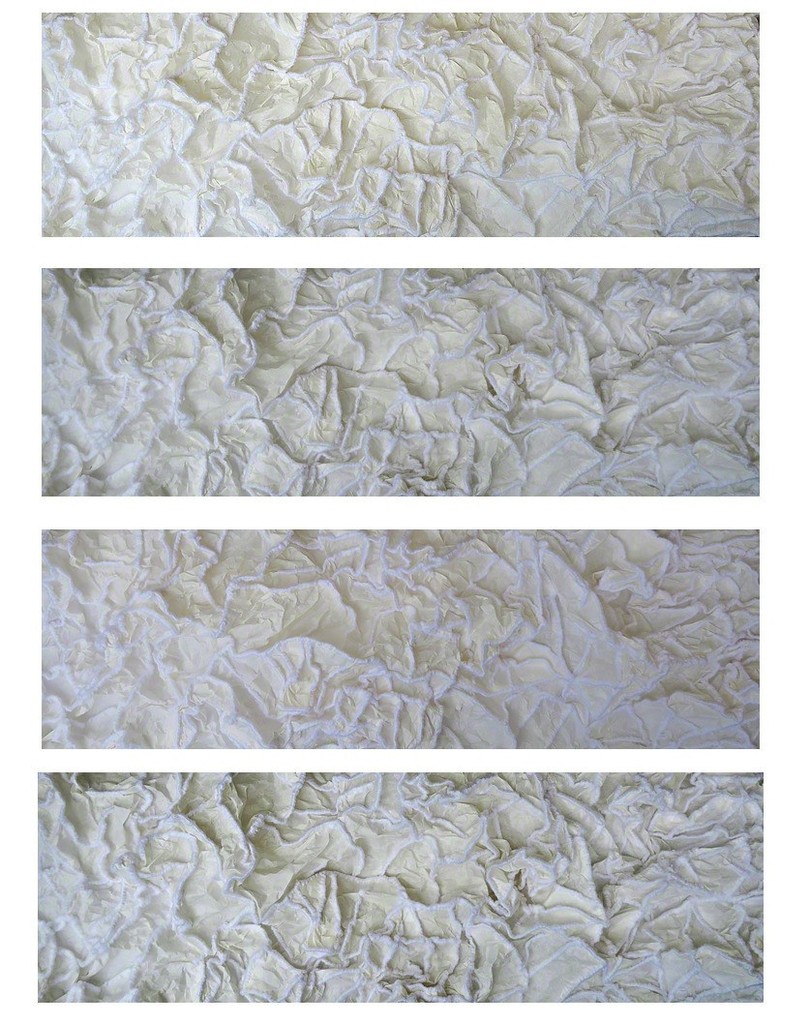 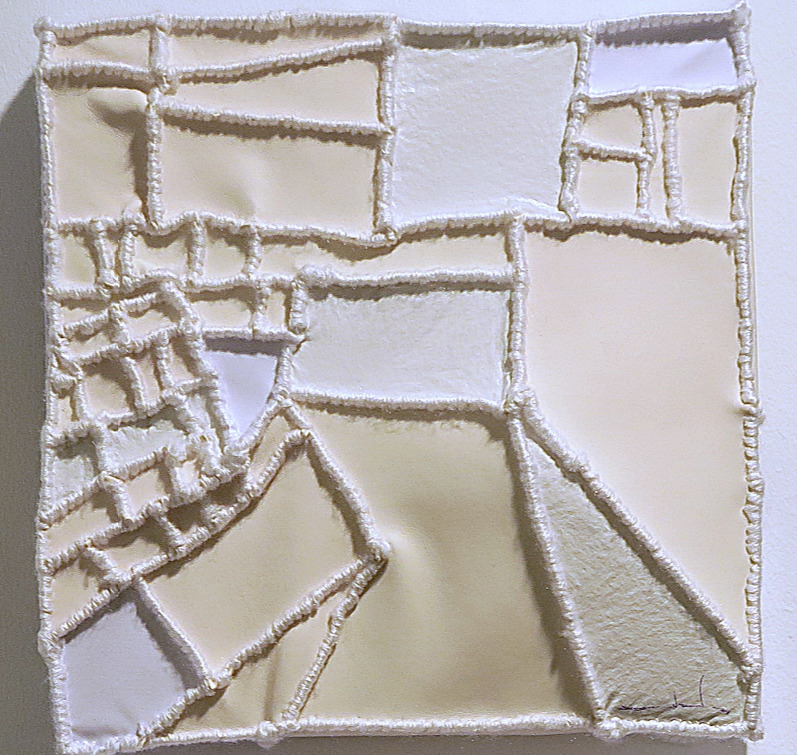 “Pendiente de un hilo”, meaning “Hanging by a thread”, is the 13th exhibition hosted by the Italian-Spanish art gallery Honos Art. The main theme of the exhibition is nature, or rather the representation of its memory that nestles in our subconscious. Nature, as remembered or recalled in malleable images.
Themes such as snow, the transhumance of herds and beloved mountains are told in an innovative way which surpasses regular painting by utilising unusual materials such as paper, laminated leather, thread, faux leather, wool, gold leaf and radiographic film on the canvas. Thanks to these materials and through skillful manipulation, the artist recreates incredibly powerful images of untouched wilderness. He re-enacts mountain ranges as seen from satellites, which appear as mazes on the land that root themselves in the subconscious and human emotion. The artist’s desire to utilise creative processes that involve hand-crafted expertise and anthropological notions translates into a series of repeated images, secret obsessions that become point of reference during the nomadic flow of the journey.

In today’s world, the fluid expression of the Spanish artist is at once condemnation and suggestion. It is the memory of an instant, the emotion of a moment, invoking a sense of wonder from its creation. His thinking parallels Andy Goldsworthy’s conception of art as an extremely valuable tool in understanding nature. Nacho Zubelzu loves crystallising the moment as a tangible sign of eternity.

Nacho Zubelzu (Reinosa, 1966), is a world-famous “nomad” artist. He loves travelling and immersing himself in local cultures. His recent travels through Kenya, Gambia, China, Mongolia, Chile and Brazil have inspired his latest works, leading him to internalise the beauty of the natural elements and to convey this beauty through fluid shapes in his paintings, photographs, sculptures, grand installations, performances and illustrations. The artist has never made a clear distinction between painting and sculpturing, rather considering them complementary forms of art. Zubelzu utilises repetition and variation in his works, thus generating sequences that analyse ideas, sensations and feelings. Winner of numerous accolades including “Best Cantabrian Artist” in 2004, the artist has seen his works exhibited all over the world, including in Beijing WhiteBox gallery in 798 art district in 2016 and in Cervantes Institute in Tokyo in 2014. He has participated in various art fairs such as JustMad Contemporary Art Fair in Madrid in 2017, Setup Art Fair in Bologna in 2016 and Art Beijing Fair in China in 2014.