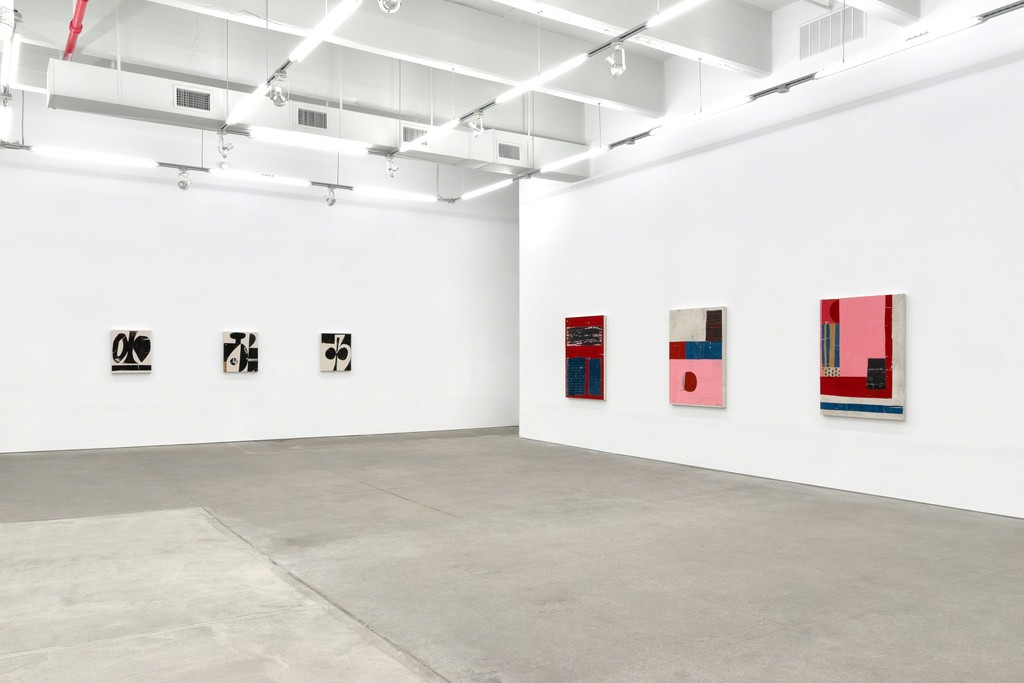 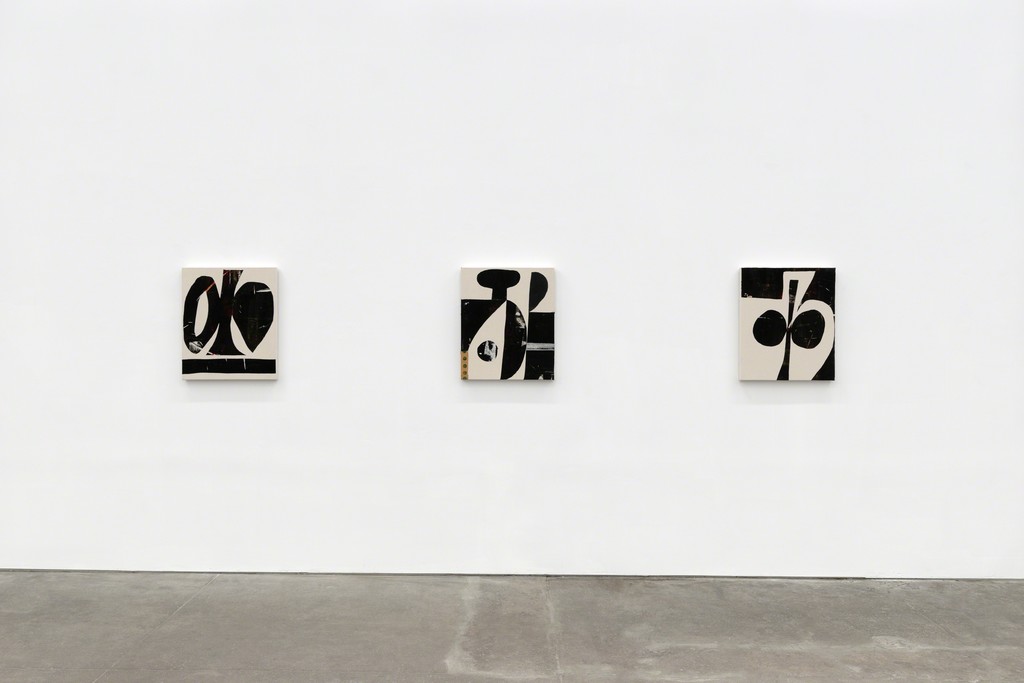 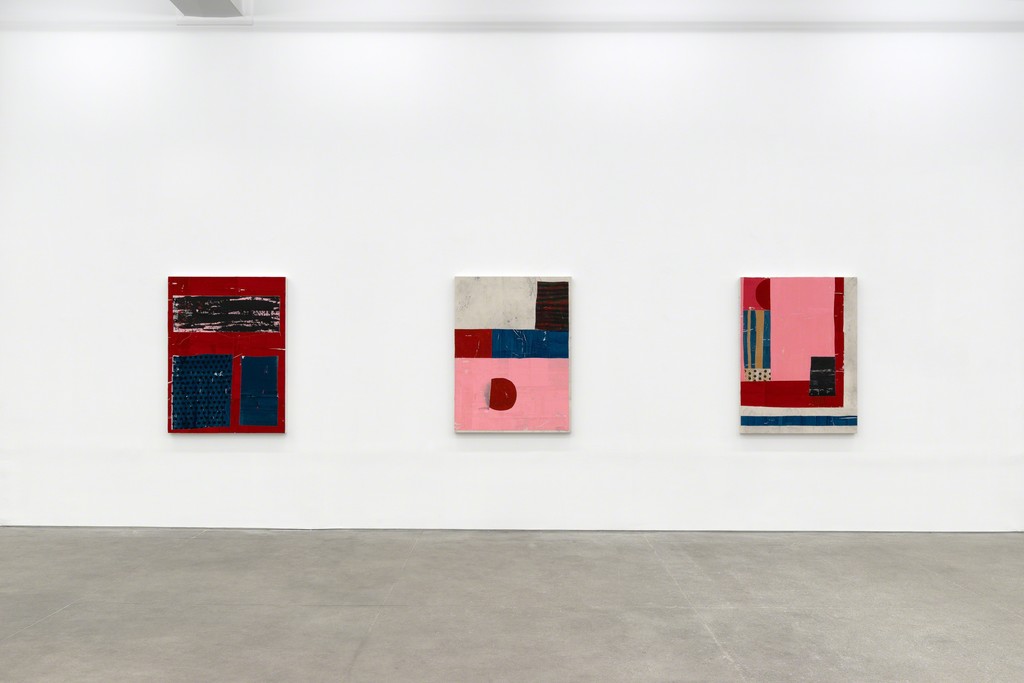 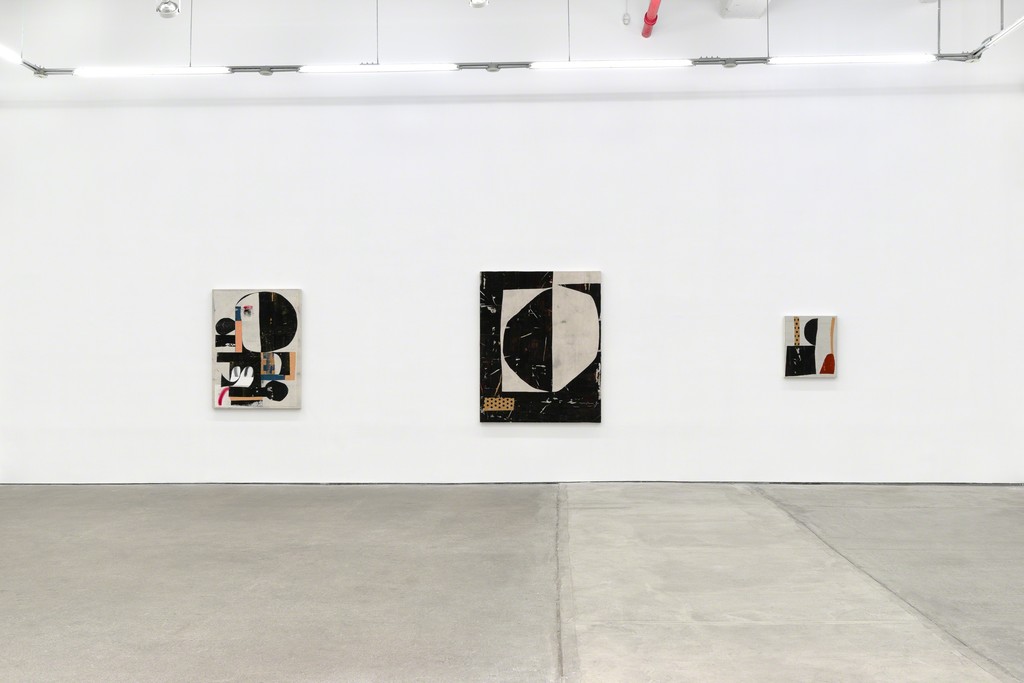 In his New York solo debut Jesse Littlefield presents a series of paintings that merge the immediacy of screen-printing and collage with the expression of gestural abstraction.

Preferring the limited palette, matte surface, and viscosity of screening ink instead of paint, the artist uses image-free silkscreens to squeegee color onto swaths of lightweight muslin. Once a sufficient amount of painterly material is accumulated, he cuts, manipulates, and applies the fabric shapes to form geometric compositions. From its use as a mesh tool (silk) to a vehicle for color (muslin) to a painterly ground (canvas), the various fabrics are exploited for their range of absorbency as well as their familiarity. With the tactility of t-shirts, wheat-pasted posters, or wallpaper and the presence of an Ab-Ex canvas, there is a striking blend of the graphic and the gestural in the artist’s color choices and compositions.

While there is a drawing-like struggle to the process of intuitively cutting shapes with scissors (revealed in the exhibition’s title Dull Knife Fight), Littlefield relies more heavily on the intentionality of masking and blocking. In an earlier series of works on paper (seen last year at the Institute of Contemporary Art, Boston), the artist screened bold, black rectangular shapes onto found magazine pages. The resulting works established a clear sense of figure and ground reminiscent of misprinted Xerox copies or the paintings of Robert Motherwell. Using these works as a starting point, the artist has retained a sense of intervention while orchestrating more complex and dynamic formal relationships.

Even in our era of anything-goes-abstract-painting the artist manages to employ a rebellious sense of handling materials while still creating modest and direct works that show an appreciation for artists as vast as Gerhard Richter, Henri Matisse, and Jean Arp. To almost photographic effect, the hard pull of the squeegee sometimes creates gestures to be found and assembled. Evocative of Roy Lichtenstein's Brushstroke, Littlefield's Black Blue and Red All Over (2014) positions a gestural smear above Ben-Day dots next to an imperfect blue rectangle – all upon a Crimson red field. While referencing its own formal qualities, the title (like his Instagram moniker Bad Fog borrowed from a Neil Young song) also hints at past personal experiences now being reconciled through his studio practice.

Born in 1977, Jesse Littlefield was raised in Massachusetts. He was recently featured in a two-person exhibition with Sadie Laska at Harper’s Books in East Hampton, NY and Bad Fog curated by Eddie Martinez at Martos Gallery in New York. In 2013 Barry McGee included Littlefield's work in his show at the Institute of Contemporary Art, Boston. Littlefield has been mentioned in the Huffington Post, Paper, and Interview magazine, among others. Dull Knife Fight is the artist’s first show with the gallery, as well as his New York solo debut.