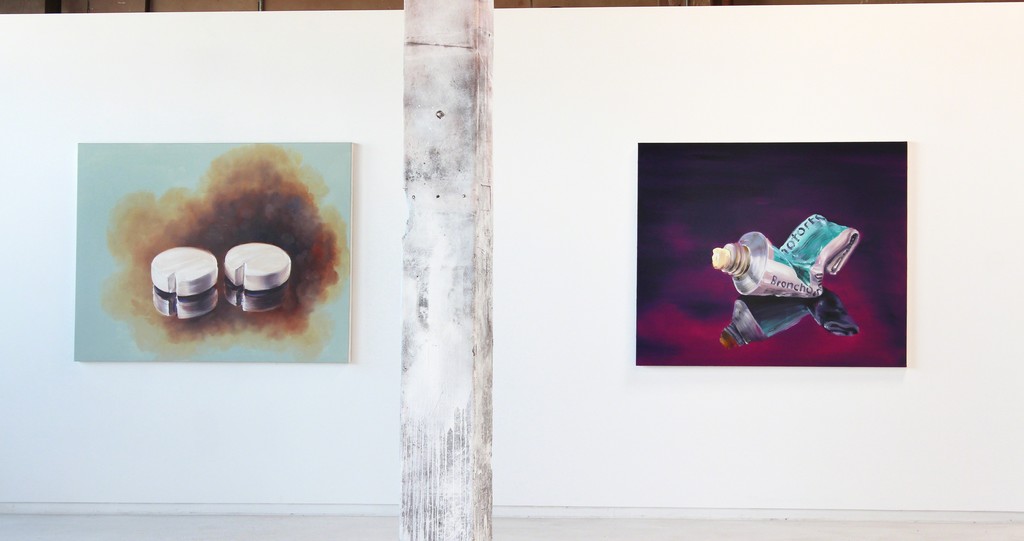 In his first solo exhibition on the West Coast, German artist Cornelius Völker, painting with extraordinary prowess and sensuality as well as uncanny awareness and insight, chooses traditional genres—the still life and portrait—to explore and decode the history of representational painting.

Frequently choosing subject matter that was used by painters for centuries to best exhibit their proficiency—hair, hands, flesh, glass, food—Völker’s works blur traditional distinctions between genres, each painting becoming both a still life and a portrait. Isolated in a painterly void, a stack of books reads as a standing figure while art catalogues left open, pages bristling with post-it bookmarks, recline like Titian’s "Venus of Urbino." The back of a woman’s head, with an elaborate coiffure, is a coil of rope or a golden loaf of twisted bread.

Whether or not actually figurative, nearly every work that Völker paints refers to the body: pills to ingest, ointments to rub into the skin, viscous fluids, cigarette stubs or half eaten fruit. A plate of oysters, in its similarity to female genitalia, points both to the origin of their alleged power as aphrodisiacs and to Dutch painters’ use of food and flowers to refer to the brevity of human life. The stub end of a candle reminds us of Macbeth‘s soliloquy and that life’s ultimate conclusion is entropy and death.

This survey of work from the last fifteen years reveals a consummate painter and smart artist who masterfully plays on such diverse historical precedents as the tradition of 17th century Dutch still life painting, Giorgio Morandi, Wayne Thiebaud, Richard Avedon, Gerhard Richter, Fredrick Sommer, Édouard Manet and Ed Ruscha. Painting, though declared dead in 1839 by Paul Delaroche and frequently reasserted ever since, continues to attract and enchant us perhaps like no other medium. In the hands of an artist as knowledgeable and skilled as Völker, it’s easy to see why.

Cornelius Völker was born in Kronach, Germany in 1965 and studied at the Kunstakademie Düsseldorf. He is a professor of painting at the Kunstakademie Münster. His work has been the subject of many solo museum shows throughout Germany and Europe. This exhibition is his first solo show on the west coast of the United States.