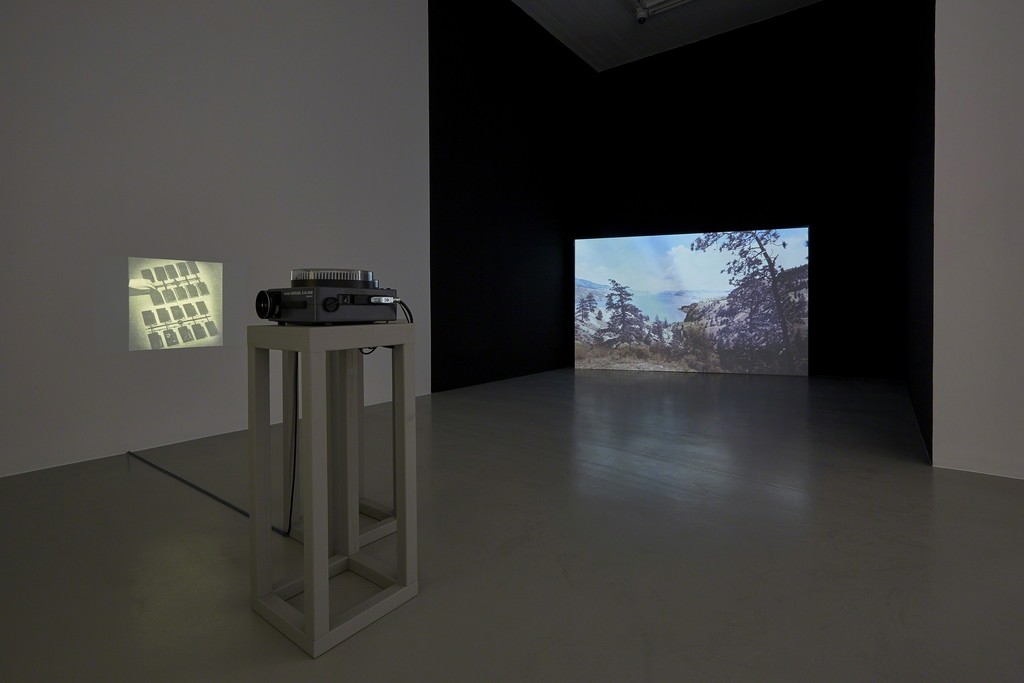 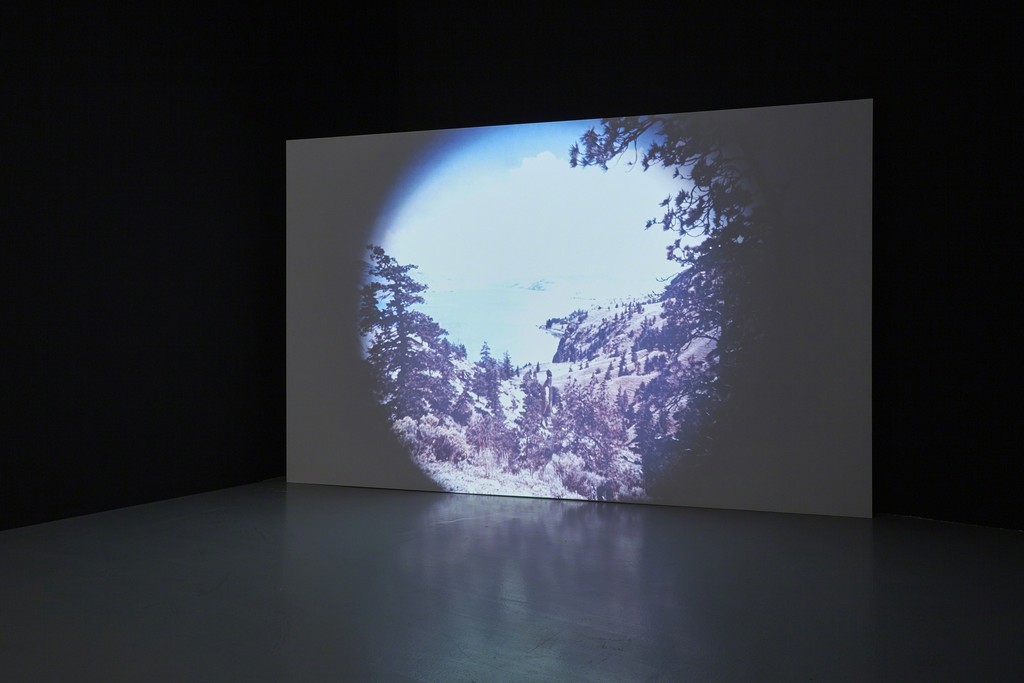 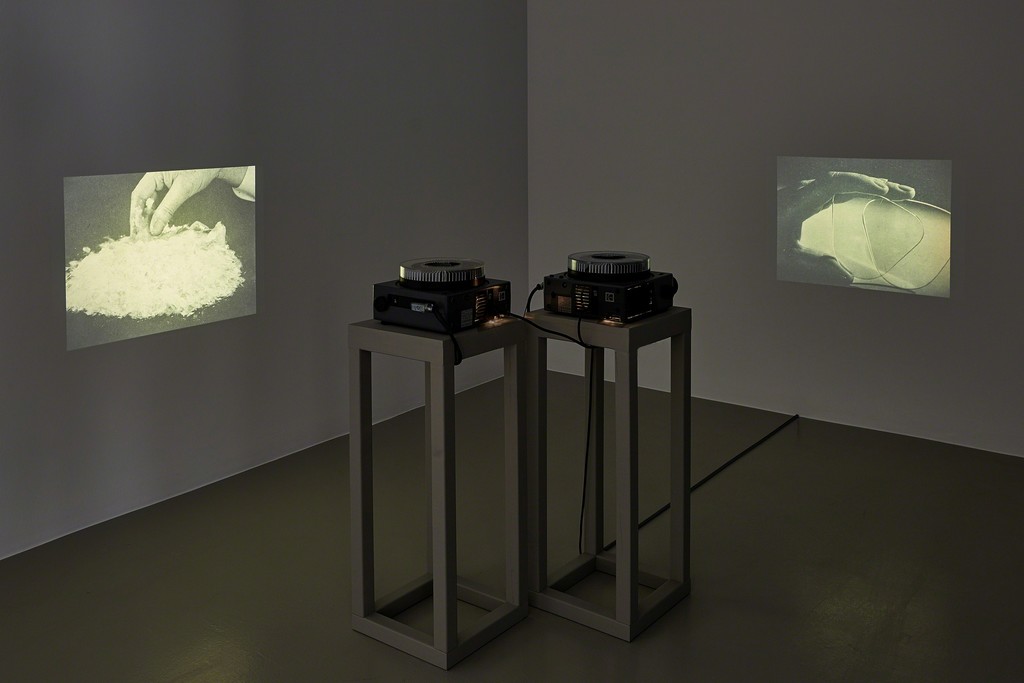 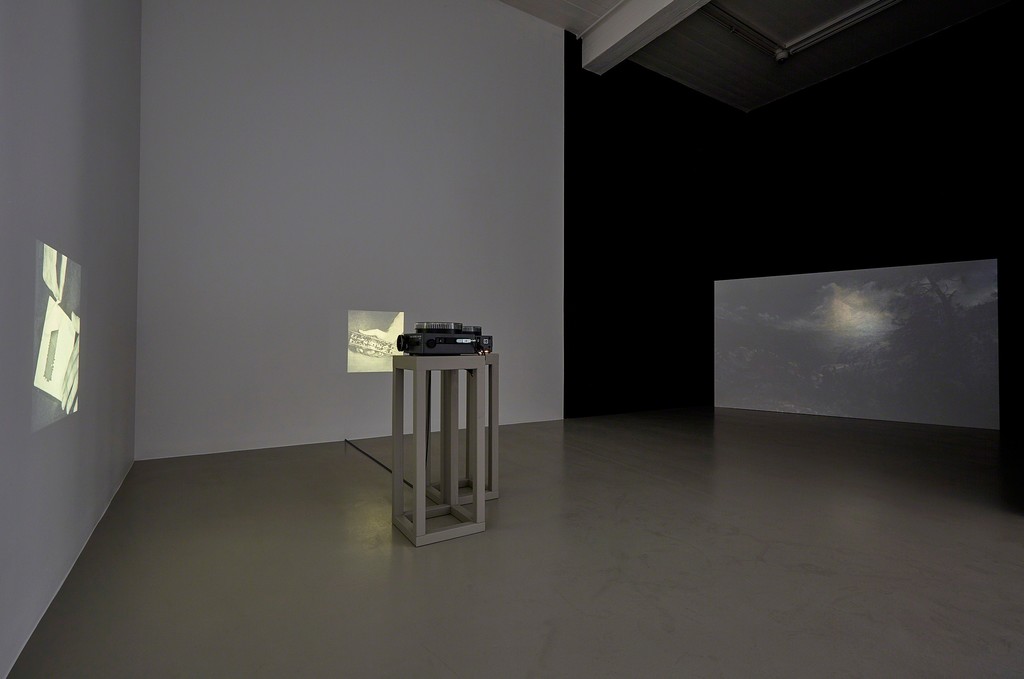 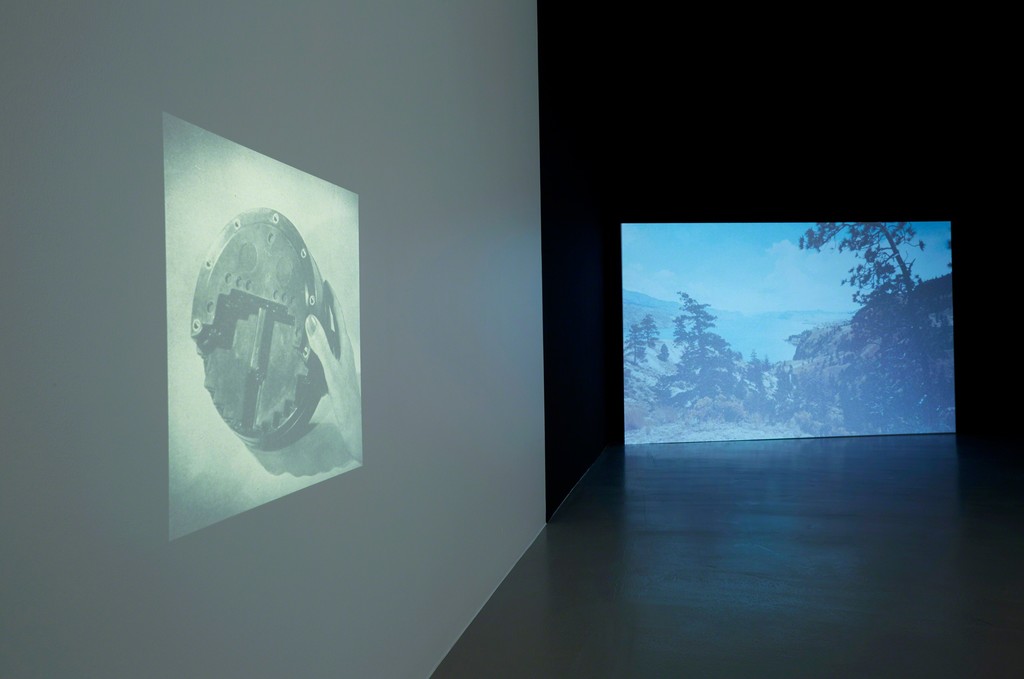 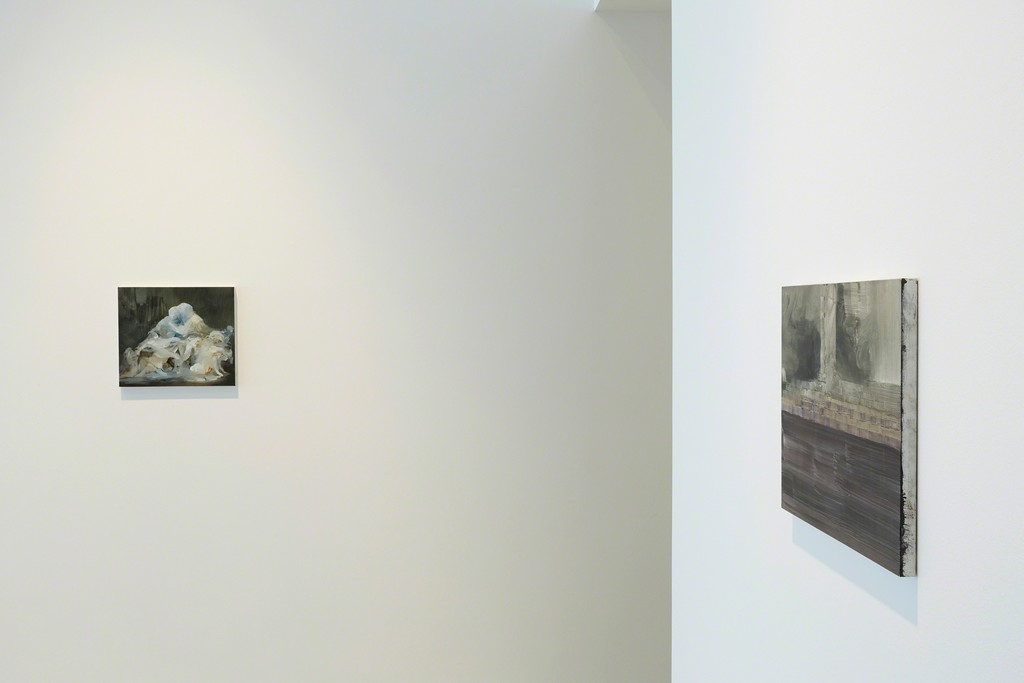 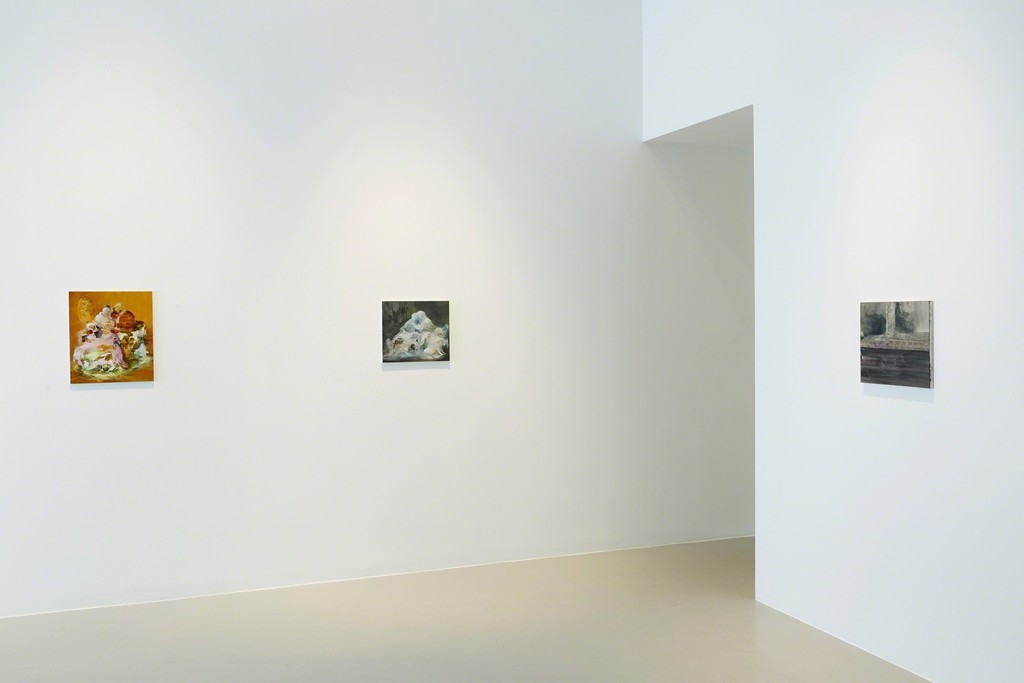 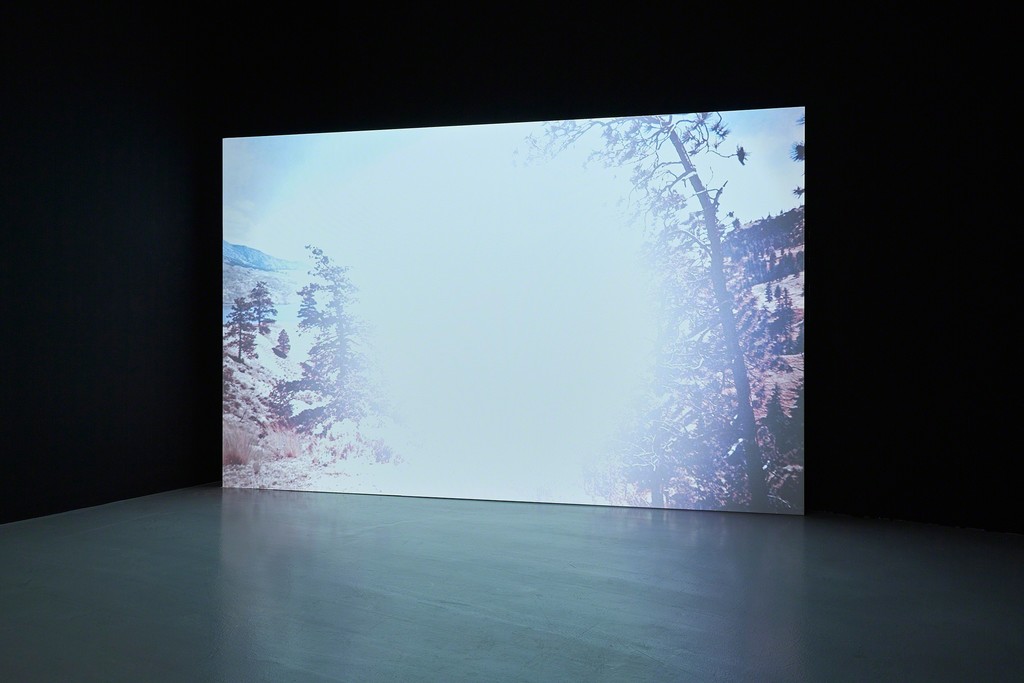 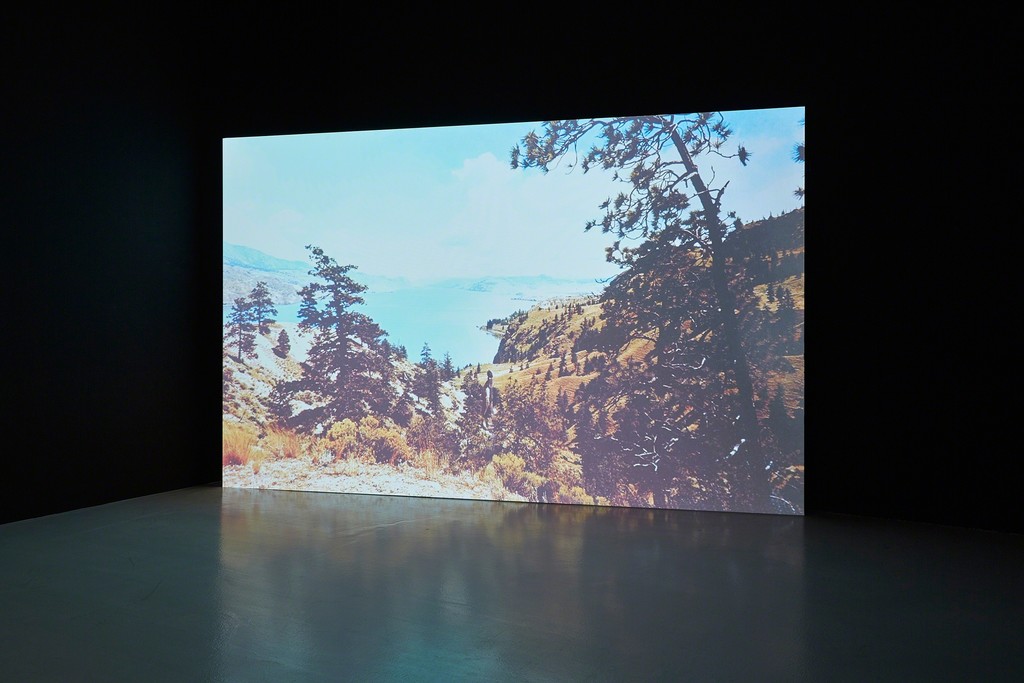 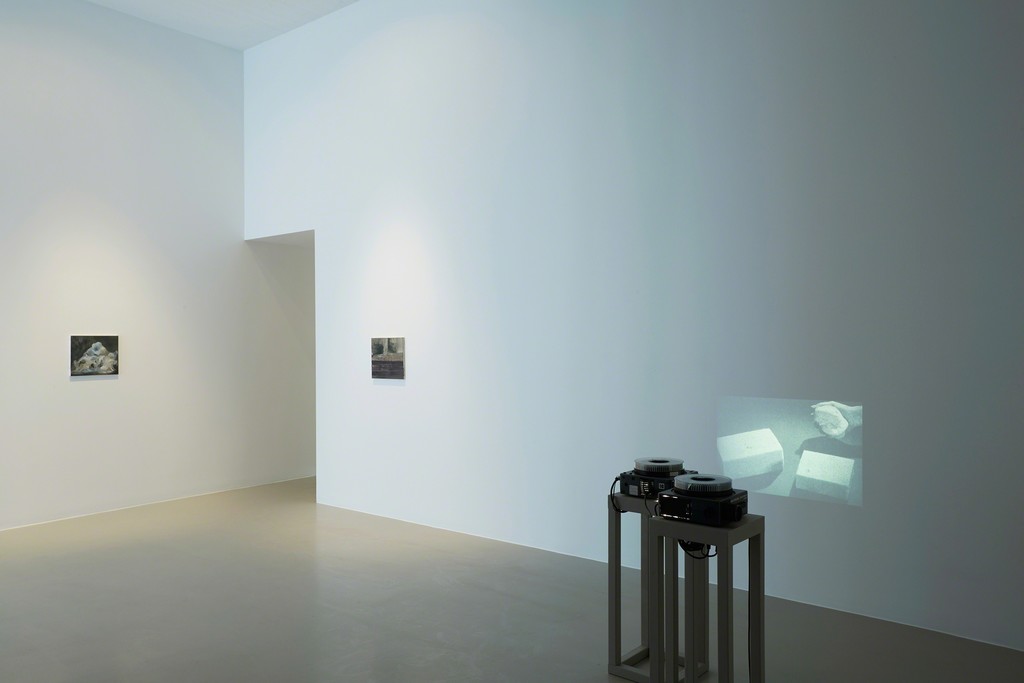 The exhibition brings together a selection of works by three artists; Alexandra Navratil, Erin Shirreff and
Lara Viana, that build on fragmenting and re-shaping archives and memory. The work investigates issues of
reproduction and the layering effects of media from multiple perspectives of personal and public territories.
Lapses in time and scale telescope through transposing processes and techniques, and manifest in slide
projections, paintings, photographs and video. This is the first time all three artists show at i8 Gallery.

When we perceive an image, we are not just seeing its subject or its surface, we are seeing a combination
of all the physical and chemical techniques, whether in paint, print or on film, used to create it; we are
seeing how the material properties of that image, when viewed as an object, may have been manipulated or
deteriorated over time; we are seeing the context in which that image has been presented and we are seeing
all of these layers through the filter of our own personal knowledge, experience and associations. Alexandra
Navratil, Erin Shirreff and Lara Viana are three artists who deliberately foreground these elements, enabling
the viewer to slow down the act of seeing in order to reveal those processes, psychologies and histories.
When viewing Lara Viana‘s paintings the eye constantly toggles between brushstroke and subject; past and
present, flat surface and layered depth. The marks made by adding, rubbing, scraping and wiping paint away
are as prominent as the indistinct forms and compositions they suggest. These ambiguous subjects could
be based on old paintings or photographs; A set of steps? A group sitting? A couple kissing? Their muted
colour palette, often monochromatic browns and blue-greys, also hints at the reproduced image, degraded
or become faint. But Viana transforms them into something more personal and intimate and transports them
here, now. Then there are the areas of ghostly translucent white, giving the impression of shapes emerging or
dissolving, as if one were not looking at Viana’s paintings but right through them.
The transformation in Alexandra Navratil’s installation Modern Magic (2013) has an alchemical feel. Not only
in its subject, 162 images highlighting the initially revolutionary properties of plastic, taken from the pages of
Modern Plastics magazines (1934–2004), but in the artist’s treatment of them. Analogue photographs, some
no doubt originally made on slide film, printed in magazine pages and then subsequently digitised into an
archive, are transferred by Navratil back into slides. Shown on two projectors, the images are split into those
depicting hands manipulating the various shaped plastic objects, to demonstrate their flexibility, and hands
showing the objects for display. This multiplicity of images might also remind of a benign form of ‘duplicity’.
In her doubling of projectors and use of images of close-ups of hands, Navratil’s installation is a visual
reference to another form of magic, the misdirection and sleight of hand of the conjuror’s ‘reveal’.
Erin Shirreff uses multiple images in a different way. In her silent video Lake (2012), she takes a 1980s tourist
photograph of Lake Okanagan, in her home territory of British Columbia, digitally photographs it under
different light conditions and transforms the images into a digital animation. Reminiscent of John Martin’s
dramatic Last Judgement triptych, (1851-3) and the theatrically animated, painted dioramas also popular
at that time, the light effects not only mimic the moods and emotions associated with different weather
conditions and times of day – uplifting bright sunlight, a romantic orange sunset, a dark stormy sky, but also
mimic the process of analogue photography itself. At one point the image gradually fades into grey, as if
there were a mist rolling in, or a blizzard white-out. When the details re-emerge, it’s as if the viewer were
watching a photographic print, emerging from a tray of developing fluid.
In an age of mass reproduction and quick-swipe, digital image overload it‘s easy to forget that in some way,
all images are carefully constructed illusions. These works by Shirreff, Viana and Navratil show how these
illusions come into existence through a series of transformations. These images collapse scale and travel
through time and space, carrying with them not only the imprint of the objects they might represent but
the history of all other reproductions of that image, not only reintegrating the emotional and psychological
impact an image holds with its subject, but also reintegrating the memories of all that image‘s past selves.
Helen Sumpter
Alexandra Navratil (b. Zurich, 1978) lives and works in Amsterdam and Zurich and is a lecturer at Institut
Kunst in Basel. She studied at Central St. Maritns Collage of Art and Design, London (BA Fine Art, 2002)
and at Goldsmiths College, London (MFA, 2007) She has had recent solo exhibitions at the Centre Culturel
Suisse Paris; BolteLang Zurich; Dan Gunn Berlin; SMBA, Stedelijk Museum Bureau Amsterdam (all 2014)
and Kunstmuseum Winterthur (2013). She was awarded the Canton of Zurich’s Manor Prize (2013) and the
Swiss Art Award (2009 and 2012).
Erin Shirreff (b. British Columbia, 1975), lives and works in New York City. She studied at the University
of Victoria (BFA, 1998) and Yale University (MFA, 2005). She has had recent solo exhibitions at Sikkema
Jenkins & Co., New York (2015); Artpace, San Antonio; the Contemporary Art Gallery, Vancouver; and
Yerba Buena Center for the Arts, San Francisco (all 2013). Upcoming projects include a solo exhibition at
the ICA, Boston (from August 2015).
Lara Viana (b. Salvador, Brazil, 1970) studied at the Foulmouth School of Art (BA Fine Art, 1995) and at
Royal College of Art, London (MFA 2007). Solo exhibitions include shows at Domo Baal in London (2010);
De-Expeditie, Amsterdam and Conrads, Düsseldorf (both 2011). She was selected for Bloomberg New
Contemporaries 2008, East End Academy: The Painting Edition, Whitechapel Gallery, London, 2009 and
SV10: Member’s Show, Studio Voltaire (2010). She was awarded the São Paulo Biennial Exhibiting Award
(2001).