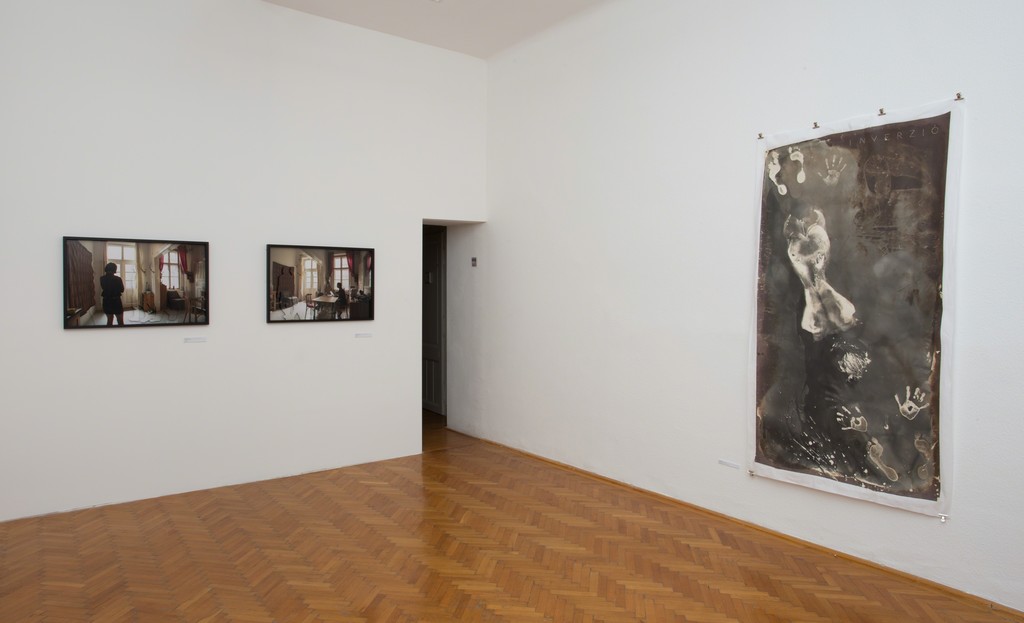 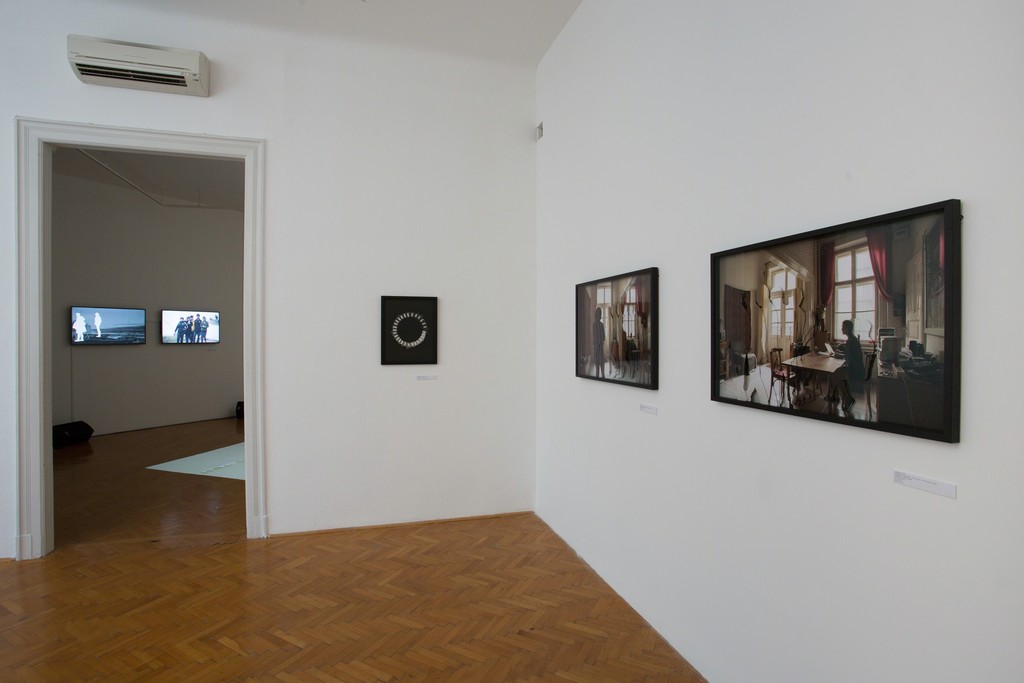 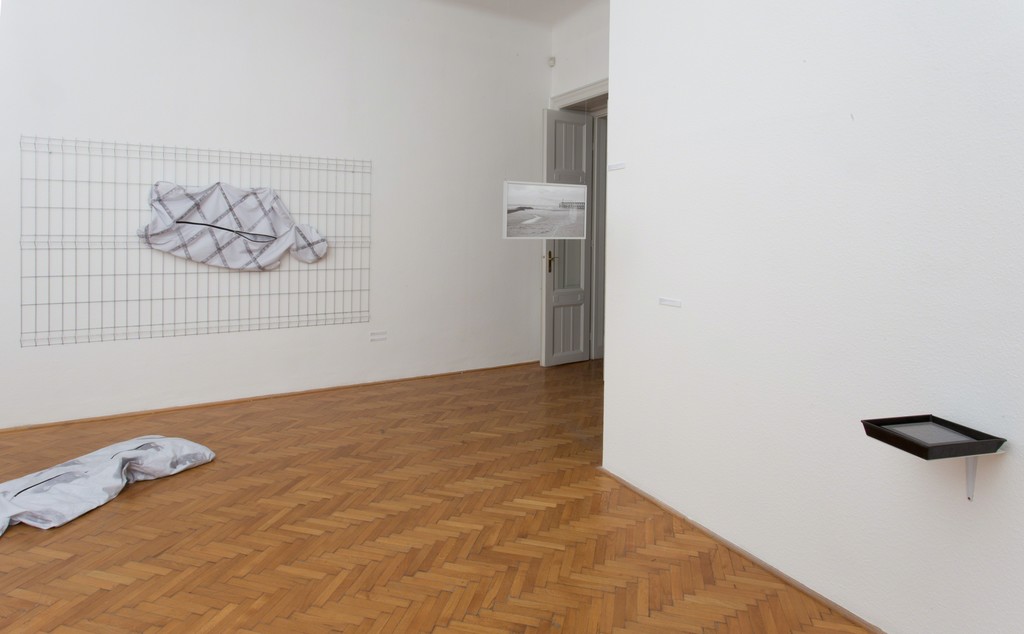 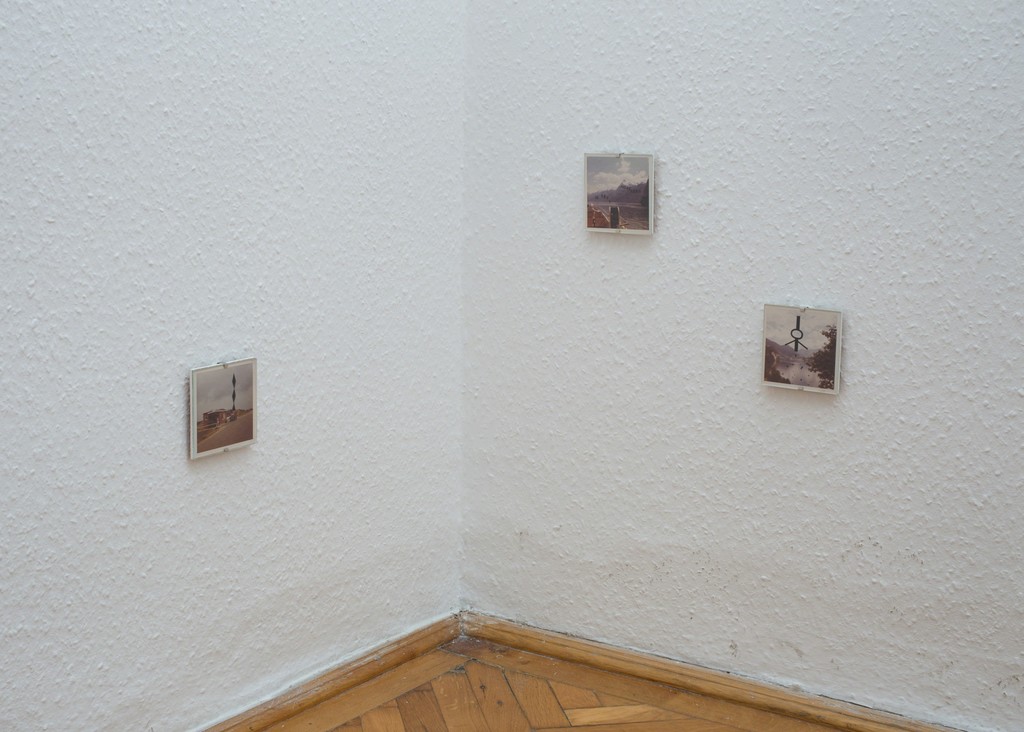 Works by three artists, Marianne Csáky (HU), Ágnes Eperjesi (HU) and Agnieszka Grodzińska (Pl) have been arranged in the gallery’s spaces, in the hall and the three rooms, according to a curatorial concept.

Obviously, the works are very strong in themselves, each of them is a full world on its own. In this exhibition, they are placed in a way that highlights several of their abundant aspects, stretching lines between them. These lines connect the works like chords of an instrument. The chords connecting their conceptual, formal, intellectual, emotional content or techniques resound in accords, or discords.

Let us go through this exhibition exploring it according to one possible map drawn by these chords or lines. Let me emphasize: the map I propose here is only one of many possible maps.

The exhibition takes place in three, or rather, four spaces.

1) The hall and the first room belong together, they present photo-based works, collages and photograms. Here, the artists use photographic or photo-related methods to represent movement, to grasp movement of the body, time and notions.

2) The second room shows videos, that is, works where the images move. What happens here, is, in fact, the opposite of what happened in the first room. Here, the artists freeze the images to explore their universal and timeless momentariness (Csáky) or they represent the birth of words, the formulation of the idea, a concept, notions from the gray nothingness (or everything) by way of constant motion (Eperjesi); or, instead of benefiting from the showing motion, like they do in the first room, the artist presents the limits of motion, and thereby the claustrophobic limits of personality and freedom by rolling from wall to wall (Grodzińska)

3) After still images in the first room, moving images in the second, the third room displays works where the photo-related images break into the third dimension and become objects.

The exhibition starts with Eperjesi’s photogram of falling domino tiles. She placed the emblematic, universal figure of the exit sign on plexiglas dominos she made herself, to record their fall into disorder, into a kind of chaos, where the icon normally used to show the exit is captured in the crowd of its falling alikes to present the suffocating experience of being lost, losing identity losing meaning in the crowd.

This is where the journey starts, with Grodzińska’s small, UFO-like images, a series of found polaroids that she appropriated by inserting small images in them. The series is called Unsentimental journey, and its pieces pop up at unexpected places throughout the exhibition. In fact, they perform the same act on the exhibition as the artist performs on the original photos by inserting alien objects in them: they pop up unexpectedly, and generate extra meanings by their presence (also mocking and inspiring laughter at places by forcing the viewers to literally change their point of view, their perspective).

The journey continues in Csáky’s Time tunnel series. These two photo-based collages show the various phases of a person leaving, and so, they change the tone of the journey from unsentimental to sentimental (in the good sense of the word), or poetic, and personal. By presenting the various stages of the act, they represent the desire to be able to walk back and forth in a time tunnel, to be able to reverse cross time. The human figures in these two works stand (and move) like the tiles in Eperjesi’s second piece of the domino series placed next to them in this room. Here the tiles have already lost the human figure – in other words, the human figure has been abstracted away.

On the wall across the room from this piece hangs Eperjesi captures the liberating movement of a somersault in her work (1988), where she used her own body, applying photo-chemicals to it, to fix the image of her movement. The body performs the somersault upwards, giving the impression of liberating itself even from the force of gravitation.

The chords that connect this work made in 1988 with the one placed on the opposite wall (Prism rolled systematically) stretch across time as the latter work was made between 1988 and 2015. In this series of photograms, the human body is abstracted away. Here, the photogram method is not used to record the movement of the human body, but of the movement of another type of body, a basic optical object, to explore and present the birth of the image.

Of course, the UFOs pop up in this room too. Reinforcing Eperjesi’s large work by way of a kind of mockery, the tiny photos forcing the viewer to perform almost the same act as Eperjesi does in hers: you need almost to make a somersault if you want to see them…

The motive of the rolling prisms is repeated in the arrangement of Grodzińska’s video (Turlanie). Here, by multiplying the bare walls that limit the rolling body’s movement, raising the number of these walls from 3 to the power of 3, the claustrophobic suffocation becomes even more of an experience – (as opposed to the freedom of the somersaulting body in the previous room).

Starting out from a home video from the 1970s, Csáky’s Shapes seek elements in the most basic human actions, performed on the shore of a lake or the sea. Elements that are universal across space and time, ones that can serve to connect times and maybe make individual experience into universal, making possible the communication of the basics across time, space and across cultures.

Eperjesi’s 3D animantion Infinite potential presents the formulation of the idea from the gray nothingness (or everything) by way of constant motion. In this conceptual work we witness the way words, concepts are developed (like in photography) from the gray surface. And the chord from this work, the image developed from the gray, leads us to the third room…

(Of course, the UFO’s have landed in this room too, sticking their tongue at the other works.)

The room starts with Eperjesi’s video loop The last black&white portrait, placed on the wall in a photo-developing tray. The image of a young girl (Eperjesi), is developed again and again, disappearing and reborn infinitely.

Continuing the notion of the developing image, in Csáky’s Time tunnel - Blankenberge II, hanging in space in this room, the photo is developed into a two-sided, or rather three-dimensional photo-work. The tunnel leads from the image of the sea on one side to its own abstraction on the other side, and allows you to move back and forth between abstraction and concreteness, across memory and its fading.

The opposite wall of the room is taken by one object, a light box, titled The corners shift slightly by Eperjesi. Seeing the red square lit on the wall, the most immediate association is, of course, with Malevich’s black square. And, indeed, Eperjesi’s work, reflecting on the essence of the photographic method, presents the incredibly delicate lines in the wrapping material of photosensitive paper. Like Malevich arrived at the black square, containing every possible painting and its opposite, by eliminating all concrete images from the canvas altogether, Eperjesi shows the holder of all possible images at the same time, every image that can ever be developed on the paper wrapped in the red material.

Instead of reflecting the world, Grodzińska’s mirror in the corned hides most of it from the viewer. Meanwhile, her in her untitled works on the wall, the human figure is captured while trying to climb across the fence (does it sound politically topical?), with moving images captured on its body as well. When braking away from the fence, however, as opposed to what one would expect and hope, the body lies there helplessly and clumsily, instead of being liberated and joyous. Compare this to Eperjesi’s somersault…

And then, those naughty, ironical UFOs again… How dare they mock all this?!