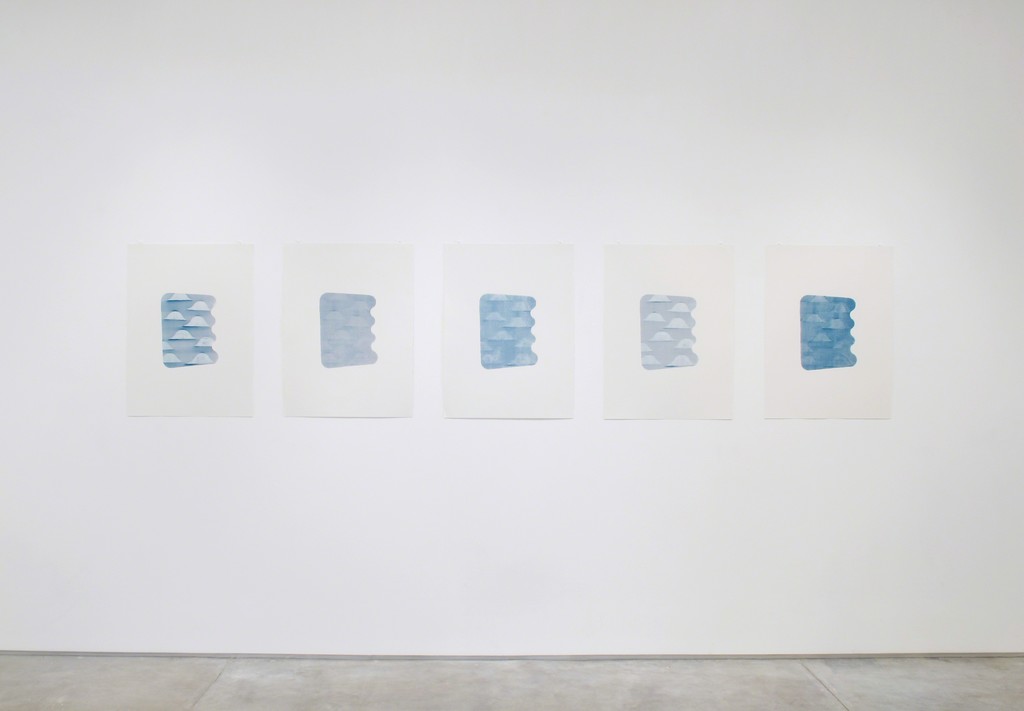 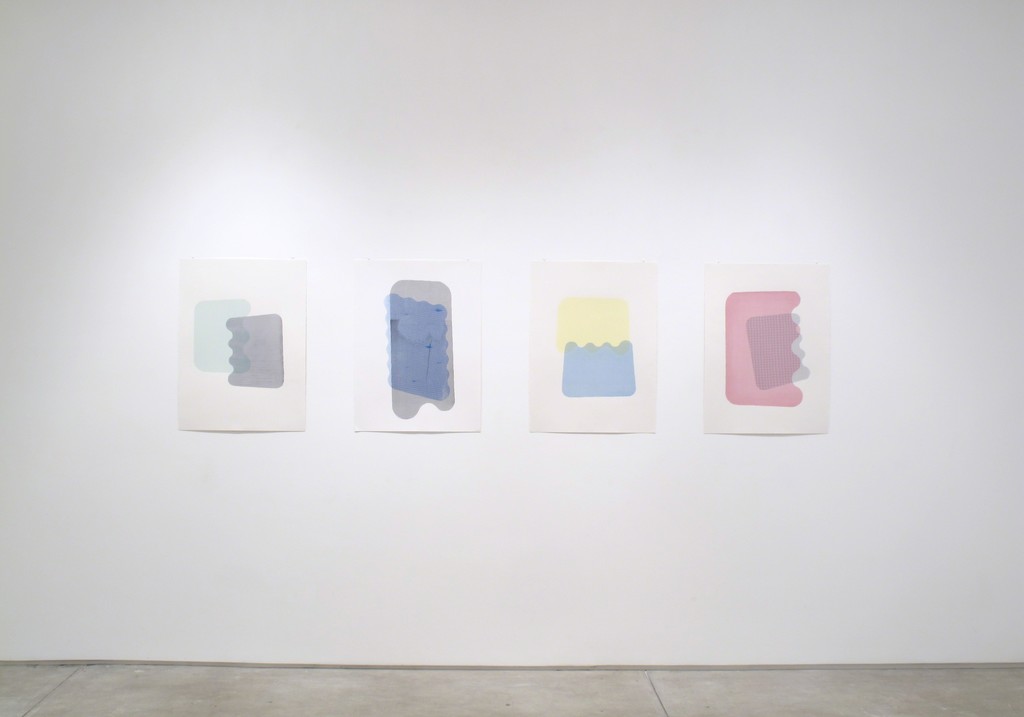 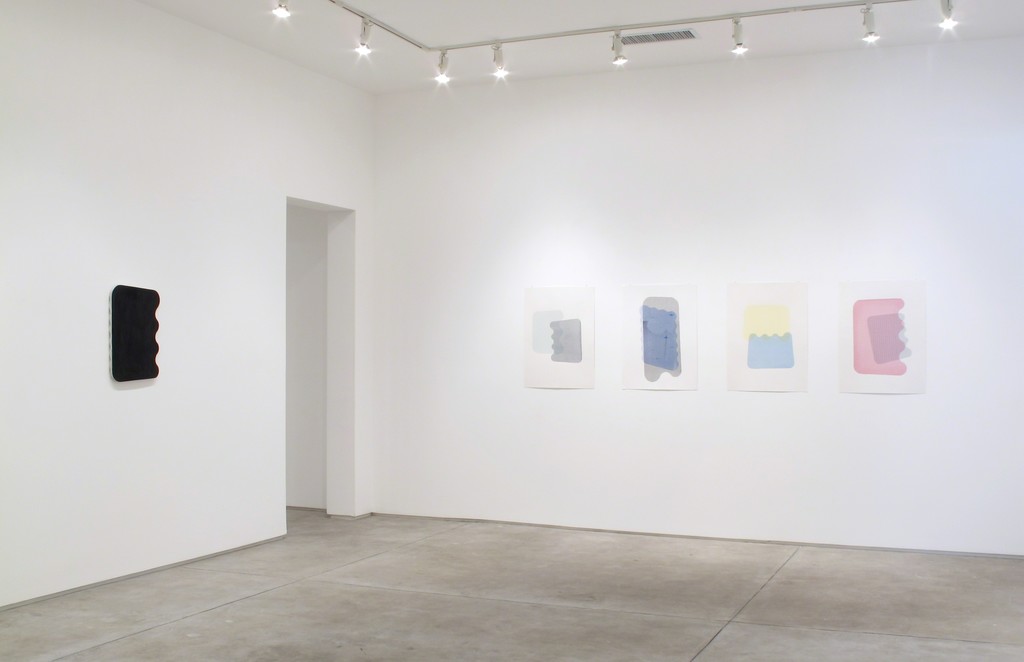 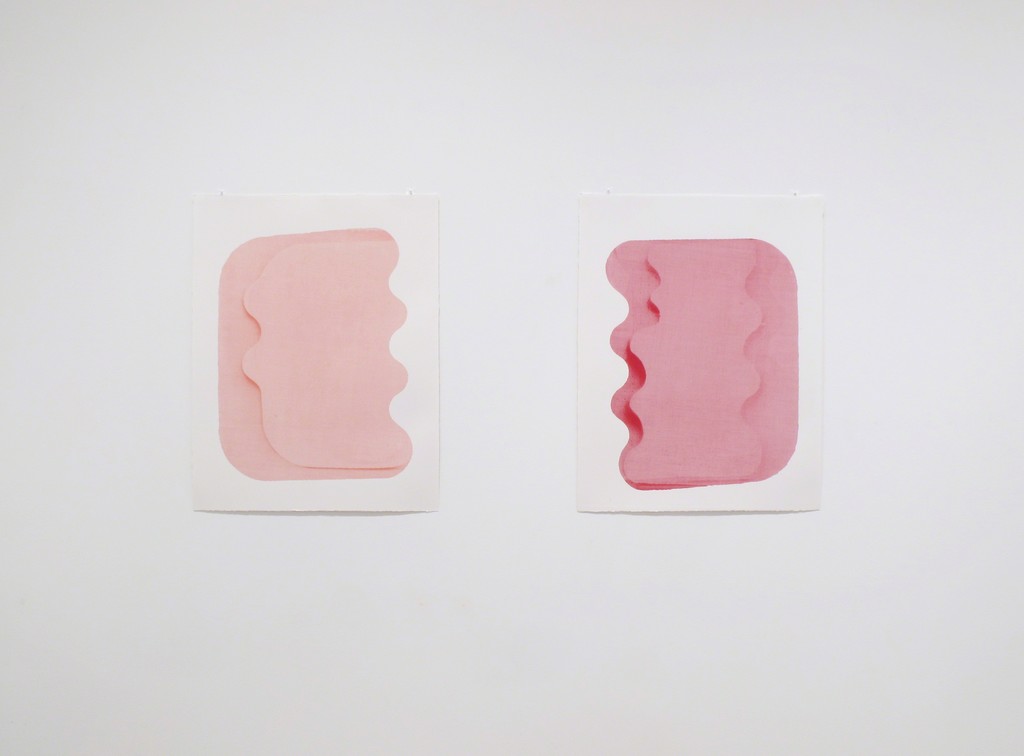 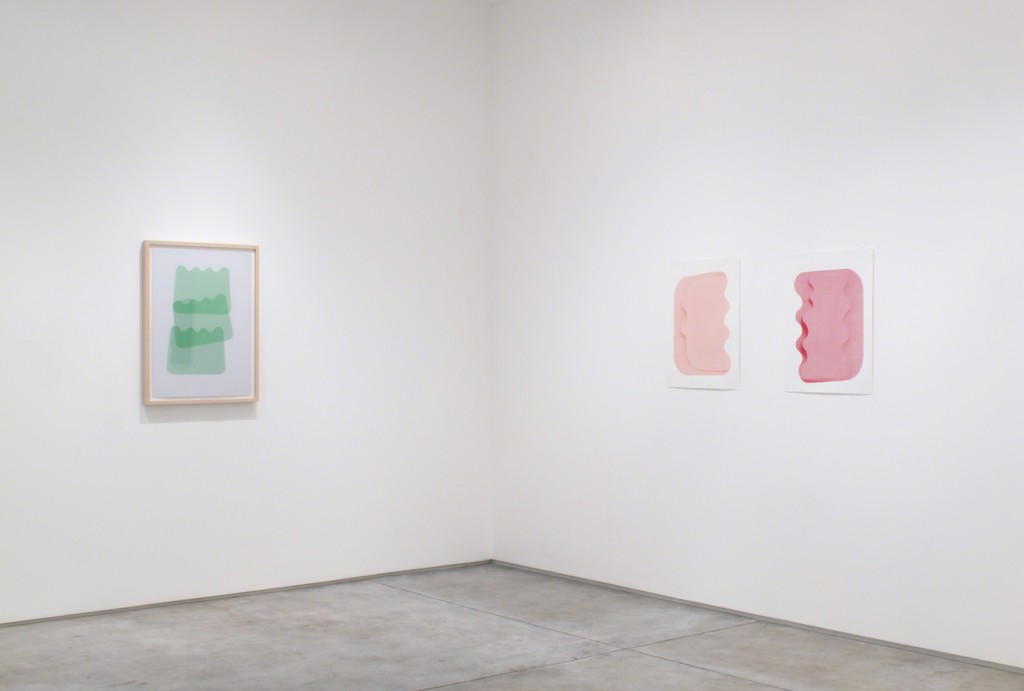 Brad Tucker's sixth solo show with the gallery continues his pursuit of happy
accidents with a group of one-off silkscreens. He keeps the number of component parts uncharacteristically small in this series: each print is an arrangement of two, occasionally three, overlapping shapes, and each shape has at least one scalloped edge. But within those tight constraints, Tucker is playing a subtle game with countless permutations. He cuts his shapes from window screen, and then exposes them onto silkscreen. The resulting color fields have a texture that, when superimposed, create delicate moirés: plaid-like patterns produced from the two grids being slightly offset. As an additional complication, Tucker selectively floods his screens with ink, so that certain areas will tend to smear and print darker. It’s a display of technical finesse whose end result is immediately accessible; the bright threads of
color and soft shadows feel as much like serendipitous discoveries as triumphs of expertise.
Tucker, a veteran skateboarder, chose the title "Wobbles" in part as a reference to “speed wobbles”: the failure of nerve that strikes a fast-moving rider. It’s a self-effacing title perhaps, but also an allusion to Tucker’s seat-of-the-pants approach to art generally. Part of the joy in making something is testing your own limits, and work with no possibility of spectacularly crashing probably isn’t risking enough. The chancy effects inherent in Tucker’s process
make each unique print a deft navigation of pitfalls that needs equal parts confidence, skill and luck.
The second reference in the title is to astronomy. At a distance, two stars orbiting each other can appear as a single star that wobbles (an actual astronomical term). The association emphasizes a more formal aspect of Tucker’s undertaking, in which a particular arrangement of elements gives an amplified energy to the whole. The undulating edges of Tucker’s shapes never line up precisely, and that staggered rhythm corresponds to the moiré patterns of overlaid mesh. As lighthearted and seemingly uncomplicated as these compositions may be, they are also humming at finely calibrated frequencies, slowing down and speeding up as one wave crosses another. Of course a feeling for relative speed, for bodies in motion, would not be unfamiliar to a skateboarder, and what unites the athletic and the ethereal in these prints, ultimately, is the suggestion that access to the sublime requires a certain loss of control.