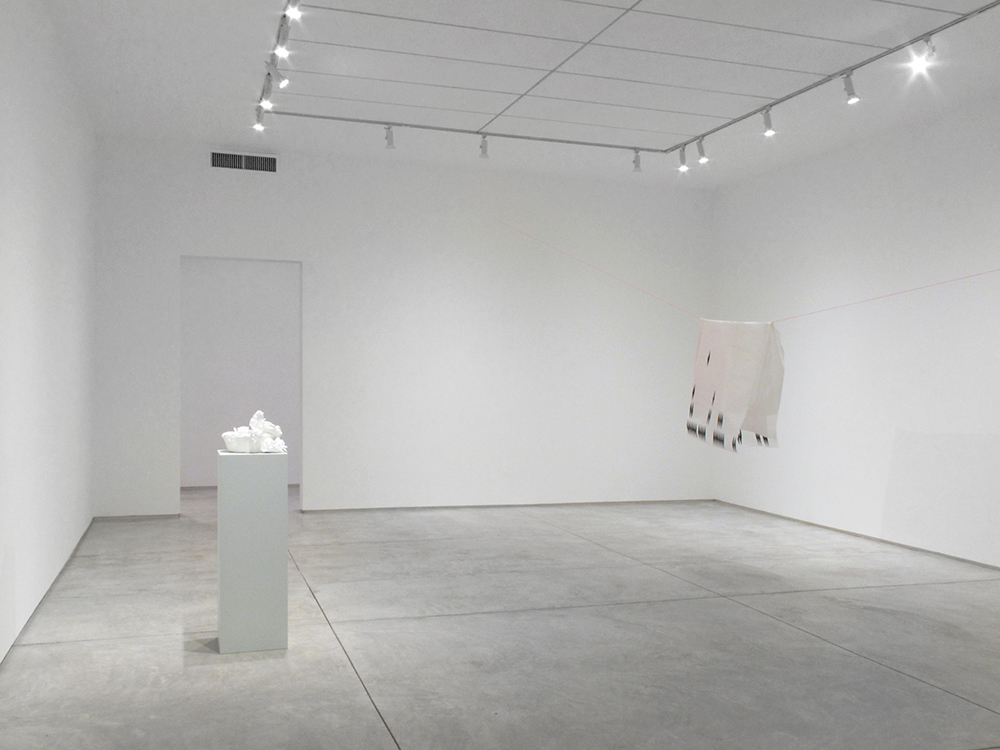 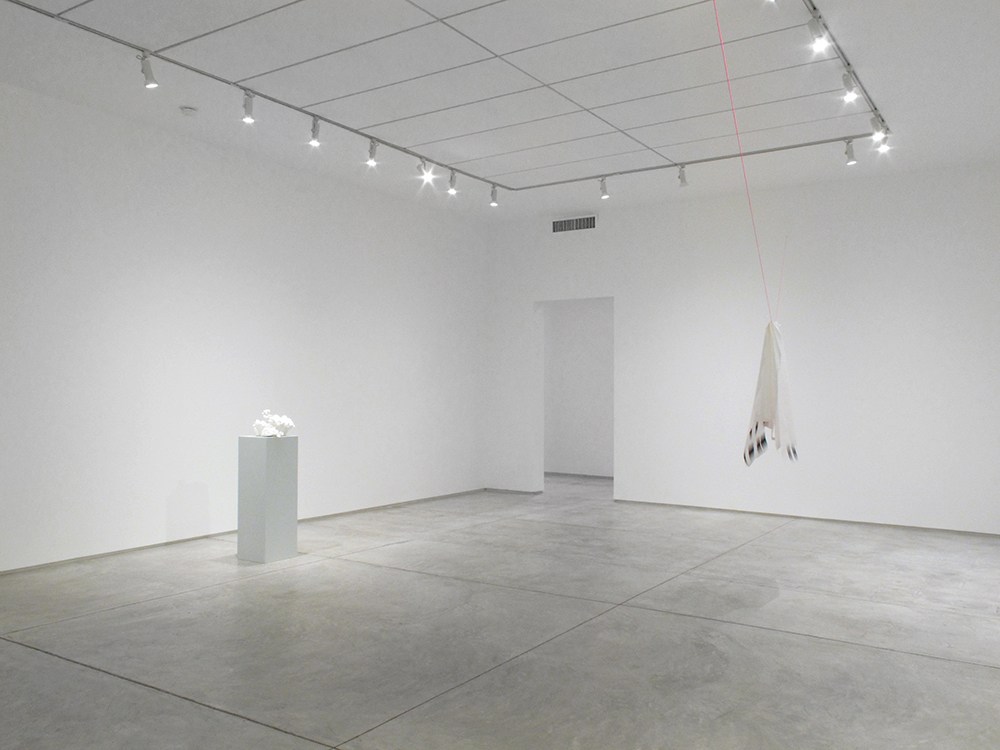 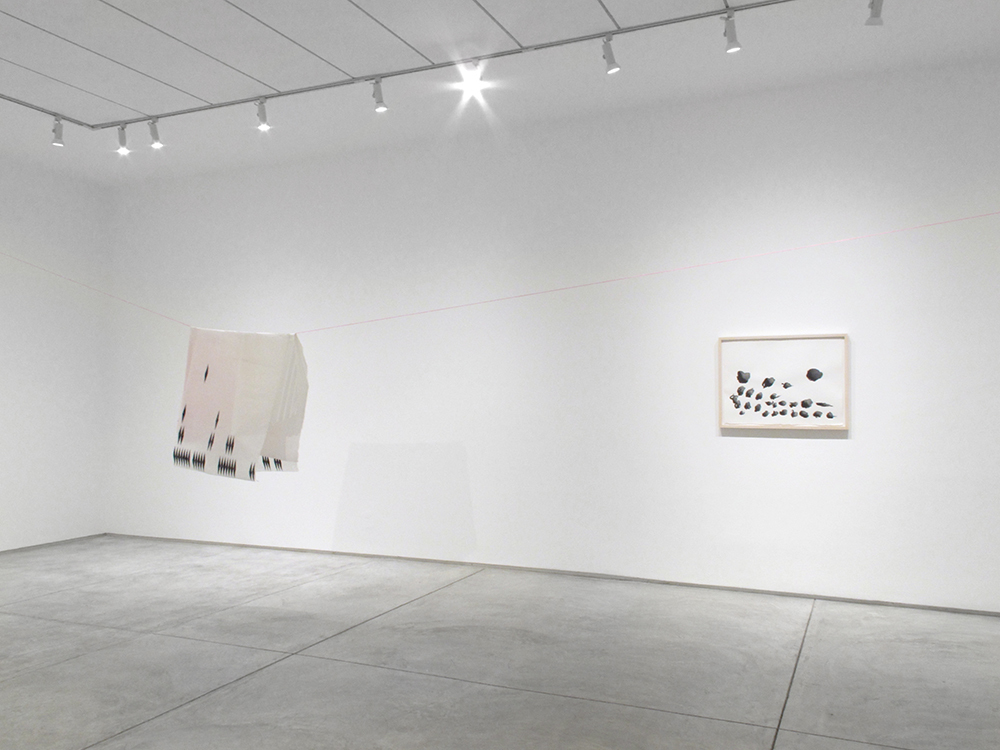 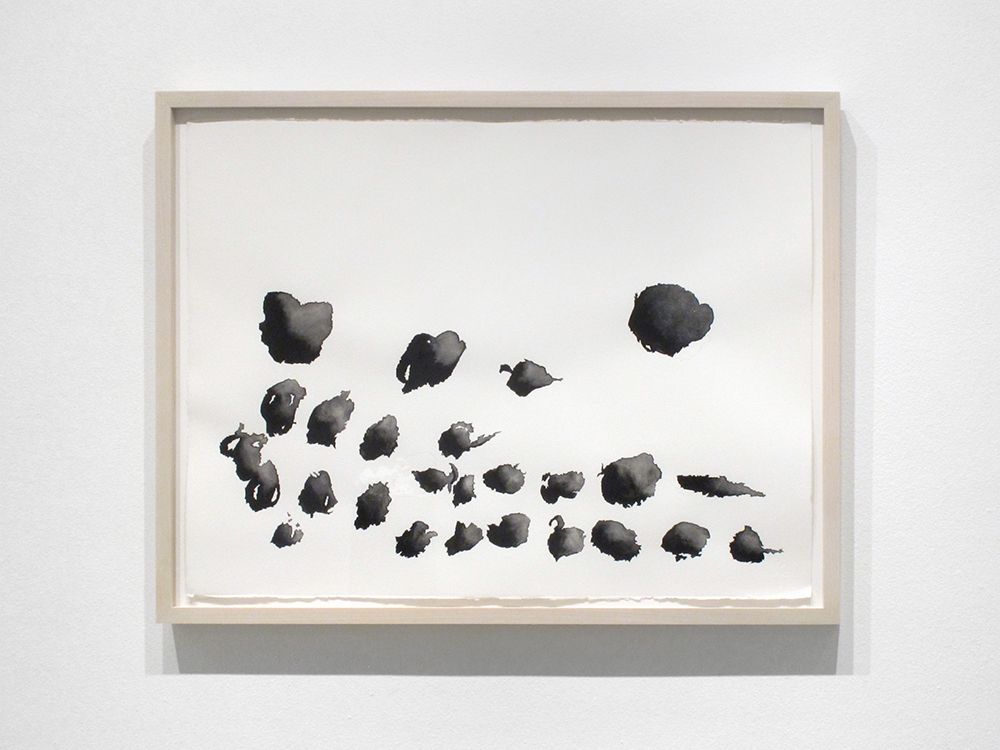 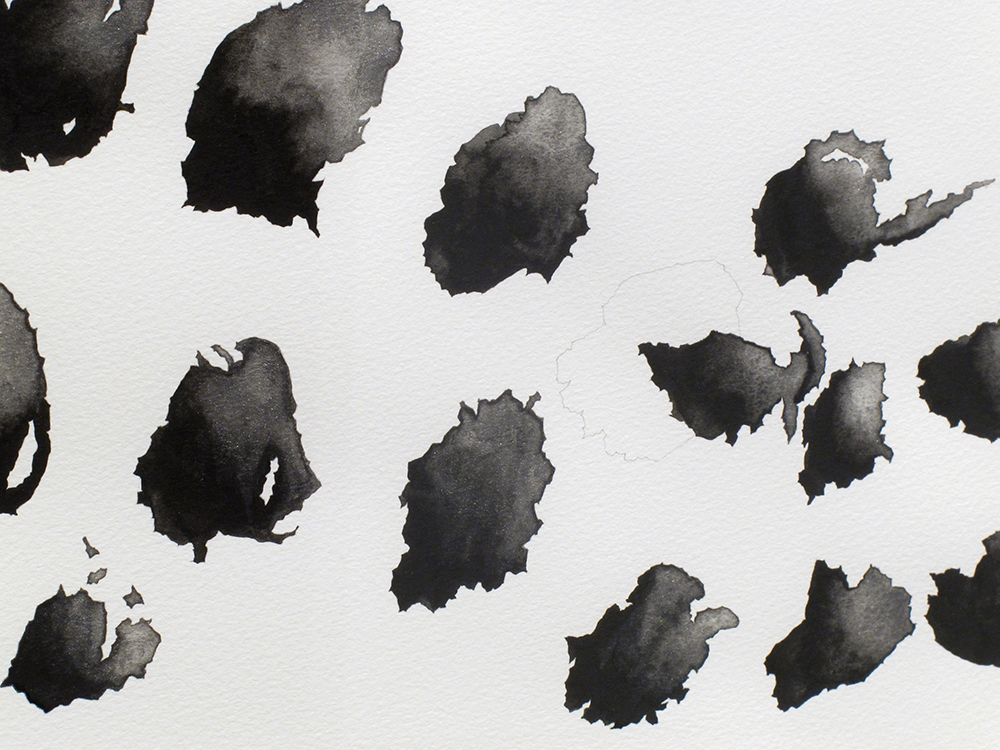 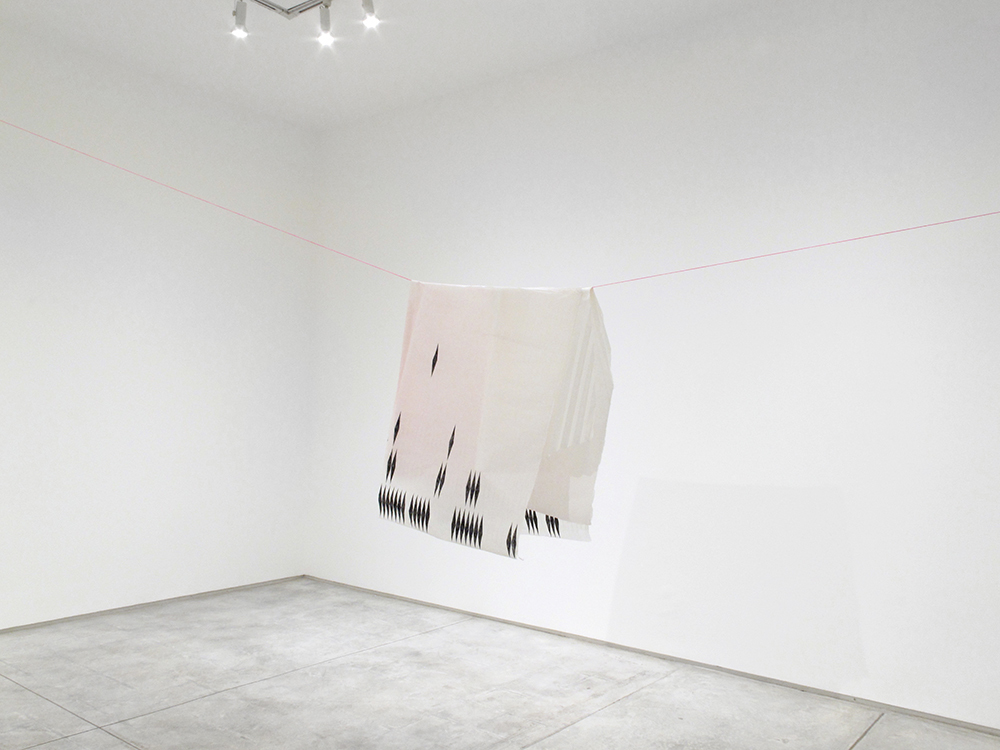 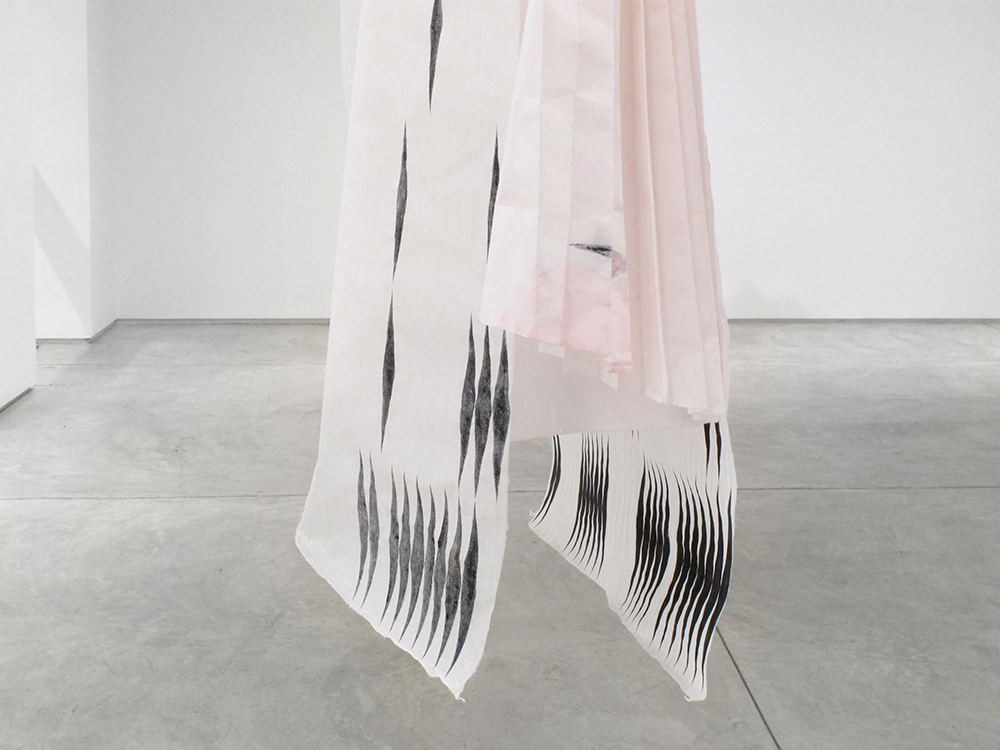 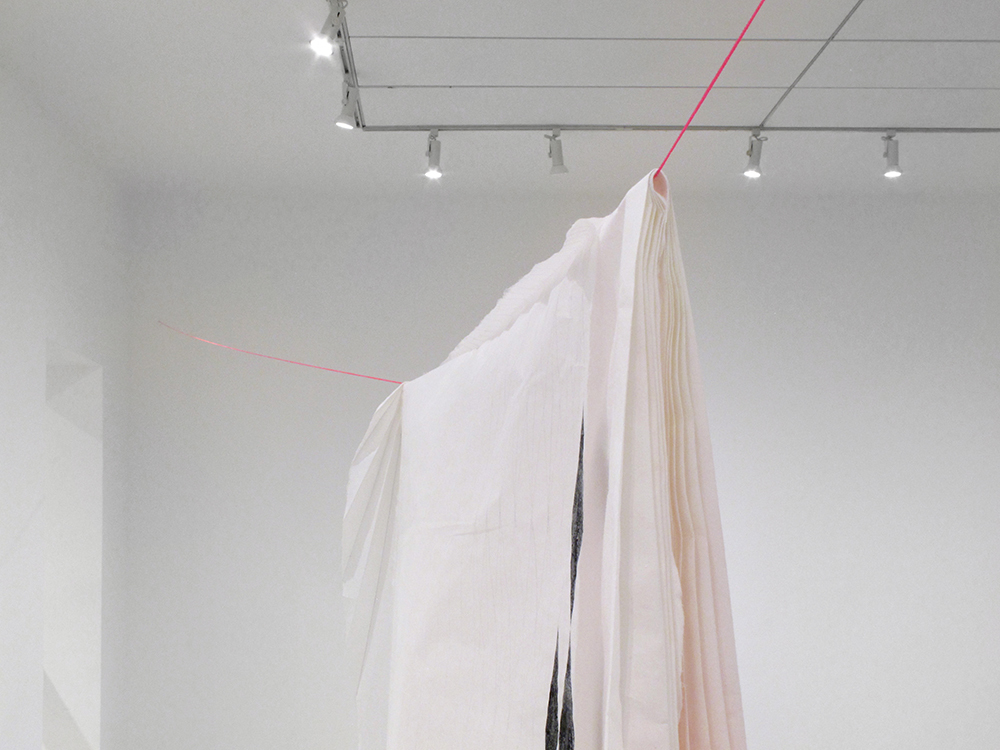 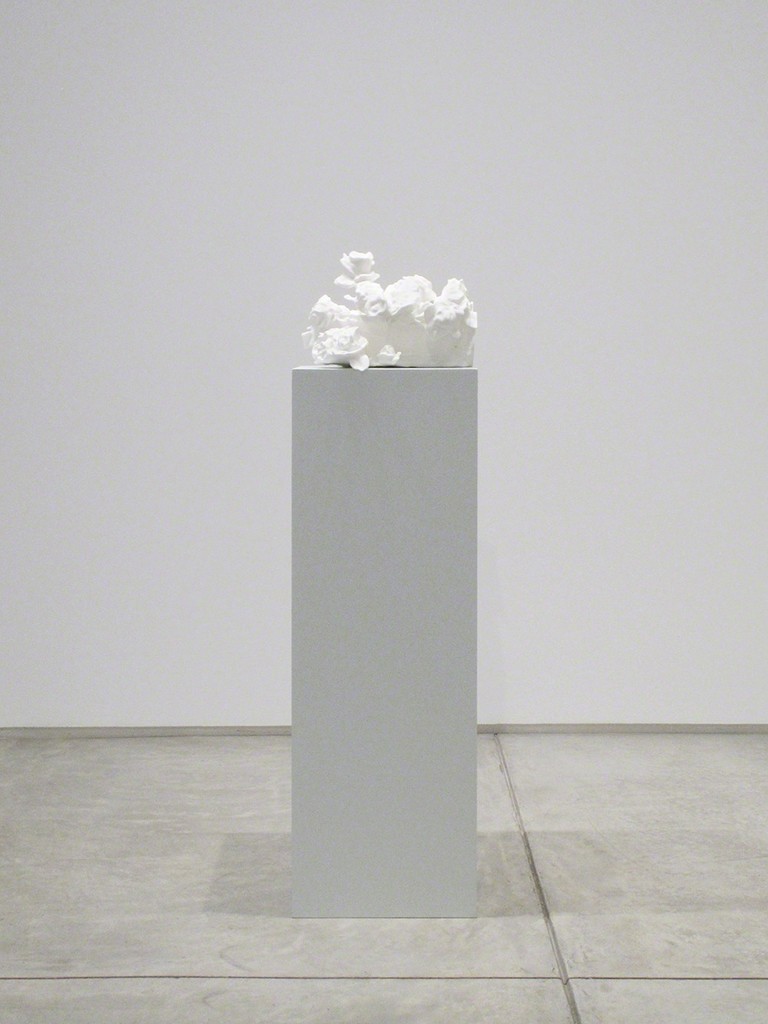 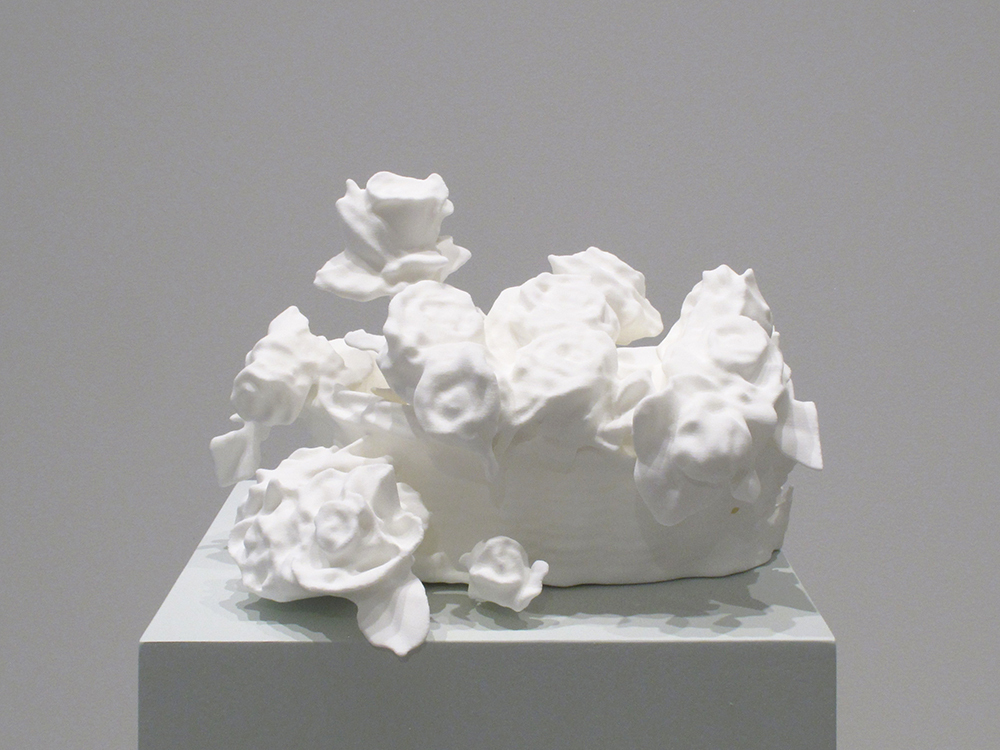 Inman Gallery is pleased to present a solo exhibition of new work by Katrina Moorhead, titled seapinksea. Opening with an artist’s reception from 6–8pm on Friday, March 8, the exhibition will be on view through April 27, 2018.

Sea pink is a hardy, low-slung perennial native to the UK coastline. Persevering through brackish wind and meager soil, the otherwise unassuming plant produces bright pink blossoms in late spring. It was a fixture of Katrina Moorhead’s early life, and serves as a point of departure for her current exhibition, seapinksea.

Only one sea pink appears in the exhibition: Moorhead’s watercolor of the plant reproduced as a digital print and surfaced with black tendrils of sea salt. Adrift in a black field, the flower nevertheless imposes itself on the surrounding expanse, its influence outstripping its size.

The sea pink is physically absent elsewhere in the show, but presides as an atmosphere; its buoyant tenacity animates the work in the north and south galleries. Subjected to a sustained and exacting process of scrutiny, transformation, dissolution, and eventual reinvention, the images and objects populating the exhibition have endured by adapting. long playing record’s fused cluster of molten flowers traces its origin back to a freshly cut bouquet in nineteenth-century French painter Henri Fantin-Latour’s studio. That original arrangement lives on as a painting in London’s National Gallery and then again as album art for New Order’s Power, Corruption and Lies, which is how it first came to Moorhead’s attention. Moorhead meticulously recreated the bouquet from the image, then scanned and 3D-printed a new version, taking care to crop the leaves and basket exactly as they’re cropped on the album cover. The resulting sculpture, a vestige of the 1800s by way of the 1980s, is a spectral distortion of nature’s original, sustained but corrupted by its circuitous cultural transmission.

As with Moorhead’s image of the sea pink and indeed the sea pink itself, her sculptures claim more space than their size would first suggest. An undulating paper construction suspended on a wire unfolds diagonally across the north gallery, asserting itself with delicate resolve. An oak shelf rings the south gallery, changing height and depth as it goes, heedlessly cutting across doorways and encompassing the room in its orbit. Though never deeper than six inches, the shelf commands the room: it’s a rolling, changeable horizon, a foundation, boundary and through-line for the work it connects. At one point it appears to sit on stacked bricks of peat. Further along it holds up an embankment of peat powder. Elsewhere, tambourine jingles are embedded into the shelf itself, suggesting an instrument that sounds only if the whole room were to shake. Though stemming from innocuous sources – images and notions of landscapes, the broken percussive instrument, furniture, all the debris and devices of living – the shelf has a haunting specificity garnered from protracted translation and revision.

Although the work frequently harks back to nature – mediated, hybrid and disjointed nature, but nature nevertheless – its affinity with the sea pink is primarily one of temperament. Like the sea pink’s incongruous bursts of color jutting out over the Atlantic, Moorhead’s sculptures sound notes of weathered but still lively defiance, even as they cling to the end of the earth.