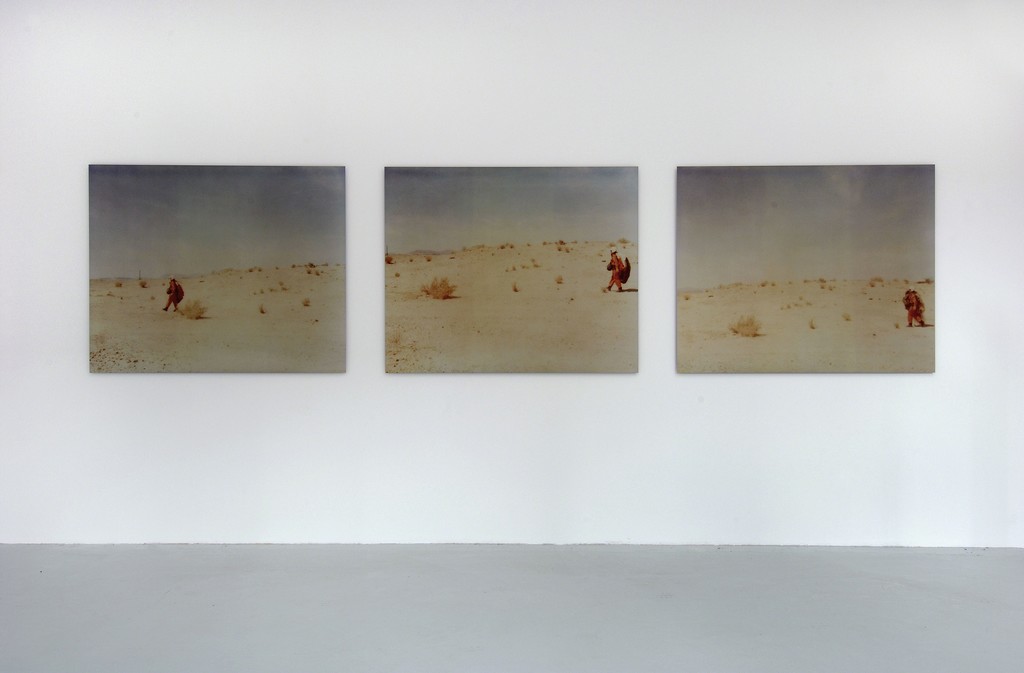 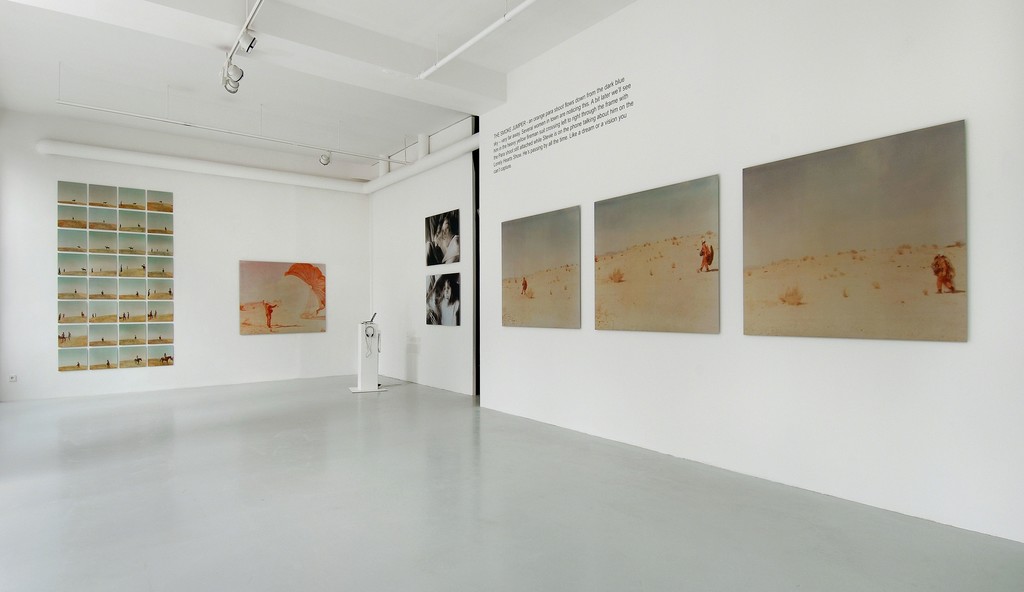 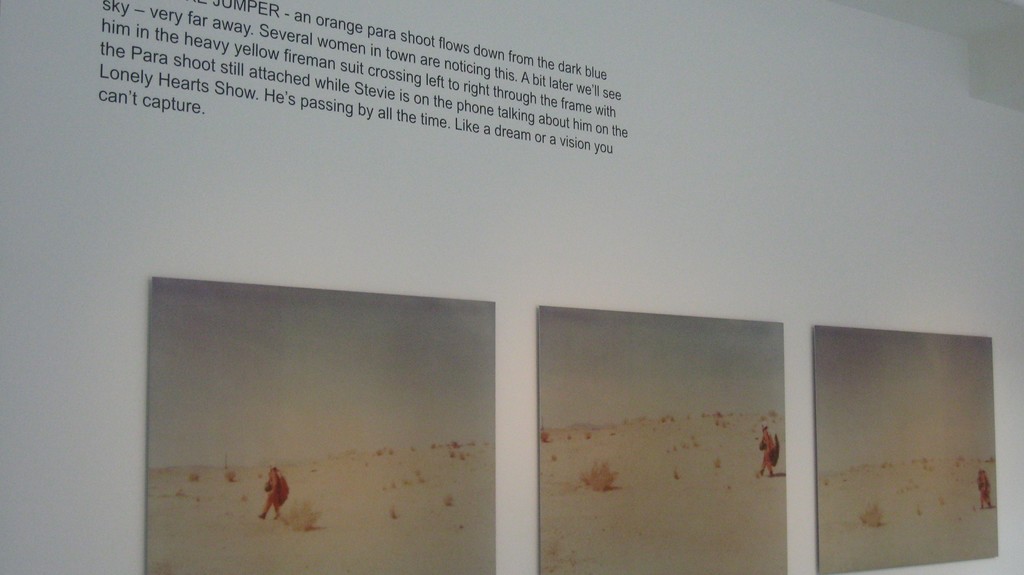 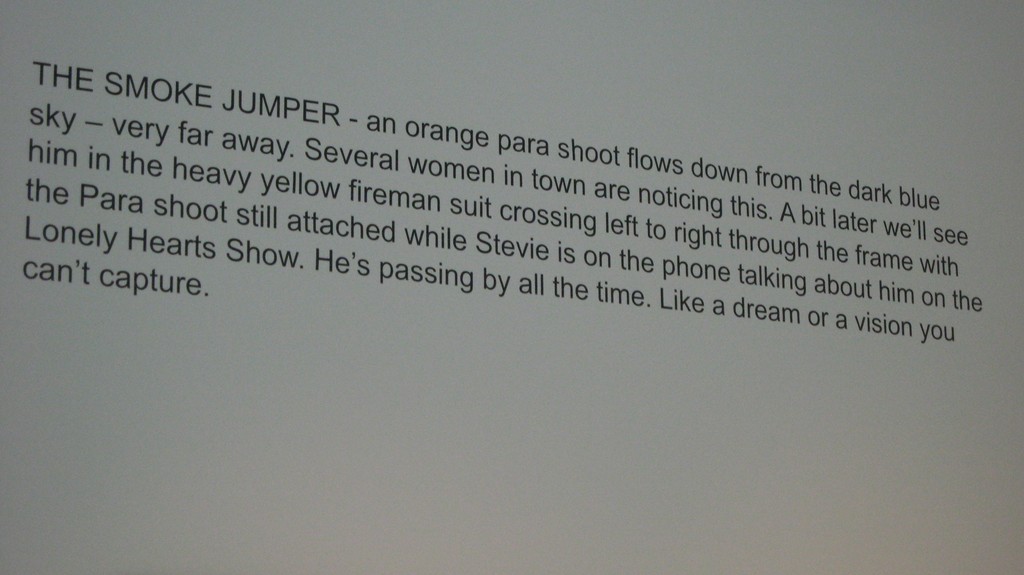 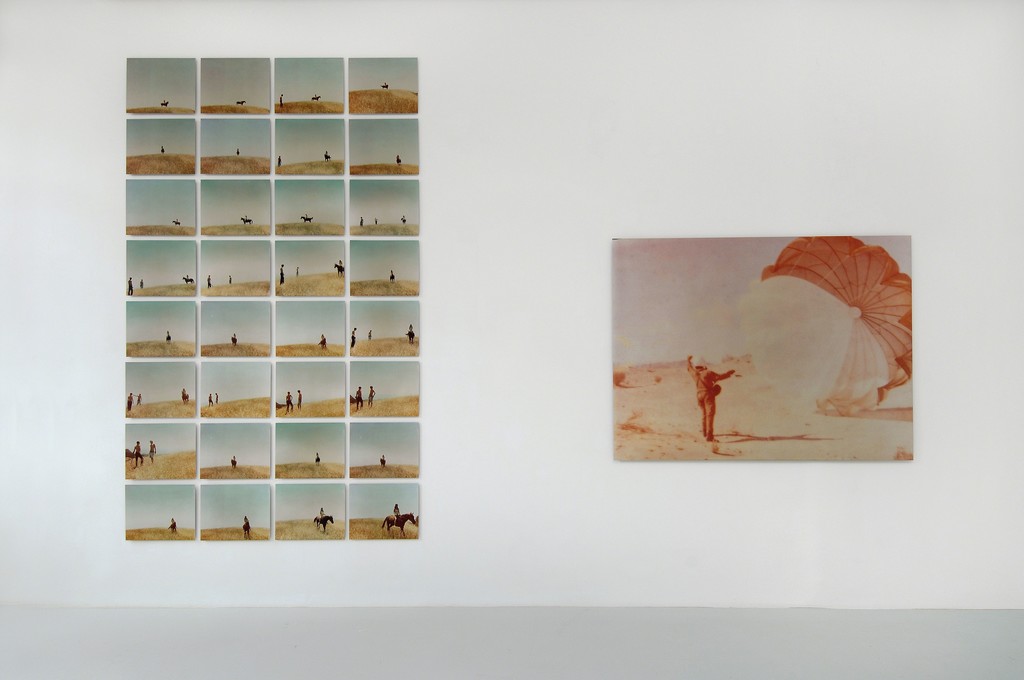 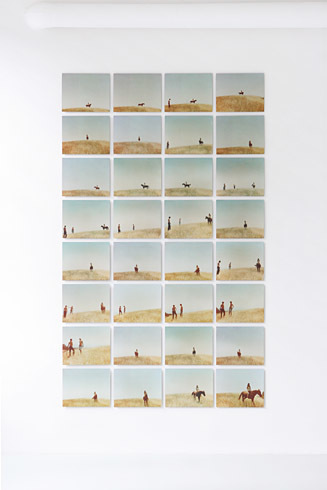 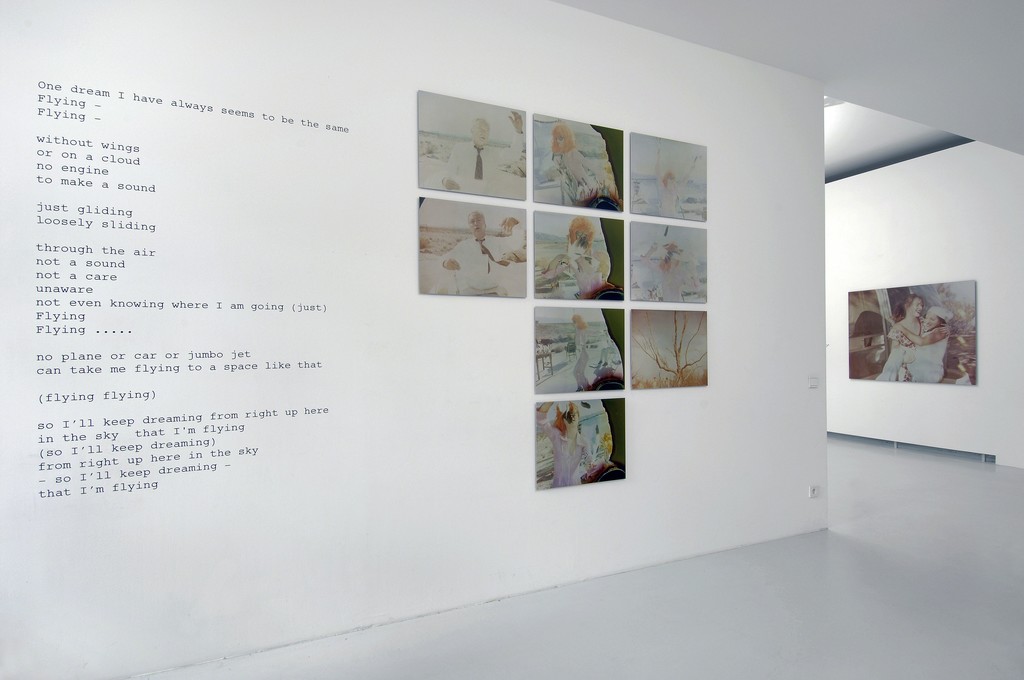 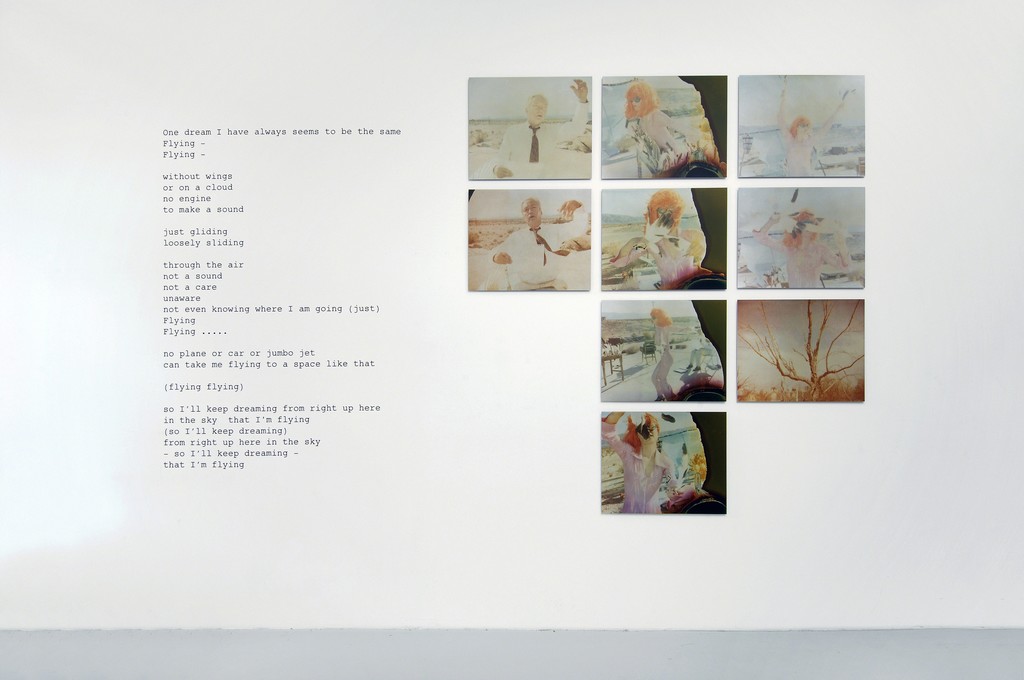 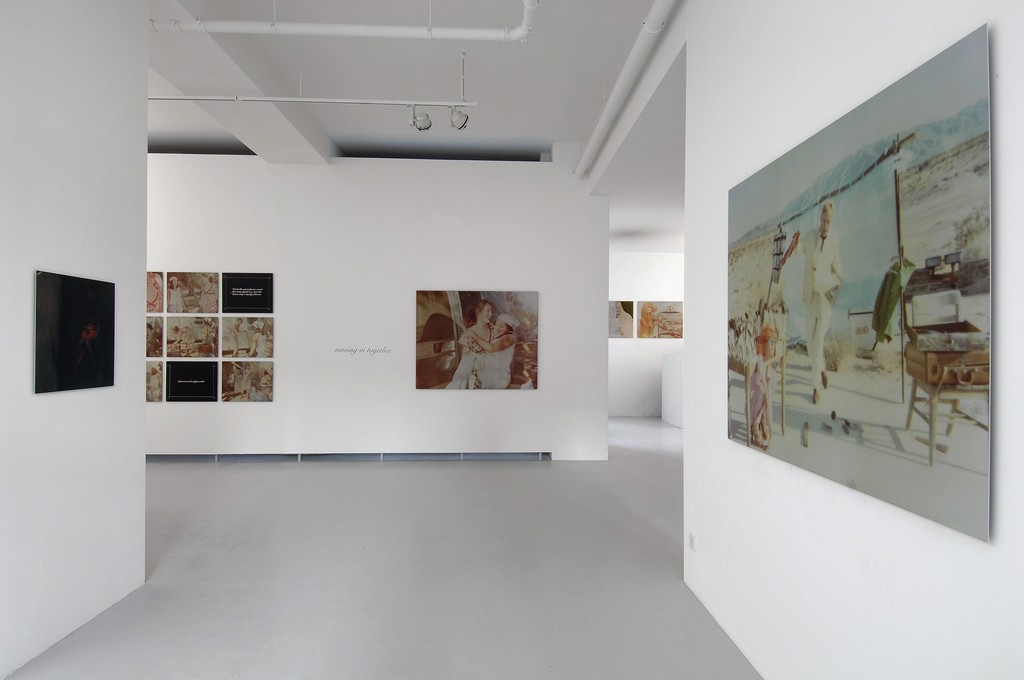 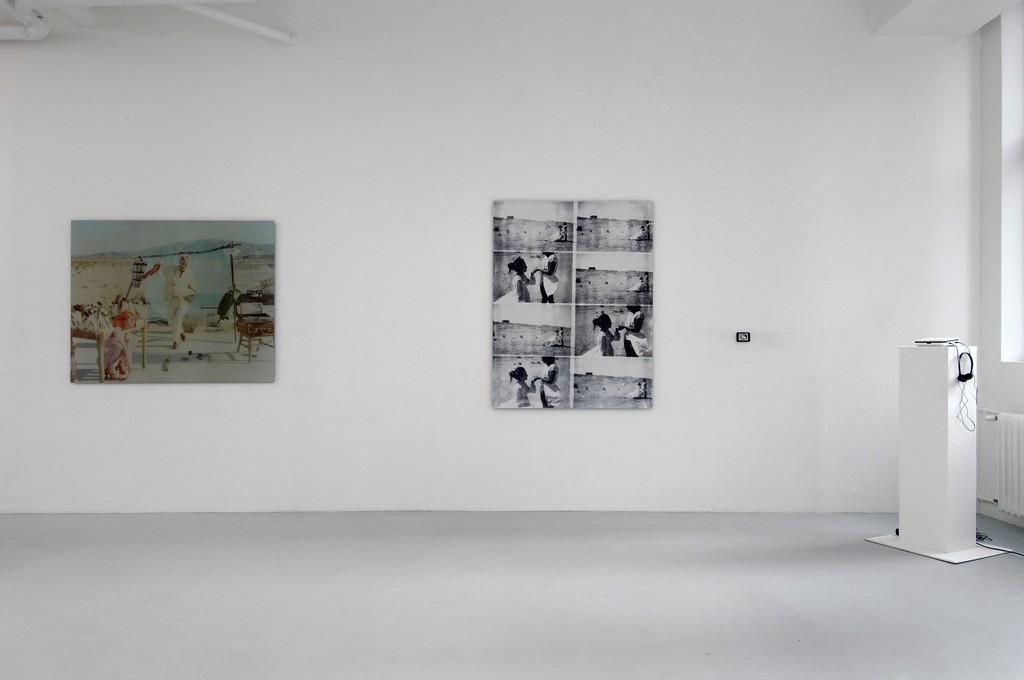 Quicksand of the Californian Desert - An essay by Adi Hoesle

What is striking is the incredible coloration of the photographs, a phenomenon, which does not seem to conform to the high-tech and high-gloss perfection of contemporary photography. There are muted and pale colors, diffuse light, perhaps overexposed, blurred in the wide shot, sharp in detail. Close-ups alternate with landscapes; brightly colored portraits from pop culture alongside unknown persons in half relief stand next to self-portraits of the artist, nudes alongside cowboys.
Horses are swallowed up in the vast expanses of America, and as if this were not enough to create uncertainty in the viewer, a man places a pistol against the head of the artist herself. Everything seems to be in flux, not only the fixed motifs on the photographs, but also the sheer number of the exhibited photographs, hung as series; various sizes are only partially perceived as floods of images. The eyes begin to accommodate, attempt to focus, strive to achieve a fixed view, and thereby unleash nothing other than dizziness. Is the artist here attempting to seduce the viewer? Does shem induce psychedelic borderline experiences? Or is this a dream world, a sort of self-portrait of the artist into which the viewer is enticed and kidnapped? The images begin to move, and the border between picture and film disappears. It is the instant of specialness. Stefanie Schneider plays with the media of film and image; she performs a dance, rock ‘n’ roll in the desert! She causes the dream images to come alive and thereby conducts the supposed security of the real onto the quicksand of the Californian desert. The naked red-haired woman, the pink Cadillac or the vastness of the desert
are used here as the American dream, the longing for happiness and unlimited possibilities of self-realization. Where would one be nearer to this than in permanently warm California, where nearer than in the dream factory of Hollywood? The film: the way of life as the world of Platonic ideas?
Whoever believes him- or herself thereby to have “seen through” the art of Stefanie Schneider will learn better upon attempting to explain the strange streakiness, blotches of color, and dark forms at the corner of a photograph. How are the scratches, dissolved colors and empty spots in the photograph to be explained in terms of visual design? It is the subtlety of Stefanie Schneider which here radically disrupts the supposed dream world, the omnipotence of human existence. It is the utilized material itself, which puts to question our transience, human existence itself. The Polaroid
films which she uses have already become damaged; they have gone past their expiration date; they are in a state of physical decomposition, caught in their own passing away―just as we ourselves in our earthly existence have only a limited “shelf life.” Our life is limited, Stefanie Schneider wishes to tell us, but it is nonetheless a beautiful dream! In this inspired cooperation, motif and material extend a dynamic arc between being and non-being upon the stage of life. Is it a dream, a film, or “only” reality? This is the special and avant-gardist element in the artistic work of Stefanie Schneider. In numerous exhibitions throughout the world, Stefanie Schneider has earned respect for her artistic work. Her films are a consistent and logical continuation of her manner of treating images, and they possess an even deeper emotional presence and quality. Where could this work better be continued and further developed than in the vast expanses of the Californian desert, as the sensual dream, which we all live?