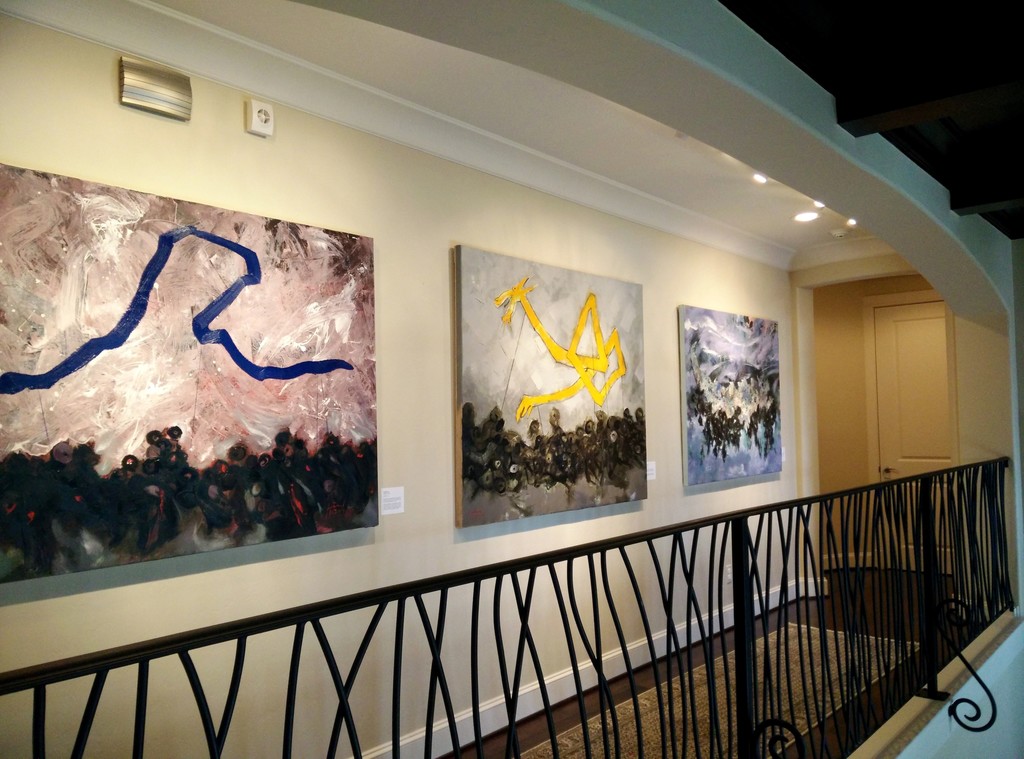 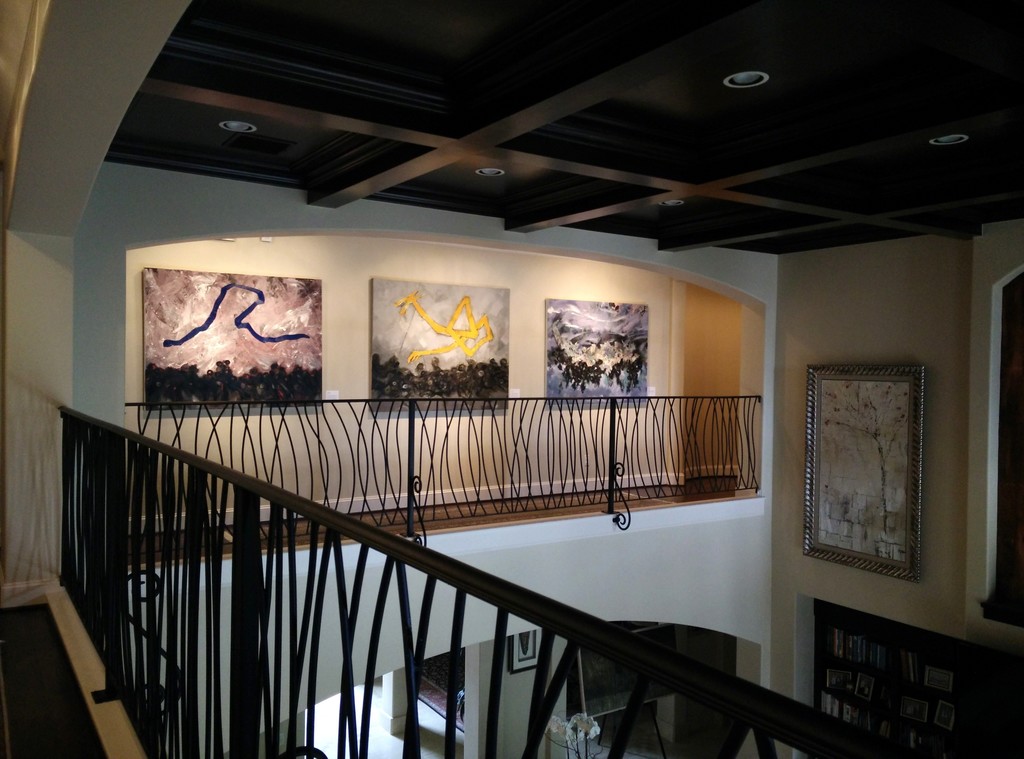 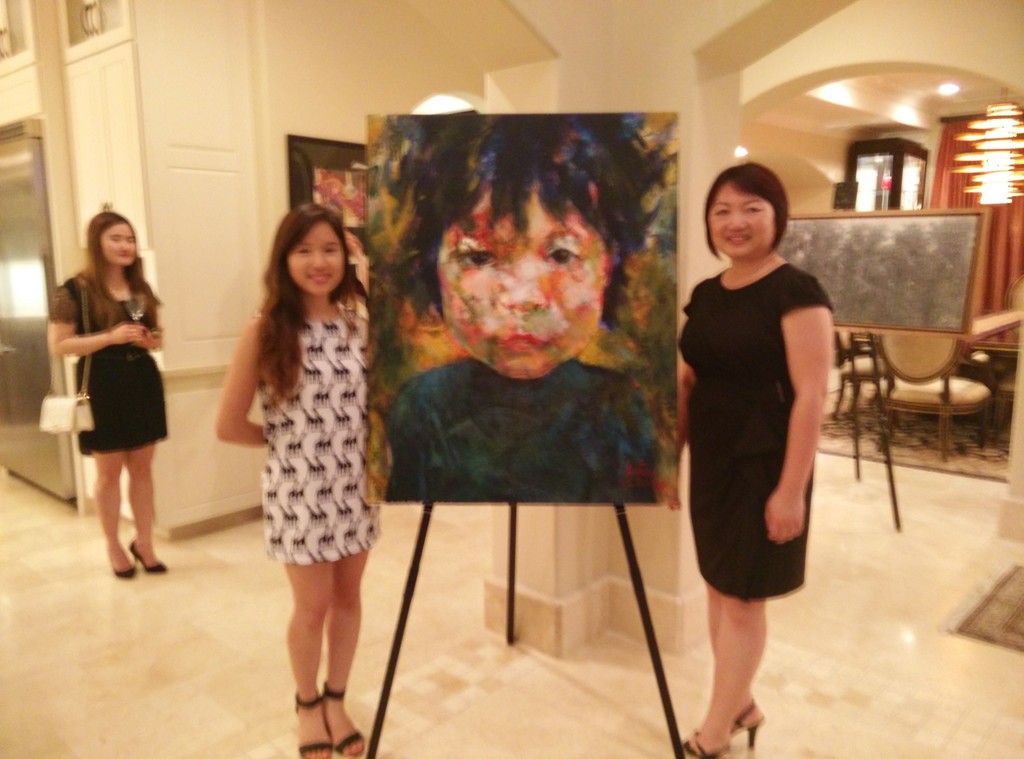 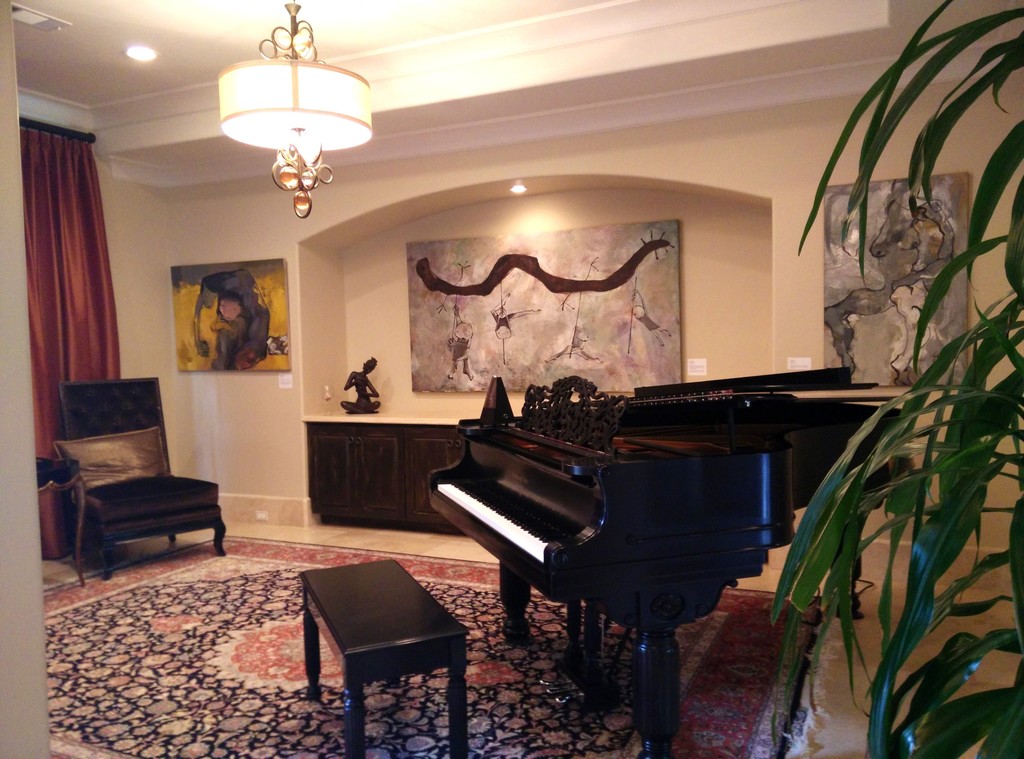 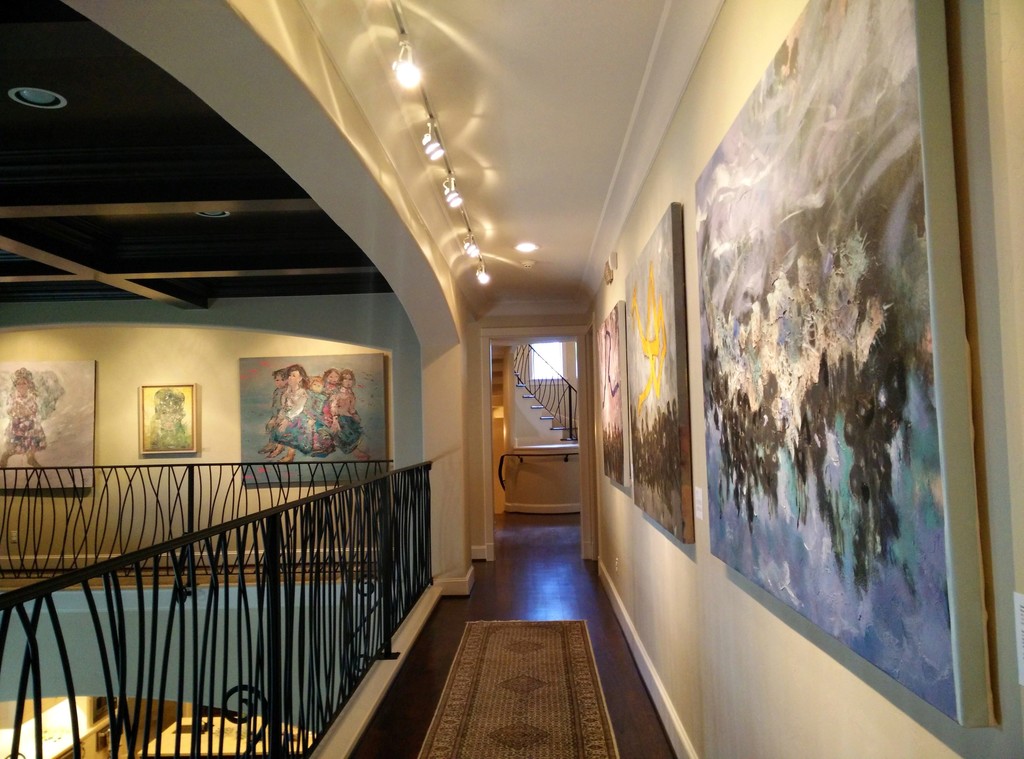 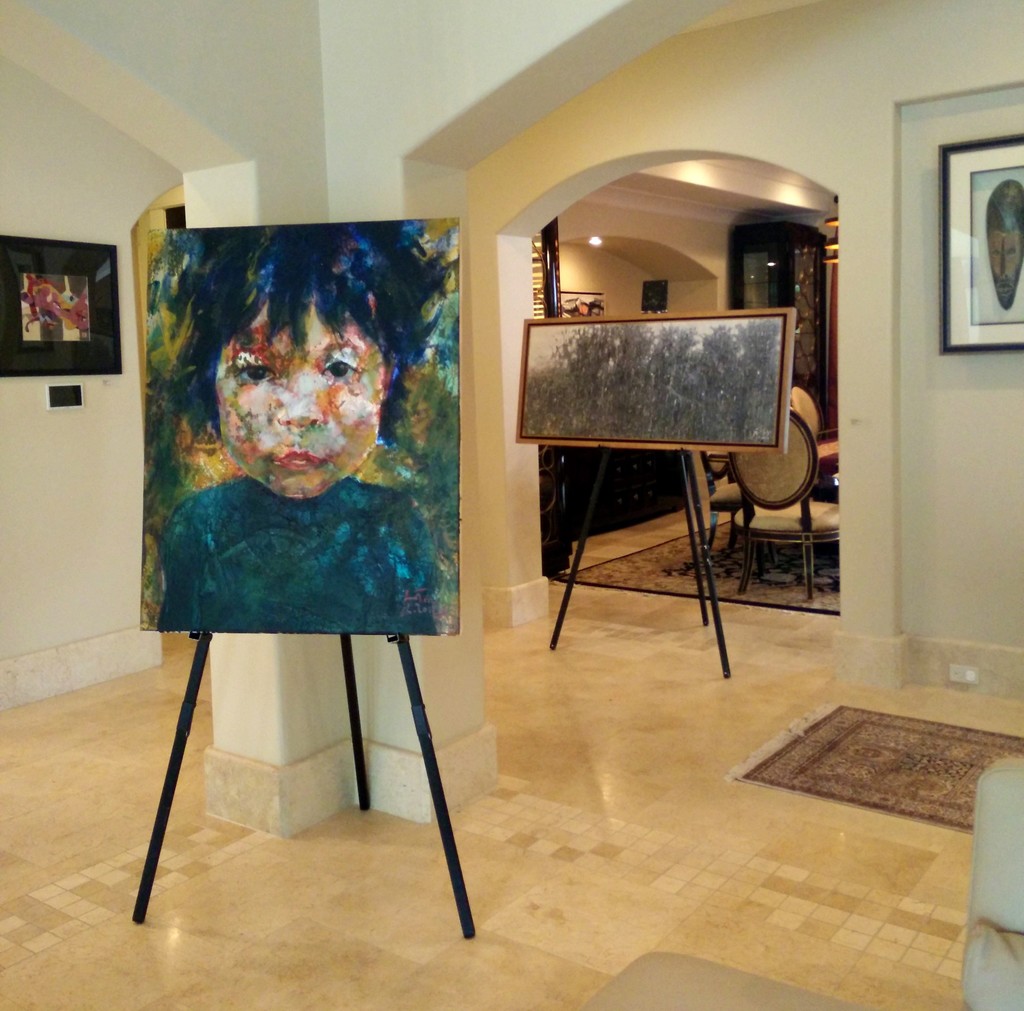 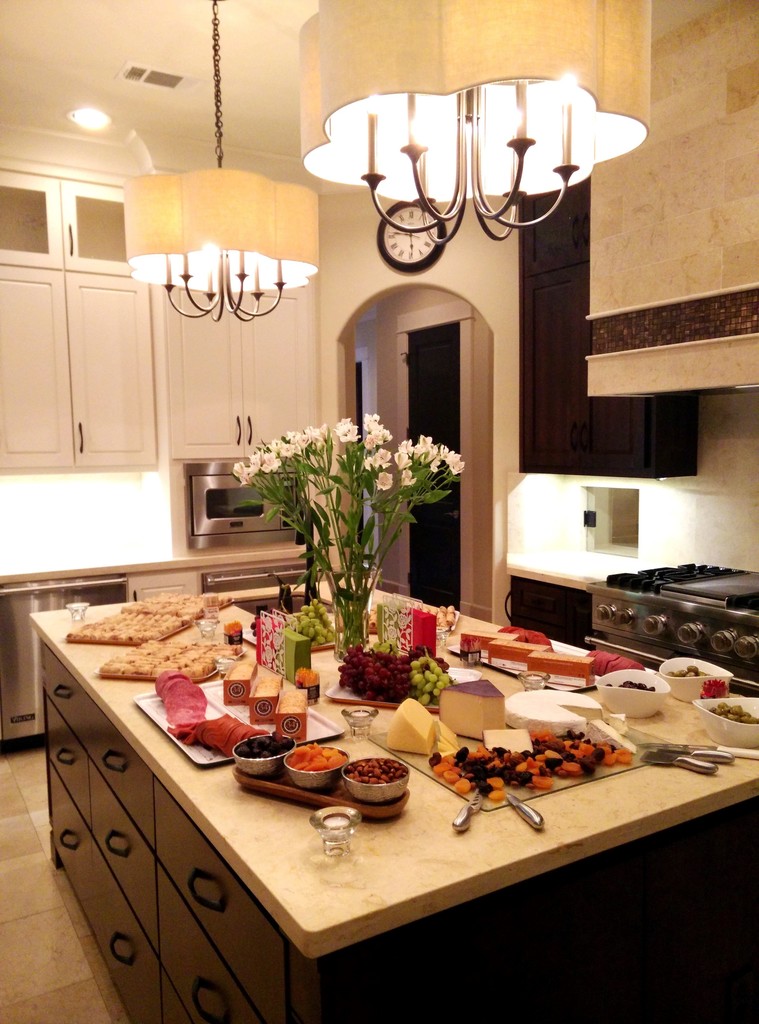 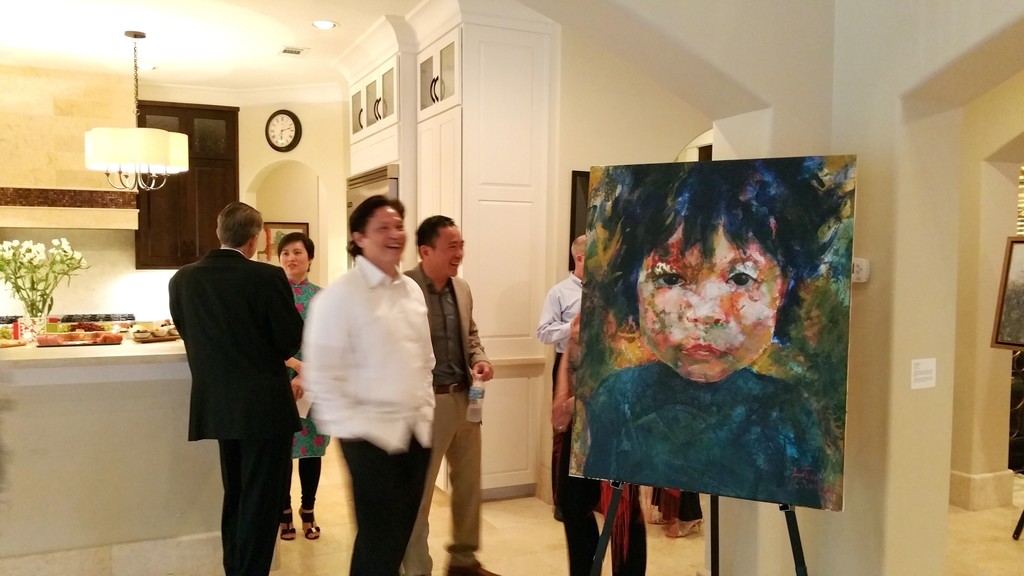 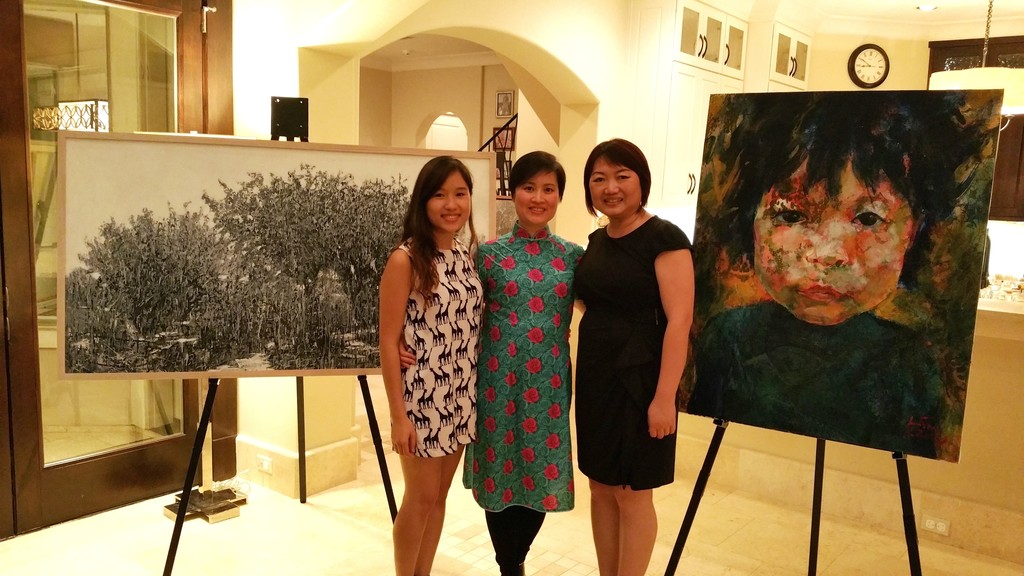 Vietnamese artist Doan Hoang Lam is a painter of the unseen, of the ephemera of processions, of life cycles, of the tantalizing cerebral realms of desire, orchestrated with a precision and sense of weightlessness that draws the viewer in, like walking through an alluring evening fog. An accomplished and well-regarded artist, Lam has been featured in numerous group shows and solo exhibits in Thailand and Vietnam. However, this exhibit “Shades of Time” is the first opportunity for the American public to experience Lam’s artistry.

These often indecipherable yet beautiful works function as painterly allusions to the ceremonial and visual culture of Vietnam, too long oppressed and hidden, particularly unseen in this part of the world and as such are particularly meaningful and rich.
Much of Lam’s work moves beyond description, and lives in the world invented by the artist himself, a type of Objective Abstraction, with a strong emphasis on painterly activity, gesture and calligraphic flickering forms. For example, the cobalt ribbon of Procession 6 (2014) seems at first to be an element of a purely abstract painting. However, the work is part of a series responding to the processional ceremony, a key cultural form of expression in Vietnam. Without depicting the objects naturalistically, the artist still evokes a moving and shimmering image of a moment of activity, in number six, the black masses of figures are alight with red spots of pigments, and they hold the dragon like form aloft with long rods.

A related work Procession 4 (2014) seems as if it has been made underwater, like an Ebru painting, the images emerge and bubble forth, stirred by the painter’s brush. An inverted oceanic scene, it resembles a Rorschach blot, stone etching, the waves and sky becoming one. Black clouds contrast and recall the luminosity of American artist Sam Francis’ bright gestural paintings. In Lam’s work, the evocation of feeling, experience and state of mind are paramount, and this is a concern he shares with early twentieth century Expressionist artists, particular in the figural drawings, where a thick black line gives corporeality, a thin ragged line shows movement, and a certain sexual rawness. In fact, a visceral sensibility in the nude series is present, reminding one of the shocking raw drawings of Viennese artists Oskar Kokoschka and Egon Schiele. In this series, Lam’s impressionistic background emphasizes texture, scratched, etched, visible paint marks, scraping away of pigment contrasting with areas of heavy impasto.

Gray Nude (2008) combines this Expressionist sensibility with classical figurative sketching, his heroically proportioned model framed by roundels of white. In works like this, we see the painter’s training in both the fine arts and theater has influenced his style, particularly the choreography of each composition and the prominence on gesture. Some of the processional works such as Procession No. 2 (2014) are a somber brown and grey, reminding one of the end of season or life cycle, the visible faces wearing worn or terrified looks, and works such Lam’s bright yellow study Mother and Child (2014) remind one of the late Ecuadorian artist Eduardo Kingman who uses similar artistic techniques of building and taking away paint, of depicting cultural traditions, and solemn topics such as universal sorrows and exaltations such as motherhood, children, death, illness and loss.

Such comparisons are not made to elevate the position of the artist, but rather are an attempt to frame the meanings and forms of Lam’s production. For his part, Lam’s work possess a spirituality, abstract and figural works are characterized by a sense of painterly veiling, and layers of translucent paint create tapestries of foggy realms, a space of dreams and weightlessness. While many might say that abstract work is simplistic, in fact the construction of composition, combination of color and texture is highly elusive and often the more amateur results are muddied. However, in Lam’s work we feel awash with elements: gray mist, cool lakes and oceanic waves. Layers allow a translucent sensibility as does a masterful scraping away of pigment to depict depth and movement.

Evading decipherment or overt symbolism, Lam poetically expresses these thematics in work that reminds one of Art informel or Tachism, the lush application of pigment rules the waves of the oceanic surfaces of these adroit pictures. Think of the German abstractionists’ techniques such as Gerhard Richter’s scraped surface or the watery tentacles of Carl Bucheister’s chromatic works and the British artist Rodrigo Moynihan’s vagaries and terrains. This new body of work is eerily immersive; one feels as if you have fallen into a timeless space, echoes, and rainy air all about.