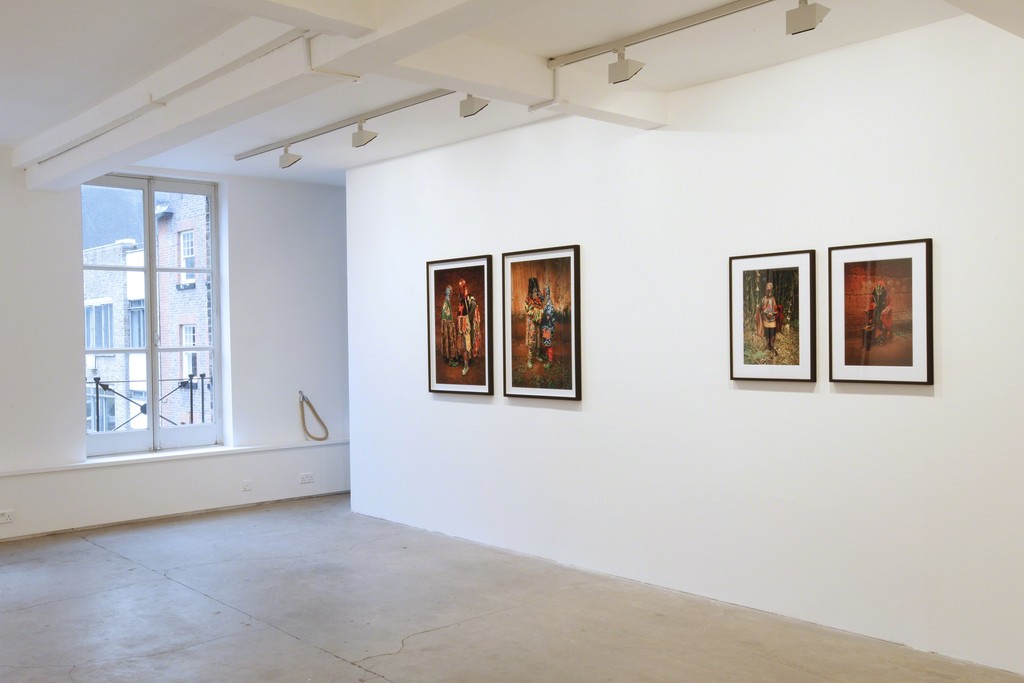 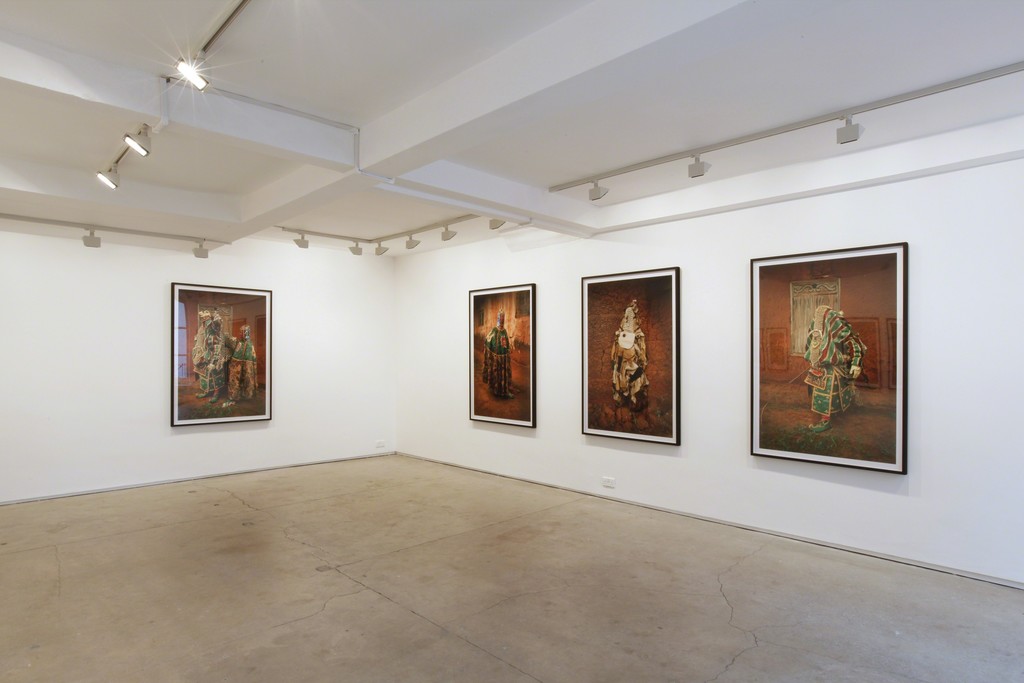 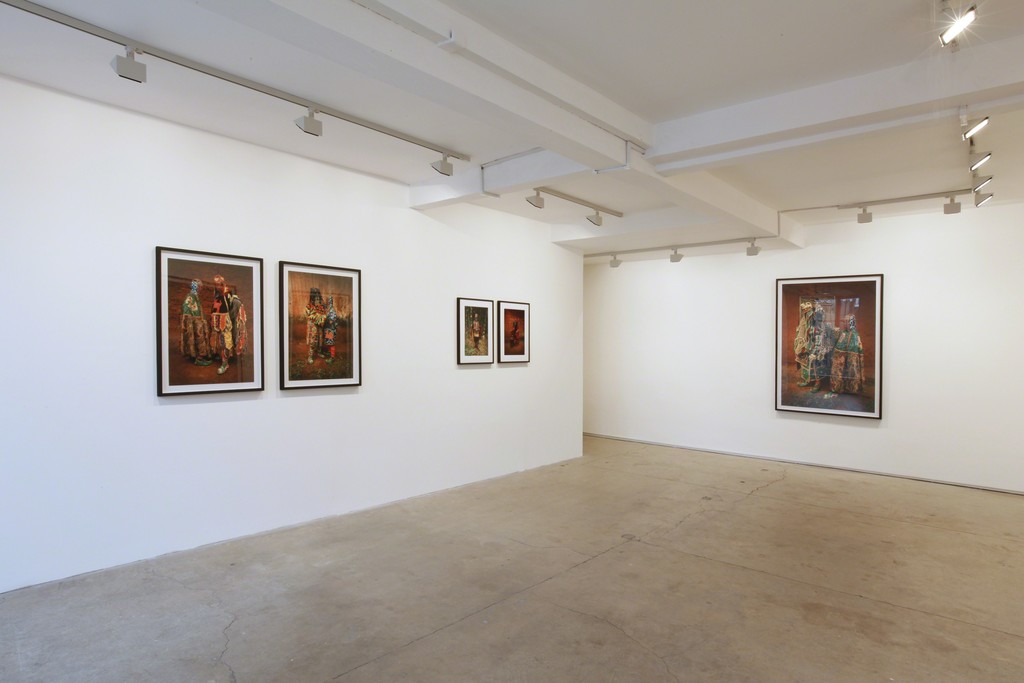 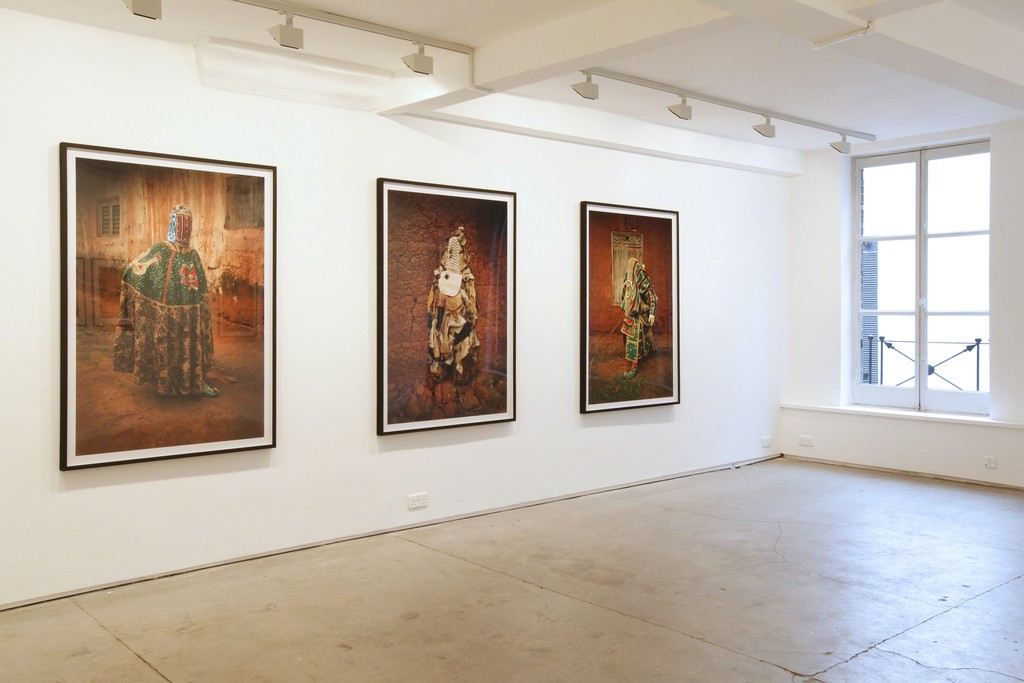 Jack Bell Gallery is pleased to present a new series of photographs by Leonce Raphael Agbodjelou, in his second solo exhibition with the gallery.

Agbodjelou (b. 1965) is one of the pre-eminent photographers of the Republic of Benin, based in the capital Porto Novo. Trained by his father, the world-renowned photographer Joseph Moise Agbodjelou (1912-2000), he has since developed his own individual style in contemporary and innovative ways. Shooting with medium format in an outdoor studio, this recent project has focused on the Egungun masqueraders.

Egungun are both named and unnamed ancestral forbears of Yoruba-speaking lineages, found in the Republic of Benin and in the Yoruba kingdoms of south-western Nigeria. Beginning with Ife in the 11th to 14th centuries a.d., the masqueraders appear at funerals to mark and guide the passage of the deceased to the spirit world. The Egungun perform at annual festivals held in Yoruba speaking communities at the beginning of the rainy season to cleanse the town, but also at any time to avert major misfortune or affliction that threatens the local community. They occupy a range of roles that vary from recent deceased and historical forbears, to acting as community executioners of criminals and witches. Less important and junior performers, such as onidan (miracle workers) olokiti (acrobats) and alabala (wearers of cloth) can also entertain the onlookers with magical feats and the sumptuousness of visual display.

Porto Novo, in what is now the Republic of Benin, has many Yoruba-speakers but historically they were subjugated to a Fon descended community and king. Egungun was permitted in public performance as a marker of an acknowledged Yoruba descent and identity, albeit that some of its rituals had by the twentieth century acquired additional Fon practices. However with the rise of Pentecostal churches in the 1990’s across West Africa, a new challenge to Egungun masquerade arose as these churches sought to demonise indigenous religions (and their pantheons of deities) as pagan and dangerous and, as such, to be vehemently rejected. Egungun has responded in elaborating a counter-narrative of localised Yoruba memories, personalised histories and ritual through public performance that upholds the ethical values of the community.

Leonce Agbodjelou explores these dynamic tensions in a major series of individual portraits of Egungun in which he confronts their “betwixt and between” quality as ancestral visitors temporarily made manifest to aid and guide the lineages to which they belong. These portraits capture both their individual personalities and quirks while marking out their power and elusiveness as liminal visitors from the world of the dead.