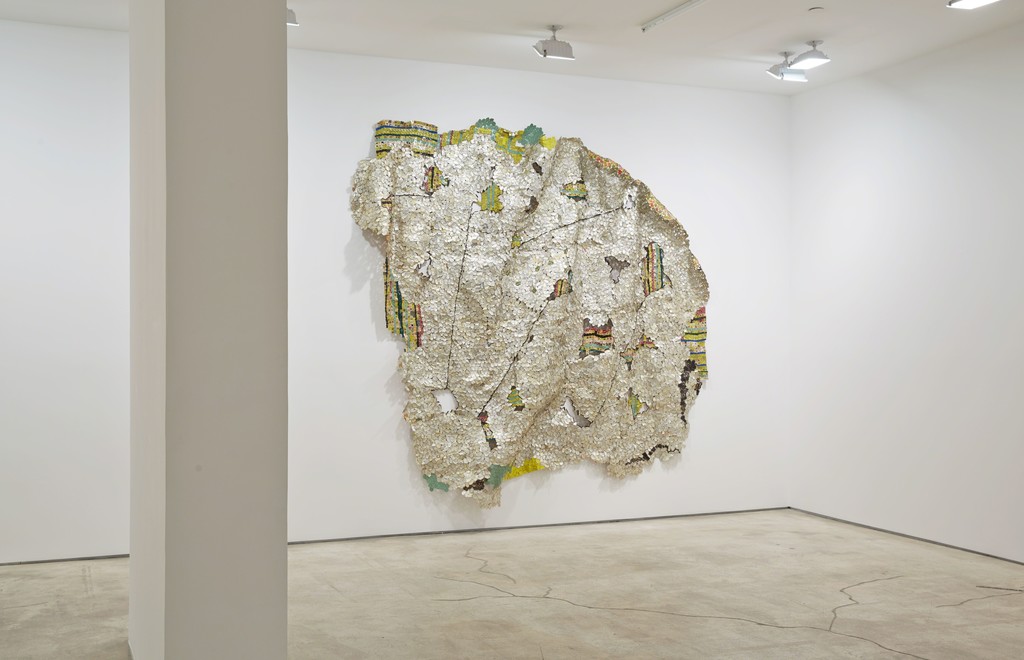 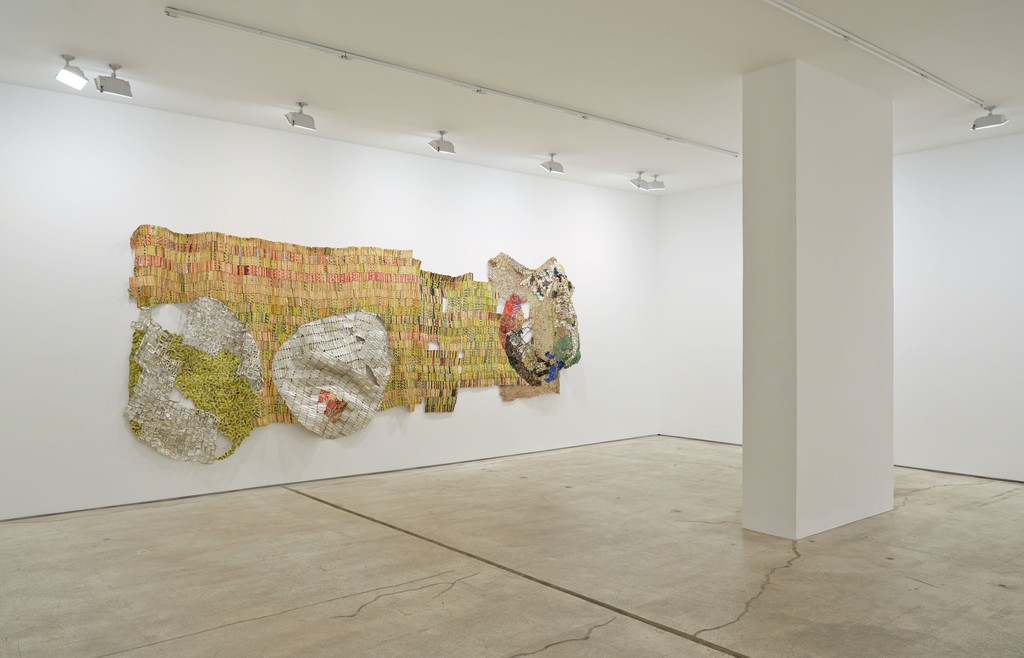 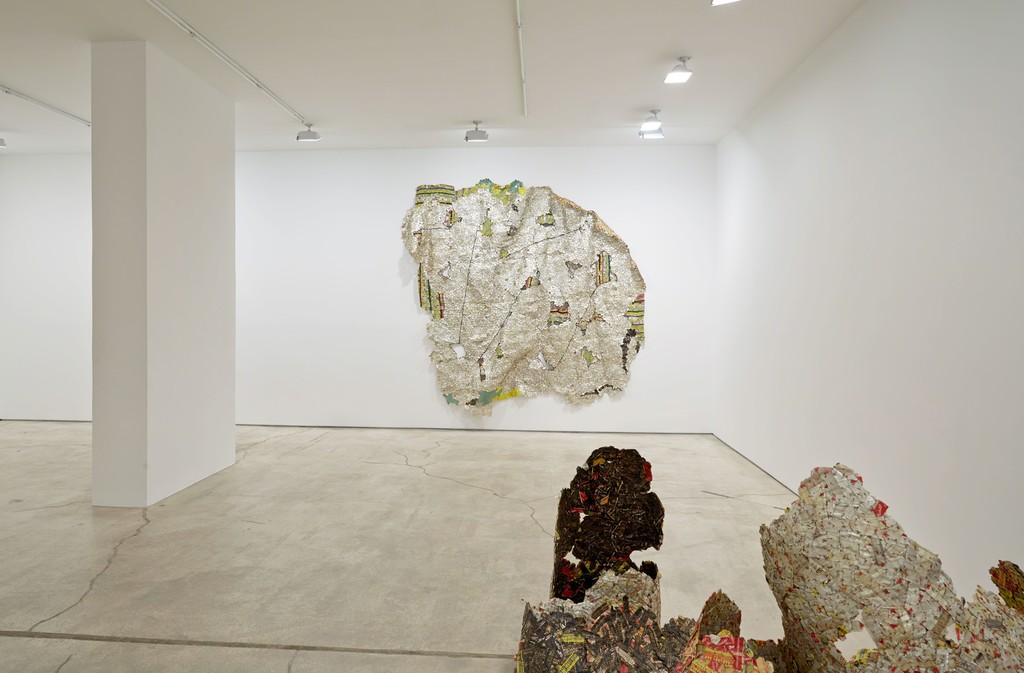 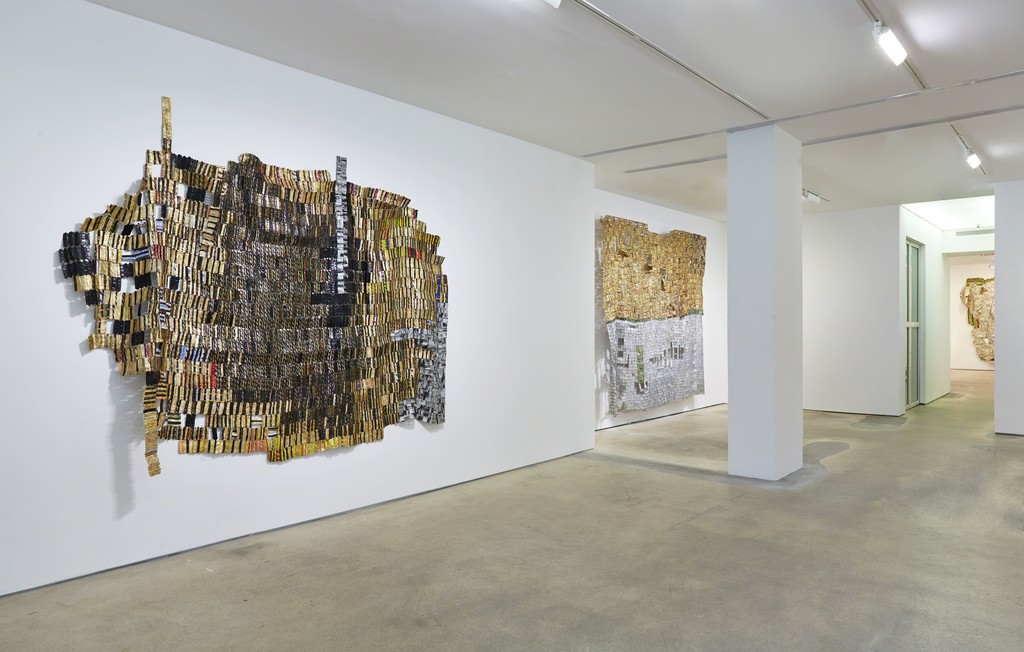 EL ANATSUI
Trains of Thought
October 18 – November 15, 2014
Opening reception: Saturday, October 18th, from 6 – 8 PM at 524 West 24th Street
Jack Shainman Gallery is pleased to announce an exhibition of new works by El Anatsui. Continuing to employ his primary medium of metal in the form of liquor bottle caps, printing plates and copper wire, Anatsui transforms the material into both draping wall pieces and three-dimensional works that hover between painting and sculpture.
Throughout his oeuvre, Anatsui has focused enormous attention on the language of his materials. Through folds and twists he pushes the metal parts beyond themselves, transforming them from microcosmic elements into sutured surfaces that are at once commanding and delicately intricate. Radical in his approach to abstraction, Anatsui circumvents traditional approaches to the picture plane through shape and dimensionality borrowed from and imposed upon, the material.
Along with his use of found aluminum and copper wire, Anatsui has worked small pieces of newspaper printing plates into his iconic hanging sculptures. First seen in Waste Paper Bags (2004) the printing plates, discarded by local newspapers, have been cut down to create the same visual effect as the folded bottle caps, but with added strength enabled by their thicker composition. When creased or crumpled, the printing plates contribute a new layer of complex texture to the work, creating both slashing disruptions across the surface or speckling it with an expressionist impasto.
With a career spanning nearly four decades, Anatsui’s transformation and interrogation of material endures throughout his practice. The new works, with their evolutions in chromatic statements and continuous shifts of form, are exquisite manifestations of the idiom he has made all his own.
El Anatsui was born in Ghana and currently lives and works between Ghana and Nigeria. Upcoming solo exhibitions include Gravity and Grace: Monumental Works by El Anatsui, at the Museum of Contemporary Art, San Diego, from March 5 – June 28, 2015. This exhibition was organized and previously on view at the Akron Art Museum, Ohio, Brooklyn Museum, New York, the Des Moines Art Center, Iowa and the Bass Museum of Art in Miami, Florida. Anatsui has been featured in international exhibitions, including the Venice Biennale (1990 and 2007) and the Paris Triennial (2012). Recent large scale public installations include Broken Bridge II, commissioned by High Line Art and presented by Friends of the High Line (2012-2013), and Tsiatsia – Searching for Connection, which was installed on the façade of the Royal Academy of Arts in London in 2013.
Anatsui is included in numerous private and public collections including the Metropolitan Museum of Art, New York; the Museum of Modern Art, New York; Centre Pompidou, Paris, France; Los Angeles County Museum of Art, California; the Bill and Melinda Gates Foundation, Washington; the Akron Art Museum, Ohio; St. Louis Art Museum, Missouri; Museum Kunstpalast, Dusseldorf; the Setagaya Museum, Tokyo, and the British Museum, London.