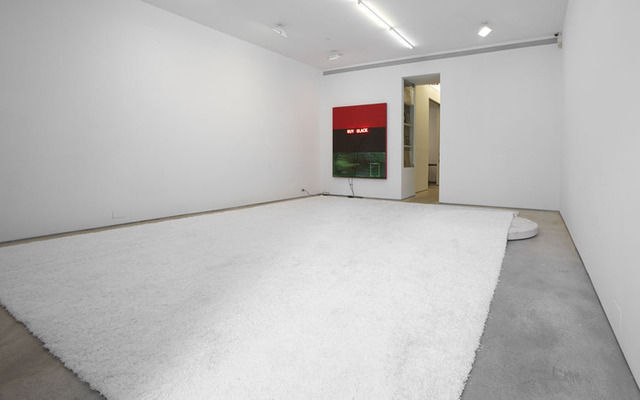 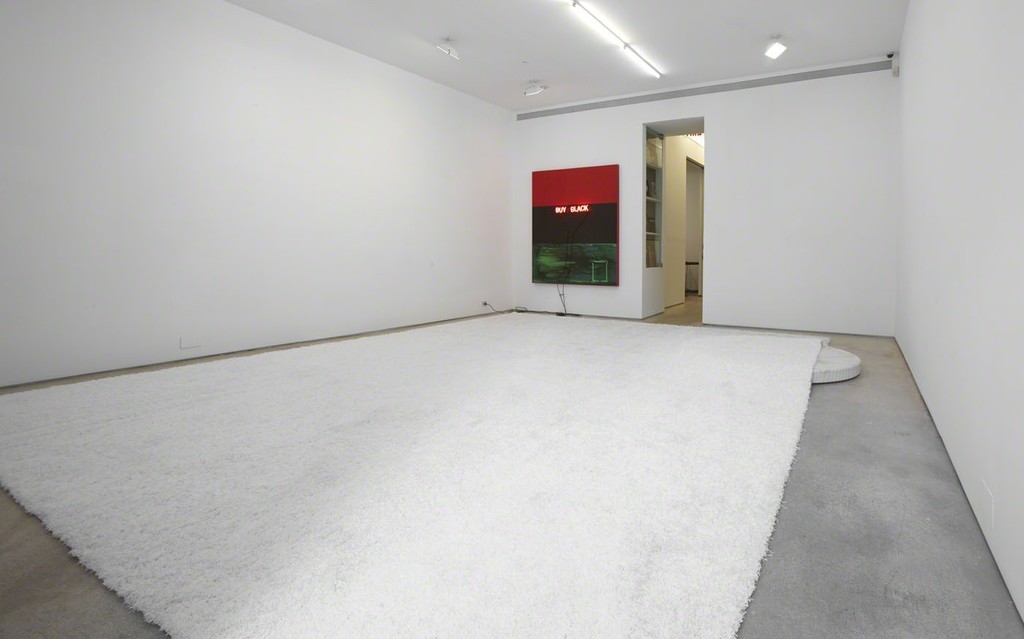 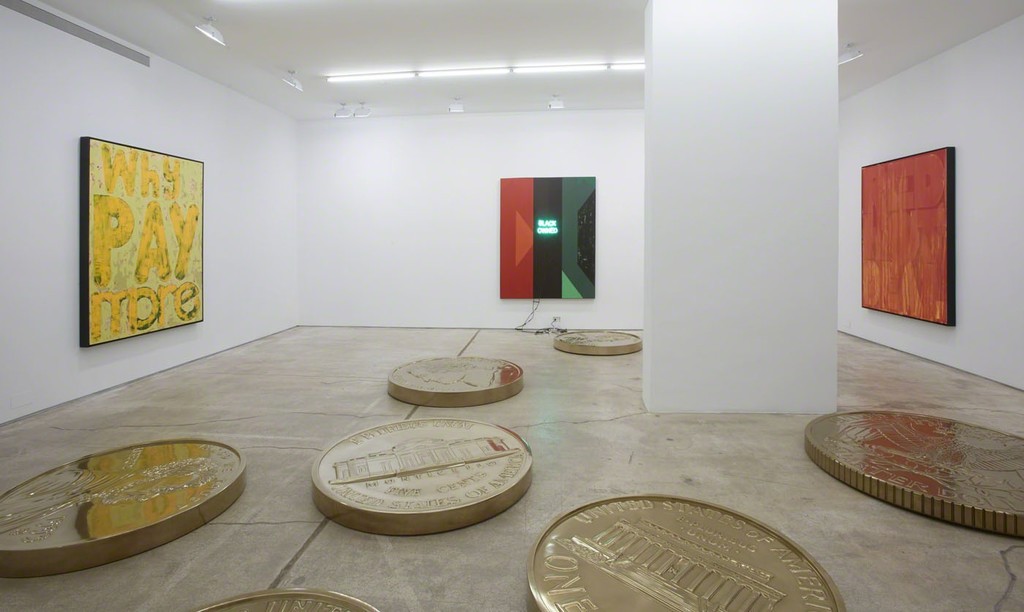 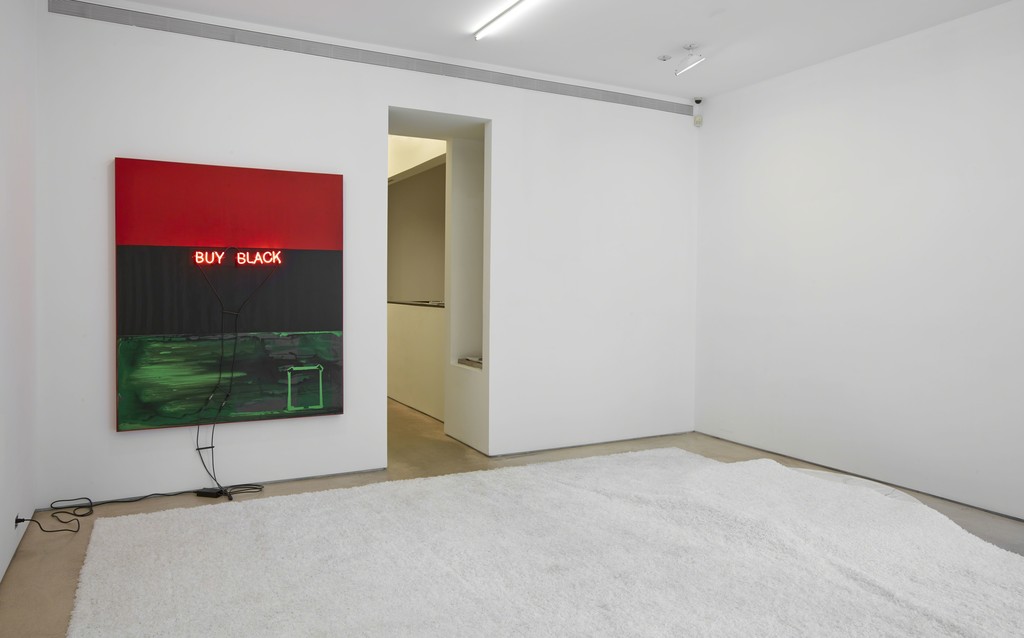 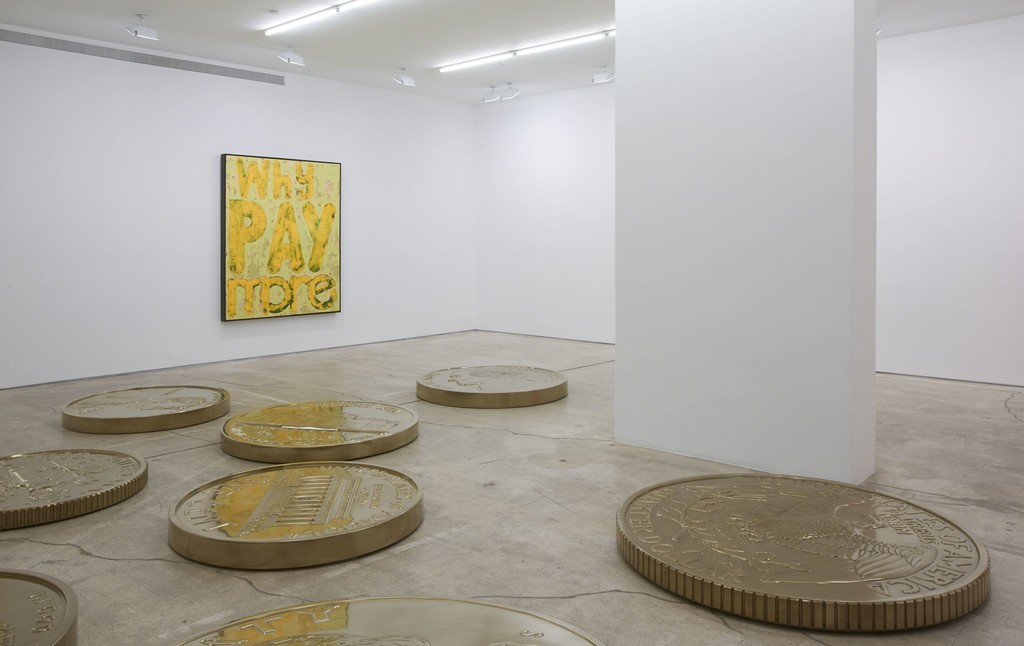 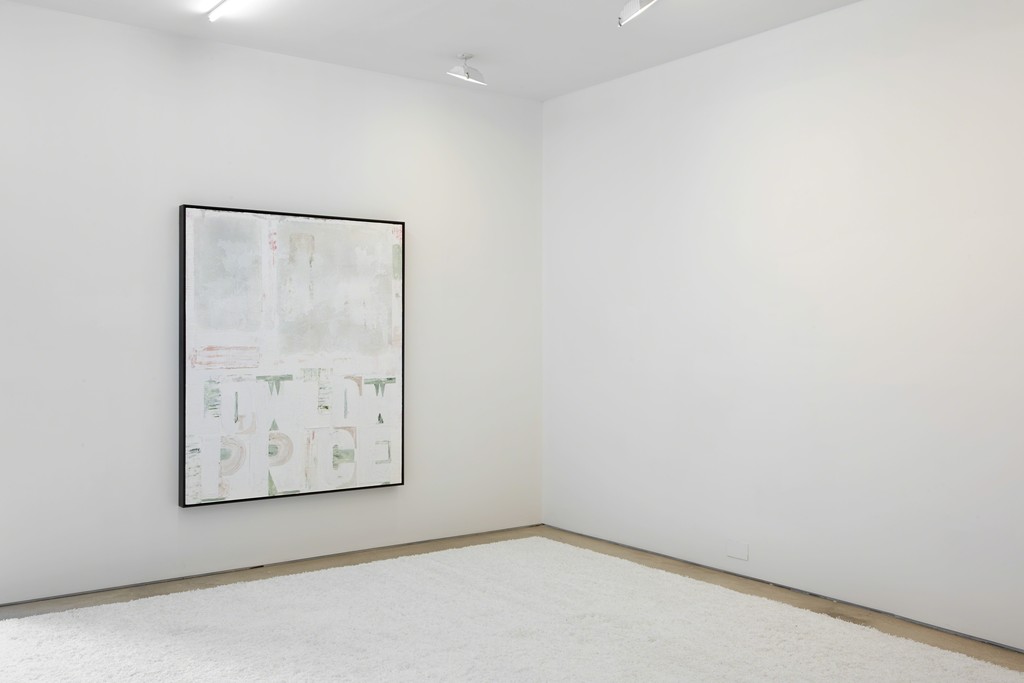 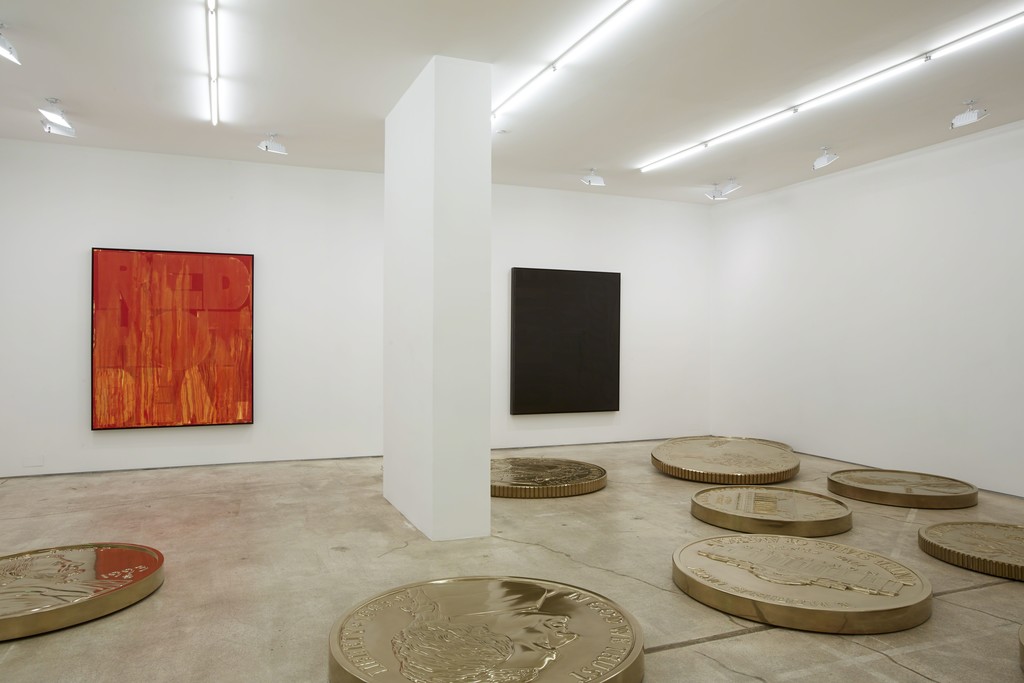 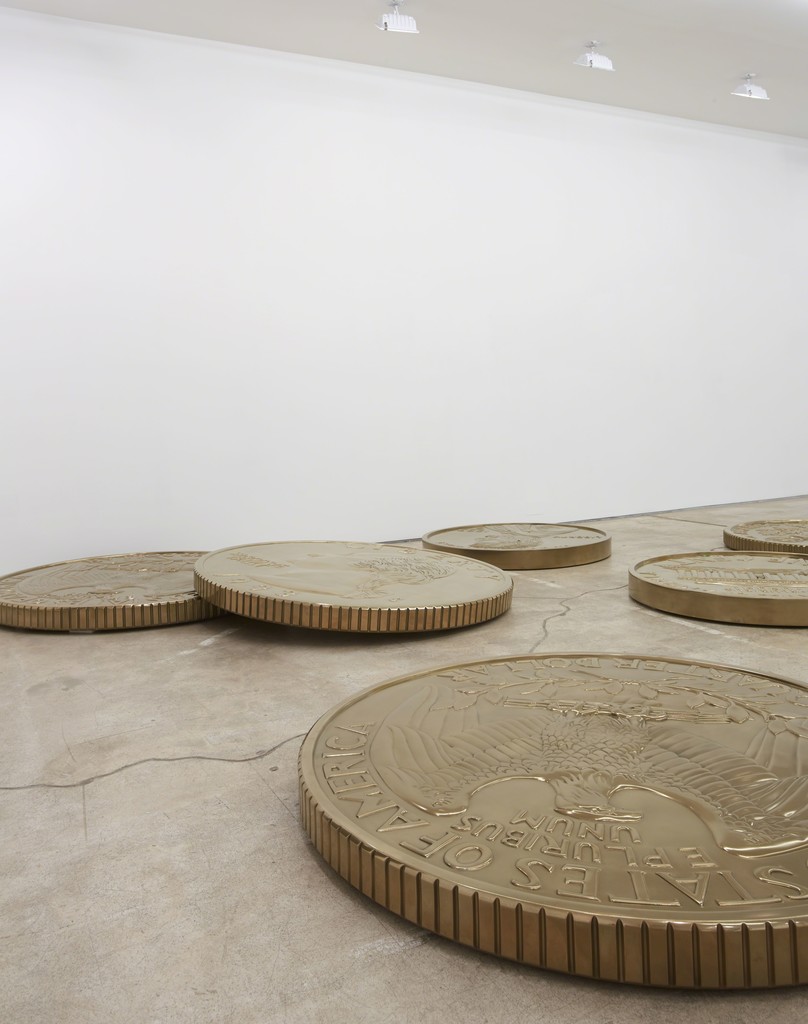 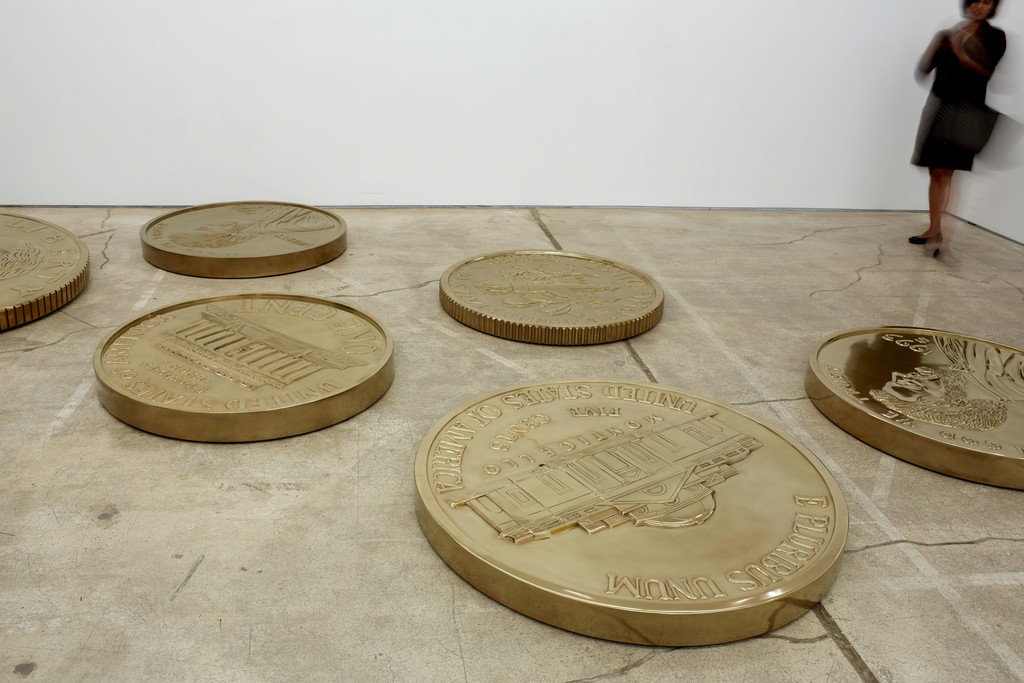 Jack Shainman Gallery is pleased to announce DOLLAR FOR DOLLAR, an exhibition of sculpture and paintings by Kerry James Marshall. Marshall is known for his figurative paintings that challenge and engage Western art history while making black identity and representation their prime subject. Marrying formal rigor and social engagement, his practice also encompasses sculpture, installation, photography and minimalist painting that strive toward a literal and conceptual black aesthetic. A radical pragmatist, Marshall recognizes the art world is not an autonomous "free" space, but is simply one component of the larger socio-economic order in which we operate. Marshall explores visibility within the canon and the consumption of culture as currency in this exhibition of recent works.

99 cent piece (One hundred thirty six thousand dollars in change) addresses value in artwork and beyond by simultaneously embodying high and low aesthetic ideals. A group of large scale coins with a flawless brass patina add up to 99 cents and lay as if haphazardly tossed on the floor. While 99 cents evokes low value, a bargain, pocket change or the ubiquitous 99-cent-stores full of cheap items, the piece itself is beautifully and expensively fabricated as referenced in the title’s parenthetical. Marshall takes out the mediating object of the Readymade and self-reflexively focuses on the money itself.
A series of paintings with similarly provocative titles including Red Hot Deal, Why Pay More, On Sale Black Friday, Black Owned and Buy Black further provide a framework for this confluence of money, power, agency, autonomy and access, explored through a linchpin of language and symbols. Marshall creates an alternate archive that acknowledges the real-politic of the art making enterprise.
Kerry James Marshall lives and works in Chicago. Kerry James Marshall: In the Tower is currently on view at the National Gallery of Art, Washington, DC, through December 7, 2013. Upcoming solo exhibitions include Kerry James Marshall: Painting and Other Stuff at the Museum van Hedendaagse Kunst Antwerpen, Belgium, October 4, 2013 – February 2, 2014. The exhibition will travel to the Kunsthal Charlottenborg, Denmark; Antoni Tapies Foundation, Barcelona and the Museo Nacional Centro de Arte Reina Sofia, Madrid.