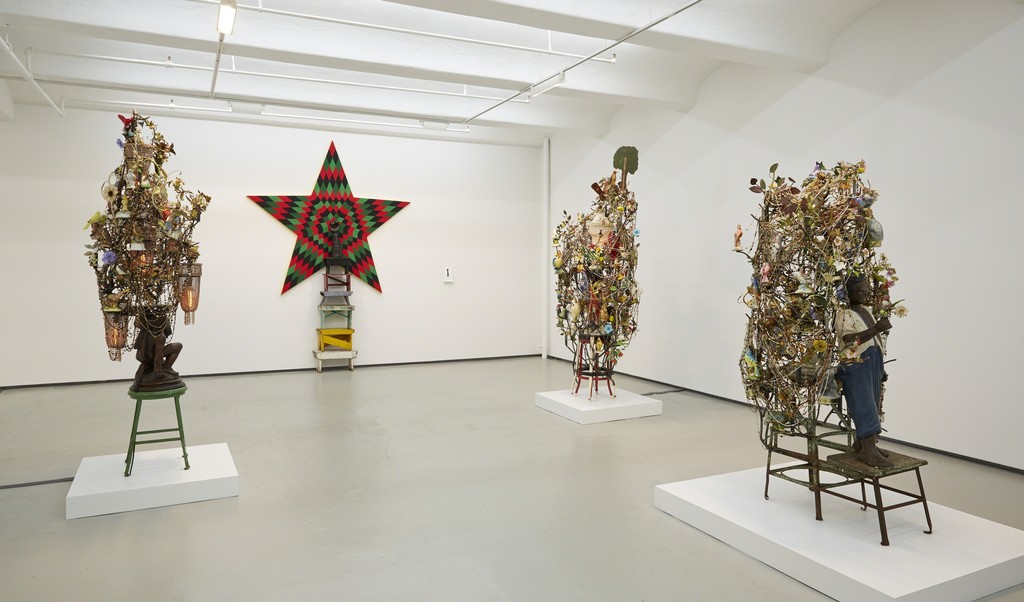 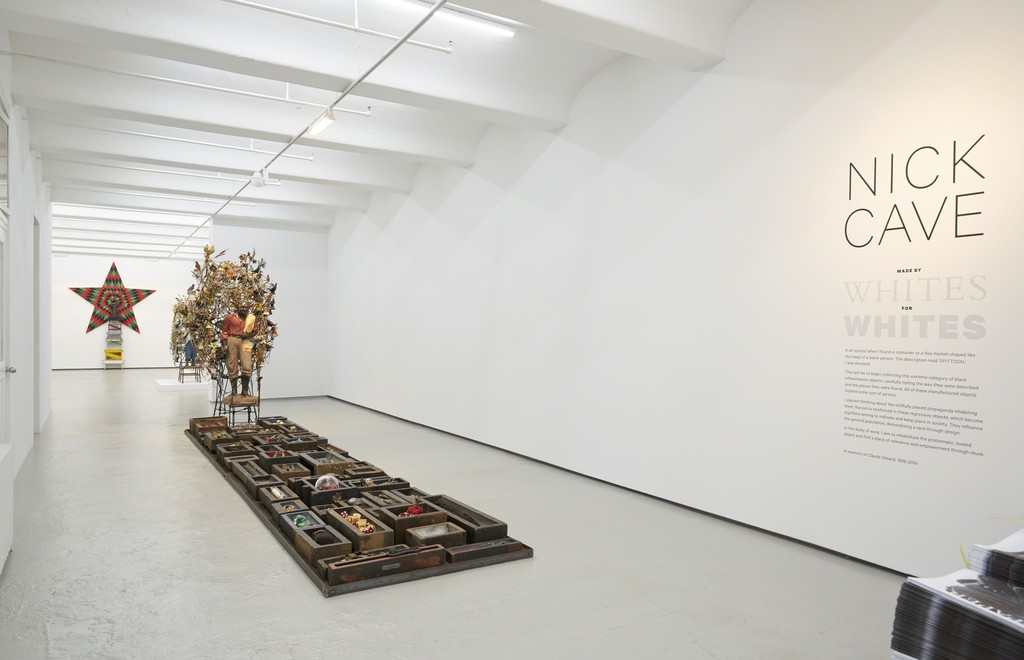 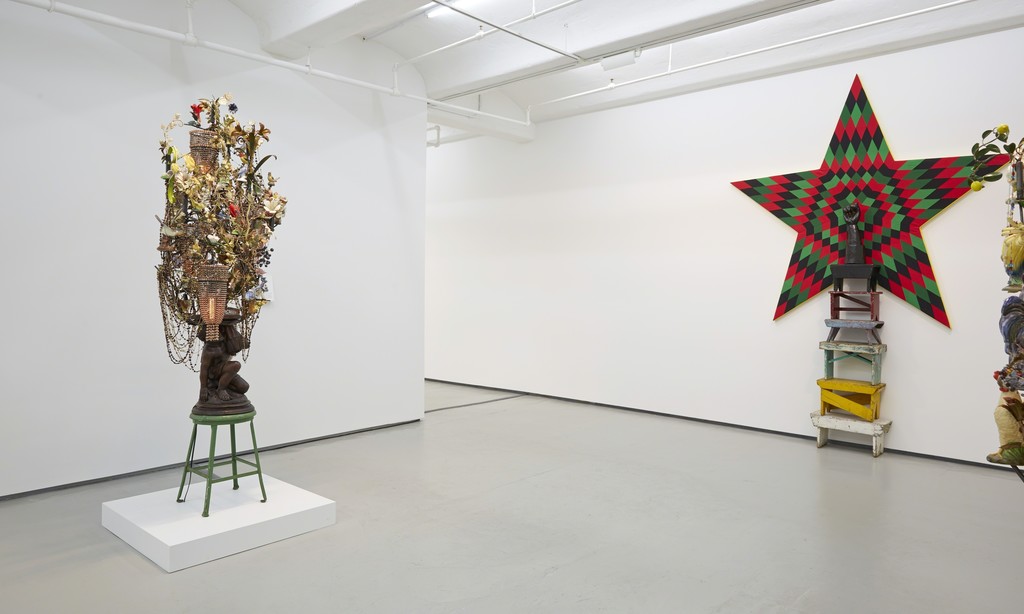 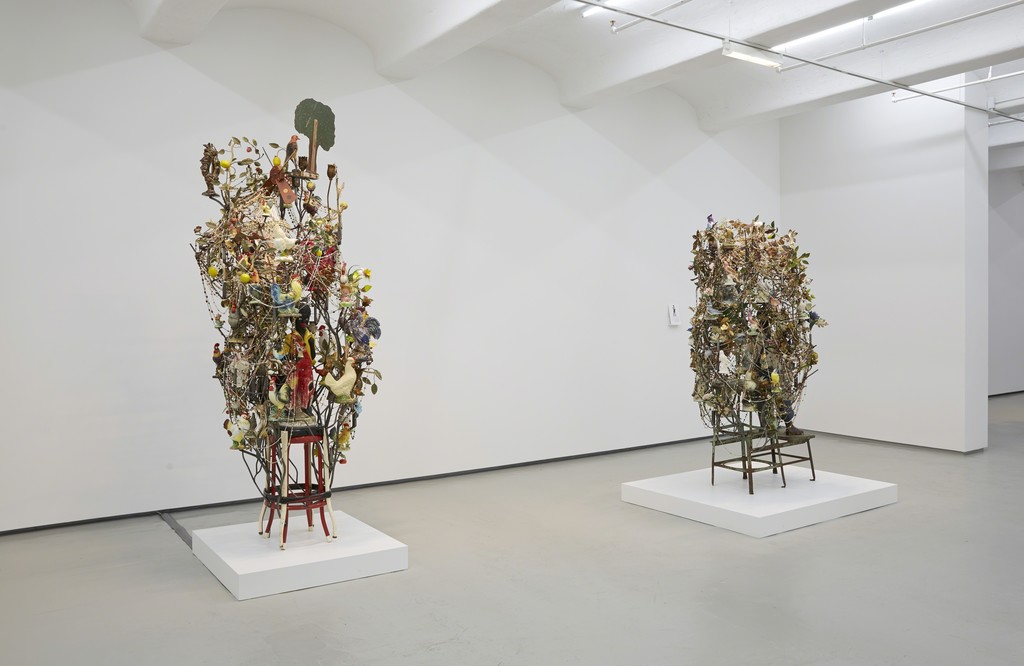 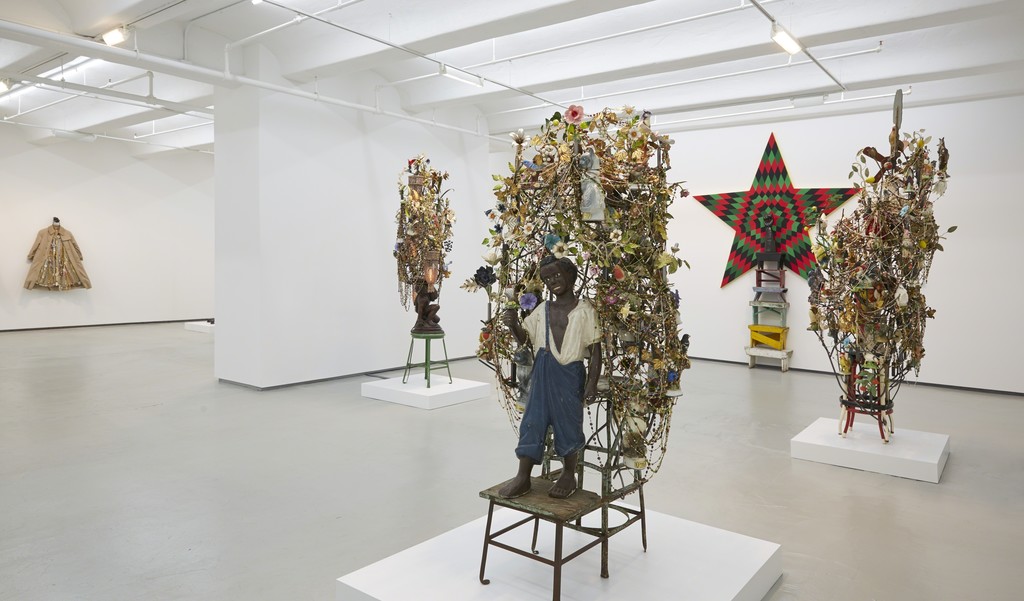 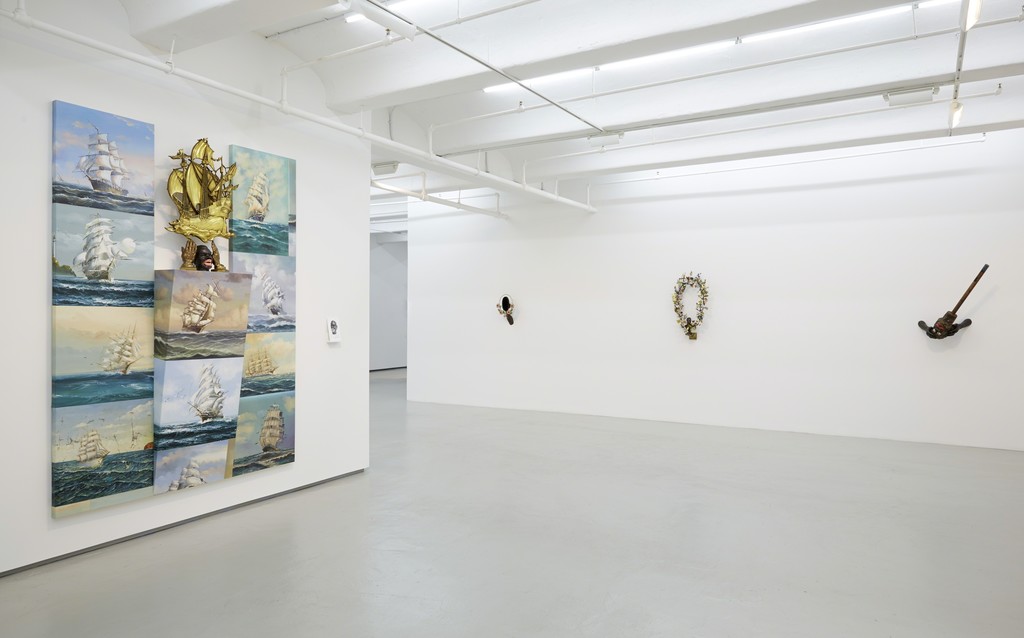 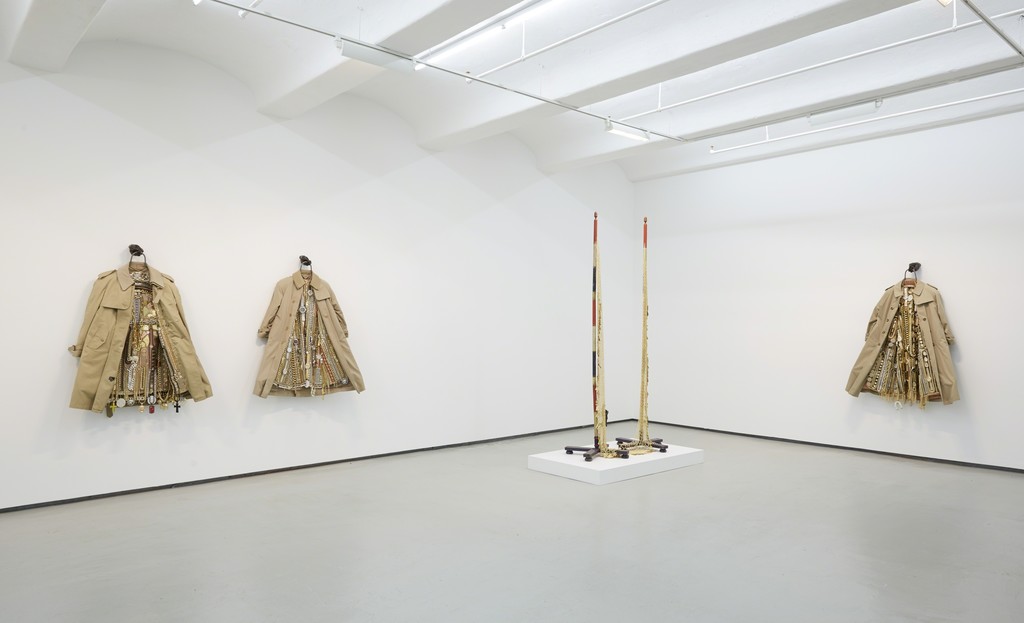 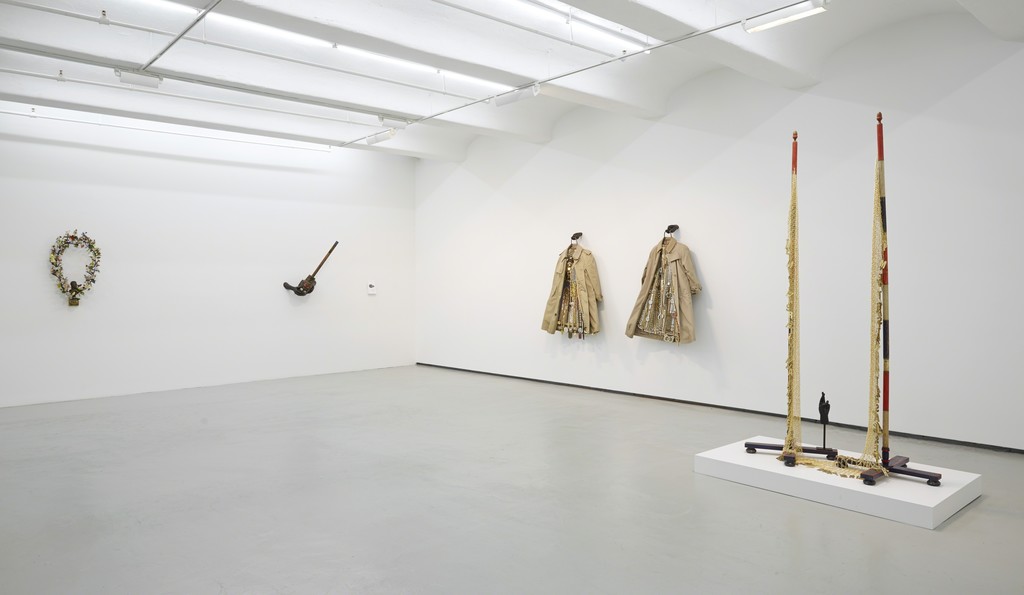 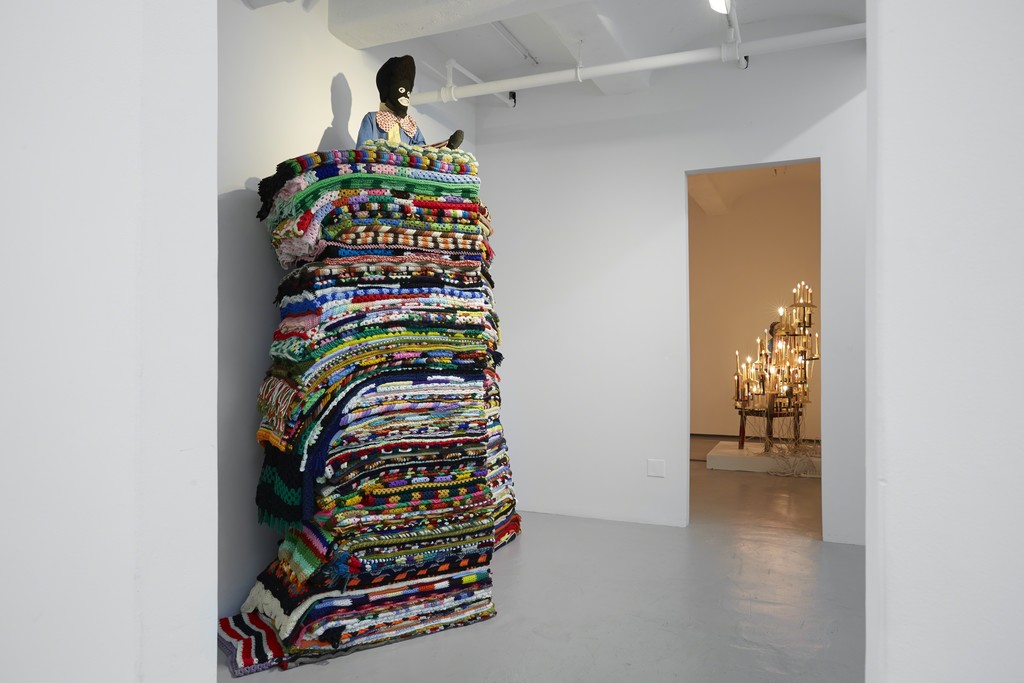 New York—Jack Shainman Gallery presents an exhibition of new work by Nick Cave at the gallery’s two Chelsea locations, opening Thursday, September 4th from 1-6 PM. Made by Whites for Whites and Rescue will be on view through Saturday, October 11, 2014 and will be accompanied by special programming. The two-part exhibition will be the artist’s fourth with the gallery.

On view at 524 West 24th Street will be Cave’s body of work Rescue. The series comprises sculptures that incorporate found ceramic dogs sitting on furniture within elaborate grottos or dreamlike dens. Dogs have historically been associated with loyalty, class, breed, commitment, and protection. More recently, the term “dawg” has played a role in hip-hop culture as a moniker for brotherhood, respect, and power.
In the Rescues, Cave focuses on a single canine that has quite literally been rescued from destruction, very much like an adopted pet. These dogs become the benevolent guardians of their self-contained worlds, focusing the spotlight on the forgotten and discarded. A Doberman lounges on a gold sofa while a small dog fiercely guards a wishbone on a shoeshine table. The armatures that envelop these animals correspond with large-scale wall based bas reliefs dripping with crystals, beads, and metal flowers.

Many of the works included in Made by Whites for Whites, on view at 513 West 20th Street, have formal similarities to the Rescues in that central found objects are presented within elaborate armatures built up with items from Cave’s familiar lexicon of ceramic birds and flowers, porcelain fruit, and copies of Capodimonte. However, the content is quite different. In Made by Whites for Whites, racially charged historical objects anchor the works such as the stereotypical representation of a black man with dark skin, big red lips, and white eyes in Untitled, 2014, or the Golliwog costumed mannequin in King of the Hill, 2014. These were once commonplace caricatures that infantilized and dehumanized the African American population.

This project began when Cave found a container at a flea market shaped like the head of a black man and labeled ‘Spittoon.’ He was shocked and began, “to rehabilitate the problematic loaded object and find a place of reverence and empowerment through reuse.” These remnants of another time hold a strange place in the public consciousness. They are too important to be discarded but too painful to be widely displayed. They persist at a distance across the country in the cultural gray area of flea markets and antique stores, potently saturating the American present. Cave treats these items with compassion while forcing the viewer to confront this problematic genre of mass-produced and widely disseminated collectibles. Following the artist’s unveiling of this new direction in his summer exhibition at Jack Shainman Gallery’s newly launched 30,000 square foot exhibition space, The School, in Kinderhook, New York, these two exhibitions expand the breadth and content of Cave’s oeuvre while remaining inextricably linked to the reclaiming of found objects that has always been at the core of his work.